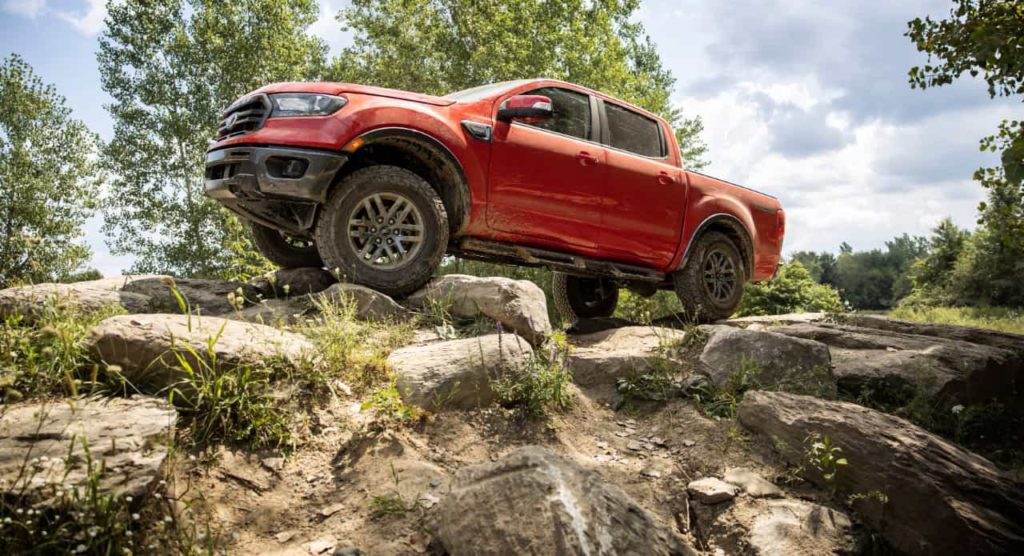 The Ranger Tremor off-road package isn’t the Ranger Raptor we’ve all been screaming we want, but it is the most off-road capable factory Ranger on offer in North America yet. The Tremor package for the 2021 Ford Ranger gets you off-road suspension, 32-inch aggressive all-terrain tires, more recovery points, underbody armor, a rear locking differential, and an appearance package inside and out. We get all that in a truck that doesn’t lose any of its payload or towing capability. The 2021 Ford Ranger Tremor off-road package is sure to turn some heads and be a ton of fun.

Rangers with the new Tremor off-road package will start to roll off the assembly line of Ford‘s Wayne, Michigan plant in early 2021. The package will set you back $4,290 and can be optioned on mid-XLT and high-Lariat 2021 Ford Ranger trucks in the SuperCrew 4×4 configuration.

Another step up the off-road capability ladder from the FX4 off-road package, the Tremor is the new off-road top dog in the Ford Ranger lineup, at least in North-America. While the F-150 and the Ranger in much of the rest of the world get the real top dog off-road Raptor model, the Ranger in North America isn’t yet available in the coveted Raptor format. While that makes us sad, Ford has thrown us a bone with the Tremor package for 2021.

One aspect of the Raptor is available on the Tremor package, which is a wider track width. The 2021 Ranger Tremor package gets redesigned front knuckles and 32-inch General Grabber A/TX all-terrain tires. Combined with new 17-inch Magnetic-painted wheels the truck gets a slightly wider stance for more off-road stability. 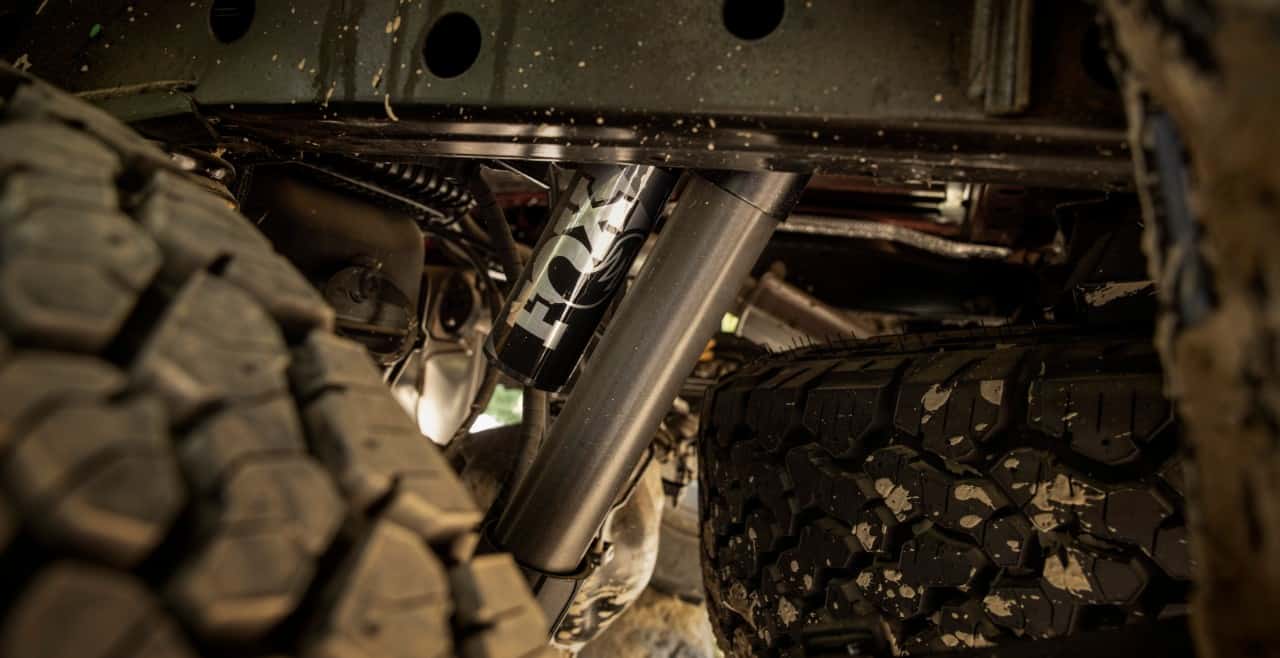 On the suspension front, the big news is the FOX 2.0 monotube dampers with rear piggyback reservoirs and hydraulic rebound stops. Along with front and rear off-road tunned springs these shocks provide better off-road composure while keeping body roll to a minimum on road. New multi-leaf rear springs allow for increased wheel travel. The roll bars have also been softened to allow for a smoother ride over rough terrain. Combined, this new suspension setup provides 6.5-inches of front suspension travel and 8.1-inches of rear travel.

Tremor increases the approach angle by 2.2-degrees over the base Ranger SuperCrew 4×4, to 30.9-degrees. Departure and beakover are also improved, by .1-degrees and 2.7 degrees respectively, to 25.5-degrees and 24.2-degrees. All those numbers just mean that along with the .8-inch taller ground clearance, now 9.7-inches, the 2021 Ford Ranger Termor can clear more obstacles off-road. 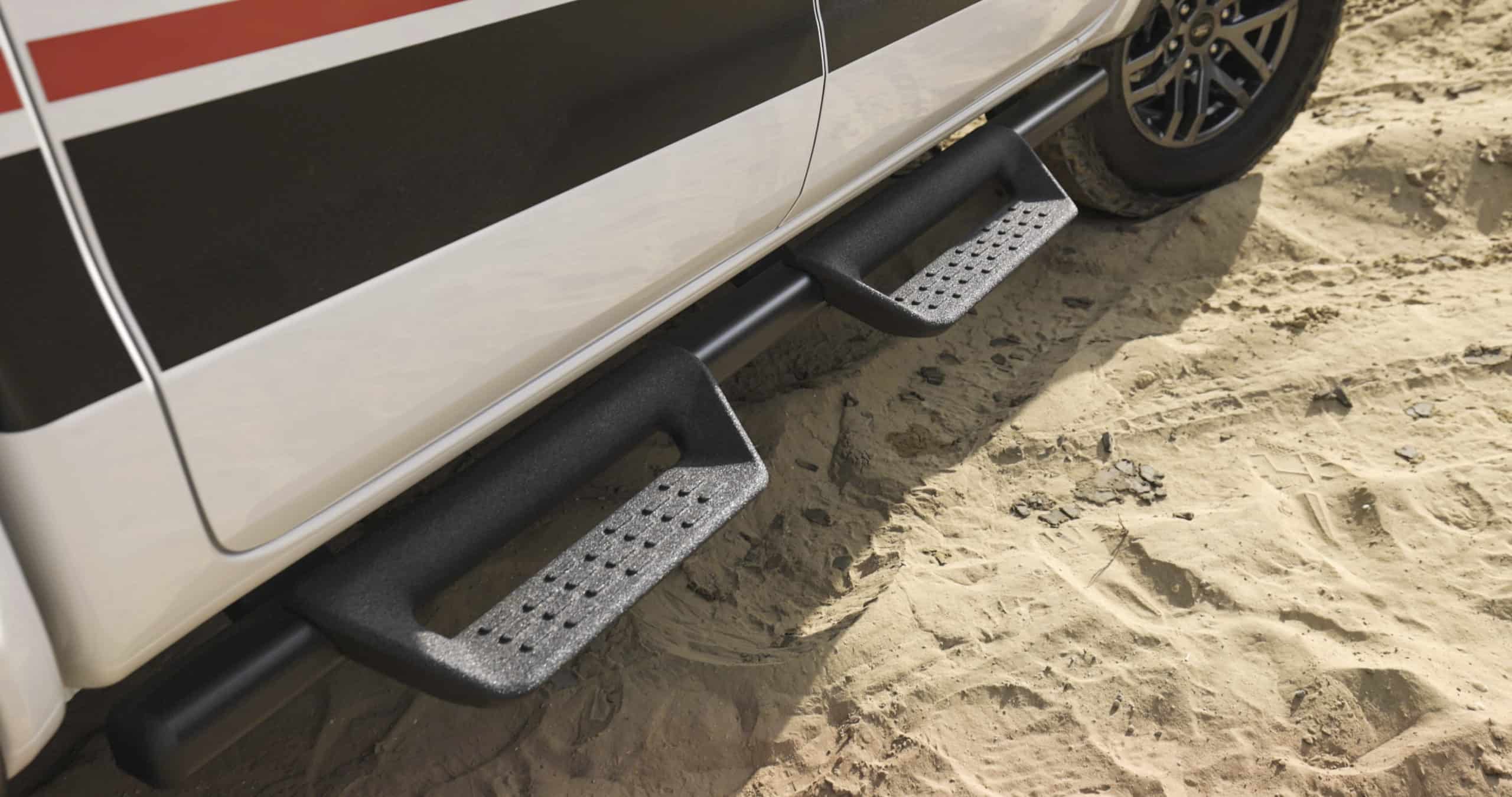 On top of the improved ride, clearance, and better tires the 2021 Ford Ranger Tremor off-road package also gets you a host of new hard goods. In addition to the two standard front recovery hooks, the Tremor adds two to the rear. Underneath you get frame-mounted steel skid plates.

Due to the wider track width and bigger tires new wider fender flares are installed on the Ranger Tremor. The Tremor also comes with new hoop steps, which not only make it easier to get into the taller truck but also loop good and don’t impede ground clearance all that much. 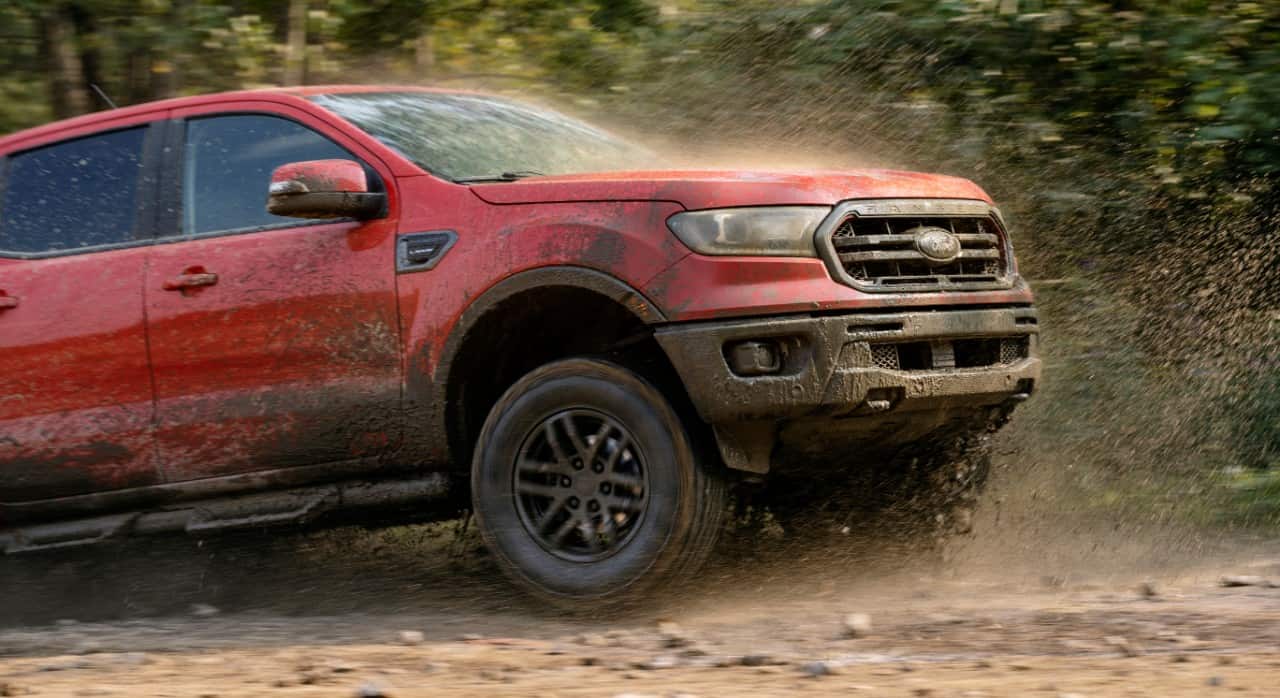 Many of the Tremor upgrades to the Ranger are all about improved traction. In the rear you get an electronically locking differential. This Ranger also gets Ford’s Terrain Management System, which has four drive modes and Trail Control. Ford also says the traction control system has been “recalibrated for improved acceleration and traction in gravel, so customers can punch it in a washout with gusto.” Full gas and a loose surface can be a good time! 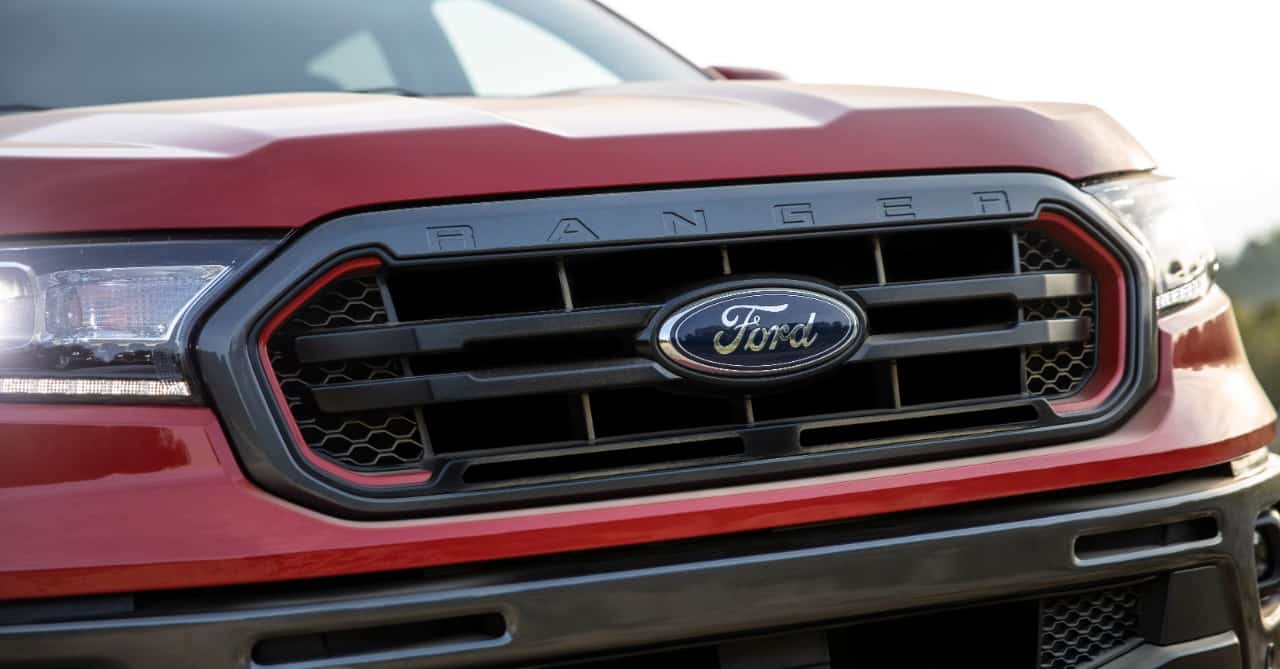 The Tremor is a functional off-road package, but it also adds some aggressive styling. The grille gets a Magnetic-painted surround, which matches the wheels. The grille also gets black bars across the middle and red accents in the corners. Inside the Ranger Tremor, you get front seats with suede inserts and Tremor logos stitched into the seatbacks. 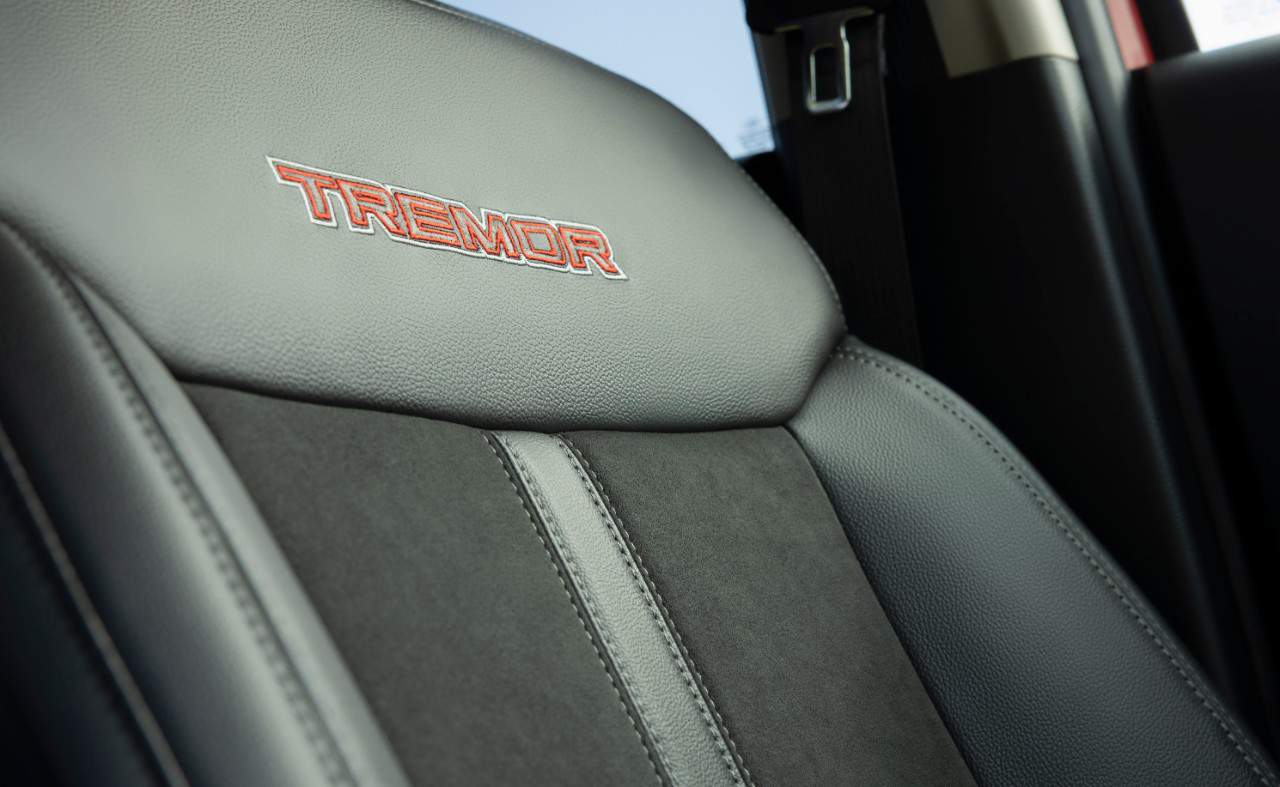 The optional Tremor graphics package adds some red and black stripes to the hood and sides of the truck. While the hood stripes work with the body lines well and tie in the red and black accents in the grille, the side stripes look a bit dated and don’t look all that well thought out. Luckily, these graphics are an opinion, so you can take it or leave it based on your personal tastes. 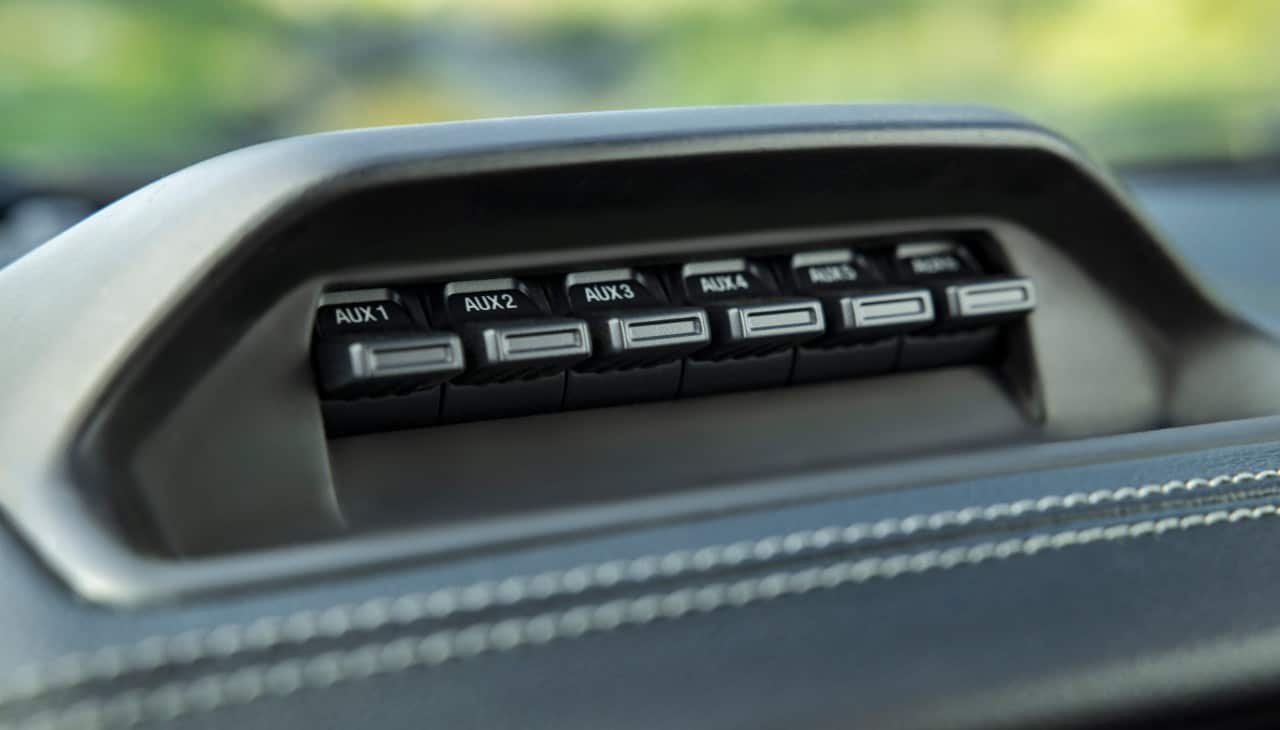 A super functional accessory found on many Ford F-150 models is an OEM accessory switch system. This system is now available on the Ranger, and comes with the Tremor package. You get a dash-mounted six-switch pod to run all your off-road accessories, like winches, lighting, air compressors, and more.

More off-road prowess with all the same on-road capabilities. While the Tremor off-road package adds off-road chops to the Ranger, it doesn’t impair on-road ride, payload (1,430 lbs) or towing capacity (7,500 lbs). You still get the 270 hp and 310 lb.-ft. 2.3L EcoBoost backed by a 10-speed automatic that we already love in the Ranger. Sadly the Tremor package isn’t an engine performance package, but that is something we’d expect in the Ranger Raptor at some point.

Can the 2021 Ford Ranger Tremor compete against the other off-road-oriented mid-sized trucks on the market, the Chevrolet ZR2 or Toyota Tacoma TRD Pro? We’d wager that it can hold its own, but will fall short in a few key areas. Think suspension, tire size, front locker, available accessories, and the like. With that said, the Ranger is building big aftermarket support and the Tremor is an impressive starting point for a quality off-road truck build, and a great package for 99-percent of mid-size truck buyers who go off-road occasionally.

Check with your local dealer about getting in line for your own 2021 Ranger Tremor edition, and stay up to date with all things Ford Ranger at Ford.com.