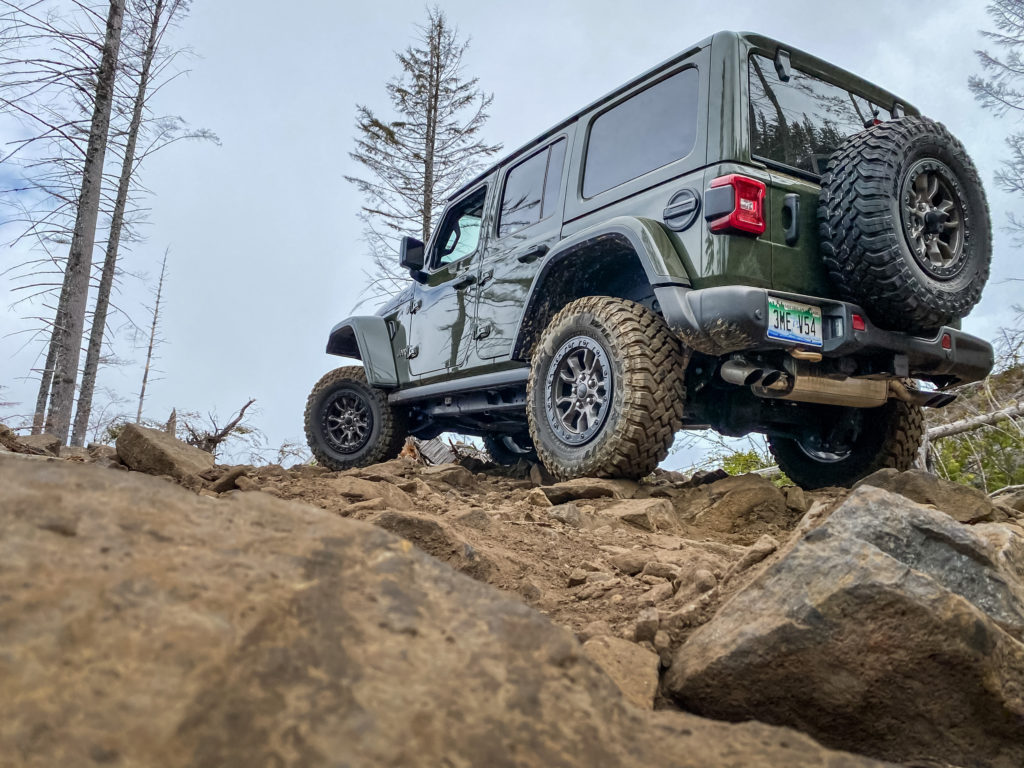 It took some time for Jeep to bring to market what we’ve all been begging for, but the Hemi-powered Wrangler is finally here. Sure the aftermarket has been servicing this desire for over a decade now, but never did it come at this price point or with a factory warranty. After a week of playing on-road and off in the 2021 Jeep Wrangler Rubicon 392 we can say that Jeep delivered a truly impressive package.

Deciding if you’d want to live with the Rubicon 392 every day is a whole different question, however.

We have to first get the elephant out of the room, the price. While less expensive than an aftermarket engine swap, the Wrangler 392 starts at a cool $73,500. Add in the destination charges, some nice paint, a tow package, both a hard and soft top, an off-road camera, and a few other accessories and our review vehicle came in at $78,565. 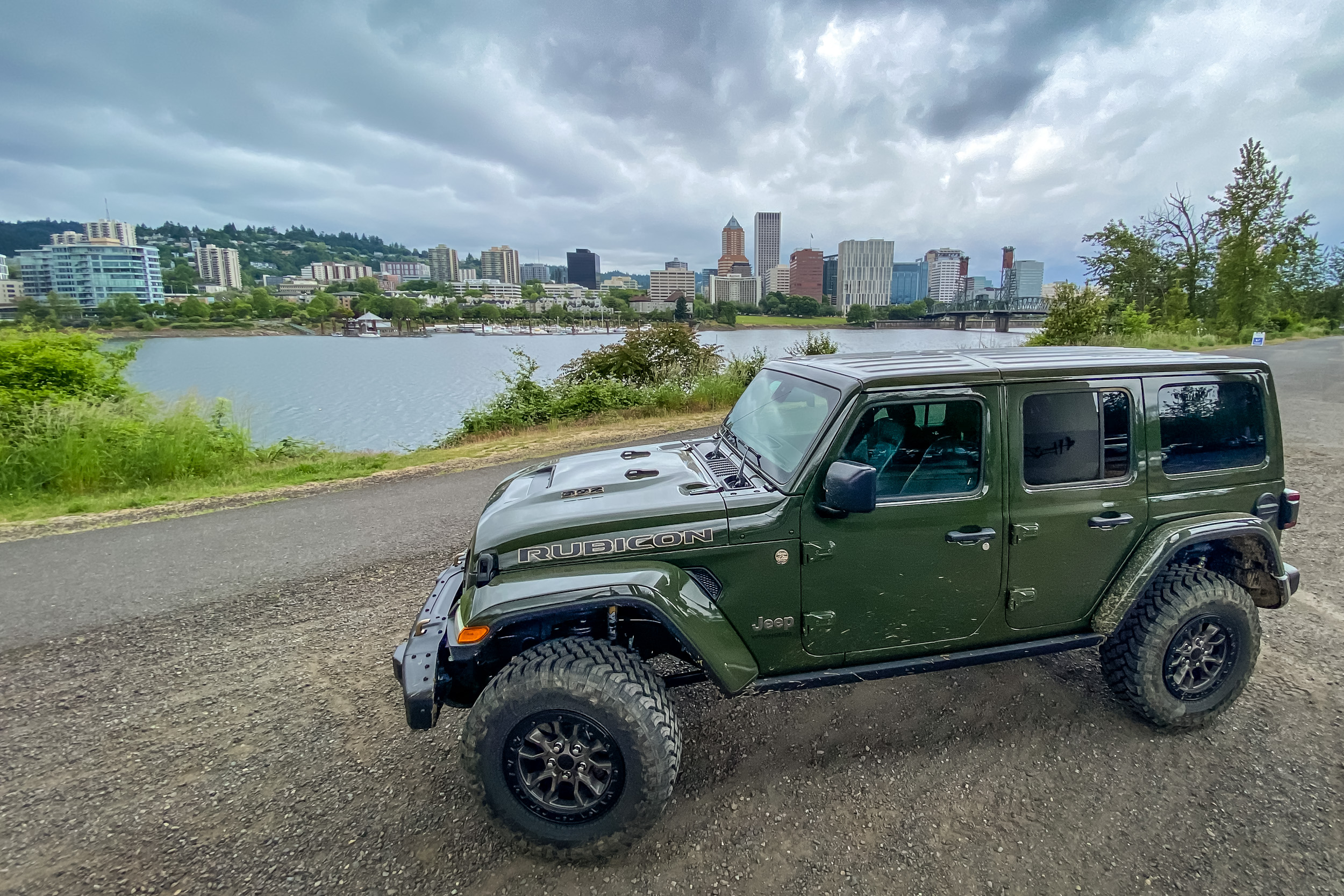 A super basic 4-door Rubicon starts at $42,500. I used Jeep’s online configurator to build out a V6 eTorque Rubicon to as near a spec as possible to the Rubicon 392 review model that I had. The price came out to $65,885. That means that the Hemi upgrade (with all the brake, hood, etc… upgrades) will run you over $12,000. That’s not an insignificant price bump!

That big price tag on the Rubicon 392 is more than a big engine though, as the Wrangler Rubicon 392 is packed with top-spec luxury and off-road capability features as standard. 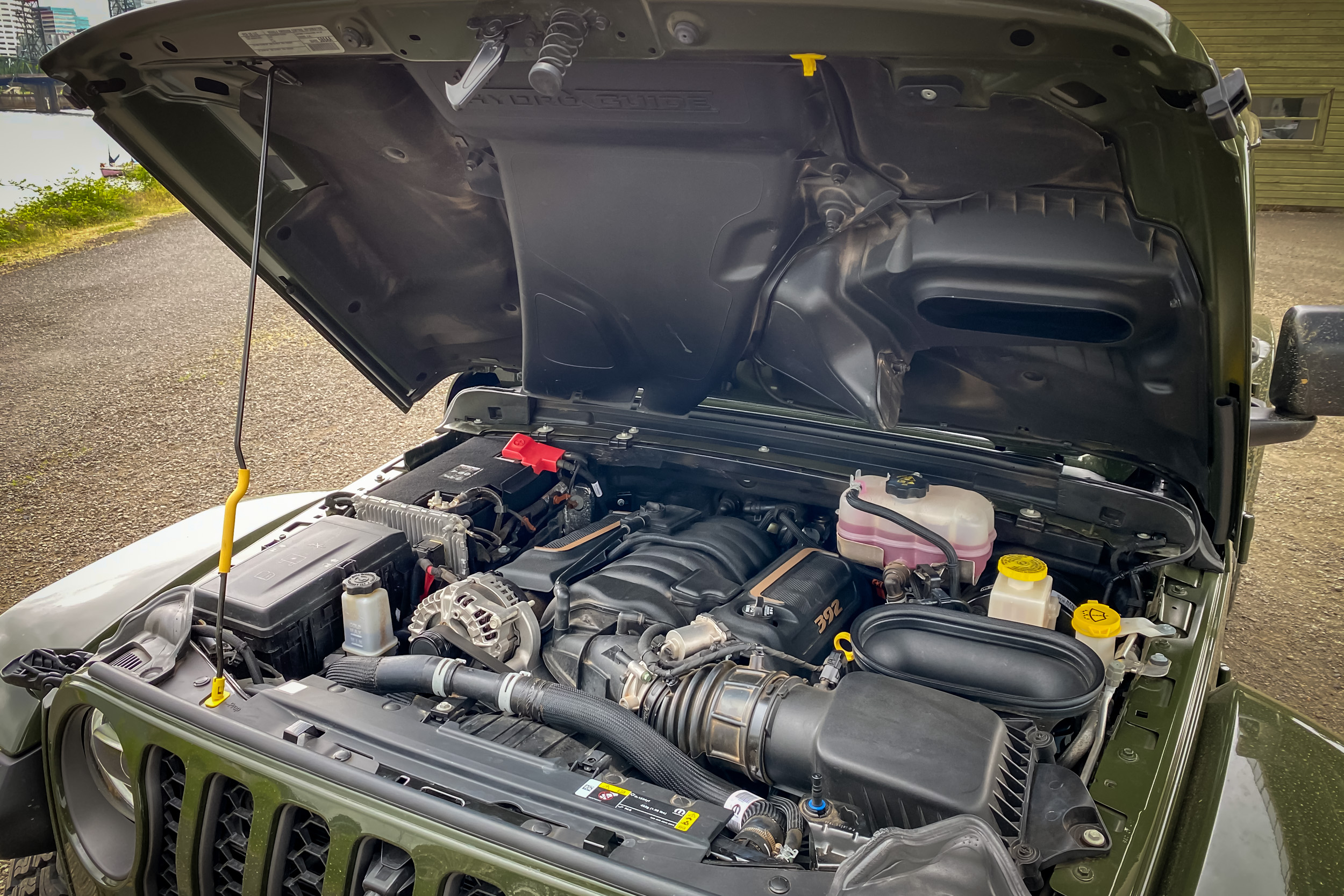 But first, that engine! The 2021 Rubicon 392 is the most powerful and quickest Wrangler ever. With a massive 6.4L Hemi V8 under the hood, this Jeep can hit 60 mph from a standstill in just 4.5 seconds (1.5-3 seconds faster than the other Wrangler models). A 13-second flat quarter-mile time ain’t too shabby either!

While the Wrangler Rubicon 392 is a bit of a brick in shape and not a lightweight – 5,103-pound curb weight (about 646-pounds more than a V6 Rubicon) -, with 470 hp and 470 lb.-ft. of torque on tap, its speed is little surprise. It’s a very rare thing that such an off-road capable machine is this fast though. This Jeep still has body-on-frame construction, solid axles, 33-inch MT tires, skid plates, rock rails, selectable lockers, a remote sway bar disconnect, and more.

The Rubicon 392 also has the ‘Hydro-Guide Air Induction System’ hood. This big burly hood offers a functional hood scoop that is used as a cold air intake and separates water from the intake when traveling in wet conditions. While I love the impressive functionality of this hood design, I must admit that the styling isn’t my favorite.

One thing the aftermarket usually forgets when upgrading power and adding weight is that the vehicle also needs to stop well. Jeep luckily didn’t forget this and upgraded the braking system on the Rubicon 392 to cope with the mass and power. I found the brakes to be super confidence-inspiring and offer good pedal feedback. 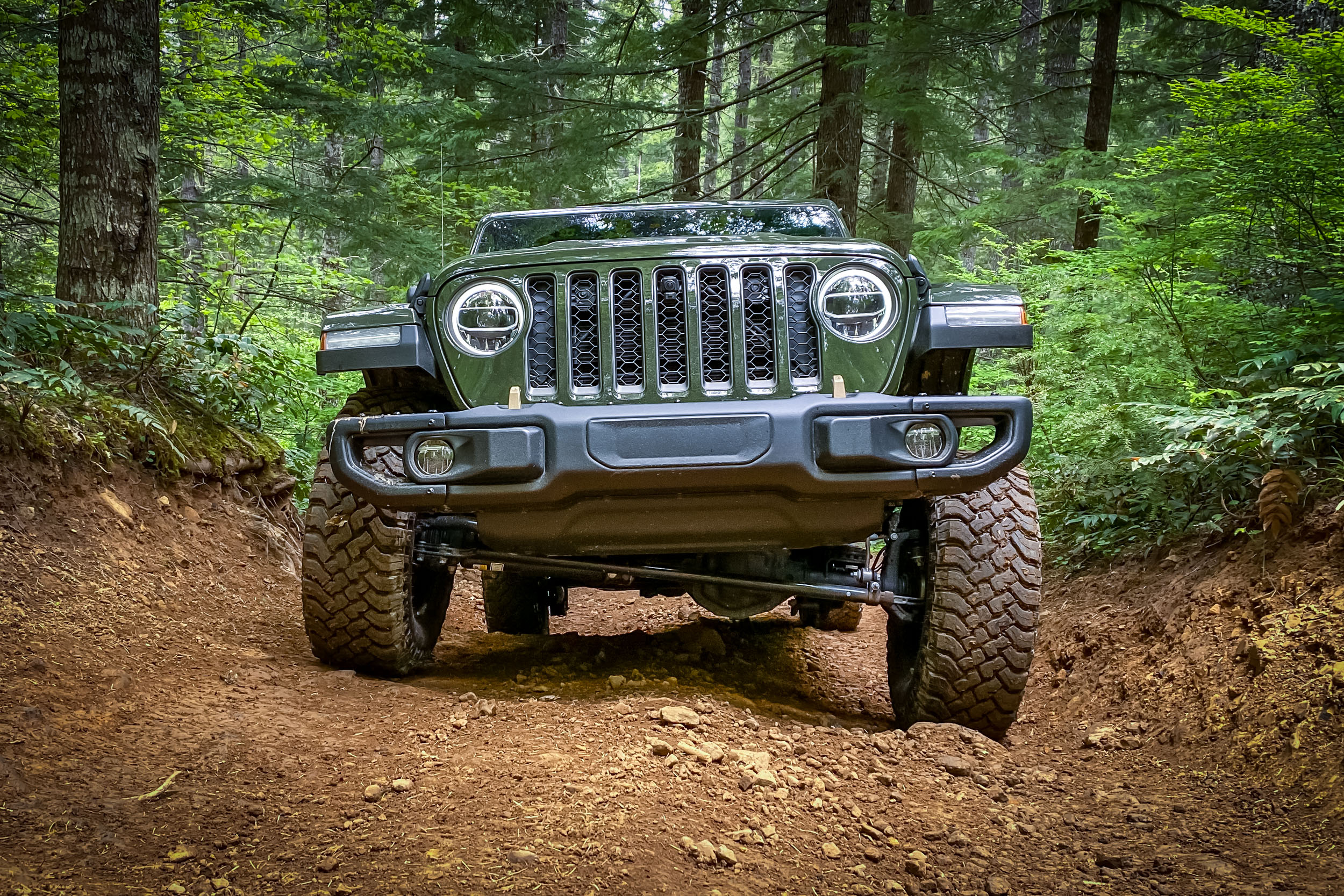 You aren’t going to buy the Rubicon 392 for fuel economy. For that you’ll buy the new Wrangler 4Xe PHEV.

The big 6.4L Hemi in the 392 guzzles dino juice at an impressive rate, and requires premium fuel. It is EPA rated at 14 mpg combined, while I got 11.4 mpg with my heavy foot during testing.

The 392 retains the same 21.5-gallon gas tank found in most Wranglers, so the range will be reduced. Expect about 300 miles range on a single tank, where a V6 mild-hybrid Wrangler will get you about 400 miles and the EcoDiesel Wrangler over 500 miles.

It’s really hard not to drive this thing with a heavy foot and enjoy all the noises it makes out the tailpipe, so don’t expect to even get 14 mpg out of this machine. 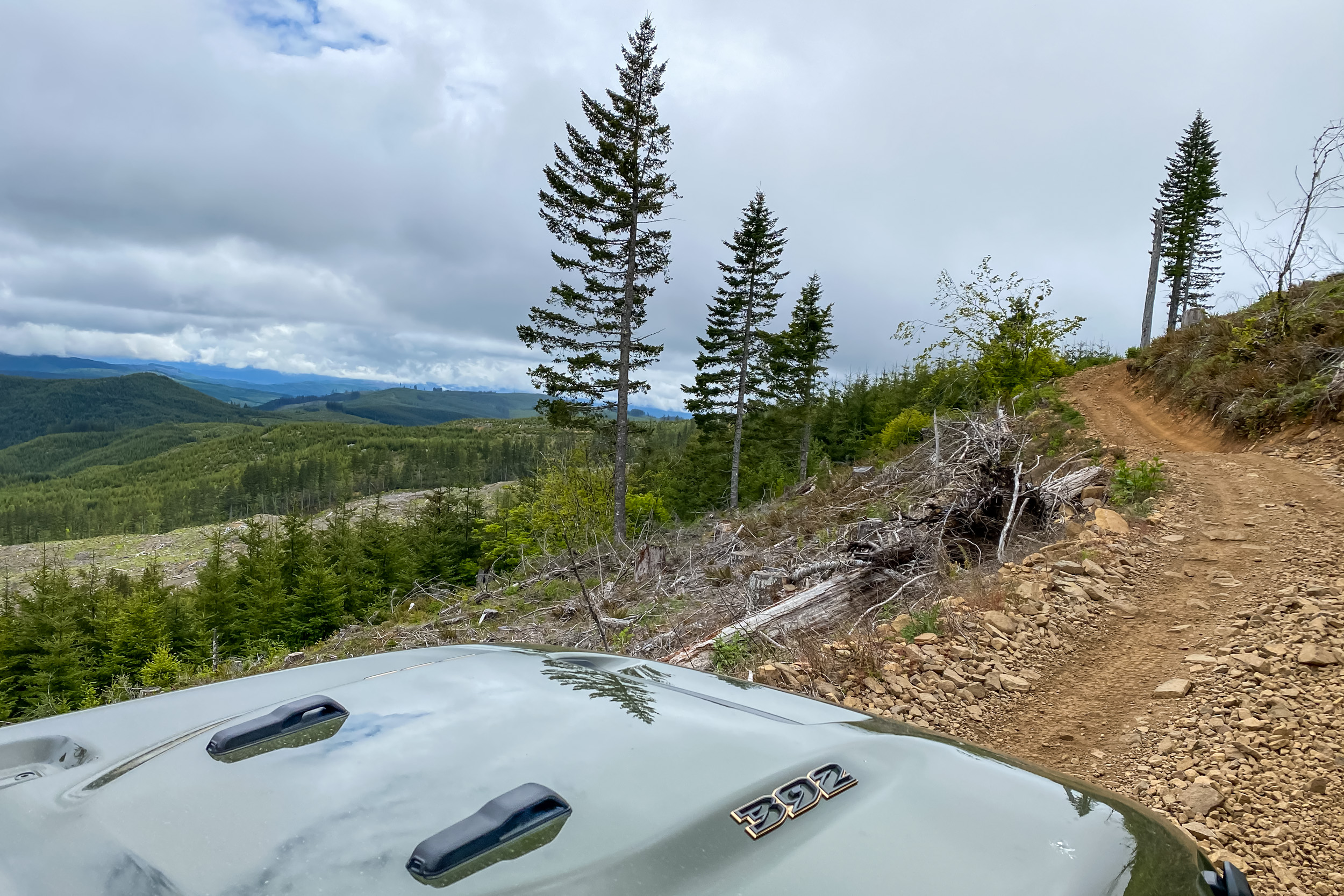 Speaking of noise. The Rubicon 392 makes a LOT of noise! It has dual dual exhausts and always has a deep growl that you’ll feel even if you don’t hear. It also has an active exhaust. This means at the touch of a button you can really make the exhaust note come alive, and give you that raspy Hemi gargle when coming off throttle that all muscle cars have. The truth; the exhaust note sounds mean, aggressive, and amazing, but gets old pretty quick. I easily (and unintentionally) scared more than a few children and I’m sure some wildlife while driving this snarling beast. 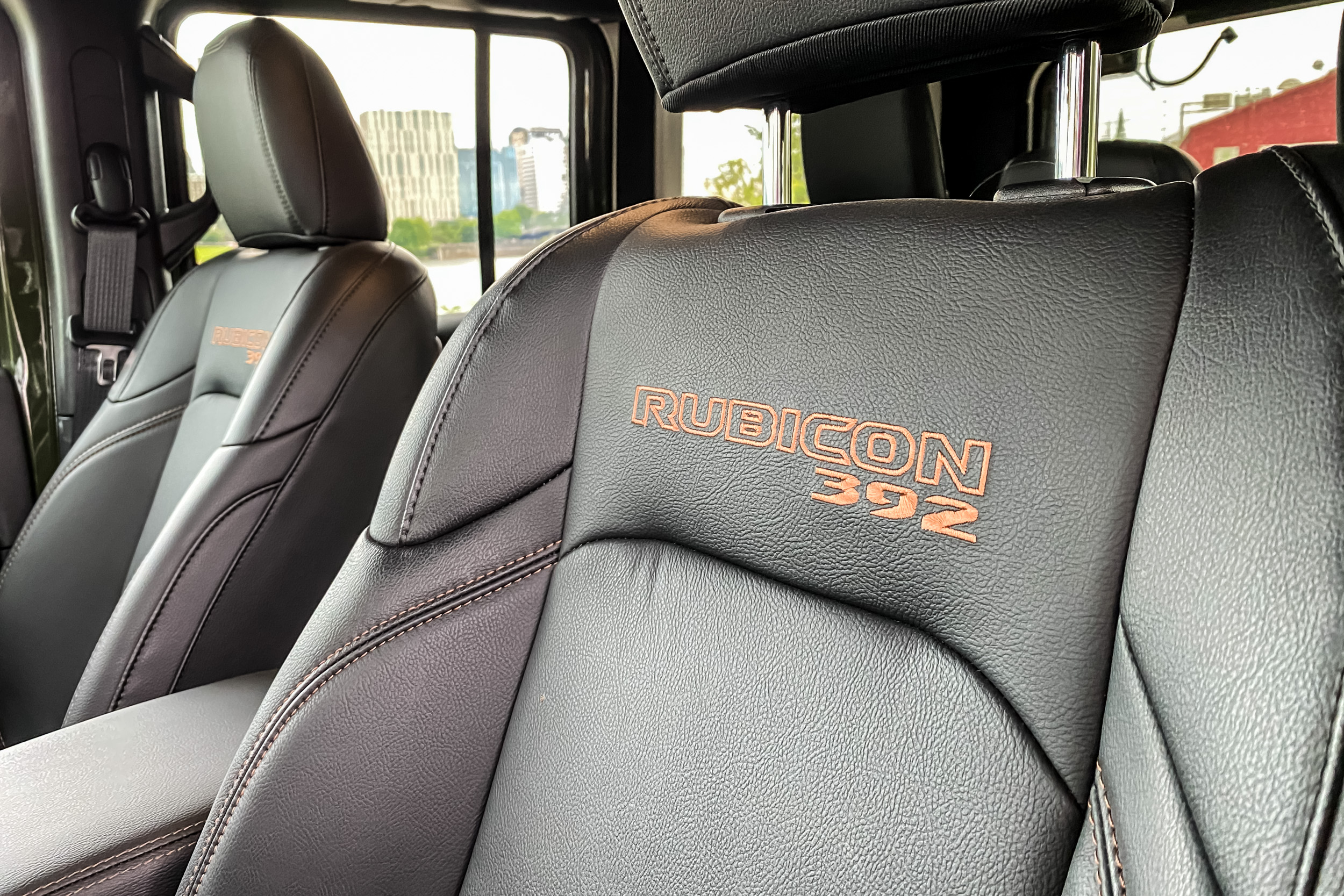 No Jeep Wrangler has a quiet cabin, as that would be near impossible to achieve with a vehicle that has a removable top. Wind and road noise is considerable at highway speeds -partly due to the aggressive mud-terrain tires- and the exhaust drone of the big Hemi will wear on you on long road trips.

Things You Can’t Have in a Rubicon 392

The Rubicon 392 is only available in a 4-door, so no 2-door Hemi Wrangler for you.

If you want to row your own gears, the only Jeep Wrangler on offer with a manual gearbox is the V6. With that said, I really don’t like the 6-speed manual on the Wrangler and the 8-speed automatic is a great transmission. I love driving manual transmission vehicles, but the manual in the Wrangler/Gladiator is just a clunky unit that doesn’t do as good a job as the auto. With that said, the only option on the 392 is the auto, so you’re good.

Driving the 2021 Jeep Wrangler Rubicon 392 in two-wheel drive isn’t an option. That’s a shame, as 2WD burnouts and drifts would be SO fun in this Jeep! Instead of 2WD you get 4H Auto, basically AWD. On a loose gravel surface, 4H Auto does allow for some fun sideways four-wheel drifting, however. Off-road enthusiasts don’t need to worry either, as we still get selectable 4H and 4L for when we leave the pavement.

As with all Jeep Wrangler Rubicon vehicles, the 392 is seriously off-road capable. I took it out for a day of playing in the very damp coastal forests west of Portland, OR, and found it to do all the things a Jeep should do, with ease.

With big power on tap, the 392 is a bit jumpier than any other Rubicon, as I found the throttle pedal to be touchy. I love a responsive throttle pedal, but off-road it is a bit harder to drive the 392 smoothly at slow speeds than other powertrain options on offer in the Wrangler. It’s also a lot easier to spin the tires in the 392, something you want to avoid, both for the longevity of the Jeep parts and tires as well as to Tread Lightly. 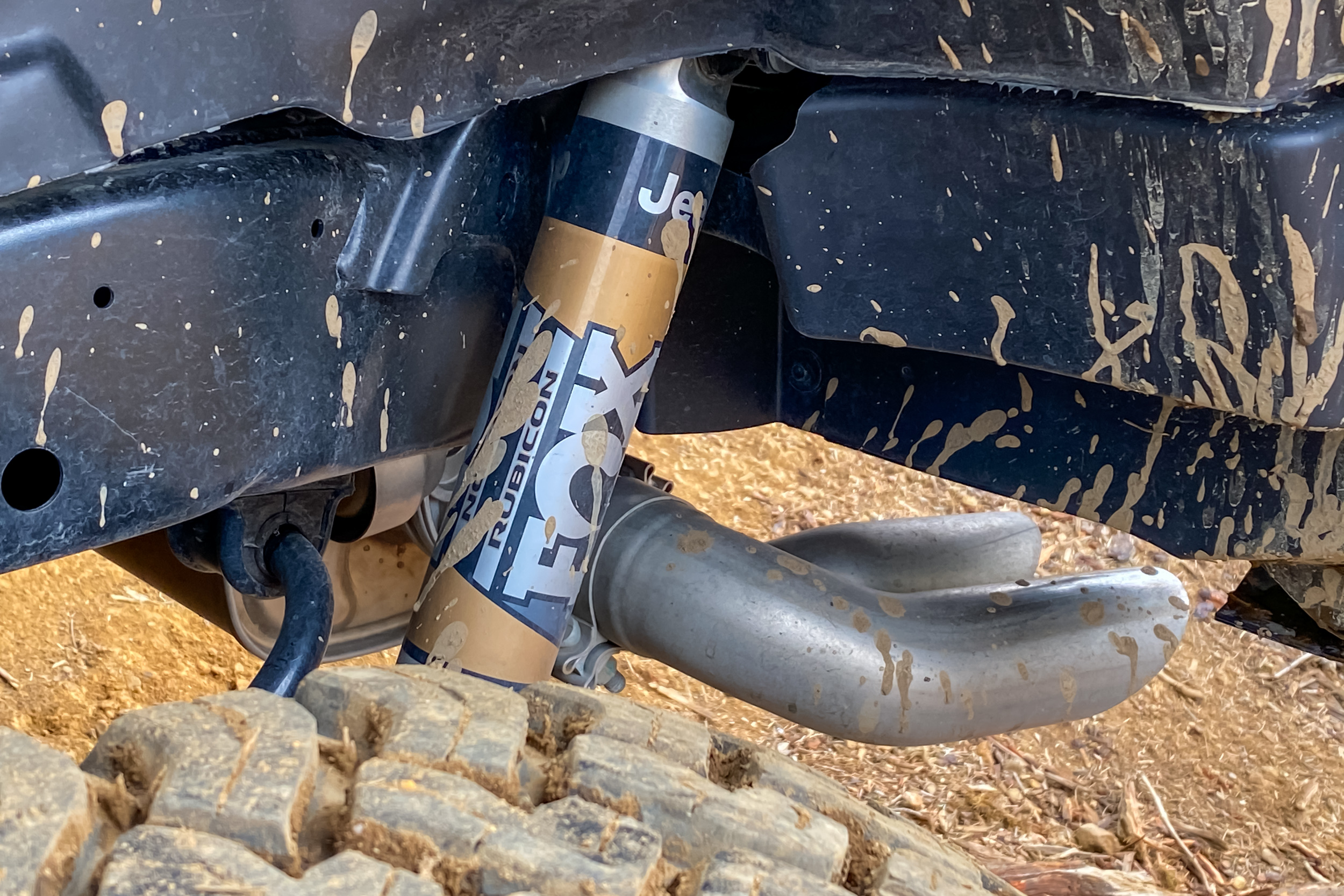 The Fox suspension in the Rubicon 392 is really good at soaking up potholes and rough roads while at speed. At slower speeds I found it to be a bit stiff. The 392 is a Jeep that is meant to be driven at speed, on and off-road. 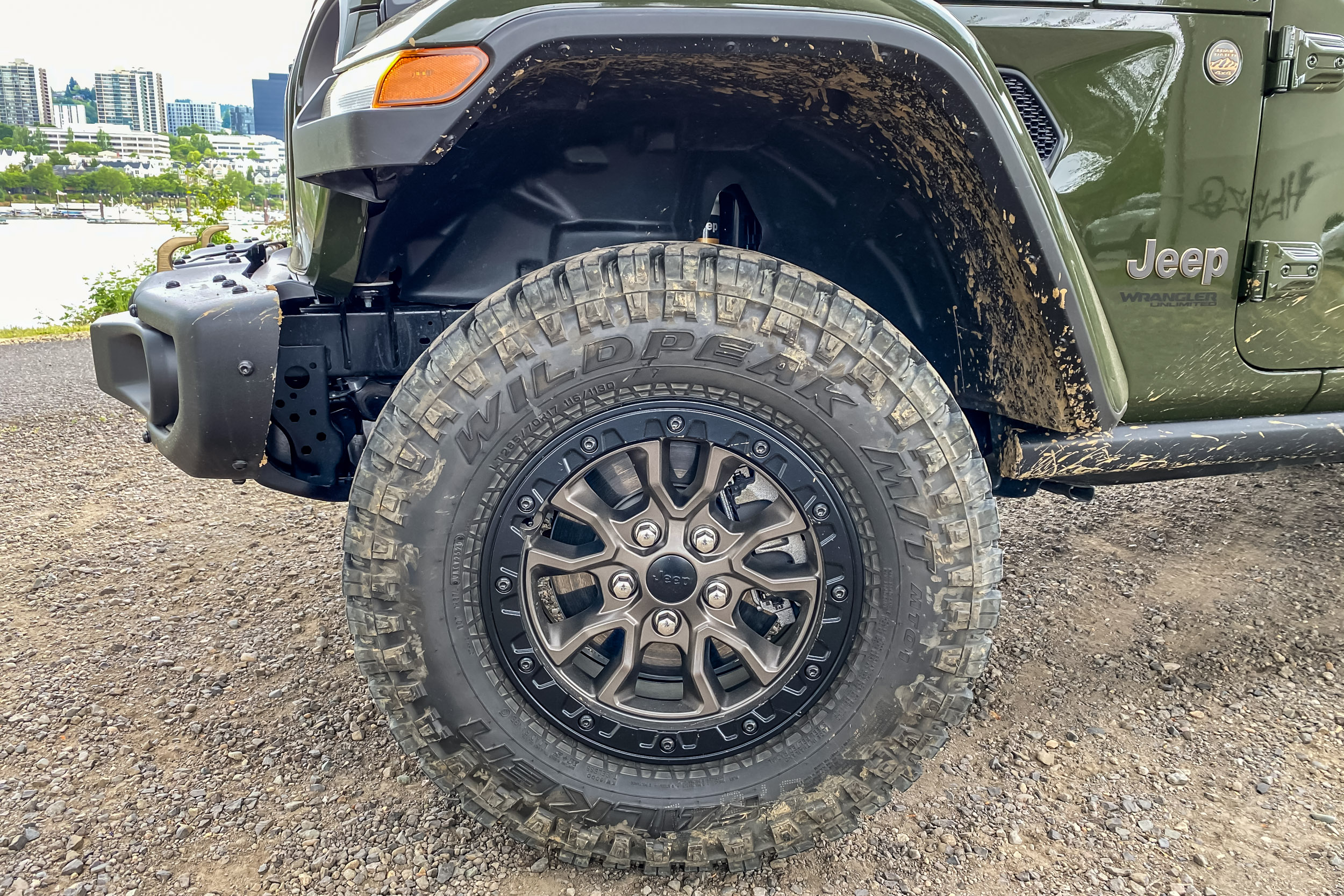 I found the standard 33-inch Falken Wildpeak MT Tires to be quite capable and confidence-inspiring on and off-road. I did also find them to throw a lot of rocks on gravel roads and not be exactly quiet on the highway. These meaty tires are wrapped on 17-inch beadlock-capable wheels (you just need proper rock rings from Jeep Performance Parts). They not only look good but are also functional.

The 2021 Jeep Wrangler Rubicon 392 truly shines when it comes to speed, power, and sound. You do pay a hefty sum for those upgrades, however. Don’t expect prices to come down or to find one of these Wranglers on sale either, as we have little doubt that this model will only be on the market for a few years at most. This is no doubt the last great internal combustion engine (ICE) Wrangler, as Jeep transitions to battery electric vehicles (BEVs).