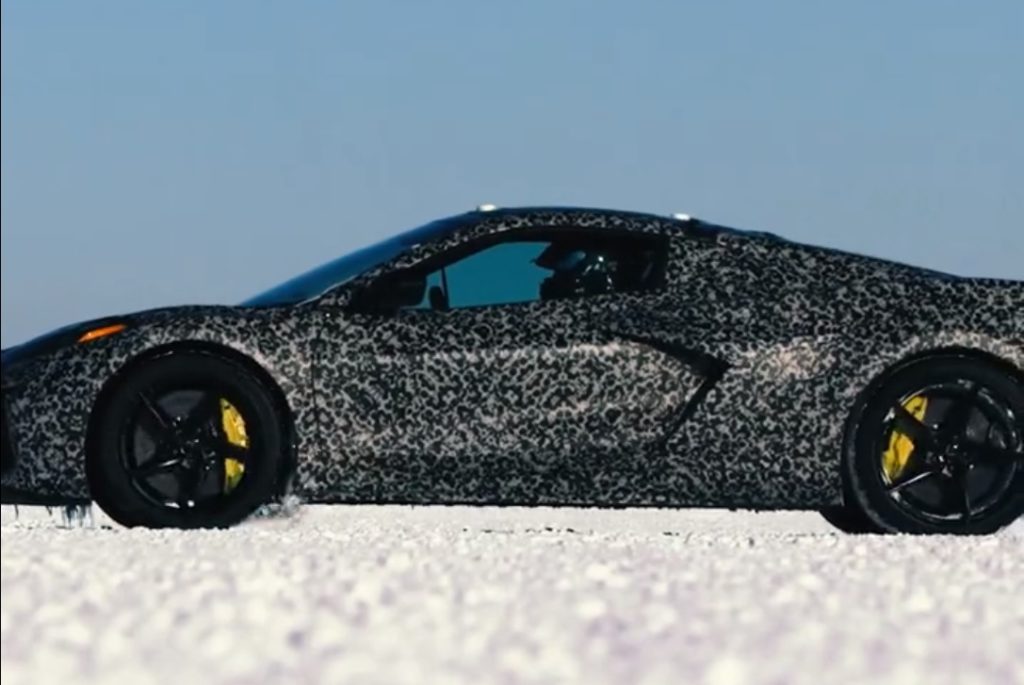 It’s official: A Chevrolet Corvette EV is coming. Even better, an electrified Corvette is coming as soon as next year. GM President Mark Reuss made the announcement this morning in a post on LinkedIn. He included a clip that shows an all-wheel-drive system on Corvette for the first time.

“Some time ago, we moved the Corvette team into the EV space in Warren, Michigan, and when we revealed the new mid-engine Corvette, I said there would be ‘more to come,'” Reuss said before answering “the question I’ve been asked countless times.”

Yes, there will be a Chevrolet Corvette EV coming, but when? Reuss said that it would arrive in the future, not estimating the timeline. The announcement confirms rumors that have been swirling for years. Even President Joe Biden mentioned the vehicle in a campaign spot, making us wonder what he knew and what we didn’t.

GM will base the new Chevrolet Corvette EV on the Ultium platform. Ultium encompasses electric drive motors, power electronics, batteries, and even the vehicle platform.

Does it mean that the Corvette EV will have the same platform as the Hummer EV? No, but it does give us a look at what kind of battery power and motive power we can expect. After all, the Hummer EV offers more than 1,000 hp.

With the announcement, Reuss posted a short video teaser.

BREAKING: An electrified #Corvette will be available as early as next year and a fully electric version to follow. Stay tuned for more. pic.twitter.com/6lDUWpOIZ2

The clip features a camouflaged C8 Corvette body, fitted with the power we’ve never seen in a Corvette before.

Our first hint is the electric yellow brake calipers. That color has been associated with electric power for a few years now, with Porsche being one of the first to use it to signify electrification.

The second hint is the spinning front wheels. Yes, the Chevrolet Corvette is sending power to the front wheels for the first time. Since Reuss said there would be an electrified Corvette as soon as next year, it’s safe to say this one is it.

The current-generation Corvette, known as C8, is the first of the line to feature an engine mounted behind the driver. This frees up the space needed for an electric motor up front.

AWD is easy to achieve with an electric motor driving the front wheels, like the Ferrari SF90 Stradale. No driveshaft running front to rear is needed, no particular transmission is required, and electric motors are easier to package.

The AWD system would also allow for torque vectoring. A system where power is shifted from one wheel to another in a way that uses power to enhance agility and cornering experience.

How do we know this isn’t the fully electric Corvette? We’re making some guesses here. But they’re based on Chevrolet’s choice to overlay the video with the sound of a V8. If the car you were showing didn’t get gas power, you wouldn’t do that.

It also still has tailpipes coming out of the rear bumper. We think we can see condensation and exhaust mixed in with that snow spray rooster coming off of the back of the Corvette.

On CNBC’s SquawkBox, Reuss talked about how quickly Chevrolet was working on bringing these EVs to market. “Very fast,” he said, talking about the timing and not the E-Vette’s acceleration. Reuss compared it to the Lyriq EV, which Cadillac pulled forward nine months from the original schedule to get to market more quickly.

There is good news for those who prefer their Corvettes to burn fuel and not transfer electrons. Reuss said that production of the Z06 model with its flat-plane crankshaft has started. He also noted that more gas-powered variants would be coming, though he didn’t go into detail.

All this is to say that we expect to see a hybrid AWD Corvette in 2024 and a full battery-electric Corvette to follow not too far behind. What we don’t know is if the hybrid will be a plug-in hybrid or not.

GM had some other Ultium news to go along with the announcement. The Ultium Platform will have a new patented heat pump and energy recovery system. The system will capture and store waste heat from the batteries and electric motors.

It can even capture humidity from inside and outside the car. It will then turn that power into cabin heat, warming it more quickly in winter while using less battery electricity. General Motors claims up to 10 percent more range from the new system.