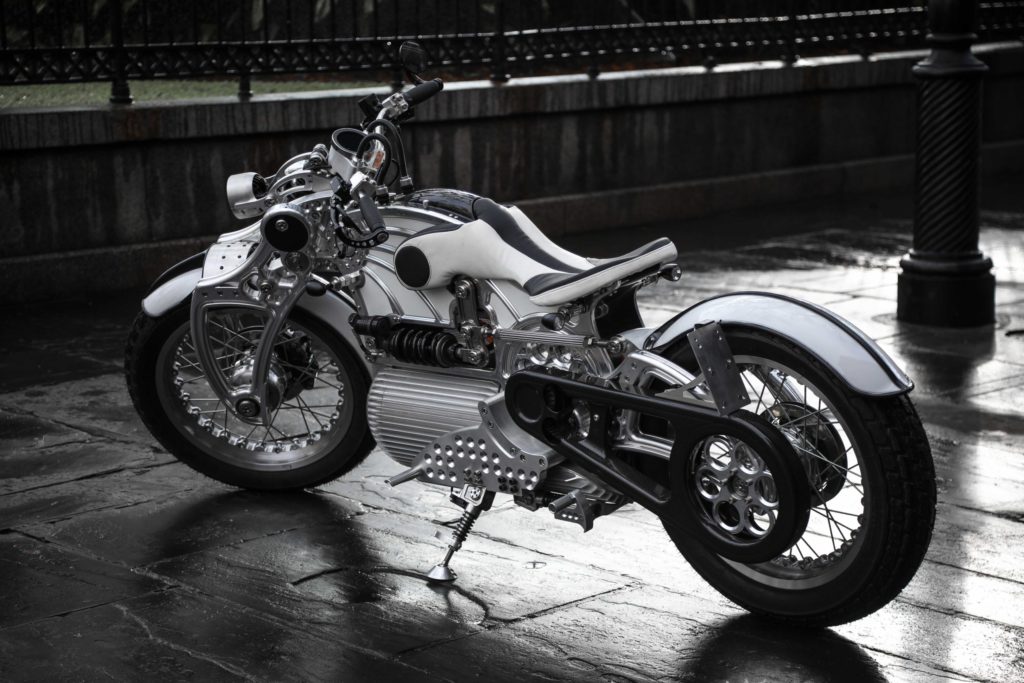 Curtiss Motorcycle recently released its latest video teaser for the Hades electric motorcycle, and they desperately want you to care about it. Yes, this is the same Hades they teased two years ago, and yes, it still looks like a pair of steampunk spectacles attached to the underside of a donkey. The “news” is that there’s now an actual working prototype that is — somehow — even more awkward than the initial renderings.

I’m hating on Curtiss here, and this is partially an opinion piece. I can’t stand the design. I don’t think the engineering is novel. Perhaps the Hades is rolling art that somebody other than me will really enjoy. Fine. This is America, and I’m happy for the diversity of creators in the world.

BUT if I’m going to spend serious dough ($90,000+) on a boutique motorcycle I want — nay, I demand — that it’s got it where it counts. For me, the Hades lacks detail and sound engineering. So what do I mean by that? Let’s review the specs.

Curtiss specs an “advanced” Cascadia Motion PM100 inverter. I’ve been spec’ing that same unit for at least 10 years; it is a great product that can deliver 217+ hp no problem, but it’s not advanced or new. Why they chose to route the three-phase connections the long way to the motor boggles the mind — that inverter should be flipped.

The motor manufacturer is not listed, but it sure looks like a YASA axial flux pancake that just happens to be rated for about 217 hp.

The battery is likely the weak point. But before I break down the pack, it’s worth discussing UN 38.3. In short, UN 38.3 is a captivating read that details the battery regulations for shipping lithium products.

The testing process is lengthy and expensive often taking several months and costing tens of thousands of dollars. In the process, several battery packs are destroyed as they are tested for short-circuiting, vibration, heat, cold, overcharging, etc.

As a result, it’s much easier to build a battery pack with already tested modules. However, it’s clear from the video and renderings that Curtiss is going to build a custom pack. One wonders whether Curtiss actually intends to satisfy the costly 38.3 requirements or if their engineers are instead praying that customers never see a failure.

Let’s say Curtiss actually engineers the battery pack properly — it’s still too small. You can say that size doesn’t matter, but that’s just what we say to make ourselves feel better about our inadequacies. And Curtiss can’t squeeze enough juice into that package (pun intended).

After reviewing the renderings and basing my calculations on the 64-inch wheelbase, I’d estimate there are about 14.5-inches of pure cylindrical battery length with a 10-inch diameter in which you could stack five layers of 18650 battery cells (confirmed in the video background above). Looking at the battery pack cross-section above, each layer at best can hold perhaps 140 cells, for 700 cells total.

In the best-case scenario (12 Wh per cell), that’s just 8.4 kWh of capacity. By comparison, the Harley Livewire packs in 15.5 kWh of capacity — almost twice the energy. By my estimate, the Hades will roll to a halt after just 70 miles of mixed riding.

Size also matters for delivering power. At 399V, you need about 100 cells in series, meaning that there are just seven cells in parallel. To hit the claimed 120 hp peak, the Hades will need about 250 amps of output from those seven cells, and 35A per cell is a big ask.

Plus, hammering cells at peak current is a good way to wear them out quickly, and the Hades doesn’t appear to have any active cooling system to protect those cells.

Will It Be Road Legal?

I question whether the Curtiss Hades electric motorcycle will be technically street-legal. In the U.S. we live under the scrutiny of the Federal Motor Vehicle Safety Standards (FMVSS). The FMVSS doesn’t care if you’re making five vehicles or 5,000 vehicles; to be legal on public roadways it must meet their standards. Manufacturers are required to test and verify signals, mirrors, tires, windscreen, and even brake hoses. I’ve seen it. It’s brutal.

Manufacturers are also required to self-audit for FMVSS. Smaller boutique manufacturers tend to short-cut wherever possible, but the legal ramifications if something goes awry are real and can sink a small company.

If you own a Desmosedici and there’s a recall, what happens? Ducati North America comes in and makes it right. What happens if a Curtiss battery pack catches fire, and there’s a recall? Curtiss goes out of business, and you’re left with the smoldering remains of what was once your garage. This isn’t just true for Hades — it’s true of many small-production bikes. But with batteries on board, it’s riskier.

Let me give a little on one point: analog. I think that analog is underrated in modern vehicles. The new normal is to have a curved cinema on your dashboard, a heads-up display, and enough radar systems to make an F-15 envious.

Motorbikes and scooters are not spared from information oversaturation either. The Curtiss Hades electric motorcycle is refreshingly simple with an analog display. With electric power you can actually hear the birds and feel the pavement in a novel way — to clutter your vision seems counterintuitive to the electric motorcycle’s best traits.

Love it or Hades?

For all my naysaying, I really hope this bike makes it to production. It’s a spectacular execution of vision with some quality components on board. If Curtiss could pack in more energy storage, it could be a really phenomenal machine.

If this speaks to you and you’ve got seriously disposable income, go for it. Even sitting still, it’s remarkable. Though I’m still skeptical about buying boutique electric motos that are nearing six figures in price.

Matt Chambers says it’s about love. I say f*** that, motorbikes aren’t about love. Motorbikes are about passion, lust, and envy. Show me cardinal sins and take my money. I have no love for the Hades.