Have you ever thought about the environmental impact of riding your fuel-sipping motorcycle versus your gas hog pickup? The reality of motorcycle emissions might shock you!

It’s game day, and your buddy has an extra ticket to the Egg Bowl. If you leave in the next fifteen minutes you can make kickoff – you just need to crush five hours of highway pavement. Do you take your BMW R1150GS motorcycle or your shiny new RAM 1500 HFE pickup? Your weather app shows 92° and humid like a Finnish sauna, but you’re feeling eco-conscious and opt for the GS which boasts 37 MPG. You make the game just in time. By now you look like you took a sweat shower with your clothes on, and have zero chance of cozying up to any of the Bulldog cuties next to you.

The saddest part? You did no favors for the planet; that 500 lb GS actually spews out more harmful chemicals than your 5,000 lb truck. Too bad, the few bucks you save on gas won’t even buy you a beer at stadium prices. Sounds impossible – and it is – but only because in the new COVID world none of us will be cozying up at a football game anytime soon. But the emissions data about your motorcycle is no joke.

Over the past two decades, passenger vehicle emission systems have improved dramatically. This has been driven by CAFE regulations in the US and the Euro-6 in the EU. Modern engine control and closed-loop catalytic exhaust systems can eliminate many harmful greenhouse gasses (GHGs). Motorcycles make up the smallest fraction of transportation – less than 1% in the U.S.- so they’re not targeted for regulation like cars.

Sure, you say, but the exhaust volume from 1,150 CCs is far less than from a 3.6 L V6. You’re right — but the problem is not just quantity of exhaust but the quality of exhaust. The gas volume that comes out your tailpipe is largely benign, but the culprit’s CO2, CO, HC, and NOx are what we care about – these are what damage the atmosphere. Catalytic systems can capture most GHGs, but the existing technology is too large and restrictive to implement on motorcycles.

Before any new car hits the showroom, the EPA runs an emissions evaluation and calculates a “CO2 equivalent” – a single number that represents GHGs CO2, NO X , HC, and CO. The CO2 equivalent units are in grams/mile, so a higher number means more GHGs and more climate damage. For a 2WD 2020 Ram 1500 HFE on the highway, that number is 340 g/mile. Unfortunately, motorcycle emissions data isn’t documented by the EPA. This is a real issue, because if the problem isn’t measured you don’t know what to fix.

There are a few independent studies that shed light on the issue, however. One published in 2008 by Swiss researchers took real data from several motorbikes including a BMW R1150GS. The GS highway CO2 equivalent is a stunning 380 g/mile (17% worse than the Dodge)! They found that a 1993 Honda Shadow VX600 with only 583 ccs spews a whopping 408 g/mile. That is twice as much as a new Honda Civic!

Other studies would suggest the problem is even worse. Global MRV tested out their portable emissions equipment in 2011 comparing 12-motorcycles to 12-cars of varying years (this was featured on an episode of Mythbusters). Motorcycles were almost universally terrible, with motorbikes from the 2000’s producing 3,220% more NOx and 8,065% more CO2 than cars of the same era. California has the largest motorcycle ridership in the country, and in 2008 the LA Times reported that while motorcycles accounted for 1% of all miles traveled, they were responsible for 10% of the state’s smog-producing emissions.

Environmental Impact: Not Just About Emissions

There’s more to being green than GHGs. It’s important to consider the total environmental footprint of your transportation. Motorcycles can be less energy-intensive to produce than automobiles, as they’re much smaller and simpler. This depends on the bike and car in question since small production volumes don’t have the same efficiencies of scale as high volume cars. 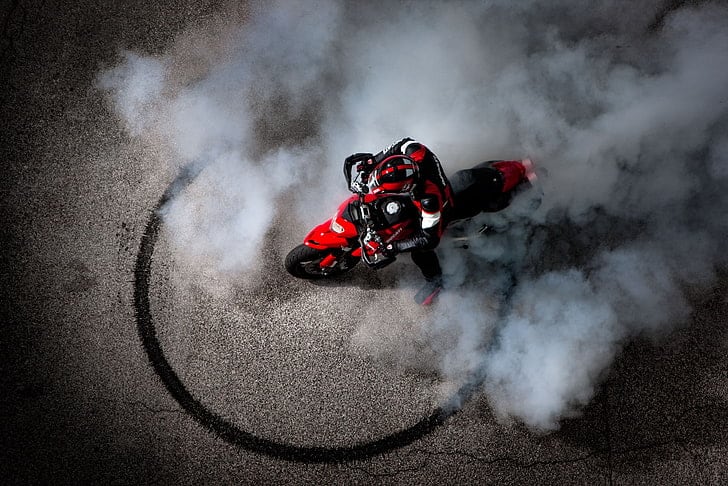 If you want to keep your Greenpeace membership and still shred, full electric is the only way to go. Lucky for us electric motorcycles are also starting to get really exciting! If the Harley Livewire or Zero SR/F don’t trip your trigger check out Energica – these bikes are true stallions worthy of the Italian flag with the racing heritage to back up their street cred.

Going Green: The Moto or The Auto?

The Bike vs. Automobile environmental impact question doesn’t have a simple answer, there are just too many variables. For example, if your route to the game was through downtown Memphis the GS might win since the pickup isn’t efficient in slower stop-and-go situations. What is truly needed is more data from real-world tests and carbon footprint auditing. By starting to measure the problem we can target the changes that will make a difference. Until then, don’t feel bad about jumping in the cab and cranking the AC if you need to arrive looking fresh for that cutie.

Pure electric is the best technology we currently have for reducing motorcycle emissions. While nothing tugs at my heartstrings like the sound of a v-twin and dry clutch, silent electric propulsion is nothing short of exhilarating. If you haven’t yet – go experience the thrill of burning electrons instead of petrol.

Last dear reader, let’s be real here, deep down you don’t care about any of this. Motos are passion first and practicality second for most of us in North America and Europe. Also, #motodistancing is much-needed throttle-therapy. Seriously, why are you still reading? Go put the fun between your legs!


Everything You Need To Know Before Buying A Pit Bike
The 2018 Suzuki GSX-R1000: Which Color Do You Want?
What’s Special About The 2018 Kawasaki Ninja ZX-10R SE?
Is The Aprilia RS 660 Production Ready?
10 Most Striking Yamaha VMAX Customs Ever Made
Would You Ride An Electric Kawasaki Ninja?