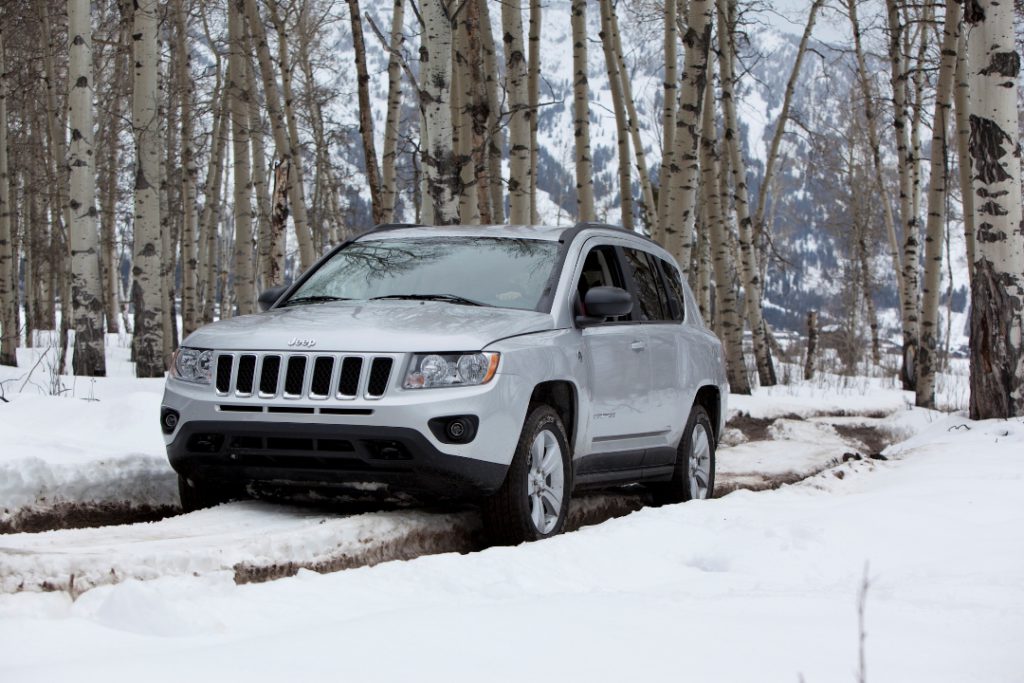 So, you don’t want to spend another winter trapped in your home while the roads are covered with snow? Well, you’ve got two options: slap a set of snow tires and a pair of winter wiper blades on your current ride (which can be very effective) or purchase a vehicle that was actually engineered to thrive in the wintery stuff. And the most cost-effective way to get a vehicle that is equipped to handle winter weather is to buy one of the best used cars for the snow.

The Best Used Cars for the Snow

Sure, you could throw some money at a new Volvo V90 Cross Country or a fancy AWD Tesla — but why do that when there are so many amazing used vehicles on offer. There’s no shortage of online resources waxing lyrical about the best cars for snow driving, but what about the best used cars for snow driving? We’ve got you covered. Below are some of the best winter vehicles that you find on the used car market. 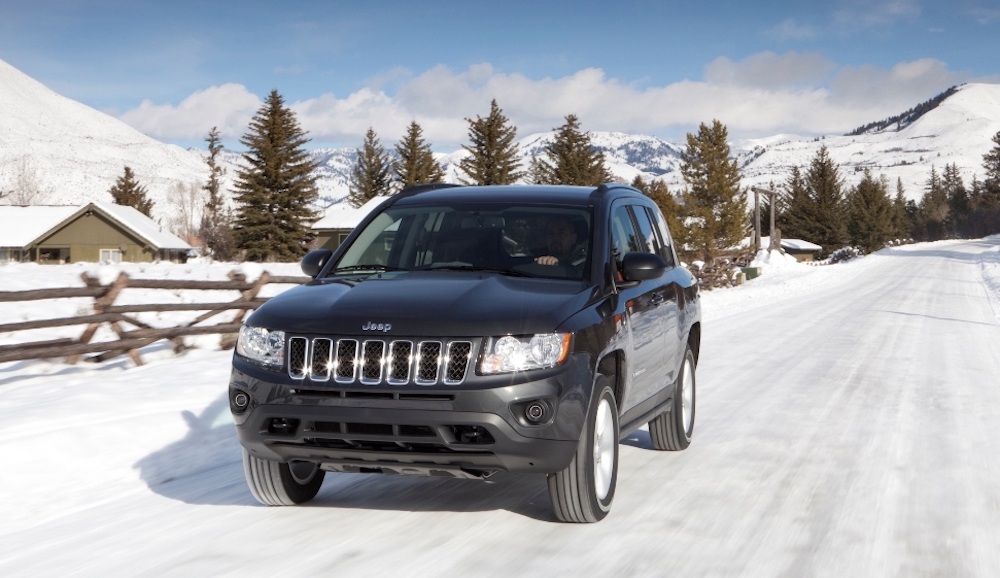 This compact SUV is one of this American automaker’s first crossovers. Depending upon the model year, the Jeep Compass came equipped with a 2.0L, 2.2L, or 2.4L engine, all of which are powerful enough to get you over and through any snow drifts that you might encounter.

And thanks to over 8 inches of ground clearance, this comfortable, family-friendly vehicle is a genuine beast in the snow. And used Jeep Compasses are relatively affordable. It might be tempting to seek out something newer or more advanced like the Jeep Grand Cherokee or the Jeep Renegade, but the Compass is just as utilitarian when the cold weather hits. 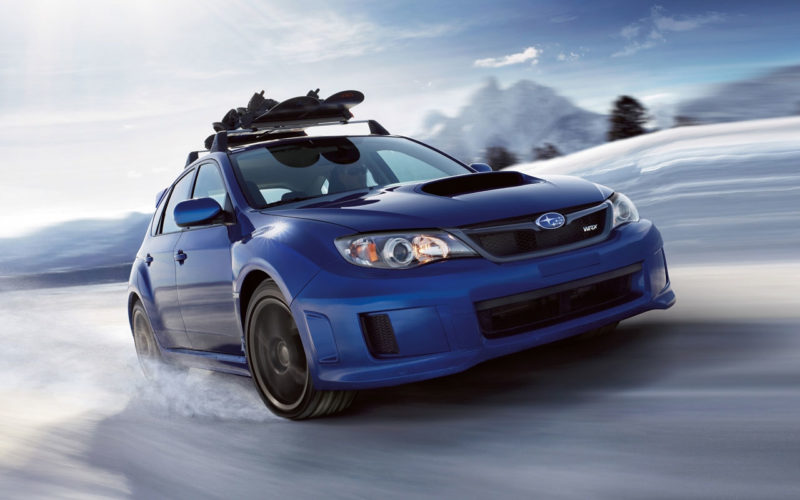 If safety is deciding factor in your hunt for the best snow vehicles, odds are that a Subaru is already on your shortlist. Rather than opt for a Crosstrek, Forester, or Outback, how about this more unexpected offering? Consider instead the Subaru Impreza WRX STI.

This sporty sedan is not just safe; it truly comes alive in the snow thanks to its driver-controllable differential and symmetrical all-wheel-drive system. These advanced features plus its stock top speed of 149 mph should not come as a surprise since the Impreza WRX STI’s roots can be traced back to winter rally races. Oh, and let’s not forget that this hawk-eyed ride is downright pretty enough to kiss goodnight each evening. 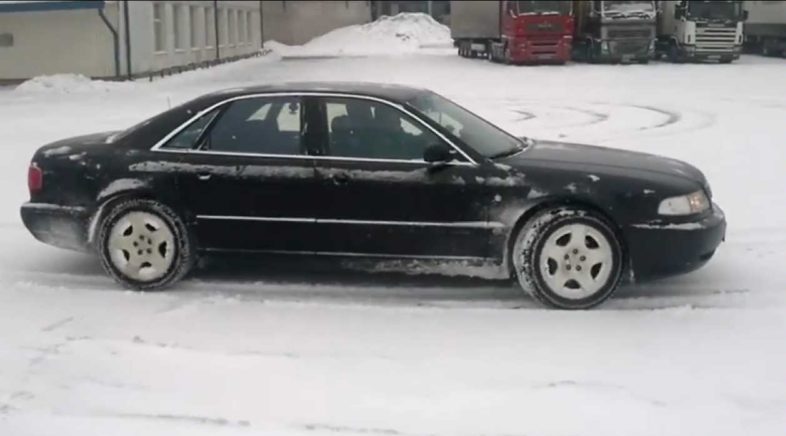 Even used, an Audi A8 will set you back much more than a set of snow tires and a pair of winter wiper blades for your current car. But, there is no denying that if you are looking for comfort and performance in the winter, it is very hard to beat what the Audi A8 offers.

One feature on the A8 proving it was made for the snow is the built-in ski bag that allows you to slide your skis in from the trunk through a pass-through to rest on the rear seats. Since the skis are in a bag, your seats stay nice and dry. Additional features that will keep you safe on the wintery roads include all-wheel-drive, stability control, rear fog lights, heated retractable headlight-washer nozzles, and heated windshield wipers. 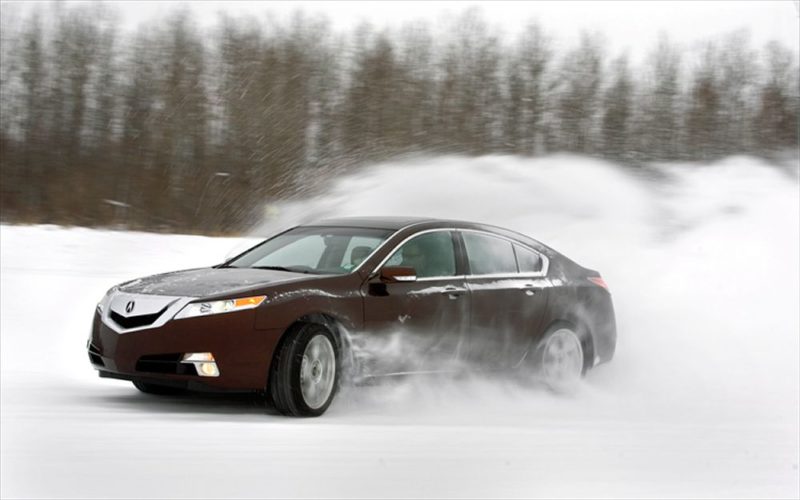 Available with Super Handling All-Wheel-Drive, the Acura TL automatically adjusts its power system to transfer its power to its outside wheels while turning to help it maximize its exit speed. This also makes it one of the best used cars for the snow.

This handsome sedan’s SH-AWD, 305 horses, and 3.7L V6 that is capable of twisting out 273 lb-ft of torque means that it has the strength and traction needed to conquer nearly any snowy road. If you can find one at a price that suits you, you’ll find them great for winter driving. 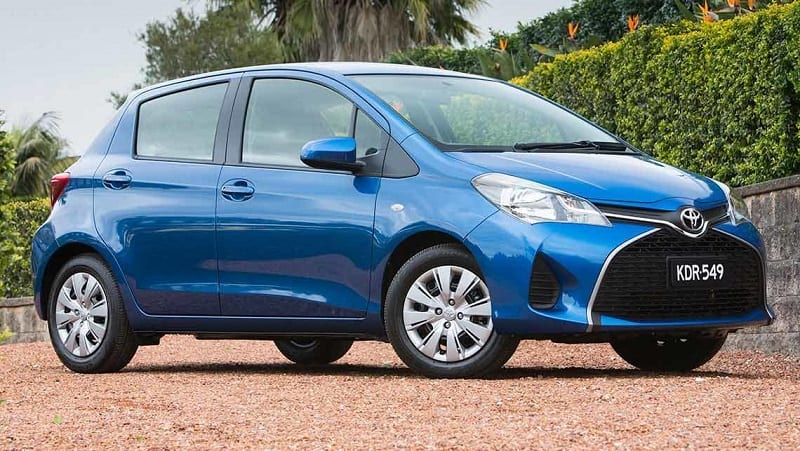 The Toyota Yaris probably isn’t your usual first thought when you think of capable winter cars, but given that it’s virtually unkillable, it’s a wise choice. Unlike other offerings on this list, it doesn’t come equipped with AWD, but a more vanilla FWD.

When it’s shod with winter tires, this lightweight car can comfortably navigate through the snow and ice without any difficulty. Besides, if you do end up sliding it into a ditch, it’s a Toyota Yaris, so not only will it probably be fine, but also you probably won’t spill many tears for it. 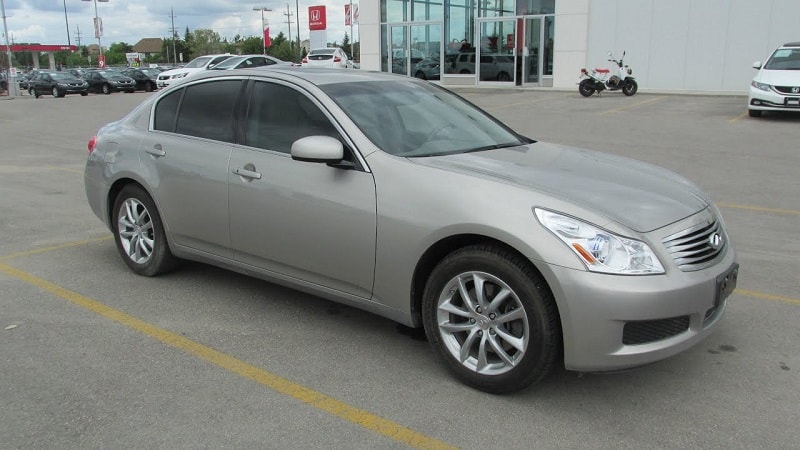 If you can find an Infiniti G35x for a reasonable price and in good condition, then snap it up immediately. Unfortunately, these gems don’t often turn up with a cheap price tag, so you’ll be left at the mercy of a high-mileage model.

If you find a good one, it’ll treat you very well, particularly in the winter months. The “x” designation signals that it is an AWD version, and that’s what you really need to tackle anything the winter throws at you. 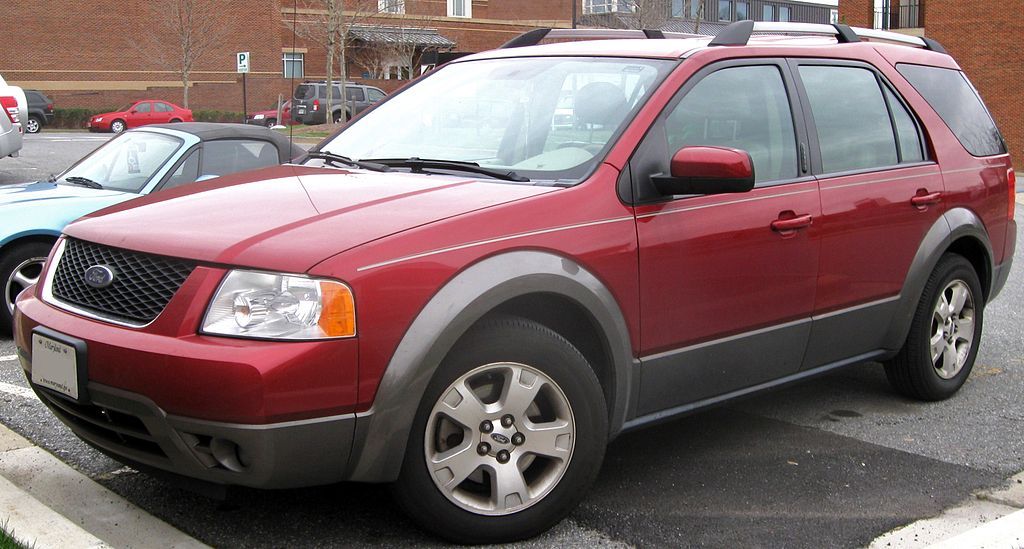 The Ford Freestyle (which was briefly rebranded as the Taurus X for the 2008-09 model year) is a great compact SUV for winter driving. Not only is it comfortable and fun to drive, it also has a practical AWD system that will get you where you need to go.

It offers a confidence-inspiring driving experience if you want SUV performance without dealing with the size of modern-day oversized SUVs. With plenty of room for passengers and cargo, it’s one of the best used cars for the snow.

What makes it better than other vehicles? Well, that mainly comes down to its versatile nature and affordable price point. Still, when it comes to the crunch, the Matrix can battle the elements with the best of them — and it will keep doing so for many a year. 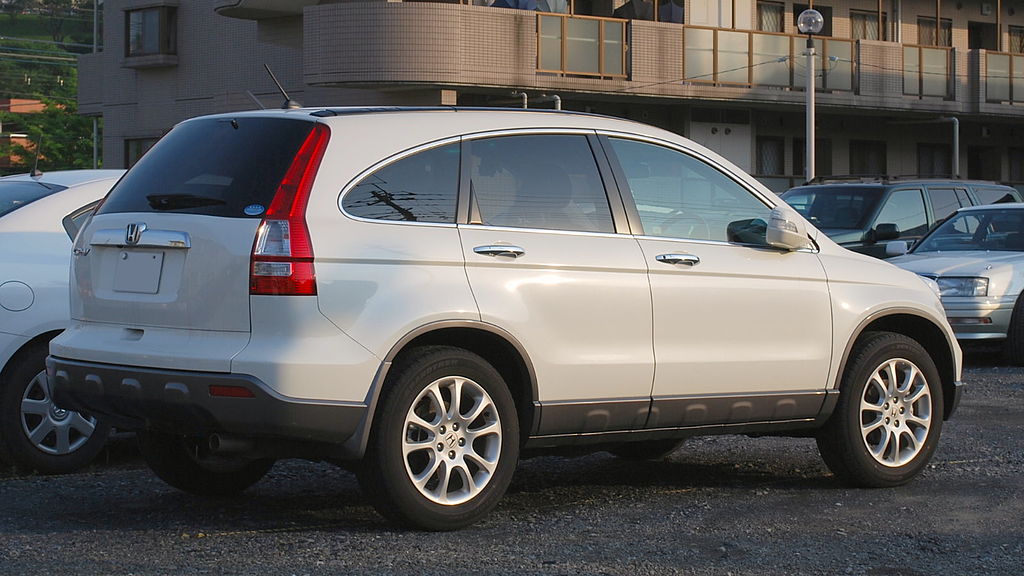 The Honda CR-V should be on any list ranking the best cars for the snow. This compact SUV seems to offer the best of both worlds: it rivals any sedan in terms of practicality and driver experience, but also adds in the cargo space and hauling power of an SUV — all wrapped into a manageable and unintimidating package making it one of the best used cars for the snow.

Though the CR-V has been known to have occasional issues, at the end of the day, it’s still a Honda so these issues shouldn’t be too expensive or terminal.  If you can find a used one at an affordable price, go ahead and add it to your stable.

Winter driving enthusiasts looking for the best used cars for the snow can’t go wrong with BMW’s all-wheel-drive variant on their popular sedan. Though you might find it hard to find a low-mileage option, these older models are relatively affordable compared to their modern-day counterparts.

And in terms of winter handling, they are composed and easy to drive in the worst winter weather. With the AWD system and a solid set of snow tires, you’ll find the 330xi can get you pretty much anywhere you want to go during the winter.

How to Make Your Small Car Perform Better in the Snow

Generally speaking, when it comes to driving in the snow, drivetrain, ground clearance, and weight all matter. However, this does not mean that small cars cannot perform in the snow. They can, and, in many cases, they can outperform larger vehicles that haven’t been designed to be driven in the snow.

In fact, Mark Cox, director of the Bridgestone Winter Driving School in Steamboat Springs, once proved this point to a class of cops that their police pursuit cars, mainly Chevrolet Camaros and Ford Mustangs, could perform better in snowy conditions than their SUVs by racing them around a snow-covered track. When properly prepared for winter driving, the pursuit car beat out the SUV. 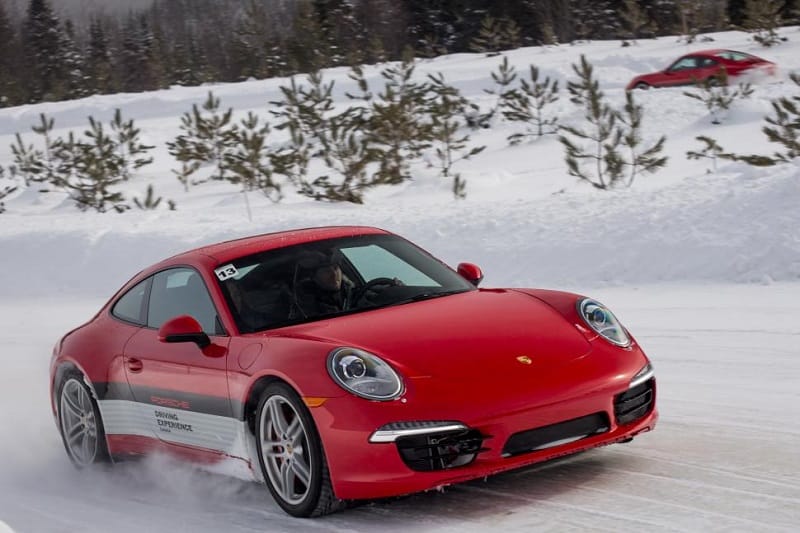 If you are going to drive in the snow with a small car or sedan, the most important thing you can do is put four snow tires on it. After all, the tires transfer your car’s power to the snowy surface and provide traction. Without traction, your car, regardless of its size, is not going anywhere.

Cox sums up the importance of these specialized tires perfectly:

“The bottom line is that, with the right snow tires, any car is drivable in winter. There used to be the idea that some of the performance cars were not suitable for winter use, but that’s just not the case and we see all the time that if you replace those summer racing tires with winter tires, you can drive anything.”

The Ying and the Yang of High Ground Clearance

Explaining the danger of high centers of gravity, Joe DeMatio, an editor for Automobile Magazine, noted, “SUVs tend to make people feel invincible because they have traction and ground clearance, but they don’t stop any better and have a higher center of gravity, so they’re easier to roll … invariably the vehicles you see on the side of the road or in ditches are SUVs much more than cars.”

In addition to putting snow tires on your small car, you will need to replace its normal wipers with winter wipers (and washer fluid that is rated for freezing conditions) if you want to maximize your car’s winter performance. These wipers are made of synthetic rubber that will not freeze and crack like a normal wiper will in cold temperatures. Also, they provide more downward pressure to the squeegee part of the wiper so that they are better able to clear rain, snow, and ice.

Before heading driving in cold temperatures, get your car’s battery checked. If it is not rated to handle sub-freezing temperatures, replace it. This is the same with your radiator fluid. It needs to be rated to at least -32 degrees F.

Prepare for the Worst

Make sure you keep blankets or a sleeping bag, gloves, a phone charger, jumper cables, and an ice scraper in your car before you start using it to drive in the snow. And add an emergency kit just in case.

Drive Safe This Winter With the Best Used Cars for Snow

This fall season get ready for winter by shopping around for one of the best used cars, SUVs and trucks for snow. Whether you’re commuting or heading out to the ski slopes, these vehicles will make sure you can reach your destination safely — no matter what winter weather comes your way