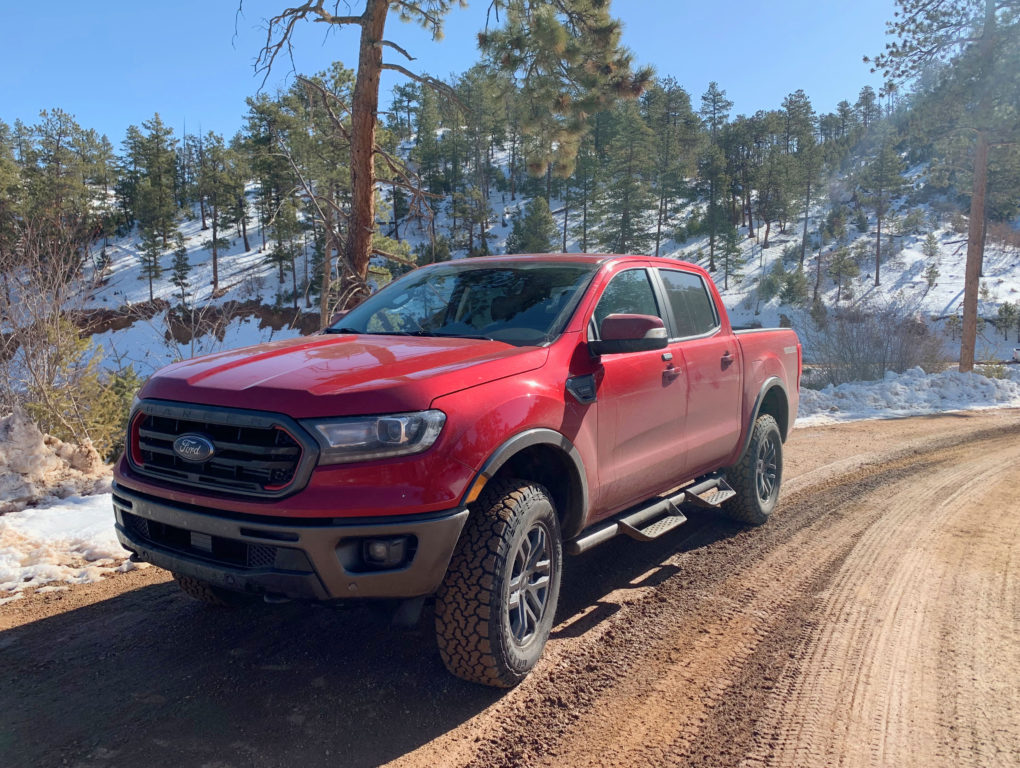 If you’re a midsize-pickup person, the Ford Ranger will be on your shortlist when shopping the new market. Thanks to its powerful 2.3L EcoBoost turbo-4 engine and thoughtful design, it’s a strong contender in this category. But if you’re planning a lot of off-road use, you need to plan on a lot of aftermarket mods — until this year. With the 2021 Ford Ranger Tremor edition, Ford did the heavy lifting, providing a very off-road capable midsize pickup ready to roll off dealer lots.

But how does it handle the real world? We took a 2021 Ford Ranger Tremor for a test drive in the frozen Colorado foothills to get a feel for this from-the-factory offroader. Here’s how it washed out. And boy oh boy, did it need a wash!

In Short, the Tremor is the package I would almost certainly choose if looking to buy a Ford Ranger pickup. The spirited 2.3L EcoBoost, making 270 hp and 310 lb.-ft. of torque, gives you plenty of power to get frisky on dirt trails or to just roll smoothly with highway traffic. While this is true with the entire Ranger line, the Tremor steps away from the pack with a lifted suspension, 32-inch Continental General Grabber A/TX tires, and 9.7 inches of ground clearance.

So, why would I choose the Tremor model? Well, those few modifications noted above are the first upgrades when modifying a pickup for off-road adventures. My personal vehicle, a  2010 F-150 FX4, runs 33-inch tires with a 2.5-inch leveling kit. The additional clearance, plus larger, more aggressive tires, gives me extra confidence while traversing rough roads in the mountainous backcountry where I hunt, hike, and explore year-round. So getting these updates, plus a lot more, from the factory makes sense as a person who doesn’t have tons of time to spend researching and wrenching aftermarket parts.

How well did the off-road upgrades function on the Tremor? In a word, well. 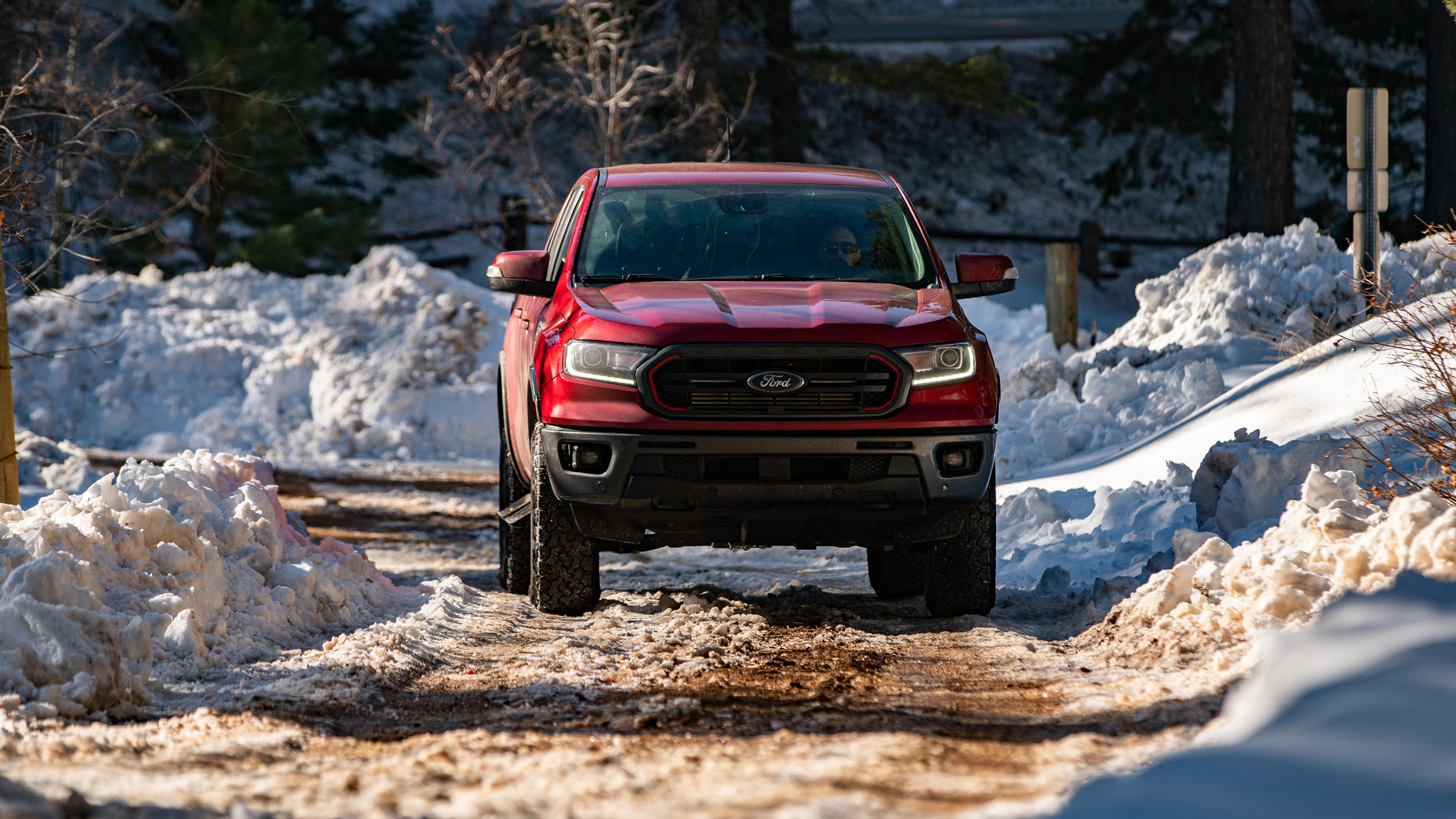 To put the Tremor through its paces, I used the truck for a week during Colorado’s springtime weather to drive from Denver to Summit County for a day of skiing. I also took it into the foothills near Denver for some light off-road driving. Unfortunately, most of the off-road trails in my region were still buried in several feet of snow during our early April test. But we did what we could to put the truck through some of the applications most outdoor recreational users would encounter. And from my driver’s seat, it passed with flying colors.

My first use of the Tremor was, admittedly, fairly mundane driving. But it was also the kind of driving most people will do with their vehicle about 90 percent of the time. For me, that meant a 60-mile trip up Interstate 70 from Denver to Breckenridge, Colorado, then a couple of days of bouncing around in the high mountains.

Driving the highway, I was repeatedly impressed with the ease at which the Ranger Tremor accelerated, even in the thin mountain air. You’ve got the artificial atmosphere of the turbocharger to thank for that one! But rolling along at 70+ MPH on the steep interstate, the truck felt planted and capable, as if I were actually driving significantly slower than I was. I rolled along in the fast lane and enjoyed the laziness afforded by flawless adaptive cruise control. Just set it, and the truck coasted in behind slower vehicles beautifully, no need to tamper with the speed or touch the brakes.

While yes, this is still a truck, and a lifted one at that, I felt comfortable cornering and maneuvering at reasonable speeds. Nothing about the Ranger Tremor seemed unstable. Visibility out of the front and side windows was excellent, and the large mirrors gave me both good visibility of the sides of the vehicle, plus clear blind spot warnings. Driving the Ranger on the highway felt safe, fast, and comfortable.

The Ranger Tremor is a blast when the going gets dirty. Of the midsize pickups I’ve driven in the past year, I found the Ranger Tremor the most fun. While “fun” is a little hard to quantify, my reasoning probably boils down to the powerful and very responsive engine coupled with a great 10-speed automatic gearbox.

Driving the Tremor on rough, icy dirt roads gave me plenty of confidence to lay into the throttle for quick acceleration and a little play cutting the rear-end loose in 2wd. I noticed very little turbo lag, and the truck was easy to control even while playing around with some spirited driving.

Unfortunately, due to a lot of heavy snow in April, we were unable to get into any real or challenging off-road terrain. It just wasn’t in the cards with all our local trails closed by feet of snow. But I would relish the opportunity to see how the 9.7-inches of ground clearance – 0.8-inches more than the base Ranger SuperCrew 4×4 — coupled with a 30.9-degree approach angle (up 2.2 degrees from the base SuperCrew 4×4), a 25.5-degree departure angle (up 0.1 degrees) and a 24.2-degree breakover angle (up 2.7 degrees) would perform.

The Tremor edition also rocks FOX 2.0 monotube dampers with rear piggyback reservoirs and hydraulic rebound stops. Ford claims they’re tuned for a comfortable ride on the pavement while offering control over severe terrain. While it’s hard to quantify that in a week of testing, I found the truck to ride great in both situations. On somewhat rough gravel road and highway driving alike, it gave a moderately soft ride that ate up the bumps well. Body roll in corners is considerable though, which is no surprise given that Ford reduced the stiffness of its anti-roll bar in this model to minimize disruption over rough terrain. While that’s a negative for on-road driving, it should help improve comfort for long miles off-road, and provide better articulation.

Finally, if you do screw things up, the Ranger Tremor includes a frame-mounted steel front bash plate and underbody skid plates, rear locking differential, Terrain Management System with four distinct drive modes, and Trail Control (basically off-road cruise control). And if all that won’t get you out of trouble, it also comes with two new recovery hooks in the rear, in addition to the two up front. 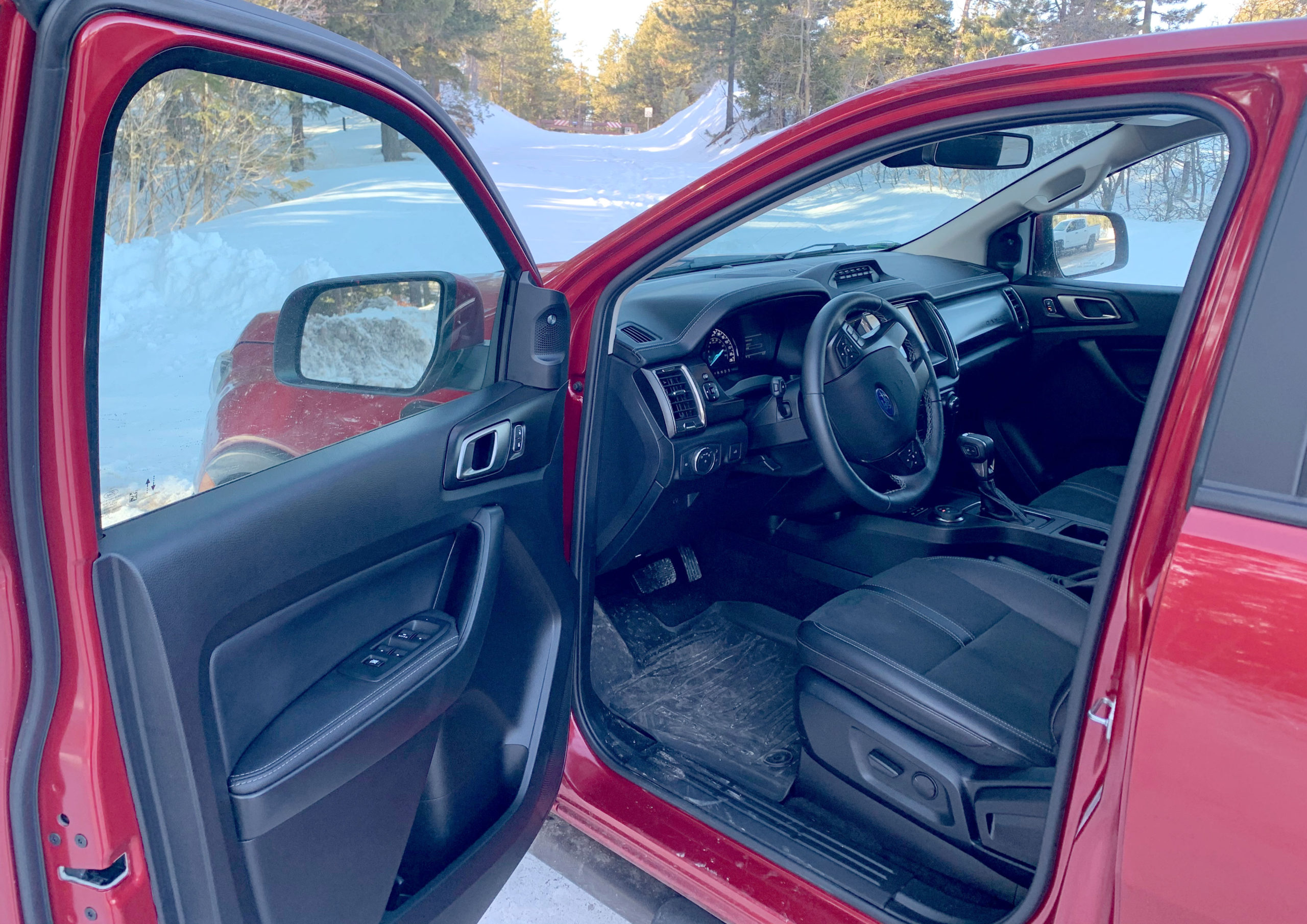 The Ranger Tremor is one of the better-appointed trims in the Ford Ranger lineup. I personally liked the interior, which has upgraded touches like embroidered leather seats and a very nice leather-trimmed steering wheel. Most of the touchpoints, like the center console and driver’s armrest, have soft leather trim. I appreciate that on long drives when I needed to rest an arm or shift position. 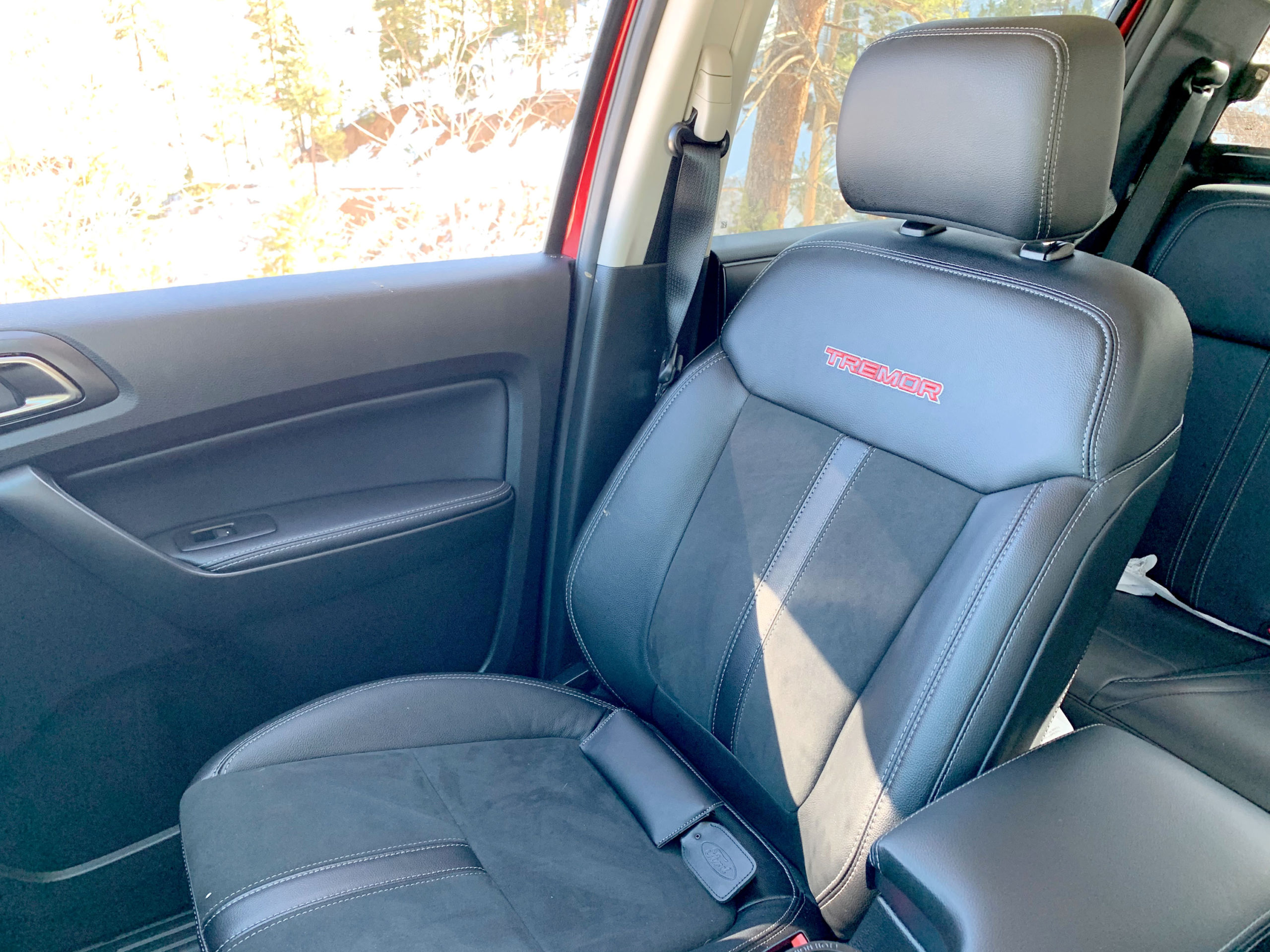 However, the interior does use a fair amount of hard plastic. I personally have no problem with plastic in trucks, as I think it’s practical and easy to clean. For example, a large segment of the dash in front of the passenger is hard smooth plastic. In my mind, that’s great as it’s bound to get dirty when my hunting buddy or dog jumps in with a muddy backpack or paws. It’ll wipe off beautifully. But some reviewers have called out the interior as cheap-feeling. I didn’t get that vibe and found it very practical for a truck. So I guess if you’re like me, and expect a truck to do actual truck work, you’re in luck, as the Ranger Tremor should be easy to keep clean with little more than a wet rag. If you’re looking for diamond-stitched leather, well, maybe look elsewhere.

Beyond that criticism, I really liked the interior. It felt pretty large for a mid-size truck (but still tiny compared with my F-150). The seats were very supportive and comfortable. The dead-pedal gave me a nice resting place for my foot. And the stereo, which is a key consideration for me, sounded excellent, with a nice high soundstage and punchy midtones, bone-shaking bass, and crisp clarity across the range, even at high volume.

For those who will continue building out their Ranger Tremor with additional exterior lights, a winch, or other electronic accessories, the center of the dashboard offers several auxiliary switches. It’s a nice touch, although one that could be annoying if you never use them, like a reminder of unfinished business that’s always staring you in the face.

Ranger Tremor: Who It’s For

If you’ve read this far, you probably think I’m head-over-heels for the Tremor. And in some ways, you’re right. I think it’s a fabulous little pickup truck. I’ve owned older rangers, which I also loved. I drove one for years in the Virgin Islands, and another from Denver to Alaska and back. And while those older Rangers were great, the 2021 model is light-years ahead.

But all is not rainbows here. My biggest gripe with the Ranger? It’s not big enough for me. And yes, I know, it is a MIDSIZE pickup. But after a week of driving it, I cemented my knowledge that, yes, an F-150 is the truck for me. Just driving up to my parent’s house for a long weekend of skiing and minor adventures, I had the Ranger’s interior loaded with gear. The bed was too short for me to sleep in, and I’m only 5’8″. For my bigger adventures, it just wouldn’t meet my needs.

But for a lot of people — honestly, most people — the Ranger Tremor is probably a perfect choice. In-city driving is much easier than in the F-150 or other full-size trucks. That means that it’ll also handle tight trails much easier, allowing you access to places a bigger vehicle won’t go. It has plenty of room inside for four adults, and for the adventurous crowd, the bed will certainly hold a lot of gear. Need more space? The 1,430-pound maximum payload and available 7,500-pound maximum towing capacity, incredibly, nearly matches that of the F-150 of 10 years ago. So feel free to slap on a trailer.

If you’re the kind of person who wants a sporty, fun truck that can haul plenty of weekend gear for a bike-oriented camping trip, consider this truck. If you love some minor after-market modifications that give you extra off-road capability with no wrenching required, really consider this truck. If I were in the market for a mid-size pickup, the 2021 Ford Ranger Tremor would be at the top of my list.

The 2021 Ranger SuperCrew 4×4 with Tremor Off-Road Package that I tested rang in at $48,100 after destination and delivery charges. That would be about average for Ranger Tremor packages, which are available on mid-XLT and high-Lariat series 2021 Ranger trucks with SuperCrew 4×4 configuration. The Tremor Package adds $4,290 to the MSRP. And while you can do a lot of mods yourself for that much money, these factory-installed customizations seem tasteful and appropriate, and come with a factory-backed warranty. Given it would cost nearly as much, if not more to do them yourself, the Tremor Package seems like a reasonable value for offroad-oriented consumers.


The Four Wheeled Strangeness That is The Mustang Mustero
The Mazda BT-50 Is Redesigned But US Customers Will Not Get ...
Five Used Trucks You Should Never Consider Buying
Overland Tools: Garmin GPSMAP 66i vs Garmin Overlander With ...
The New Jeep Gladiator and 10 Jeep Trucks That Made It Possi...
DRIVEN: 2021 Infiniti QX50 [Review]