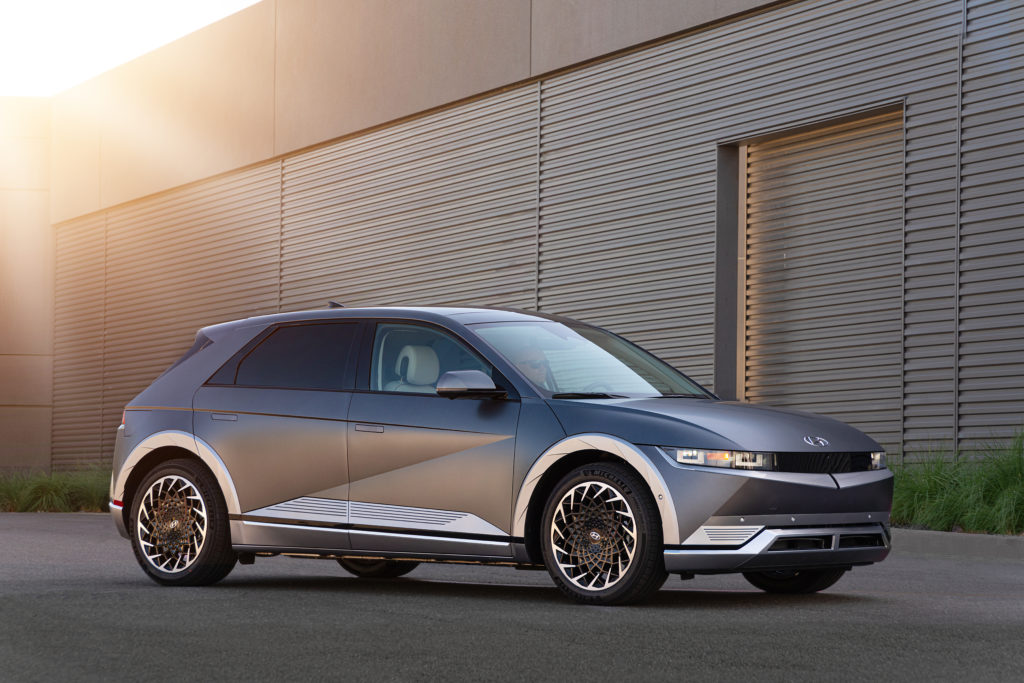 The 2022 Hyundai Ioniq 5 looks exactly like we thought it would from the early renderings. It’s super sharp and has tons of pixelated/digital-looking accents throughout. The shocker is that while its exterior dimensions are that of a mid-sized CUV its wheelbase is the longest Hyundai has ever created (118.1-inch wheelbase). That’s almost 3-inches longer than the 3-row Palisade SUV. What this means is a massive interior and full optimization of Hyundai’s first dedicated battery-electric-vehicle platform. 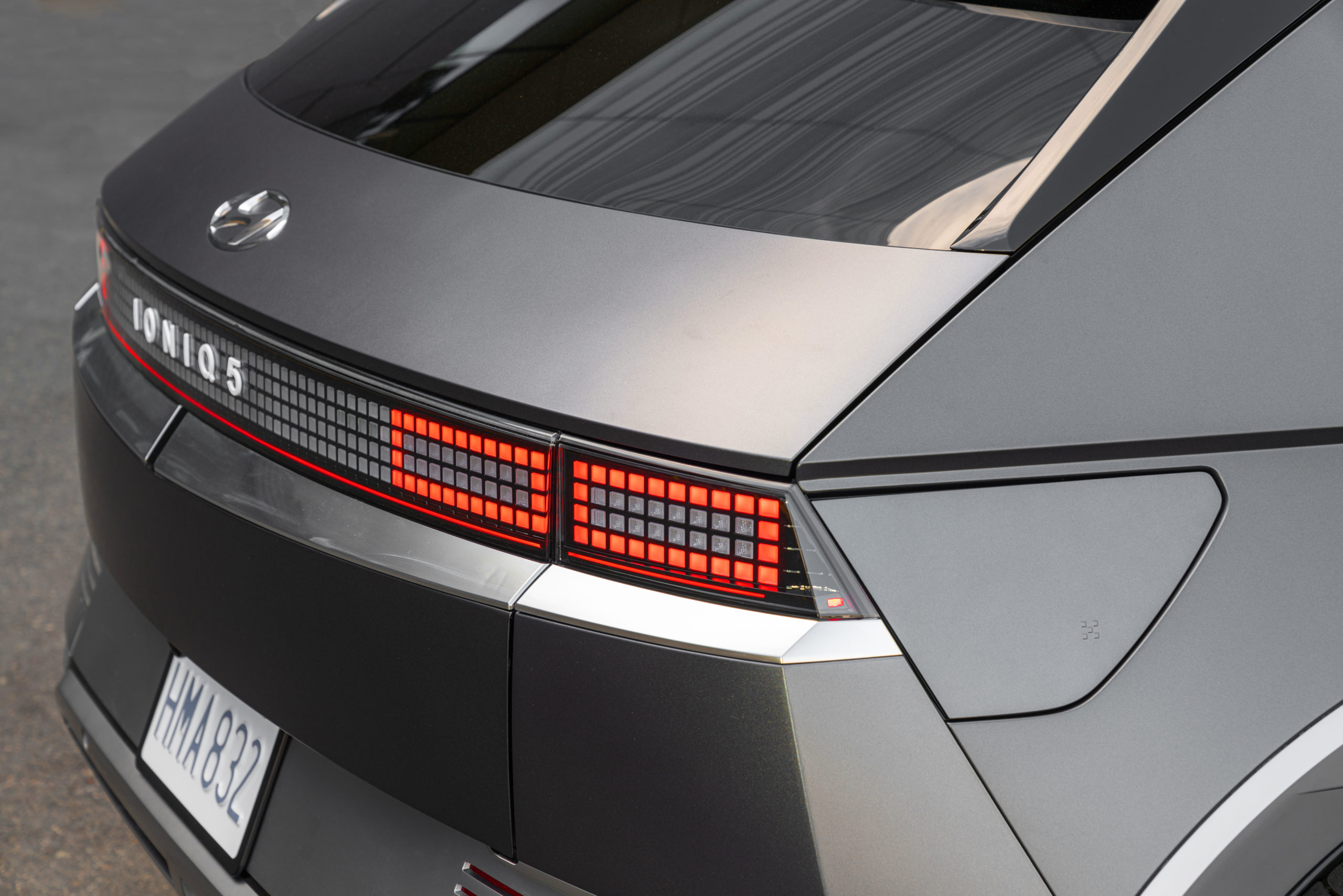 Not much has changed or more revealed about the 2022 Ioniq 5 than we first reported HERE, but below are the new things we found out today and some images of this impressive new vehicle. 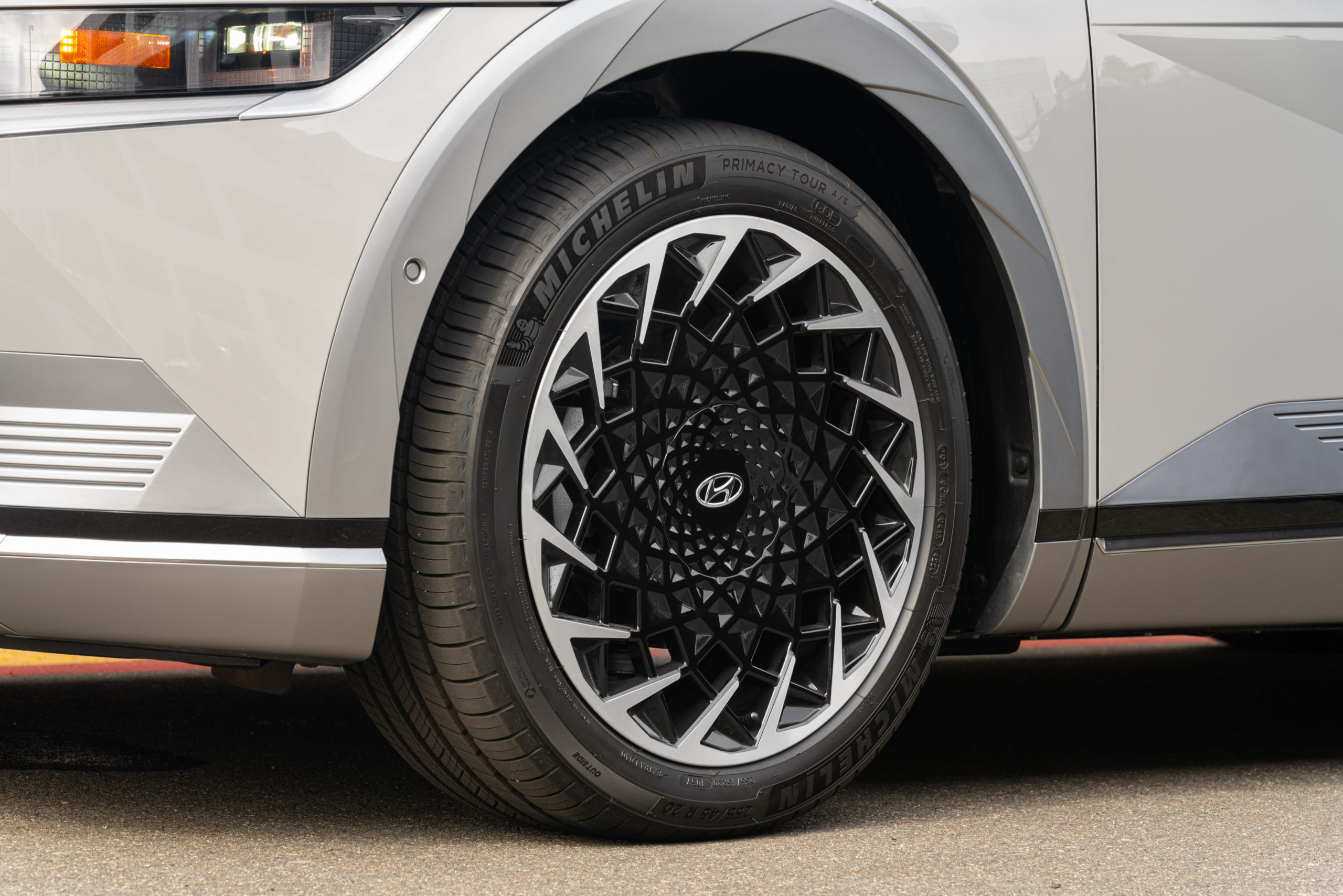 The 2022 Ioniq 5 also has the largest wheels ever offered on a Hyundai. The 20-inch areo-optimized wheels “echo the Parametric Pixel design theme” found throughout the vehicle. They look both OEM and aftermarket at the same time, as well as classic and futuristic. While they aren’t for everyone, we think they’ll be remembered and admired in the future. 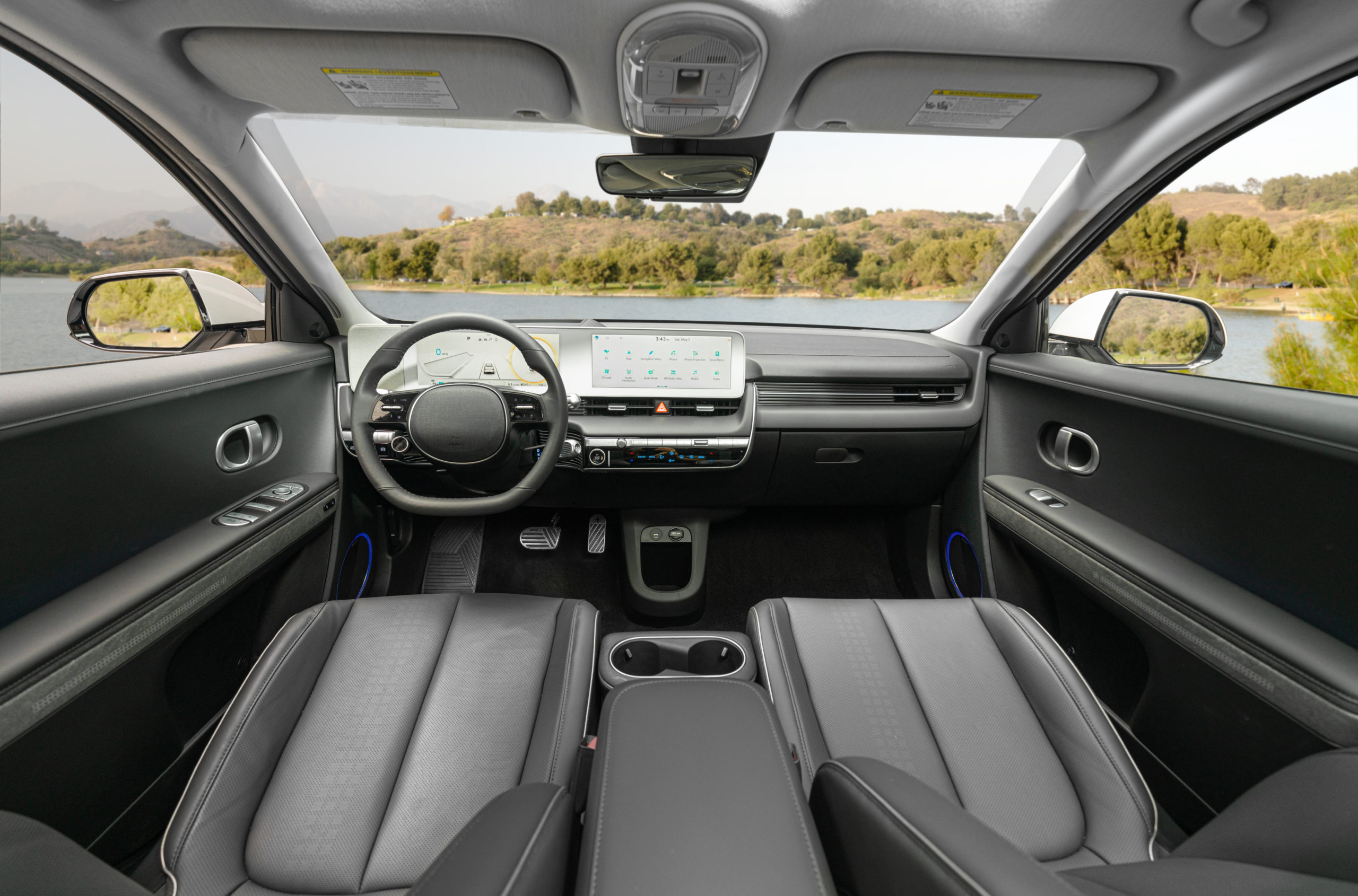 One of the cool new things we spotted on the Ioniq is a new take on an old classic, the column shifter. The Ioniq 5 has a column-mounted drive selector. On the end of a stalk coming out of the steering column is a small dial that is used to select the drive mode, ie: drive, park, and reverse. This is a departure from the buttons on the center console that the current Ioniq Electric employs, and we think an upgrade.

A bit of a letdown is that the new Ioniq 5 can only tow up to 1,500-pounds. While that’s plenty for a tiny trailer and motorcycle or some garden supplies, it’s not good for much else. 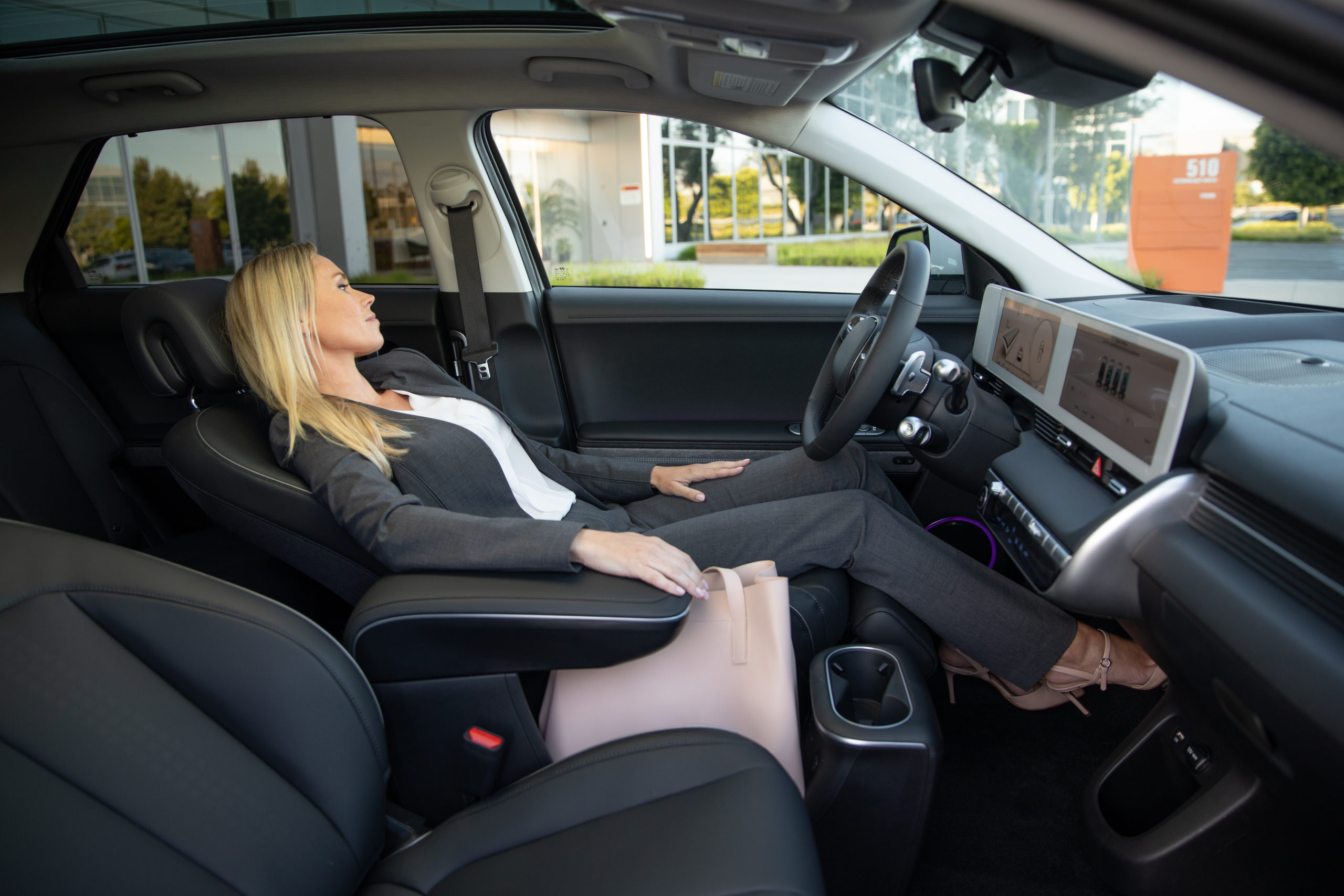 As expected, the 2022 Ioniq 5 is going to be a sparse minimal interior, but packed with tech. Highlights are an augmented reality HUD, Bose audio system, ambient lighting system, dynamic voice command system, and auto parallel park, just to name a few.

Hyundai’s Bluelink app offers remote start, remote climate control, can make online payments, and so much more. The app might be the gold standard for automotive mobile apps. 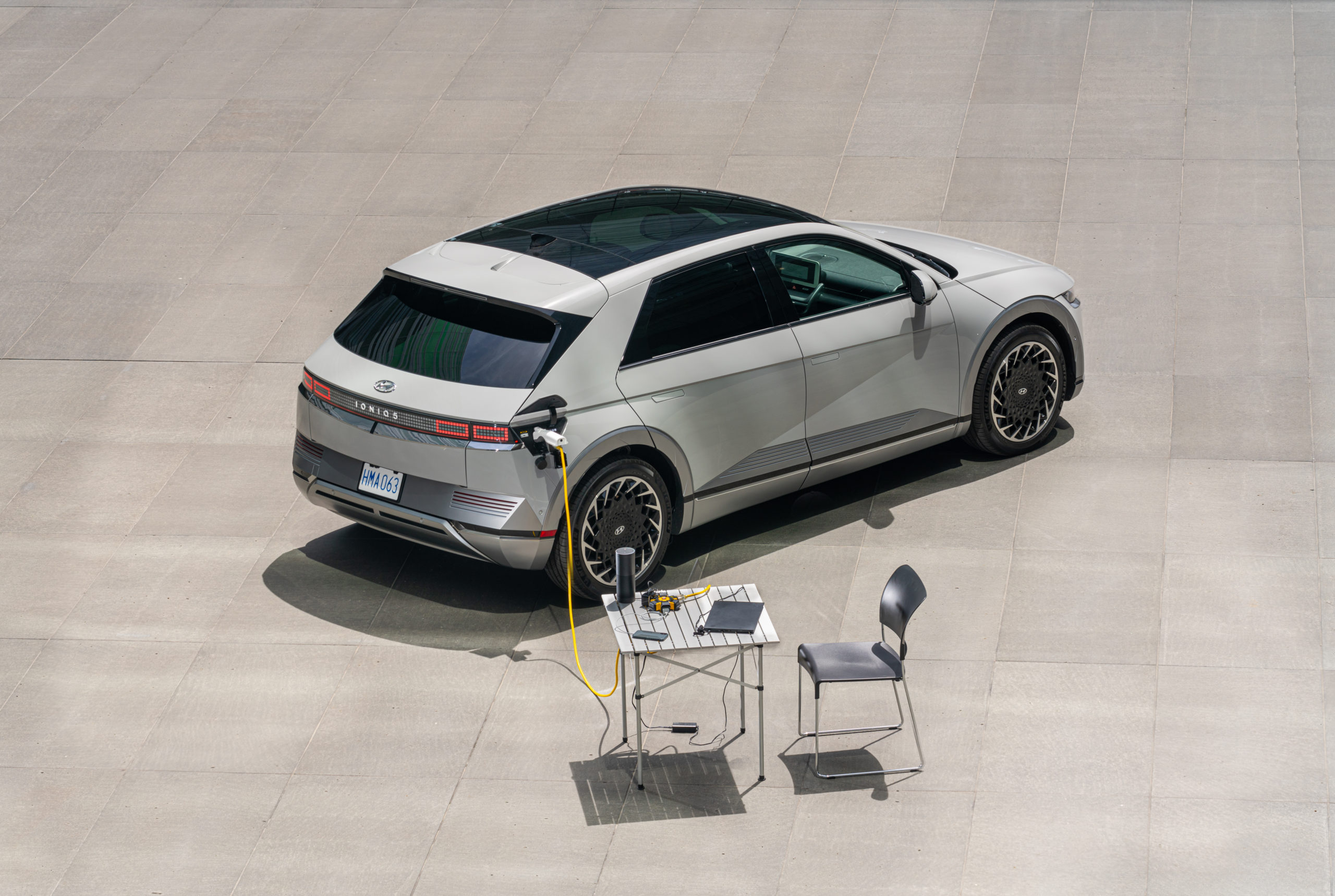 Of course, the Ioniq 5 is all about electric power. Not only does it charge super fast, 10-80% in just 18-minutes when using an 800-volt charger, but also works to charge other items. Bi-directional charging allows you to use the Ioniq 5 as a “power-strip on wheels.” 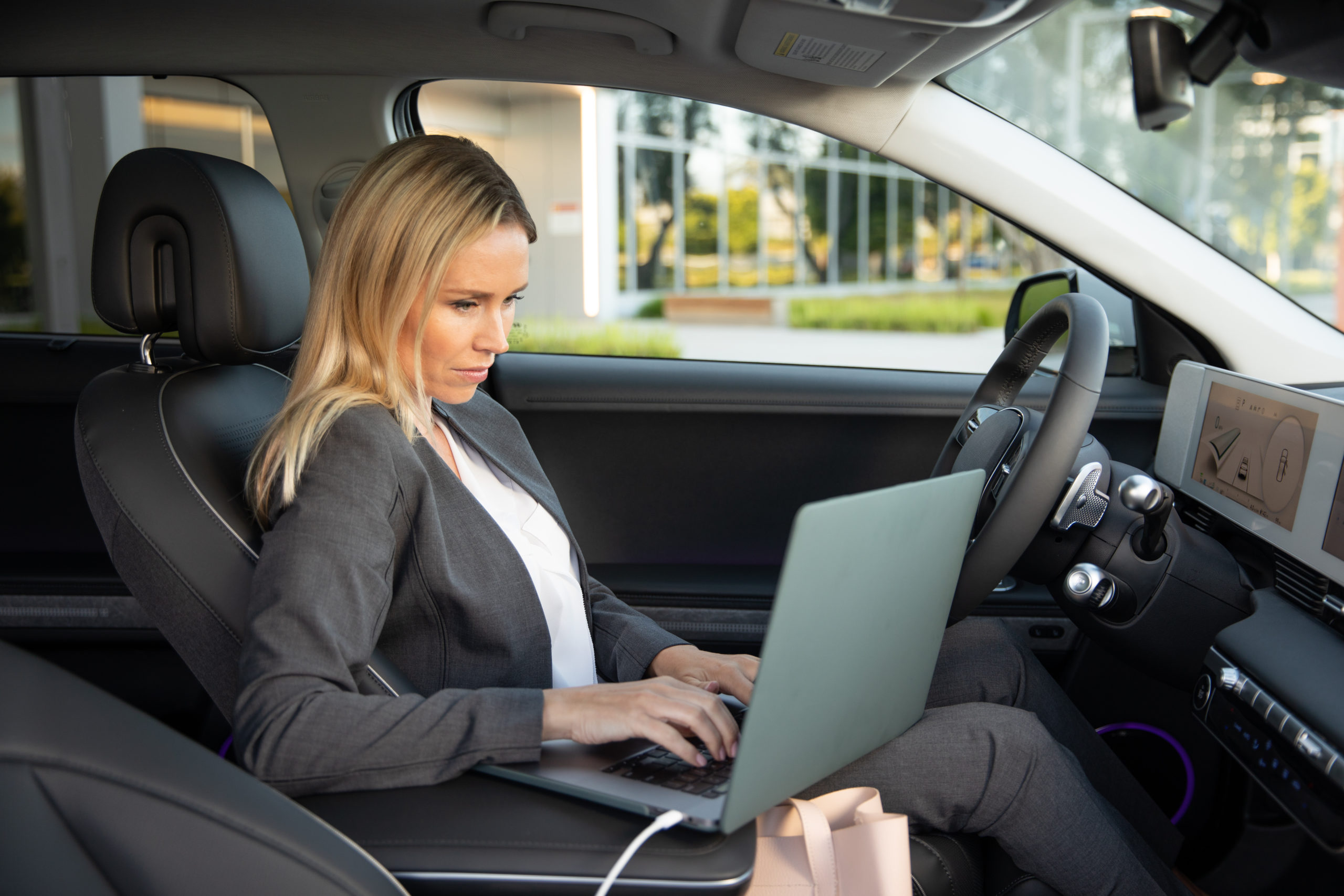 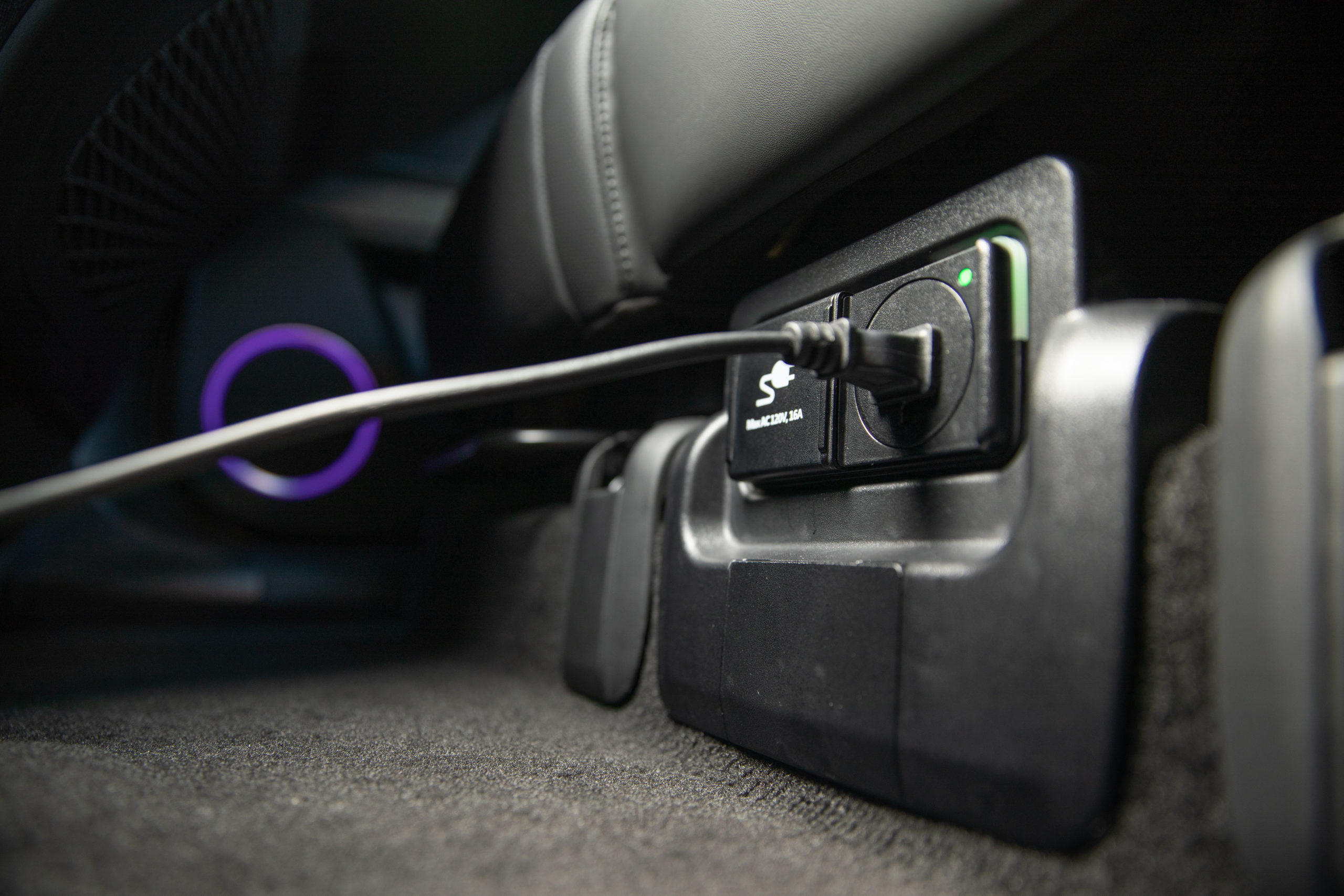 Impressive horsepower, a quality range of 230-300 miles depending on setup, and optional AWD are all on offer with the 2022 Hyundai Ioniq 5. 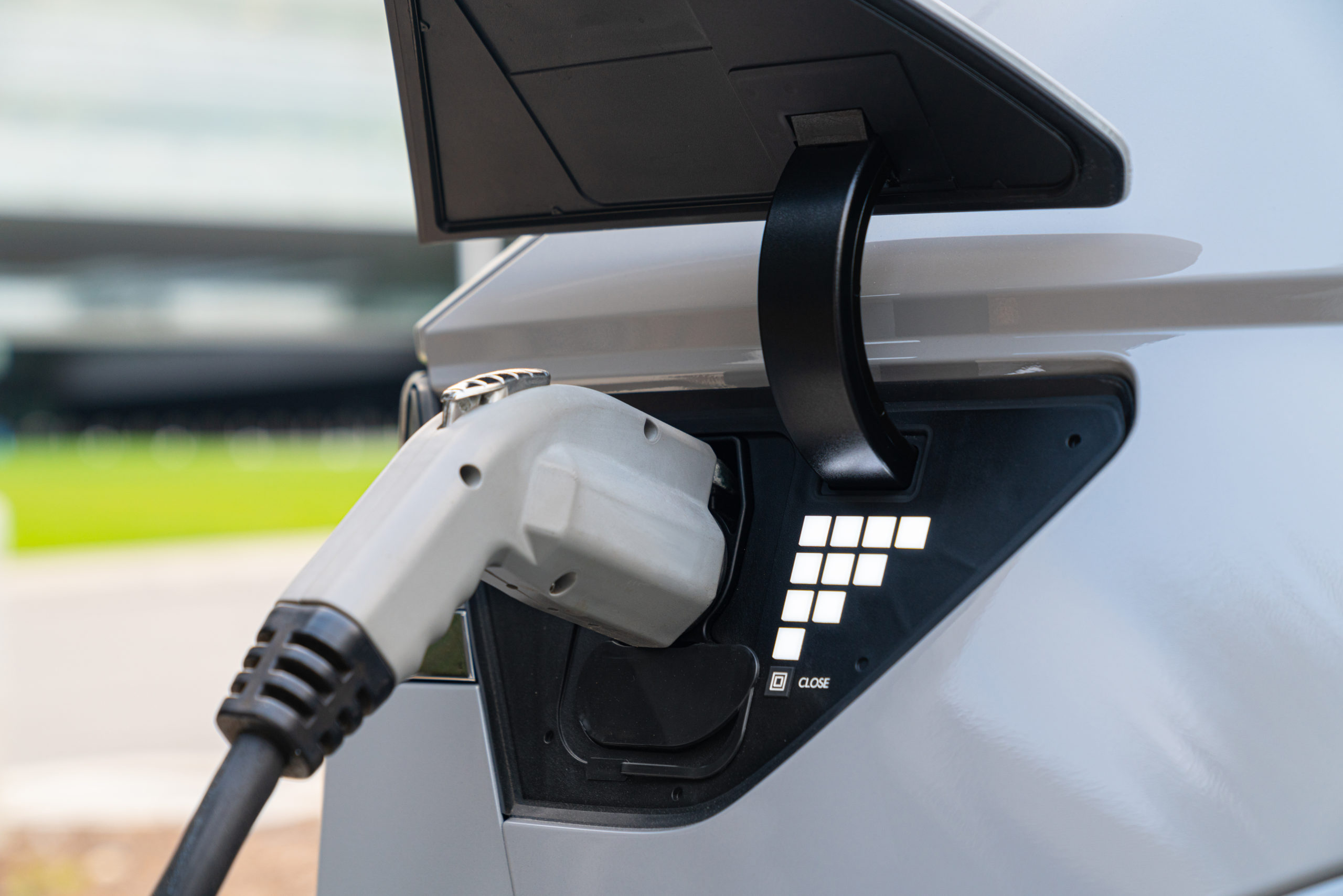 Another great perk of owning an Ioniq 5 is unlimited 30-minute charging for 2-years at Electrify America charging stations, one of the largest networks of fast chargers in the country.

“With 600 public ultra-fast charging stations operational in less than three years – and growing at an impressive pace – Electrify America is prepared to meet new IONIQ 5 drivers where they are and give them the confidence to travel to new destinations with ease,” said Giovanni Palazzo, president and chief executive officer of Electrify America. “We are excited to continue our collaboration with Hyundai as the industry comes together in support of the future of mobility.”

Ioniq as a Brand 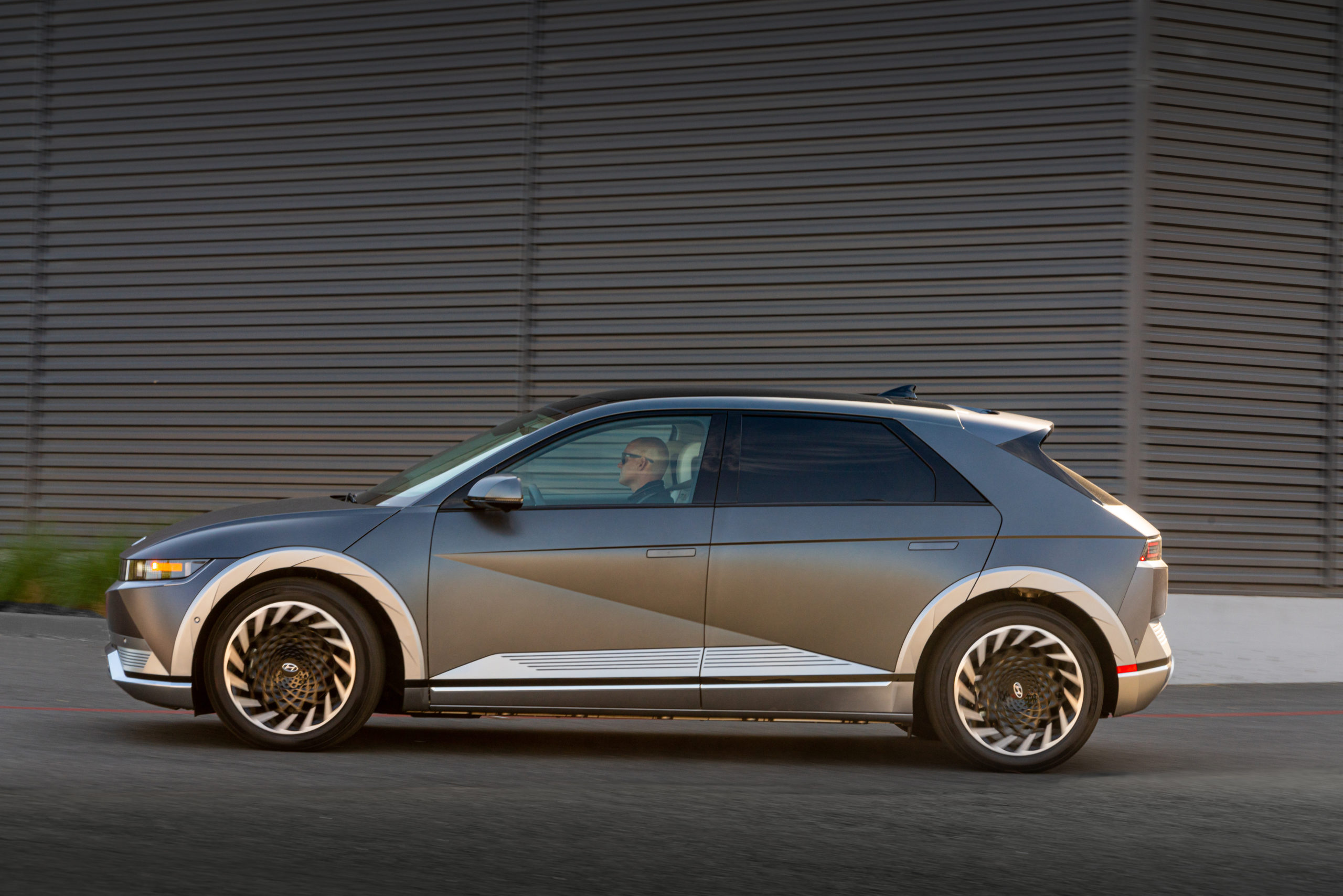 The 2022 Ioniq 5 marks the first vehicle in Hyundai’s new Ioniq subbrand, versus just the name of a single model in its lineup. Next up will be the Ioniq 6 sedan in 2022 and Ioniq 7 SUV in 2024, for the U.S. market. Hyundai plans to introduce 23 battery-electric-vehicle (BEV) models and sell 1 million BEV units worldwide by 2025. Lofty goals, but if the Ioniq 5 is any indication, Hyundai is on the path to success.

There are still EPIC lease deals on offer on the electric 2020/2021 Hyundai Ioniq. So much so that I couldn’t pass it up and leased one for my wife as a commuter car. $200/Month Total Ownership Cost: How I Scored An Insane Electric Car Lease Deal 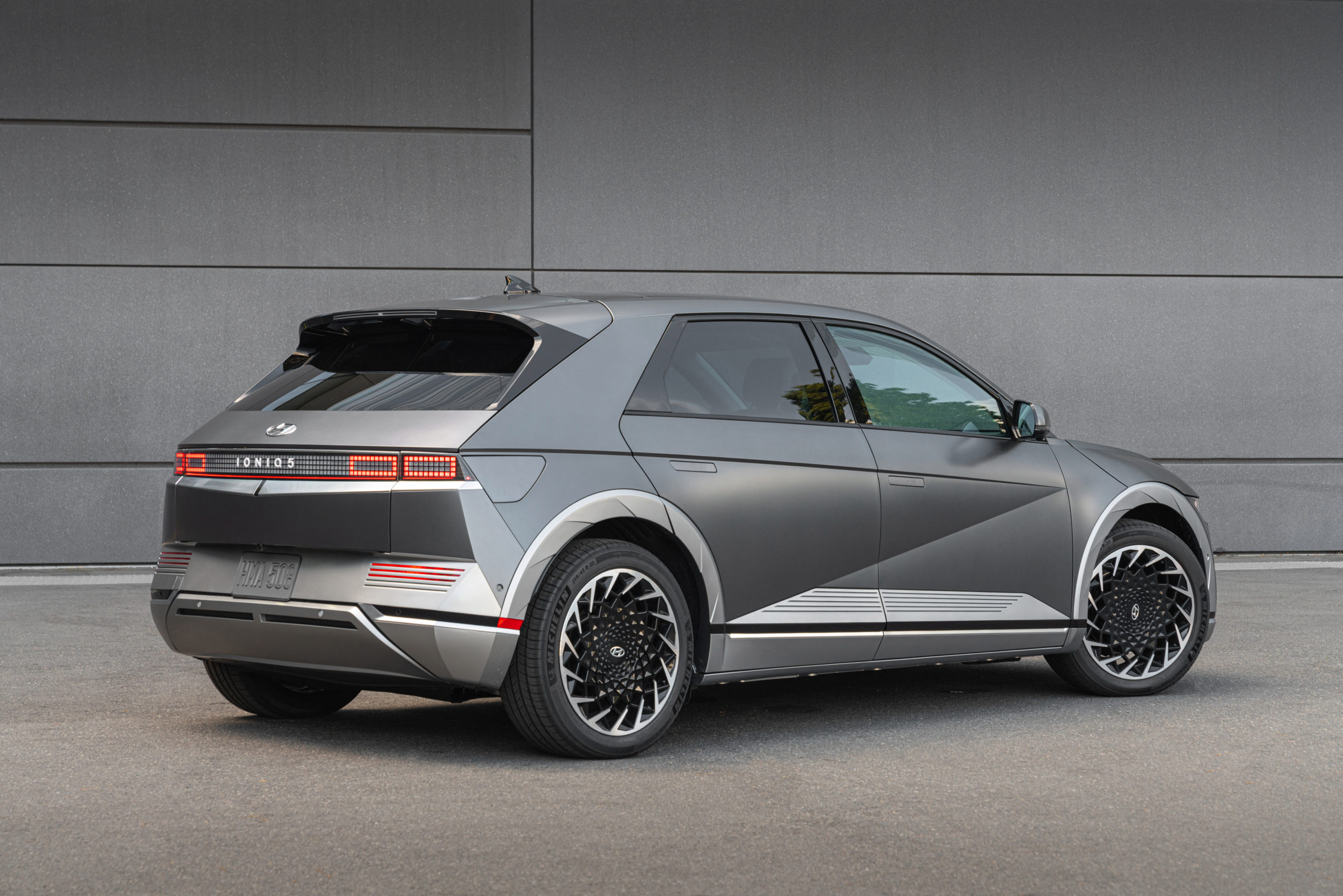 
Chrysler Me-412 - the Prototype That Will Never Be
10 Expensive SUVs Worth Their Price Tag (And 5 That Aren’t)
Third Time's A Charm: SSC Tuatara Sets World's Fastest Produ...
The Evolution of the Convertible SUV
Hennessey VelociRaptor 400 Bronco: Incredible Stallion on St...
Best of 2019 Bentley