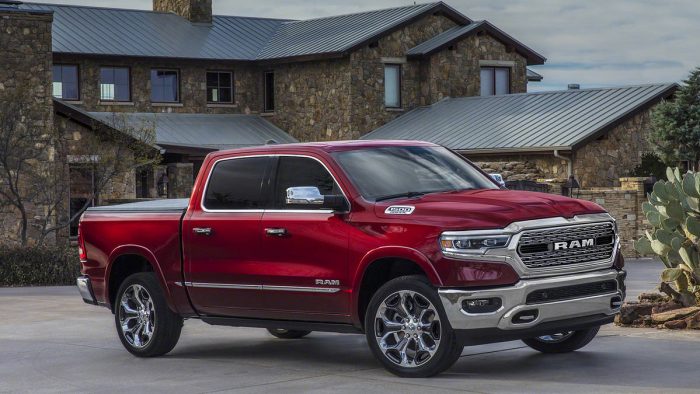 If you’re in the market for a new truck, we’ll try to help you out by highlighting some of the best choices out there. You can take a look at our choice of the best trucks 2020 has to offer, but biding your time and waiting to see what MY 2019 will have to bring might be even more sound of a choice. After all, most of 2019’s trucks will be available in a few months time, and there are a number of important updates to their respective lineups coming our way. Luckily, you won’t have to rely on press releases as you’ll be able to find that out in the following lines. Regardless of their size, here are the most exciting and arguably the best trucks 2019 is bringing our way.

What Is The Best Truck To Buy From The 2019 Selection?

The 2019 Chevrolet Silverado will be an all-new fourth generation model as we’ve been able to find out from this year’s Detroit auto show. As opposed to the current model, the new Silverado finally incorporates the use of aluminum panels. Thanks to the aluminum doors, hood, and tailgate, the new model will be up to 450 pounds lighter than the current Silverado. Not only will this help with fuel economy, but should help improve the 2019 SIlverado’s handling as well. Some people will likely be repelled by its polarizing new design, but the new full-sized pickup emphasizes on tech and practicality; i.e. a truck for the modern age. The new power-retracting tailgate, a wide bed floor, and a multitude of other new features attest to that. Bear in mind that the powered tailgate only comes standard with the top tier High Country models.

The all-new Chevy Silverado will offer up to 6 different powertrain combinations including the new 3.0L Duramax inline-six diesel engine and the 10-speed automatic transmission. It’ll also come in no fewer than 8 different trim levels including – from least to most expensive – Work Truck, Custom, Custom Trailboss, LT, RST, LT Trailboss, LTZ, and High Country. The all-new Custom Trailboss and LT Trailboss will emphasize off-roading by providing a specially-tuned suspension with 2 additional inches of ground clearance, a locking rear differential, Rancho shocks, a skid plate, and off-road tires. The RST trim, on the other hand, pays more attention to on-road performance by providing 22-inch wheels wrapped in all-season rubber. All things considered, I don’t doubt the new Silverado will have any issues going into model year 2019 strong. It arrives after its predecessor ran for only 5 years which speaks volumes about GM’s intentions. 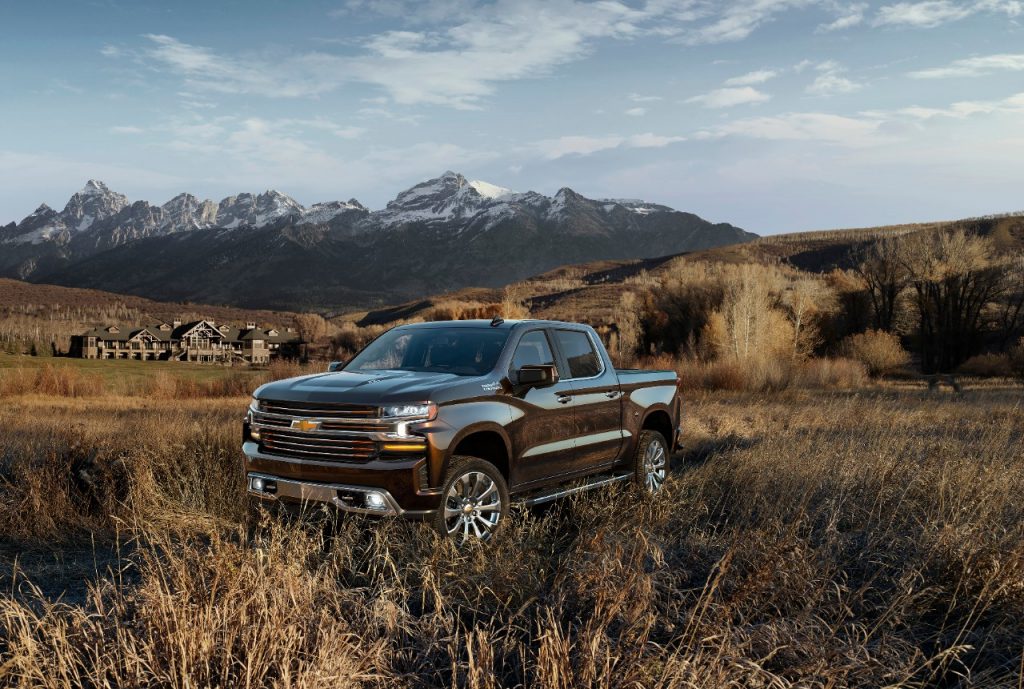 GM brass knows it wouldn’t be very business-savvy to redesign the Chevy Silverado without doing the same with the GMC Sierra. Unlike its stablemate, which had already been presented at the 2018 Detroit auto show, the 2019 GMC Sierra has yet to be officially unveiled – a feat that will likely happen at the 2018 Chicago auto show. Keen eyes have already caught the full-size pickup truck test mules, however. It’ll feature body revisions to the front and rear ends, but unlike the more rounded Silverado, the Sierra will apparently sport a more squared-off look. Moreover, it will also get the same wider bed and electronically-operated tailgate treatment as the Silverado.

Despite a scarcity of information on the new Sierra (mostly due to General Motors directing all their efforts at promoting the Silverado), we already know what engines the full-sized truck will have. As you might have guessed, the lineup will be carried over from outgoing models with the addition of the Duramax inline-six diesel. In other words, the new Sierra will share the entire powertrain lineup with the Silverado, with the other three options being the 4.3L V6 and the 5.3L and 6.2L V8s. Although they won’t become the greenest of engines overnight, the V8 duo has been substantially updated with fuel economy in mind. They’ve been able to shut off unneeded cylinders before, but instead of deactivating the entire bank, they can now do so for individual cylinders. Thanks to all the advancements they’ve made, the Silverado and Sierra should easily become some of the best trucks 2019 will bring to market. 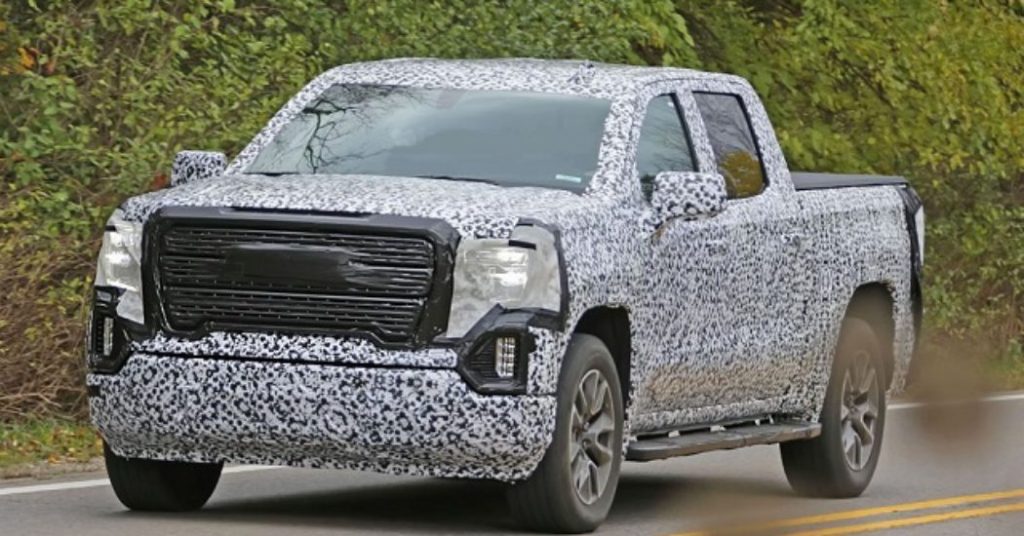 It’s not exactly the express return to the U.S. shores for the Blue Oval’s mid-size truck, but better late than never. After getting the ax prior to MY 2013, the North American markets were some of the few places on the planet where you couldn’t order the Ford Ranger. The mid-size pickup truck market itself went through a tough period, too, but all that is finally behind us, and so the prodigal son returns. Ford is promising it’ll be better than ever and we tend to believe them. After all, the 2019 Ford Ranger is an entirely different vehicle compared to its predecessor from the beginning of this decade. It’s much larger, to begin with, and much more contemporary in every single way.

Despite being heavily adjusted for the U.S. market, the American-made 2019 Ford Ranger very much resembles its overseas siblings. Main discrepancies can be found underneath where the U.S.-spec Ranger sports a special suspension, Dana axles, and a fully-boxed frame. The only confirmed engine for now is the 2.3L EcoBoost 4-cylinder which can also be found in the sixth-gen Mustang. It’ll be backed by a 10-speed automatic transmission, but Ford still hasn’t released the setup’s full specs. Other than that, expect an EcoBoost V6 as an option as well, but likely not from the get-go. Ford is also promising best-in-class payload capability and the best fuel economy among the gasoline engine-powered competitors. We’ll have to wait for the rest. 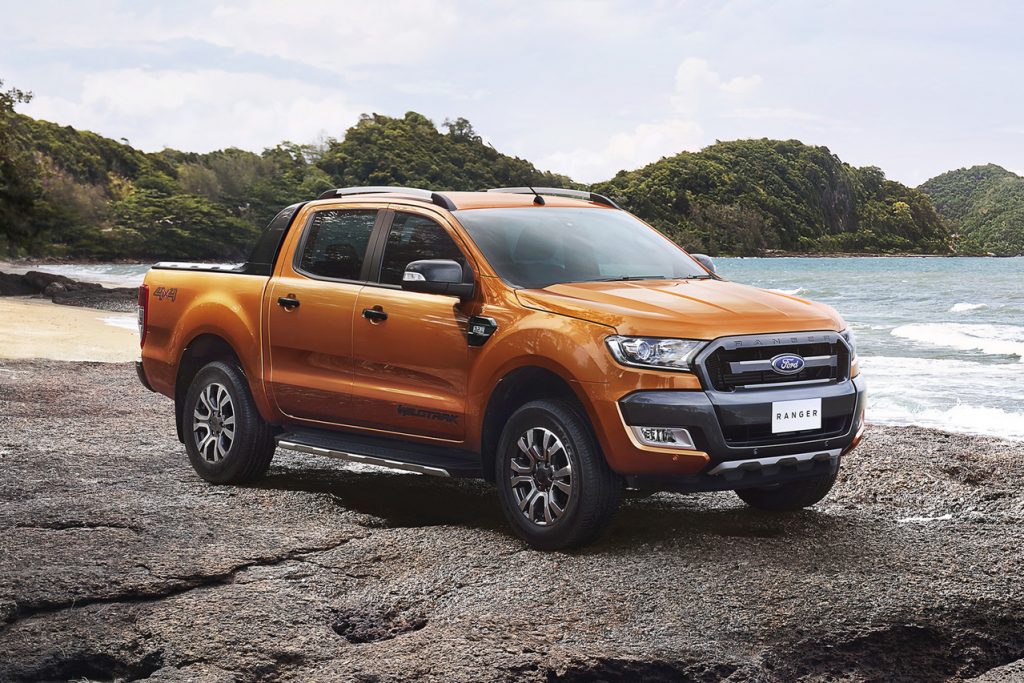 The long-awaited Jeep Wrangler Pickup is another new arrival for MY 2019. Based on the all-new JL-generation Wrangler, the rugged pickup truck aims to fill the void created by the disappearance of the XJ Cherokee-based Jeep Comanche. Mind you, that happened more than 25 years ago and the upcoming Jeep Wrangler Pickup will be the company’s first truck since. Despite the fact very little is actually known about it – including its name – the 2019 Jeep Wrangler Pickup is still one of the most anticipated and likely one of the best trucks 2019 will have to offer.

One of the precious few official details about the upcoming Wrangler truck is its fold-down canvas soft top. Taken straight from the new JL-Wrangler, the soft top will be optional. Moreover, the Wrangler Pickup’s production will likely commence in November 2018 at the Toledo, Ohio plant from which the Jeep Wrangler itself comes into the light of day. On the blurry side, we still don’t know anything about its possible powertrain lineup, but that’s another feature it might end up sharing with its SUV sibling. There are some rumors that the Wrangler Pickup might actually be named after the Jeep CJ-7 Scrambler whose popularity has soared in recent years. Whatever the case, we can safely assume the 2019 Jeep Wrangler Pickup will be one of the biggest sensations of MY 2019. 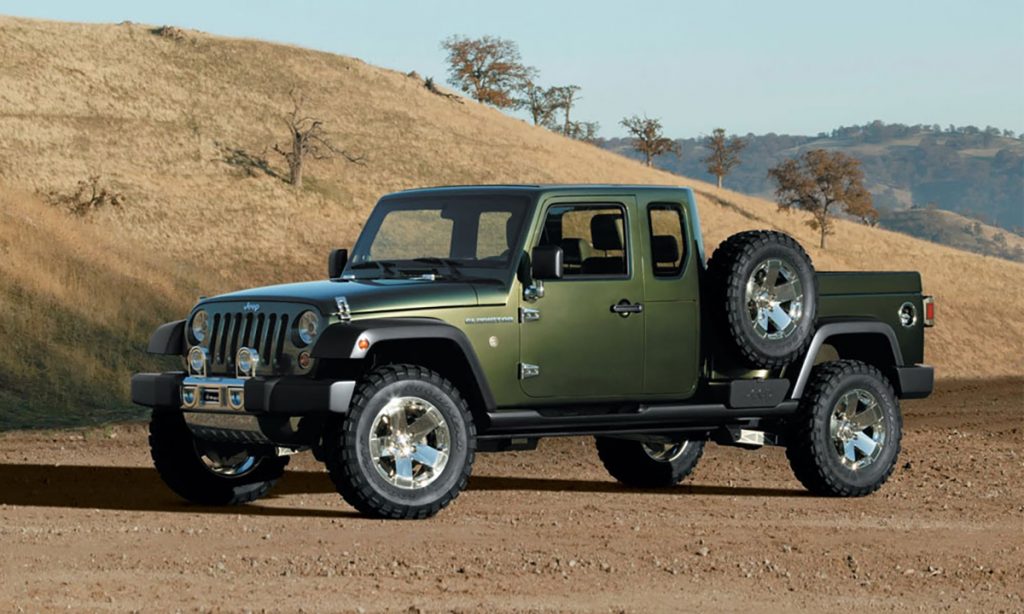 Unlike the aforementioned new arrivals, the 2019 Ram 1500 follows the Silverado 1500’s example by ushering into a new era for the full-sized pickup. The fifth-generation of Ram trucks has been revealed and stylistic ties with the Dodge era trucks have finally been severed. The crosshair-styled grille is dead! Long live the crosshair-styled grille! Other than a truly refreshing look that’s first been implemented with the introduction of the Rebel trim a couple of years ago, the 2019 Ram trucks boast more comfort, luxury, and tech features than ever before. The Ram pickup has never been a best-seller, but FCA clearly knows where its strengths lie. They’re hunting for the first-time truck buyers and they’re doing one hell of a job at it. No surprise, then, that Ram’s market share grew from 16 to 22 percent during the last decade.

The 2019 Ram 1500 doesn’t only bring a complete set of styling changes, but an update to the powertrain department as well. First and foremost, a diesel option will return to the fold sometime during the 2019 calendar year. Before the oil burner makes a comeback, the fifth-generation Ram will make due with either a 305-horsepower 3.6L V6 or a 395-horsepower 5.7L V8. Both are receiving the FCA’s eTorque mild-hybrid system which replaces the alternator with a small generator that feeds a corresponding 48-volt lithium-ion battery pack. The former gets it as a standard feature, while the pushrod V8 gets it as an option. Given the fact the new Ram is larger and more than 200 pounds lighter on average, it’ll also be able to haul more and load more than its predecessor. However, the Max Tow package option will have to be selected in order to get the most out of your new Ram 1500.

The return of the aforementioned Ford Ranger to the U.S. market will have a detrimental effect on sales of every single mid-sized pickup truck out there. This should especially hurt GM’s Canyonado duo that’s single-handedly revived the compact truck market a few years back. This should be ever more the reason for the 2019 Chevrolet Colorado to offer something new in order to reassure potential buyers that it still deserves to be regarded the number 1 choice. General Motors will duly deliver these changes in the face of a mid-cycle refresh for their best-selling small truck.

Other than a refreshed look, the 2019 Chevrolet Colorado is unlikely to offer too many new features, though. A possible addition of another trim level, some equipment-shuffling within current trims and the possible addition of an optional sunroof are the most likely of options. There’s also a possibility the new Colorado will offer additional powertrain combos. A new 10-speed automatic transmission could find its way into the smaller of GM’s trucks as well as the Silverado. Then there’s a possibility of the all-new 2.7L twin-turbo 4-cylinder making it there as well. It’s still too early to tell, but such drastic changes for a mere mid-cycle refresh wouldn’t surprise us considering all the 2019 Ford Ranger talk. One thing is for certain. The 2019 Chevrolet Colorado will have to do a lot in order to remain among the best 2019 trucks. 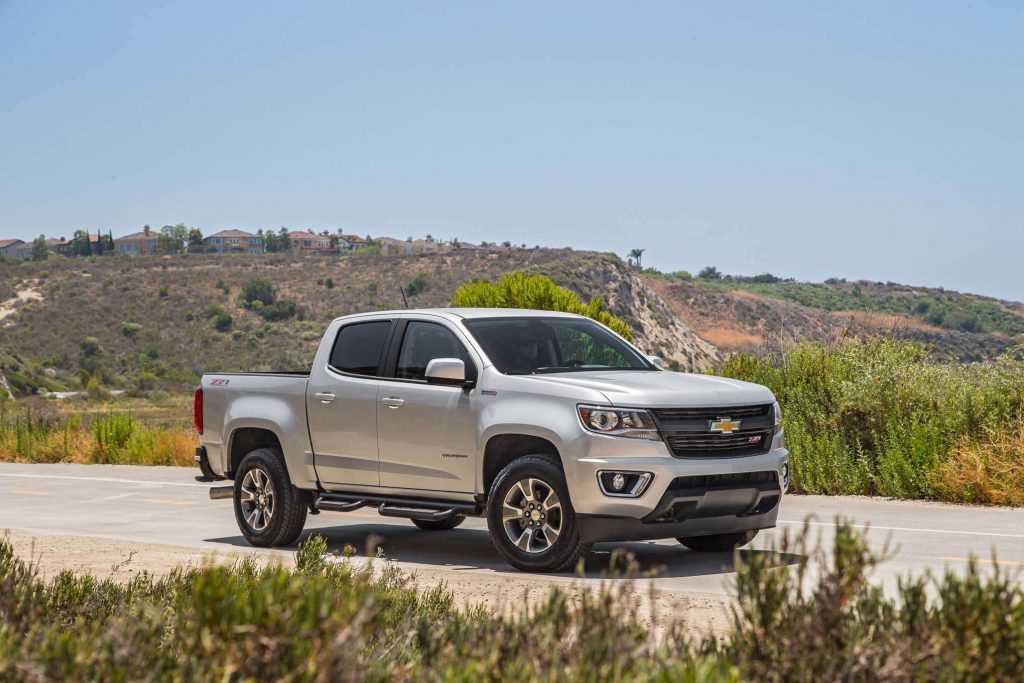 The best selling vehicle on the U.S. market is rightfully among the candidates for the best truck 2019 will bring to market. The Ford F-150 has been the go-to full-sized truck for many Americans over the years, and there’s simply no going around that. The 2019 model year won’t bring any significant changes, though; not due to the Blue Oval’s lack of intent, but simply due to the fact the F-150 already underwent a mid-cycle makeover last year. Ford says the F-150 is even tougher, smarter, and more capable now that the latest in the long line of the F-Series advancements has been completed.

The 2019 Ford F-150 will again be offered with the choice of three different V6s and the last surviving 5.0L V8 mill. But that’s not all. With all of their major competitors jumping on the diesel bandwagon, the good folks from Dearborn didn’t have much choice but to do the same. They’ve recently announced the 2019 F-150 will add another engine to the lineup and that engine will be a 3.0L turbodiesel V6. The engine is rated at 250 hp and 440 lb-ft of torque which should be enough to tow up to 11,400 pounds and haul a maximum payload of 2,020 pounds. All available engines will be offered with the new 10-speed automatic transmission. The only thing that remains now is to kill some time before 2019 models arrive. We’ve hopefully done enough to draw your attention to what we believe will be the best trucks 2019 is bringing our way. 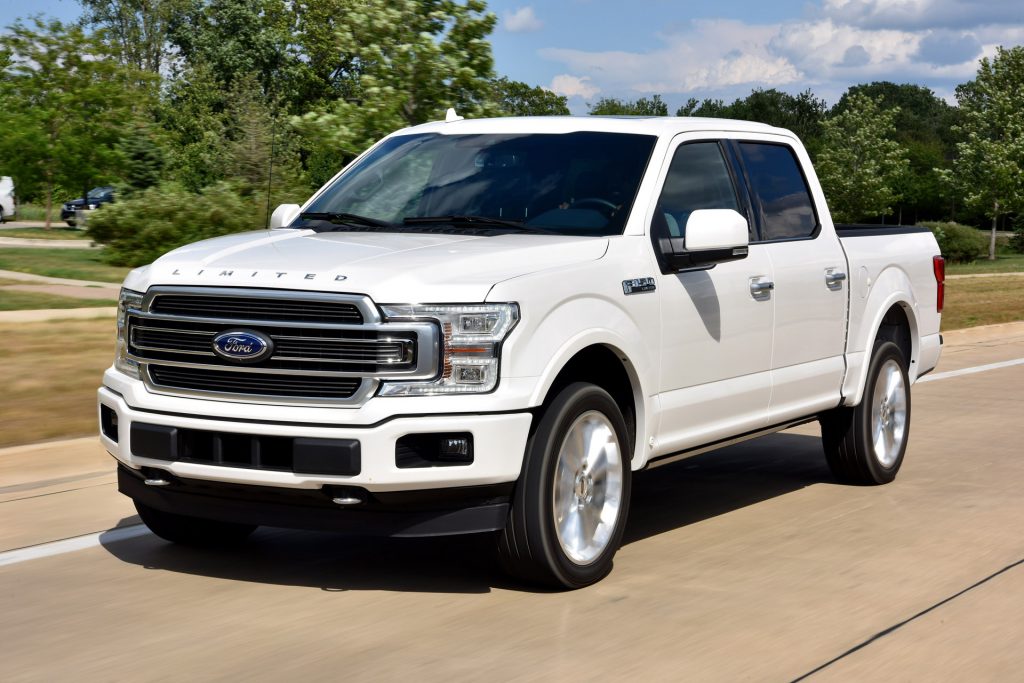