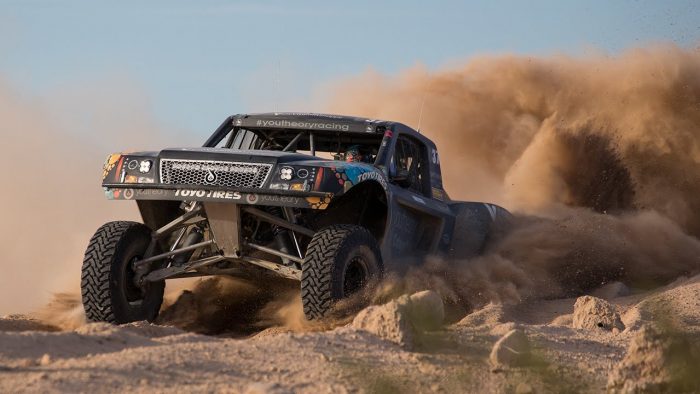 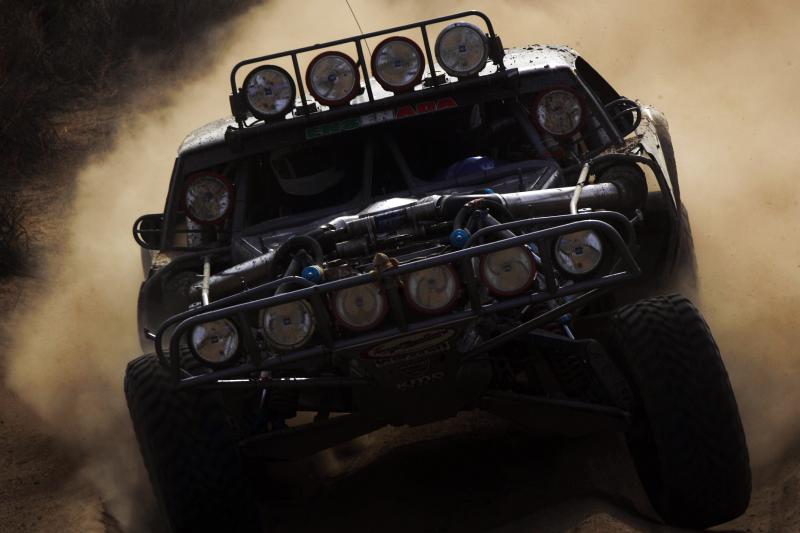 Trophy truck racing is a fascinating sport. Watching it from afar, it is hard to imagine how much research and development goes into building a truck that can withstand the grueling terrain and heat of the desert. When you throw in that the design has to keep its occupants safe, you can understand how a truck can easily cost up to $1 million. Today, we are going to look at a little bit of the history of the Trophy Truck racing class, then 10 of the most badass trophy machines ever built. 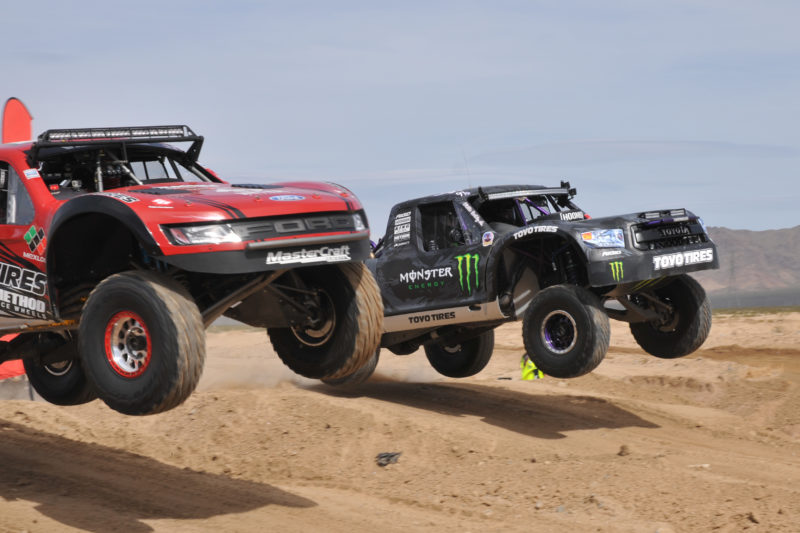 Gearheads have been engaging in desert off road racing for decades. We are pretty sure unofficial desert races have been taking place as long as there have been cars and trucks tough enough to tackle the terrain; however, desert racing has been quasi-organized since the early 60s. In the early years just about every conceivable type of vehicle was used in competition, including purpose built vehicles designed solely to take large amounts of punishment. The problem with a no-holds barred approach was that competition wasn’t very fair to low budget entrants. Since there was not a level playing field, official recognition was withheld. Why race cars, when trucks are there instead?!

That was remedied in 1994 when the Trophy Truck class was born. The creation of the class leveled the playing field by stating exactly what constituted a trophy truck. Most trucks use a a 4130 chromoly steel tube-frame chassis with a steel tube roll cage. This alloy is used because it is durable and lightweight, but others compositions are acceptable. A proper truck can be powered by either a gasoline or diesel engine. Gas engines have to be naturally aspirated. Ford and Chevy V8s are the most commonly used gasoline powertrains in the class. The usual output from these powerplants is between 850 and 900 hp and 900 lb-ft of torque. Diesel engines can be equipped with twin turbochargers. Diesel powerplants need to have a minimum displacement of 5.0L, but no more than 6.6L and are required to have an air restrictor. The engines can be mated to either a three-speed automatic or six-speed sequential transmission.

Underneath, the suspension has a maximum travel of 26 inches in the front and 32 inches in the rear. As a general rule of thumb, these trucks use an independent A-arm suspension for the front, but a four-link setup and a solid rear axle are used out back. The trucks sit on 39 inch rubber and 17 inch wheels. The minimum total wet weight of a trophy machine has to be 3500 lbs. Some race shops like Jimco, Gieser Bros, Racer Engineering, Brenthel Industries, and ID designs build turn-key models, and CAD engineered Baja kits and the like, but many race teams build their own trucks and race them at prestigious events from local races to the likes of the Dakar Rally!

Well, enough about the racing group. Let’s get into the ten most badass trucks ever built. Well, in our humble opinion any way. 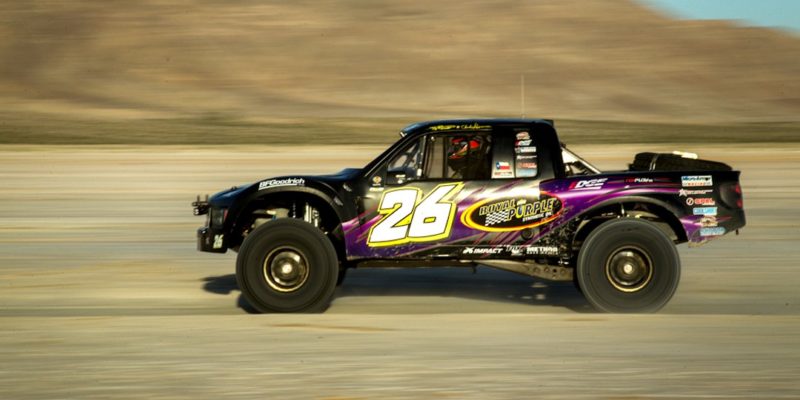 Have you ever met a race car driver who didn’t want more speed? Truck drivers are no different. They want as much speed as possible, even it if kills them. Jay Reichert of R&D Motorsports had speed on his mind when he set out to break the world land speed record for a truck in full racing configuration. His goal was to beat the existing record of 126 mph. His best run with his Ford F-150 SVT Raptor truck was 136 mph. He is claiming the speed record for an unmodified truck, but official Guinness World Record status has yet to be granted.

For clarity, this record is for trucks only. The overall world land speed record of 763.035 mph was set by Andy Green in the jet-powered Thrust SSC. 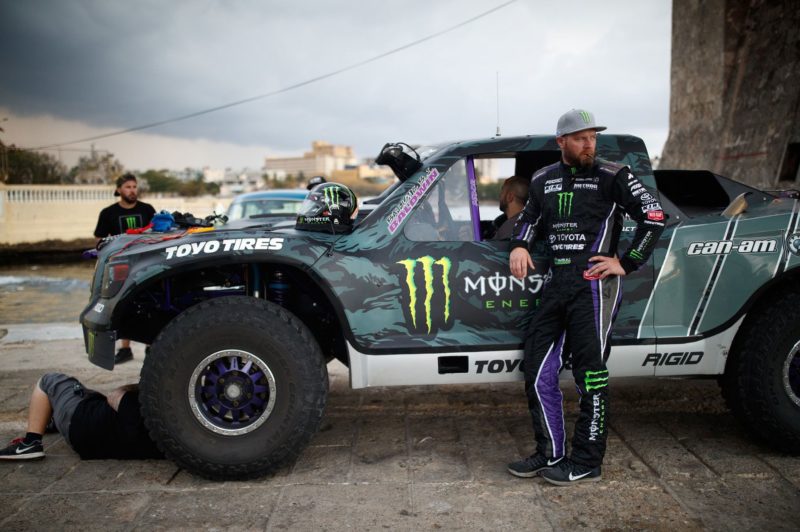 Every truck driver needs a good truck. BJ Baldwin has found several over a career that includes being a four-time off-road racing champion and the complete master of hundreds of other dirt race endeavors. One of the best trucks he has had in his stable is the truck dubbed Fedor.

Fedor is powered by a Kroyer 7.5L naturally aspirated V8. The powerhouse creates 800 hp and 690 lb-ft of torque. It is capable of hitting some of the hills and sand dunes at over 100 mph during a race! 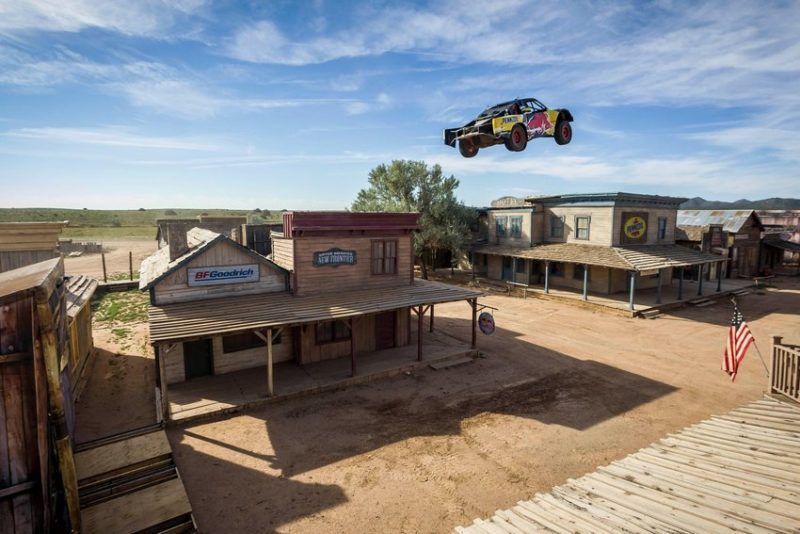 Yes, you read that right…a flying truck. By flying, we mean a truck that launches from a ramp and into the Guinness Book of World Records. Bryce Menzies teamed up with Red Bull and Pennzoil to bring the world this badass Pro2 truck.

After flying over a ghost town in the Nevada desert, Menzies said, ”We broke a world record, which is incredible; we went 379 feet flying a truck. This has been my dream and to see it come to life was surreal — it was one of the greatest moments of my life. I’m so glad I did it. I came away with a broken shoulder, that’s not bad at all, and I’m just glad I’m in the record books.” You can watch the video here. 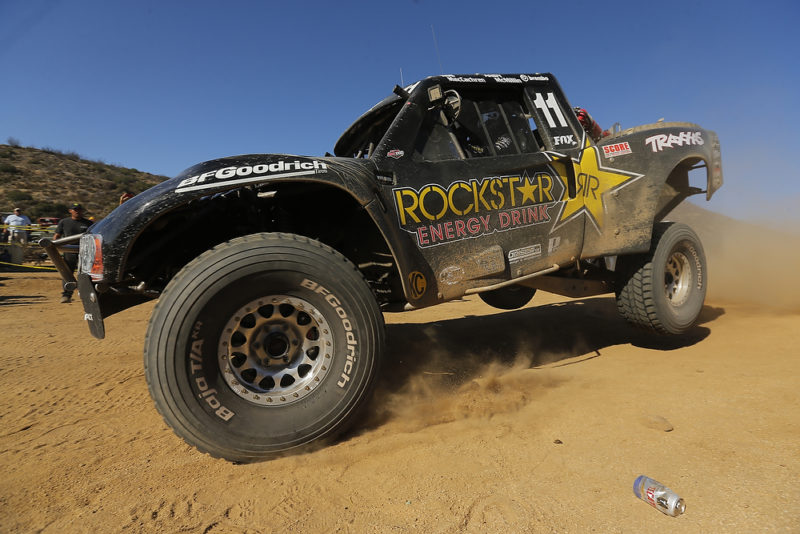 Rob MacCachren’s truck racing career is legendary With various trucks, he has won more than 200 off-road races, including four titles at the Baja 1000 and multiple titles in the the Lucas Oil Off Road Racing Series (LOORRS).

The picture above was taken as his truck and he were on the verge of their latest Baja 1000 win. 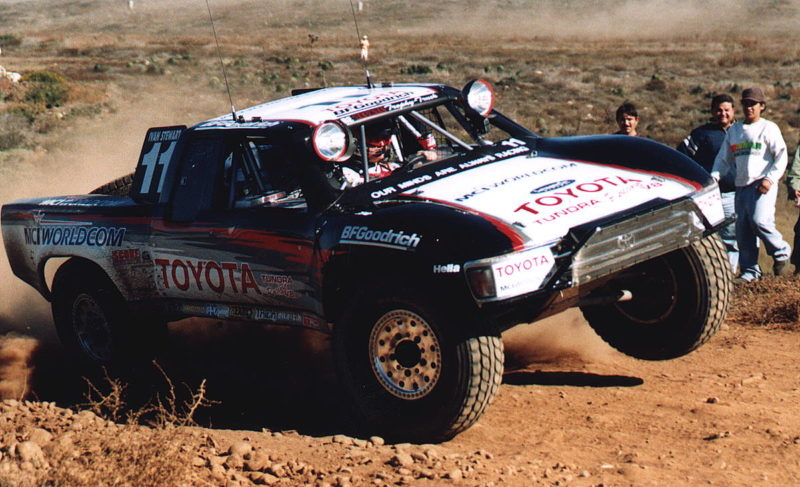 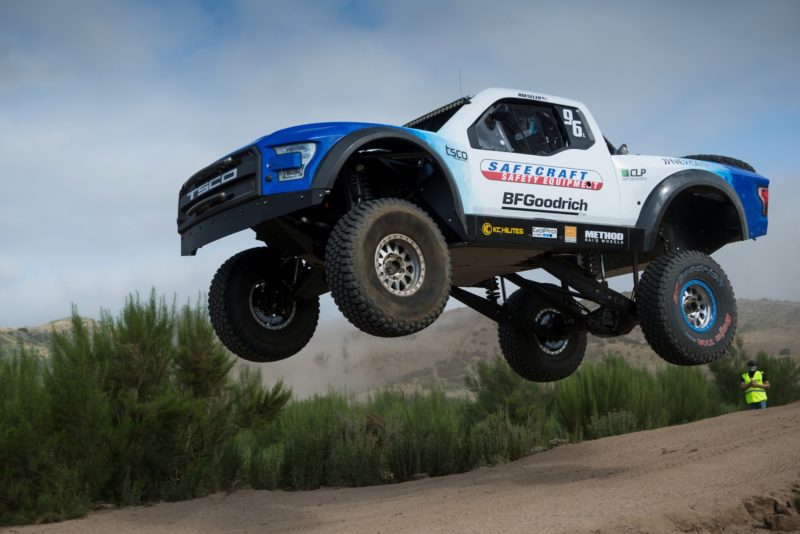 Bryce Menzies may hold the world record for the longest jump in a truck, but he did it on a closed track with a jump team of specialists. Larry Roeseler set a jump record during an on-track Big Air competition.

On top of his 10 Baja 1000 overall wins, 12 overall wins of the Baja 500, 17 class wins at the Baja 500, and 10 gold medals in the International Six Days Enduro, Roeseler jumped his Safecraft truck 163 feet during a 2009 Big Air competition at the SCORE Desert Challenge. 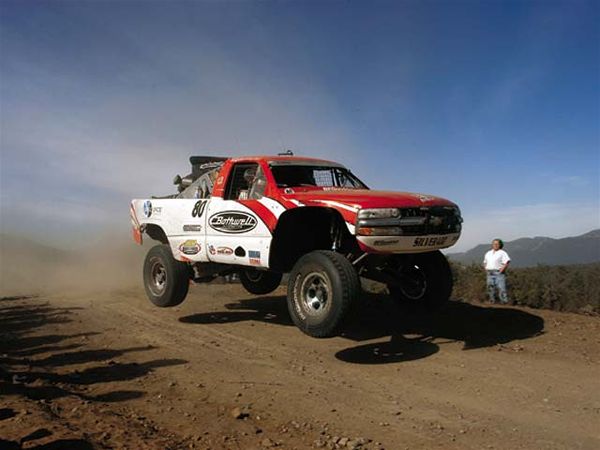 ”Lightening” Larry Ragland began racing motorcycles in the 1960s. His love of dirt competition led him to step off a motorcycle and into Class 1 unlimited off-road racing and, eventually, trophy class competition.

Over his career, Ragland won more than 40 races. His credits include overall victories at the Parker 400, the Baja 500, Mexicali 300, multiple SCORE Class 1 championships, and the Class 7 championship. After moving to Class 8, Ragland won numerous races. His Class 8 resume includes a total of 5 SCORE Baja 1000 wins, including three consecutive wins in 1995, 1996, and 1997. 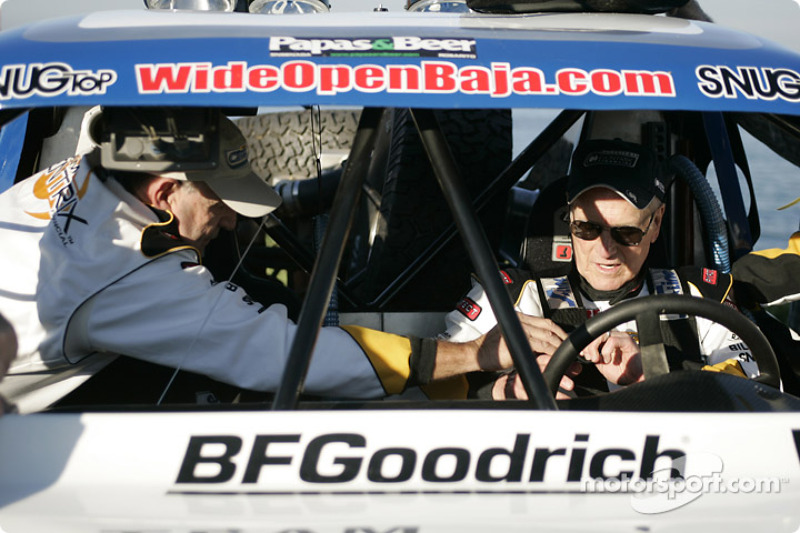 Paul Newman was a well known actor, but his racing chops are mostly part of the knowledge base of true racing fans. Newman raced motorcycles before becoming a Hollywood stuntman. Acting came after those careers, but he never stopped racing. His last race was the 2004 SCORE Baja 1000. While he rarely piloted a truck, he is listed here today as a tribute to the racing legacy he left behind. 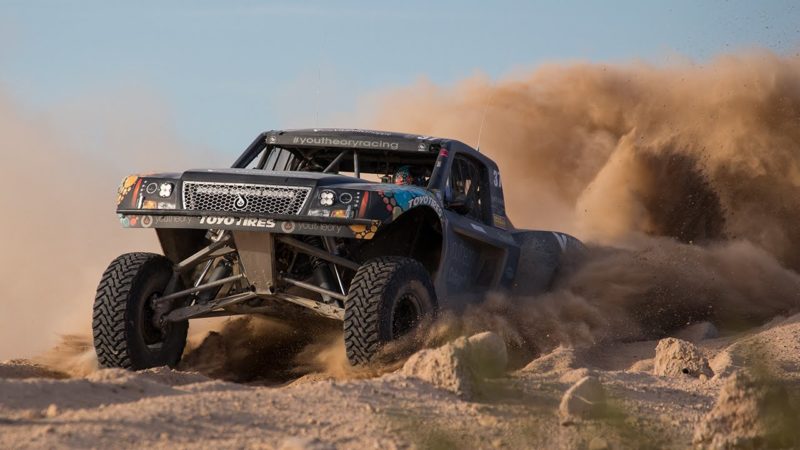 Jerry Whelchel began racing Class 1 at age 14. He jumped to the Mickey Thompson series in 1984, where he won 4 series championships and holds the record for most main event wins. He also drove a Mark Post-sponsored car to wins in the Laughlin Challenge and San Felipe 250. After making the switch to trucks, Jerry won multiple races. He enjoyed trips to 7 podiums and the Pro2WD championship. He also won the BITD Trick Truck class in 2008. Jerry made the move to Chet Huffman Motorsports in 2008, continuing his winning ways. In total, Jerry Welchel has won 250 off-road races. 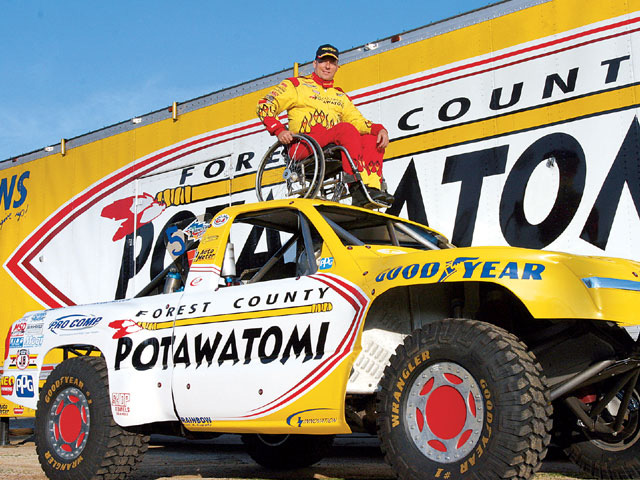 Evan Evans is the son of Off-road Motorsports Hall of Fame driver ”The Legend” Walker Evans. Before his racing career could take off, he was involved in a motorcycle accident that left him a paraplegic. Instead of letting the accident destroy his career, Evans built a hand-controlled truck.

He has won seven class victories and won the 1996 Class 13 Championship title in the SODA series. After SODA became CORR, Evans moved up to a trophy model. He has 30 truck wins under his belt and continues to race occasionally. 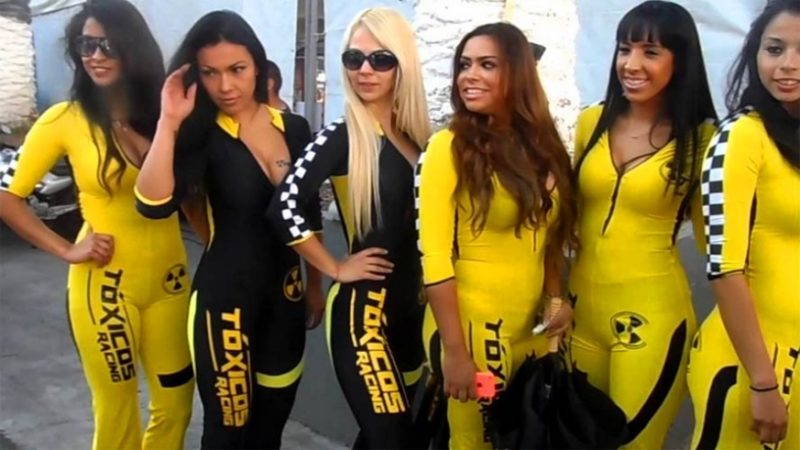 No race series is complete without some outstandingly sexy sponsorship girls. The Trophy series features some of the most beautiful women in racing. So here you go, the best eye candy around.

Which Driver Comes Out On Top? 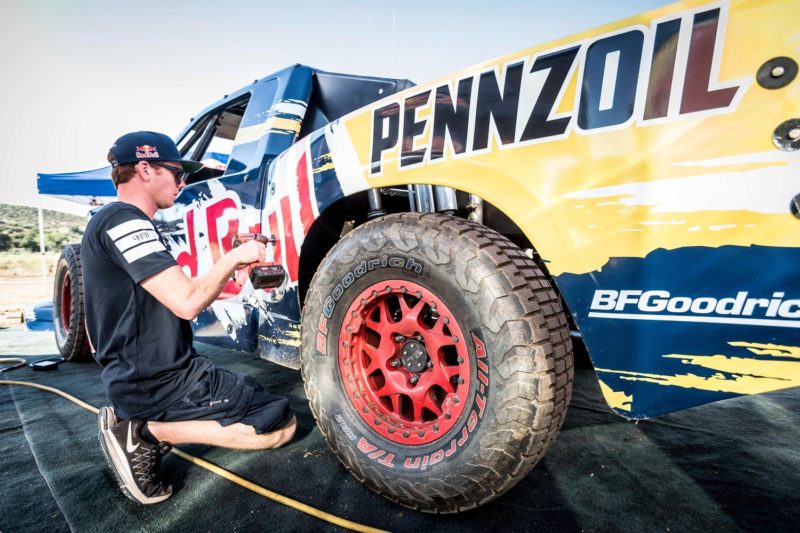 Well, it’s decision time. Truth be told, the choice has changed a few times as this article has been written. We like the heart and grit of Paul Newman and Evan Evans, but this list is more about badass trophy trucks than it is about drivers, so we are going to go with Bryce Menzies flying truck run. How do you build a truck that is light and fast enough to launch itself 379 ft? We can’t tell you and Menzies race team is tight lipped, but this is definitely one badass (not at all street legal) truck.