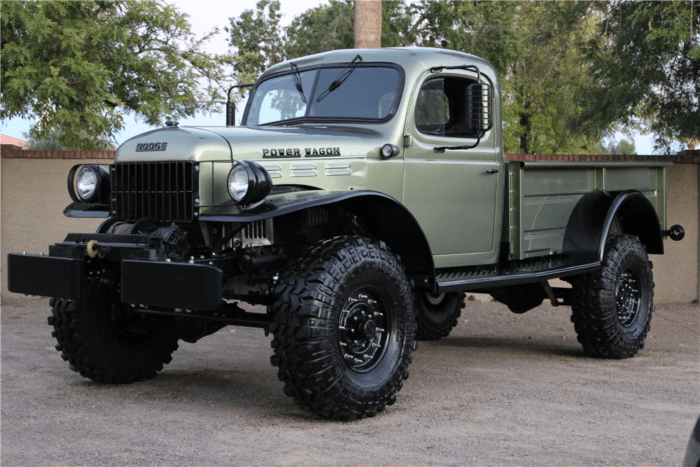 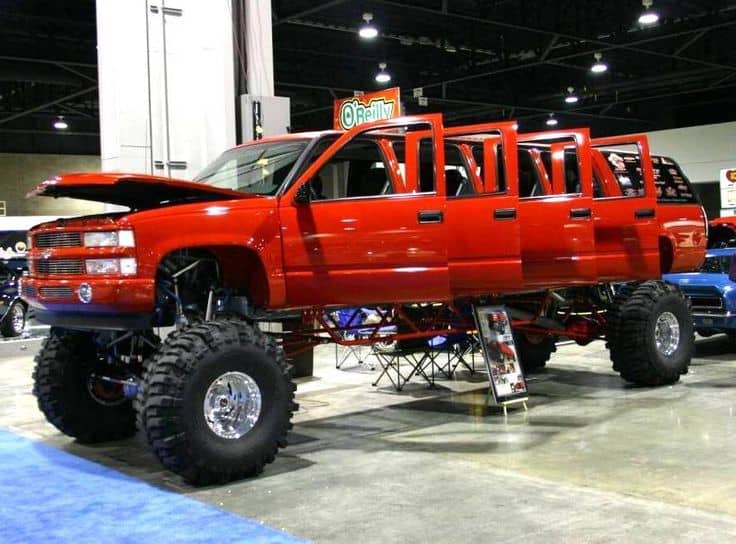 What is it about jacked up trucks that attracts everyone’s attention. Even if your reaction is WTF, you check a jacked up truck out as you pass by. For those of us who know what goes into building lifted trucks, it may be a curiosity as to how the owner put the lift in. For the laymen it could be a question as to why. For everyone we know, it usually a question as to what kind of shit is about to get torn up. Are they smashing cars, tearing up the sand, or kicking up a nice rooster tail of mud? After all, that is what jacked up trucks are for, right?

Well, the reason you turn your head when a jacked up truck goes by doesn’t matter here. What matters is that we decided to put together a list of some of the greatest jacked up trucks we have ever seen. So, without further introduction, here we go. 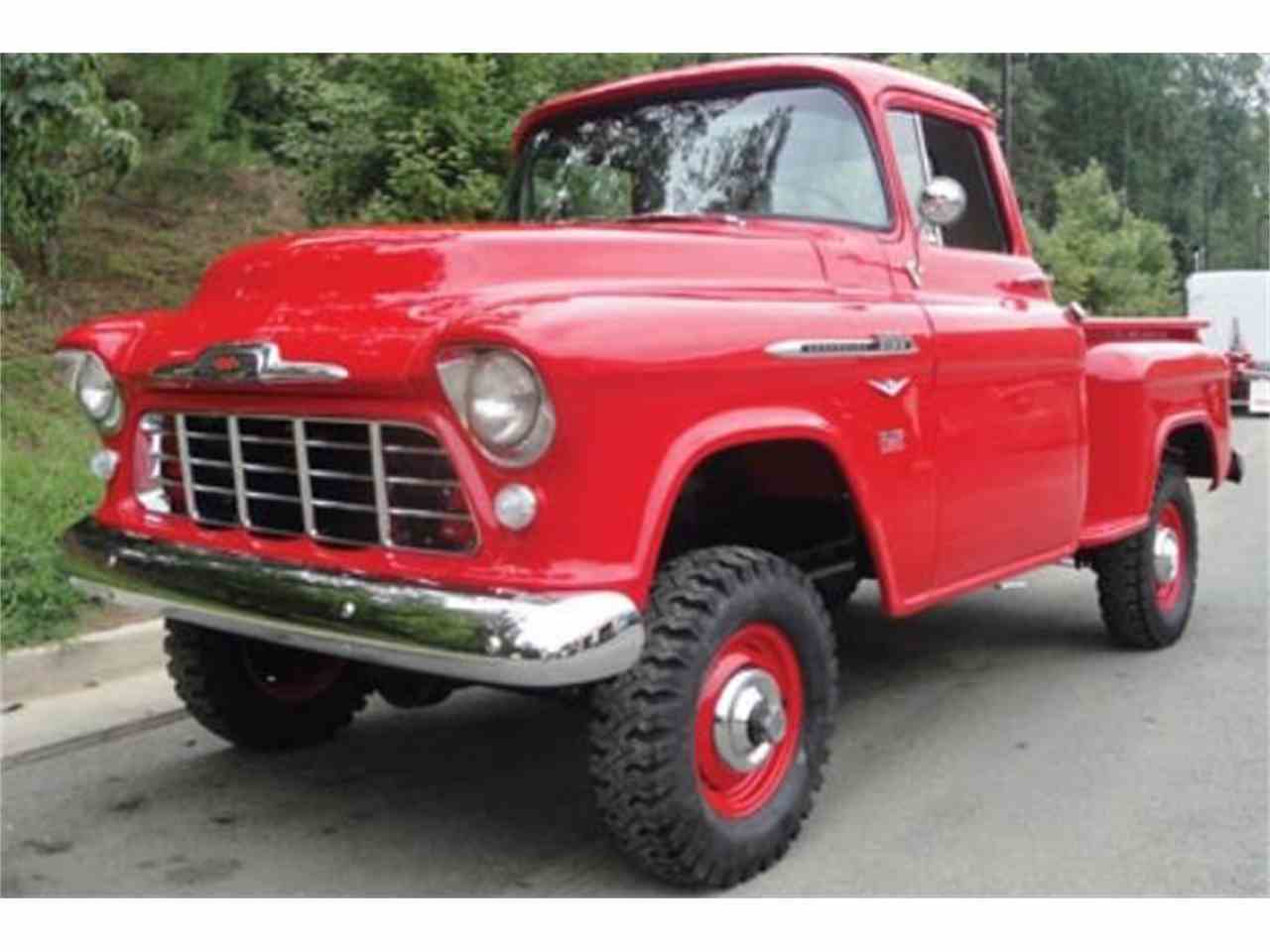 There is something that attracts many customizers to the Chevy 3100. People who build lifted Chevy trucks use the 3100 more than any other version of the Chevy pickup. This splendid 1956 Chevy 3100 features a mild 3 ” lift, a small block Chevy 350 engine, and a three-speed manual transmission. It is topped off with a great Chevrolet Flame Red paint job. This truck may well be equipped with the perfect combo for a jacked up truck that is to be used as a daily driver. 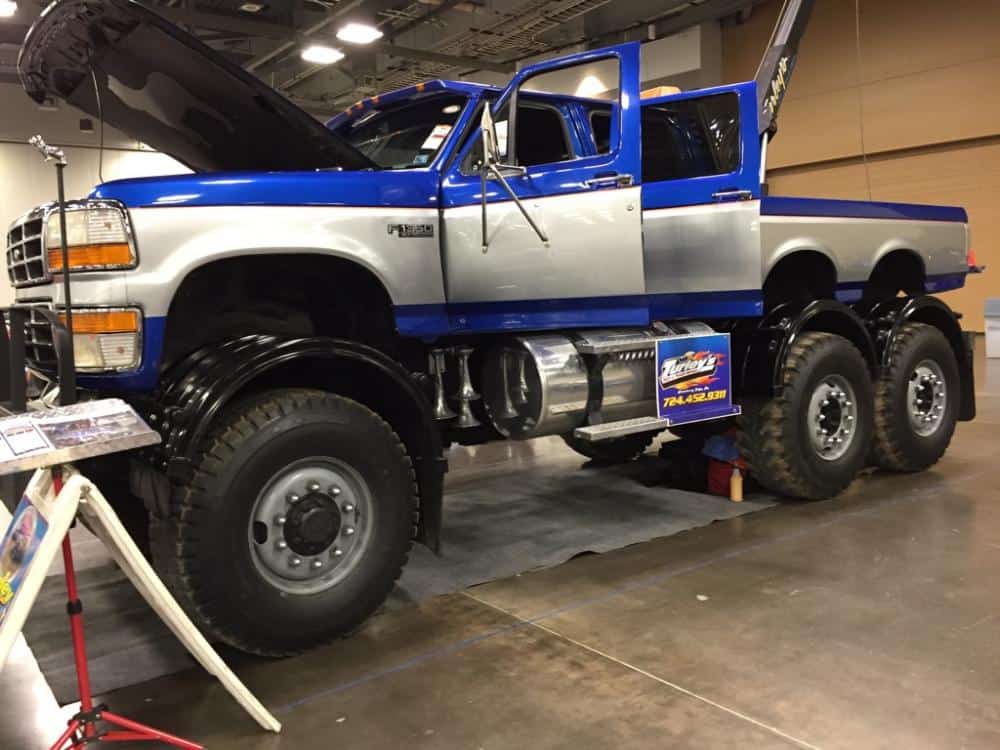 What do you do when you want more from your Ford? If you are Jim Turley, you build one of the most jacked up trucks around. To wit, you take a Ford body and stretch it over a 6×6 Mack military chassis. Turley didn’t change anything under the hood. The Mutt is still powered by the 6.7L Cummins it came with. He just created a truck to turn heads where ever he goes. 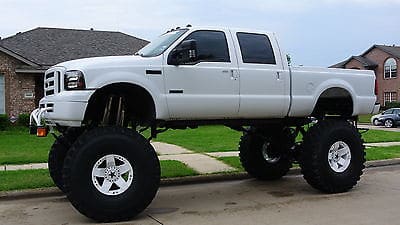 From the factory, a 2006 Ford F-350 is mildly lifted by its super duty suspension parts. That wasn’t quite enough for this Ford owner. Neither was a six or nine inch lift. Instead, he lifted his 2006 Ford F-350 higher than most jacked up trucks ever aspire to go, he went with a 39” lift and plopped it down on 54 inch tires to round out the look. Even better, it is street legal in many states. If that doesn’t make you say WTF when it rolls by, nothing will. 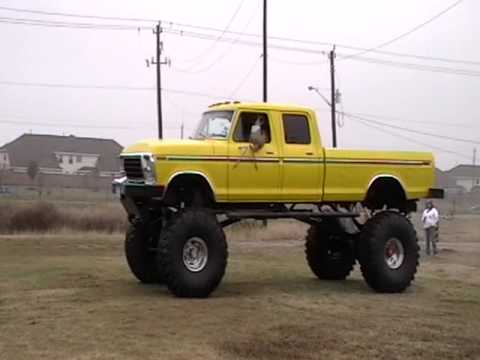 Ford pickups from the 1970s are a common base for jacked up trucks. This owner took his 1978 F-250 and lifted it a pleasant 26 inches and added a set of 36 inch swampers. The bright yellow paint is a helluva topper for an outstanding truck. 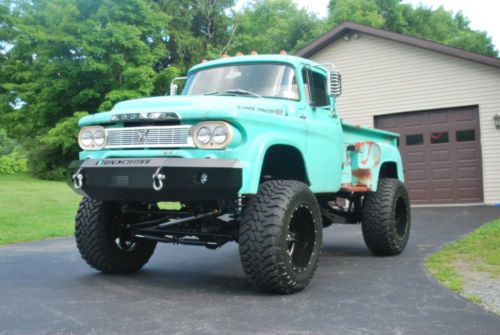 The Dodge Power Wagon was first built for use during WWII. The units built for military use were not jacked up trucks per se, but were sturdy 1 ton trucks that could tackle any terrain. By 1960, the Power Wagon nameplate was being applied to ½ ton trucks as a trim option. This awesome rat rod 1960 Power Wagon has been lifted nine inches and runs on 36 inch rubber to round out its look. 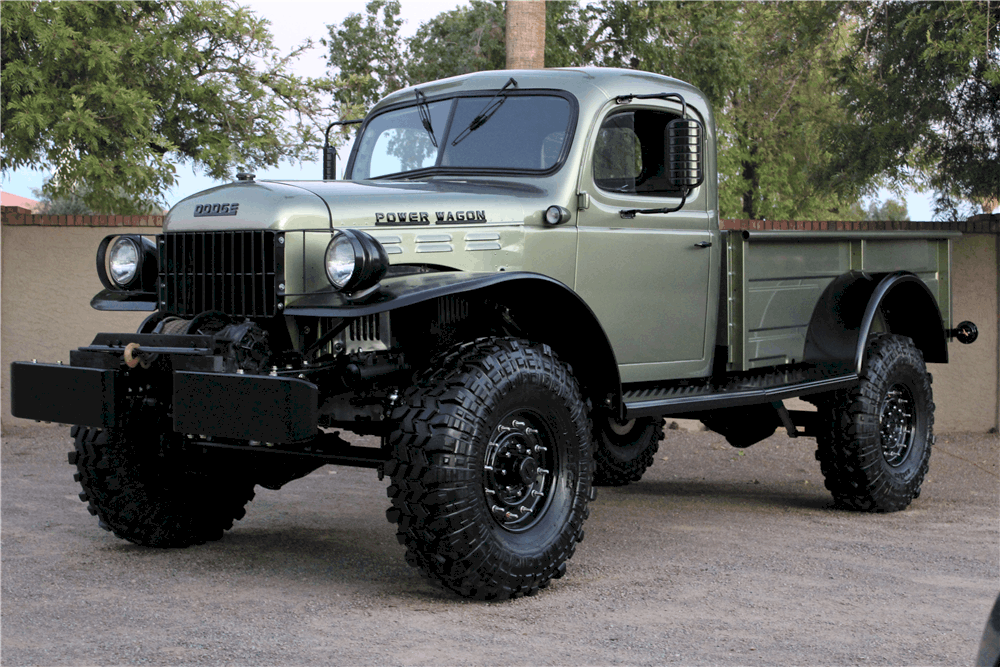 This 1958 Dodge went for over $110,000 at a recent Barret-Jackson auction. It has been lifted a mild 3 inches over its original stance. While a three inch lift is not very impressive, everything else the truck has to offer is. Power comes from a 480 hp Chevy LS3 paired to a 4L70E GM performance transmission. A rebuilt NP241-C transfer case drives 4:56 gear military axles. The truck sports a Dana 60 front and a Corporate 14-bolt rear. There is a Braden MU-2 winch out front to help pull your less fortunate friends out of the muck and mire.

The fellas over at Rev Northwest offer many jacked up trucks for sale. One that caught our eye was this 1970 International Scout. The Silver Bullet nickname comes from the satin metallic gray paint that gives it a brushed aluminum look. Power comes from an IH 304 V8 paired to an original four-speed manual gearbox. The builder added custom steel bumpers, an updated grille, and a dimple roll cage.
The mild lift is accentuated with 35 inch BFG KM2 MT tires wrapped around 15 inch steel rims. 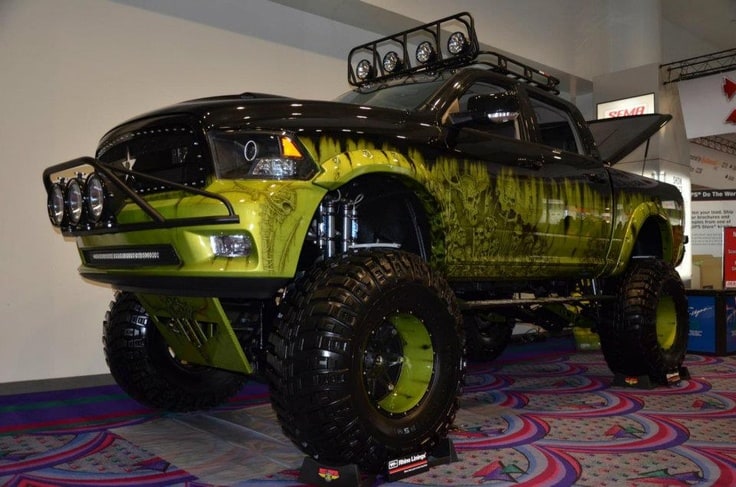 Some jacked up trucks refuse to be defined. The only way to describe this lifted Dodge is controlled madness. The drivetrain is all original, but that is about the only original part of the truck. The paint job is a three man collaboration. The lift is beautifully done and the 35 inchers sit on some of the tightest custom wheels we have seen in quite a while. 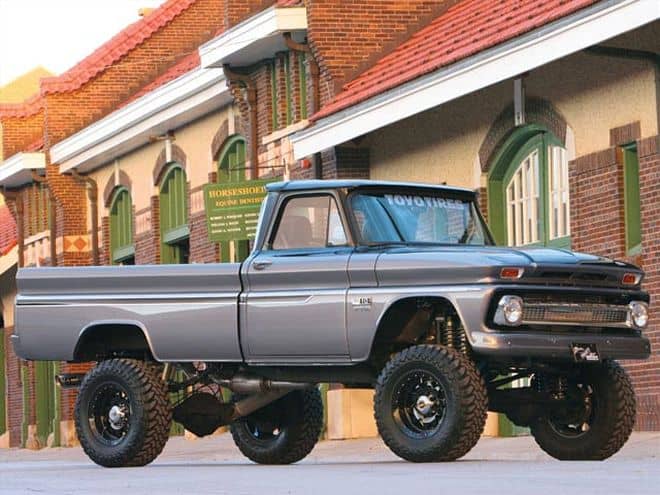 You may recognize Matt Hughes as a nine-time UFC champion. What you may not know is that he is a huge fan of jacked up trucks. He has a specific interest in the Chevy C10s built between 1960 and 1966, especially the rare four-wheel drive units. After running into the fellas from 2 Brothers Custom Trucks at a SEMA show, the journey toward one of the more badass lifted Chevy trucks around began.

First up was powering the ’66. Instead of looking for an era powerplant. 2 Brothers opted to put the entire 6.6L diesel drivetrain from a 2006 Chevy 2500HD Crew Cab 4×4 under the truck. As you can imagine, a lot of fabrication ensued. To keep things sharp, 2 Brothers converted the front to a solid axle using an Off-Road Direct conversion and a custom Ford Dana 60 axle. Outback are 5-inch Atlas leaf springs, a 4-inch Pro Comp lift block, and Pro Comp MX6 reservoir shocks. The whole thing sits on 18-inch RBP wheels that are wrapped in 35-inch Toyo Open Country M/T tires, giving the C10 the perfect look. 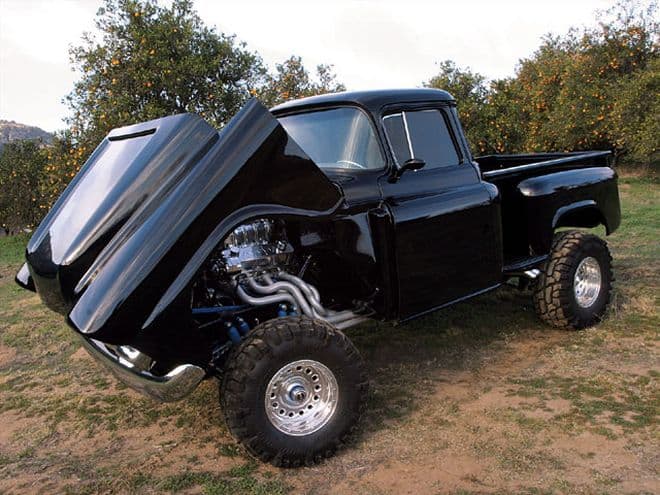 In general, lifted Chevy trucks are newer models. It is rare to find a Chevy Apache that has not been turned into a hotrod. So, when you see a 1958 Apache sitting on a nine inch lift, you have to stop and check it out. Dixie Brown worked with Street Rod Factory to bring this unusual truck to bear.

The lift isn’t the only unusual feature of this ’58. To begin with, the hood, headlights, grille, and fenders move as one piece and tilt forward to open the engine compartment. The lift is facilitated by a Ford 9-inch Posi rear with 3.70:1 gears, a GM front end, Air Ride airbags, ladder bars, new sway bars, and shocks. GM spindles hold the 16-inch wheels that sit in Interco TSL Thornbird 35 x 12.50 16LT tires. Power to the wheels comes from a 1969 Chevy 427 equipped with a BDS supercharger, MSD ignition, and a Holley fuel injection system. We imagine it took MegoBux to build this lifted truck. 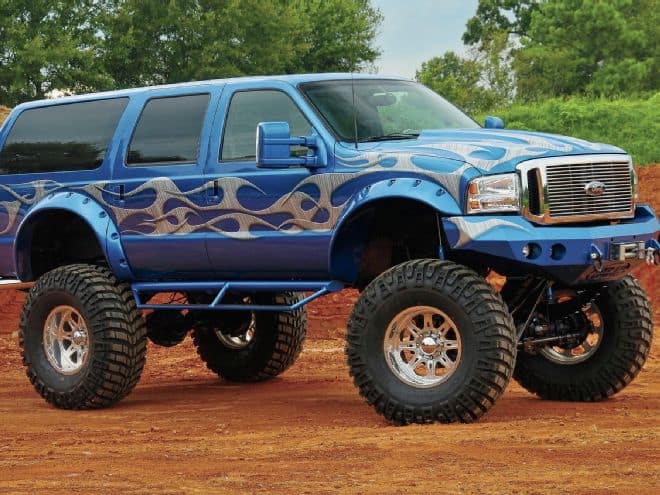 Jacked up trucks are not always trucks in the traditional sense. In this case, Matt Miller used a 2002 Ford Excursion as the base for an interesting lifted truck. First things first, Miller replaced the fenders and swapped the front cowl out for one off a 2007 Ford. After mounting a set of 20 x 14 Weld Racing wheels with 19.5/46 20LT Mickey Thompson Baja Claws, Miller noticed he needed to extend the fenders. To mix things up, he added a Road Armor front bumper with a 12,000 lb winch and used a Fab Fours front bumper with an 8,000 lb winch in the rear. Miller solidified the 18 inch lift with Carrier springs and BDS shocks. 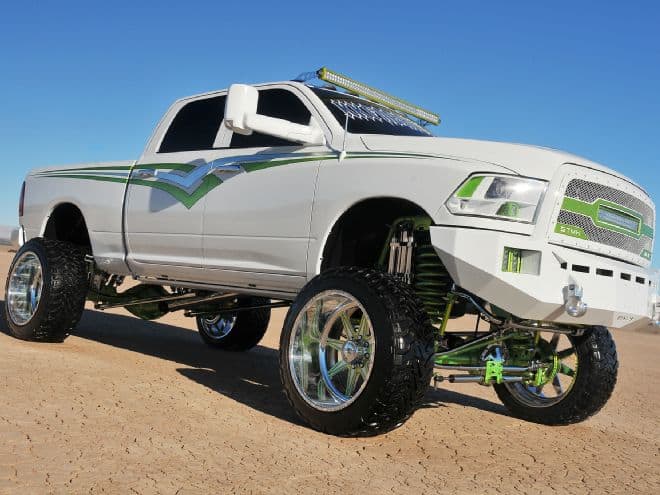 Marshawn Lynch may have made Beast Mode a common saying among football fans, but Joey Rodriguez made it popular among fans of jacked up trucks.

When Rodriguez bought his 2012 Dodge Ram, he wasn’t sure if he wanted to build a racing truck or blow away the lifted trucks set. Building a lifted truck won out. With help from Krazy Kustomz, he added a towering 10-inch lift. Among the lifted trucks set, 10 inches is tiny, so how do you blow them away? You go to work under the hood. Dodge packed a nice 6.7L Cummins diesel under the hood in 2012. After spending some time swapping parts out, Rodriguez managed to dyno a touch over 1,000 hp from his. Apparently, he combined his racing truck/jacked up truck quandary in the end.

13. The Best Example of WTF Jacked Up Trucks 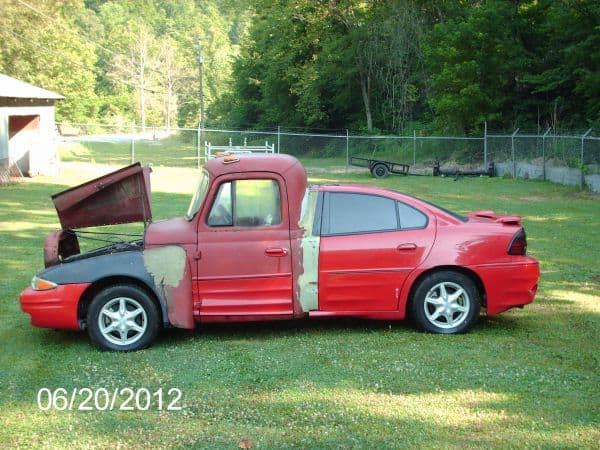 We couldn’t wrap up our list without showing you a vehicle that causes you to wonder if you have seen one of the most WTF jacked up trucks in existence. Looking at this monstrosity, all we can think is that someone was bored and the whole vehicle started out with the words, ”Here, hold my beer.” Seriously, who thinks its a good idea to combine an International Harvester and a Pontiac Grand Am? To make matters worse, it looks like the whole thing is held together with J.B.Weld.