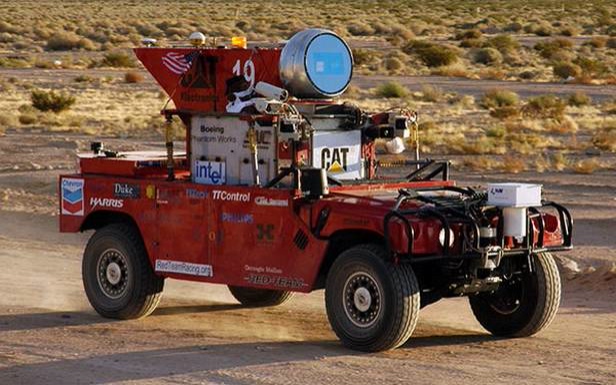 Let’s be real, none of these auto facts are going to make you a millionaire or get you a college degree. However, they could help you win a bar argument or game of trivia. We made a list of 20 random facts in no particular order. From facts you probably didn’t know about the average car to fun car facts, world record stats, new car and auto show firsts, to top speed attempts, and more.

1. The most stolen car in the United States is the Honda Accord. 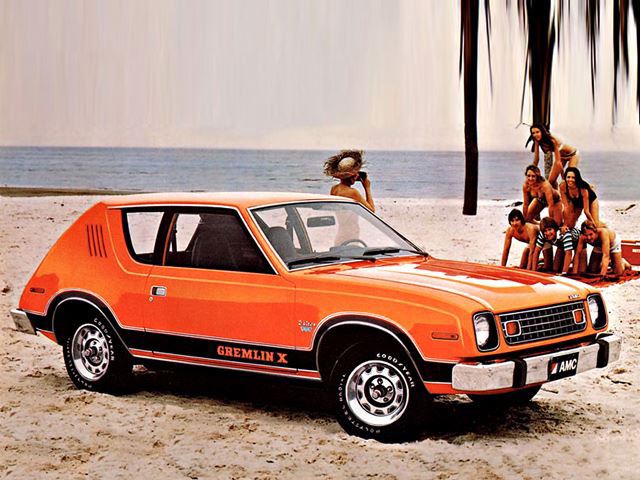 3. In the past 50 years, motor vehicle fatalities in the USA have reduced by roughly 80%. The total number of fatalities for 2010 alone is the lowest in 62 years. As car accident stats go, that’s incredible.

4. Whale oil was actually used in some car transmissions until 1973. 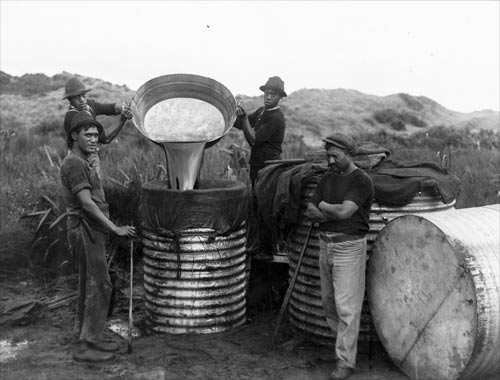 5. From 1908-1914, Ford’s Model T could be purchased in several different colors, but not black. In an effort to make production cheaper and more efficient, Ford chose to make all further Model T’s only in the color black (since black paint was cheap and durable). Today, cars are produced in all kinds of colors, but the old Henry Ford quote about black cars is still told over and over again.

6. The 1970 Oldsmobile 442 was capable of doing zero to 60 in less than six seconds. This speed was pretty impressive for the 70’s, especially for an Oldsmobile. 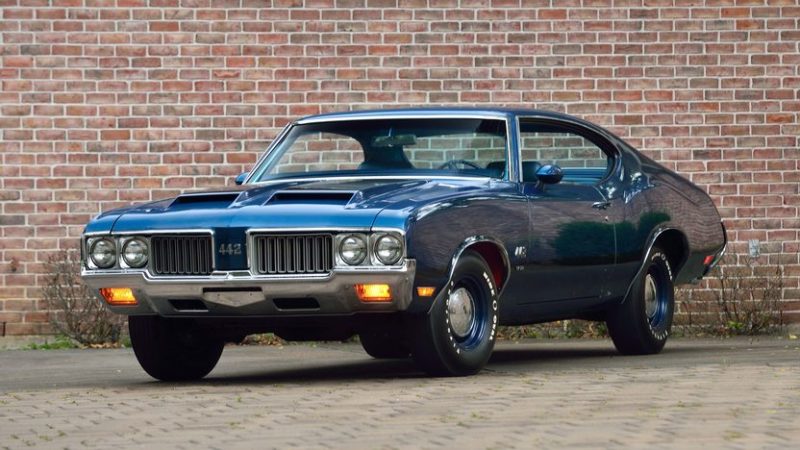 7. There are now three states that have legalized self-driving cars on the road: Nevada, Florida, and California. Nevada was the first to issue licenses, and did so to allow Google to test their self-driving cars on public streets. Article originally written in 2012, as of 2016 Utah, North Dakota, Arkansas, Louisiana, Tennessee, Philadelphia, Vermont, and Washington DC have been added to the list. There was an executive order for Arizona and Massachusetts. Colorado, New York, and Alabama are also in progress. Michigan was the only to allow it without a driver in the car and passing this was in progress in California.

8. The 1946 Cisitalia 202 GT is such a beautiful car that it is permanently exhibited in the New York Museum of Modern Art. The car sports has no sharp edges and is all one single sheet of aluminum. The car was only made from 1947 to 1952 and only 170 were ever produced. 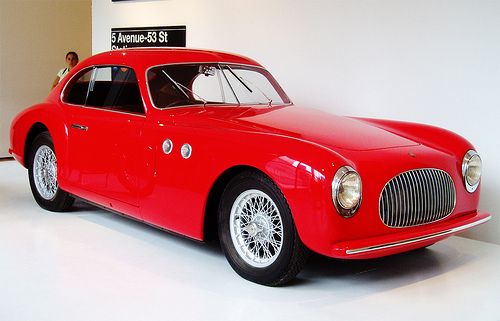 9. Electric cars are not a new thing; they were already being manufactured in 1905. Rauch & Lang produced electric cars until 1920, when the gas-combustion engine became cheaper to run because of low gas prices. 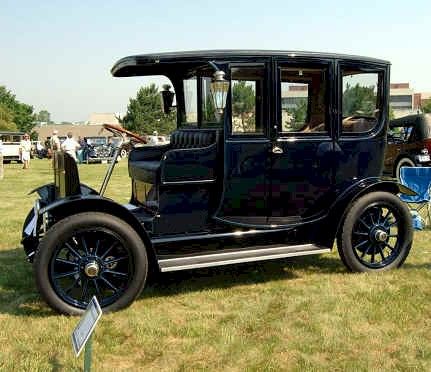 10. The Volkswagen Beetle was originally called “Kraft durch Freude Wage” (“Strength Through Joy Car”). The small car was named thusly by Hitler, who in May of 1938 visited the factory and made his great announcement. The car was named after an organization within the Third Reich. After World War II, Volkswagen chose to change the name.

11. Last year there were 32,310 American fatalities due to auto accidents. This is the lowest fatality rate in over half a century. Seat belts are now being worn by 84% of people who travel in vehicles, compared to 14% just 30 years ago. Other improvements like air bags, stability control, crash impact standards, anti-lock brakes, and better tires also contribute to this great reduction.

12. Quite a few high-end cars are already using technology to be more autonomous. Some features include: automatic braking that activates when sensors identify a crash is about to happen, self-adjusting cruise control to keep you from following another car too closely, anti-drifting steering, and self-parking. This is another one that is since a bit outdated, I won’t even try and update as the subject has changed greatly since we originally wrote this in 2012.

13. Mr. H.H. Bliss, a real estate man from New York, was the first victim of vehicular manslaughter in the United States. In September of 1899, he exited a trolley car and was hit by an electric taxicab. Though he was not killed instantly, he did not survive the injuries to his head and chest.

14. In 2004, Nevada was host to the first ever DARPA Grand Challenge. This is a competition for driverless cars, and the first year none of the participants completed the course. Since then, Google’s self-driving cars have completed over 140,000 miles of road travel, with only two small incidents; one of them caused by human error.

15. Using the actual formula for horsepower (1 HP = power needed to lift 550 lbs. 1 ft. in 1 sec.), the average horse, over a longer period of time, will only produce around .7HP. Currently, a typical compact car will contain a 150HP engine; or the horsepower contained in around 214 horses.

16. The average family sedan has contact patches (areas on the tires that are always touching the road) only covering around 100 square inches of road. This means all four tires only touch around as much road as your two feet placed next to each other.

17. It is believed that self-driving cars will not only be able to improve the flow of traffic on highways (by way of sensing distances between cars and adjusting accordingly), but with the ability to park themselves, it will also strike out parking hassles. This will lead to fewer accidents, and reduced need for traffic control. This is the third one that is highly outdated due to the article being written in 2012, I’ll remove and replace these 3.

18. The Transition, also known as The Flying Car, is actually a plane that can be safely driven on a road or highway, not a car that can fly. The first successful test flight was in 2009 and the Next Generation was unveiled in 2010. 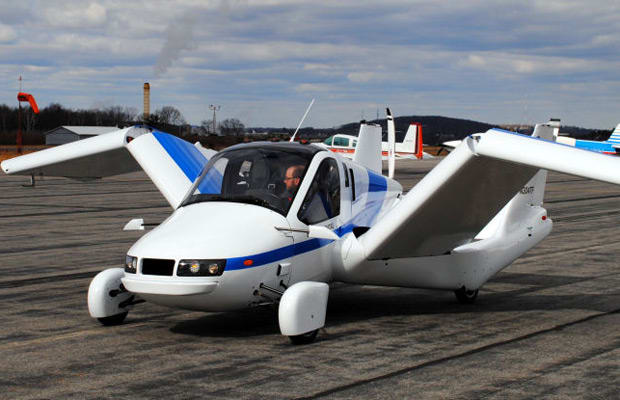 19. A researcher at Carnegie Mellon has developed new headlight technology that dodges raindrops, to avoid shining light on them. The flicker is too fast to be seen by the human eye, and it is estimated that the lights will make driving in rain significantly less dangerous. BMW has also developed “Dynamic Light Spot”, which finds nearby pedestrians and highlights them. 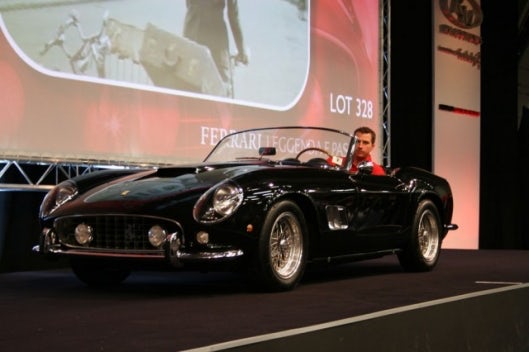 That was our fun list of automobile facts. Some could be useful, some might be fun bar convo. Feel free to add any interesting car facts you may have in the comments. Or how about trying your luck at answering some of these tougher questions below!

Test Your Friends Knowledge With This Car Trivia!

So now you’ve learned a few cool car facts, what you really need are some serious questions that you can test your buddies knowledge with. Who doesn’t love trivia? And if you love cars, you probably love car trivia. Assembled here are a series of questions that you can try on your friends, starting with some basic car facts most auto fanatics know, together we’ll work our way into some real esoteric facts and intimidating questions that are sure to dazzle.

We’d love to hear your feedback on these questions, as if you enjoy them we post additional trivia questions in the future. It’s up to you.

1. Did Henry Ford invent the car? Invent the assembly line? 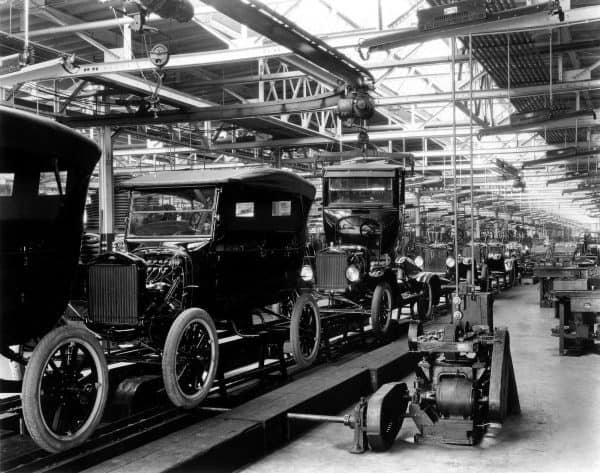 Karl Benz is generally regarded as the inventor of the modern automobile, having been granted a patent  in 1886, and Ransom E. Olds (of Oldsmobile and REO Speedwagon fame) is credited with inventing the automotive assembly line, though Ford did improve the process by adding a moving conveyor. Though barely able to read, Ford understood the value of good PR and used it to its fullest.

2. Who designed the original Volkswagen? 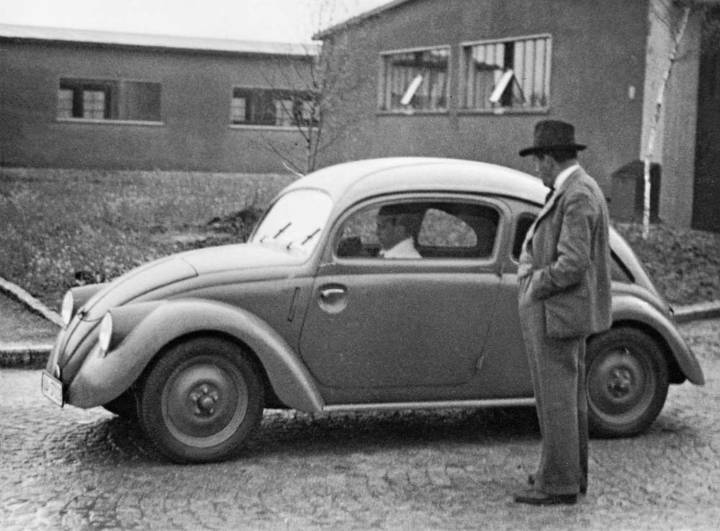 Ferdinand Porsche, founder of the company that bears his name, designed the Volkswagen. The intent was to copy the success of the Model T in that it provided an inexpensive car that almost any German family could afford. Several other manufacturers were working on the same concept, but Porsche’s was unique with its four wheel independent suspension, rear mounted, air cooled engine, and aerodynamic shape and was selected for production.

3. Which is more efficient, turbochrager or a supercharger? 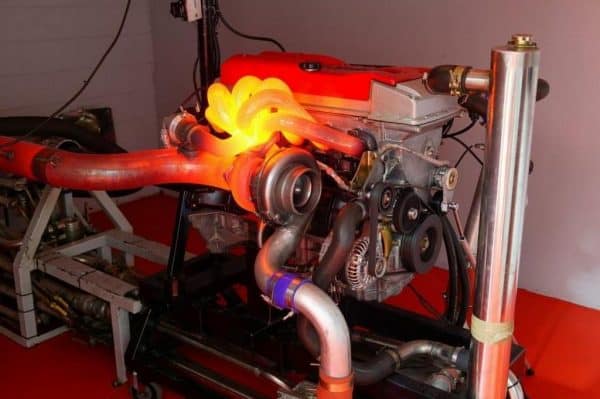 As the energy of the turbocharger is derived from the flow of exhaust gases leaving the engine, it draws very little power from the engine itself. A supercharger, typically driven by a belt (like an alternator) does consume power from the engine. The supercharger’s advantages, though, are more immediate throttle response, increased power across a broader rpm range, and lower under-hood temperatures.

4. Who designed the Small Block Chevy and when was it first available to the public? 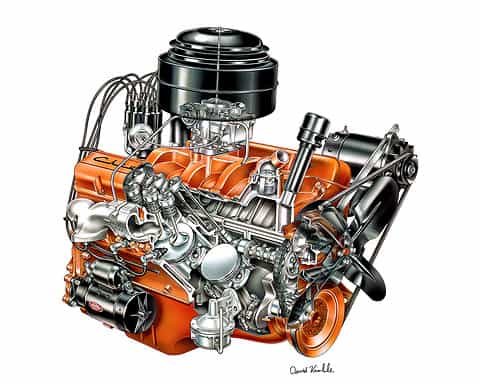 According to the General Motors website “Ed Cole is the spiritual and virtual father of GM’s small-block engine family.” He was Chevrolet’s chief engineer at the time of its creation in the early 1950s, having just moved over from Cadillac. Work was already underway on a similar V-8 at Chevrolet when he arrived. It was a thoroughly conventional, small-displacement engine design – and Cole hated it at first sight. He instructed his engineers to start over and design an engine that was lightweight, compact and powerful. It was introduced to the public for the 1955 model year, and over 100 million small blocks have been manufactured since that time, no doubt fitted into a hundred million cars and more! 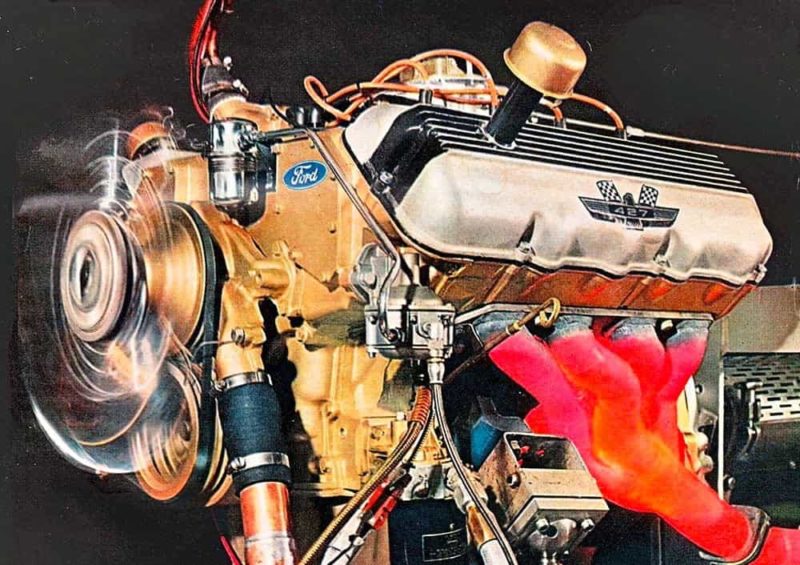 427 – A member of the FE (Ford/Edsel) family of engines, the 427 was developed primarily for racing. The stroke was the same as the 390 at 3.78 inches, but the bore was increased to 4.23 inches. The block was cast with an especially thickened deck to withstand higher compression. Many 427s were built with a steel crankshaft and cross-drilled main bearings. Most 427s used solid valve lifters with the exception of the 1968 block which was drilled for use with hydraulic lifters. It also served as the basis for the SOHC “cammer” engine.

428 – Also a member of the FE family, but with a 3.985 inch stroke and a 4.135 inches bore, creating an easier-to-make engine with nearly identical displacement (the bore of the 427 pushed the limits of the engine design). The 428 was perhaps best known installed in the 1968 Cobra Jet Mustang. 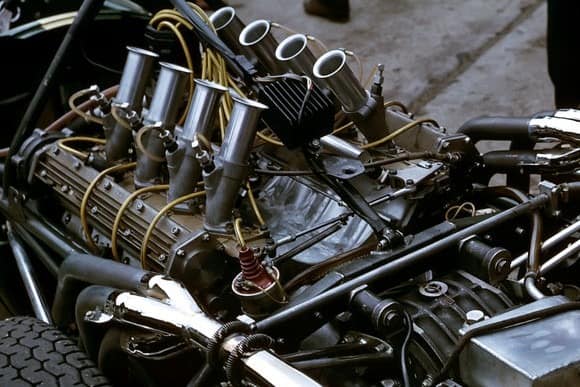 When the F1 rules changed maximum engine size to 3L in 1966, there weren’t many engine options for teams. Resourceful driver and team owner Jack Brabham bought some 3.5L aluminum Oldsmobile blocks and had the Australian Repco company develop SOHC cylinder heads for the motor. Brabham put his Repco/Olds to go use, winning both the Formula 1 Drivers’ and Constructors’ Championships in 1966.

In the photo above you can glimpse that valley that normally would have been covered by the intake valley ground down by hand to have weight.

7.How far does an IndyCar travel in the time it takes the driver to blink? 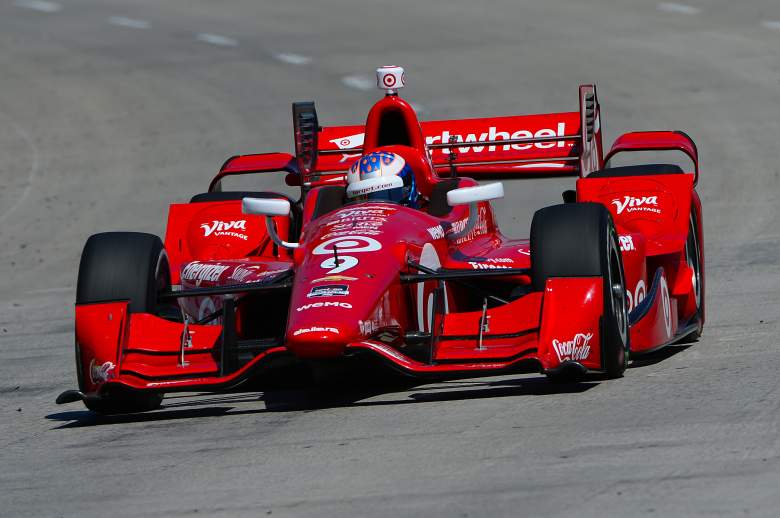 The race car would travel 133 feet while the driver blinked, a distance a little more than the height of a 12 story office building.

8. How Many Revolutions Does a Top Fuel Motor Make in a Run? 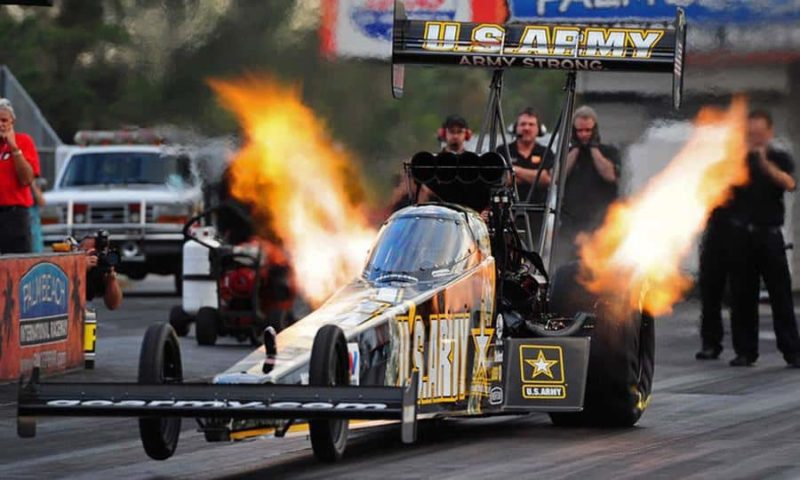 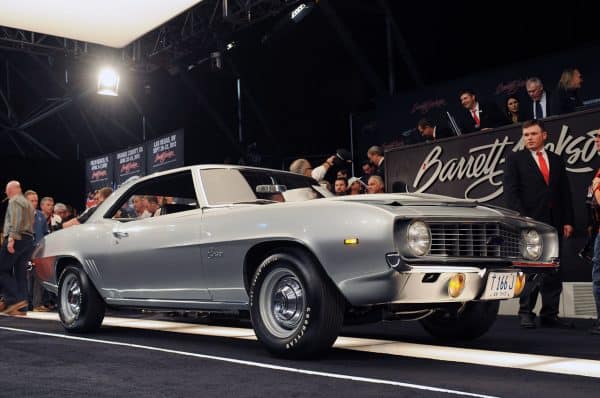 It would take about 6 minutes 9 seconds at wide open throttle, though the engine may stall before that for lack of sufficient air flow as the room empties of air.

10. There’s a lot of amperage in  a car’s electrical system, so how come it doesn’t kill people? 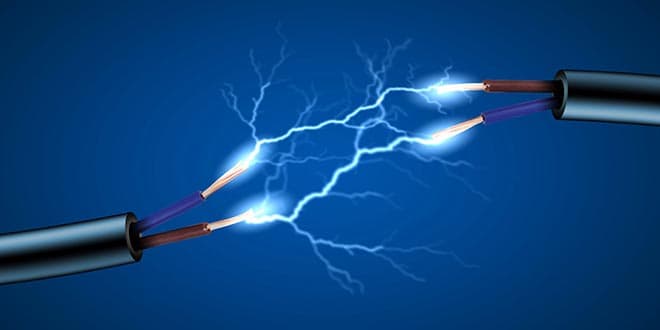 Although a car’s battery has enough amperage (electrical power) to kill you, it doesn’t have enough voltage (electrical force) to push the electrons through your body to do the job. Your body is just not conductive enough to be fried by 12 volts. Lucky you.

11. How much force is exerted on the top of the piston of a NASCAR Cup engine during the power stroke at peak RPM? 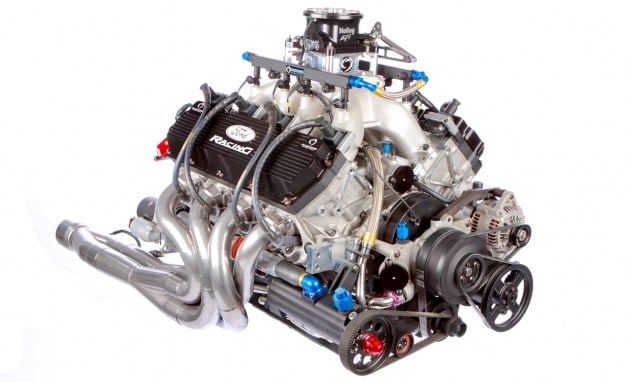 The force on the piston face in a NASCAR Sprint Cup motor is calculated at 3,151 lbs. (that’s for each power stroke for each piston for the length of the race). The car itself weighs 3,250 pounds.

At the end of the 2014 season NASCAR Sprint Cup engines reach a Brake Mean Effective Pressure (BMEP) of 227.5 PSI (the force of the explosion of the fuel/air mixture). The area of the top of a NASCAR piston is 13.85 square inches.