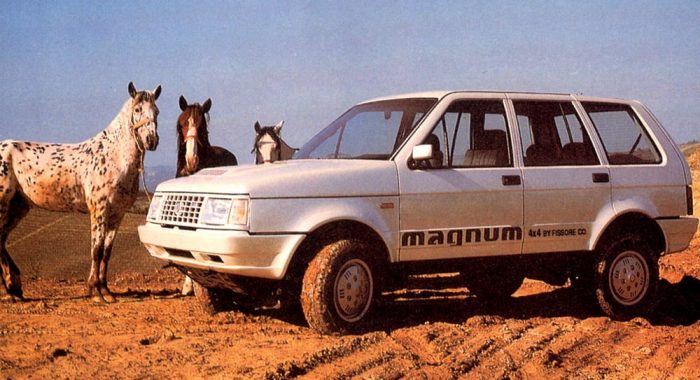 While you’re not going to see an Abrams tank in the carpool lane anytime soon, a number of vehicles originally intended for military use have, with varying degrees of success, crossed into “civvy street”. Here are 10 armed forces autos you really could commute in since they now have a non military vehicle version. 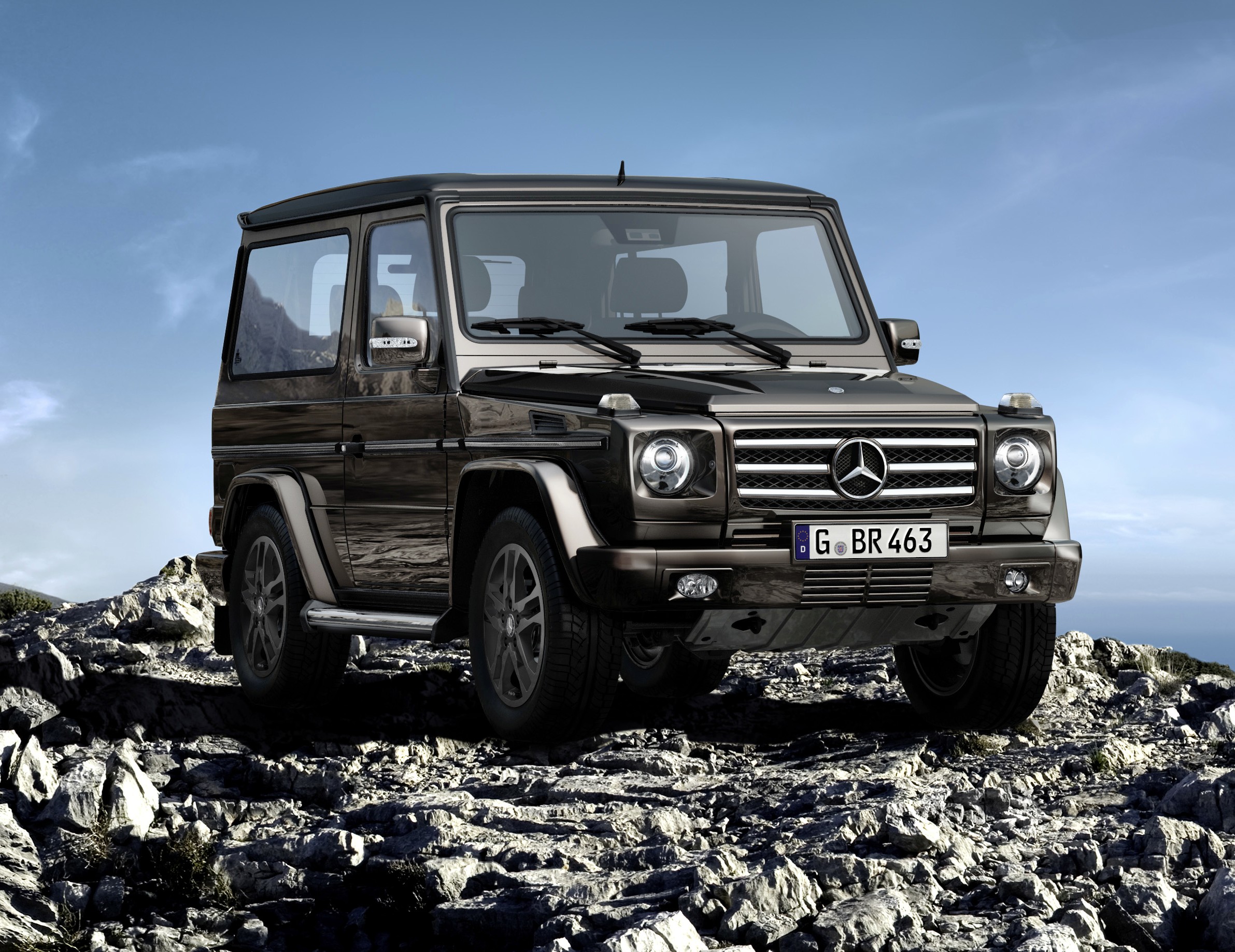 Beloved of A-list celebrities, Mercedes-Benz‘s boxy G-Class luxury SUV incongruously began life as a military vehicle. The brainchild of the Shah of Iran, then a major Mercedes shareholder, the “G-Wagen” was developed from the ground-up in the early 1970s, entering German army service as the Wolf and available in 2-door, soft-top and even 6×6 incarnations. While civilian versions have been sold in Europe since 1979, the G-Class didn’t arrive in America (other than a few über-pricey grey-market imports) until 2002. Prominent G-Class drivers, who often opt for $200K-plus AMG trims, have included Kim Kardashian, Floyd Mayweather, and Britney Spears. 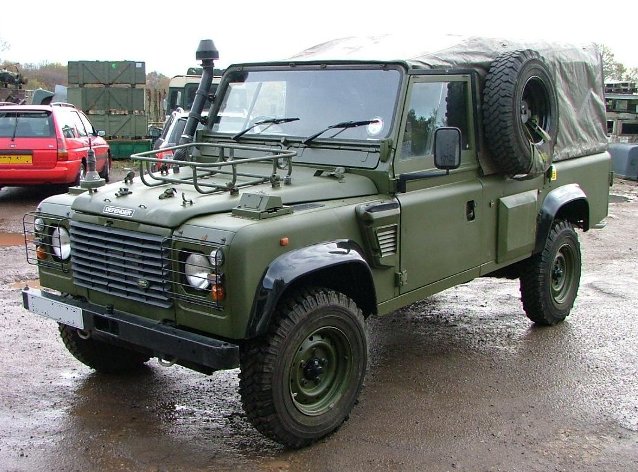 Land Rovers weren’t initially designed for military use, but rather as the 4×4 product line of Britain’s now-defunct Rover car company, starting in 1948 (Land Rover didn’t become its own company until 1978). But the originally Jeep-inspired, famously rugged ‘Drover was almost immediately adopted by the British Army and has since spawned an array of specialized military vehicles such as the 101 Forward Control and Land Rover Defender-based Wolf. While current consumer Land Rovers are far removed from the spartan, bone-shaking originals, so many surplus examples are in everyday use that there’s even an Ex-Military Land Rover Association.

Sold only briefly in the U.S. (1973-74) as the fun-loving Thing, the convertible Volkswagen Type 181 was first developed in the 1960s for the German Army. Closely related to World War II’s VW Beetle-based Kübelwagen light military vehicle, the Type 181 was marketed as the civilian Kurierwagen (in West Germany), Trekker (UK), Safari (Mexico/South America) and Pescaccia (Italy). Ironically, the strictly functional 181 has been embraced as a recreational vehicle, often brightly painted or customized into dune buggies. Also made in Mexico and Indonesia, the Thing’s kin were sold to both military and civilian customers until 1983. 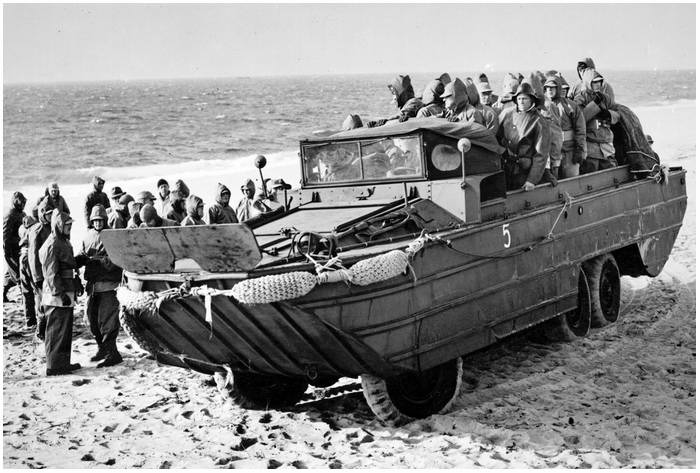 Hard to miss as former military transportation, the six-wheeled, open-topped and amphibious DUKW is now employed worldwide as a “Duck” tour vehicle. While most Ducks are lately filled with fun-seeking tourists, the DUKW’s original World War II purpose was deadly serious (and often literally deadly), as a beach landing vehicle for American and allied forces in bloody operations such as Guadalcanal and D-Day. Although constructed for just short combat lives, many DUKWs survived WWII to reappear in the Korean War; in civilian rescue, fire and police units; and as often garishly-colored tour buses in harbor and river destinations. 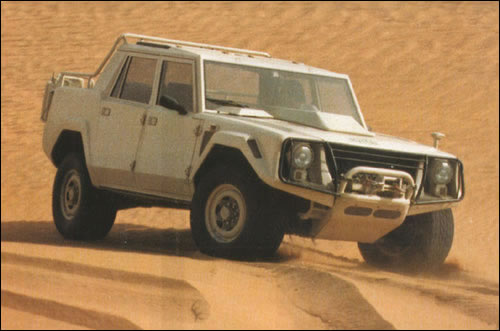 Italian supercar maker Lamborghini broke character to create an off-road, military-intended vehicle in 1977. The California-built, fiberglass Cheetah prototype was demonstrated to the U.S. military, but lost out to the Humvee. The Cheetah reappeared in 1986, albeit substantially re-designed, as the unmistakably Humvee-like LM002 ultra-luxury SUV. Although only 300 were made, the “Rambo Lambo” managed high-profile appearances in 2009 movie Fast & Furious and, stripped-down, in a couple of rally races. Ironically, the LM002 eventually found a military purpose, when U.S. soldiers, unaware of its rareness, blew-up Uday Hussein’s model to simulate a car bomb in 2004. 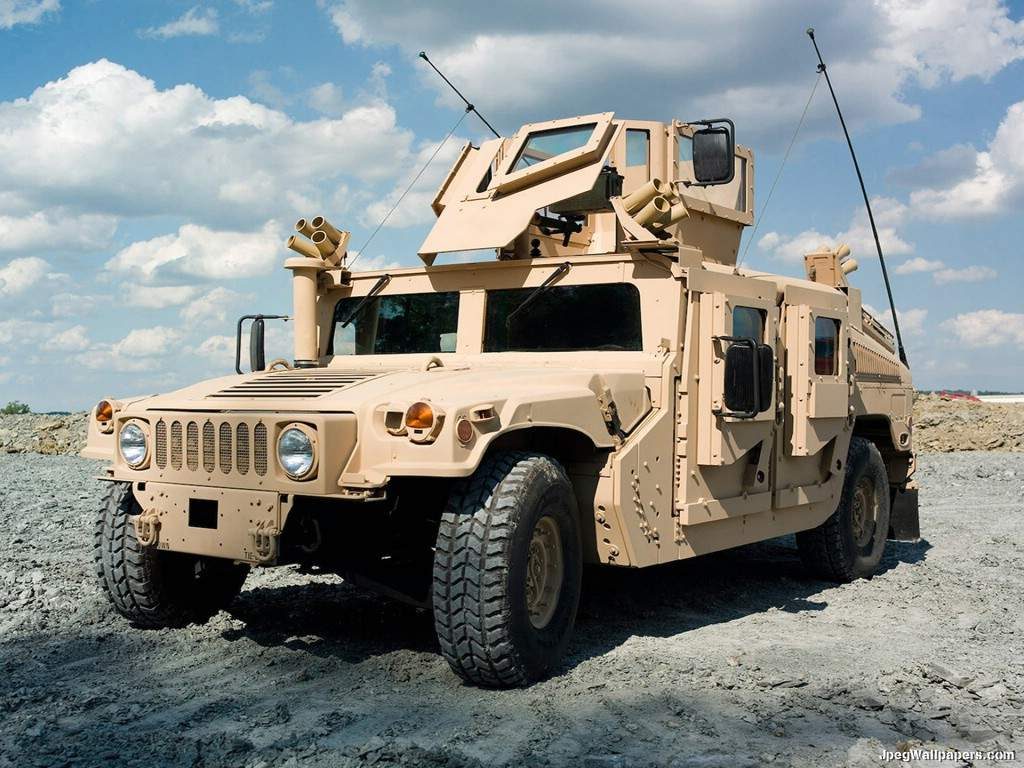 The U.S. military’s High Mobility Multipurpose Wheeled Vehicle (HMMWV) became known as the Humvee, which in turn inspired the civilian-offshoot Hummer brand. Largely supplanting jeeps as jack-of-all-trades light tactical military vehicles in the 1980s, civvy versions were unveiled in ‘92. While the original Hummer H1 closely resembled its military kin, the subsequent H2 and Chevy Colorado/GMC Canyon-based H3 were increasingly SUV-ish, and by 2010 the brand was no more. However, in 2014 the U.S. Department of Defense began auctioning-off some 4,000 “real” used Humvees to the public, intended for off-road use, with average prices around $30,000. 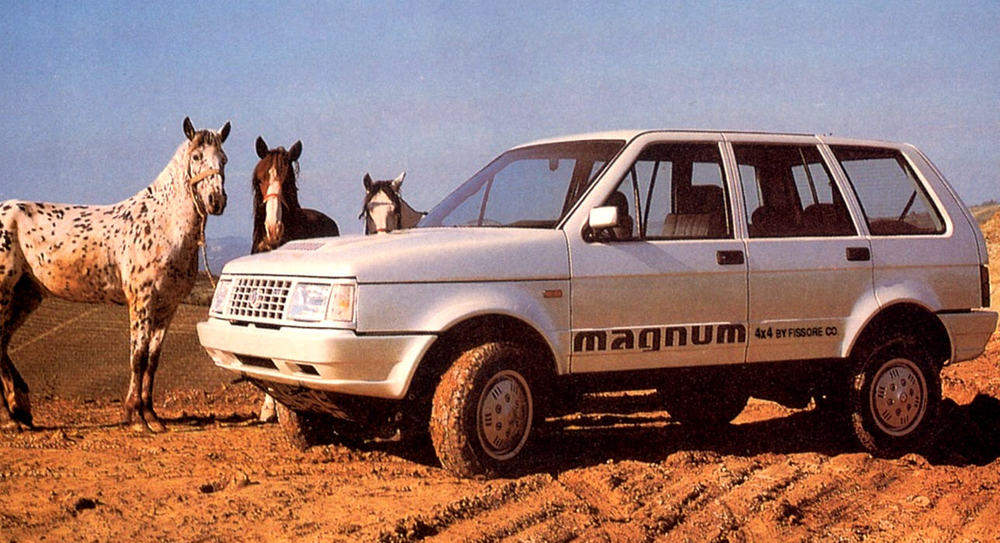 Initially conceived as a military and police vehicle, the Laforza was the U.S. incarnation of the Italian-made Rayton-Fissore Magnum, which lingered in low-volume production from 1985 until 2003. Based on the shortened, lowered chassis of a projected military off-roader, the Magnum defied its utilitarian roots to morph into a Range Rover-rivaling luxury 4-door with hand-stitched leather and burled-walnut interior accents and an array of petrol and diesel engines by Fiat, Alfa Romeo, BMW, and VM Motori. Though the stateside version boasted a Ford V8 mill, the Laforza ultimately proved over-priced, underpowered and doomed to cult status. 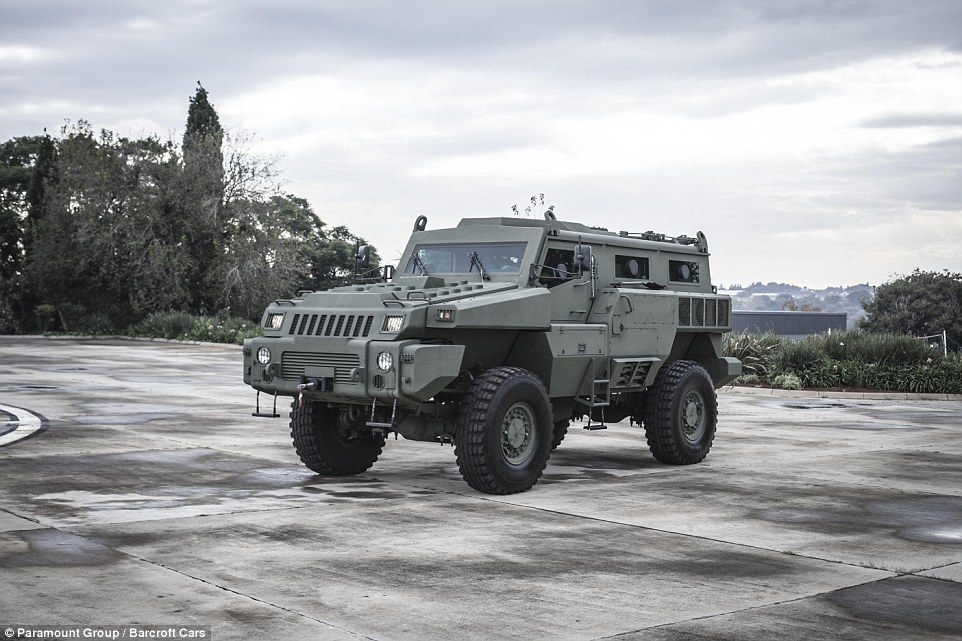 Developed by South Africa’s Paramount Group and also manufactured in Azerbaijan, Jordan, and Kazakhstan (as the winterized Arlan), the Marauder is a versatile reconnaissance and peacekeeping vehicle that carries up to 10 personnel. Though designed for in use in urban areas, it’s nonetheless incredible that this 11-ton, 21-foot behemoth is available for public sale. Even the de-fanged civvy Marauder can crush cars and walls (as Top Gear demonstrated in 2011), and it made Popular Mechanics’ “10 Best Vehicles for the End of the World” list in 2012. Starting around $500K, it’s probably the most expensive way to impress nine friends. 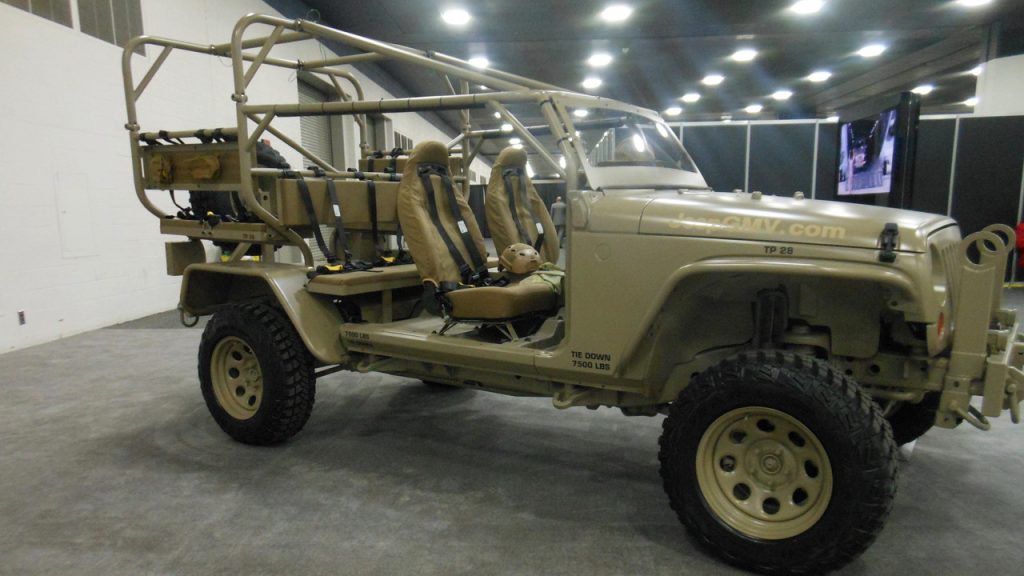 Debatably the granddaddy of today’s SUVs, the original jeeps were the 1941 Willys MB and Ford GPW, built for the U.S. War Department (the term “jeep” supposedly derived from slurring the designation “GP”, for “General Purpose”). Some 640,000 were produced for World War II, with civilian versions debuting in 1945. Trademarked by Willys-Overland in 1950, Jeep is now a thriving global brand and, while the U.S. military replaced them with Humvees in the ‘80s, the Jeep Wrangler-based GMV (“Ground Mobility Vehicle”) is currently vying to re-enlist. The U.S. hasn’t sold-off surplus jeeps in years, but they still list privately. 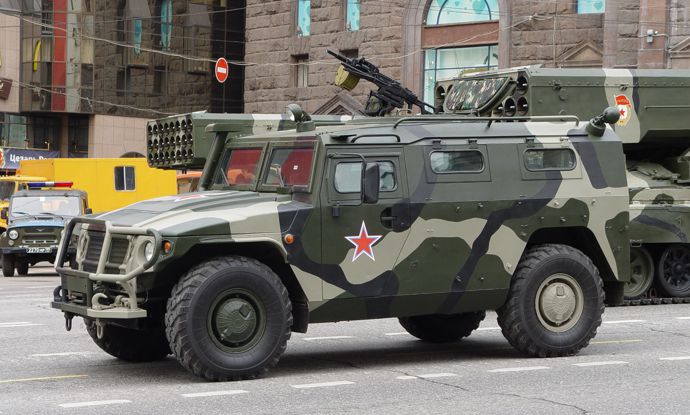 Renault has produced it Sherpa light tactical vehicles for the French military since 2006, and also supplied these Humvee-like 4x4s to international police and armed forces. But it was the Sherpa’s colorful appearances in the epic Dakar Rally that made it an aspirational vehicle for non-uniformed types. Available by special order in the Middle East, Russia and Africa since 2012, consumer versions comprise the everyday Sherpa Scout, commercial Sherpa Carrier pick-up, and armored, war-zone-ready Sherpa Station Wagon. Not to be outdone, Russia’s GAZ also sells a civilian version of its outwardly similar, all-terrain Tigr, with every imaginable custom individualization. This tops our list of military vehicles that now have civilian models 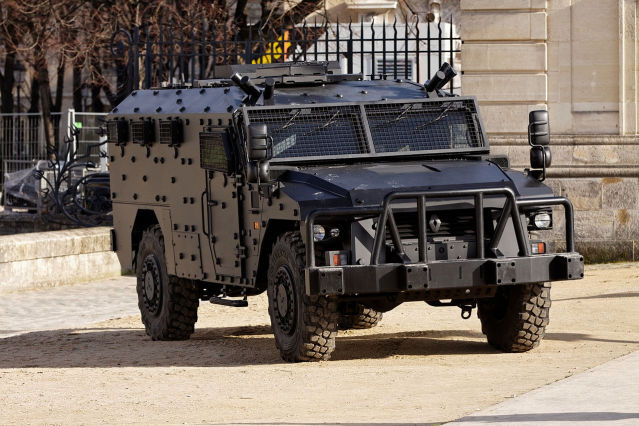 
Do You Call This Overlanding? The HISTORY Channel Does
12 Hot Hollywood Stars Driving The Sexiest Cars
2021 Bentley Bentayga Hybrid: 443 HP Ultra-Luxury SUV With G...
2023 Alfa Romeo Tonale: Sporty Plug-In Hybrid SUV Ushers In ...
This 1966 Ford Mustang Restomod is Sexy in Black
25 Most powerful Ford cars of all time (from 235hp to 1,200h...