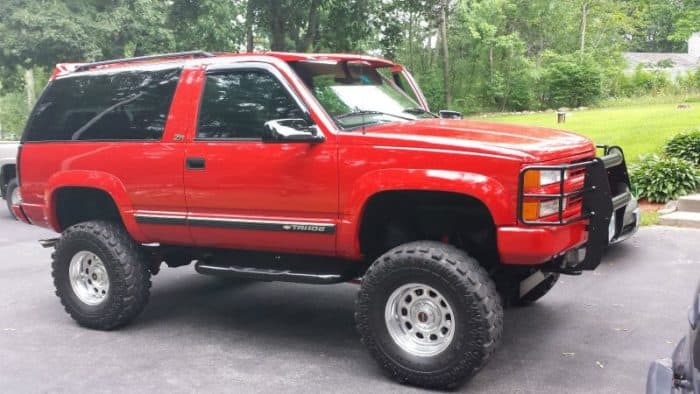 The Chevy Tahoe has always been one of the more noticeable SUV models on the road, and they usually get even better when the owner has it lifted and adds performance mods. It doesn’t matter if the end result is a rugged off-roader or a pavement princess; we love them all the same. In fact, we always love the look of a good lifted Tahoe, just like the 11 you’ll see in this list as we move through the four generations of the SUVs history.

Ever since there have been lift kits, people have been installing them on their vehicles, so it’s only natural that you’ll see scores of lifted trucks and lifted SUVs. Unlike lifted truck models from the likes of Ford, Dodge, RAM, and GMC, these lifted Chevrolet Tahoe 4WD models are a little less common, but almost twice as cool. Here are our favorite lifted Tahoe SUV models that we’ve ever seen!

What this lifted Tahoe lacks in terms of a rise to its suspension or chassis, it makes up for with wheels. The ride height gets a lift from a leveling lift kit as well as rims so large that they really draw attention. Even more noticeable is the attention to detail with the two-tone paint job on this 1995. The lighting all around is upgraded to LEDs that make even the stock front end look great. If this one isn’t high enough for you, continue on in the list for some high riding lifted Tahoes. 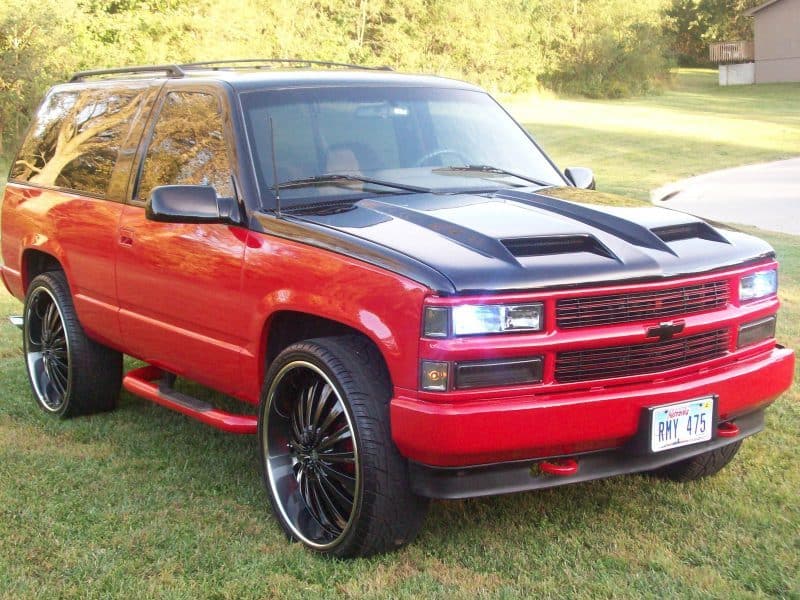 The six-inch Pro Comp lift kit that makes this lifted Tahoe ready to flex out is just the tip of the iceberg. It sits atop a set of Fuel Maverick wheels coming in at an impressive 20 by 14. The rubber wrapping the black rims is a set of 35-inch Kanati Mud Terrains, hinting at where the SUV can go. The finishing touches of green accents to the blacked out look and the roof basket are just right. 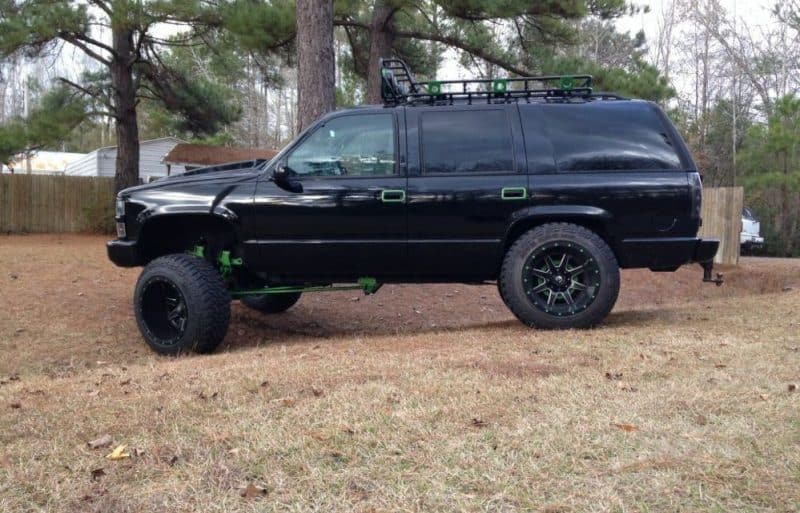 The last entry on this list for the first generation of lifted Tahoes is a gorgeous one. Beyond the eye-catching glossy red paint job, the most noticeable part is the huge wheels. It takes more than a few inches to get a set of Super Swampers to clear the inner fender of a lifted Tahoe. The pristine push bars on the front and body color matched windshield brow make us want to take it to the mud pit for a sunny weekend. Between the lift kit itself and huge tires, the addition of side steps was definitely a smart idea. Even better is knowing that the owner went to the trouble of supercharging this beautiful first gen. This is a stunning lifted Chevy Tahoe example! 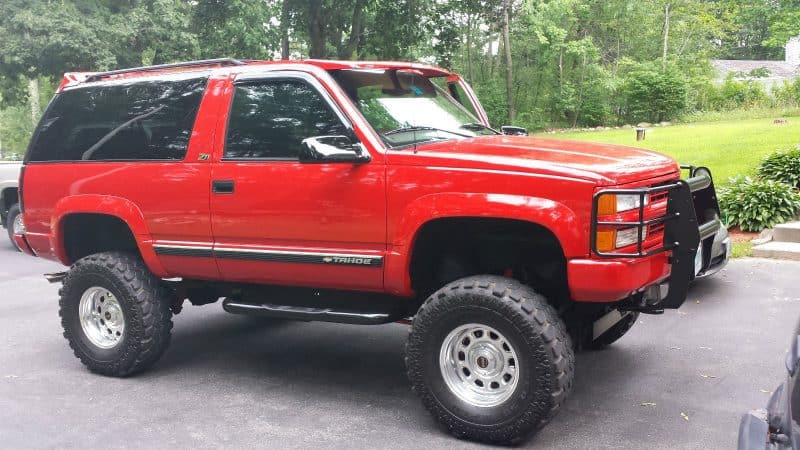 The second generation models of lifted Tahoe come out swinging with another red beauty on the list. Just like entry number two, this SUV sports Fuel Maverick wheels, but these have Nitto Grappler rubber around them. The roof basket is ready for all sorts of off-road gear storage and the long roof-mounted light bar lights the way. This means that this mean machine can take on the trails all day and all night long. The height on this lifted Tahoe comes from 3 inches on the body and six more through suspension thanks to Rough Country. 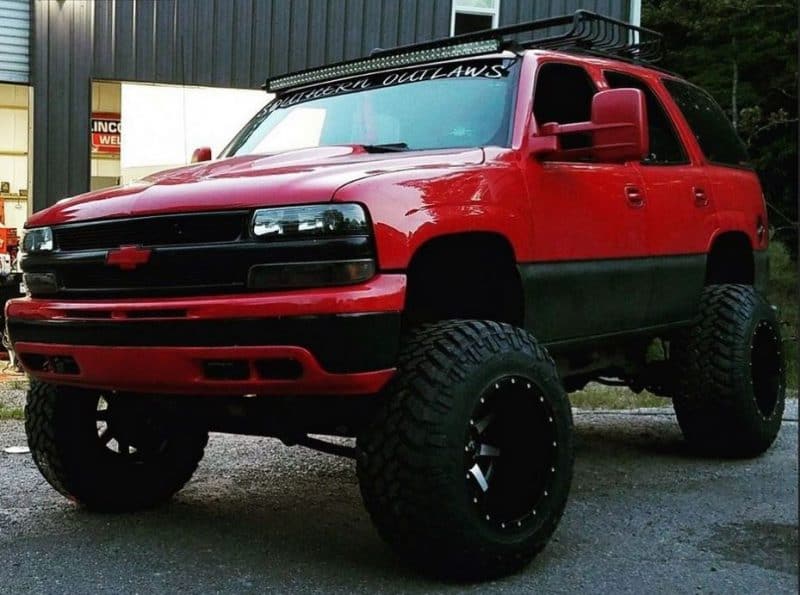 The Rough Country lift in this crisp white 2003 Tahoe provides us with all sorts of clearance and it rides in style. A set of KMC XD778 Monsters are wrapped in rubber that doesn’t have to be super aggressive for the SUV’s use. It seems like this lifted Tahoe spends most of its time on and around the beach. That’s no excuse to skip a lift though, because the second generation looks good from down here. To be honest, we’re glad that this clean white paint job doesn’t get filthy too often because it looks great. 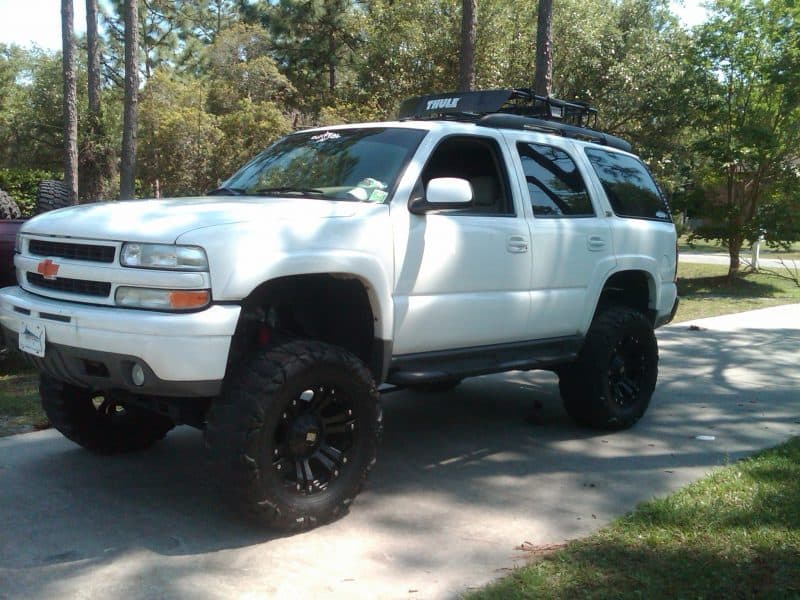 With the modest raise in this lifted Tahoe and its mods, this one could almost be mistaken for a police vehicle. Seeing this in the rearview mirror would definitely make us second guess our speed on the highway. With only 2.5 inches gained  from spring spacers, this is a livable height for those staying on the road. Most of the mods here, beyond the bull bar and LED lighting upgrades, are hidden on the inside. A cold air intake and a tune under the hood, as well as seating and gauge swaps round out the inside while a Ram Air hood adds just a little aggression to the look of this lifted Tahoe. 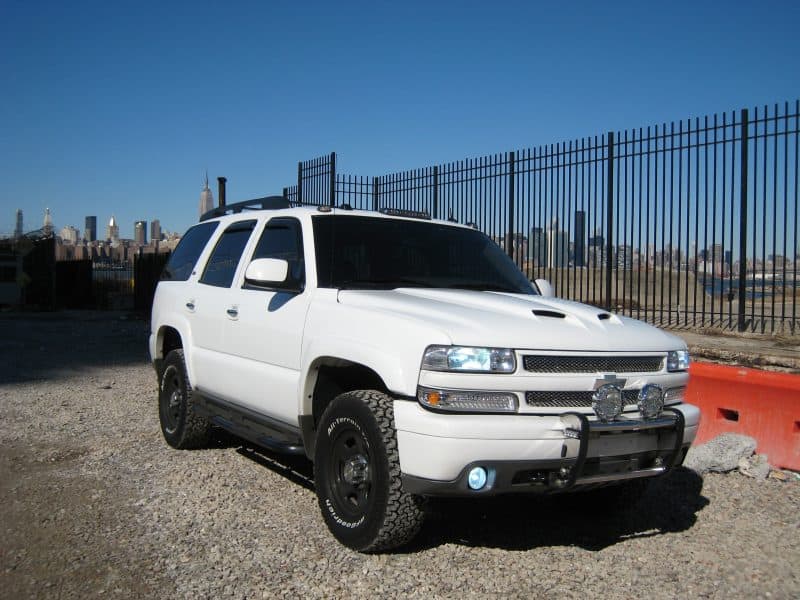 Like the generations before it, the third starts strong with impressive height on a lifted Tahoe. The four-door model gives lots of room to take everyone on an adventure, though you might have to help them up and in. With dual light bars mounted above the windshield, there’s no worries about losing your way at night. However, without body armor, we wouldn’t risk taking this into rocky terrain for fear of damaging it. 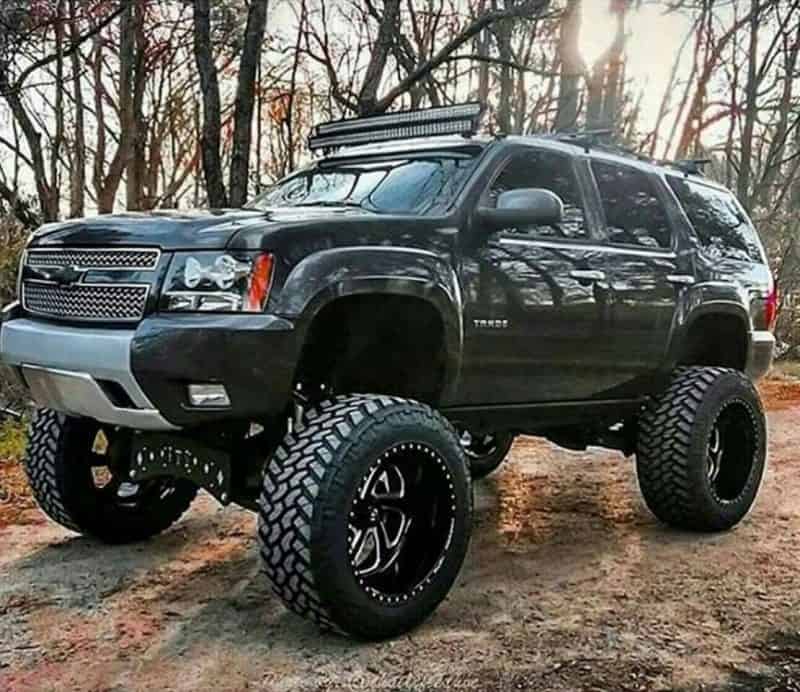 All of the vehicles we’ve seen so far are the pride and joy of their owners, but here we see our first dealership model. With LED upgrades to the lighting all around, this lifted Tahoe is sure to be seen. Its unique grille and Fuel wheels are sure to draw attention as well. On top of that, the fender flares add a wider feel to it. We have to wonder if this Canadian dealership would mind this SUV going for a test drive through some backwoods trails.

With all of the mods that can be done to an off-road ready vehicle, sometimes, less is more. Even though the third generation carries all the same markers, there something about the last couple years of it that are particularly special. This 2013 shows that with just a little work, even the simplest lifted Tahoe can look great. The KMC XD wheels from the Grenade series are a great addition that make the rest scream of its potential. This one is off to a great start with a six-inch suspension lift courtesy of Rough Country. This is one sweet lookin’ lifted 2013 Chevy Tahoe. 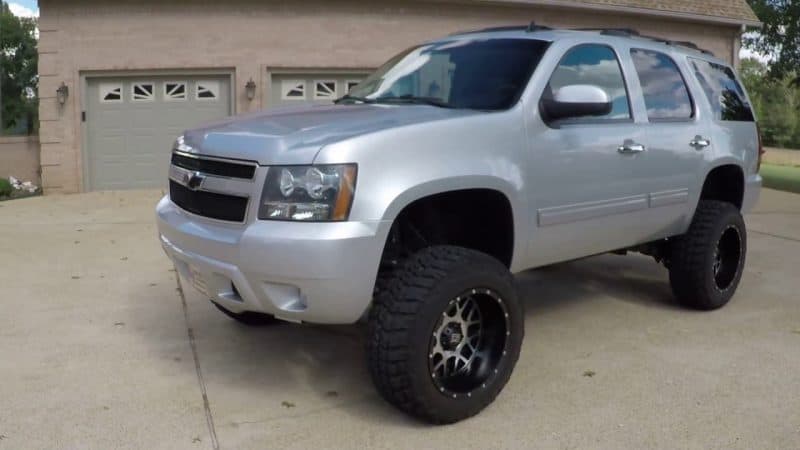 It’s not often we come across a lifted build that we wouldn’t dare take off-roading, but if there’s an ultimate pavement princess on this list, this would be it. The first entry of the fourth generation in our list of lifted Tahoes needs to stay clean and maintained. A total of 9 inches of suspension lift make room for this white SUV to ride on 37-inch tires. Specifically, these are Toyo Open Country MTs wrapped around polished American Force Jade wheels. The full mesh grille and insert in the bumper give a much broader and aggressive look as well. 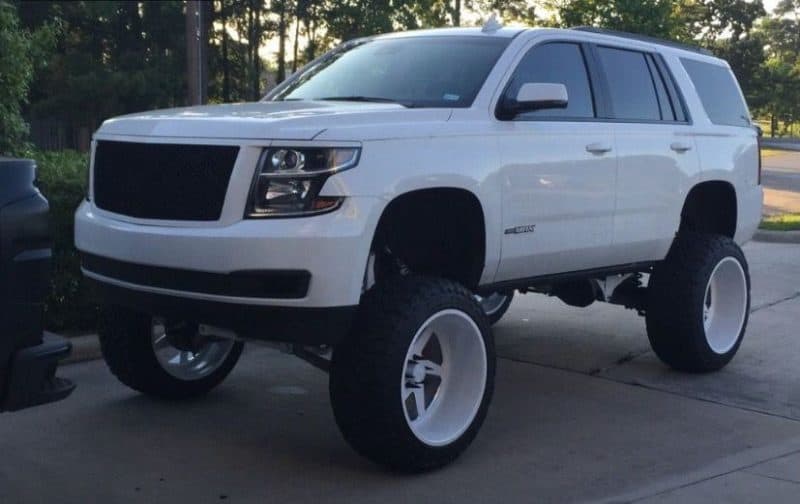 Last but not least is the lifted Tahoe put on display by Bulletproof Suspension to show off their impressive lift kit. It’s specifically built to fit the Tahoe’s nearest relatives, the Avalanche and Yukon, as well as the Chevrolet Suburban and Cadillac Escalade. Giving an impressive 10 to 12 inches of height, any SUV that uses it needs huge wheels and tires to match. The addition of a custom grille is a great final touch. 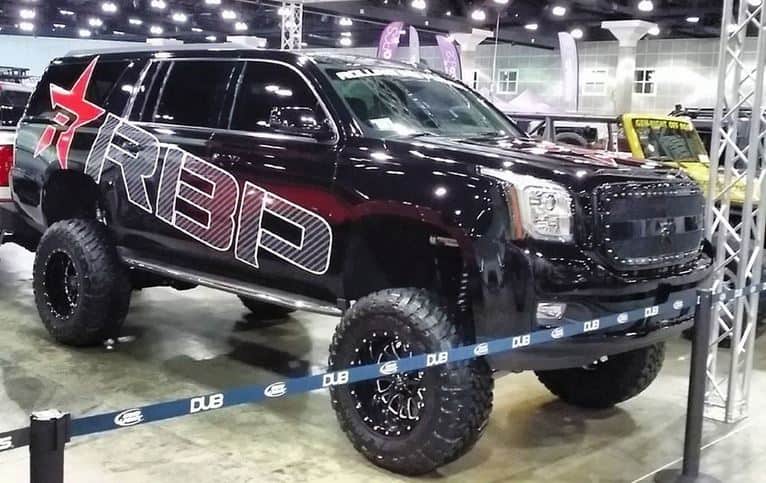 Are there any examples of a lifted Tahoe that you know of that should be on this list beyond the 11 here? What other SUV always looks better with an increase in its ride height? Which generation of this particular model do you think looks the best lifted? Do you own a sweet lifted Chevy Tahoe LTZ 4×4 that you want to show off? Feel free to share your thoughts in the comment section!


Facts You Didn't Know About Presidential Limo "The Beast"
The Best of 2021 GMC
2021 Will Be Last Year For Land Cruiser in U.S.
The Best of 2021 Genesis
10 Unlikely Joint-Venture Vehicles
5 Certifiably Insane Engine Swaps That'll Have You Shaking Y...