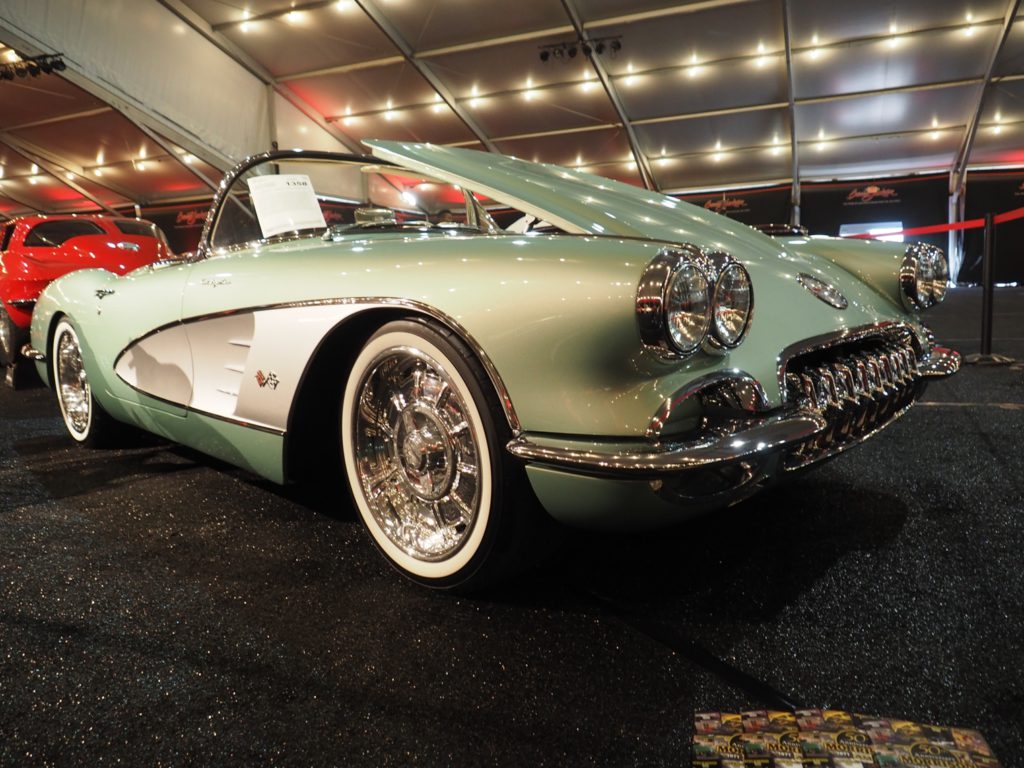 Joe Clevenger enjoyed restoring cars and selling them as a hobby in Missouri, but in 2007 while building a custom Corvette he wondered what interest and money it could bring with a bigger, nationwide audience. He brought that creation out to the 2008 Barrett-Jackson auction in Scottsdale, Arizona where it gained considerable interest and bids.

Ever since that first auction experience, Clevenger works all year on just one custom resto-mod Corvette and brings it out to Barret-Jackson to sell. Each year the builds get better and the selling prices go higher. Last week his latest custom Corvette, a 1959 convertible, sold for a record-breaking $825,000, to famous comedian Kevin Hart.

After graduating from the local Missouri vocational high school, Clevenger was hired at a local Chevrolet dealership, Lester Moore Chevy, to do paint and bodywork. That lasted for 4 years until he was accepted into the local electrical union. Later Clevenger formed his own electrical contracting company and now parlays his automobile skills into a hobby and stress reliever.

Clevenger stated he likes to restomod the early Corvettes and has no interest in doing a strict restoration using old technology. Clevenger noted that 8-10 people approach him each year at the auctions, asking if he would build them a car, but he always declines the offers. He prefers working on his cars with his own designs and inspirations and doesn’t want to answer to anyone else. He figures that the auction crowd will determine whether each year’s car was done right and hopes that the bidders appreciate his skills and designs.

During the 2018 auction, he was approached by an onlooker who asked if he would be interested in a 1959 Corvette. It was rough, but Clevenger never backed away from a challenge and it was soon heading back to Kansas City. When he returned home after the 2020 Barrett-Jackson auction, he went to work on this creation.

Clevenger started his 2021 creation with an Art Morrison C7 Corvette frame with independent front suspension, which he had powder coated. The hood electronically opens to reveal a clean engine compartment. He used a 2020 Corvette engine with a 4L75E overdrive automatic transmission. Wilwood brakes will help to slow down this custom convertible.

Clevenger doesn’t do the interior himself, but makes sure some modern touches are always present. The “wonder bar” radio may look old, but has been outfitted with new technology including Bluetooth and links to a modern sound system.  The entire car has LED lights for a nice modern, clean look.

Being an old-school body man, Clevenger spent over 400 hours working on the Corvette body. He had the all original body completely stripped with glass beads before making sure all the body gaps were even and body panels straight as an arrow. The paint, Franny Green, is a custom PPG mix that took Clevenger ten tries before he was happy with the look.

After all the work and sweat, Clevenger brings out the Corvette and awaits his car’s fate. Since his Corvette is sold without a reserve, whatever the highest bidder offers is what the car is sold for.

Clevenger previously held the world record for the highest-selling custom Corvette for his 2018 build of a 1959 Corvette that sold for $440,000.

Barrett-Jackson tacks on a 10% buyer’s premium to the high bid and Clevenger pays a seller’s commission, generally 10%, of the final bid price. This year the final bid was an astounding $750,000, meaning the seller paid a final price of $825,000 and Clevenger walked away with a check for $675,000.

The buyer this year was comedian Kevin Hart, who is no stranger to collecting cars. After his horrific crash in 2019, he rebounded health-wise by buying a custom 1970 Dodge Charger. Something tells me that this won’t be the last we hear about Hart and Clevenger’s 1959 Corvette build.

Clevenger says this is a hobby for him and still fun. He enjoys bringing out the cars to the auction, hearing comments from onlookers, and meeting with other sellers. He reasons that if he treated this work as a business and not a hobby, all the fun would be gone.

We can’t wait to see what he brings out for the 2022 auction and what price it brings.