If you think that owning a unique car means spending serious moolah on a high-end brand or pristine classic, think again. Because it’s not only beauty that grabs attention in the automotive world, but also novelty and rarity.

We rounded-up 10 obscure and oddball, love-‘em-or-hate-‘em, unique used cars that will certainly attract stares (of either awe and/or horror) – and are currently available for under $10,000. 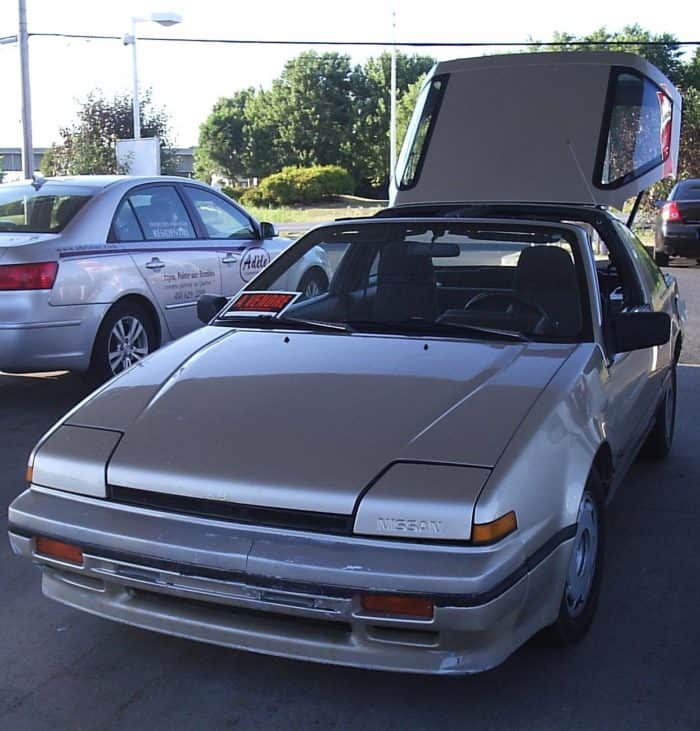 Nissan’s largely forgotten Pulsar NX Sportbak is a classic example of an idea that looks great on paper not translating into the real world. Debatably, it’s the first (if not the only) modular production car. It’s a sporty compact that owners could convert in minutes into any number of configurations to suit their needs or mood.

Ostensibly a two-door Sentra, upon closer inspection the Sportbak offered so much more. For starters, it had removable t-tops. But, wait, the rear hatch was also removable, leaving a kind of truck-bed back. And, there’s more: the Sportbak also had an optional wagon back that slotted into place where the hatch normally went. Presto – you had yourself a fun and practical shooting brake!

Pop-up headlights and slatted-cover taillights complete the awesome ‘80s-ness of the Sportbak. But, even these couldn’t save it (or, apparently, the whole modular car idea). Pulsar Sportbaks come up for sale for even under $5,000. And for that, you (kinda) get at least four different cars in one. 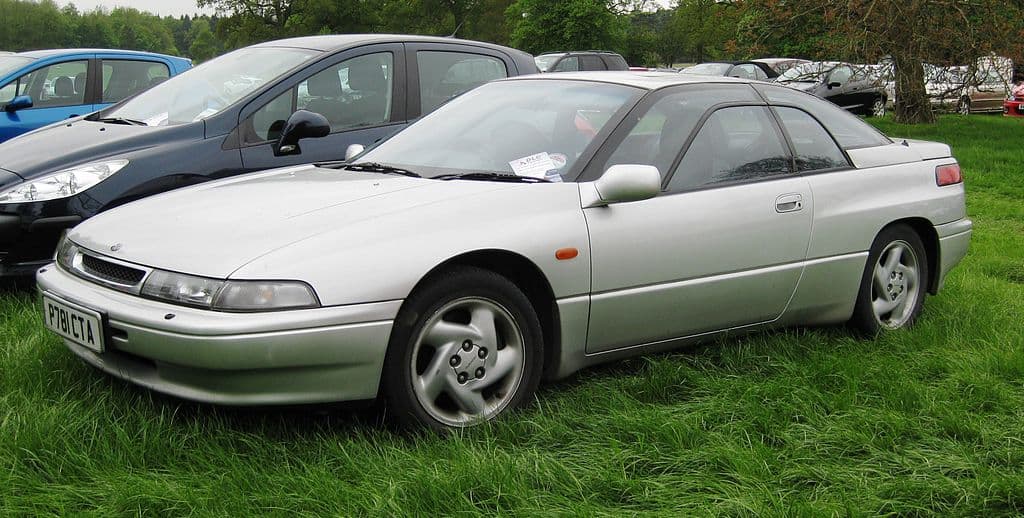 Subaru’s quirky image traces back to cars like the eccentric and ambitious SVX coupe. This was the Japanese company’s first dip into the luxury/performance niche. But sadly it only survived a single, 5-year single generation production run. The SVX was available with all- or (for the 1994-1995 year model) front-wheel drive.

The Subaru SVX’s unorthodox appearance was the work of legendary Italian designer Giorgetto Giugiaro. Most notable was its “aircraft-inspired” window-within-a-window configuration. But Subaru was not rewarded for its boldness with the concept-like SVX, which was almost identical to its Alcyone SVX show car.

It was intended as more as a “touring” model than a sports coupe. It only had an automatic transmission and a 231-horsepower 3.3-liter flat-six. This combo simply couldn’t match the performance of its contemporary Japanese sports car rivals. Rumor has it that Subaru’s relatively conservative contemporary designs are a lingering legacy of its losses on the SVX.

You can own a Subaru SVX for well under $10,000 today. But, with parts almost non-existent, be ready for some losses of your own. 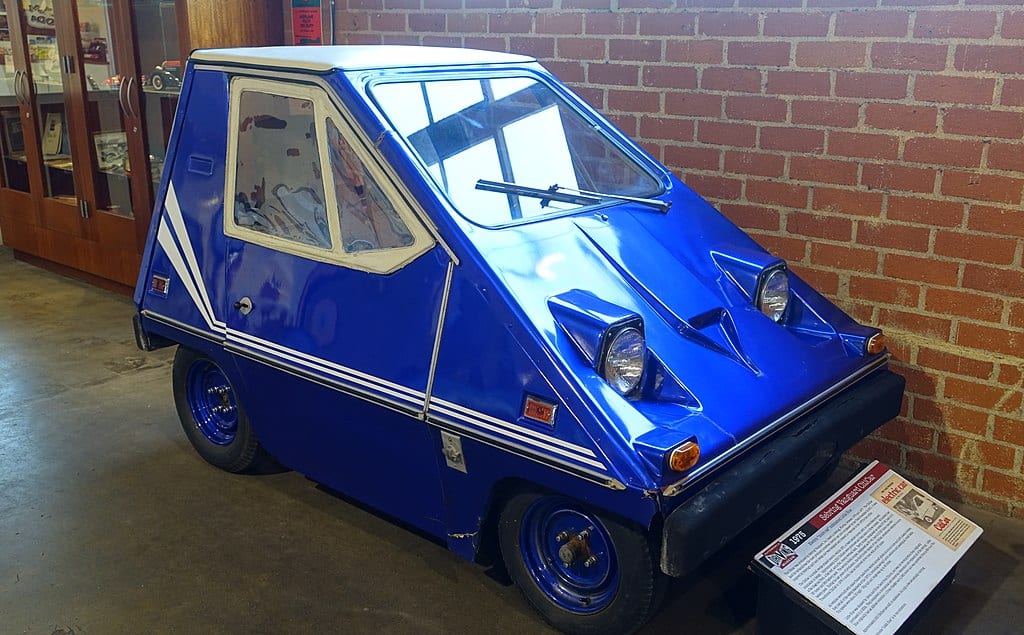 Appearing at a time of giant American automobiles and famously unstable oil prices, the supremely spartan electric CitiCar was a knee-jerk reaction on wheels. Essentially a wedge-shaped, fully-enclosed street-legal golf cart. It was, as its name suggests, intended for short urban trips. It boasted a top speed of just 38mph and a total range of around 40-miles, but was no joke.

With more than 2,100 made, the two-seater CitiCar had the largest production of any American electric car for some 35-years, until the Tesla Model S came along. In 1976, this made its creator, Sebring-Vanguard of Florida, the country’s number-six automaker.

An exercise in minimalism that looked futuristic at the time, the CitiCar would probably best serve today as a runaround on a private estate, an attention-grabbing mobile billboard, or an errands car in a small town with minimal traffic. At the time of writing, a used car dealer in Michigan was offering a really nice example of this pioneering piece of automotive history for $6,900. 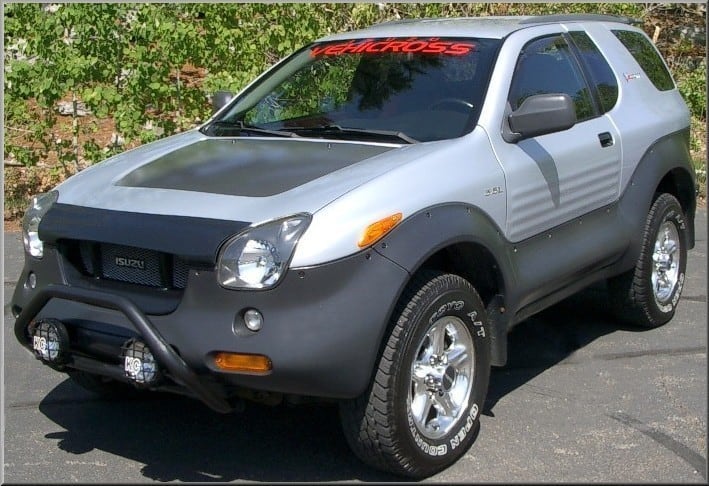 Isuzu intentionally limited production of its VehiCROSS compact SUV to fewer than 6,000, between 1997 and 2001. The brand sold more than two-thirds of these in the U.S. during the latter half of this period. So there are normally a few for sale, with only the very cleanest examples topping $10,000.

The VehiCROSS was based on the cute little 2-door Isuzu Amigo. Another vehicle that looks almost identical to its concept, the VehiCROSS was intended to show-off Isuzu’s off-road prowess. It features a body-on-frame design, solid rear axle, and monotube shocks with external heat-expansion chambers.

While the VehiCROSS’s BorgWarner Torque-On-Demand 4-wheel drive system was great off-road, and its computer-controlled AWD worked great on-road, it is perhaps most recognized for its radical exterior styling. Black plastic cladding hugs the entire lower half of the vehicle, complimented by a black hood insert. Short overhangs and an aggressive forward stance complete this extremely capable vehicle. It will no doubt turn-heads, as it has the aesthetic appeal of a basketball shoe. 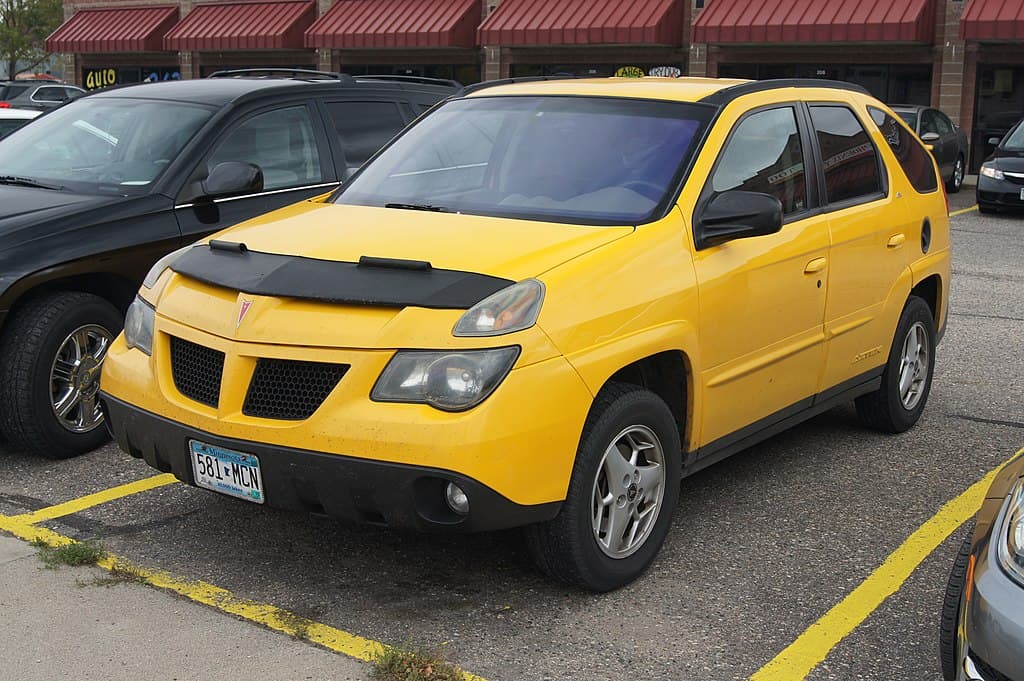 The mid-size Pontiac Aztec crossover has become almost synonymous with automotive folly. The controversy revolved almost solely around its aggressive but seemingly haphazard exterior styling. While intended to signal a design renaissance for General Motors, it failed. Pulitzer Prize-winning automotive critic Dan Neil compared the Aztec to “something that dogs bark at and cathedrals employ to ring bells.”

This is a shame because beneath its ungainly exterior the Aztec is an extremely practical and versatile vehicle. As well as 94 cubic-feet of cargo room, it boasts novel features like a bi-parting rear tailgate, the lower portion of which has seat indentations and cup holders for picnicking. The upside of the Aztec’s ugliness is that, if you really don’t care what the neighbors think, it can be a real bargain. At the time of writing, a “nice” Aztec, with just 90,000 miles on it, was listed for only $2,990 in Texas. 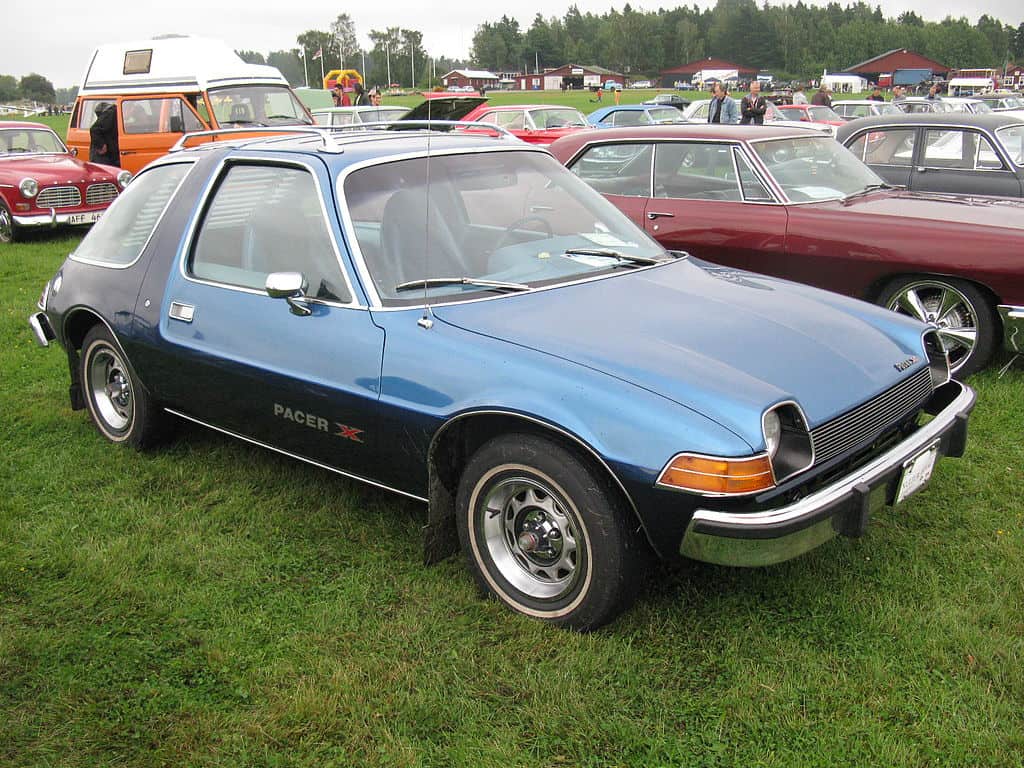 The compact-yet-bulbous AMC Pacer is perhaps best-known as the baby-blue “Mirthmobile” in 1992 comedy Wayne’s World. This association has only added to the Pacer’s semi-joke status. But, upon release in 1975 its rounded shape and wide stance were bold statements in an era of boring three-box designs. With a 37-percent glass body and cab-forward design, the Pacer personified 1970’s futurism and defied almost everything that was rolling out of Detroit at the time.

Initially drooled over by journalists for its audacious aura, critics soon began tempering their opinions due to the Pacer’s sluggish performance and incongruously poor fuel economy. It got just 18 mpg in city driving.

In 1976 more than 117,000 Pacers were sold. A less weird-looking wagon version, introduced the following year, actually out-sold the sedan. Even so, the Pacer only enjoyed a four and a half-year run, and today is frequently featured on “biggest clunkers” lists. Pristine examples fetch over $25,000, but running Pacers can be found for well under ten grand. 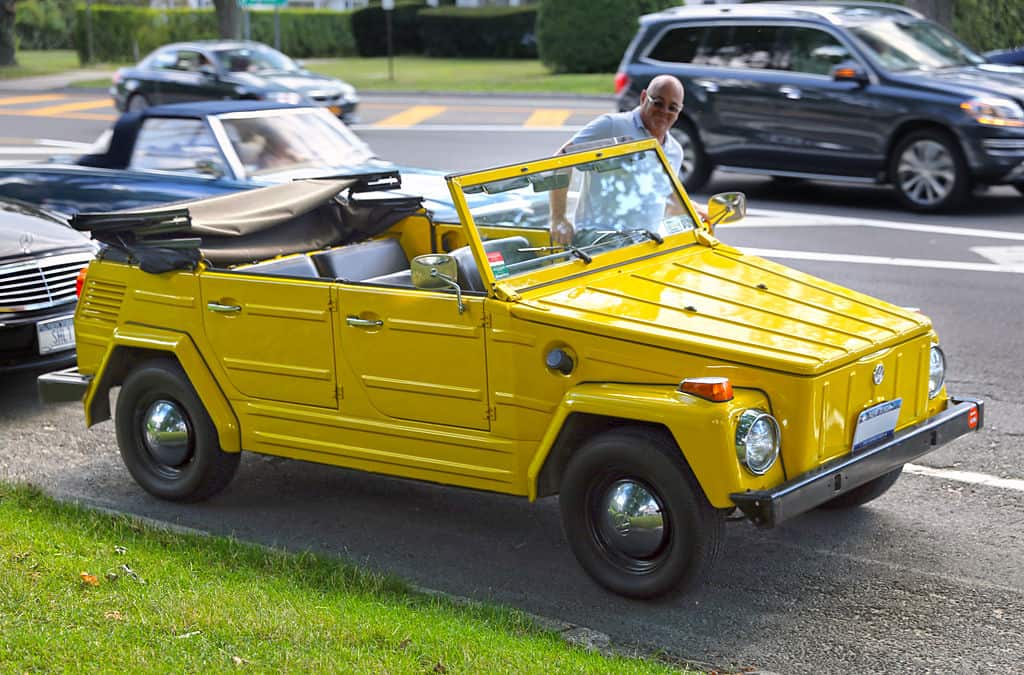 Originally developed for the West German Army the VW Type 181 was marketed as the “Thing” in the USA. The VW Thing ostensibly resembles the World War II-era Kübelwagen seen in many a war movie. It is a utilitarian four-door convertible with removable doors and fold-down windshield. It uses mechanicals common to VW’s classic Beetle and Microbus models. The Thing was intended as a leisure-focused dune buggy-on-a-budget for American buyers and a rugged workhorse for the rural roads in less developed parts of the world.

It was super-basic, even by the standards of its time. The Thing had an interior of mostly just painted metal panels and perforated rubber mats. The Type 181 was manufactured in Germany, Mexico, and Indonesia. It sold (under various names) in multiple international markets. But VW dropped the Thing from its U.S. lineup by 1975 after failing to meet stricter new safety standards. Only 26,000 sold stateside.

Pristine VW Things can command pretty serious money among collectors. But, project-condition examples can still be found for under $10,000. 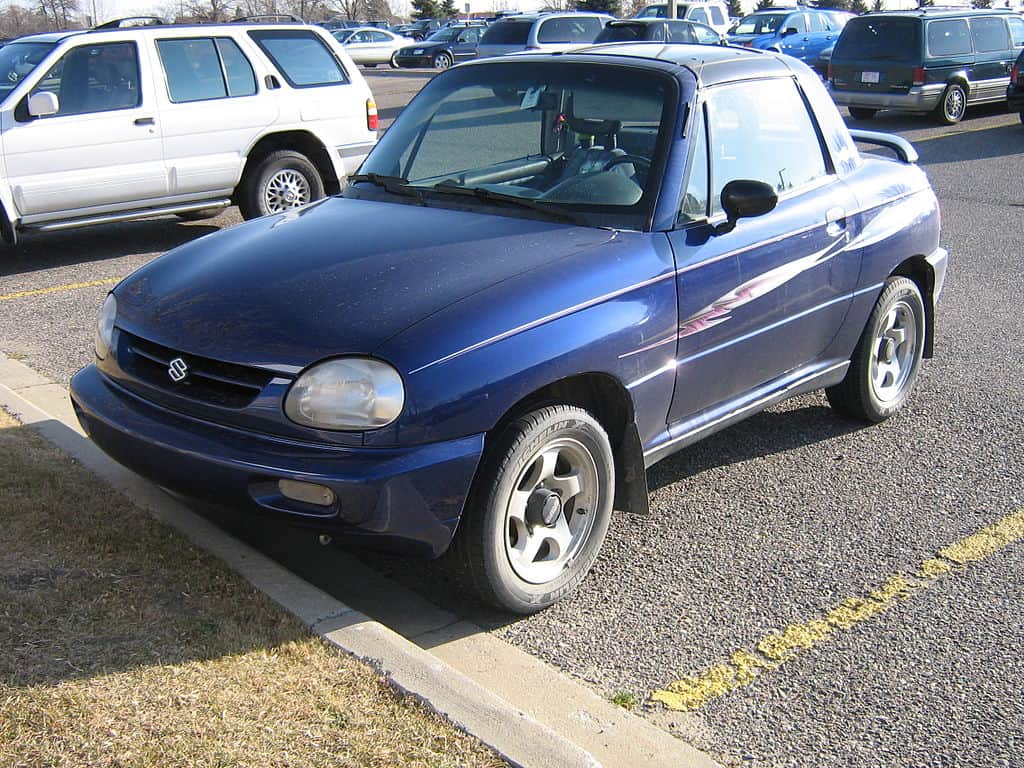 The ability of the Suzuki X-90 to turn heads is underlined by its widespread use as an advertising vehicle for Red Bull energy drinks (albeit with a giant Red Bull can mounted on its trunk). Though billed as a two-seater SUV, the X-90 more closely resembles something that might go round-and-round on a fairground ride. With only two doors, no rear seat, and a sedan-style trunk in place of a cargo area, it manages to obliterate almost all utility from the sport-utility concept.

In fairness, a four-wheel-drive option and removable t-tops might lend credence to the “sport” tag. Yet the Suzuki Sidekick-based X-90’s small-but-tall stance, rounded edges, and often garish paint jobs stifled any perception of ruggedness, leaving only novelty value behind. If Mr. Bean was American, he’d surely have driven one.

Unsurprisingly, X-90 production lasted only two years, with 7,200 imported to the USA. Even really clean examples, with less than 100,000 miles, have recently sold for under $5,000. 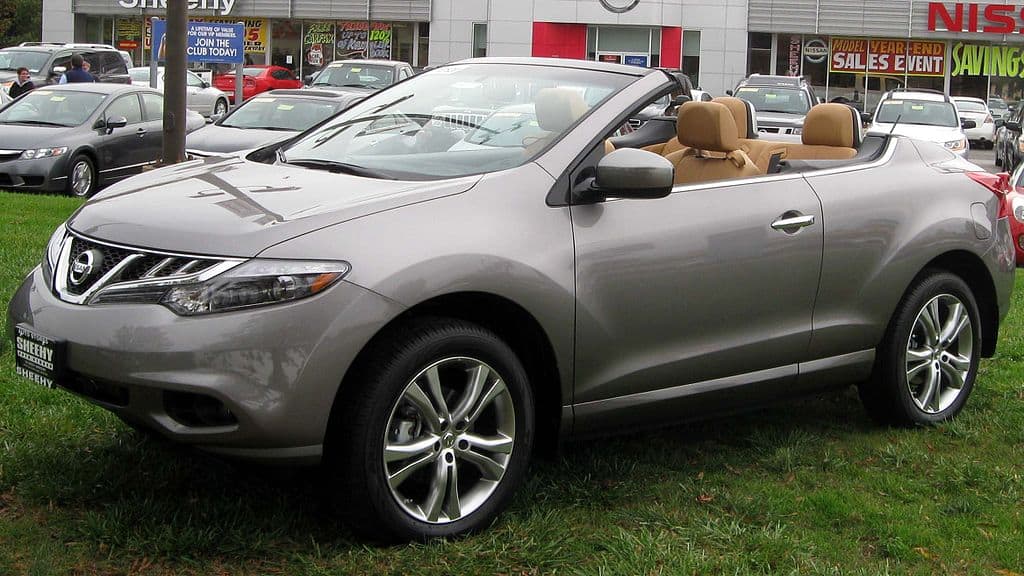 Upon unveiling its Murano CrossCabriolet at the 2010 Los Angeles International Auto Show, Nissan declared it “the world’s first all-wheel-drive crossover convertible.” But did anyone really ask for such a sub-sub-category in the first place? Judging by the brevity of the CrossCabriolet’s three-year production run, the answer from drivers was a resounding “no.”

In truth, such an eccentric idea should never have progressed beyond the concept stage. Not only did Nissan actually produce this ill-conceived mutant, they also had the nerve to charge nearly $42,000 for the privilege. Critics complained of poor rear visibility, alarming cowl shake, tepid performance, and nothing even resembling SUV-ish practicality. In attempting to make some sort of automotive Swiss Army Knife, Nissan only compromised every intended function.

But, if driving on dirt roads with the top down is your dream, CrossCabriolets can be found for just under $10,000. Although, around $15,000 is more typical. 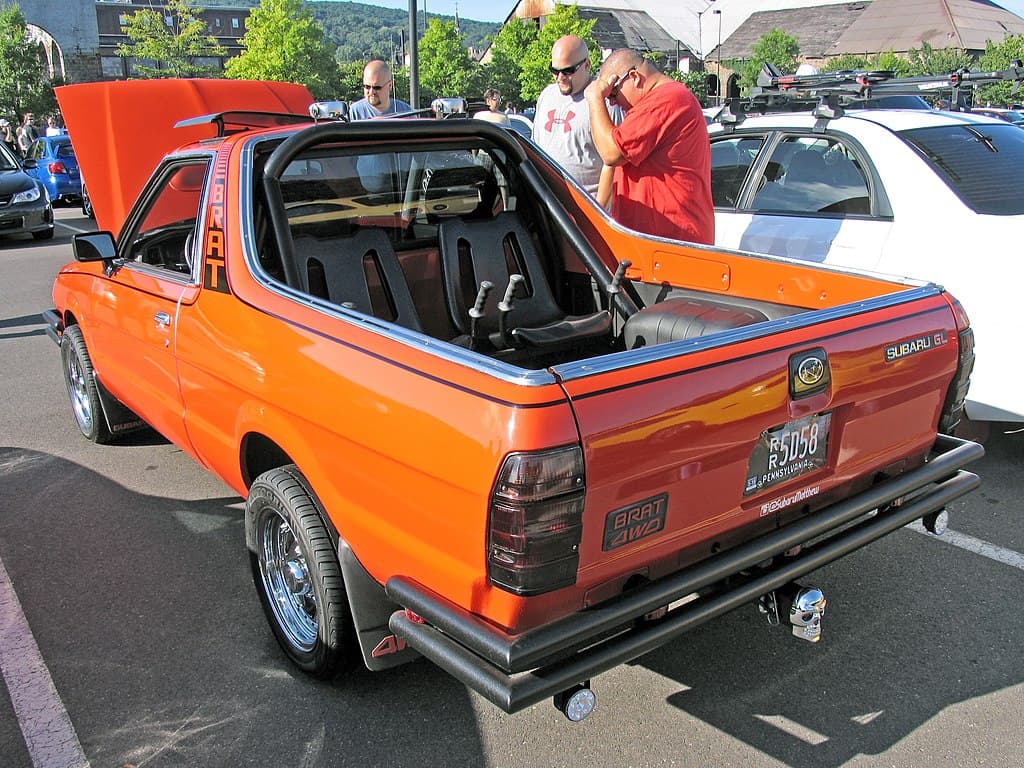 While its BRAT name (in North America) stood for the rather tongue-twisting “Bi-drive Recreational All-terrain Transporter,” this charismatic little Subie was more commonly recognized as a 4-wheel drive coupe utility. Aside from optional t-tops and the wonderfully period-piece targa stripes which often adorn BRATs, the main talking point is a pair of rear-facing jump seats. In pre-1986 U.S. and Canadian models only these jump seats were welded into the cargo area directly behind the cab.

Like many automotive eccentricities, these were actually a tariff-dodging ploy. The jump seats allowed Subaru to classify the BRAT as a passenger car. This was of course to avoid America’s 25% “Chicken Tax” tariff on light trucks. The real-world usefulness of the jump seats is debatable, as rear passenger laws for trucks vary from state to state.

For its 1980-1982 model years, the BRAT also boasted a bizarre “Cyclops” third headlight. The third light was hidden behind a flip-up Subaru logo in the center of the grille. Many survivors are in only restoration condition, but road-worthy BRATs can be found for under $10,000.