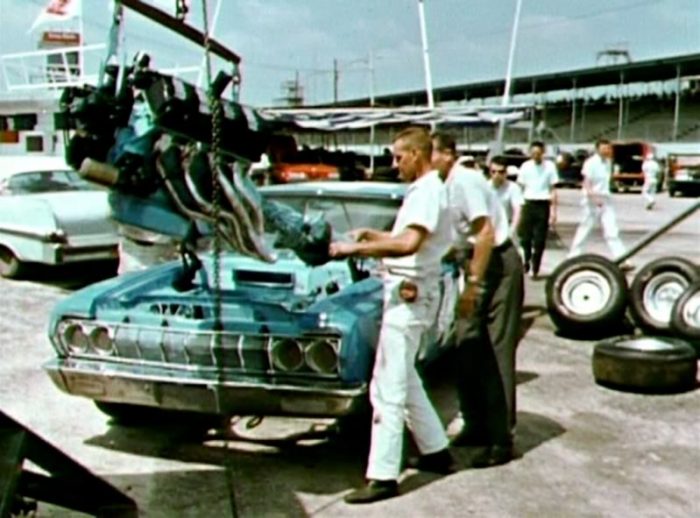 Hemi is now inexorably linked to Chrysler’s combustion chamber design, despite not being the first company to use it. Here’s a brief history of the Hemi. 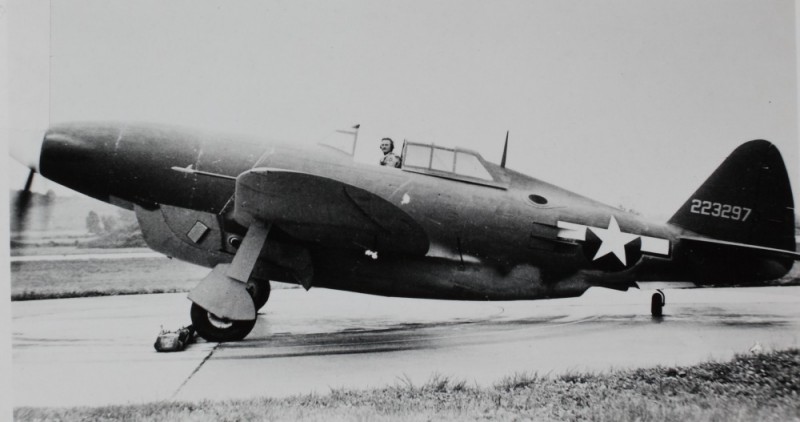 A development P-47 Thunderbolt powered by the first Chrysler Hemi. Reportedly capable of over 500 mph, it was doomed by the advent of jet aircraft.

The first Chrysler Hemi was actually the massive 36 liter XIV-2220 inverted V-16 aircraft engine developed by Chrysler during World War II (but never went into production). The engineers who worked on the project gained valuable experience with cylinder head gas flow  which they later applied to somewhat smaller engines.

What is A Hemi Engine?

First things first, what exactly is a Hemi engine? The name “Hemi” comes from the word hemispherical, and it’s that shape that makes a Hemi engine what it is. These internal combustion engines use special hemispherical combustion chamber roofs, which allow for angled valves with a bigger size, and enhanced porting. The revised shape has a smaller surface area than a regular engine, allowing for less heat to escape and for fuel to burn hotter. And the bigger valves allow for better air flow too. All in all, it’s a revolutionary engine design that has been revised and streamlined over the years, and here are all the Chrysler Hemi engines ever made…

To keep things simple, we’ll refer primarily to the three generations of Hemi engines. Generation I were the models built for various Chrysler Corp. nameplates throughout the 1950s. Generation II was the 426 “Elephant Motor” created for NASCAR racing in 1964 and sold to the public in passenger cars starting in 1966. The engine was revived and updated as part of a Mopar crate engine program. Generation III are the Hemi engines that are being produced today. 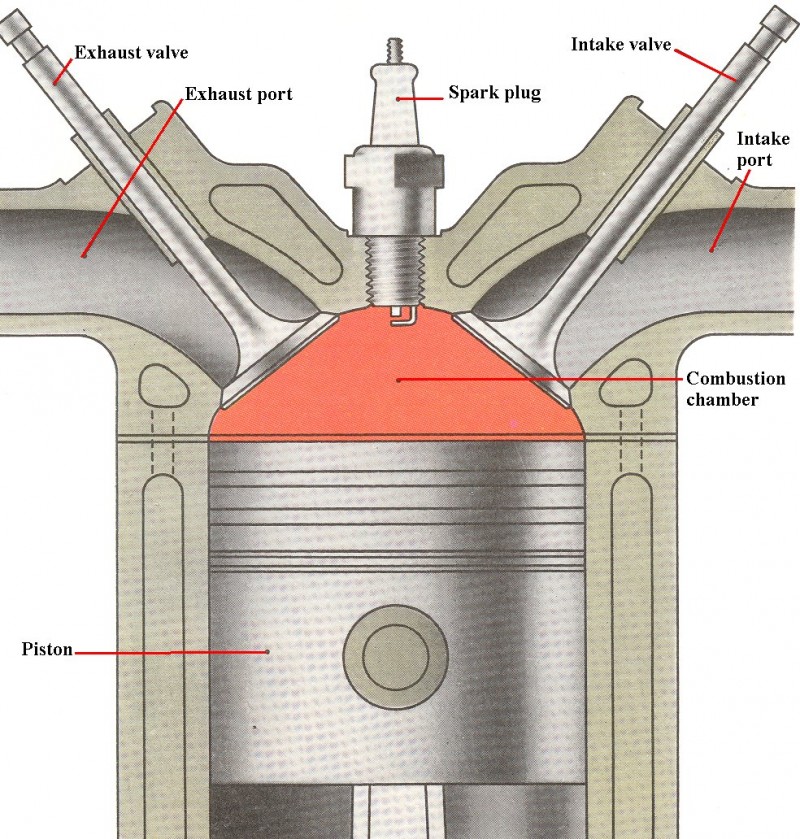 In 1951, Chrysler introduced their new line of V8 motors, popularly known as the Hemi, because the combustion chamber was fully machined into the shape of a 1/2 dome or hemisphere. The intake and exhaust valves were located on opposite sides of the combustion chamber at 90 degrees to the cylinder bore axis, so separate individual rocker shaft assemblies (two on each head) were necessary to operate and control all sixteen Intake and Exhaust valves. It also centralized the location of the spark plugs,making the flame travel shorter, thus more effective in lighting off the air/fuel mixture.

It also gave the combustion chamber, greater thermal efficiency. These engines run cooler because of having a greater surface for heat transfer along with large cooling passages. This design also allowed higher compression ratios, due to its larger volume. Hemi cylinder designs utilize two rocker shafts per head and a complicated valve train. This process proved to be extremely costly and would eventually exceed production costs. Phasing out the Hemi head in the late 1950s in lieu of a much cheaper wedge head design was inevitable. 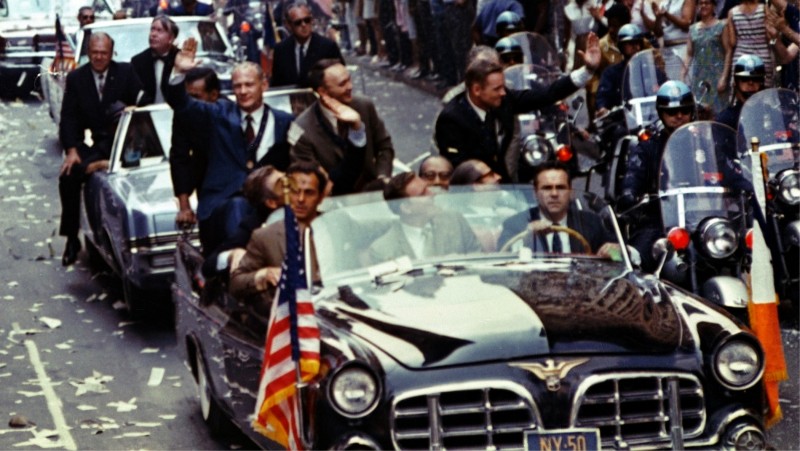 A 331 CID fuel-injected Hemi engine, producing 410 hp, is fitted to a Kurtis Kraft 500A roadster and tested at the Indianapolis Motor Speedway. It ran for 1500 miles, including a simulated 500 mile race which it completed at 4 mph faster than the track record. Alarmed, officials lowered the maximum displacement for stock block engines from 340 CID to 270 CID. Chrysler chose to withdraw.

The 354 CID engine was released in 1956, The 300B engine was rated at 340 hp with an optional 355 hp version available, making it the first American V-8 to be rated at one horsepower per cubic inch. The New Yorker and Imperial 354 engines produced 280 hp.

The Hemi was optimized for truck service as well. These were available with one or two four-barrel carburetors, and were offered in Dodge’s heaviest duty models as the ‘Power Giant V-8’ from 1957 through 1959; they were the largest of four hemi truck engines offered by Dodge in the 1950s.

The 354 engine was used in the following applications:

A rare option available on the 1958 300D was Bendix “Electrojector” fuel injection, with which the 392 was rated at 390 hp. Due to reliability problems with the primitive onboard computer which controlled the injection system, however, 15 of the 16 300D cars built with the fuel injection option were reportedly retrofitted with carburetors.

The 392 engine was used in the following applications: 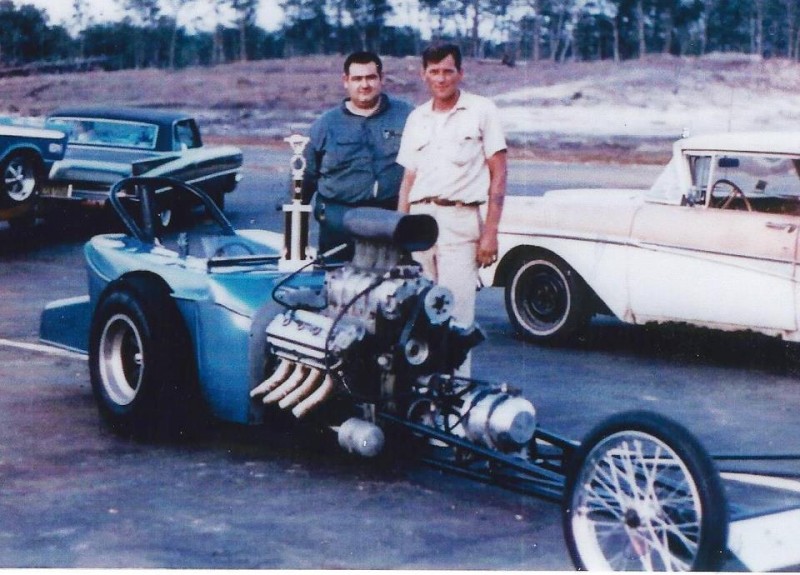 In the late 1950s and early 1960s, drag racers found the 392 to be a formidable engine and continued to run them competitively into the 1970s. 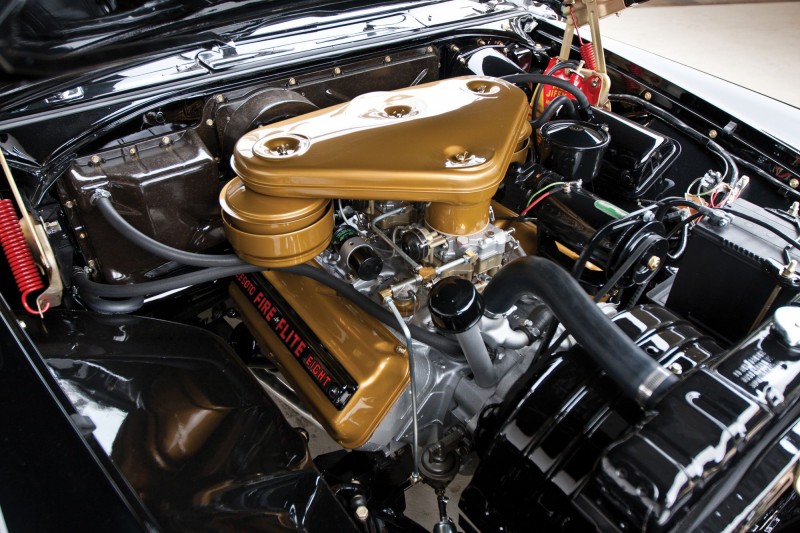 Under the hood of a 1956 DeSoto Adventurer

The largest DeSoto engine for 1957 was the DeSoto Adventurer at 345 CID (5.6 L). Equipped with dual four-barrel carburetors the engine produced 345 bhp.

The first Dodge Hemi was introduced in 1953 as the Red Ram.

Dodge did not have a Hemi V8 engine until one was developed specifically for the line in 1953 based on the 1951 Chrysler Hemi design, but down-sized for these smaller cars. They do not share any major dimensions or components with the larger Chrysler and DeSoto Hemi engines. 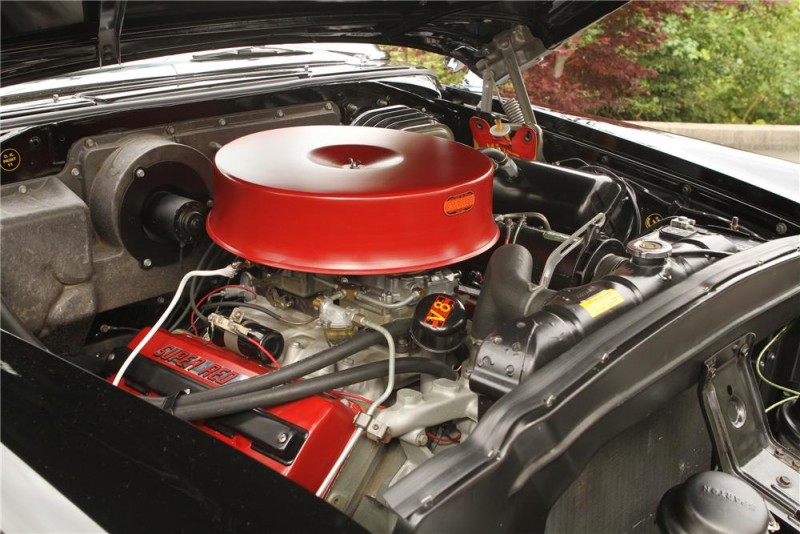 For 1956, Dodge offered an optional high-performance D-500 version of the 315 CID (5.2 L) Hemi engine with a four-barrel carburetor. In addition, a “race only” package called the D-500-1 was available through special order with a high flow aluminum intake manifold that carried a pair of four-barrel carburetors. The D-500-1 engine utilized the same Hemi cylinders heads as the base D-500 model.

Dodge released a 325 CID (5.3 L) engine for 1957. The base engine came with non-Hemi ‘KDS’ heads while a higher performance 325 was offered with Hemi heads as the ‘KD-500’. Again there was the option of a ‘KD-500-1’ package with dual four barrel carburetors. At this point, all engines carried hydraulic camshafts even though the Hemi valve covers continued to feature dimples to clear the mechanical adjusters. 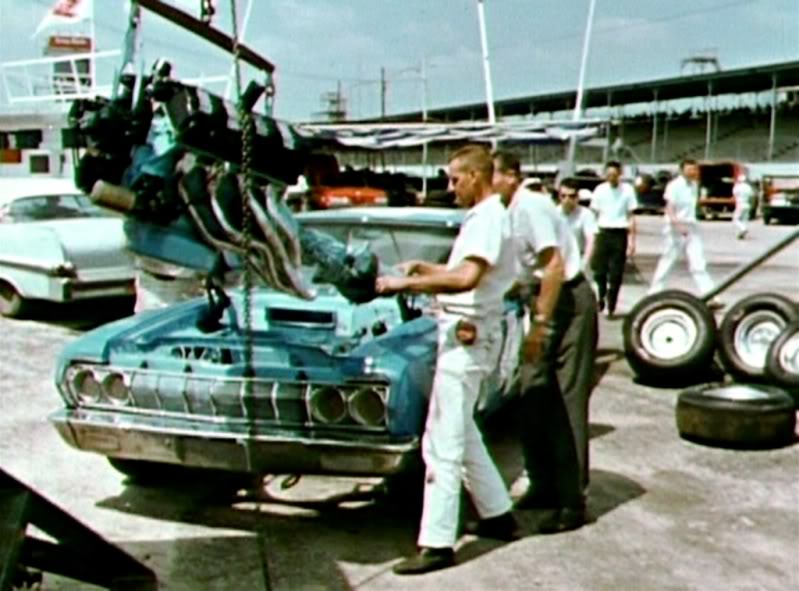 The hemispherical head design was revived in 1964 and were the first engines officially designated Hemi, a name Chrysler would later trademark. The Generation II Chrysler Hemi engines displaced 426 CID (7.0 L). Just 11,000 Hemi engines were ultimately produced for consumer sale due to their relatively high cost to produce, a cost that had to be passed along to the consumer. Intended only as a race engine, Richard Petty debuted the Generation II Hemi at Daytona, where he lapped the entire field on his way to winning the Daytona 500. It’s a clean 1-2-3 sweep for the 426 Hemi at the 1964 Daytona 500.

Though being originally developed for NASCAR competition,  used in 1964 in Petty Enterprises Plymouth Belvedere. Chrysler had not intended to sell the 426 Hemi to the public, and as a result the engine was not allowed to compete in NASCAR for the 1965 season.  While several special drag-specific production cars were manufactured and sold with the 426 Hemi, NASCAR didn’t consider that production sufficient.

In 1965, Bob Summers set the wheel-driven 409.227 mph Land Speed Record in “Goldenrod” using four Hemi engines in tandem, to prove that the Hemi was truly the best engine out there.

So for 1966 Chrysler introduced a slightly de-tuned Hemi for its intermediate range of cars and sold the required number of Hemi engines to return to NASCAR in 1966. The consumer Hemi was the same as the racing Hemi but with lower compression (10.25:1 from 12.5:1) a less aggressive camshaft, with cast iron manifolds instead of fabricated steel tube headers. The 426 Hemi was produced for consumer automobiles from 1965 (early ’66 model year) through 1971. The consumer Hemi version was rated at 425 hp with two four-barrel carburetors.

Mopar has brought back the original 426 Hemi as well as some higher-displacement version of the Generation II engine as part of its crate engine program. 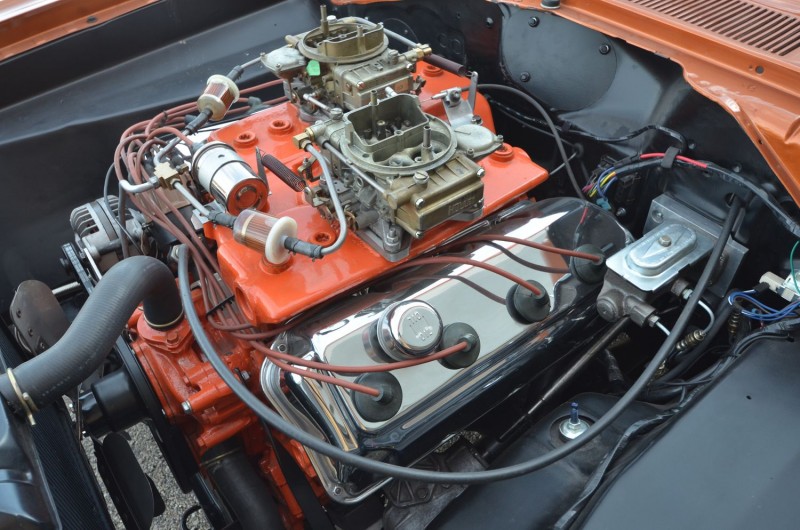 The 426 Hemi also was used in NHRA and AHRA drag racing. Its large casting allowed the engine to be overbored and stroked to displacements unattainable in the other engines of the day.  Engines based on the Generation II design predominate Top Fuel and Funny Car classes.

The street version of the Generation II Hemi engine was used (optionally, in all but the last car) in the following vehicles: 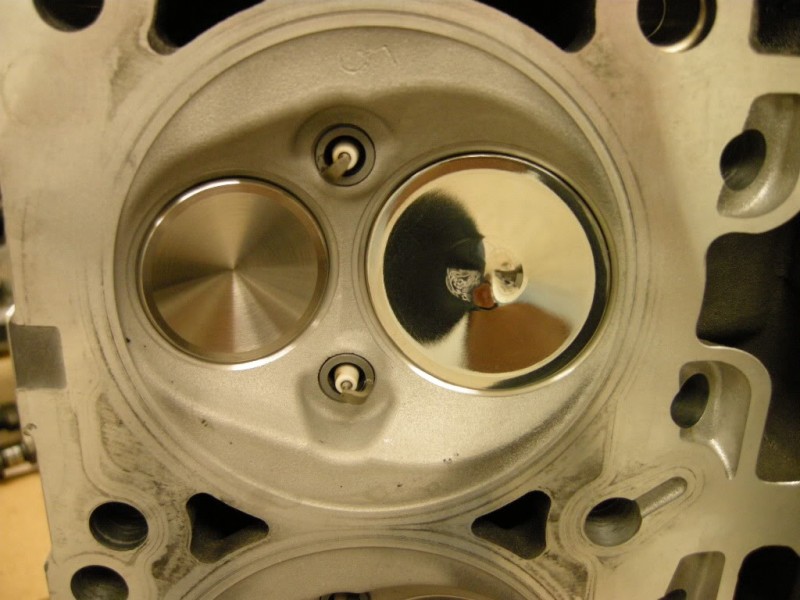 The current-production Generation III Hemi engine heads are no longer truly hemispherical, instead feature a complex than the combustion chamber to maximize power as well as meet stringent emission standards. 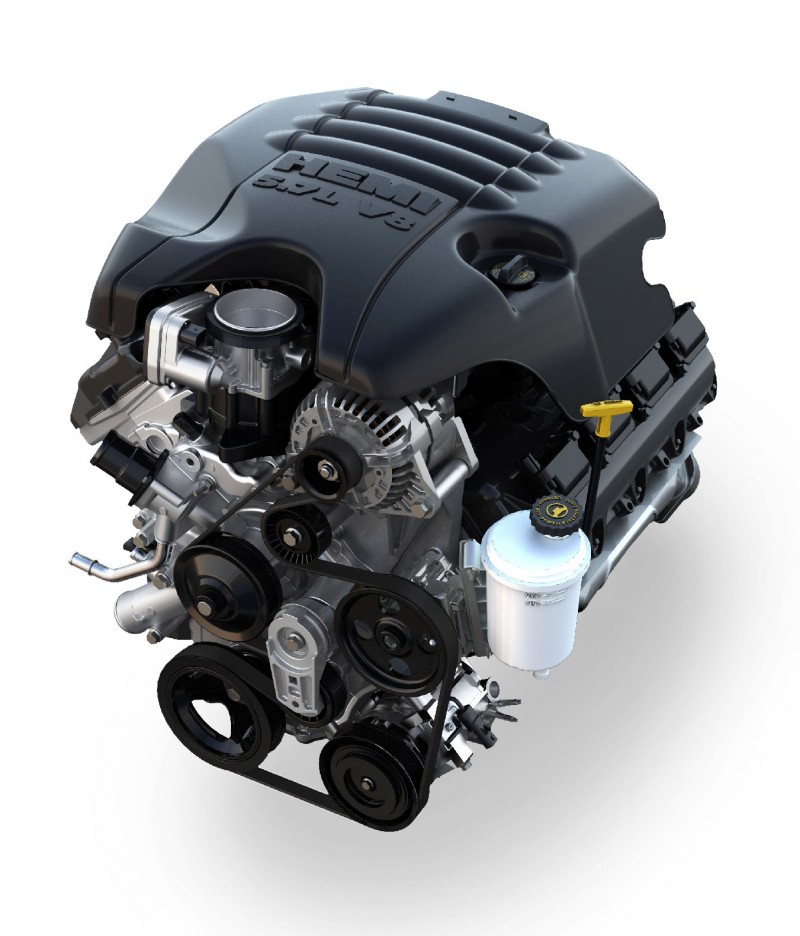 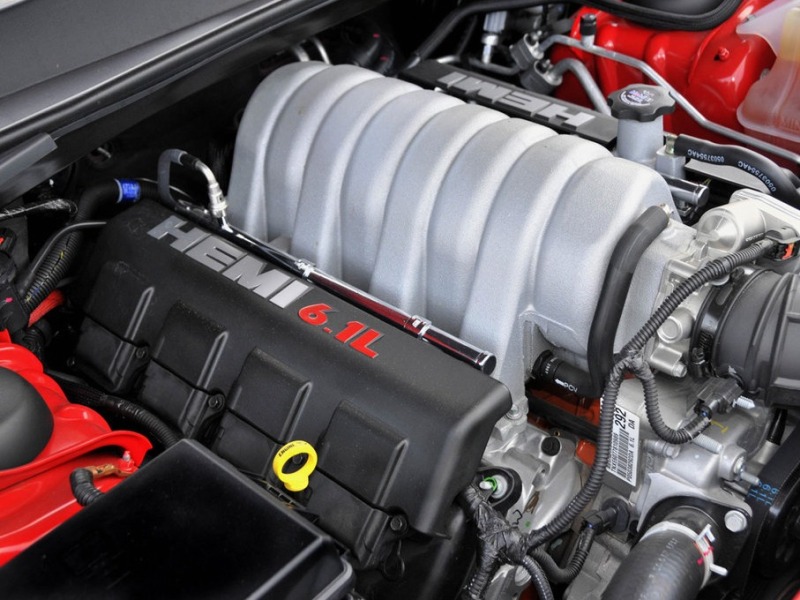 The Generation III Hemi has also been enlarged to  6,059 cc ( 367 CID). The capacity was gained through an increase in the engine’s bore. The engine block is different from the 5.7, with revised coolant channels and oil jets to cool the pistons. A forged crankshaft, lighter pistons, and strengthened connecting rods add durability. A cast aluminum intake manifold is tuned for high-RPM power of  425 hp. 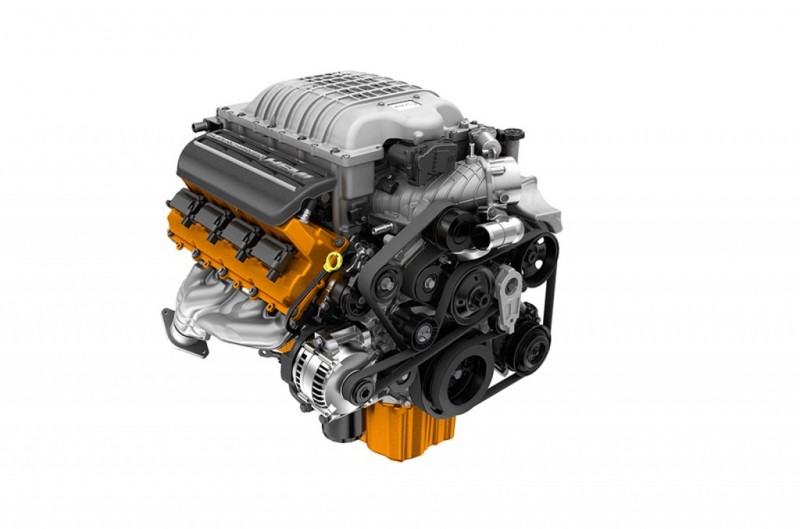 For 2015, Chrysler introduced an all-new high performance supercharged variant of the 6.2 L Hemi engine, called the Hellcat (named after the Grumman F6F Hellcat). The supercharger is a 2,380 cc (145 cu in) twin-screw IHI unit with integrated charge coolers, capable of producing 11.6 psi of boost. This engine is rated at 707 hp  and 650 lb·ft of torque.  This engine is the most powerful automotive engine produced by Chrysler as well as the most powerful engine ever in a muscle car. 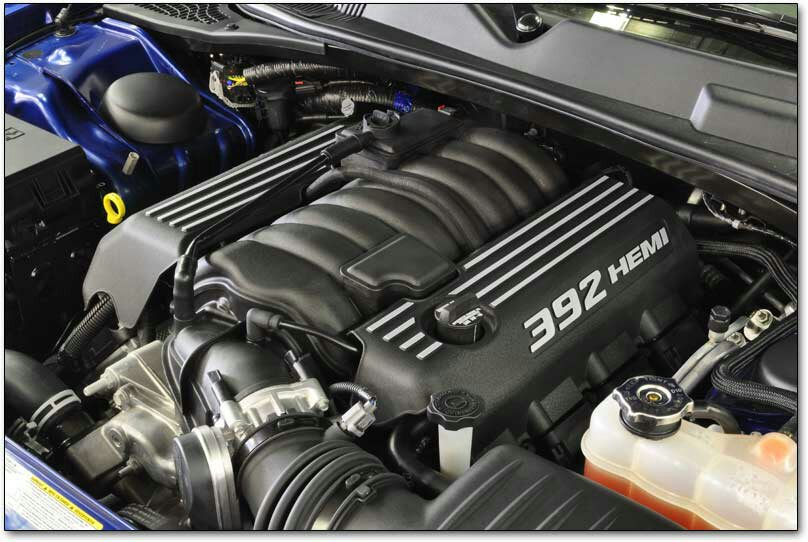 To commemorate the Generation I Hemi that established the engine’s credentials for performance, Chrysler created a modern version  of the 392 (6.4 L) Hemi. It was launched in the 2011 Dodge Challenger SRT8 with variable camshaft timing as well as MDS in cars with automatic transmissions. Added for 2015 was a Scat Pack Shaker hood option, which raised output to 485 hp.

Just so you don’t think you caught me on a technicality, I’ll mention a series of straight six cylinder Hemi-head engines built by Chrysler of Australia. There, that’s all of them.