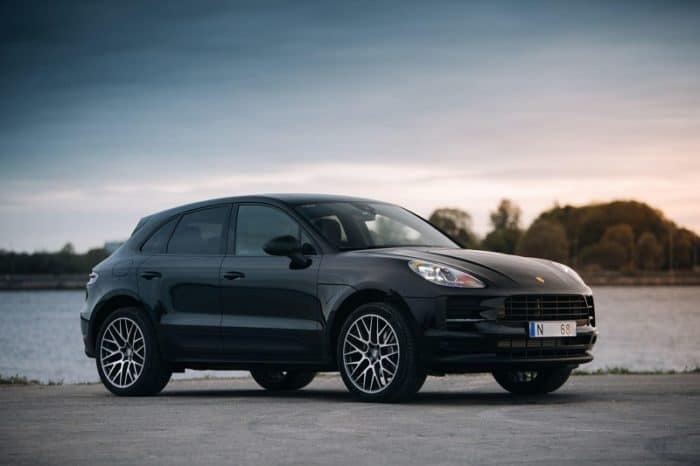 The next few years are going to be very interesting for Porsche. Firstly, any model produced by the German luxury automaker is worthy of commanding headlines, but secondly—and most importantly—the company has stated that they plan to introduce a wider range of exciting electric vehicles. In fact, Porsche’s chairman of the board, Oliver Blume, has publicly announced the company’s ambitious plans to have half of its sales represented by all-electric vehicles by 2025.

It’s an ambitious timeline, but Porsche should be on schedule if all goes to plan. 2020 will see the release of the brand’s first EV, the Taycan EV, which will be followed by the Taycan four-door sedan, and Cross Turismo variant. While the Taycan line is leading the charge, Porsche has plenty more electric vehicles coming our way. But before we talk about what Porsche has tucked away up its sleeve, let’s take a look at how the brand has been performing over the last few years.

Despite falling under the shadow of the Volkswagen Emissions Scandal, Porsche managed to escape relatively unscathed (aside from a recent fine of $599 million dollars) and sales don’t appear to have been affected at all. In fact, 2018 saw an impressive sales improvement of 4% over 2017, with 256,255 units sold. Not bad considering that the brands European sales took a tumble of 4% for the same time period. Luckily, the Chinese market managed to help smooth over the European cracks, since Porsche was able to shift 80,108 vehicles in China alone—an increase of 12% from 2017, making it the luxury car maker’s largest single-country market.

While the European market stalled and the Chinese market gained momentum, things have been fairly steady for the US market, with a total of 57,202 units sold in 2018, which translates as a 3% improvement over 2017’s 55,420 units. Things are going well for the brand despite the Dieselgate scandal.

Interestingly, Porsche also became the first German carmaker to abandon diesel engines altogether. So, the improved sales figures are twice as exciting, since the removal of diesel technology no doubt impacted the brand’s overall sales. The diesel-engine shaped void will need to be filled, and Porsche’s electric ambitions will fill that void. So let’s take a look at what Porsche has on offer for the 2021 model year. If you’re curious about what 2020 Porsche models are on the way, take a look at this link. We’re going one step further into the future to look at the 2021 Porsche range. Here’s what’s on offer:

What To Expect From The 2021 Porsche Line-Up 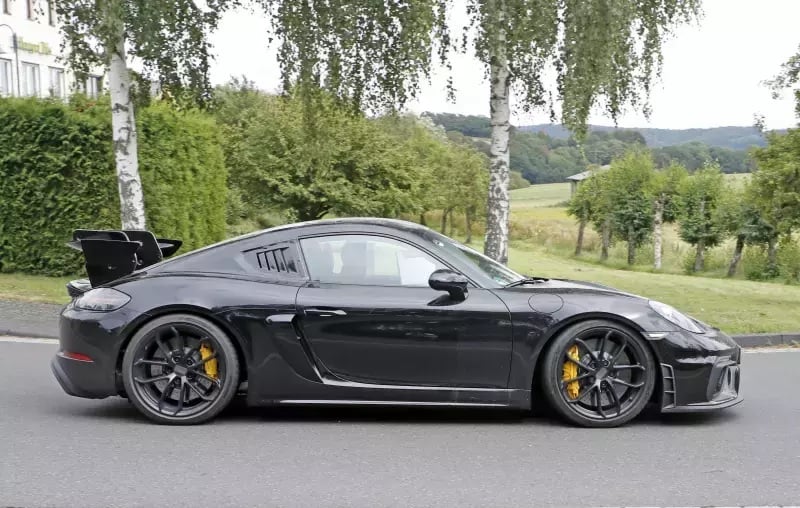 Some sources are saying 2020, but we think it’s more likely to be a 2021 Porsche model. This is the new and upcoming Porsche 718 Cayman GT4 RS, the high-performance version of the Cayman 982 (that’s expected to arrive in 2020). In essence, it’s like the current 718 Cayman GT4 but turned up to eleven, with more aggressive styling, more power, and a higher specification. Porsche doesn’t give out the “RS” name out lightly, and this will be the first modern iteration of the 718 to wear the badge. It has been a long time coming, with rumors of a GT4 RS surfacing almost as soon as the Cayman GT4 first appeared in 2015. Porsche has taken its time with this one, and it looks like it was worth the wait.

Numerous spy shots have caught the GT4 RS out on tests on public roads, but covered in the usual test mule camouflage which hides some of the most important details. Luckily, no amount of camouflage can cover the actual shape of the car, which appears to be more muscular than the usual GT4, with bigger everything. Huge front vents, a giant rear wing, and a sexy shape, the upcoming GT4 RS is going to turn heads. 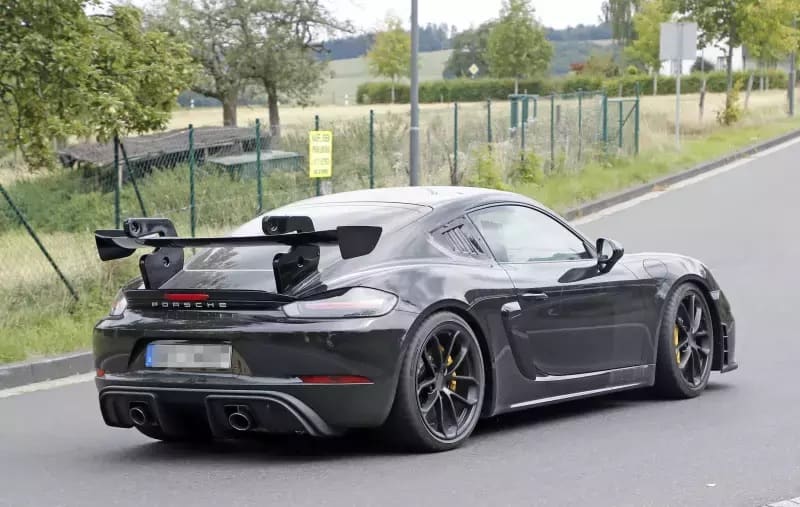 It looks the part, but it also has the performance to match. The 2021 Porsche 718 Cayman GT4 will be powered by the Porsche 911’s 4.0 liter flat-six engine but with some impressive power upgrades. For example, the 2021 GT4 RS is expected to produce approximately 440 horsepower, complete 0 to 60 mph in four seconds, and hit a top speed of 190 mph. To give it even more performance, Porsche will equip the new GT4 RS with race-spec suspension and carbon ceramic disc brakes. 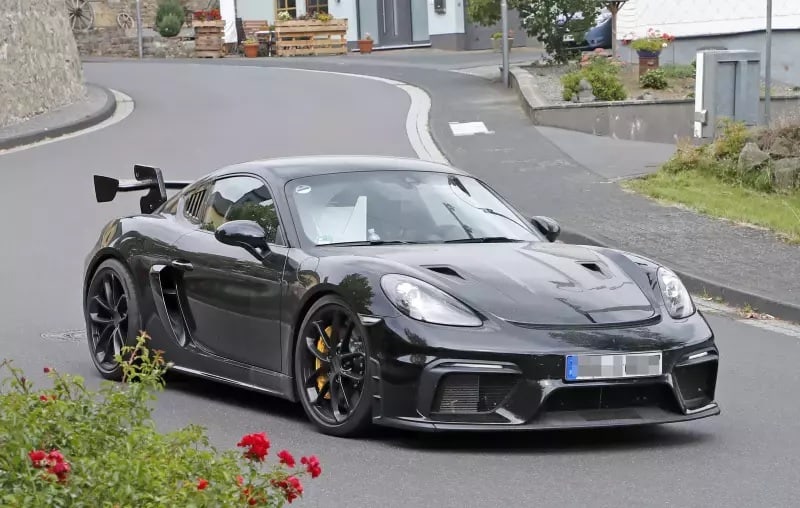 But these kind of things don’t come cheap. If you think the 718 Cayman GT4 RS is going to be affordable, prepare to be sadly mistaken. We estimate that the GT4 RS will retail for around $125,000, making it the most expensive Cayman ever made, and even more expensive than the current Porsche 911 GTS. If our estimates are correct then it will also be more expensive than the Lotus Evora GT430, which has similar specs and a similar attitude, but a price tag of only $90,000. 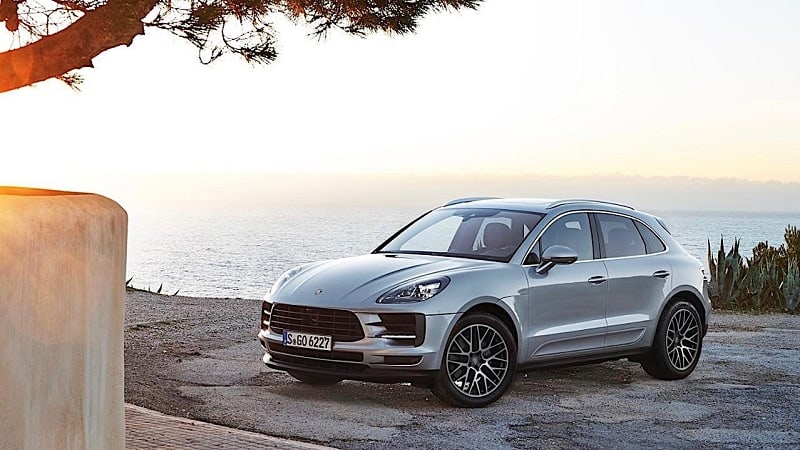 The all-electric Porsche Macan is expected to roll onto dealership floors in 2021, alongside the internal combustion engine version. However, the regular gas model isn’t going to on the shelf for too long, and according to Porsche’s deputy chairman, Lutz Meschke, the gas option will only be sticking around for a “couple of years”—after that, it’ll be electric only. In short, if you want to have a gas-powered Porsche Macan compact SUV, then you’d better act fast, because it will be discontinued in the near future to make way for Porsche’s new electric strategy. Let’s see what the electric Macan is all about then.

So far, we know that the new Macan will be built on top of the Taycan platform, but with some key differences. Porsche’s SUV director dropped a few hints in an interview back in September, explaining that the new Macan will utilize Volkswagen’s Premium Platform Electric (PPE) architecture, which works for a wide range of vehicles.

The main issue for Porsche was to try and improve the Macan’s aerodynamics, since the current model is a little bulky. Thanks to the electric drivetrain and the lack of need for a spacious engine bay, the new Macan will have a lower nose to improve the aerodynamics. The new focus on aerodynamics won’t affect the vehicles usability though. 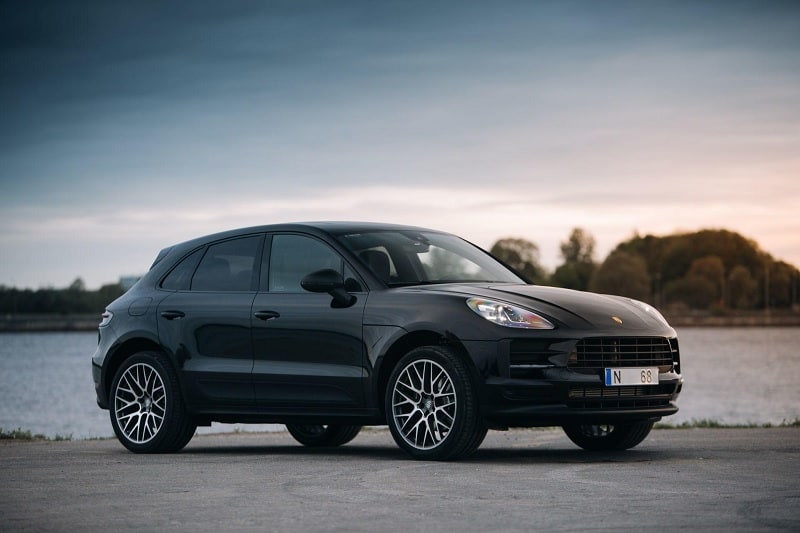 We also know that the Porsche is going to be offering the Macan in a number of flavors, including the Turbo and Turbo S. Curiously, the Turbo part of the name will still remain, despite the lack of any turbo technology on board! The Turbo S is expected to deliver approximately 700 horsepower and 750 lb-ft of torque. It’s going to be a seriously powerful vehicle…but it will come with an appropriate price tag. To make things ever more frustrating, Porsche will likely be releasing the Turbo S and Turbo models first, before the base models.

In terms of the price, well, we’re reluctant to speculate about this one. It won’t be cheap, that’s for sure. It will also have a higher price tag than the usual internal combustion engine equivalent, but just how expensive? It’s too early to tell. However, it’s worth keeping in mind that Porsche’s plans for a more electric-future could drastically change how the company markets itself, and their pricing structure could go one of two possible ways.

The new EV range could be priced lower—despite the higher costs of modern materials, the manufacture of an electric car doesn’t require as much labor as a gasoline vehicle, and Porsche may pass some of those savings on to customers.

Or, the luxury brand could become even more exclusive, targeting ultra-high-end customers only, increasing their prices accordingly. That’s probably the safer bet. However, it could be none of those options. We will just have to wait and see. 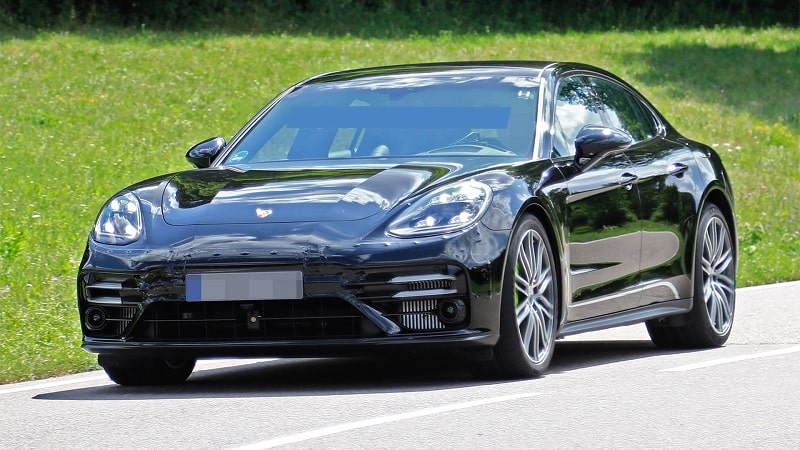 Spy shots of the upcoming 2021 Porsche Panamera sedan have emerged, and to the untrained eye there isn’t much to speak of. Since the Panamera is about midway through its life cycle, a bit of a refresh wouldn’t go amiss, but on the surface it seems like nothing amazing is going to happen to the car. But if you look closely, you’ll see that there’s more to the new Panamera than meets the eye. 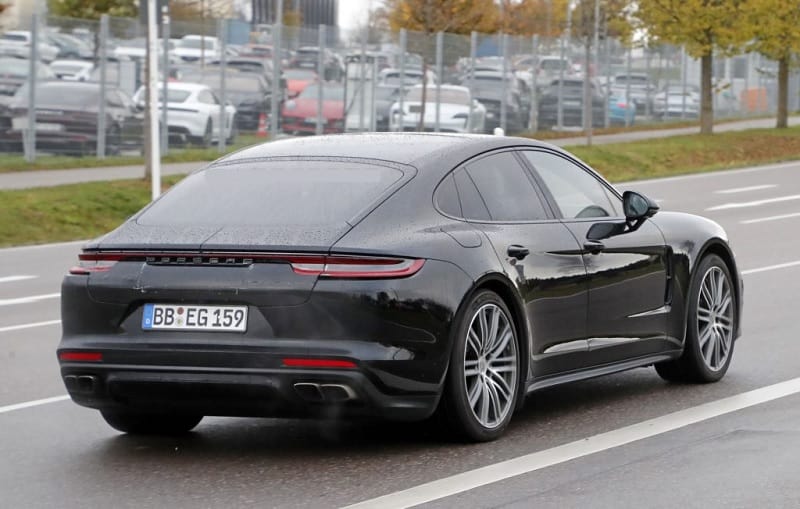 The front end is disguised with stickers, so any new updates are literally kept under wraps for the time being. However, there’s other stuff to look out for. The wheels have a few interesting details, from the rim design, right up to the green brake system which is a clue that this Panamera is likely the Turbo S E-Hybrid. Similarly, the exhaust tips on the rear shots also lead us to believe that we’re looking at the top flight model. A spy shot of the interior also shows off a steering wheel that’s Turbo S E-Hybrid in design.

Unfortunately, details are very thin on the ground at the moment. We’re expecting to see a formal unveiling at the 2020 Geneva Motor Show, which is only a few months away. 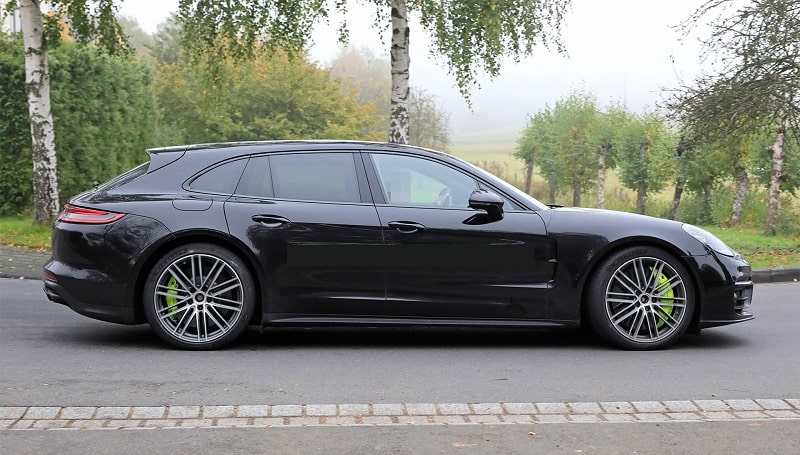 While we’re on the Panamera topic, other spy shots have snapped the more practical Panamera out on tests: the 2021 Porsche Panamera Sport Turismo. The models in question are only prototypes and don’t reflect what the final production model will look like, but they give a good indication of what to expect.

For a start, you can see new front and rear fascias. There’s also redesigned taillights, with a new center strip between the clusters, which will probably end up looking similar to the design of the Macan and Cayenne’s rear ends. Different graphics are also to be expected, an improved rear bumper design, a front bumper that looks more derivative of the 992, and minor changes not dissimilar to those found in the regular Panamera mentioned above. 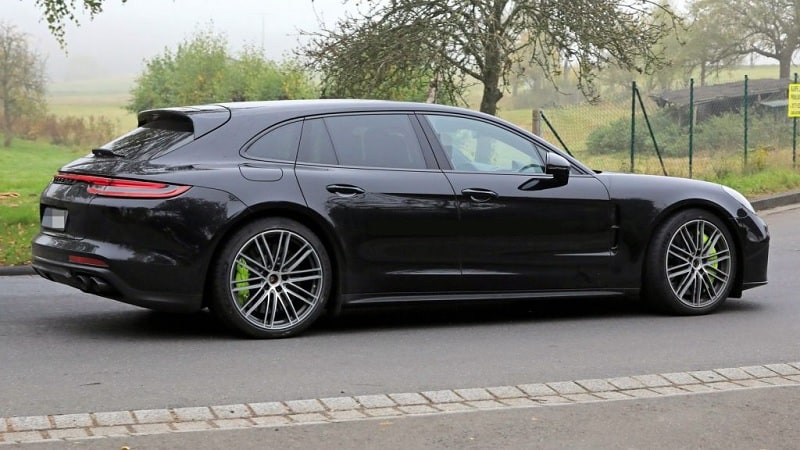 Apart from that, everything else looks almost exactly the same as the outgoing version, but it’s what we can’t see that interests us most. We expect the interior to come with a refreshed interior look, with improved instrumentation, new upholstery, and an upgraded infotainment system. And of course, there’s the engine and performance to speculate on. A power increase should be on the cards, but how and in what form, we don’t know.

The current range includes a number of potent engine options, including the base model’s 3.0 liter turbo V6 that makes 330 horsepower, a 454 horsepower 2.9 liter V6 with hybrid technology, up to the 4.0 liter twin-turbo V8 E-Hybrid option that makes 680 horsepower. What will 2021 bring to the table? It’s too early to say.

What Else Can We Expect?

Naturally, there are other models we’re expecting to see appear in 2021. No doubt there will be an entire new fleet of Porsche 911 models and variations for every kind of Porsche fan out there, in Coupe, cabrio, turbo, and GTS trims. And of course, as Porsche’s 2025 electric vehicle deadline draws closer, we’ll be seeing even more electric models of our long standing favorites and a few entirely new models make an appearance too. But we will have to wait and see what Porsche’s designers will come up with next.


SS Tuning Shows Us What the 2016 Ford Focus ST Sedan Should ...
2021 Bentley Bentayga Hybrid: 443 HP Ultra-Luxury SUV With G...
The Mazda BT-50 Is Redesigned But US Customers Will Not Get ...
Top 10 Longest Lasting Cars
The Best From Ferrari in 2020
10 Examples Of a Replicar Being as Good as the Original