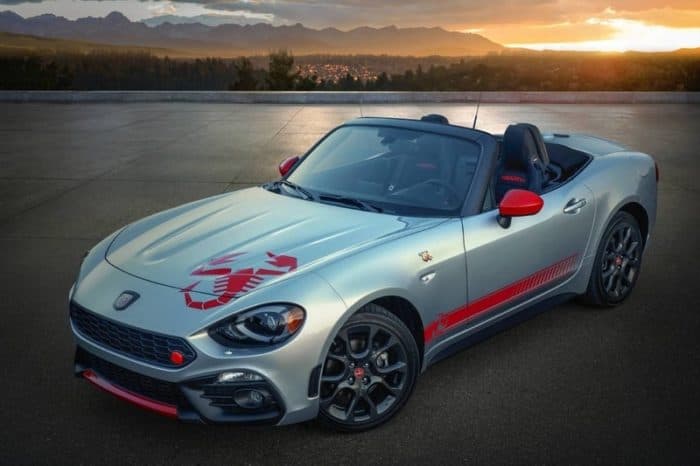 Fiat is experiencing plummeting sales across the globe after the popular Italian family brand had failed to implement a successful crossover-based lineup and instead continued to rely on more conventional passenger cars. Not only did they fail to reorganize their lineup in terms of body style popularity, but they haven’t exactly offered anything meaningful in terms of alternative fuel source-powered vehicles either. Consequences of Fiat’s actions (or inaction in this instance) will be felt for years to come and the 2021 Fiat lineup is bound to suffer alongside their models from both the previous years and years that’ll follow.

Fiat’s global sales fell by 9.8 percent between 2017 and 2018 but this wasn’t the start of their woes. Between 2010 and now, Fiat’s sales had dropped by almost 30 percent despite the fact that the global light vehicle market actually grew by more than 20 percent during the same period. In 2018, one of two FCA namesake brands has managed to market around 1.5 million vehicles worldwide which is nowhere near their best results from years past.

The U.S. market was never one of Fiat’s strong points but 0.09 percent market share and only 15,521 vehicles sold in 2018 is beyond embarrassing. For comparison, Fiat has delivered 26,492 units just a year before, while their best post-return result was achieved in 2014 when they had marketed 46,121 light vehicles.

Fiat’s strategy going forward has long been shrouded in mystery. Inability or downright unwillingness to adapt to market demands could have been understood in a number of ways, but now that we know that FCA and PSA are merging together, it was probably just due to unwillingness to invest billions of dollars into research and development that they wouldn’t even need. In other words, the FCA brass had been working on merger for years and they’ve finally got it with the French company that has Peugeot, Citroen, Opel, and Vauxhall under its umbrella. The newfound group will instantly become the fourth-largest global carmaker behind Toyota, Volkswagen, and Renault-Nissan-Mitsubishi alliance, effectively overtaking both the GM and Ford in the process.

Sharing investments and vehicle platforms (read utilizing the PSA technology where necessary) will save FCA $4.1 billion, hence their decision to let the Fiat, Dodge, and Chrysler brands wither on the vine can be understood if not condoned.

Let’s now get back to the Fiat brand itself and take what might be the last look at their current lineup. Although Fiat’s inactivity on the U.S. market might lead you to a false conclusion that they’re doing absolutely nothing in revitalizing their lineup, Fiat is actually working on a number of new or redesigned models like the New Punto or Tipo compacts. However, these are all overseas models and Fiat won’t be lifting a finger when it comes to the U.S. market. They’ve only discontinued the petite Fiat 500 after model year 2019 but no new arrivals have been confirmed thus far.

Although Fiat has managed to move only 3,515 of its compact roadsters, the 124 Spider is arguably the most exciting Fiat vehicle available on the U.S. market and that itself speaks volumes about the Italian automaker’s position. A sports car with no real future in the lineup shouldn’t be more than a niche vehicle, yet it accounts for one fifth of company’s total U.S. sales. Moving into MY 2021, the compact will most likely be gone, but leftover stock should provide an opportunity to buy one even after it’s officially gone.

Considering the Italians have decided to ax their only vehicle worth the mention, the 124 Spider won’t be receiving any additional updates. The unlikely Mazda Miata stablemate (yes, the 124 is built alongside Miata, in Japan) is both the most exciting and most stylish Fiat car money can buy right now. This, however, isn’t big of a deal considering the remainder of Fiat lineup consists of couple of 500 models (and not the good ones at that).

A bit on the spartan side, the 2-door sports car doesn’t offer any luxuries despite the fact the entry-level Classica models start from just under $27,000. Opt for the mid-range Lusso which costs $29,500, and you’ll get automatic climate control and heated seats. Finally, the range-topping $31,000 Abarth grade provides more of a performance boost (although insignificant one) than any additional equipment.

The 124 Spider shares its infotainment system with the Miata, but doesn’t offer Android Auto or Apple CarPlay integration. Rear parking sensors, rear cross-traffic alerts, and blind-spot monitors are available at extra cost, however.

Engine, on the other hand, isn’t shared with the famous Japanese sports car. Instead, the 124 Spider gets a 1.4L turbocharged 4-cylinder mill that’s good enough for 160 horsepower in most cases. The mentioned Abarth performance model gains additional 4 ponies. Standard transmission is manual but a corresponding 6-speed automatic is also available.

The Fiat 124’s strongest suit is, naturally, its handling. The quirky compact sports car is a joy to drive, and in some instances (mainly relaxed cruises on curvy roads), actually does a better job than its role model. The MX-5 will still beat it on track, but it’s good to know that Fiat’s take on the small sports car segment knows how to hold its own when necessary.

Sadly, as mentioned above, we probably won’t be able to enjoy its splendors for long as Fiat is slowly but steadily phasing out its less profitable models (as if any of their vehicles actually is profitable in the U.S.). 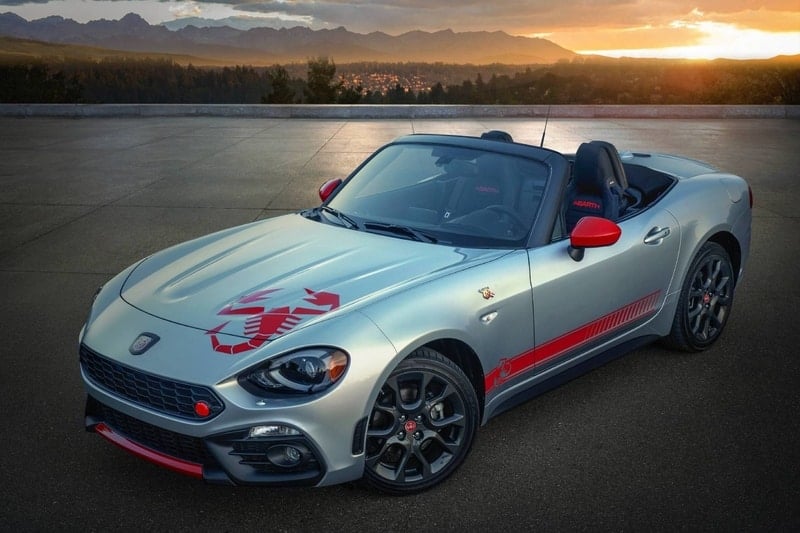 With 5,223 units marketed in the U.S. throughout 2018, the 500X serves as company’s current best-seller (not counting the recently discontinued Fiat 500 whose sales stopped at 5,370). The subcompact is currently the only crossover in the Fiat lineup and that won’t change anytime soon. It’s also arguably the best vehicle the Italians field at the moment – at least from practicality’s perspective – although that doesn’t say much in a lineup as shallow as Fiat’s.

Plenty of Italian flair can be found all over the 500X, but despite sporting a distinctive oddball design, the subcompact fails to provide much else. Being on a small side, the 500X is cramped at the back and doesn’t exactly provide class-leading storage capacity figures. Much like its platform-sharing sibling Jeep Renegade. However, where we can justify Renegade’s price, it’s hard to do the same with the Fiat crossover. Starting from $26,000, the subcompact is rather expensive from the get-go, and $31,000 Trekking Plus trim doesn’t do it any favors either. Especially considering it encroaches on compact crossover territory.

Furthermore, the base models don’t offer any sort of advanced driving aids. At least not as standard. An optional Advanced Driver Assistance Group package will provide automated emergency braking, blind-spot monitoring with rear cross-traffic alerts, lane-keeping assist, and adaptive cruise control. At least a 7-inch touchscreen display does its job admirably, and both the Apple CarPlay and Android Auto smartphone integration are standard across the range.

Every single Fiat 500X comes with a 1.3L turbocharged 4-cylinder engine which cranks up a healthy 177 horsepower and 210 pound-feet of torque. A contemporary 9-speed automatic gearbox is standard, and so is all-wheel drive. Although commendable, discontinued front-wheel drive models were more efficient and will be missed. Speaking of which, the Fiat 500X now returns up to 24 mpg in the city and 30 mpg on the highway.

The subcompact crossover might offer a captivating styling and a powerful contemporary engine, but it fails at doing pretty much everything else. Its competitors are better executed all over, and provide better value for money. Not to mention their superior predicted reliability ratings. 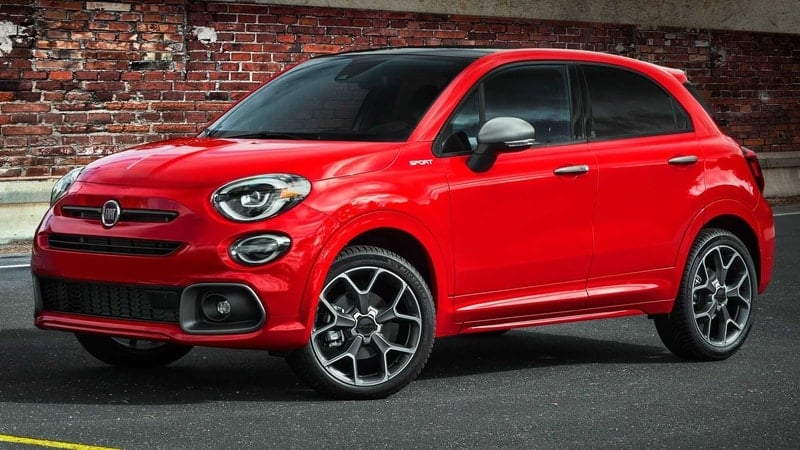 Fiat hasn’t really updated the 500L MPV in a while, and has instead let it die on the vine. Although it only arrived stateside for MY 2014, the 500L is couple of years older than that. Needless to say, that’s bordering on senior citizenship in compact car’s years. Sales are down to 1,413 in 2018 which is roughly ten times lower than 500L’s score from 2014. Considering all of the above mentioned, this doesn’t really come as a surprise.

The Fiat 500L’s woes, however, only start from there. The awkward-looking hatchback isn’t as balanced-out as its 500X counterpart but design is the least of its worries. Poor handling, and sub-par quality are among its biggest downsides. Furthermore, only great outward visibility and spacious interior pass as its advantages in our book.

Quality of used materials is also sub-par – even for Fiat. This probably shouldn’t come as a surprise as the compact is actually assembled in a retooled former Yugo factory. If abundance of space and sub-par interior materials somehow cancel each other out, there’s nothing to do so for an apparent lack of advanced safety features. The $23,000 entry-level Pop models don’t offer much in a way of features at all, and even the range-topping $26,000 Lounge models only add standard rear parking sensors. That’s all as more advanced driver’s aids are nowhere to be seen; even at extra cost.

Another major issue is the 500L’s uninspiring powertrain. A 1.4L turbocharged 4-cylinder might not provide more than 160 horsepower, but it has turbo lag in spades. Even worse, it’s paired with a 6-speed automatic transmission that’s slow to downshift. Unlike the 500X which comes with mandatory all-wheel drive, the 500L can only be ordered in front-wheel drive configuration.

The aging, not particularly well-executed, and poor in terms of available features compact hatchback MPV is one of FCA’s weakest links and one of the least inspiring cars money can buy here in the U.S. It’s safe to assume that it’s not long for this world but the fact it’s already survived for longer than it should have is worrying. Apparently, Fiat has other plans for the future but isn’t ready yet to implement them, hence the old models are forced to continue soldiering on for unforeseeable time. 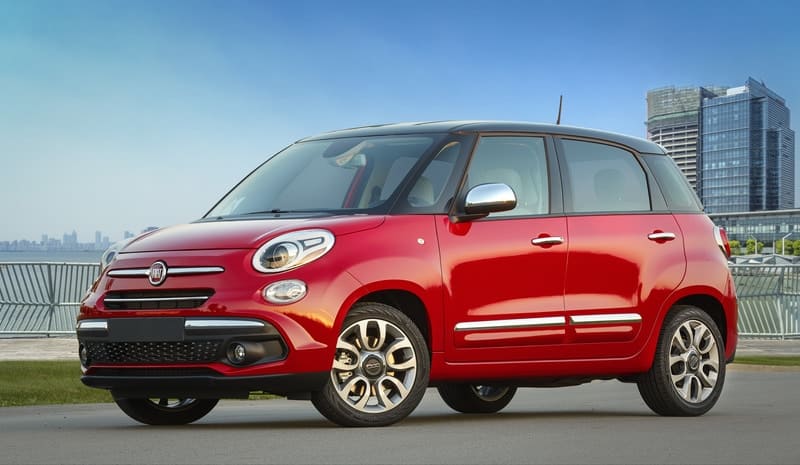 
The Top 60 Seldom-Seen Rare Cars in the World
You Want A Raptor, But The 2021 Ford F-150 Tremor Is The Off...
The Best From Dodge in 2020
Toyota Beefs Up Battery-Car Plans, But Still Lags Behind Key...
Dodge Challenger Liberty Walk Conversion In Black
25 Cool Cars Turned Into Even Cooler Limos