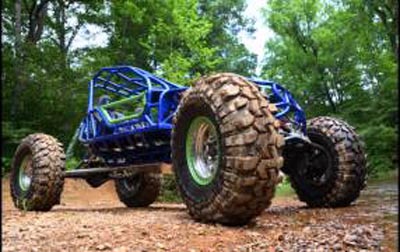 Here’s a question for you. Do you know what a Rock Bouncer is? It sounds like a term that’s throw around during a rock concert or something right? Well, apparently there are a set, or type of vehicle that have been given that name, and for good cause. We’re going to explain what, why, and how the name applies to this vehicle of sorts. 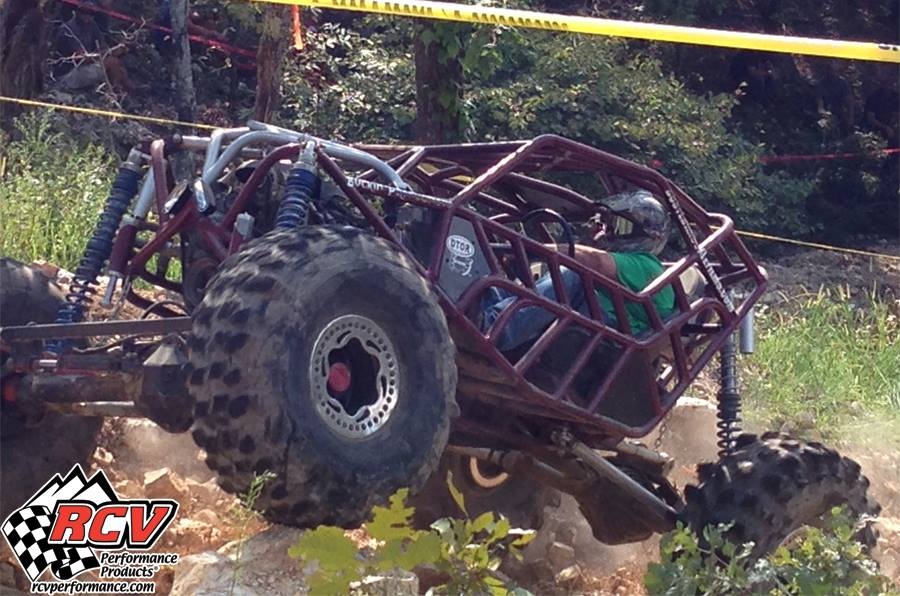 So, the term Rock Bouncer is nothing more than two words that basically explain an action that takes place while a very capable vehicle is moving about the place in any given direction. Still sounds a little on the scientific side of things? OK, here it is. A Rock Bouncer is a Rock Crawler that has been custom built to do what a Rock Crawler does, but in a much more aggressive manner. Now does it make sense? I thought so. OK, now that we got the, “How” out of the way, now we can focus on the, “What” portion of the story.

Let’s examine what goes into creating a Rock Bouncer. For those of you who really don’t know much about this, “Sport” you should really pay attention to this part. A Bouncer is a custom made 4 Wheel Drive monster that can virtually do just about anything the driver wills it to do. It can climb near vertical walls, pull itself over boulders the size of Fiats, and even survive massive rollovers, just to keep clawing it’s way to the top of the hill. Your typical Bouncer is made of hardened steel bars that have been mandril bent to very specific, and exact angles for the sole purpose of providing strength, rigidity, internal parts protection, looks, and above all driver safety. Each Rock Bouncer, or Buggy if you will, is not the same. Each driver has a buggy that suits him, or her. Some drivers prefer a longer buggy that lowers the center of gravity a touch, and others like a shorter wheel base that allows for awesome maneuverability in tight places. No matter how you slice it, a driver’s buggy is their own pride, and joy. The only real thing that could separate a driver from their buggy is either a really destructive crash, or enough money to make a better one.

As you can see by the video posted above, many of the Rock Bouncers tend to be powered by GM crate motors, and then those are mated to custom transmissions, and transfer cases. These three items are what make the buggy move from point A, to point B. Power for these unyielding brutes seem to float anywhere between 500 to 750Hp, and the torque numbers are just as ridiculous. All of that power is sent to the ground via a die hard, bulletproof 4 Wheel Drive system. In these cases, technology doesn’t mean much here. A lot of these drivers build their buggies out of old military truck parts, and such. I mean you could find a Dana 60 axle off of a 1970’s Ford pick-up, and then that same piece of equipment would be over built in order to retain the strength it needs to survive 20 or so runs on the rocks. The last two main components of a successful Rock Bouncer are, suspension, and tires. Most of these guys run a single spring coil over with a piggy back reservoir set up, and this allows their rig to soak up any hit the hillside can dish out. Lastly, the tries. Tire choice is imperative in order to have a moderately successful buggy. Tire size varies, and in this case, “Mine’s is bigger than yours” doesn’t always make it work. 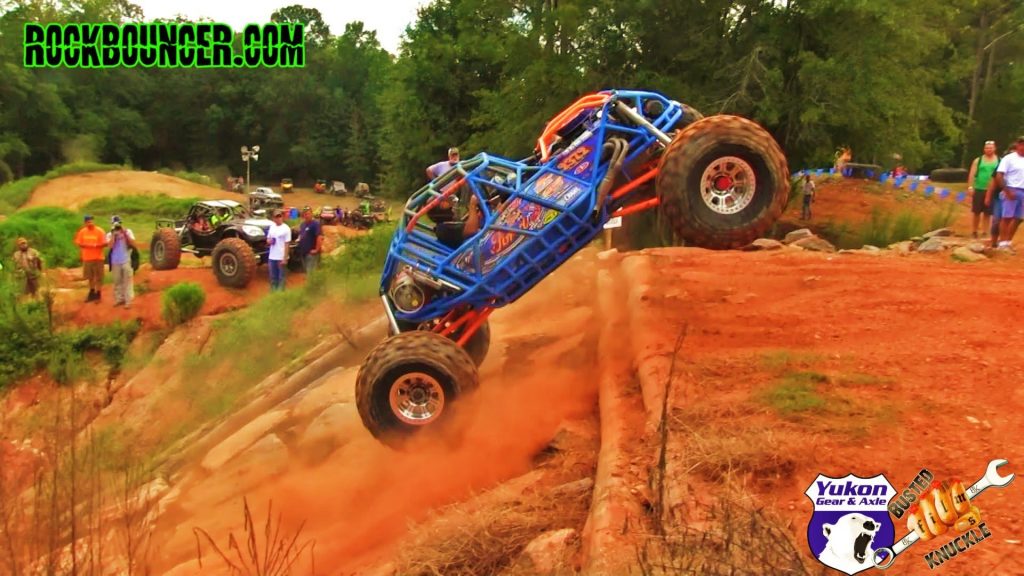 Here’s where we explain the, “Why” factor. In this world wide sport of sorts, you have two main sets of drivers who participate. You have the Rock Crawlers, and the Rock Bouncers. The Crawlers sort of represent the, “Slow & Steady Wins The Race” mantra, and the Bouncers, are the complete opposite of the same spectrum. Bouncers have been chalked up to back woods rednecks that have some how managed to figure out the mechanics of life work, and then got lucky enough to make something that everyone else can enjoy while guzzling down a beer. It’s so much more than folks. I don’t personally know any of the drivers, but in watching them in interviews, and seeing how they drive, their skill levels are equally matched, if not higher than the crawlers. If you think about it for a minute, a Bouncer may seem a lot more brash, and brutal in his methods, but in retrospect, he, or she does what a Crawler does , but in much more intense rate of speed. Of course there’s more tire smoke, and flying dirt, and the occasional love seat sized boulder that may roll down a hill, but that’s what makes it interesting. 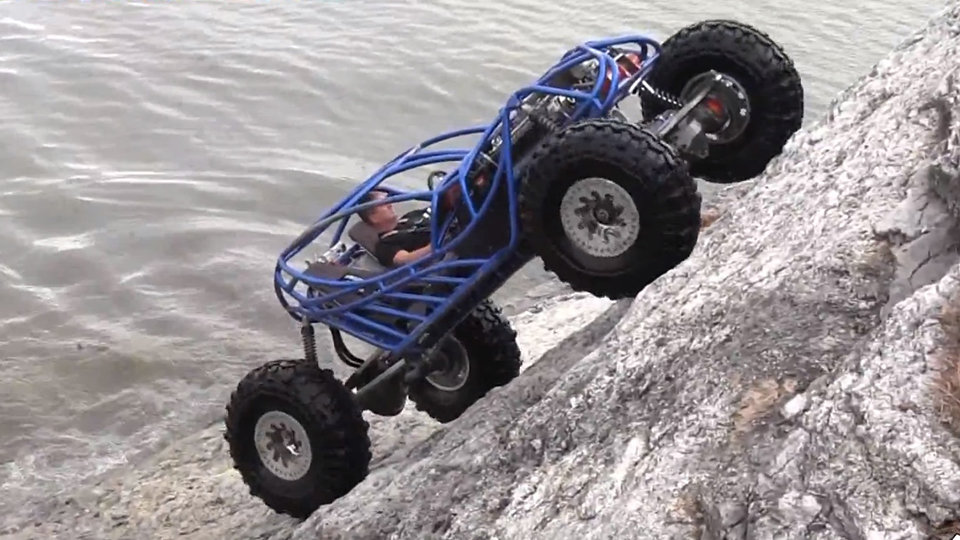 Watching these mechanical animals fling themselves to the mercy of an un-moving section of Mother Earthis something to behold every single time it happens. In some cases the buggy wins, and in others, Mother Earth slaps the taste out of your mouth, and allows you to live to tell the tale. I personally believe there’s a lot more give, and take in Bouncing, than there is in Crawling. As much as the pedal is mashed down to the floor of the buggy in a Bouncer’s event, the driver has to be thinking ten times as fast as a Crawler, just on the premise that anything can, or will happen in a split second.

I think both disciplines take more than just heart, and guts. There’s a love for everything that’s awesome about a short headered motor that’s spitting out flames of discontent, because the tires aren’t doing the job that the engine is asking them to do. The adrenaline rush you get when you see dirt flying through the air as the driver, literally uses his ass to feel his way to the top of the mountain side. And lastly, the camaraderie that is had when a fellow driver rolls over, and the spectators spring into action along side the event staff, making sure that the driver will drive again before the sun goes down. This is why a Rock Bouncer is so Bad Ass. All of this is why I think, I feel, that a Rock Bouncer has just that much more fun than a Crawler would.

I hope that this explains things, and enlightens you all to look into a sport that has been otherwise shunned off of television. Rock Crawlers are rigs that are built to drive in a sanctioned event where everything is heavily monitored. The crowds are too far away, the power of the buggy can only be felt by the driver, and a crane is in charge of righting rollovers. Gimme a back woods, Good ‘Ol Boys, Beer Drinking, Muddy, Dirt Flinging, Rock Bouncer event any day of the week. I’m down.