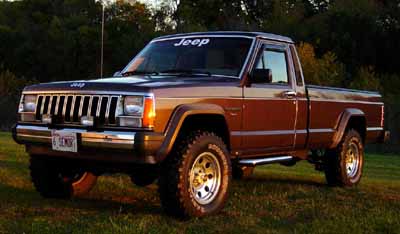 The Jeep automobile company has become very popular ever since its standard militarized version served its heroic purpose throughout the majority of the entire 21st Century conflicts. In fact, ever since the Jeep went into civilian commercialization, this automobile brand has assumed a wide array of four-wheel designs. Despite the Jeeps non-militarized transition, it still retains most of its standard characteristics. All Jeep models are still tough, durable in various unconventional terrains and resilient to its surrounding earthly elements. What makes the Jeep so successful is the fact that its “combative” basic features are successfully translated into its non-combative commercial models.

However, not all Jeep models have ended up a success story. Some models only lasted for a very short duration. One perfect example of the Jeep’s roughest marketing ride is the Jeep Comanche. There are certain reasons why the Jeep Comanche did not live up to the trademark’s known durable reputation.

What is a Jeep Comanche?

The Jeep Comanche is the brand’s very own popular pick-up truck model. Around the 1980s, there was a growing feverish mania over pick-up trucks. In fact, many people find pick-up trucks more practical than conventional four-wheel automobiles. It is not surprising for the Jeep trademark to tap into this incredible market demand. The Jeep Comanche was introduced into the market around 1985 as a competitive contender against extremely popular Japanese cars entering the American society.

Initially, the Jeep Comanche was a great success. Many patrons got hooked with its practical structure. Although it is a two-seater automobile (the driver’s seat), the fairly spacious cargo box makes up for the limited passenger capacity whenever there is no heavy payload in tow. In fact, even if there are stuffs loaded into the cargo box, there are still enough seats for rough passengers who do not mind the risk of sitting on the ledges. The Jeep Comanche lives up to the expectations of pick-up truck fans occupying the working class strata of society. It is versatile enough to serve the blue collar workplace and rowdy social circle. The Jeep Comanche even ended up as a typical thematic flagship for redneck people. After all, its overall appearance is modeled after the 1971 AMC Cowboy pick-up truck. Eventually, the Jeep Comanche ceased production around 1992. This trademark only lasted a measly seven years of existence.

What went wrong with the Jeep Comanche?

It is interesting to note that the main reason for the permanent halt of producing Jeep Comanche models has almost nothing to do with its performance. What frustrates many of its admirers is the fact that this sojourn is determined by corporate verdict. There is a conflict of interest between Chrysler’s Jeep and Dodge. The two subsidiaries inevitably ended up competing with one another when it comes to pick-up truck production. The Chrysler heads decided to give way for the Dodge automobile brand in terms of producing pick-up trucks. The accurate sales record of Jeep Comanche did not provide a solid means of persuasion to persevere.

To compare the Comanche to the current Jeep lineup you can easily view each of the 2013 and 2014 Jeep models at DodeHQ.com of Utah. Or you can simply visit your nearest Jeep dealership for all the information on each of the newer Jeep models.


Camaro has a Monster V12 Under the Hood
Land Rover Helps Those Who Help Us: Defender Above & Beyond ...
The 8 Fastest And 20 Best Sounding 4 Cylinder Cars In The Wo...
Seven Fabulous El Camino Resto Mods
2021 Acura TLX: The Return of the Type S Luxury Sports Sedan
Hyperion XP-1: America's Next Supercar is Hydrogen Powered