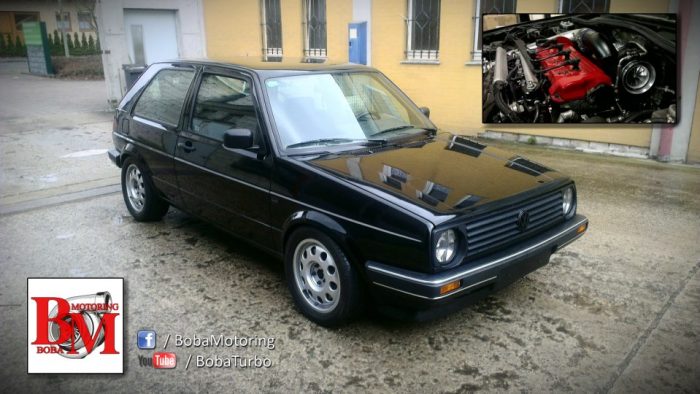 Let’s talk tuning for a minute, or two. When it comes down to the world of tuning, there has to be at least a few thousand different tuning groups scattered about the place. I mean you have low end tuners who work out of a friends garage with a small Honda generator, a pretty well used TIG welder, and some parts from the local junkyard. Then you move up to the Big Leagues where you have guys like John Hennessy who do whatever it takes to let the world know that, what they put out on the roads is completely, and undeniably Bad Ass. But we’re here to talk about one decent sized tuning shop that’s making mountains out of mole hills, and dropping jaws every time one of their cars hits the drag strip. Our profile tuning shop is Boba Motoring. 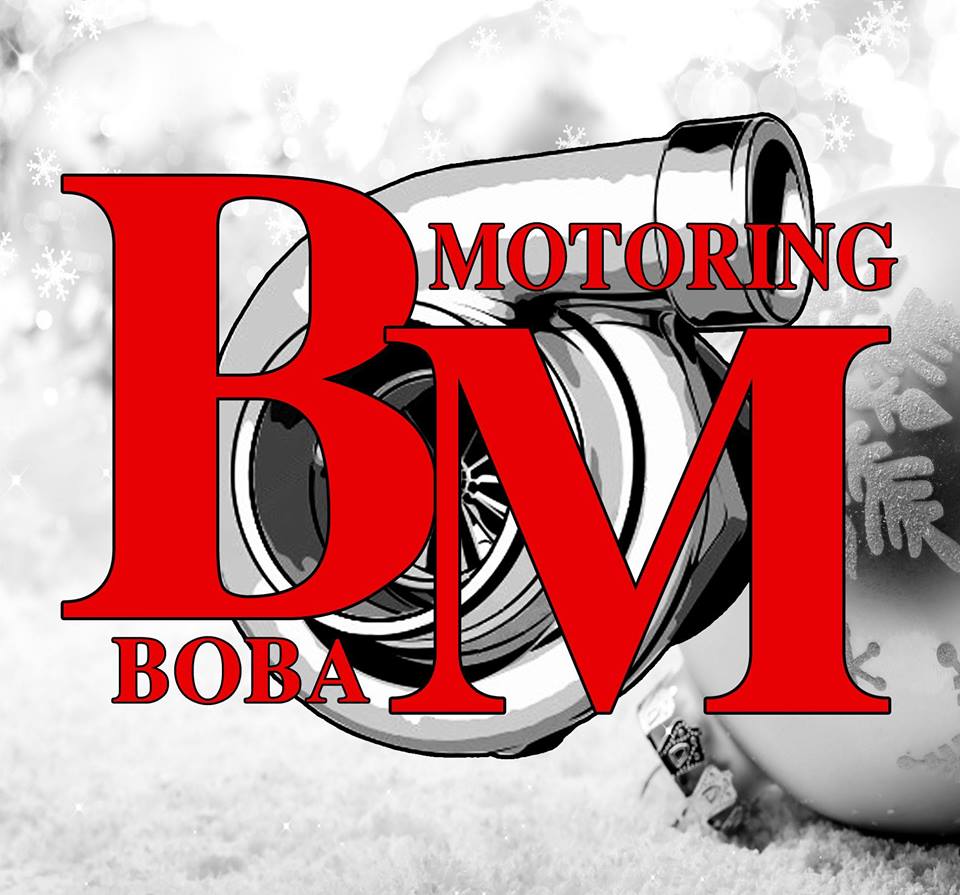 Boba Motoring is a tuning shop based in Paderborn, Germany, and for the most part they seemed to have kept their name, and what they do to themselves. Now, let’s be clear for a moment, there are plenty of tuning shops in Germany as it is, and they all stake their claim to fame, but these guys let their cars speak for them. The cars, if you will, are not some uber expensive Audi, or Porsche, or even BMW. These guys seem to love to keep it old school, and in doing so they employed one of Volkswagen‘s greatest cars, the Mk2 Golf. Yes my friends, I said it, M-k-2. For those of you who know VW’s, the MK2 model ran from about 1985 to around 1992, so it’s safe to say why they went this particular model. ……?? The savings in weight people. The Mk2 Golf is one of the last light weight Golfs to be made. When the Mk3’s hit the ground, you had tons of added weight from substructures, to sound deadening, to extra metal for strength. Now don’t get me wrong, the Mk3 Golf GTi is a bad ass little compact, but what these guys have pulled off with these Mk2’s will have you shuddering with fear. 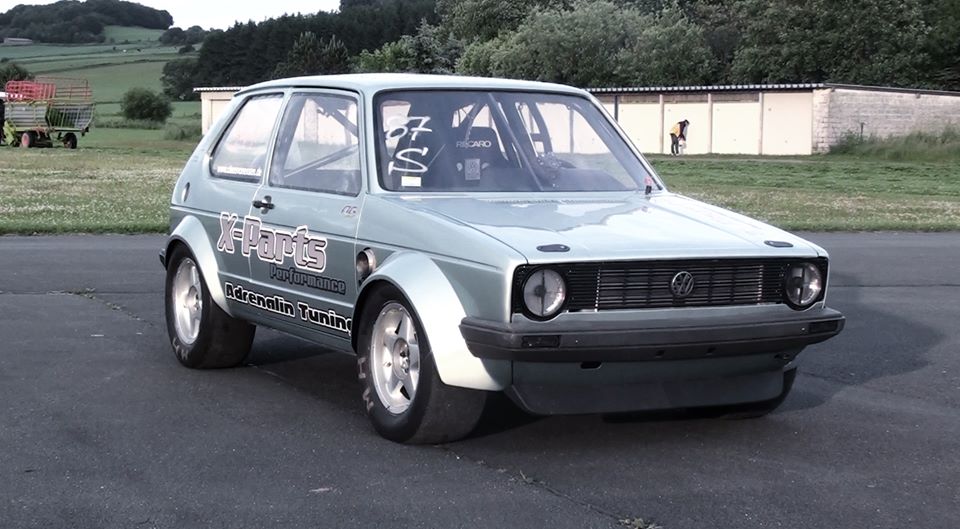 The Boba Motoring team starts a build with an Mk2 Golf, and then completely reworks the engine, and trans. I can only guess that you’re waiting for me to say something about, stripping out the interior, or ditching the head liner or A/C unit. Nope, a few of their racers have full on interiors, and they love it that way. So much so, that when they post videos, you will see the Go-Pro pointed at the original analog speedometer, as it winds around trying to keep up with the tires. Anyway, the 2.0L, 16V engine is pulled, ported, stroked, massaged, cleaned, blueprinted, bored, given new rods and cams, and then finally turbocharged. Everything from the block (1Z Diesel Block) to the crankshaft (4340 Billet Steel) have been swapped in for much more heavy duty usage. The power that has been accomplished with this little motor is beyond epic. Would you believe me if I told you that this 2.0L 4 banger makes 1,150Hp, and 1,034lb feet of torque?You know what, there’s more. 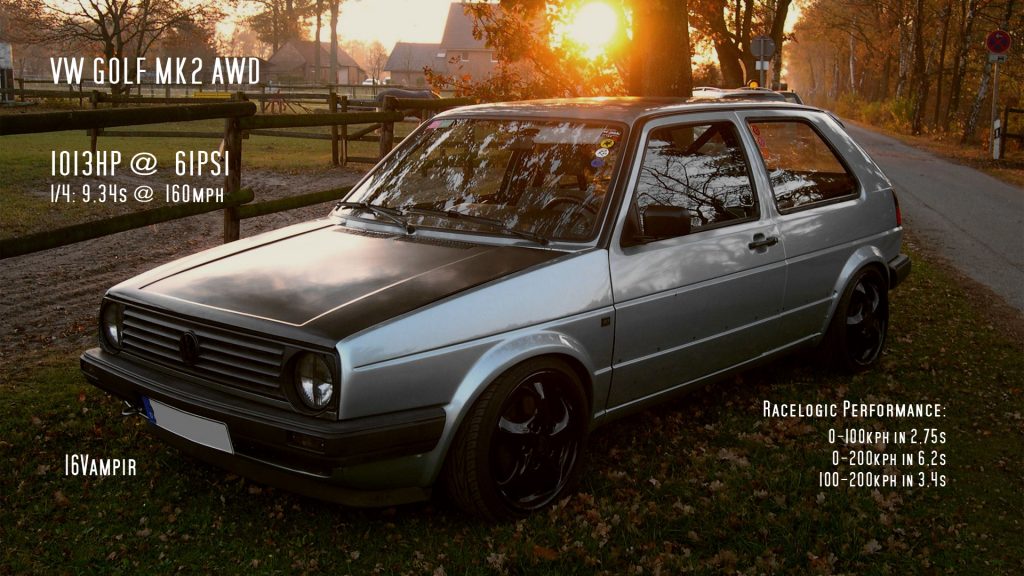 Now, in order for this power to make this little tike go forward, you need to put the power to the ground, correct? Well, Boba Motors felt that a simple FWD set up wasn’t going to be enough for this ride. They sourced a 4 Motion tranny out of an S3, and then some how Frankenstiened it to the under carriage of the Golf. I know that it sounds extremely ridiculous, but it worked. All of that tire squealing, asphalt churning torqueis handled by the 4 Motion system, and it shows in some of the videos during racing, and dyno pulls. The last two components in this beast are the ground controlling KW V1 coil over suspension, and the Sachs Racing RCS200 Clutch that seems to be able to handle transfer of power to torque.

In the long, and the short of things, this car has been built in such a manner that it begs to be raced, or flogged upon with little to no regard. When you look it for face value, it’s the epitome of a sleeper.The exterior, all Mk2 VW Golf, with it’s single rounded headlights, 15 inch wheels, and extremely dull looking paint. Pop the hood, and you come across that moment where you manhood has been checked, dropped into a hot bag of shit, and then thrown down the trash shoot. It’s like nothing you will EVER see under the hood of a Volkswagen. Even the Vision Golf GTi motor isn’t this brutal looking. These men have taken something that is normally given an air ride suspension, shiny or matte wheels, custom interior, and some other show worthy crap, and turned it into a weapon. A weapon that will be used to hunt down a 1,200Hp Gen 2 Veyron Super Sport, or the drag racer’s Moby Dick, which is essentially the 1,700Hp Alpha S tuned GTR. All I know is, this car needs to find it’s way out of lonely old Germany, and start going on a world tour, with it’s first stop being in Russia where it can tangle ass with a few of the big boys of the Dragtimes crew. I’ll be waiting for that show to take place.


12 of the Best Sporty SUVs Ever Created
8 Things to Know about Buying Repossessed Cars
6 of the Best 2021 Wagons
15 Best Concept Cars Ever (And 15 Of The Worst)
10 Best Racing Games For PS4 [Buying Guide]
Making a Difference: Women in Auto Care