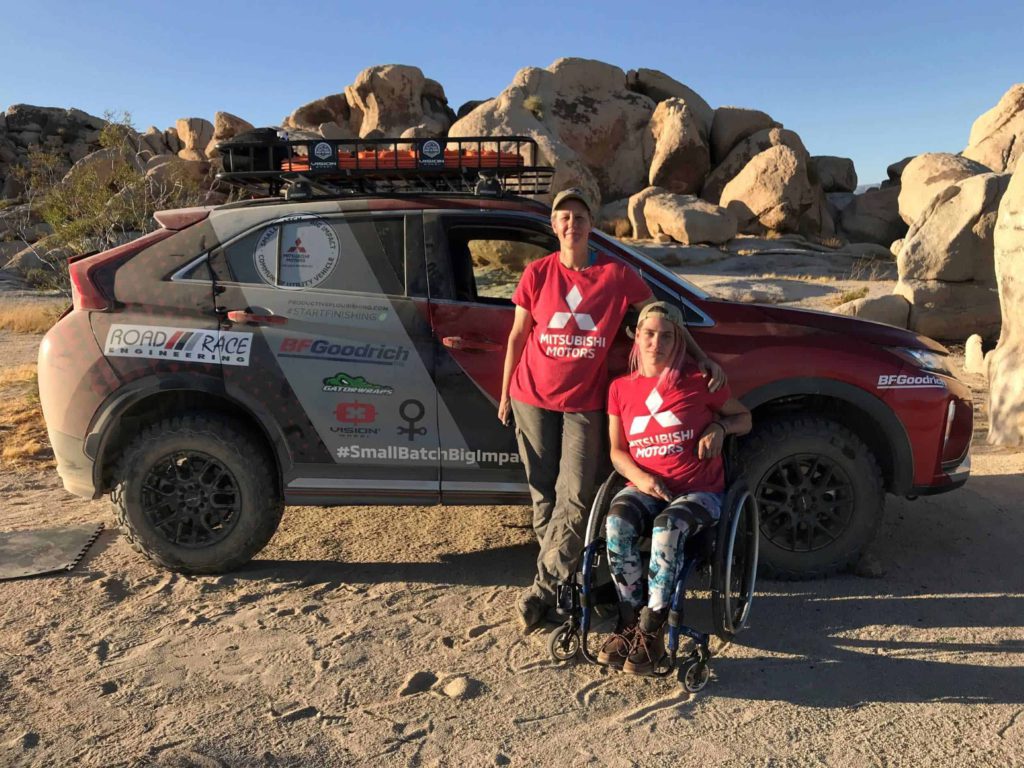 Mitsubishi Motors released its first film as part of its “Small Batch – Big Impact” program. The program’s aim is to support local communities by offering small nonprofits a series of vehicle loans. The film chronicles two female armed forces veterans during their quest for glory at the 2019 Rebelle Rally in a Mitsubishi Eclipse Cross CUV.

Army veteran, Rachael Ridenour, and Air Force veteran, Karah Behrend piloted a minimally modified Mitsubishi Eclipse Cross in the 2019 Rebelle Rally. They took second place in the Crossover class during the grueling 1,200+ mile event. Behrend, an adaptive athlete, medically retired from the Air Force when she lost the use of her legs and parts of her hands. This was due to a progressive neurological disease. Because of this, the team added hand controls allowing Behrend to drive. In turn, she became the first adaptive athlete ever to compete in and complete the event. Their inspirational effort also earned them the Team Spirit award, as voted on by their fellow competitors.

“Training, sponsoring, and competing with the first adaptive athlete to attempt the Rebelle Rally was such an impactful experience for everyone involved,” says Ridenour. “Karah is a tremendous educator. [She believes] the only things in life you control are your attitude and effort.”

Prepared to Achieve and Inspire

Ridenour says getting to the start-line required the most problem-solving. This included deciding which tools, equipment, and gear worked best for them. However, she says it was an amazing, heartwarming process. Sponsors, volunteers, and other Rebelles all stepped up to help get them prepared.

She notes the biggest sponsor impacts came from Mitsubishi, which provided such a capable platform. Ridenour also thanks Road Race Engineering. They did all the prep work on the Eclipse Cross to be rally-ready for an adaptive athlete.

“Over the eight days of competition I grew in ways I never imagined,” says Behrend. “My confidence grew higher and higher with every obstacle we completed. I learned to trust myself, but more importantly I learned to trust my people, my tribe. I came out of the Rebelle Rally as a completely new person.”

“Karah clearly blazed a path for other adaptive athletes to follow,” says Ridenour, “and we cannot wait to see who she has inspired to attempt the 2020 Rebelle Rally!”

Kimberly Gardiner, Vice President and Chief Marketing Officer for Mitsubishi Motors North America said, “Facing tough challenges together, staying optimistic and compassionate in the face of adversity, is heroic, and hearing of heroism tends to bring out the best in all of us. In keeping with our Small Batch philosophy, we’re evolving our engagement strategies and acknowledging what people are experiencing right now. Rachael and Karah’s story offers inspiration and connection at a time when we can all really use it.”

The partnership with Ridenour’s Record the Journey veterans charity late last year marked the start of Mitsubishi Motors North America’s new corporate social responsibility initiative called “Small Batch – Big Impact.” Here the company and its dealer partners plan to redefine the term “CUV” to mean “Community Utility Vehicle.” The CUV program is creating a series of vehicle loans to small nonprofits to help support local communities. Other CUV donations have been made to the Las Vegas-based Goodie Two Shoes Foundation and the Nashville-based Community Resource Center, with each of the charities using their Mitsubishi vehicles to further their respective missions.


11 Coolest Micro Cars in the World
Virtual Car Museums Offer Online Adventures for Automotive E...
The Best 2020 Cars Lotus Has to Offer
Instagram’s “Sexiest” Motorcyclist Killed In High Speed Cras...
The Worst Diesel Cars Ever Made
8 Awesome SUVs You Will Never Be Able to Buy in the USA