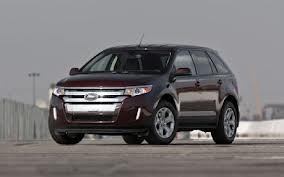 More bad news for Ford owners, if the recent recalls on the Escape weren’t enough to make you reconsider buying a Ford model, the problems just keep on coming. Ford has issued a recall on the 2012 Ford Edge that contains the 2.0L EcoBoost engine. This is due to the same fire hazard potential that may occur with the fuel line pulse damper due to improper manufacturing practices.

Approximately 5,499 Ford Edge EcoBoost models are affected by this recall. They were manufactured between September 2, 2010 and October 31, 2011.

If the part malfunctions, it can be subjected to cracking that could result in one of few things:

It is unclear whether this issue is a result of using the same supplier that initiated the recalls for the Ford Escape, but it is serious enough to warrant the recall of several thousand vehicles.

The EcoBoost 2.0 recall is scheduled to go into effect as of today, September 24th. Ford will notify all owners of the affected vehicles and it is advisable to bring it to your local dealership. They will look over your vehicle and determine if any replacement parts are needed – if so, the parts will be replaced at no additional charge.  With the nature of this EcoBoost 2.0 recall, it is worth having your Edge looked at sooner rather than later.


12 Vehicles You Can’t Own In the U.S. - Land of the Free
4 Reasons Not To Sell Your Car on Ebay
5 Big Takeaways After Driving The 2021 RAM 1500 TRX [Review]
iPhone Manufacturer To The Rescue: Lordstown Electric Truck ...
The Monster Miata. Big Things Come In Small Packages.
The Marauder MPV. Bigger is Better.