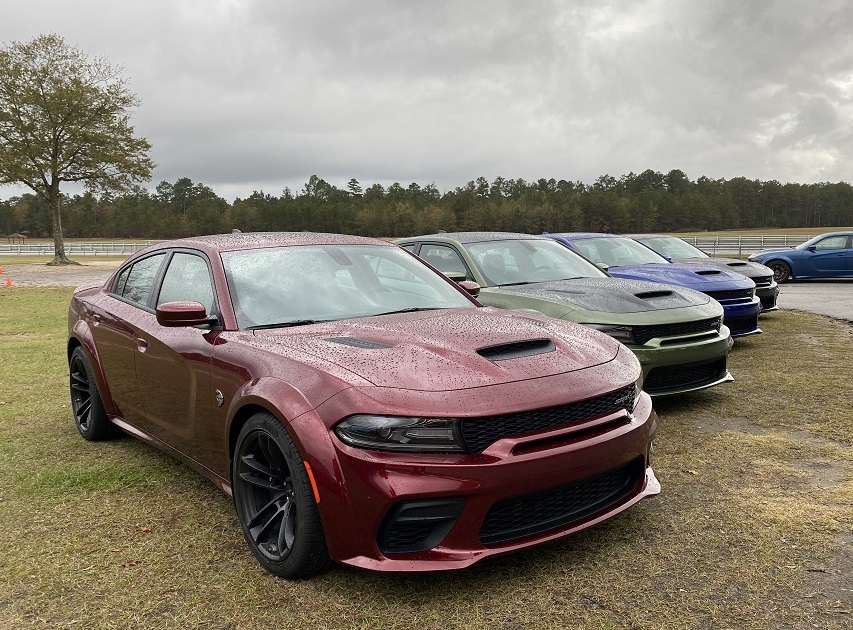 The ugly rumor that sedans are dead is false. Toyota’s compact four-door, the Corolla, is the most-sold vehicle in history, with millions purchased all around the world. The Corolla is a great little car and a stellar first vehicle for a new driver, for sure, but when you graduate and want a sedan with more guts, these 2021 sedans won’t disappoint.

Sedans are smart. They have more headroom than two-seaters or two+twos, fewer blind spots, and you can take a few friends along with you or even a furry friend or two. And there’s no reason to malign the humble sedan because there are certainly a few models that aren’t plain vanilla.

Here are our thoughts on which 2021 sedans have that extra fire in their bellies. 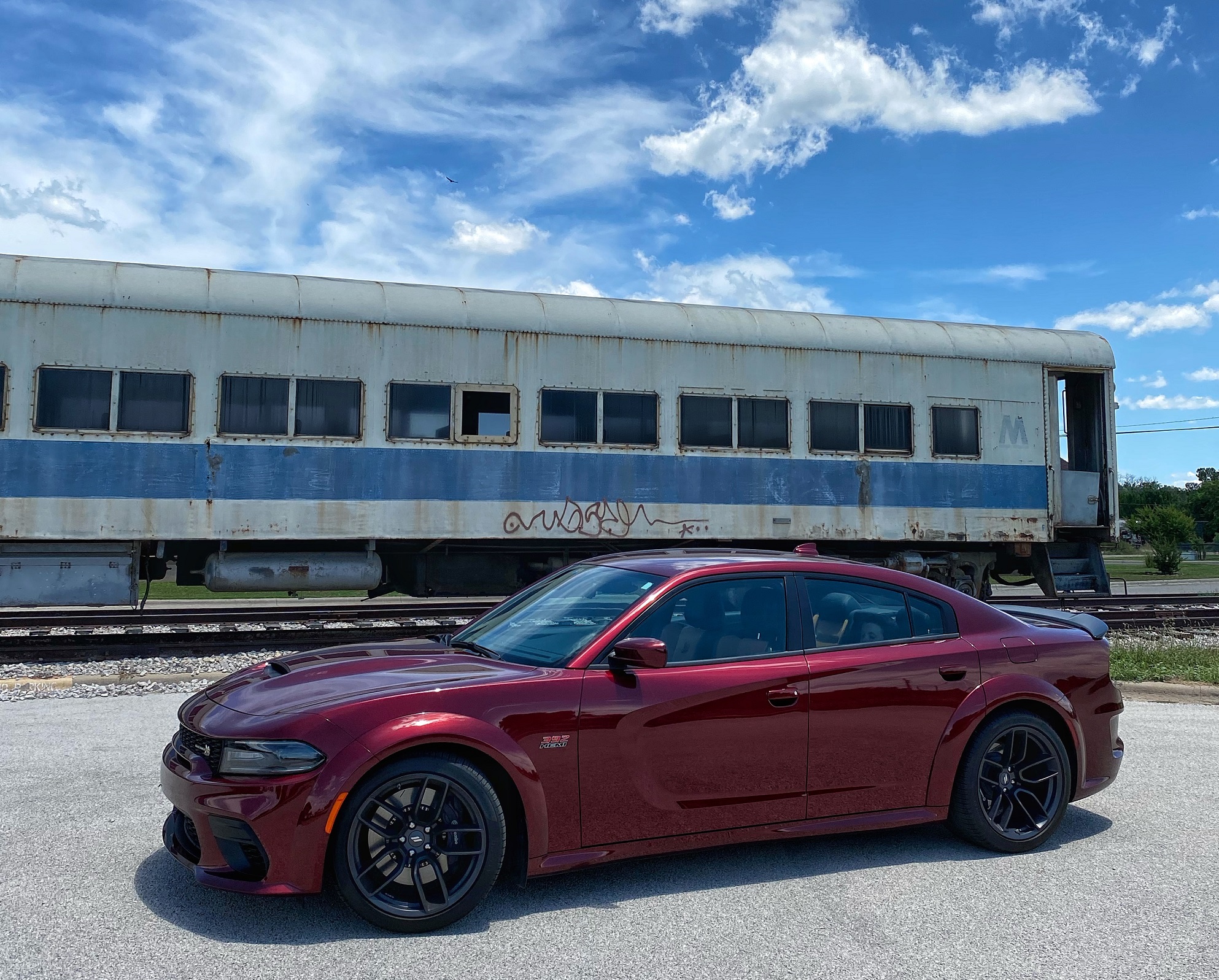 There is a Charger for just about everyone; the four-door car can transform from a fairly tame commuter to a hell-on-wheels 797-hp beast depending on which trim you choose. You can get a Charger with one of five different engines and six trims from SXT to Hellcat Redeye.

Even at basement level, the 292-hp 3.6L V6 is no wallflower, but the supercharged 6.2L V8 brings 797 horses and 707 lb.-ft. of torque to the party, and that is where the wilding begins. It’s the most powerful and fastest mass-produced sedan in the world, and if you’re a sucker for a gas-guzzling dragon of a beast, the Charger is your huckleberry. 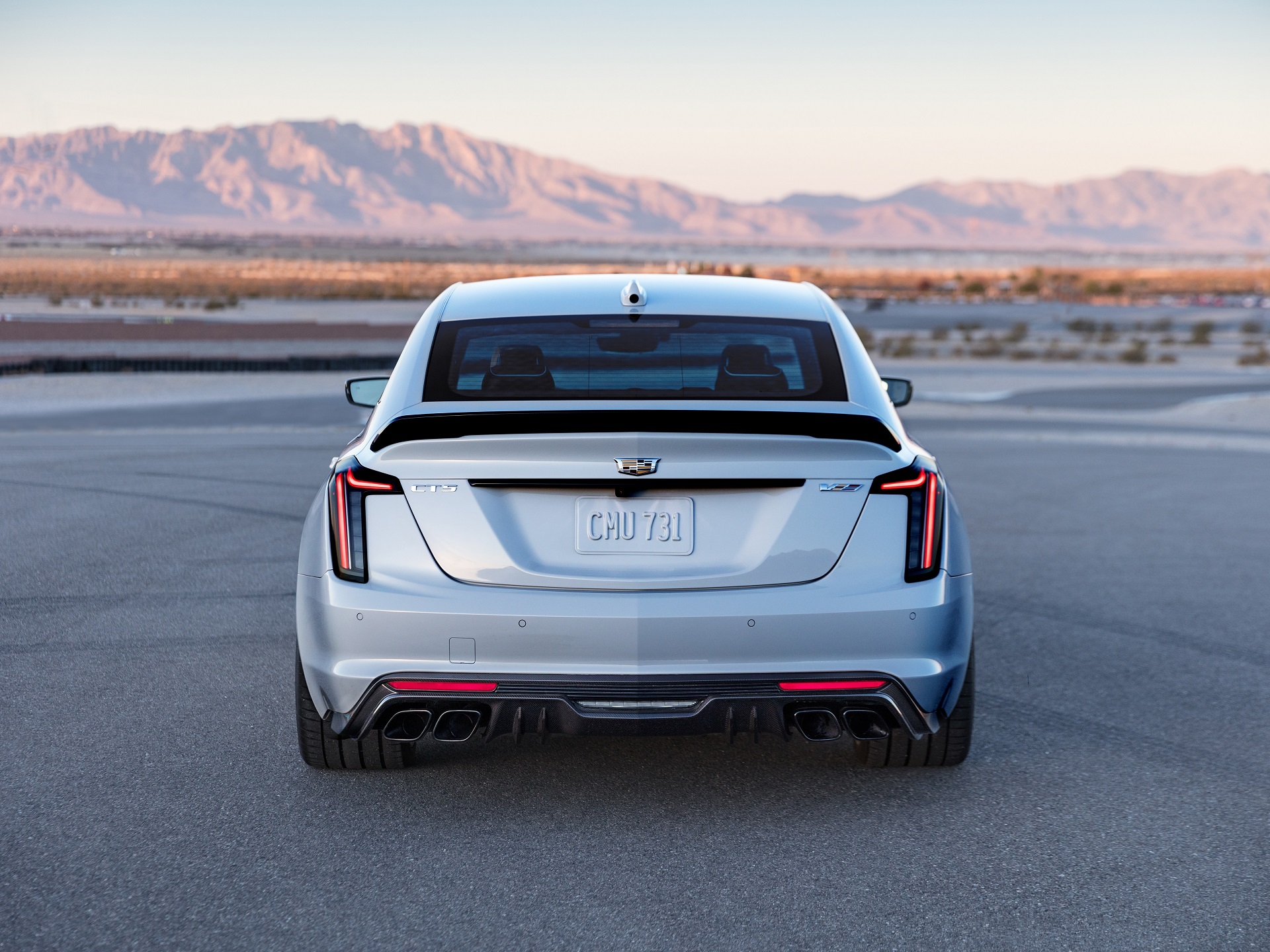 First, let’s have a moment of silence for the CTS-V, which was too powerful for its own good, apparently. With 640 galloping horses under the hood, the CTS-V growled pleasingly, but the market just wasn’t big enough for it. Enter Cadillac’s CT5 and its V-series variant to hold us over for now until the Blackwing emerges for model year 2022.

The CT5-V has a turbocharged 3.0L V6 that makes 360 hp, which sounds like a crime if you had the chance to drive the CTS-V, but 405 lb.-ft. of torque propels it forward with a confident push, and the big Brembo brakes slow it down easily. It’s sporty enough to please people who like to go fast, but it’s not as intimidating as its predecessor. It’s also plush inside, as Cadillacs should be, and SuperCruise is optional.

If you can wait just a little bit longer, though, the Blackwing is going to rise up with a wicked supercharged 6.2L V8 making 668 hp. Either way, this isn’t your grandpa’s Caddy. 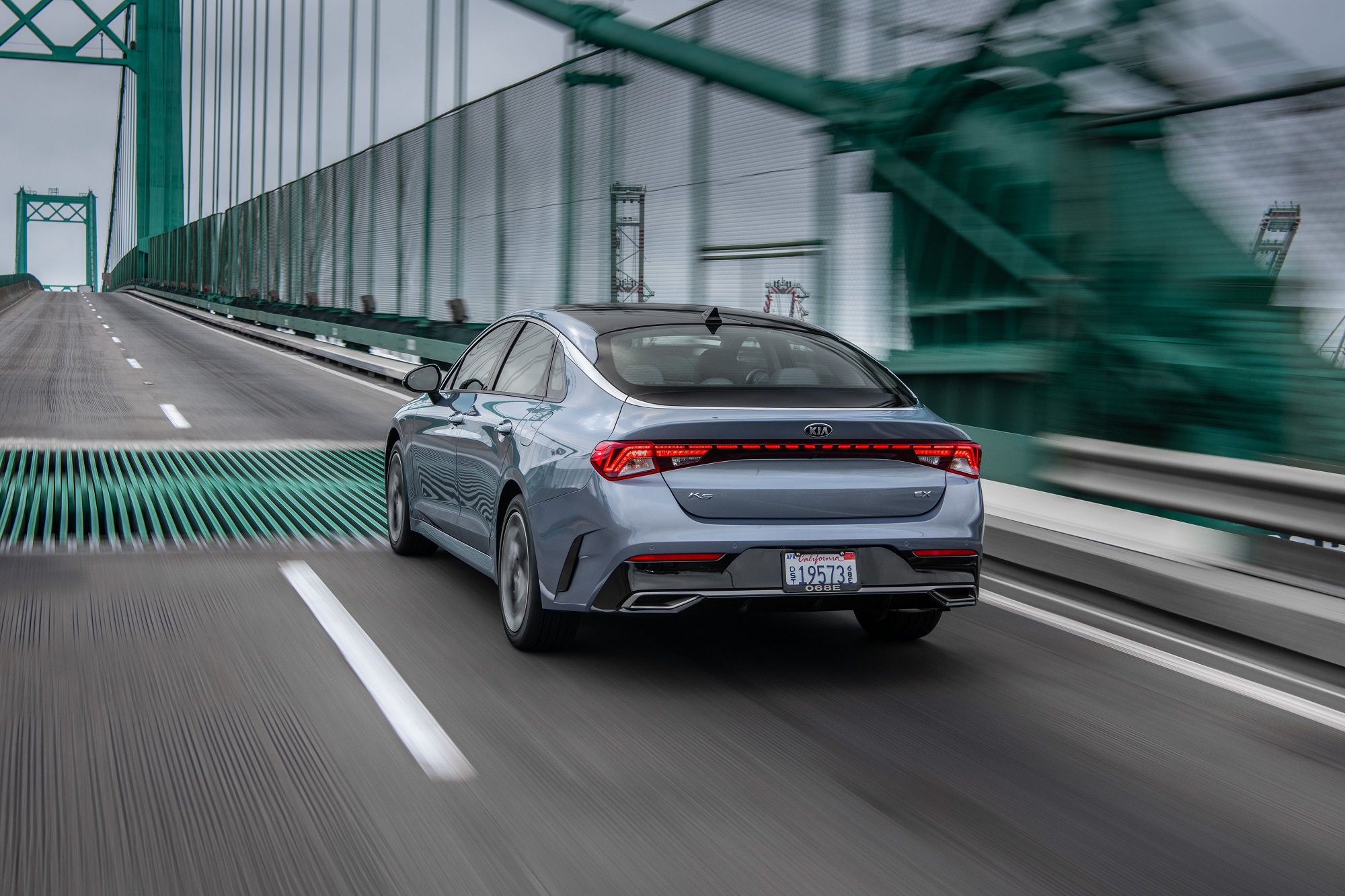 Kia has been notching wins in its belt in the last few years. The Stinger, then the Telluride, and now the K5 have each been hits for the brand, which has come a long way since the Soul-driving hamsters. The base engine for this sedan is a turbocharged 1.6L four-banger making 180 hp, which isn’t that exciting; however, order up a GT, and you’ll get a turbocharged 2.5L 4-cylinder that generates 290 hp. Now we’re talking.

A sport-tuned suspension, 8-speed dual-clutch automatic transmission with paddle shifters, and upgraded brakes tie this package together with a nice, fat bow. I have to say that I was honestly surprised when I pressed the pedal to the floor, but it was a lovely surprise. This is a value sport sedan that is worth a look. 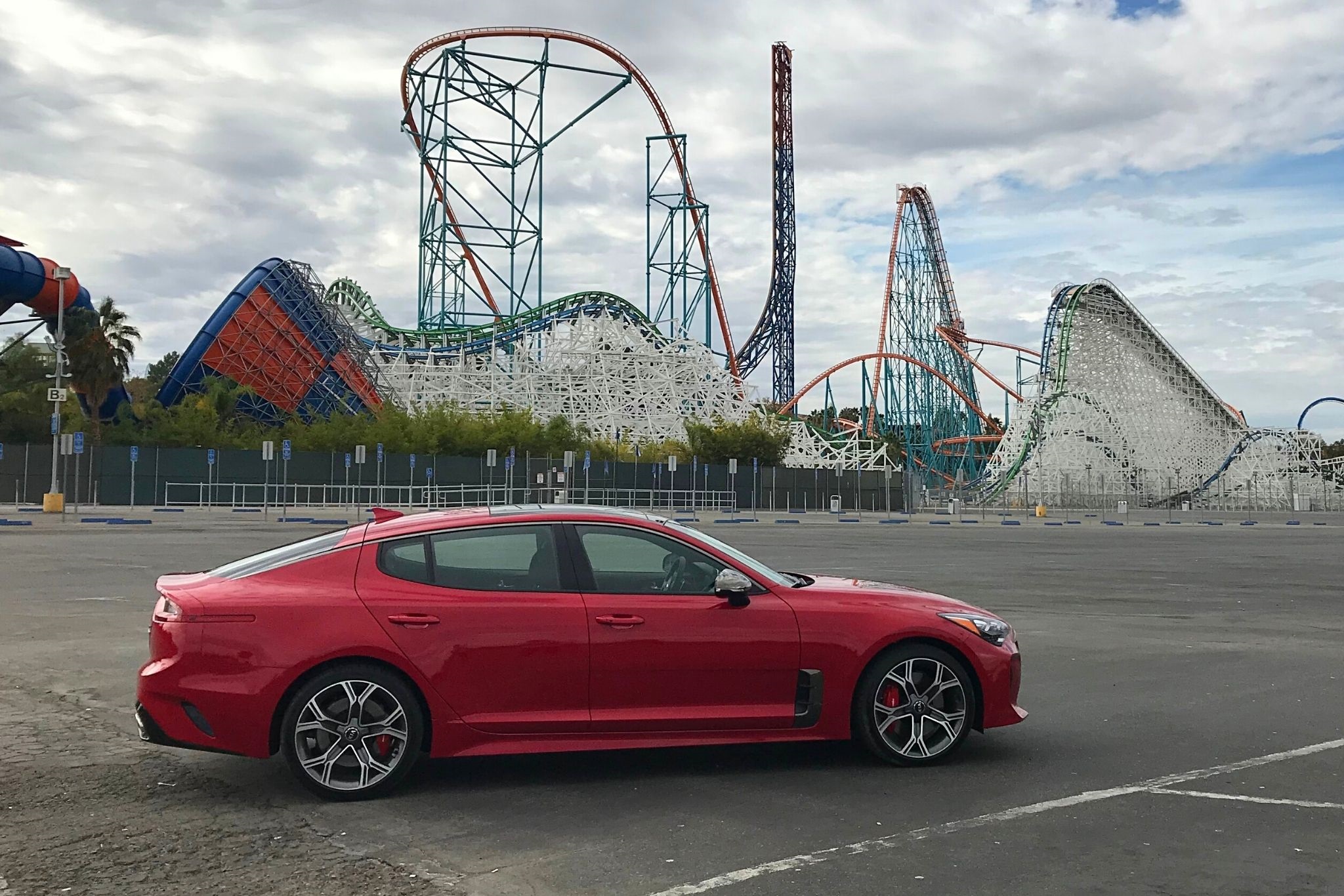 What is the meaning of putting two Kia sedans on this list? Because they both deserve recognition as value sport sedans. Of course, Porsche’s Panamera is stunning, and BMW cranks out sporty sedans all day long, but those are a heck of a lot pricier than a Kia Stinger. Unless you break it down, you might not realize that the Stinger has a 365 hp 3.3L V6, which is a sprightlier engine than the base Panamera’s (2.9L V6 making 325 hp).

Before launch, Kia ran the Stinger for over 6,000 miles on the Nürburgring alone, then skidded down winter roads through the Austrian Alps and near the Arctic Circle in Sweden, and tested its tolerance for hot weather in the Mojave Desert for a total of one million miles of testing around the world. On a road course, the Stinger races through the curves and can smoke it up with the best of them. Ask me how I know. 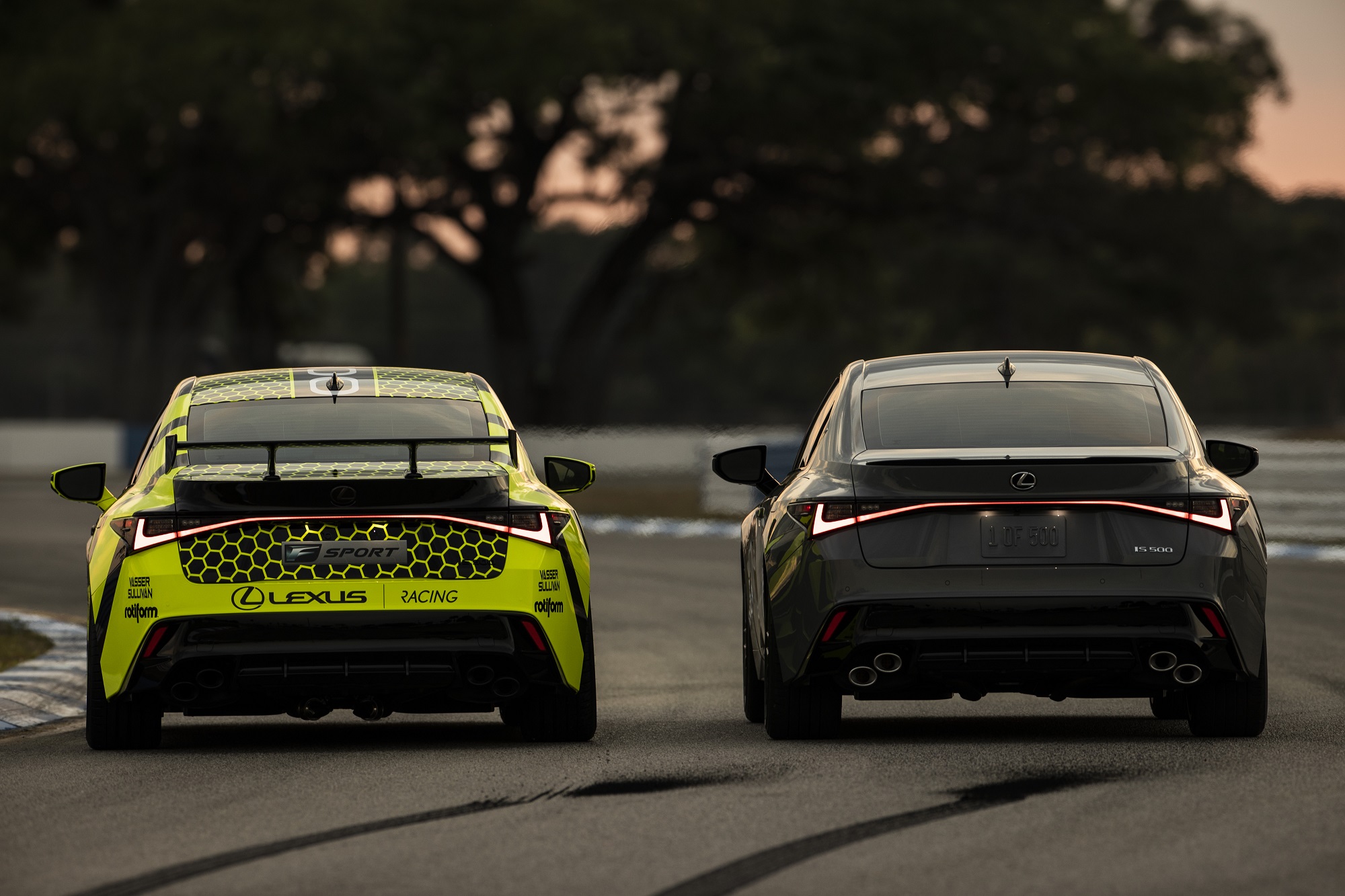 Lexus’ 2022 IS 500 F Sport Performance represents what many auto journalists are heralding as the end of an era: a vehicle powered by a naturally-aspirated 5.0L V8.

The first model in the new F Sport Performance line, the top-of-the-line IS 500 brings 472 hp, quad exhaust tips, and a roar you wouldn’t expect from a mild-mannered Lexus sedan. Sure, a base IS model starts with a 241-hp turbocharged 2.0L inline-four, and you could opt to upgrade to a 311-hp V6 from there, but the 472-hp V8 is clearly the star of the show.

To give you an idea of what this vehicle can do, you should know that it shares an engine with Lexus’ RC F sports car, which is ready to scream around your local track as quickly as you can get it there. I took a ride with racecar driver Townsend Bell inside a one-off version of the IS 500 with a carbon fiber rear wing borrowed from the RC F Fuji Speedway Edition. While this powerful sedan isn’t meant to be a track day car but rather an everyday driving car, Bell proved that it could hang with its two-door stablemates, drifting around corners and screaming down the straightaways. 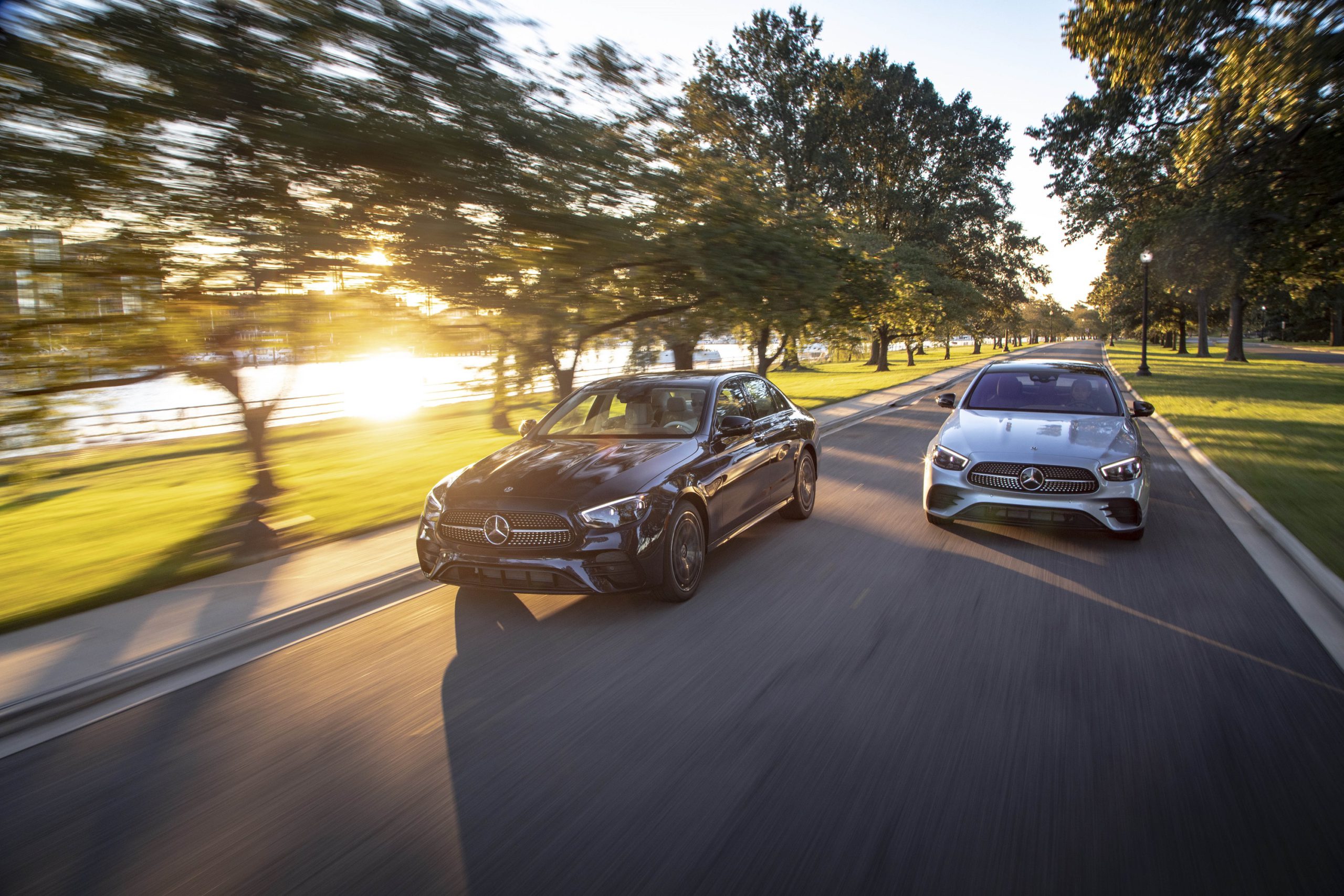 There’s no question that Mercedes-Benz makes a stellar sedan with both strength and elegance. The AMG line takes it a stairstep — or maybe a whole flight of stairs — above average with added performance and raw power.

Paired with a 9-speed automatic transmission and 4Matic all-wheel drive, the Mercedes-AMG E 53 rocks a 3.0L inline-six that makes 429 hp and 384 lb.-ft. of torque. Matched with a sport-tuned air suspension and a streamlined body, this sedan is one of the most expensive vehicles on our list, but it’s such a superlative vehicle that it’s worth a mention.

Sibling AMG E 63 has a sport suspension to cushion the brawn of its turbo 4.0L V8. The sedan’s 603 hp and 627 lb.-ft. of torque send you flying down the road with a primal roar. 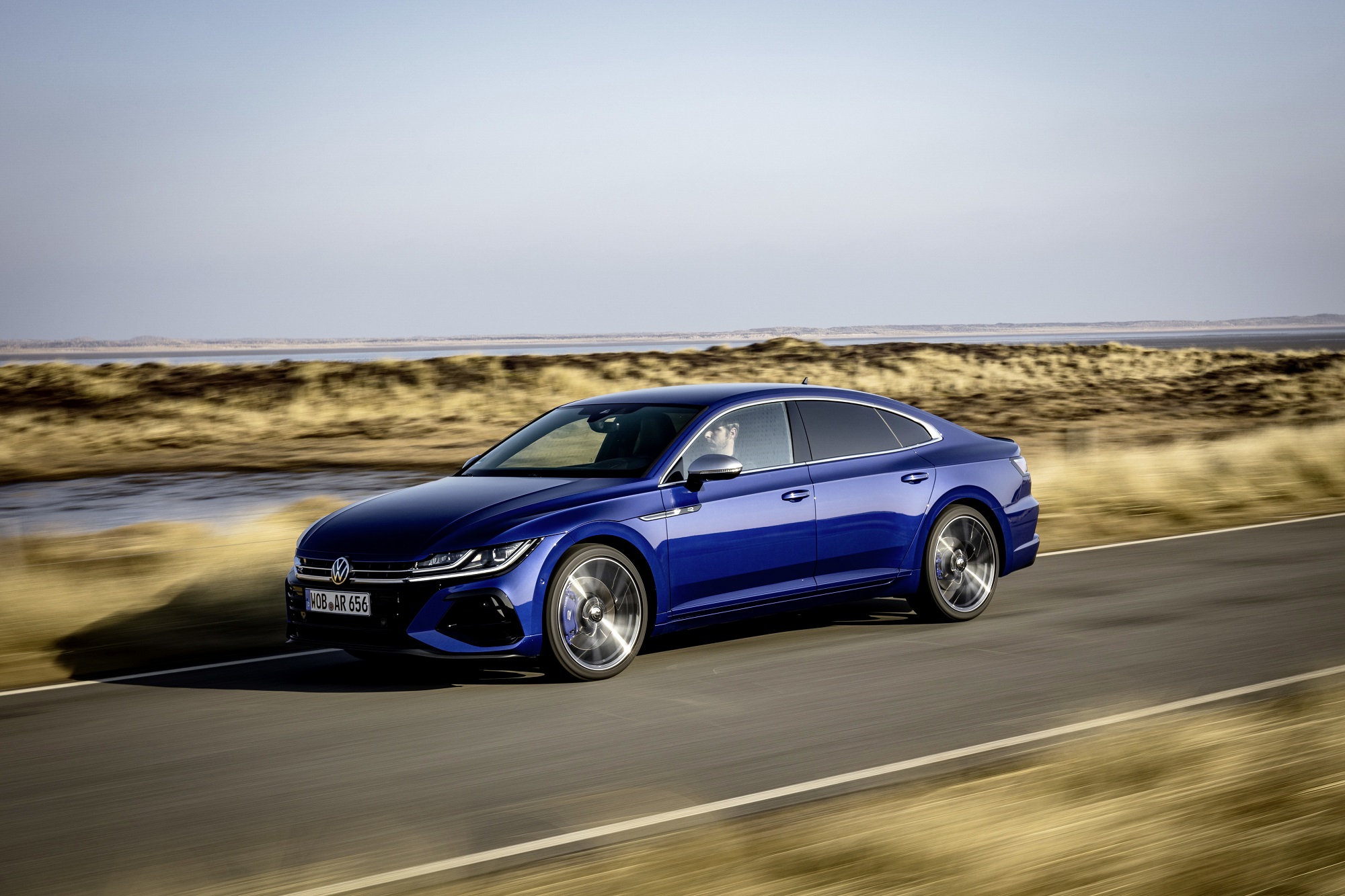 I had a chance to test out a Volkswagen Arteon at a Texas Auto Writers Association event a few weeks ago at the Texas Motor Speedway and found it to be playful and expressive. At the time, I had heard that it felt like a low-key Audi A5, but I scoffed at the idea. I’m not scoffing anymore. The Arteon is the real deal.

Don’t turn up your nose at the 2.0L 4-cylinder, 268 hp powerplant in this vehicle, which is almost identical to the Audi A5’s. For style, the Arteon sports a curvalicious body that transcends the VW-branded cars from my childhood. The Arteon feels stable at higher speeds, shifting smoothly. It’s the grown-up version of a Golf GTI, which includes a smaller space and a completely different profile.

Starting at $37,000 and ranging up to about $50,000 for the Premium R-Line trim, the Arteon is equipped with quite a few amenities at the starter level and doesn’t skimp on the power even at the lowest tier.

If you’re in the market for a new vehicle, don’t overlook these 2021 sedans. From value-packed sport sedans like the Kia K5 GT to sinister saloons with downright crazy amounts of power like the Charger SRT Hellcat Redeye, these seven vehicles prove that sedans are far from dead.