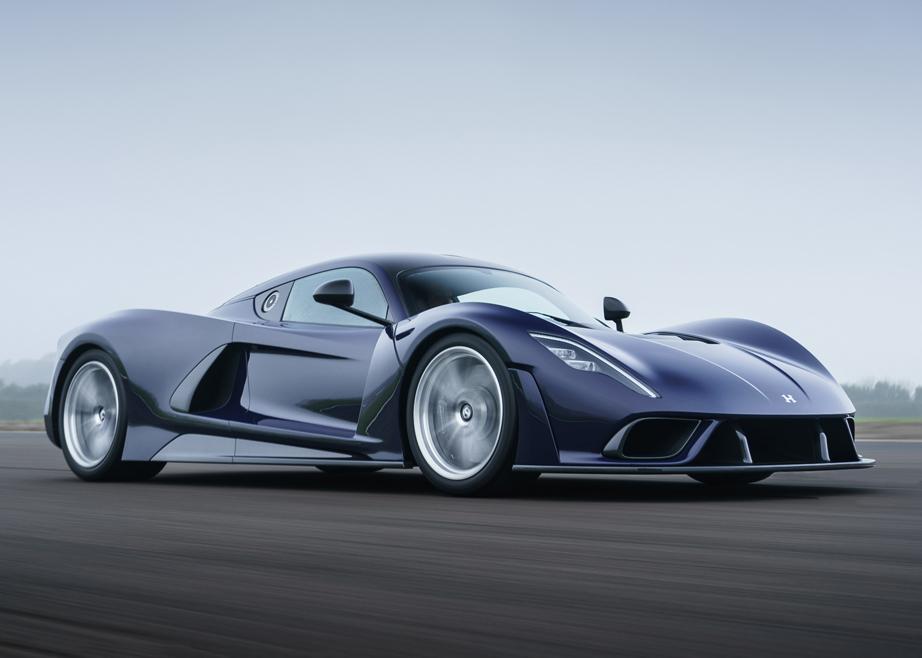 Hennessey has always been known for big power fast cars, especially in a straight line. There are lots of big open spaces in the Lone Star State where they’re made to tap into big horsepower. The Venom GT debuted 10 years ago as the first Hennessey hypercar, breaking all kinds of speed records along the way, and was based on a Lotus Exige chassis. Today we finally got to see the much-anticipated production version of the Hennessey Venom F5, the American hypercar that debuted in concept form in 2017. The Venom F5 should do well around corners as well as in a straight line.

With over 10,000 vehicles built/modified since Hennessey started in 1991 the Venom F5 is a big milestone for the company. The F5 represents the American Hypercar dream that John Hennessey has been chasing for 3-decades now, with a bespoke machine built in Texas worthy of a new ‘H’ logo. 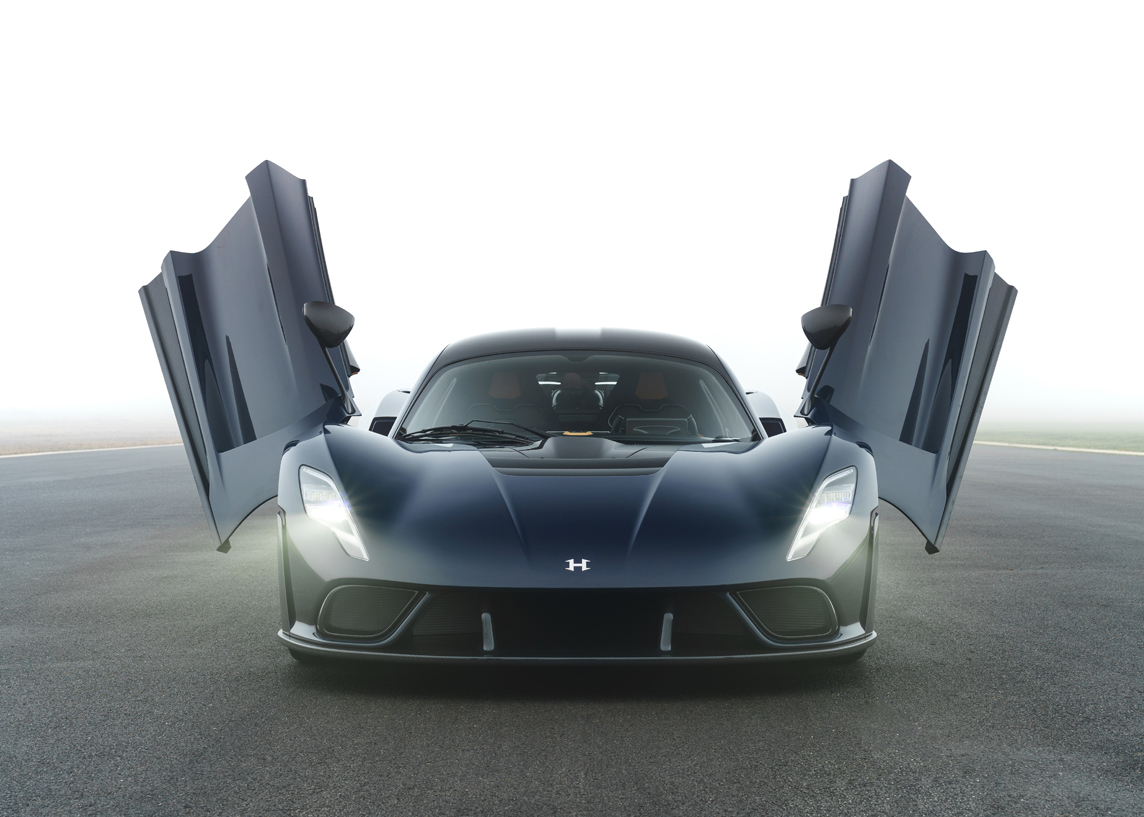 “This car goes against the grain of modern hypercars, many of which have become soft and docile. The F5 resets the balance, having been designed from the ground up to be the antithesis of the ‘everyday hypercar’ – it will always be an occasion to drive.” – John Hennessey

Let’s get the jaw-dropping numbers out of the way first. The bespoke massive Hennessey ‘Fury’ twin-turbo 6.6L V8 puts out 1,817 hp and 1,193 lb.-ft. of torque. Those numbers are big enough that Hennessey is claiming “the world’s most powerful road car” title.

The next massive number isn’t all that surprising. The Hennessey Venom F5 will have a starting price of $2.1-million. The funny part for those of us that don’t have unlimited car budgets is that the F5 will be a bit of a bargain in the hypercar space. Consider that the Bugatti Chiron, Konnesig Jesko, and the Gordon Murray T.50 all have starting prices around $3-million.

While those are massive numbers all around, the tiny number is the one that counts. Only 24 of the Hennessey Venom F5 American hypercar will be produced. That makes this car an instant collectors car, and will no doubt relegate a good percentage of them to rotting away in underground parking garages in Dubai. 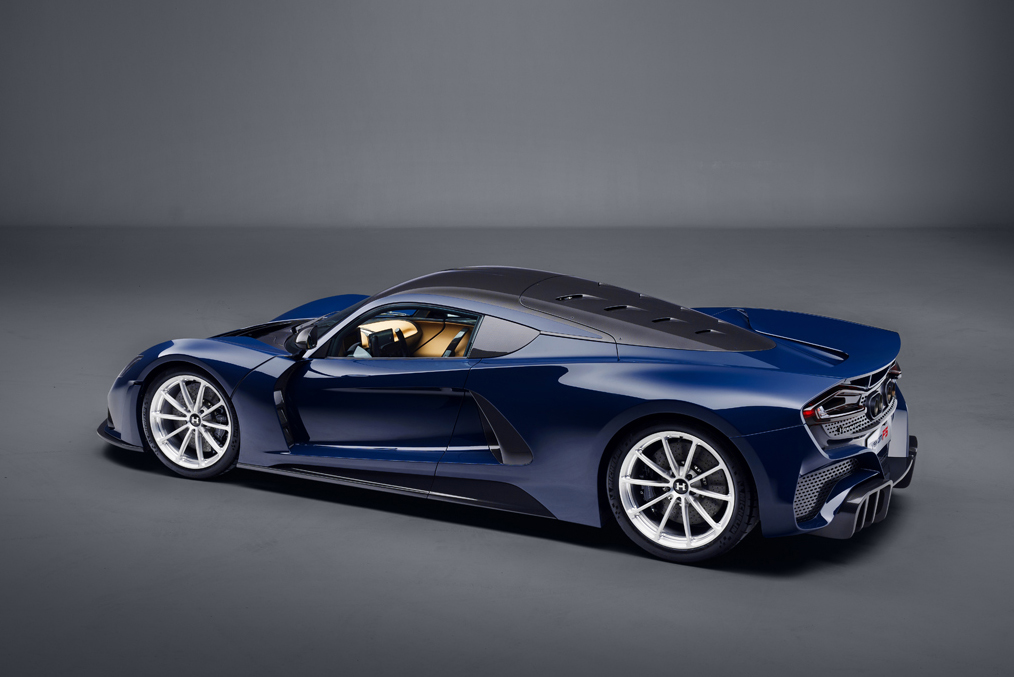 Going against the grain of modern AWD hypercars, the Venom F5 will have to put the power down through its rear wheels only. In order to order to control the ‘Fury’ a Motec management system handles power delivery and traction control through five drive modes (Sport, Track, Drag, Wet, F5), with the top F5 mode being the only one that unleashes all the ponies. That power is sent through a paddle-shift controlled semi-automatic single-clutch CIMA gearbox with seven ratios. The top 7th ratio is theoretically capable of 334 mph.

Fun Fact: the Venom F5 is geared to be able to go 73 mph in reverse.

A custom carbon-fiber monocoque chassis makes the Venom F5 one of the most torsionally rigid cars to ever hit the road. Along with carbon-fiber body panels and aluminum front and rear subframes, this car comes in at a dry weight of just 2,998 lbs. 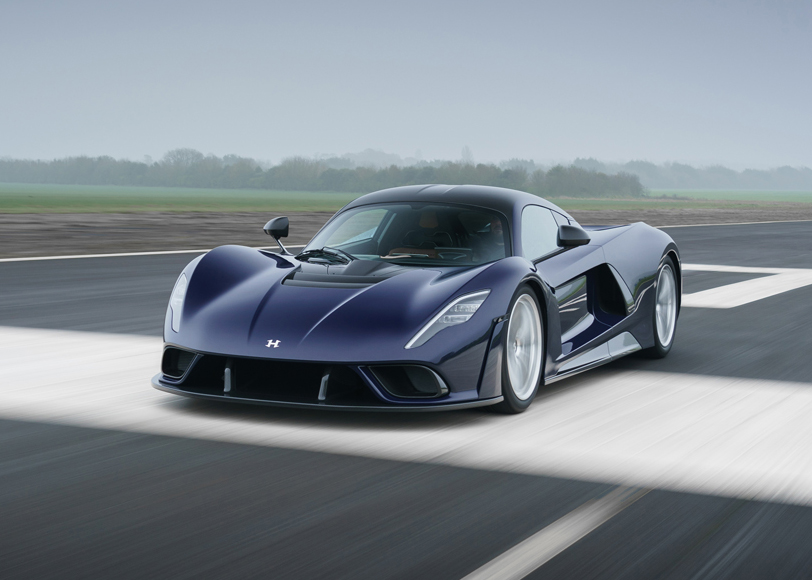 The Fujita tornado intensity scale maxes out at F5. The F5 category of tornado has wind speeds that can reach 318 mph, a similar number to the 311 mph targeted top speed of the Venom F5.

Hennessey plant to actually test the top speed and set a new independently verified record sometime in 2021 at the NASA Kennedy Space Center’s 3.2-mile long Shuttle Landing Facility runway in Florida. A back-up plan will also be in place in case they literally run out of runway. To reach its full potential the Venom F5 might need a longer road, which will be a “closed public highway.” 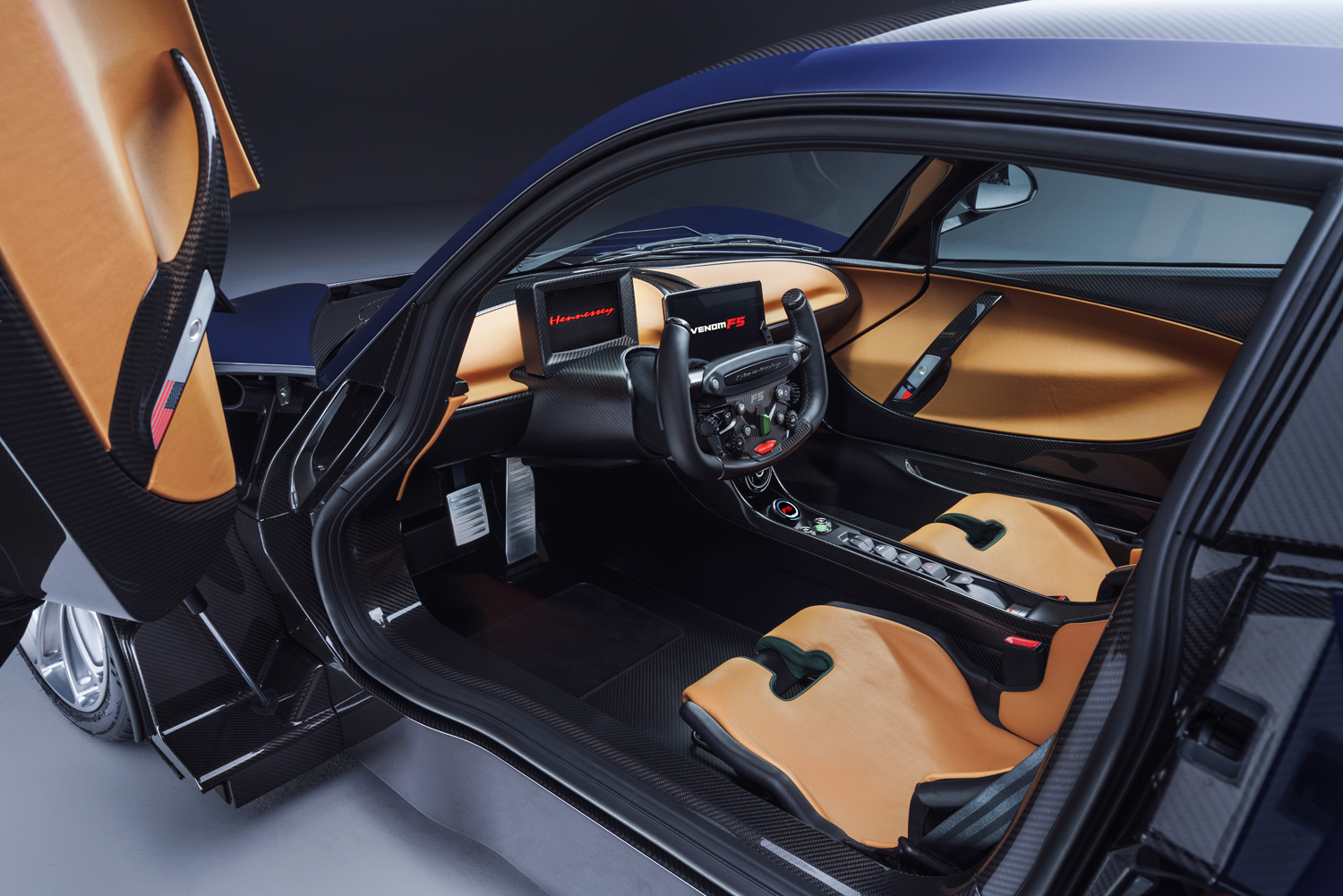 The fighter jet-inspired steering wheel and super minimalist leather and carbon two-seat interior is all about the driver and a very raw driving experience. I can’t even imagine 1,800 hp screening behind my head! I’ll gladly volunteer to find out what that’s like, however. 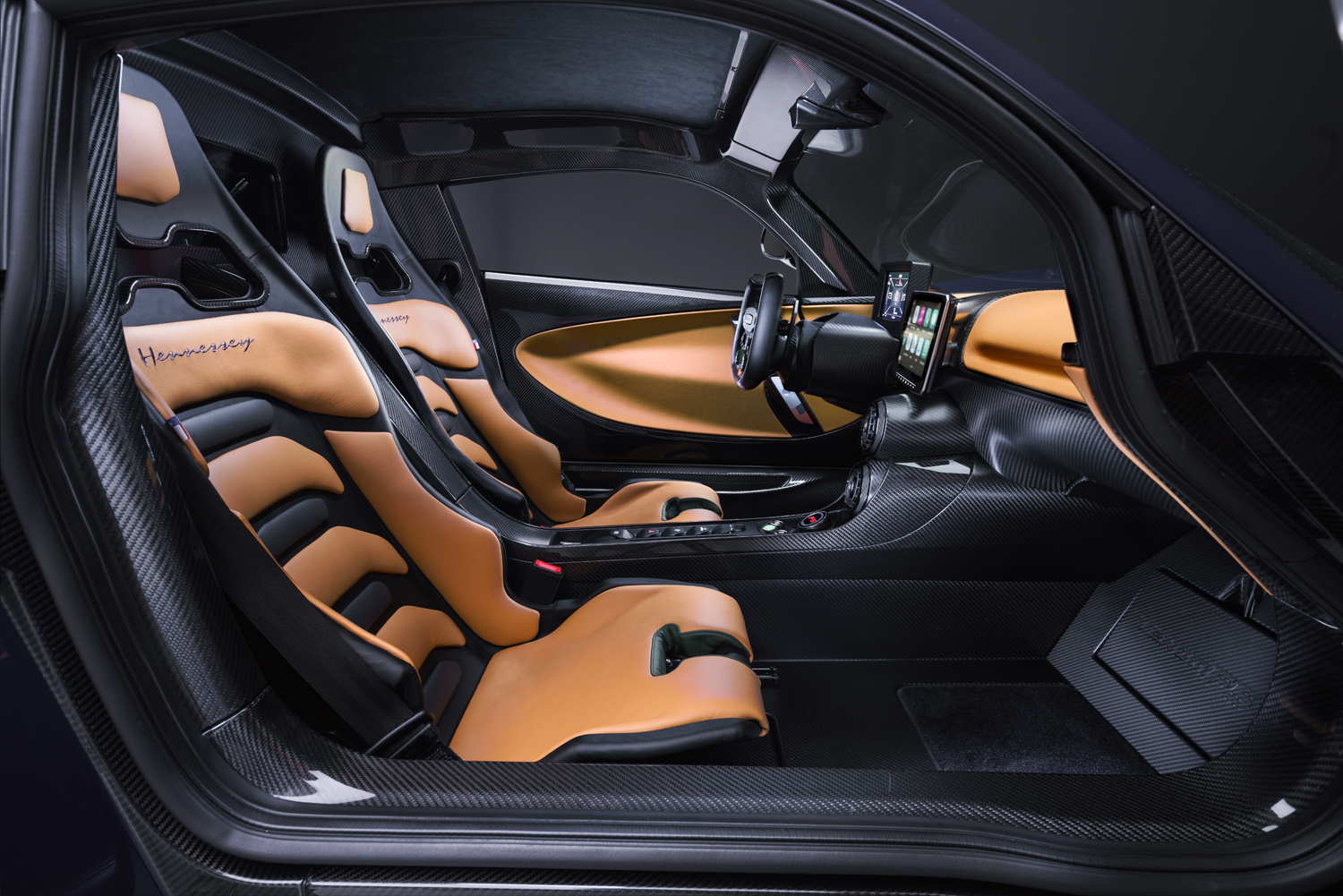 We’re going to mostly leave the exterior looks discussion for you to ponder. There are many reminiscent lines from its peers and it has some gorgeous details. Does the car sitting still make your heart beat a bit faster? While we are enjoying running our eyes all over this mighty hypercar and would love to strap into the cockpit, we’re not sure the exterior design provokes the emotional response that a car of this caliber should. 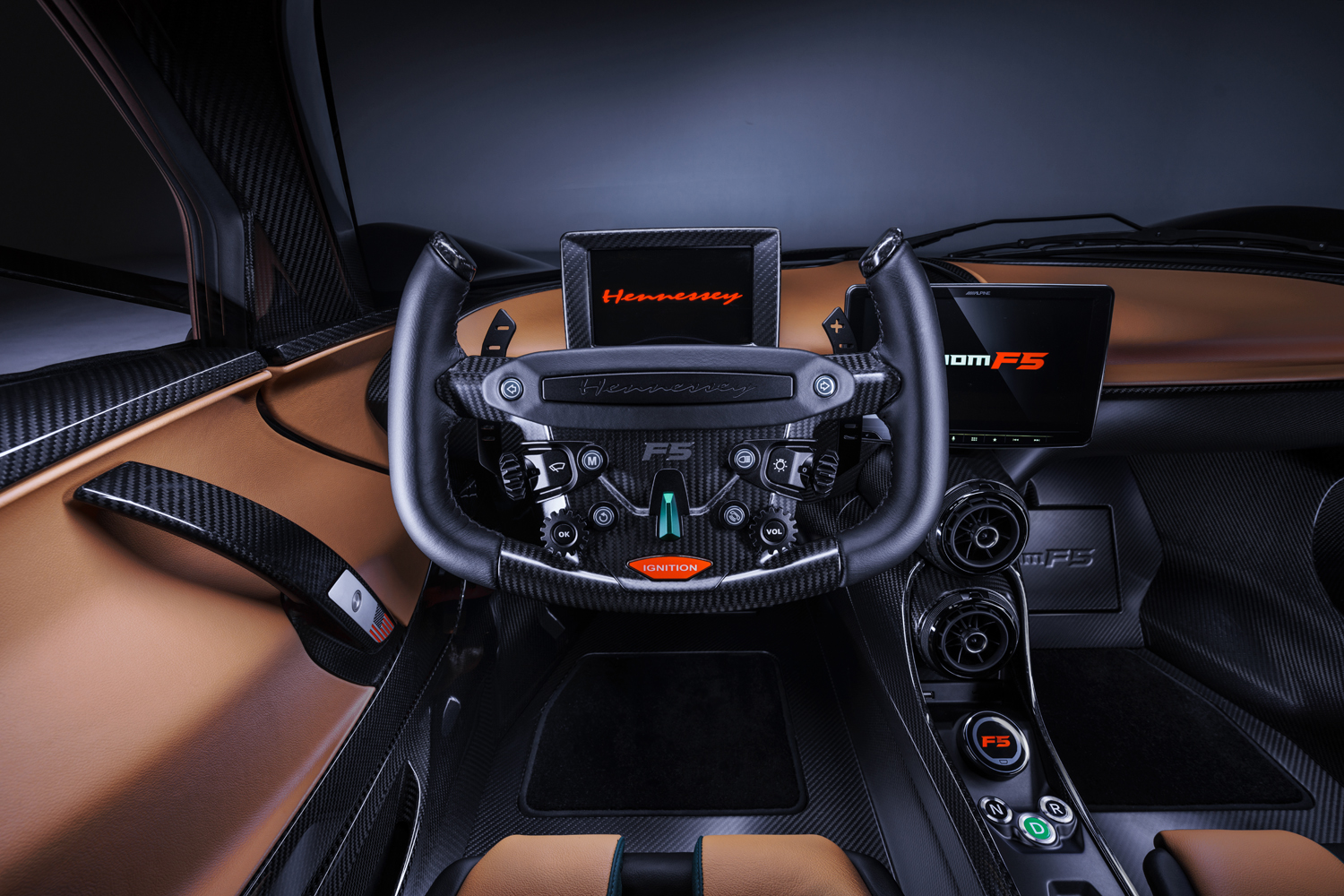 The first deliveries of the Hennessey Venom F5 should come in late 2021. To stay up to date and/or get in your own order for this one of a kind hypercar be sure to visit HennesseySpecialVehicles.com. 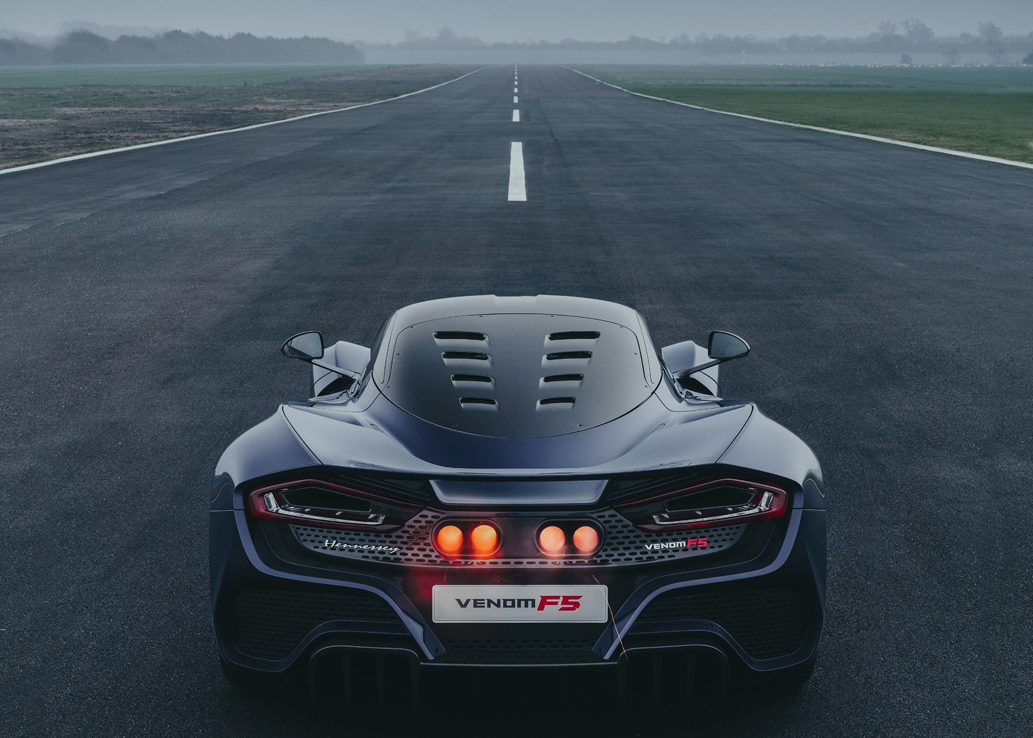