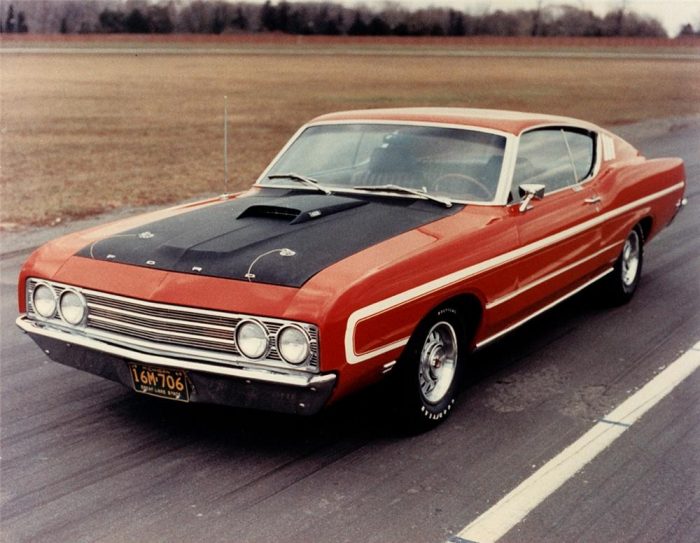 Being one of the world’s biggest carmakers, it’s no wonder Ford produced a myriad of different special edition vehicles over the years. This is one of the reasons I’ll have to apologize in advance. Apologize for not including some of them that probably would have found their way into the list had Blue Oval been less important in the auto world. I mean, I could have compiled a lengthy special edition list by including Ford trucks or Mustangs only. Which gives me couple of ideas for the future. But don’t worry. We’ll continue the series in other article(s), so your suggestions on the matter are more than welcome.

Apart from bringing Saleen S7 into this world, California-based company is known for their special edition conversions for the Blue Oval. F-150 S331 line of normally aspirated and supercharged trucks is one such limited run. They’re both based on SuperCab FX2 F-150 and were fitted with the 5.4L V8 mills (exception are 6 known SuperCrew models). Difference is; base models started from $45,549 and delivered 325 horsepower, while supercharged models used Saleen’s own 2300cc blower and warranted a sticker of at least $55,549. In addition, they also made 450 ponies. On the visual side, Saleen S331 performance pickup used 23-inch forged wheels, 22-inch BFGoodrich g-Force T/A radial tires, stamped aluminum hood, and rocker-panel extenders. Only 398 of them have been produced of which one came in Rainbbow, and another one in Speedlab Yellow paint scheme. 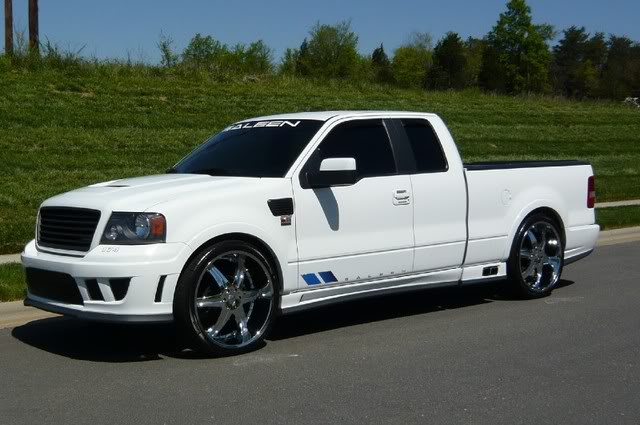 Pinto Cruising Wagon with porthole bubble rear side windows, blacked-out grille and trim, and garish decals has already been available since 1977. Then came the modern redesign in 1979 and Rallye package which added sportier look. Finally, for 1980, Ford offered all that together in Pinto Rallye Cruising Wagon. Porthole windows, lower body Rallye decals, unique wheels, new suspension and even different Rallye instrumentation on the inside. That’s what the package offered. Unlike every other year of Pinto’s production stint, however, 1980 didn’t offer a V6. 88-horsepower 2.3L in-line four remained the only option at the end of the line. What could have been chosen, though, are 4-speed manual or a 3-speed automatic transmission. 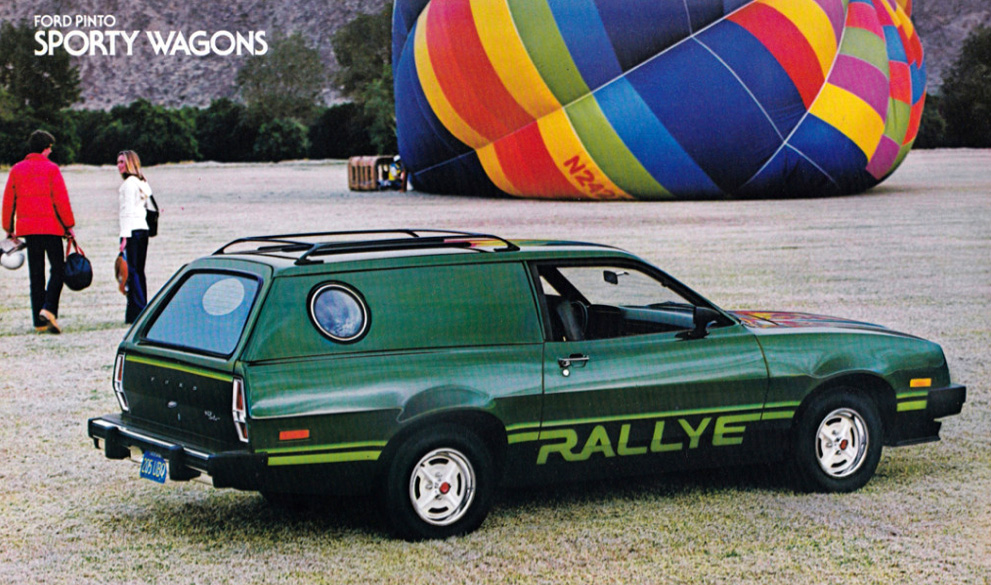 Ford Torino Talladegas are well known and accounted for even though they were very rare for production car’s standards. Homologation special named after Talladega Superspeedway racetrack in Alabama was completed in 743 copies. All were stuffed with the 428ci Cobra Jet V8 generating 335 horsepower officially. More like 400 to 450 ponies in the real world. That wouldn’t have been unusual hadn’t racing Talladegas been fitted with 427ci V8s initially and 429ci Boss Mustang V8s later on. Torino Talladega would go on and win 29 Grand National races during the two NASCAR seasons. Of 743 Torino Talladegas produced, 286 were painted Wimbledon White, 258 came in Royal Maroon, and 199 were Presidential Blue.

There were also 3 prototype Torino King Cobras built but the project was scrapped after NASCAR changed the homologation rules and demanded 3,000 cars sold to the general public instead of 500 as was the case prior to 1970. 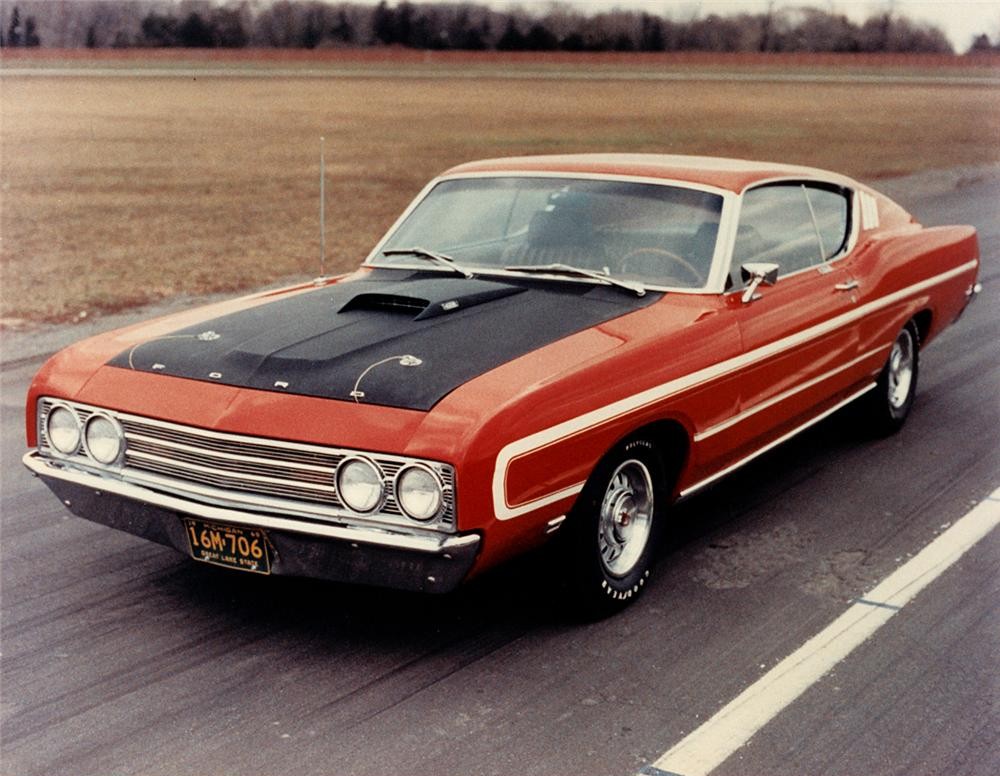 It’s one thing to cast a downscaled toy version of a car, but it’s entirely different doing things the other way around. We’re kind of used to that when it comes to Tonka, though. One of their latest offerings was the late twelfth generation F-150. Produced by Tuscany Motor Company in Elkhart, Indiana under license from Hasbro, Tonka F-150 was a limited 500 model run available for no less than around $72,000. Most of the truck is stock, like the 5.0L V8 mill under the hood. Distinction comes from Tonka’s signature bright yellow paint job, 20-inch Tonka alloy wheels, BFGoodrich All-Terrain tires, Dual Tone performance exhaust, Pro-Comp 6-inch suspension lift, and leather seats with Tonka logos. One thing is for certain. This thing is anything but a toy. 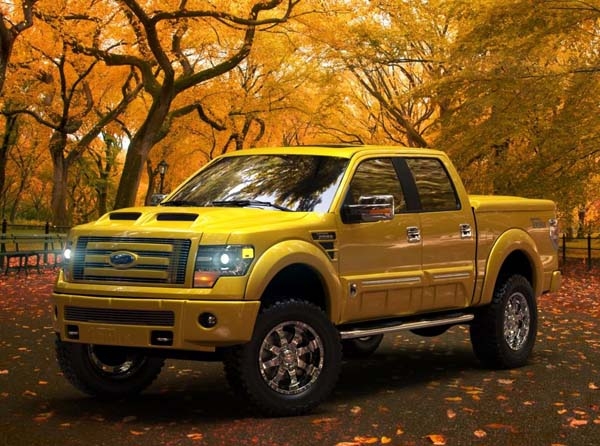 Looking back, Fox Body Mustang hardly deserves to be called muscle car, but we all know the oil shock and EPA regulations circumstances. This doesn’t mean there weren’t some intriguing special edition Fox Mustangs. One of the rarest of them all came as a result of McLaren Engines of Livonia, Michigan and then freshly revived Ford’s Motorsports division collaboration. McLaren M81 Mustang was initially offered at $25,000 (over $70,000 today), and was intended in 249 copies. In the end, only 10 of them were made. It seems the world simply wasn’t ready for such an expensive Fox Mustang during the OPEC crisis. And it wasn’t much of a performer, although McLaren did what they could with the stock 2.3L 4-cylinder. Instead of making 130 ponies, they pushed it towards the 175 hp mark. With adjustable pressure boost (5 to 11 psi), it could have even made 190 horses. 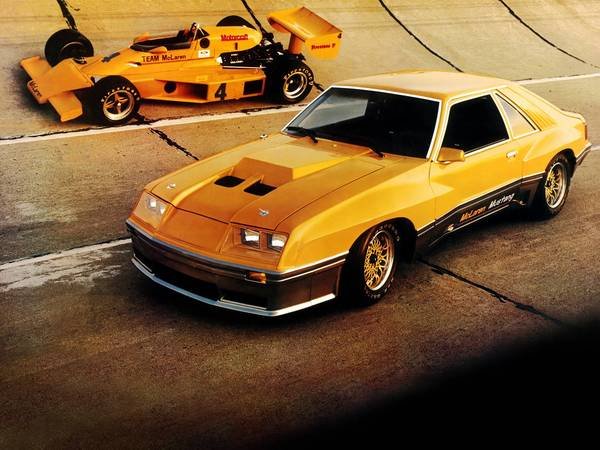 Broncos and a Bronco. Excuse me for saying this, but I don’t believe there’s been more meaningful special edition vehicle in automotive history than this one. And it was made by chance. Back in early seventies, off-road legend Bill Stroppe went on to build one of his occasional projects for Ford. That project happened to be the Baja Bronco and only 650 of them ended up being sold over the span of four years. However, 214 cars remained unsold and Stroppe didn’t know what to do with them.

They were later acquired by Golden Ford who immediately realized their potential due to their orange/blue/white paint job. Golden Ford added white fender flares, special decals and Grabber Blue roofs, and marketed the remaining Stroppe Broncos as Denver Broncos special edition cars. 138 of them were Sport Package Broncos, while 76 were Ranger Package models. Additionally, all were fitted with 302ci V8’s and 77 had the 3-speed manual gearbox. 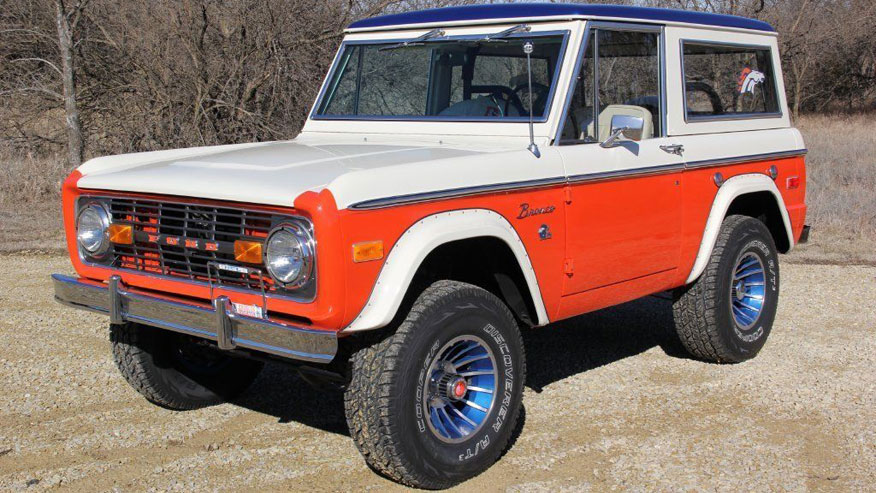 Thunderbird always stood at or around the top of the Ford line, and ninth generation (which was a huge step in a new direction design-wise) finally benefited from designer special edition which was a rather common concept in Lincolns. Designer of choice was Fila – then up and coming Italian sportswear brand. Choice of colors was limited to Pastel Charcoal, Red, Black and Dark Charcoal, with accompanying Dark Charcoal lower trim, and red and blue bodyside tape stripes. Interior was also upscale with Oxford White leather bucket seats or optional Pastel Charcoal suede substitutes. Fila Thunderbird owners even received special Fila accessories bag with beach towel, sun visor and two wrist bands among other trinkets. Not enough for additional $2,000 atop the other most expensive T-Bird, in my opinion. As for the engines, either 120-hp 3.8L Essex V6 or 140-hp 5.0L Windsor V8 were available. Only 2,532 were ordered, however. 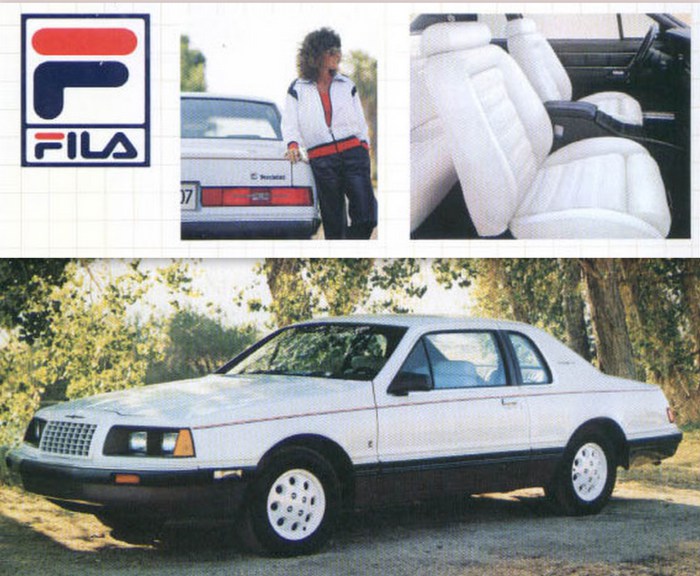 in 2003, Ford was celebrating its 100th birthday, so special centennial editions were on the cards. There were supposed to be 4,000 Explorers and Tauruses, and 3,000 of each Mustang, Focus, and Super Duty trucks (some of their best sellers at the time). As far as we know, quota was achieved on all but Mustangs of which only 2,040 were built. Following Henry Ford’s well known philosophy which implied that you can choose any color as long as it’s black, all centennial Fords were, of course, black. Exterior was also graced by 100th anniversary deck lid and side badges. Inside, Centennials got premium Verona-grain Imola beige leather. While you might find them available for sale in fine condition, don’t expect to get the commemorative key chain and watch, and “The Ford Century” – lavishly illustrated coffee book, which also came with the package. 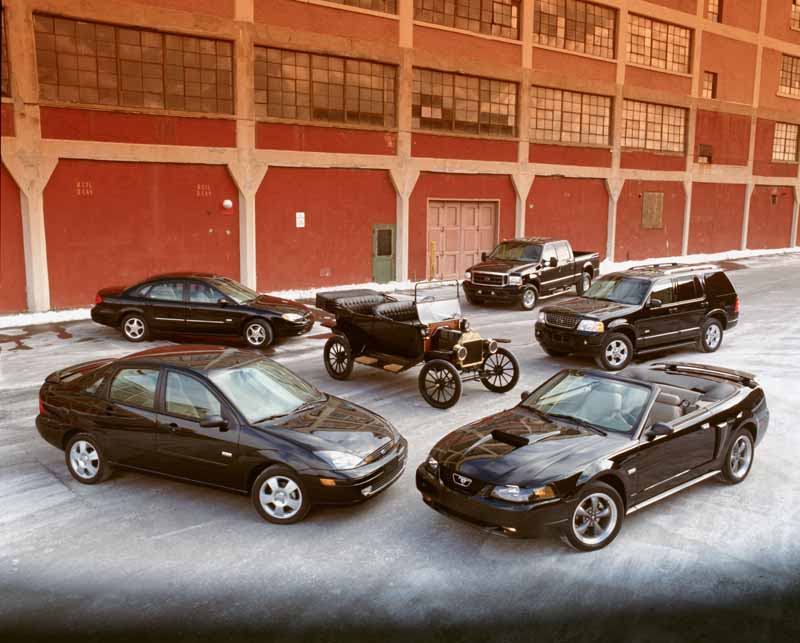 Back in early nineties, XLT Lariat used to sit atop the line of most Fords. F-150 and Bronco were some of them, but they also offered something extra for ’91 and ’92. It was the Nite package. Special edition was mostly cosmetic upgrade over already stacked trucks and SUVs. Black paint and trim, and special bodyside pink or blue to purple fade tape stripes were what’s distinguished the package. Forged deep-dish aluminum wheels, white-letter tires, sport suspension and standard 302ci V8 were also part of the package. Those lucky enough have found the rare 351ci V8 under the hood of their Nites. Unfortunately, Ford did not maintain production numbers for F-150 and Bronco Nite. 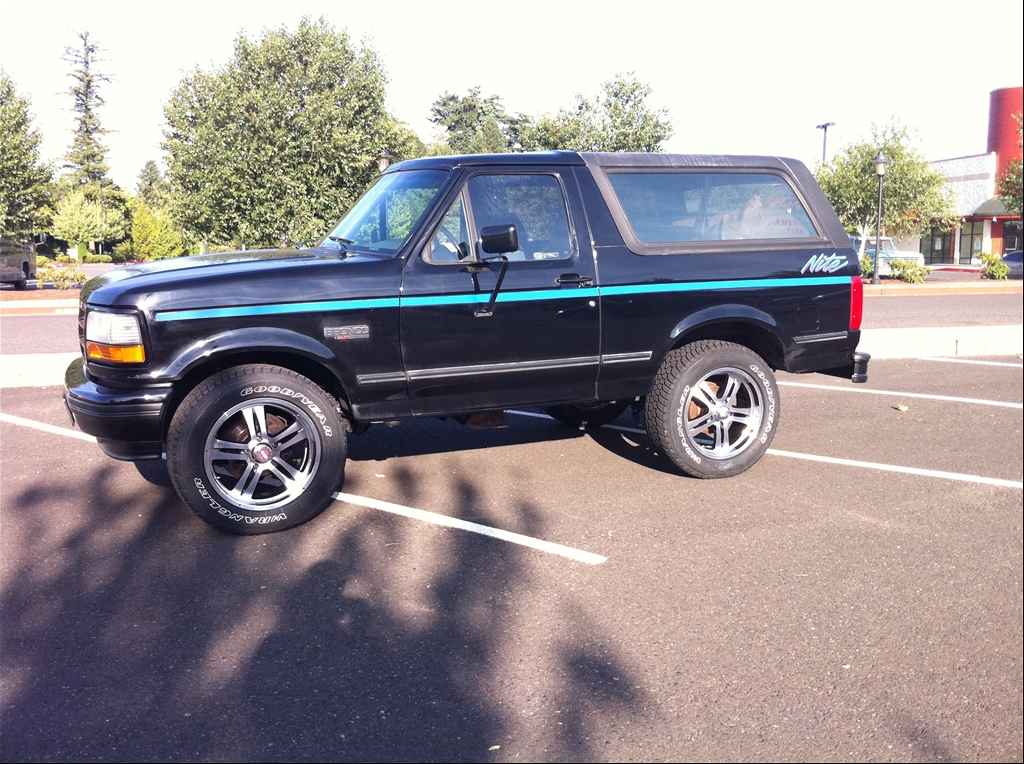 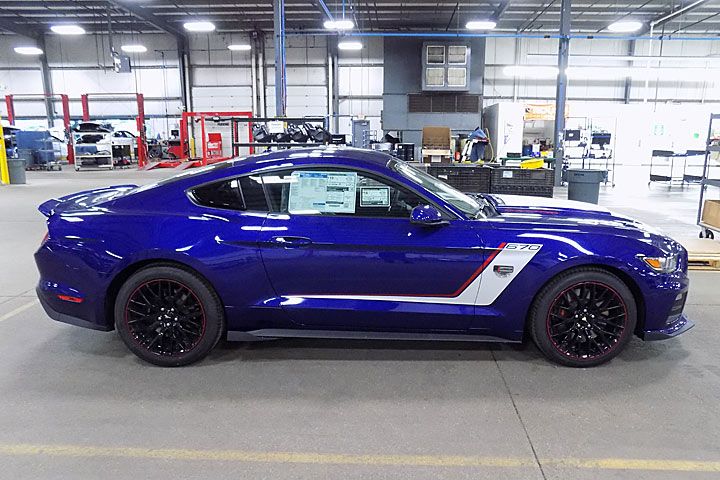 Ranchero too has its special edition. Rio Grande was a limited offering for 1969 and wasn’t much more than Ranchero GT. However, Rio Grande came with Grabber colors such as Wimbledon White, Poppy Red and Calypso Coral. Furthermore, it featured black vinyl roof, partially blacked-out hood with scoop, corresponding lower side stripes, chrome bed rails and unique wheel centers. Being a revamped GT, Ranchero Rio Grande offered 351ci Windsor V8 under its hood – either with 2-barrel or 4-barrel carburetor on the side. Total production numbers for this beauty are unclear, but Kevin Marti suggest only 816 of them were built. 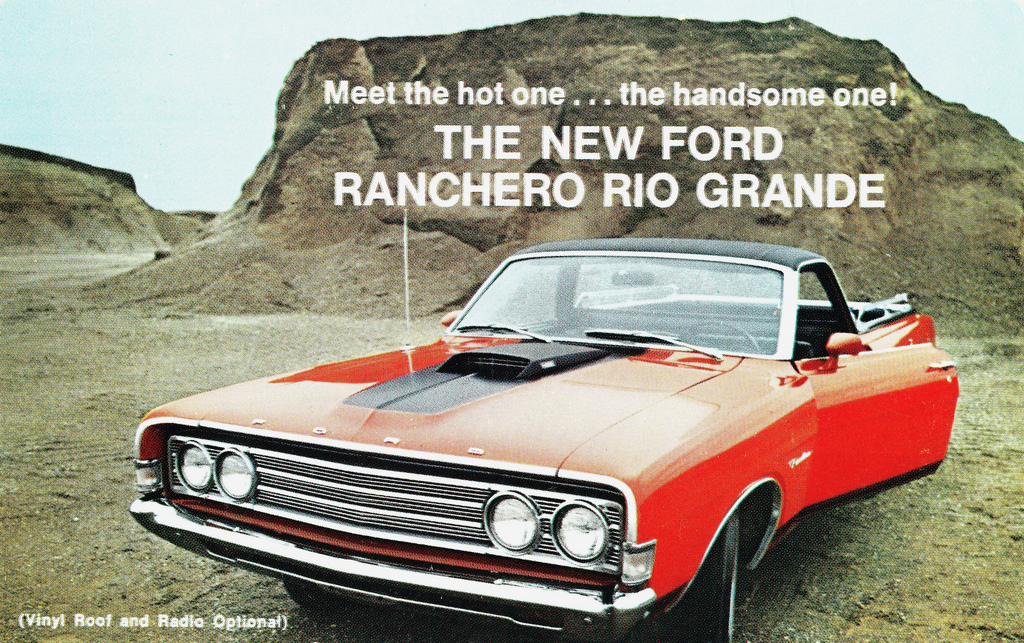 Officially released for 2009 and 1/2 model year, Iacocca Silver 45th Anniversary Edition Mustang was only made in 45 copies. All were painted in Lee Iacocca’s special silver and all were offered with 4.6L V8 under their hoods. However, apart from naturally aspirated models which churn out 320 ponies, there are also the supercharged few which make 400 horsepower. Iacocca Design 20-inch Chrome wheels, interior and exterior details, embroidered Diamond Design leather seats, and signature dash plaque with serial number are additional details. $ 89,950 sticker on a Mustang isn’t something that should be taken lightly, though. 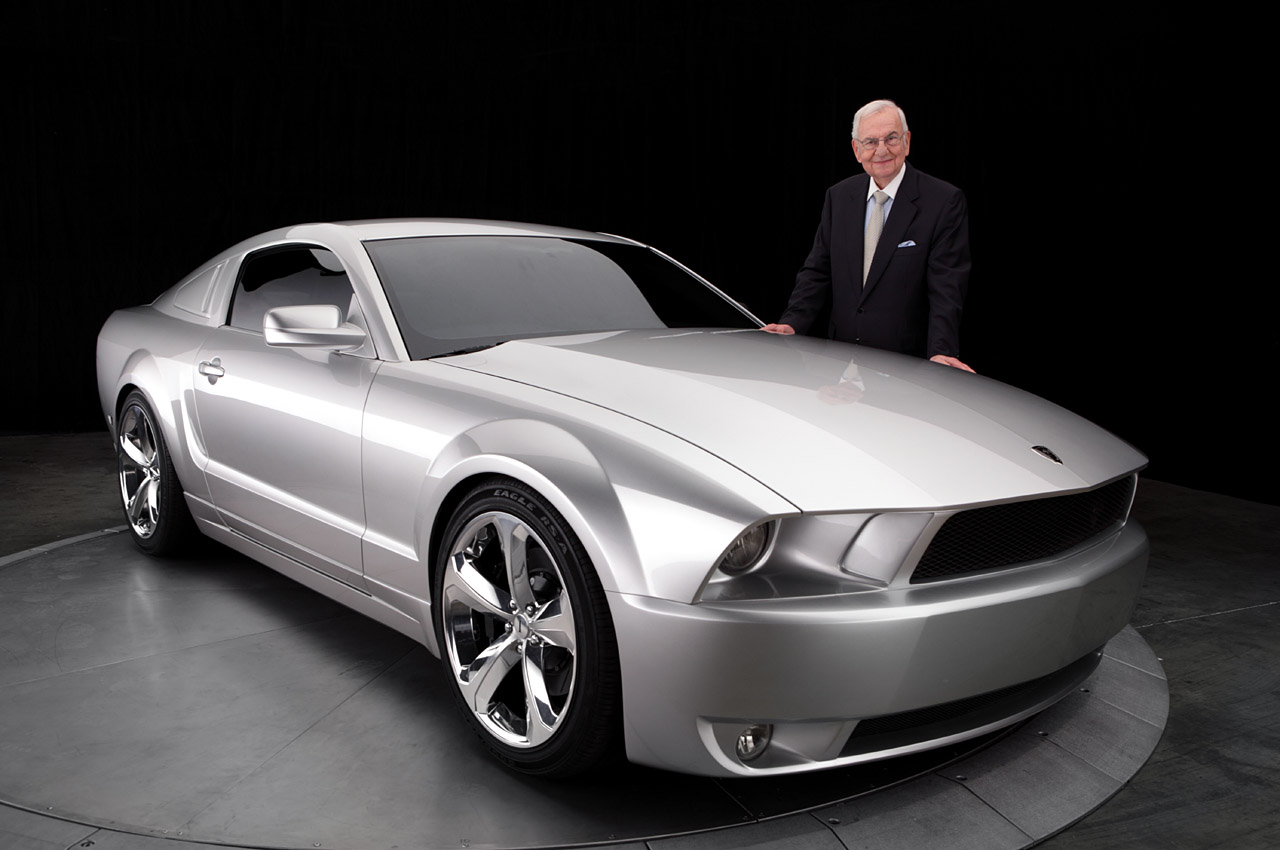