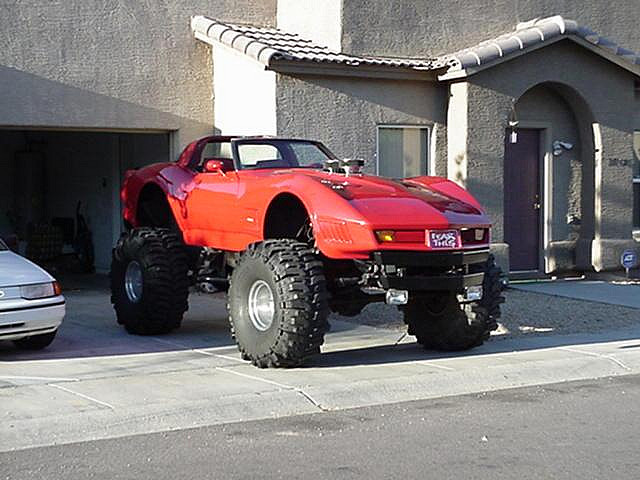 Modifying the suspension on a car or truck is a pretty common practice, and in most cases, looks pretty cool. However, there are some lifted rides that make about as much sense as lifted roller skates. These weird mods make you think anything from “why lift that car?” to “well, that’s just excessive.” Scroll down to take a look at ten of the craziest lifted vehicles on the internet. 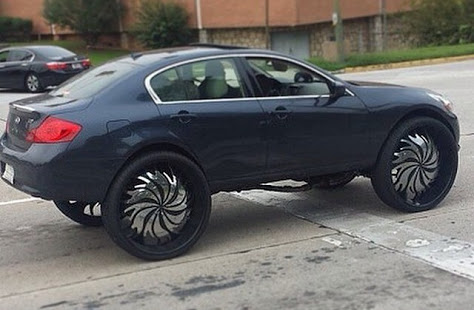 Ugly Lifted Cars That Have Gone Way Too Far

Some intrepid internet user discovered this beauty while out and about, making the wise decision to photograph it and post it online. Who lifts a Neon? It just doesn’t go, you know what I mean? The addition of a large spoiler doesn’t make it look any cooler, either. 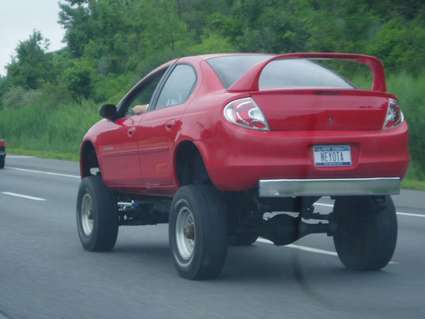 I just don’t even get this. It’s one thing to raise a truck a few inches, maybe even up to a foot. But this is just nonsense. How do you get in it? How do you even drive this thing? Not to mention that it seems like the wheels are just not sufficient to support this Erector Set. 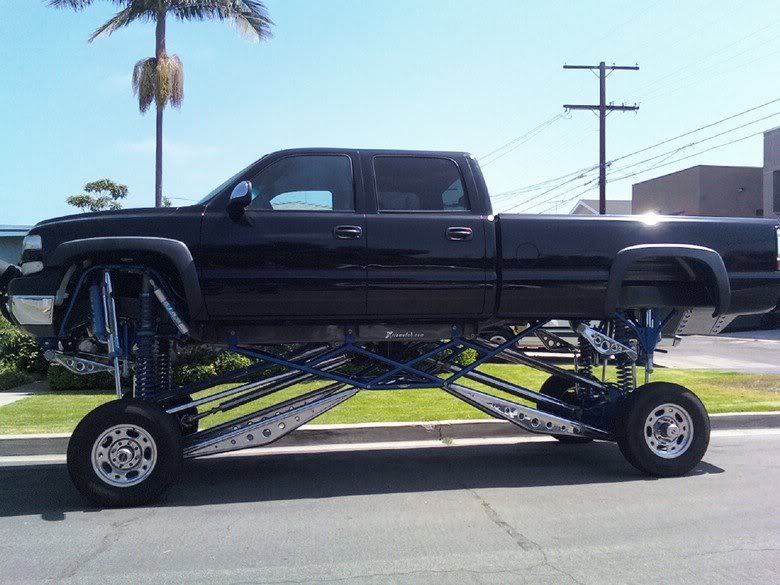 This is a lot of work and expense to put into something that looks like it was pooped out by a bigger, nicer car. I can only hope that the owner of this ride plans to use it as some kind of dirt-track race car and not a daily driver. 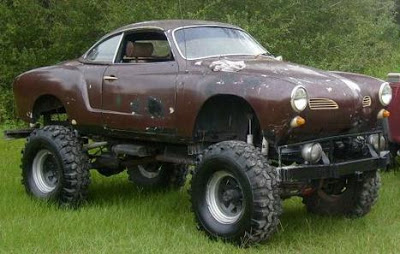 Ugh. Why? So many whys! First off, I could never understand why anyone would want to drive a decommissioned hearse, but raising it on giant tires? What? It’s not even a nice looking hearse. I’m so confused! 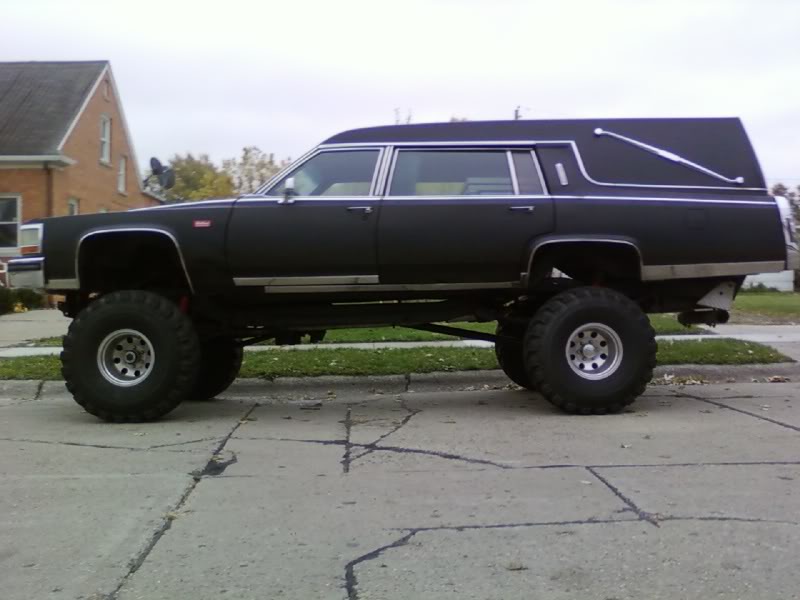 This is probably the funniest lifted ride on this list. It’s completely ridiculous, totally impractical, and may or may not be street legal. Though, it’s probably perfect for traversing bunkers and finding your ball in the rough. At least this might make golf interesting. 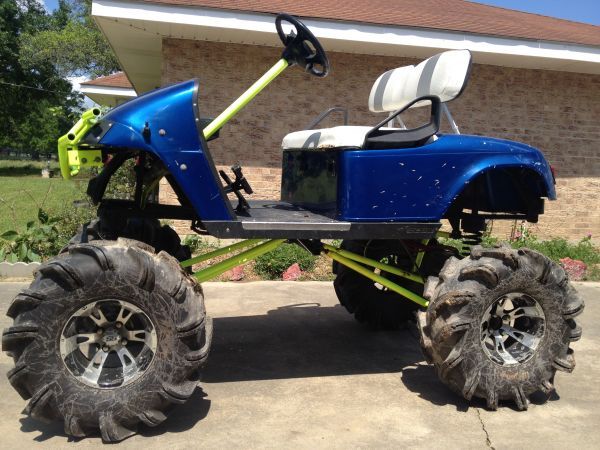 Whoever did this should be arrested. I mean, seriously. Who does this? The tires are bigger than the car! Look at the size of that driveshaft! I can’t make out the logo on the side of the door, but to me it almost looks like it’s some kind of official government vehicle, which would make this whole thing even weirder. 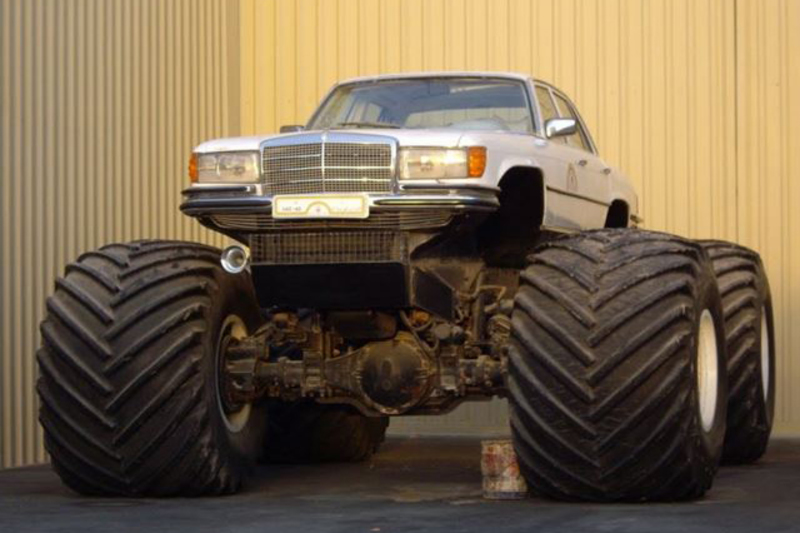 How dare you take this awesome ‘Vette and treat it like some 4×4 mudder!! The thing that surprised me the most was that this is not an isolated incident. There are people all over lifting their Corvettes. It makes me want to cry.

Okay, this one might actually be funnier than the lifted golf cart. A Smart Car with enormous tires would certainly be a sight to behold in person. But really, what’s the point? This is, basically, a lifted roller skate. 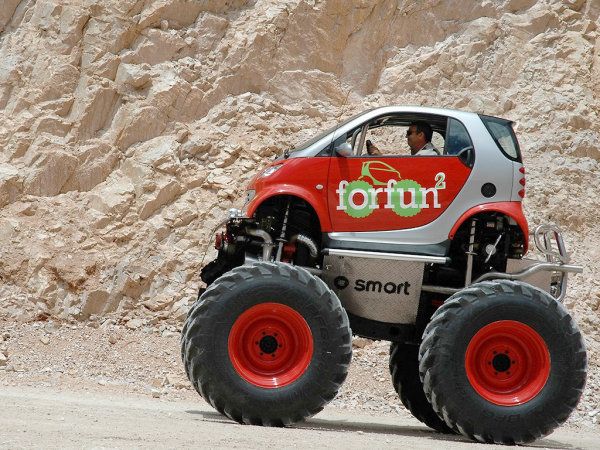 I don’t understand this at all. Like, not even a little bit. What in the world is happening here? Not only are these wheels just insanely huge, they have no tires. It’s like giant bike wheels. How the heck do those things support the weight of the car? And why on earth would you want your car to look this ridiculous? 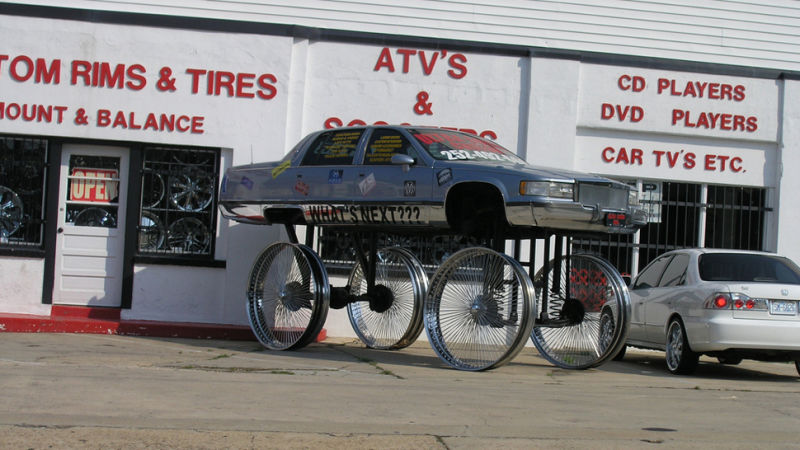 I do realize that this DeLorean hasn’t been tricked out to look like the time traveling version from Back to the Future (that would have made even less sense than it does as is). This poor winged machine has been turned into some kind of Mad Max style off-roader, and I don’t like it. There should be a law that all DeLoreans must be kept original, or given the Doc Brown treatment, and leave it at that. This is just nuts. Stop it, people! 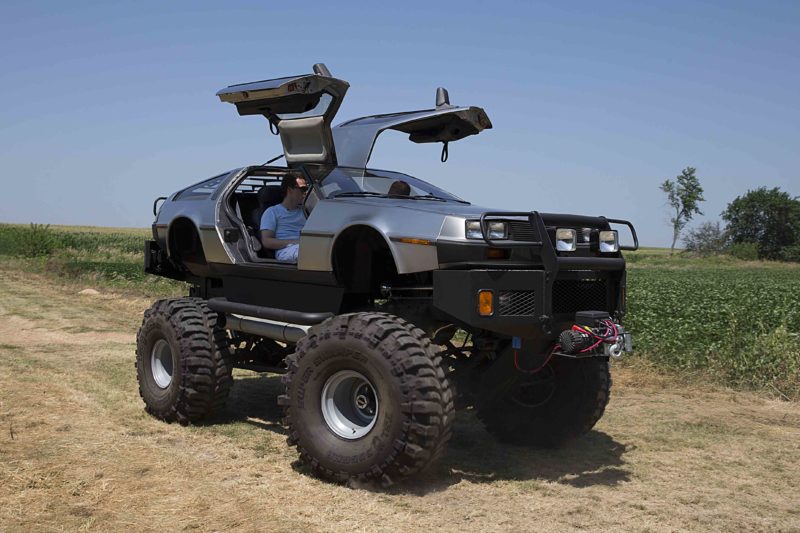 And How About 5 Epic Lifted Off Road Cars?!

A lifted 2017 Ford F-250 Super Duty Platinum Crew Cab might not be the most exotic thing on the list here, but it’s probably the most sane, the most subtle, and probably the wisest decision for anyone considering lifting a vehicle. If you like your lifted cars looking strange and bizarre, then take inspiration from the list above. If you like them looking classy and refined, and actually lifted for a real purpose, take your inspiration from this beauty. Or any Ford F-150 or F-250 that has been lifted responsibly! 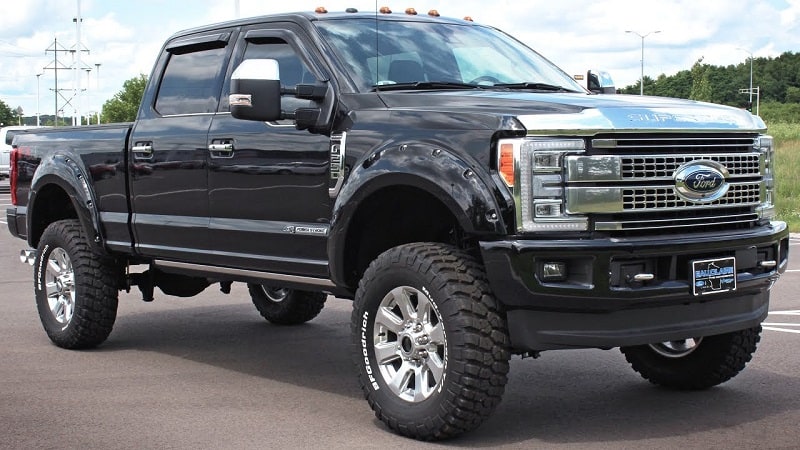 Now this is what a lifted off-road vehicle should look like. If you’re into lifted cars, then you’ve got to appreciate real lifted off cars like this. The legendary Land Rover Defender looks great when it’s packing a few more inches. Those extra 5 inches turn the Defender from an already capable off-roader into a lifted car with superior wading capabilities, serious under-body ground clearance, and something so badass it doesn’t even need mentioning 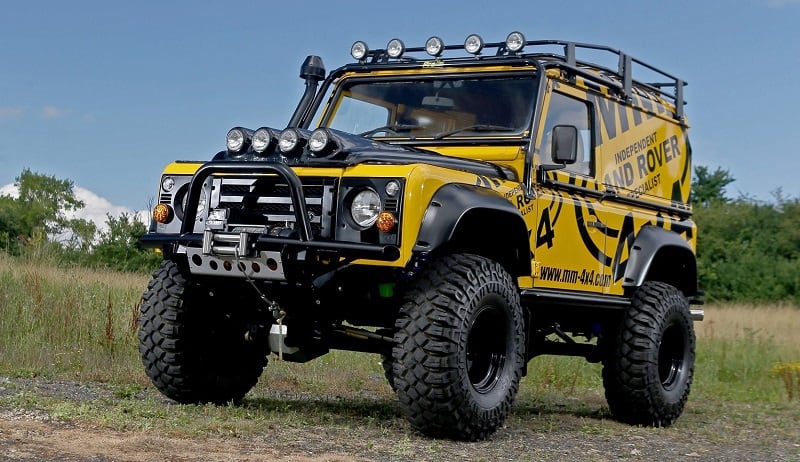 What about this 1967 Chevrolet Camaro called “Zorro”? You’ve seen lifted cars, but what about lifted muscle cars that look like they’re outfitted to wreak havoc, cause trouble, and scorch tire marks across the face of a post-apocalyptic Earth? If that’s the kind of vehicle you can see yourself driving then give Francisco “Zorro” Cervantes a call, because he’s the man who built this absolute stunner. 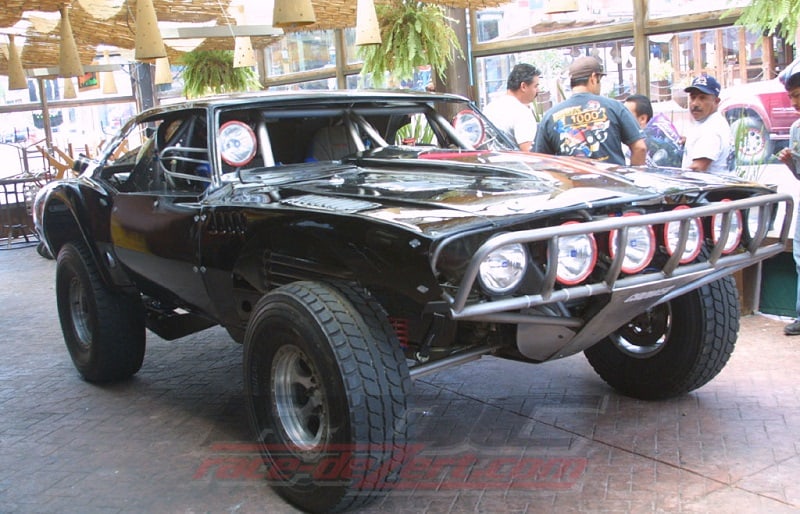 If you think the most recent iteration of the legendary Toyota Supra wasn’t quite aggressive enough, then how about this? Ok, it’s not a real life car, but it is a stunning rendering from designer Rain Prisk, who has taken the new Supra and turned it into a totally different beast. It’s not that road focused Japanese beauty anymore – instead, it looks like it could tackle the most feared off-road races in the world. Cool? Well, that’s a matter of opinion, but we think it looks great as a rendering. We’re not sure if we’d go through the hassle of building one in real life though! 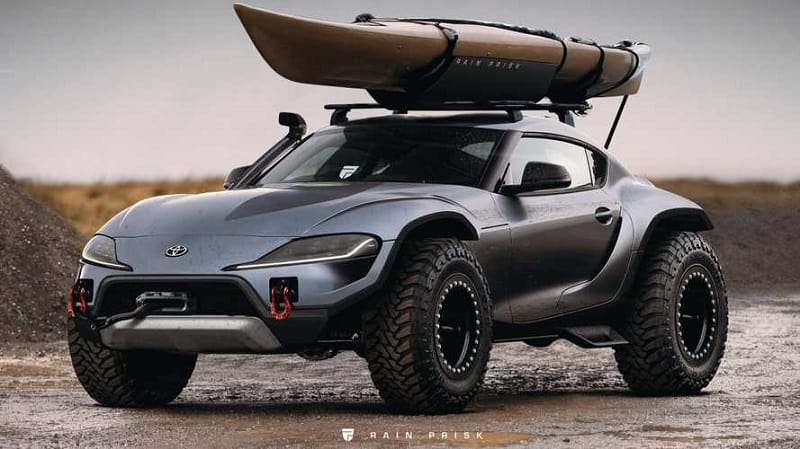 Lastly, you have to be in awe of this amazing Porsche 911. As lifted cars go, this one is truly one of the best. It’s rough, it’s rugged, it has some seriously beefy tires, plus ropes and a pickaxe, and if that wasn’t enough, it says “booby” on the top. What more do you want? Is this the greatest of the lifted off cars you’ve ever seen? We’re inclined to say yes! 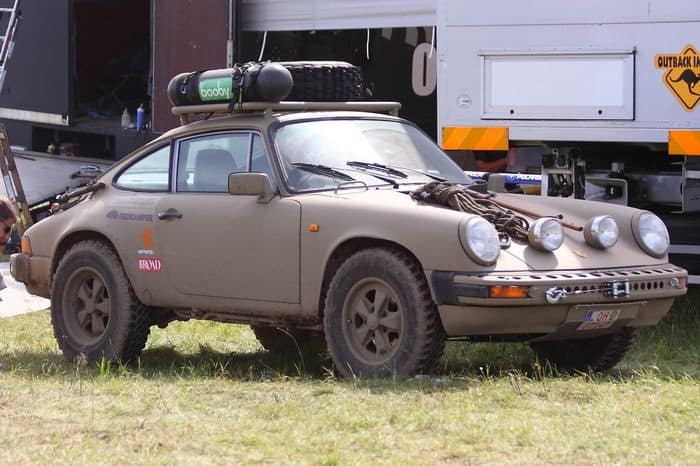 
R34 GTR Z-tune #01 Owner Looking to Sell for $1 Million?
The Best of 2021 Rolls-Royce
22 of the Most Beautiful Wedge-Shaped Supercars Ever Made
5 Certifiably Insane Engine Swaps That'll Have You Shaking Y...
10 Nice Cars that are Also Cheap
15 Of the Best Looking Digital Gauges Ever Offered in a Car ...