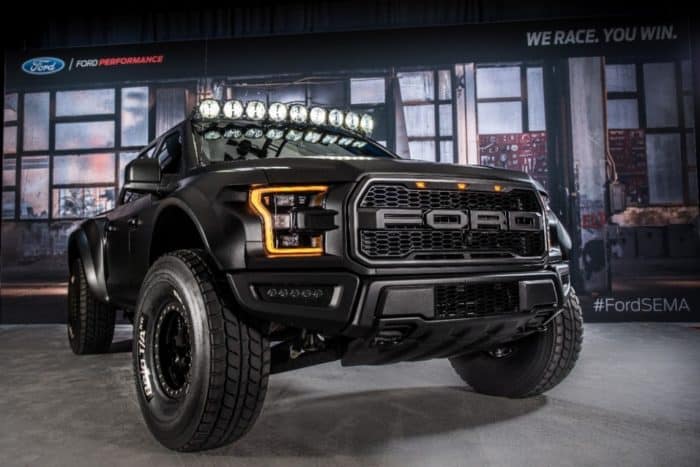 Year in, year out, SEMA draws some of the brightest automotive minds in the industry. Between November 2 and 5, Las Vegas Convention Center was again the venue of the premier automotive specialty products trade event in the world. It drew around 100,000 domestic and international industry leaders from more than 100 countries, and more than 60,000 buyers. But, to put things simple, we know SEMA by pristine restorations, often ludicrous resto mods, and overall nurturing of American car industry’s spirit. This time we’re reflecting on 15 of the most interesting pickup truck concepts and modern custom pickups from the SEMA 2016 show. Stay tuned for our SEMA 2016 vintage truck edition as well.

The same Super Duty Ford pickup that first appeared at Discovery Channel’s “Diesel Brothers” has now found its way to the SEMA 2016. 2011 F-350 goes by the moniker “BroDozer”, and with good reason at that. It’s yellow, huge, and it sits on 54-inch Baja Claws tires and military axles. Couple that with 6.7L Powerstroke diesel V8 mill and you’ll see why it’s one of the most imposing vehicles from this year’s show. It does suffer from one of the most useless beds pickup truck could have been fitted with, but BroDozer wasn’t made for towing. It was built for off-roading. Moreover, it’s listed for sale at $99,000 with 29,000 miles under its belt. 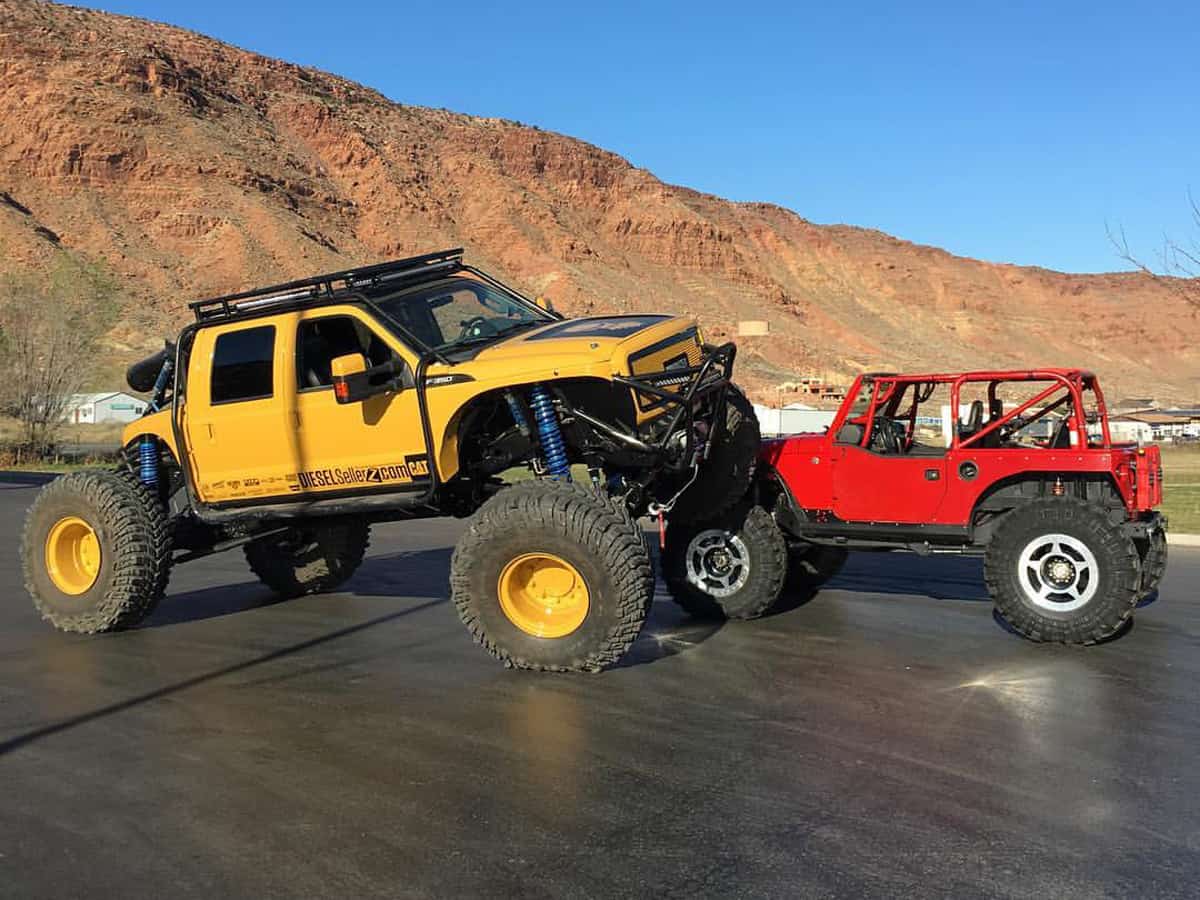 Ford Super Duty pickups were under the spotlights at the SEMA 2016 which is understandable due to the new lineup debut that’s closing in. Fabtech-built 2017 F-250 SD Shockzilla is more than a simple heavy duty truck, mind you. As its name suggests, Shockzilla features Atlas shocks which allow it no less than 15 inches of wheel travel. 6.7L Powerstroke diesel engine is additionally inspired by a Whipple supercharger, CGS Motorsports exhaust, and K&N filter. Fabtech claims there’s $165,000 invested in it which will certainly be a repellent for most potential buyers. Still, there aren’t many off-road/workhorse pickup combos better than Shockzilla out there. 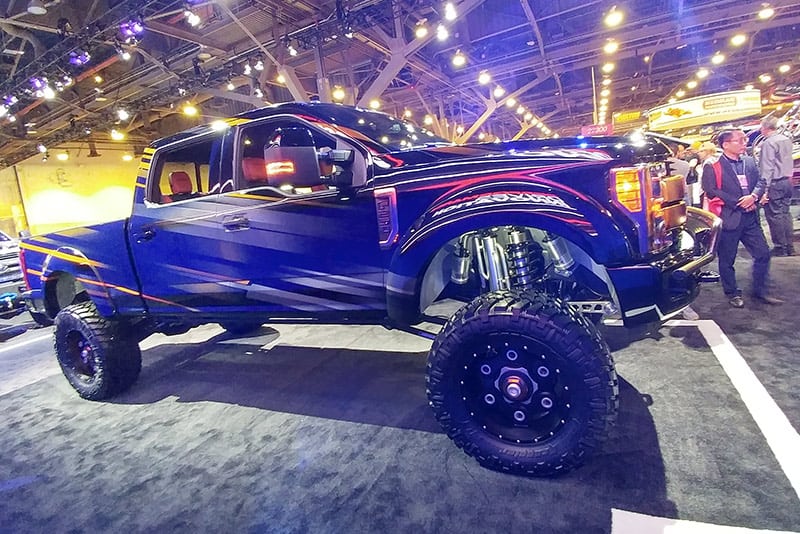 Collaboration between Chevrolet and one of the most famous surfing brands – Hurley – has brought us the ultimate surfer’s wet dream truck. Seafoam Green concept from SEMA 2016 rides on Goodyear Wrangler DuraTrac tires that encircle 17-inch blacked-out wheels. Given its purpose, Colorado Z71 Hurley comes with right-front fender snorkel for water wading. Back rear, under that Bimini-style bed cover, you’ll find Thule storage tray and surfboard rack that atop of it. Even its interior is furnished with water-proofing in mind. Seats are covered in ventiprene which dries quicker than you can say “hang ten”. Other than that, it’s a regular 308 horsepower, V6-powered Colorado Z71. 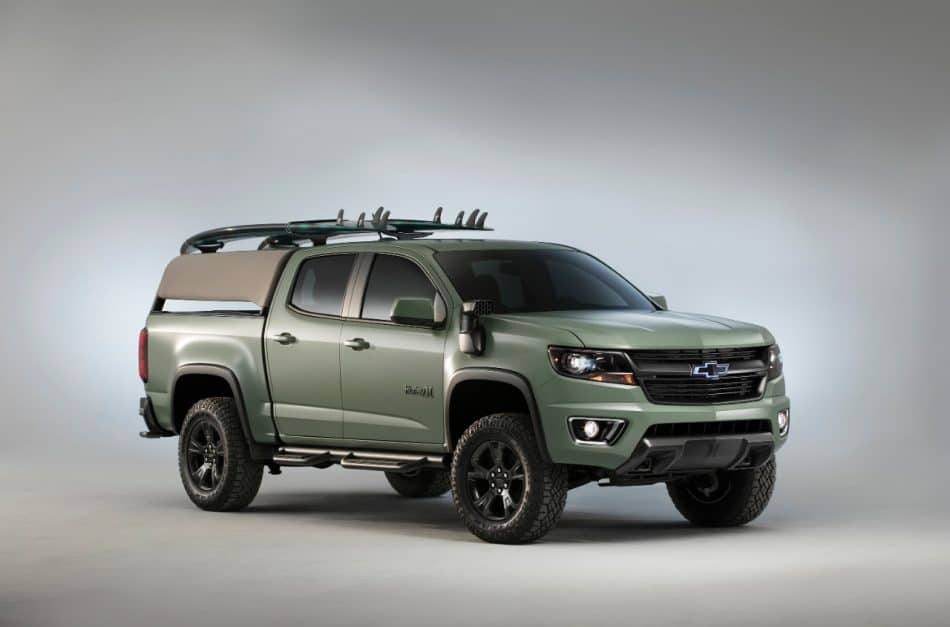 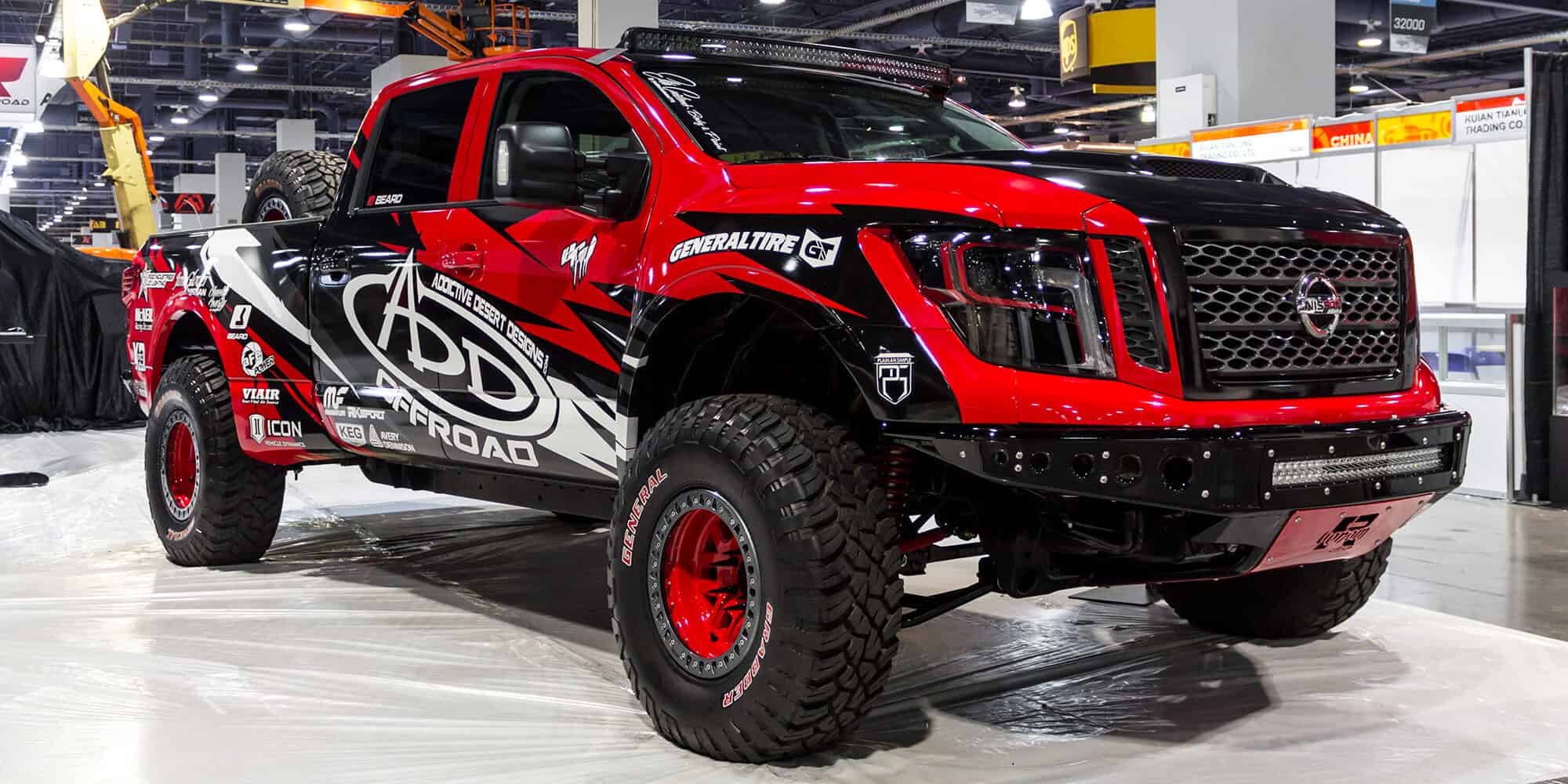 Addictive Desert Designs F-150 Raptor, on the other hand, was built specially for the Springfield Armory. Apart from exquisite Kryptek Camo wrap, AR500 armored HoneyBadger plating, Fox shocks, BF Goodrich tires, HoneyBadger front and rear bumpers and chase rack, and Alcon brake kit, most of its parts have been provided by ADD. These include Rock Slider side steps, and intercooler relocation kit among others. Springfield Armory Legacy Edition is rounded off by multiple Foutz Motorsports interior gun mounts in equally impressive interior. 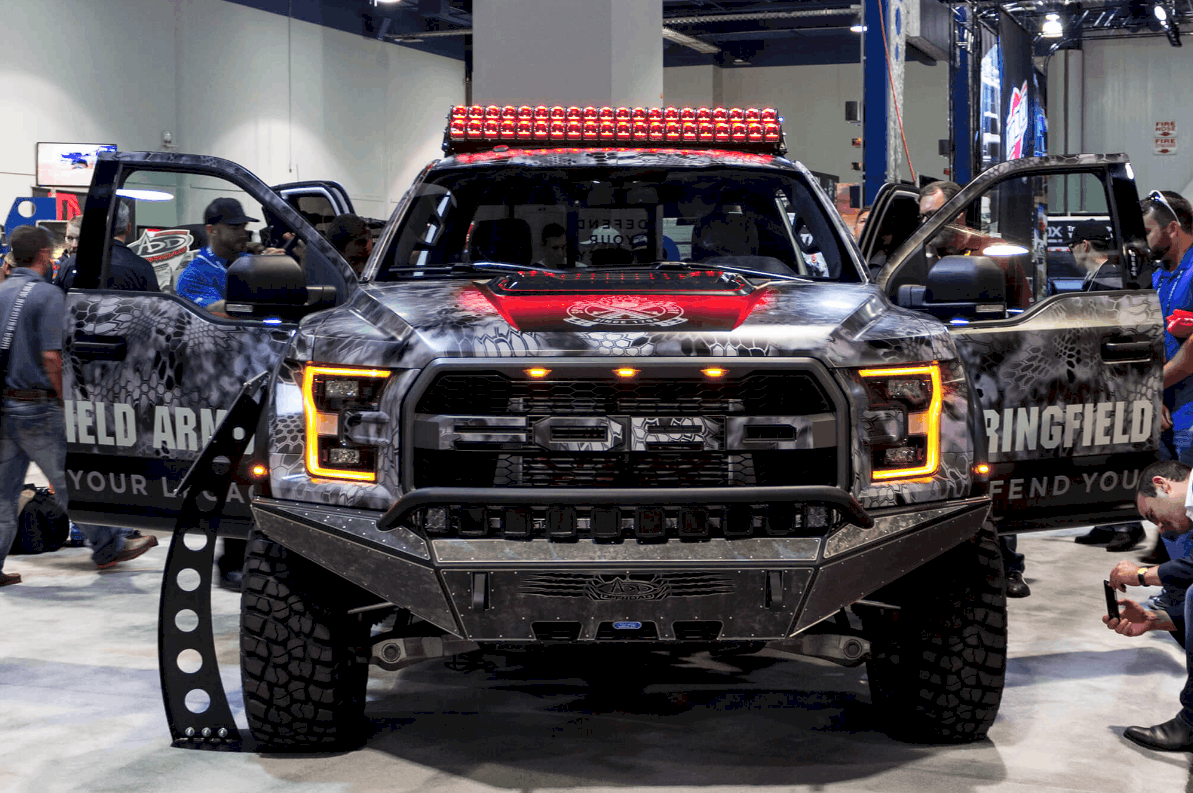 Here’s another custom concept based on the upcoming redesigned Ford Super Duty. This one has been conceived by MAD Industries and built upon F-350 SD Dually platform. Pitch Black BASF paint seamlessly strikes fear into ongoing passers’ bones. As if truck’s sheer dimensions weren’t enough! And it’s mostly stock, with Gibson 4-inch stainless dual exhaust, Crown suspension, and Deaver Springs U-bolts and blocks being some of the precious few aftermarket parts in it. Of course, there are those one-piece, 19-inch Fuel off-road wheels with a custom 8-lug pattern and Fuel off-road Gripper AT tires as its centerpieces. 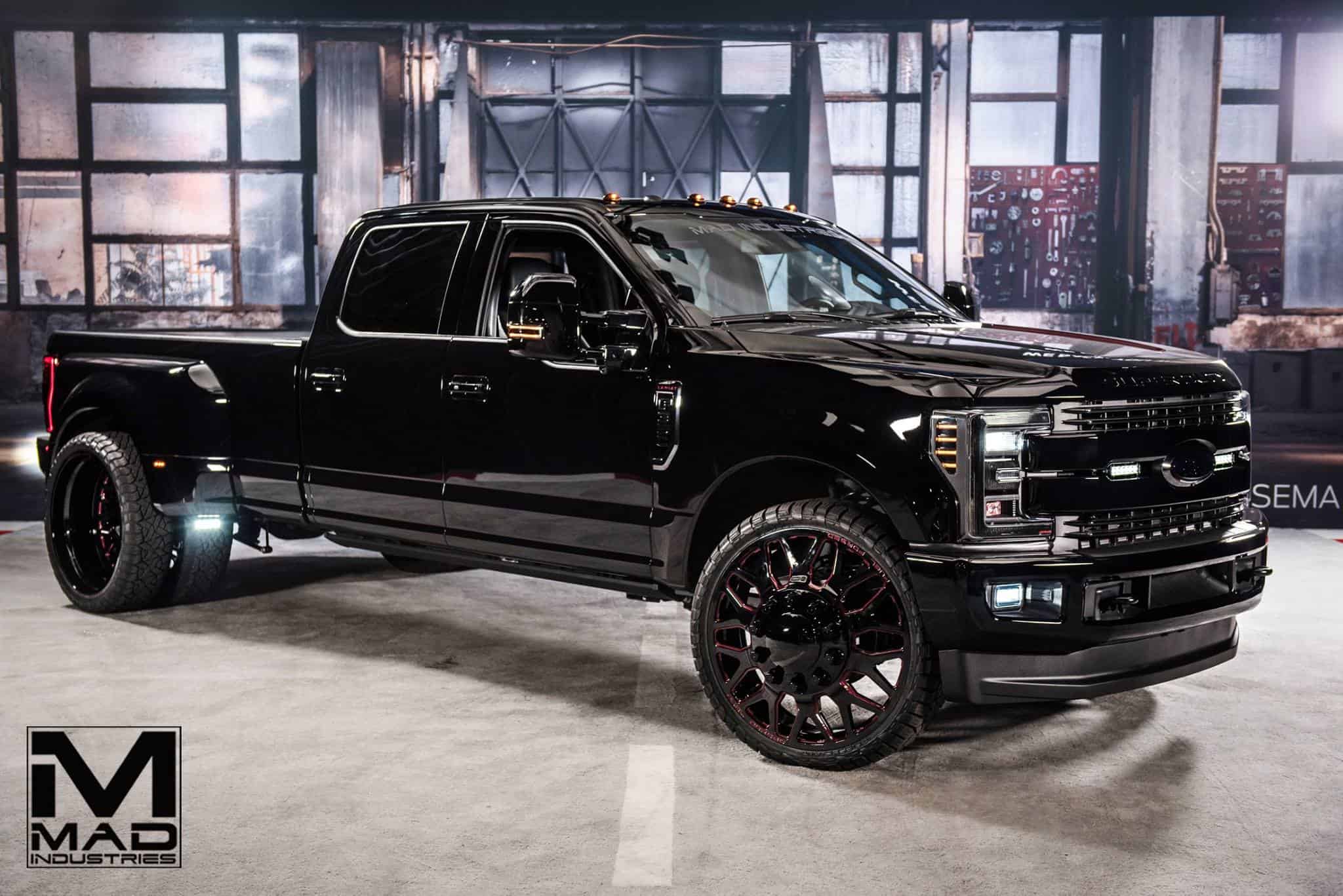 Unveiled only month or so ago, Chevy Colorado ZH2 Concept has now made its first public appearance at SEMA 2016. Built for military use, this hydrogen-powered fuel cell pickup serves as a preview of a possible future. The FCV was built on beefed up mid-size pickup chassis, while riding on 37-inch tires and special suspension. Apart from being one capable off-roader, Colorado ZH2 has additional no-brainer advantages that military could utilize. Near silent movement, reduced thermal signatures, instant torque, and Exportable Power Take-Off unit (EPTO) which allows remote use of the fuel cell shouldn’t be disregarded. And it comes in special military camo theme, but that’s hardly a surprise. 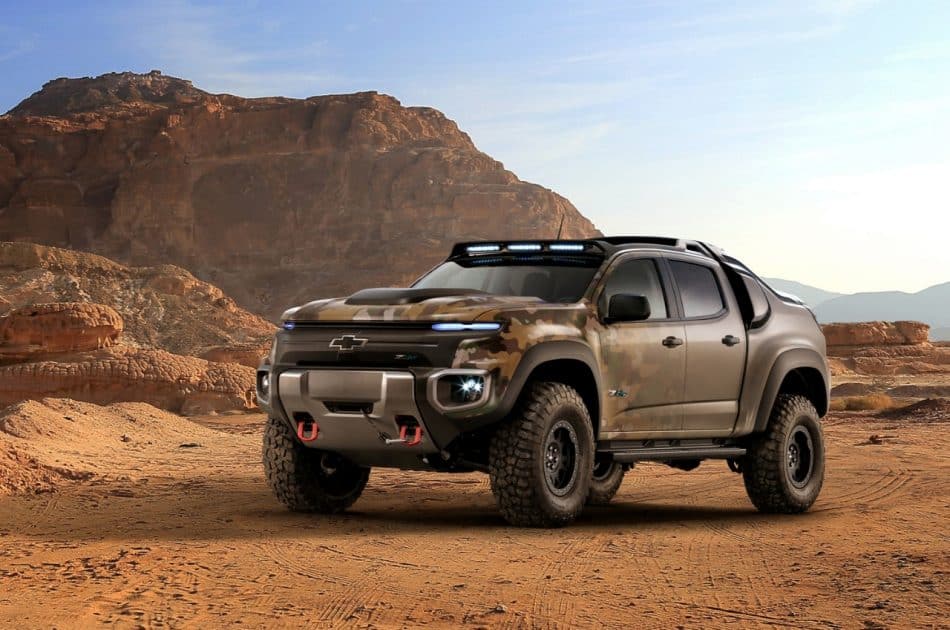 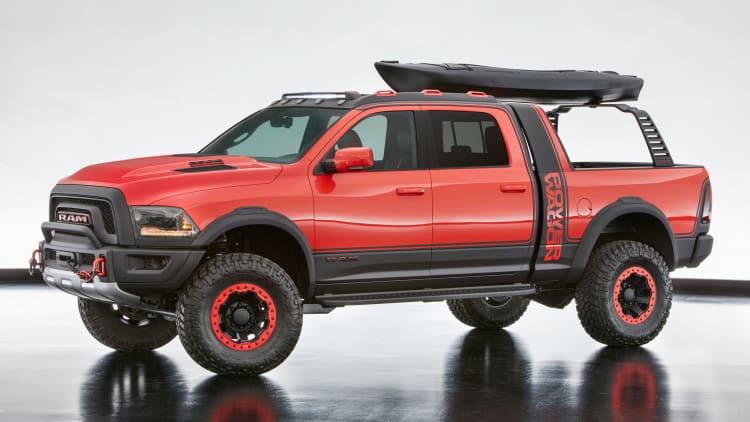 This one hasn’t been completed yet, but when it finally gets finished, it’ll be one hell of a truck. Silverado Heavy Duty starts off with Battleborn 1150 front differential which should be capable of handling no less than 3,000 horsepower. It also has immense tires, and equally huge King race shocks. Full chromoly steel chassis gives it a unique aura worthy of its luxury demeanor. Finally, this Battleborn 1150 differential test mule is fitted with Duramax 6.6L diesel V-8 engine with Allison transmission. Will it actually cost more than $1 million remains to be seen after its completion. 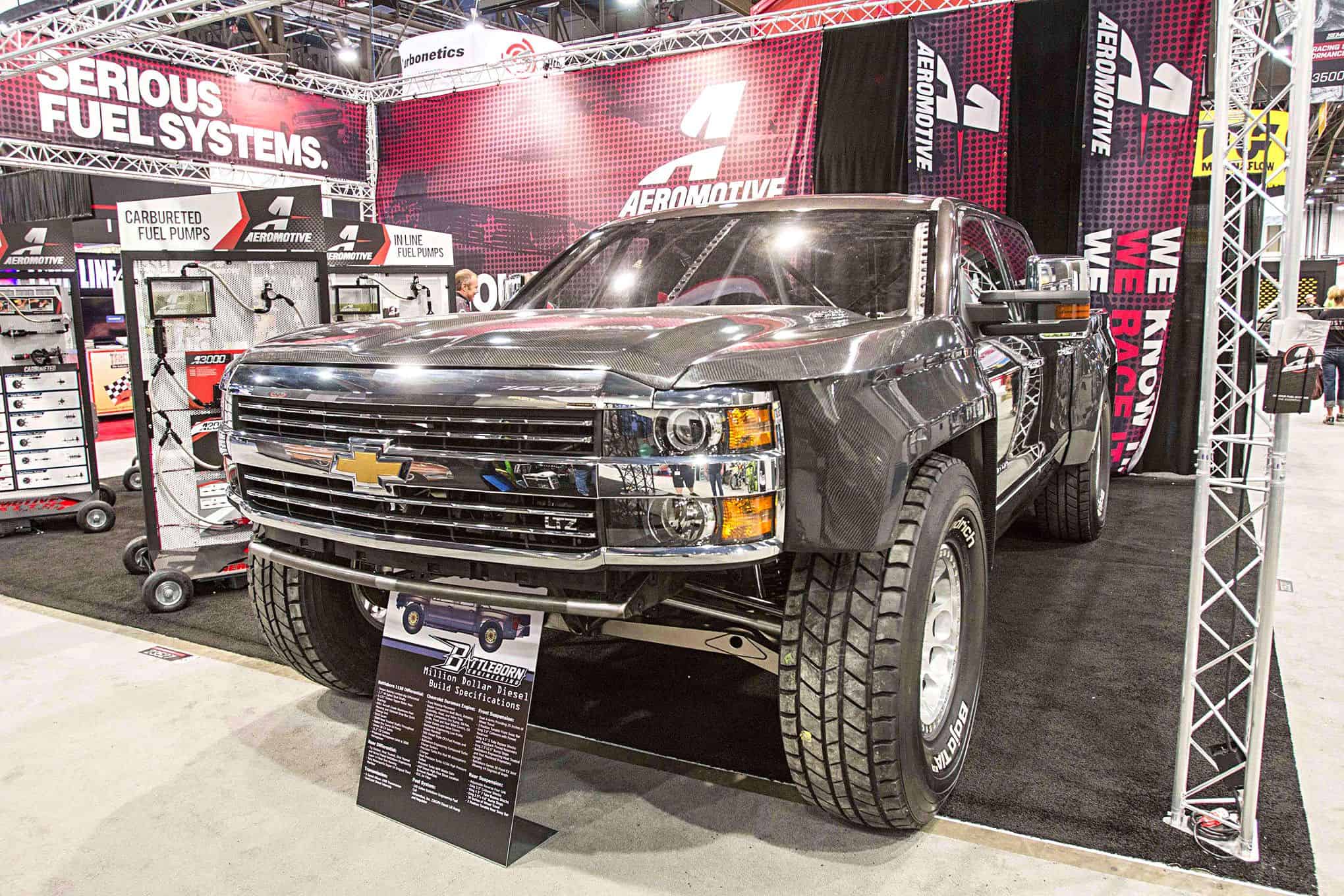 Half the list could have gone on Rolling Big Power pickups which have mesmerized most of SEMA 2016 visitors. They brought eight utterly fantastic trucks, but we had to make our choice. This 2012 Toyota Tundra is owned by Jared Cotter and was built by Bare Bone Kustoms. It’s as customized as it gets. 6-inch Skyjacker suspension lift, BASF Carisma paint, Kicker audio, Plash LED lighting, Katzkin leather interior, Magnaflow exhaust, etc. It even gets the customized 2014 Tundra frontal fascia to make it fresher than the original. Maybe they’ve gone over the top, but people at RBP certainly know how to build a great custom pickup. 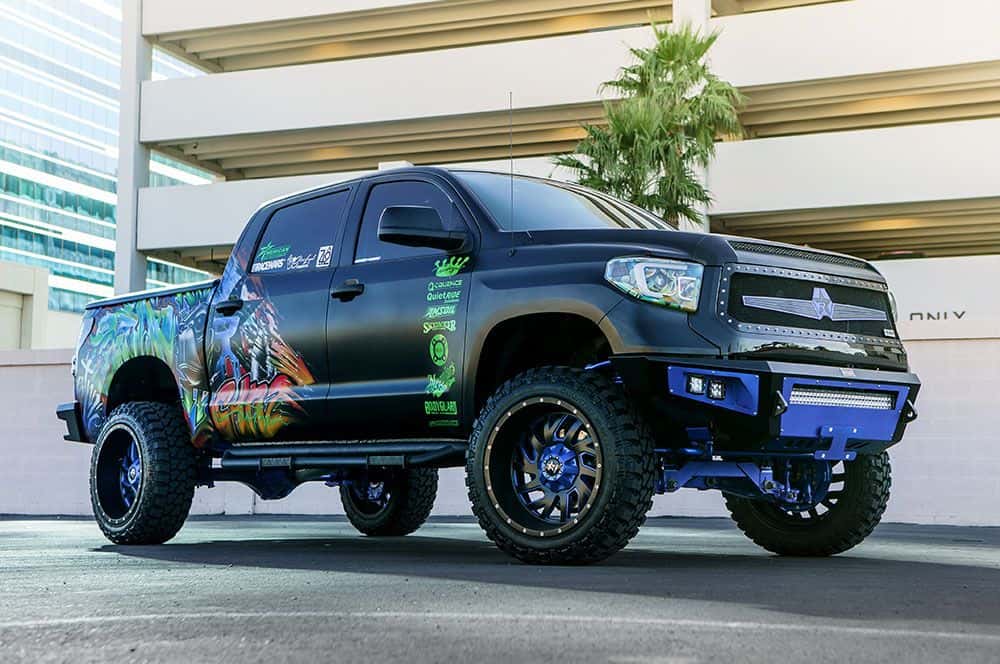 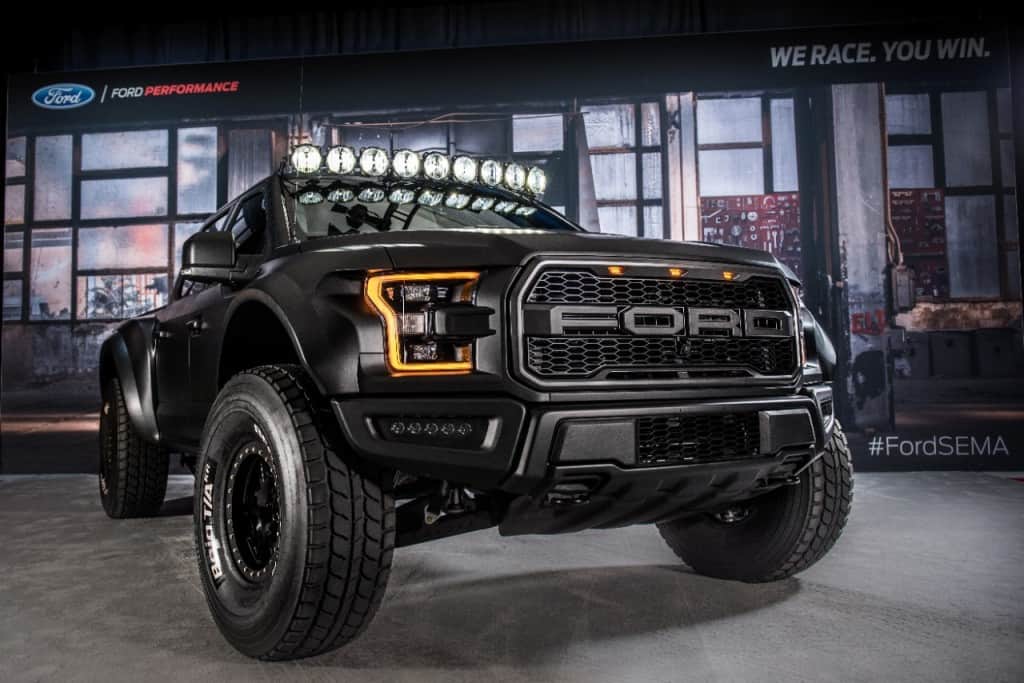 With 127 years in the industry, Carhartt is currently one of the most experienced workwear outfitters there is. Their delicate touch couldn’t have avoided SEMA 2016, and we’re glad it didn’t. For it gave us superbly refined Chevy Silverado Heavy Duty with triple-stitched leather inserts inside and two-tone exterior (matte satin graphite paint above the Carhartt-gold pinstripe and gloss metallic black below it). Although flashy and plushy, Carhartt Silverado is still a worker’s truck. Don’t believe it? Check out its improved 445-horsepower and 910 lb-ft of torque Duramax turbodiesel V8. 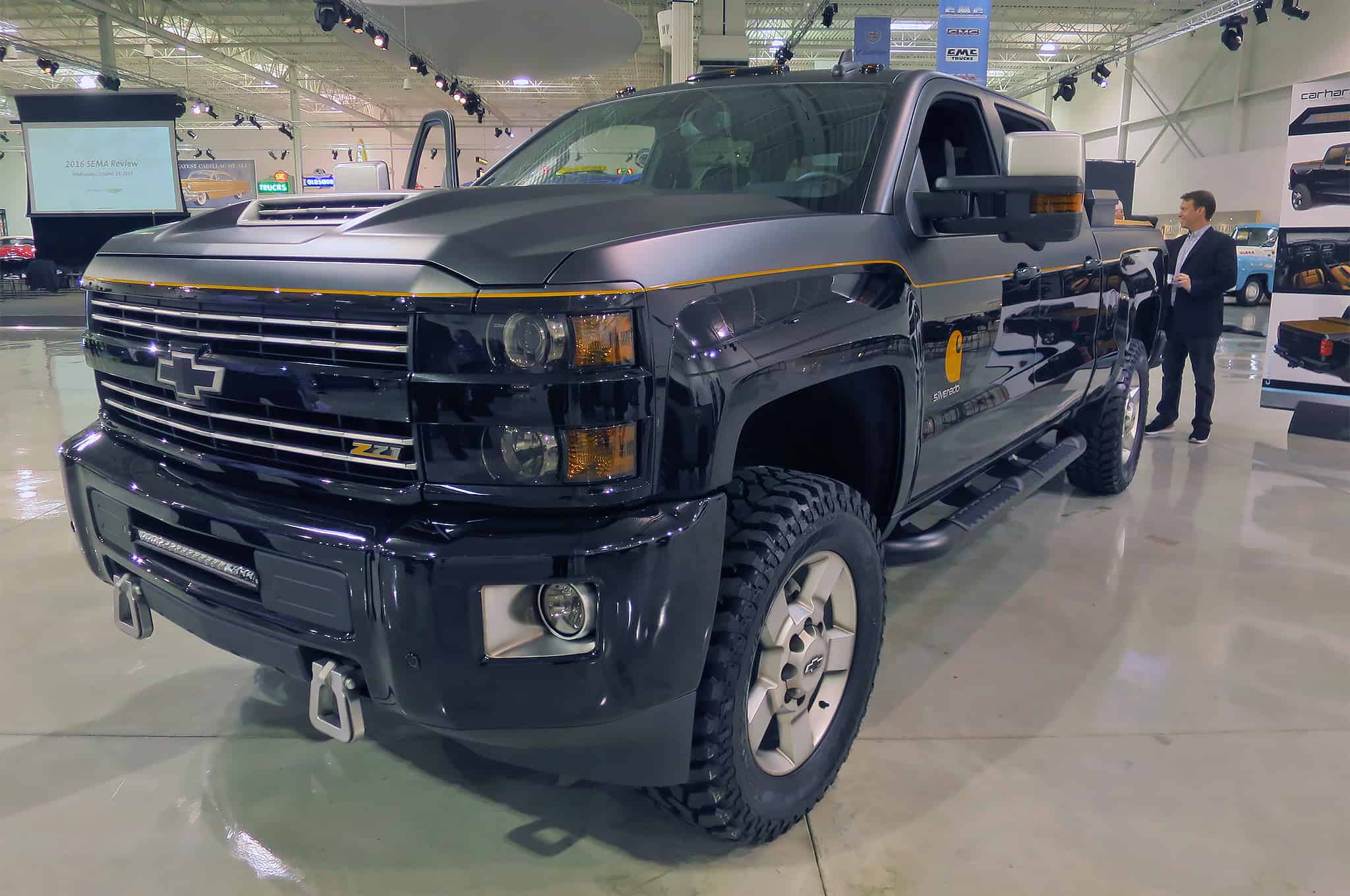 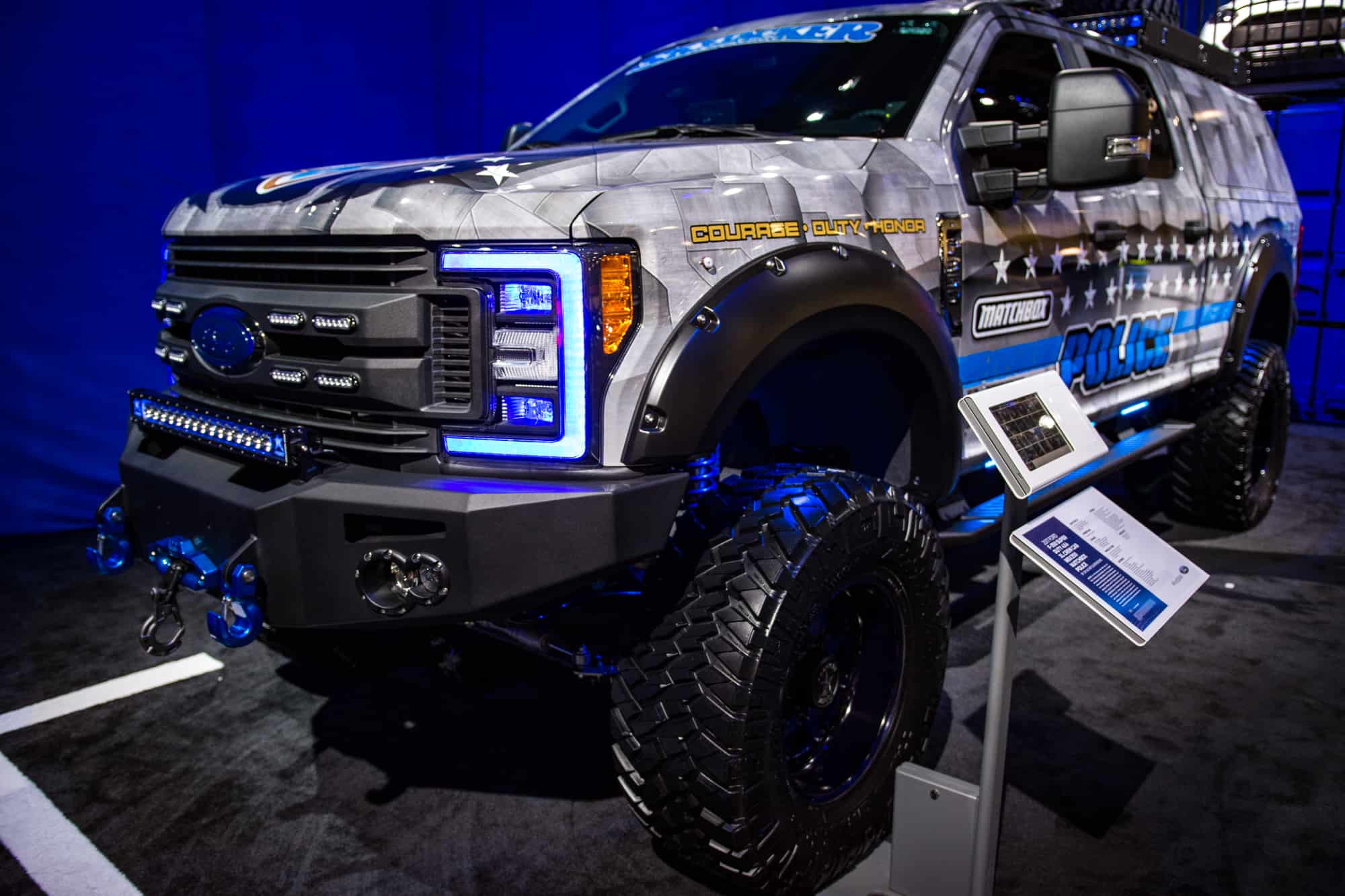 We couldn’t simply stay with only one RBP truck, couldn’t we? This 2014 RAM 2500 Mega Cab belongs to Blaine Hann. Extremely high setup features 8-inch McGaughy’s lift kit and Dirt Logic shocks with 3 inches of lift. Enough to fit 40-inch Interco tires and 22-inch RBP Glock wheels to it. Like a true tuner car, RBP RAM 2500 comes away with C4 lighting down under. Retro Shops headlights, BodyGuard A2L front and rear bumpers, Cargo Glide box organizer, and blinding white paint round up the outside. Interior, on the other hand benefits from Roadwire upholstery and JL Audio. 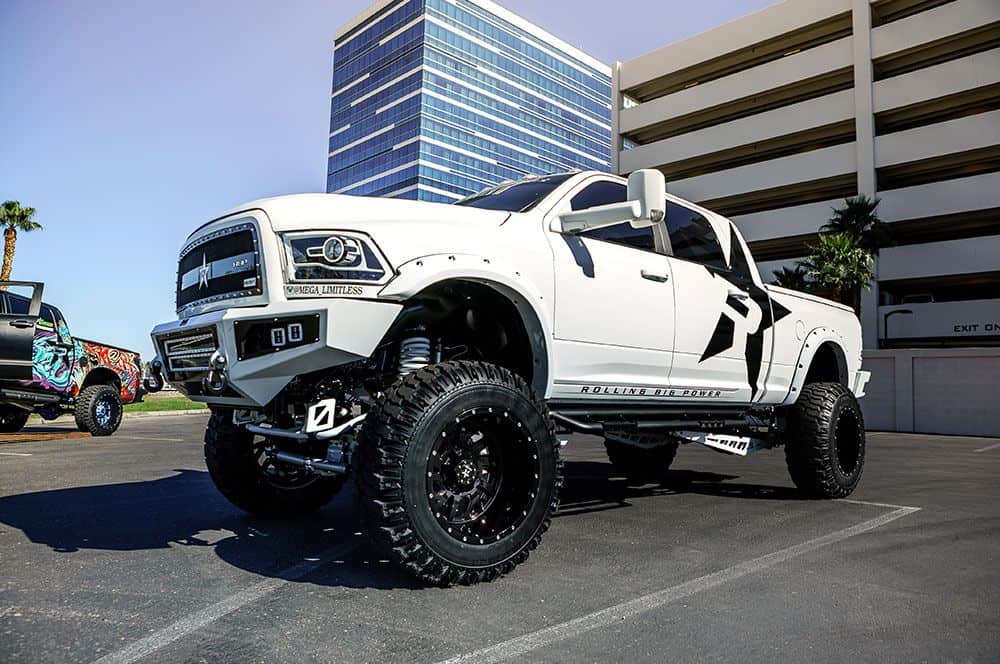 New F-150 Raptor is a perfect opportunity for Blue Oval to return to Baja 1000 series, and it seems they think the same. In fact, Greg Foutz is pushing it through its paces in Baja Stock Full class as I’m writing this. This SEMA 2016 Baja 1000 Raptor is basically stock, with precious few differences compared to dealers models. Roll cage, race seats and harnesses, Rigid Industries LED light bars, and a puncture-resistant fuel cell are the only real differences. These and the  unique paint scheme. 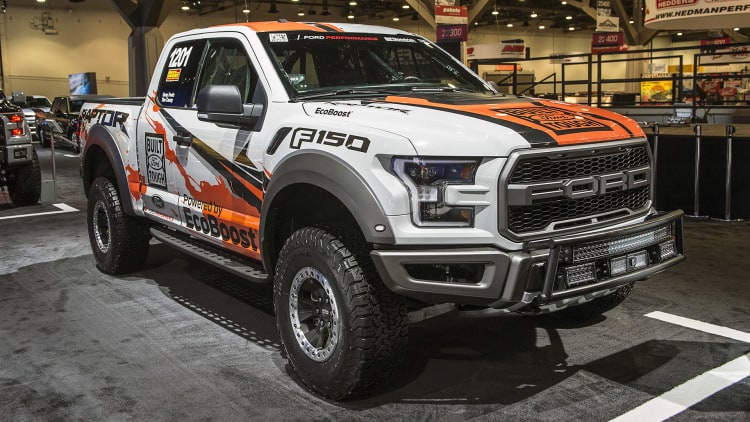 
Ford Performance Parts Winch By Warn Now Available For Most ...
Digital Extremes: New Study Finds Motorists Have a Love-Hate...
The 7 Most Enormous V8 Engines Ever Built By Ford
10 Emerging Collector Cars That Are Starting To Increase In ...
10 Best Used Trucks Under $10,000
Arizona Auction Week 2021: Big Changes At Iconic Auto Event