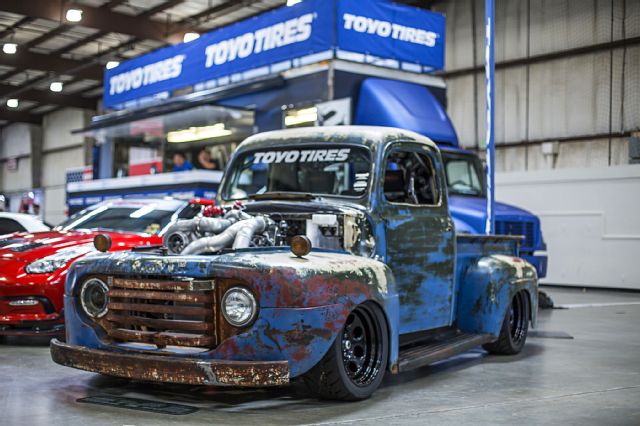 After the recent list of most outrageous modern pickup truck concepts and custom pickups, it’s time to wade through some of the baddest vintage pickup truck resto mods of the SEMA 2016. Seeing restored classics warms every car enthusiasts heart, and Specialty Equipment Market Association is one of the best places in the world to admire such works of art. Enjoy these top 15 resto modded classics as much as we’ve enjoyed bringing them all together for you.

Feast Your Eyes On These Awesome Restomod Trucks!

Five R Trucks out of Golden, Colorado are responsible for this original Dodge Power Wagon restoration. They first built the truck for Lifted Life TV season finale, but it also found its way to SEMA 2016. It’s got 5.9L Cummins diesel straight-six powerplant which gives it plenty of power to compete with pretty much all modern trucks. It might not come in classic red, but grey-black-yellow combo suits it just fine nevertheless. Nitto tires wrap up the forged American Force Wheels, while BDS takes care of the suspension. Rigid Industries takes care of the LED lighting and Memphis Audio does the same with speakers. Don’t know about the brand new snowmobile on its bed, though. 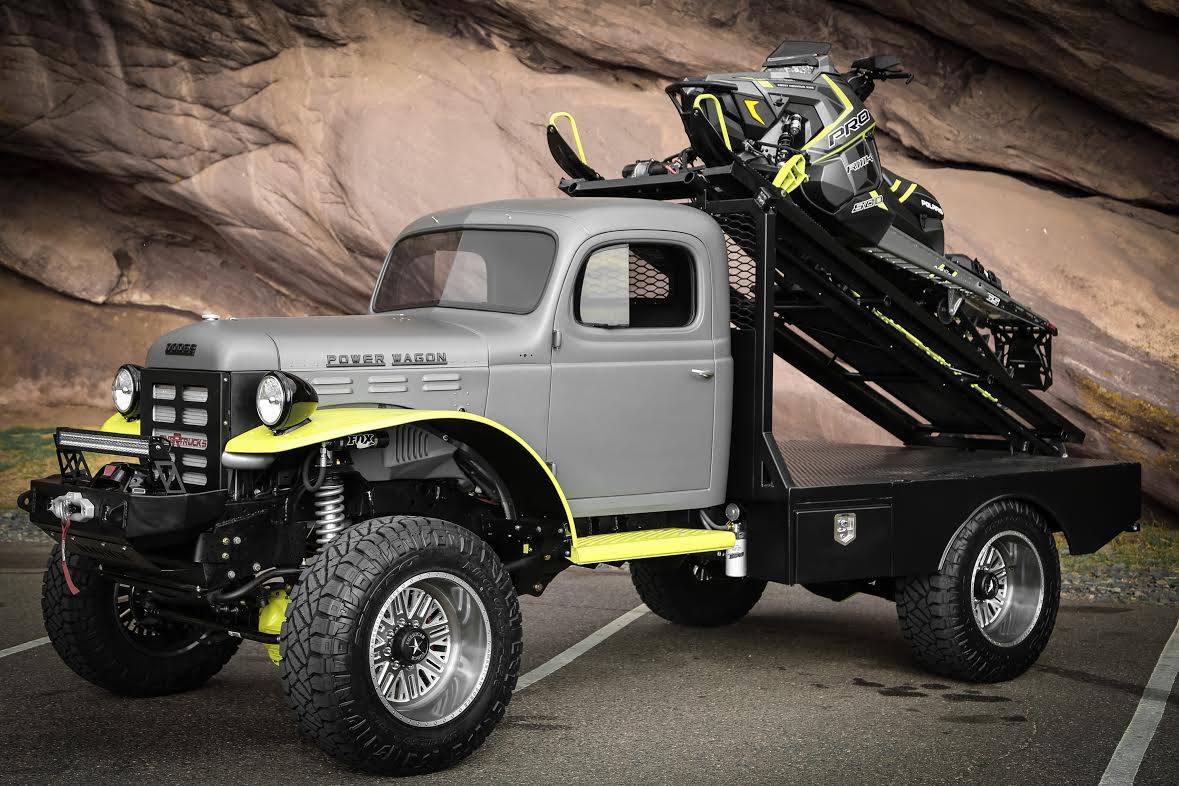 Diamond T was one of the premier light duty heavy hauler truck builders until the company’s demise in 1966. Weaver Customs out of Utah have decided to pay their tribute to one of military trucking pioneers. Not only that, but they’ve piggybacked their Diamond T hauler with equally ludicrous rat rod. “Long Haul” is powered by 24-valve Cummins diesel engine making 600 horsepower. Extreme amount of power is routed to the wheels via Dodge 48RE manual tranny.

1940s one and a half ton Dodge truck sitting on “Long Haul” is dubbed “Six Pack”. For a good reason. It’s got six nitrous bottles bottles on its bed, ready to launch it straight to the Moon. 12-valve Cummins diesel and dual ATS turbos are good enough for 1,300 ponies, but mentioned nitrous raises the total above the 1,500 hp mark. Simply put, sick! And, in case you’re wondering, the paint job is actually natural patina.

1980-1986 Ford F-series is rarely chosen for restoration builds, but this example shows that it can be on par with any other classic truck. This “Bullnose” is even more special thanks to the heart beating under its hood. 4.6L Modular V8 straight out of 2008 Crown Victoria P71 Police Interceptor tends to make any car somewhat special. Pristine exterior looks even better lowered the way it is, but this pickup’s main ace is its interior. After all, it’s been sitting in TMI Automotive Interiors booth. Low back bucket seats, dash and steering wheel are all covered in brown leather with tan suede inserts.

Here’s another classic pickup truck from SEMA 2016 TMI Automotive Interiors booth. Chevrolet C10 restored by Tre 5 Customs features state of the art interior with brown leather sport bench with Houndstooth Inserts. Door panels, dash and steering wheel follow the same pattern. On the outside, this Tre 5 Customs C10 features lowered white body with ochre cab and wheels, and wood-covered bed. They simply don’t get much better than that.

SEMA 2016 isn’t “8 Dollar Corn’s” first public appearance. You could have seen it at 2016 Detroit Autorama among other places. Korek Designs have really outdone themselves with this one, and it gets extra points for being anything other than Ford, Chevy or a Dodge. This sublime International Harvester L-110 truck is, however, motivated by the Ford Boss 302 engine. Tremec 6-speed manual routes all that Boss makes to the wheels. If you haven’t noticed, it also combines the long bed and stepside setup, and does that superbly. And that Brandy Wine PPG paint, and beige interior and bed floor! Simply beautiful. 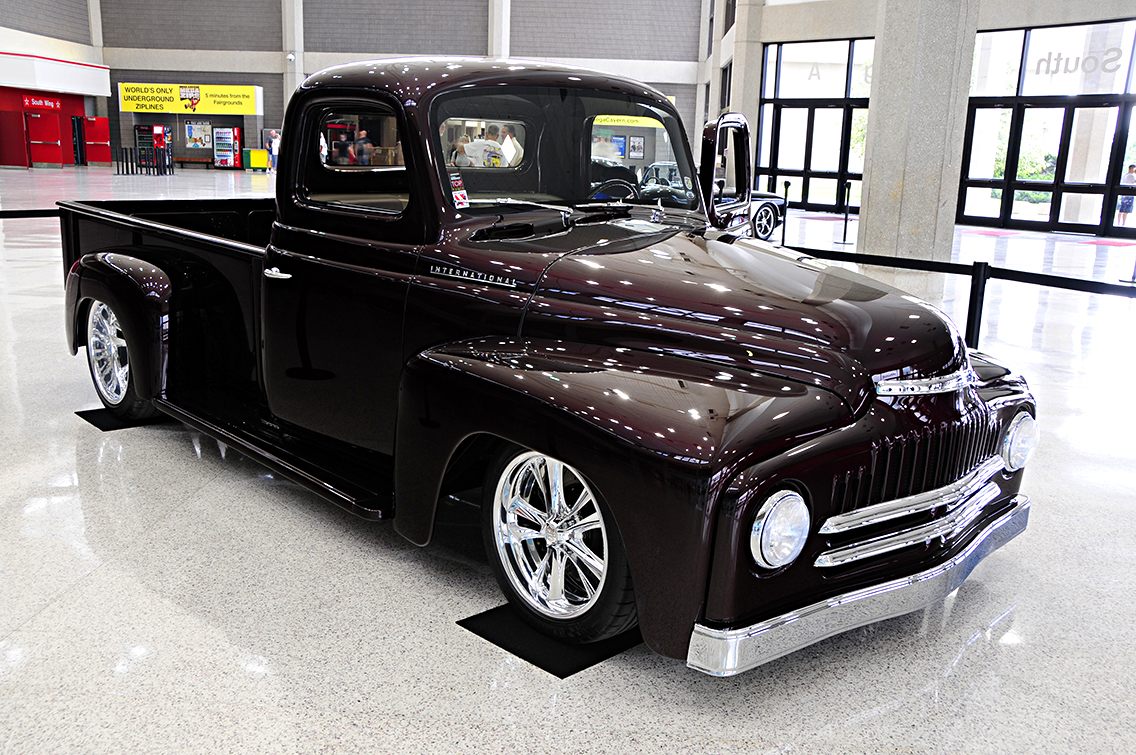 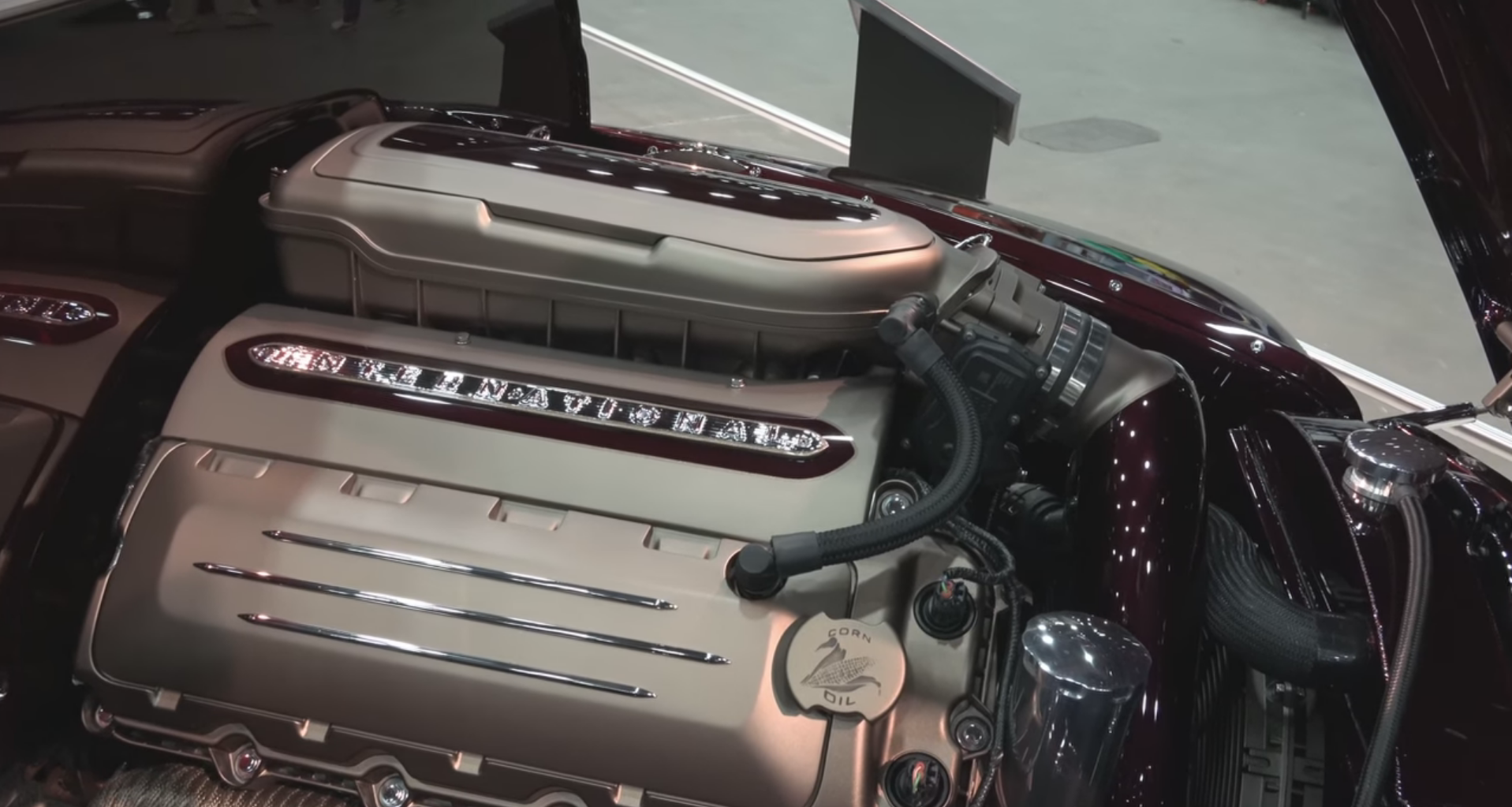 Weren’t able to gather much info on it, but still couldn’t let it end up staying anonymous. This 1932 hot rod Ford truck hides 1956 Mercury V8 engine behind that exquisite handmade grille shell. In other words, it has the 312ci Ford Y-Block mill behind there. Although rather small and minimalistic for today’s standards, its interior is quite interesting. Not much happening there, but 1932 Chris Craft speedboat dash grafted into stock one can’t remain unnoticed.

Didn’t get much about this one either, but it’s so wicked it hurts. This high-stanced custom mashup features 40-inch tires and monster truck-worthy suspension. It’s evidently a sixth generation Ford F Series truck cab that sits on this unconventional undercarriage, but Bronco has had its fingers involved in the mashup too. Not many better off-roaders out there. Especially if you need to run over some cars in order to get to the back roads. 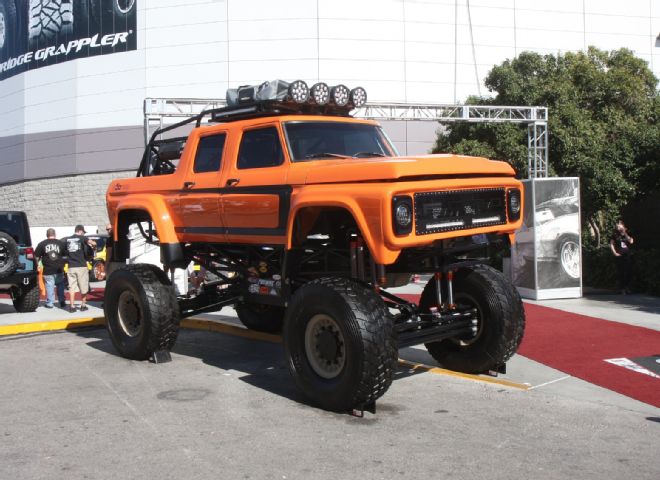 They might be good at making toy cars, but this fully restored 1947 Chevrolet Advance Design truck is anything other than a toy. Commissioned in order to commemorate brand’s 70th birthday next year, Chevy truck was restored by Dave’s Garage in Simi Valley, California. As you can clearly see from Tonka’s hood, it’s powered by 6.7L Cummins turbo diesel in-line six engine. Bed Wood and Parts are responsible for its wooden bed and rails, while Diamond Black Classics are responsible for those whitewall vintage tires. People at Tonka are planning on touring it throughout the entire 2017 and what’s left of 2016, so this probably isn’t the last time you’ve heard something about it. 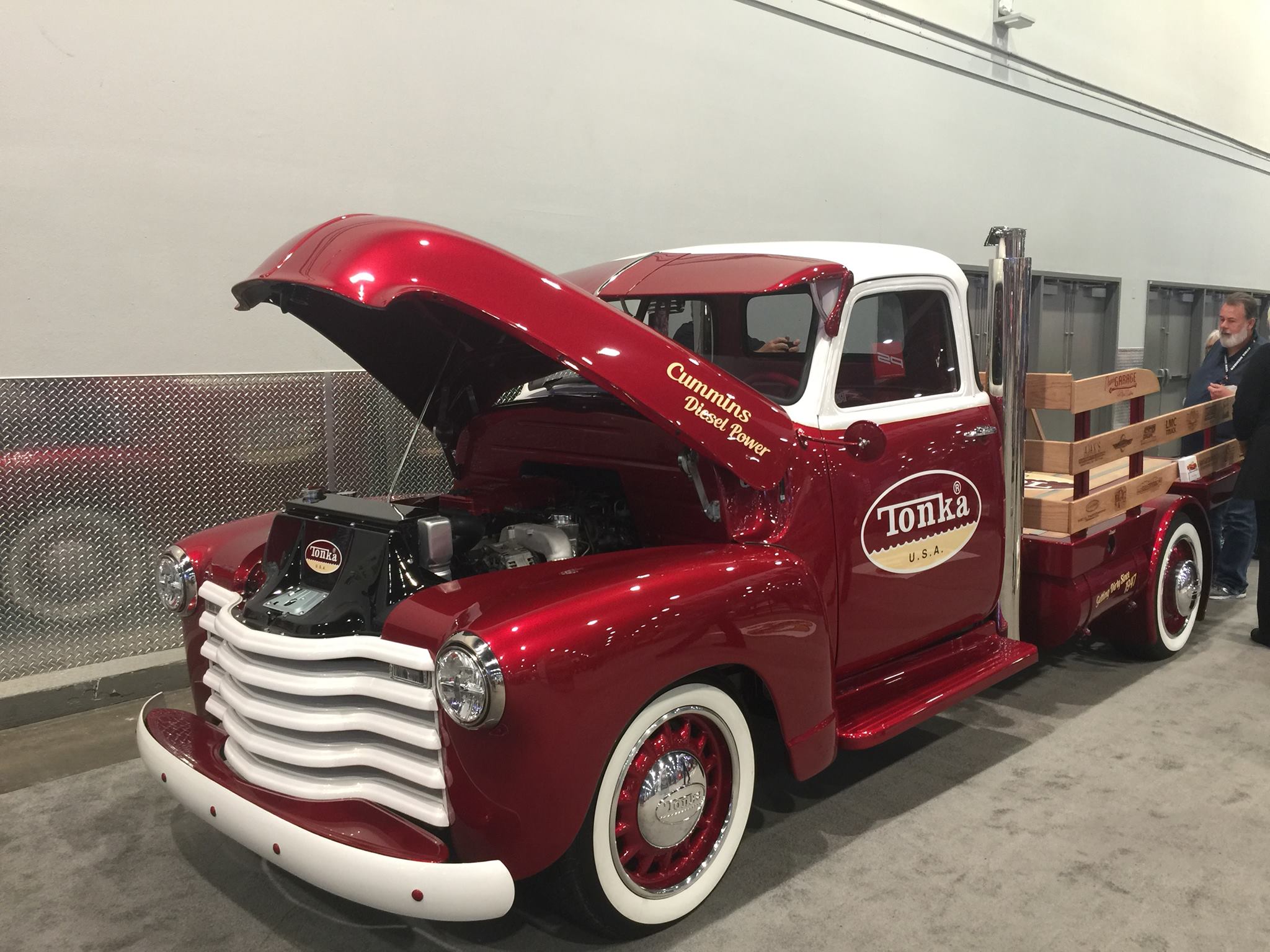 This 1963 Datsun 1200 pickup is more than than your average jolly truck in aqua paint. It hides one secret, and it has a lot to do with its powertrain. Collaboratively built by Local Motors and Babbit Motor Werks, Datsun 1200 rides on electric power. Its red-lined bed is stuffed with batteries, and electric-drive system with electric motor mounted on the rear axle comes from Axion. It’s not every day we see something like this, but it’s good we did.

This heavy duty D Series pickup has been restored in pristine fashion. Resto mod certainly took plenty of time, but at least classic and contemporary now work together in giving this SEMA 2016 piece both intimidating and appealing demeanor. Although 4-door D200 body has been taken from the 50-year old truck, frame is actually fresh. It’s coming from 2015 Ram 3500 HD truck. 6.7L Cummins diesel mill has been tampered with by Blacks Diesel. They’ve added their own in-house twin-turbo kit, X Flow intake and Pulse manifold. Kelderman and Fox shocks keep the Dodge high in floating stance, while 37-inch Toyo Open Country R/T tires and American Force wheels round things up in the corners. 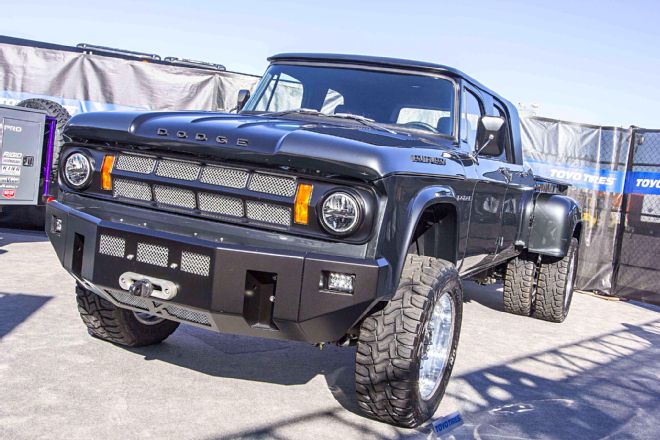 This is both one of the weirdest and coolest trucks from SEMA 2016. I wanted to keep it for the grand finale, but I simply couldn’t handle the suspense any more. So, here it is – a 1948 Willys pickup built in the Wild West demeanor. Kenny Hauk is the mastermind behind the project, and it’s not his first attention-grabbing restoration. Willys is powered by 12-valve Cummins diesel engine bolstered by Turbonetics turbocharger, and had to be extended in order to accommodate the setup.

Old West faux aged finish theme rides on Fox and Synergy Suspension components. Truck doesn’t only pay tribute to the Wild West scenery, but guns from that time as well. One of the weirdest features of this pickup is its shift lever which is actuated by a revolver. Its twin-stick transfer case is controlled by six-gun chambers. There’s much more to it, though, as you can clearly see.

We often mention restoration houses doing great jobs on their projects. Well, Daystar employees have gone a step further and completed this raw Dodge Power Wagon in just 50 days. Sure, it lacks the finishing touches, but who needs fancy paint on three-quarter century old truck anyway! Only copper accents give away the feeling that something has actually been done. And there’s that moonshine still in the bed. As for the power, it comes from Chevrolet LS3 V8 mill and Edelbrock E-Force supercharger. 750 horsepower required nothing less than Dana 60 front and GM 14-bolt rear axle in order to be handled. 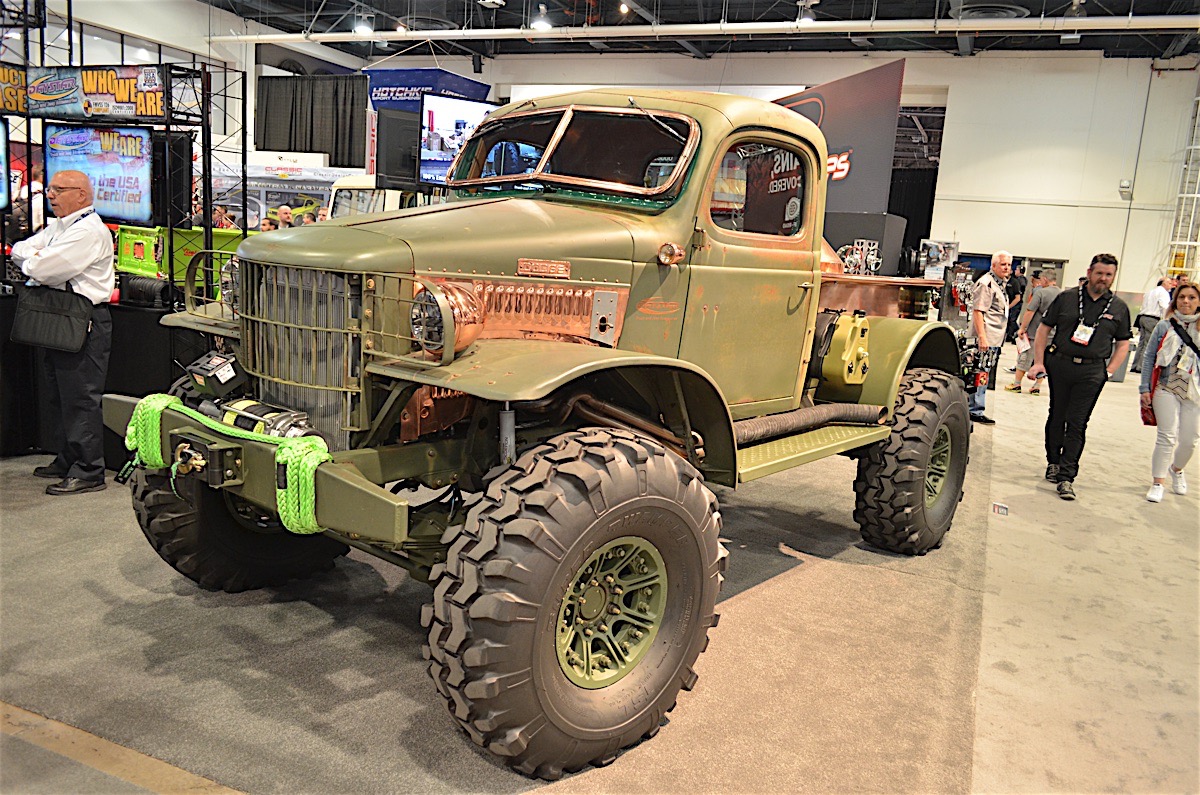 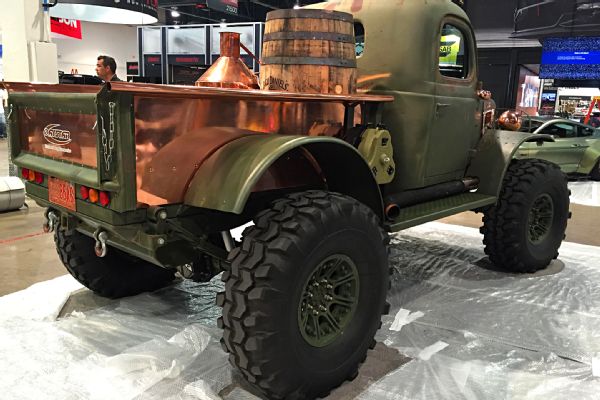 Why’s this venerable, rusted Ford F1 built by Chuckles Garage out of Santa Rosa, California, so great? Maybe it’s due to its 1,200-horsepower and 2,000 lb-ft of torque powerplant consisting of 5.9 L Cummins inline-six diesel engine taken off a 2005 Freightliner, Nitrous Express NXD diesel nitrous system, and Industrial Injection Silver Bullet 66 mm and Big Brother Schwitzer Series 91 mm turbochargers. Or maybe its simply “Old Smokey’s” zero fucks given demeanor. Not only does it lack a decent paint job, but it also lacks the right headlight. And, that’s just the beginning. But we won’t be heading in that direction. Focusing on what it actually has, “Old Smokey” F1 rides on tubular a-arm custom front setup and a 4-link rear suspension with adjustable panhard bar. I think it’s gorgeous, although a bit rough around the edges. 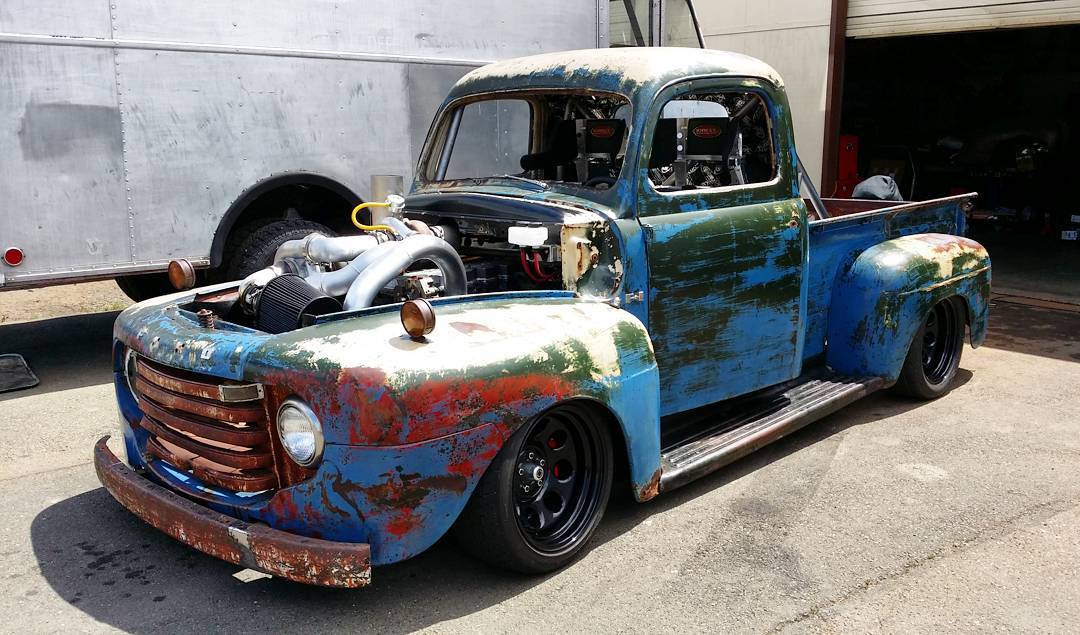 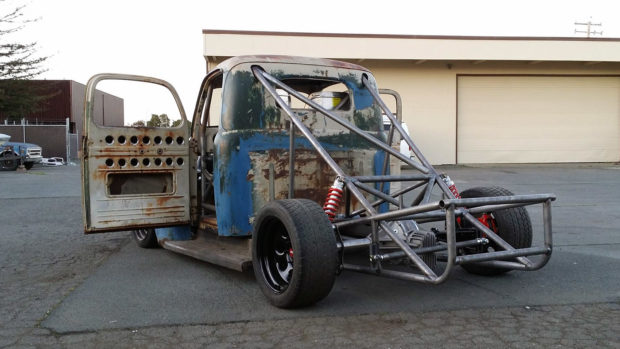 This gargantuan beast built by Diamond Eye Performance simply dominates the SEMA 2016. Their 1948 Ford F5 COE Hauler sits on 1985 GM C30 chassis which is most unlikely of sources for a Ford, to put it mildly. It also gets front and rear air ride suspension and one-ton GM 14-bolt dually rear axle. Power comes from beefed up 12-valve Cummins diesel engine which now churns out 550 horsepower and 1,100 feet-pound of twist. Cummins powerplant is complemented by Allison 1000 transmission which sends all the power to Toyo tires wrapping American Force wheels around. And it wouldn’t be a true hauler if it hadn’t hauled another custom pickup in its oversized bed.

Believe it or not, Craig Piggot’s Chevy C10 you see here started out as fully restored stepside truck. He wasn’t entirely satisfied with it so he decided to do a makeover, and this is the result. Pristine 1968 gold-painted, low-riding service bed pickup with enough pizzazz for the entire SEMA 2016. It appeared at AccuAir Truck Corral and blew the visitors away with its looks and sound. Roller assembly, dual quad intake manifold, 454ci big-block Chevy V8 can’t be done justice in a post. You simply have to hear it in action. Craig Piggot said they invested over $100,000 in it which isn’t a figure to be trifled with, but isn’t exactly “top buck” by SEMA 2016 standards either. It’s balance that makes the best out of any given situation, and this Chevy C10 has balance galore. 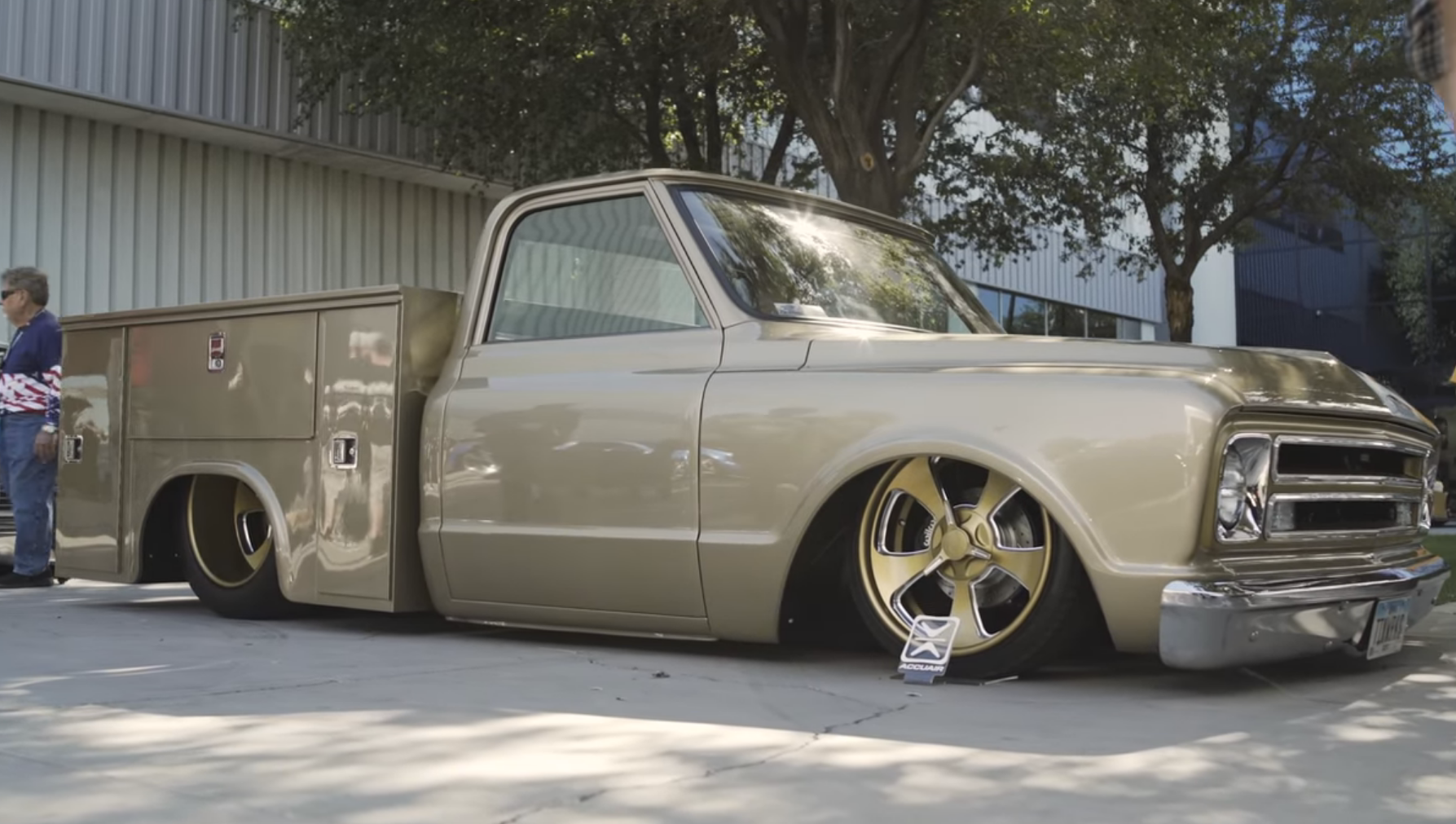 
Spooktacular Airstream Funeral Coach: Want Last Rites With Y...
Hands On With The 2022 Toyota Tundra: The Updates Were Worth...
The 6 Most Underrated 90s Cars And 10 Of The Weirdest!
HVA Honors Two Legendary Muscle Cars: Castle Duesenberg And ...
2022 Kia Carnival MPV: Welcome To The Minivan Party
5 Certifiably Insane Engine Swaps That'll Have You Shaking Y...