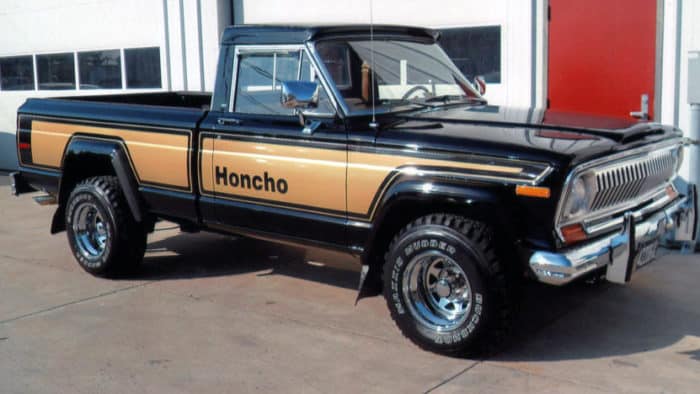 We all know the definition of a good pickup. It’s a sturdy and stout body on frame vehicle with at least some kind of a bed capable of towing cargo. The more cargo it can tow, the better. Some would say it’s what every average pickup has and they’d be right. That’s what pickup trucks were intended for after all. Not to mention the revolution they started in the automotive world when they first appeared.

This list will emphasize on something different. it didn’t take long for manufacturers to figure out they could start experimenting with the pickup truck layout. When they started, they opened up the Pandora’s box. All kinds of awkward pickup trucks started appearing on the roads from seventies onward, and they still do. Most of them are performance versions of their conventional siblings, but that’s not the only way to make an outrageous truck. Some of them are luxurious beyond pickup truck’s usual requirements making them effectively unusable as pickups. Finally, some are so expensive that very few people have the means to buy them. That certainly makes them outrageous. Does it also make them great? I’d say it does. At least in most cases. 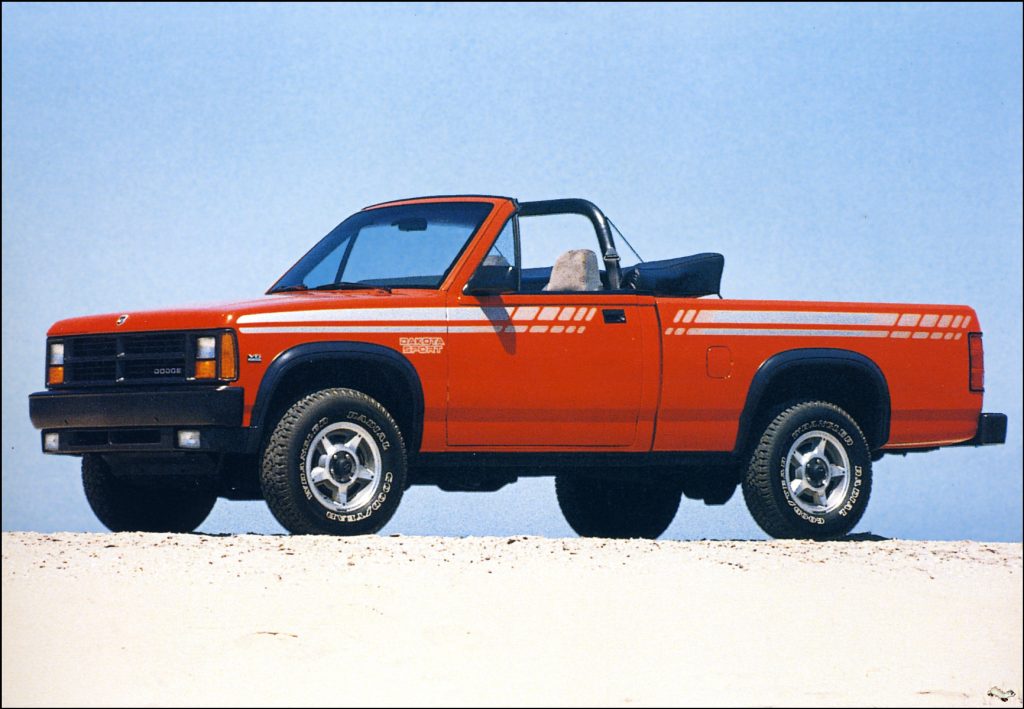 Are These The Best And Toughest Trucks Ever Built?

The Rod Hall Signature Edition was a part of Dodge Ram’s first generation. Famous off-road racer Rod Hall teamed up with Dodge in order to make a custom edition pickup, thus continuing automaker’s tradition of offering low-series special edition trucks. They produced 14 in 1986 and 1987, but they weren’t really in accordance with NHTSA standards due to their high and stiff racing suspension. NHTSA recalled all of them and only 9 survived to make the re-entry. However, Hall tried again in 1990 when he teamed up with Carroll Shelby, and this time they produced 33 of the Signature Edition pickup trucks. They only packed 170 horses thanks to 318ci 5.2L LA V8, but they did have a unique three-tone paint scheme, bed-mounted lightbar, and Rod Hall off-road lights. 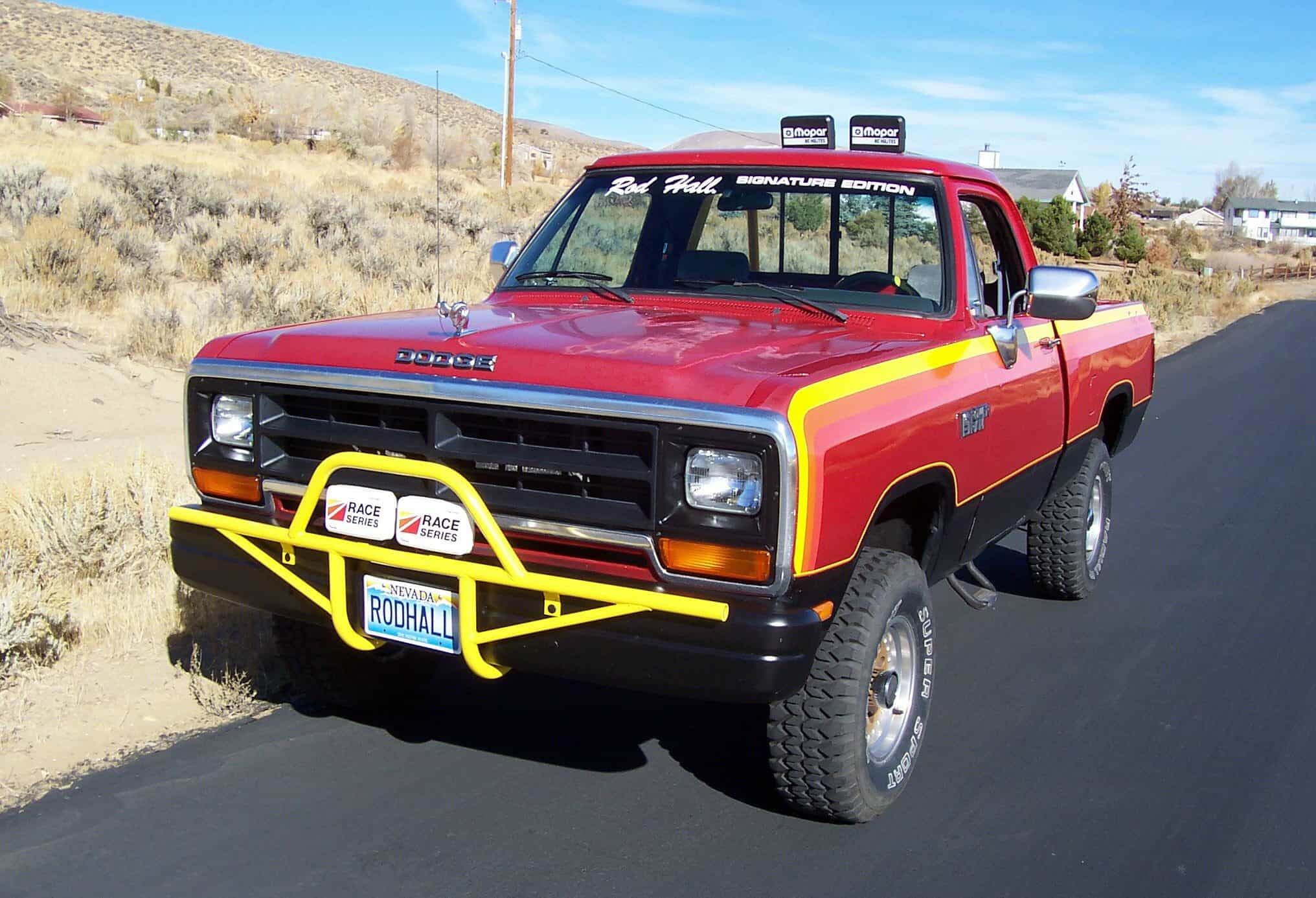 The Ford F-150 Raptor was first introduced during America’s most popular pickup’s twelfth generation. Between 2009 and 2011, it was powered by 310-horsepower 5.4L V8 or 411-horsepower 6.2L V8 with latter being the only option for 2012. New F-150 Raptor packs 450 ponies and 510 lb-ft of torque thanks to 3.5L EcoBoost V6 mill. It again features BFGoodrich all-terrain tires and special Fox suspension. It’s currently the most outrageous truck in the market – period. 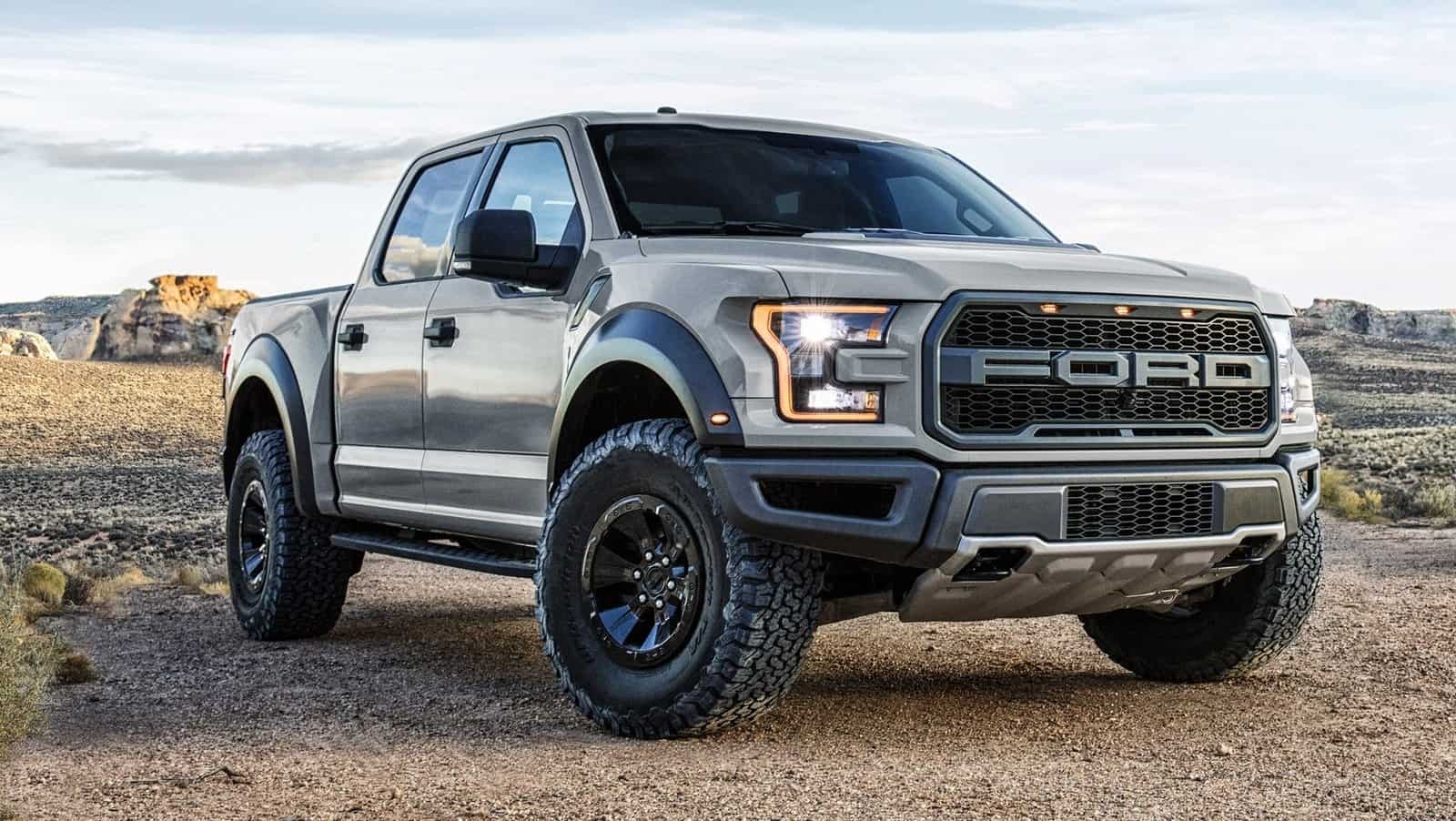 People still argue about the LM002’s role in Lamborghini‘s lineup back in the day. Moreover, people still can’t decide what it was. Was it a pickup or an SUV? Well, it has a bed which is enough for us to call it one of the most outrageous pickup trucks ever produced. Rambo Lambo had the same engine as then flagship Lamborghini; the Countach. 5.2L V12 was capable of making north of 400 ponies, but those requiring more could have ordered it with 7.2L L804 marine V12, making much, much more. No matter which of these came with the car, LM002 guzzled fuel like there was no tomorrow. Only 301 were made, and considering they weren’t exactly Lamborghini’s comfort zone, it’s surprising even that many came off the assembly lines. 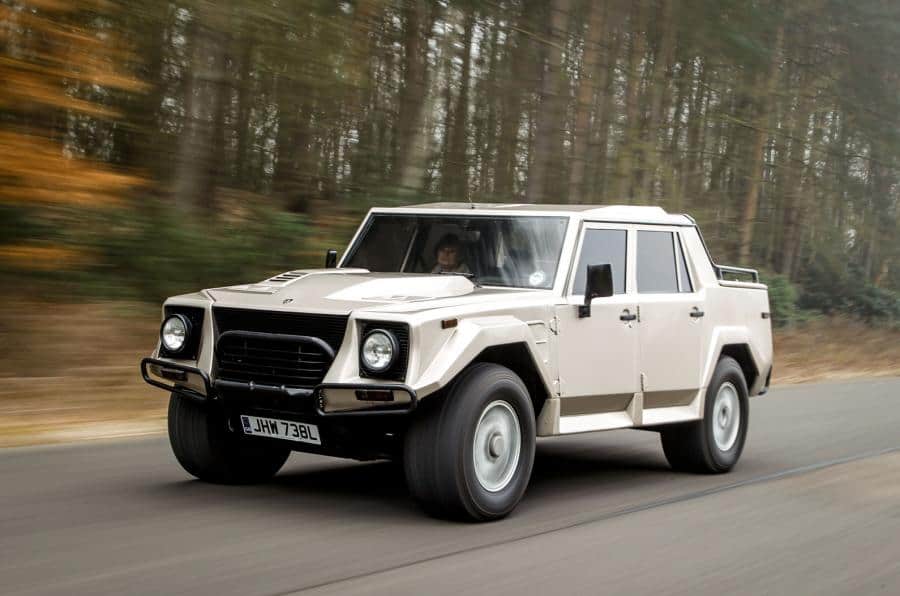 Part of the fourth generation C/K pickups, 454 SS didn’t really differ that much from the rest of the pack. At least not visually. Its brazenness comes from under the hood. As its name suggests, this performance edition pickup was powered by 454ci 7.4L V8 mill generating 230 hp and 385 lb-ft of torque. Don’t let the low horsepower figure fool you. Chevrolet 454 SS probably made more than that. The problem was, it was only available with short box and regular cab. Moreover, it only came in Onyx Black paint with a garnet red interior scheme. It looked seriously cool, though. 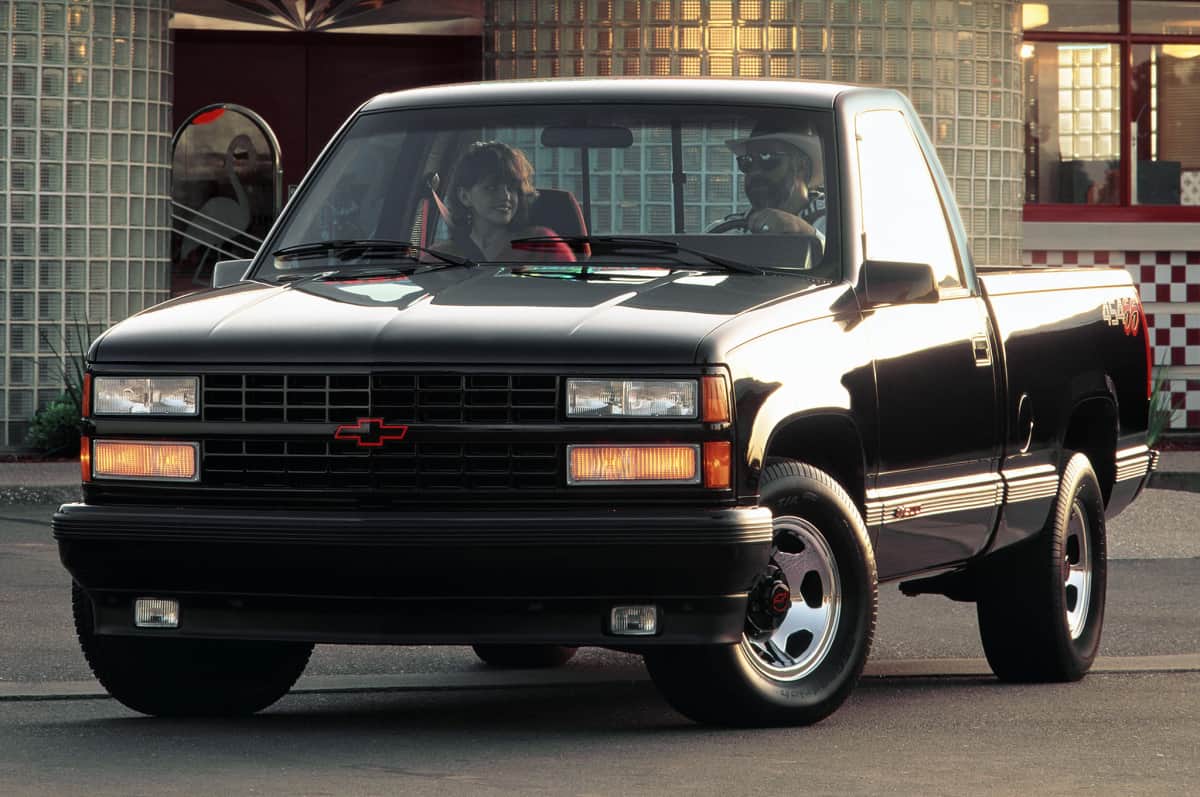 The Dodge Lil’ Red Express was one of the pickup trucks that had started this outrageous madness in the first place. It didn’t only look good, it performed on the same level. With semi truck-inspired vertical exhausts, 7-inch front and 8-inch rear chrome wheels, and great-looking red paint job, Lil’ Red Express remains one of the most unique pickup trucks ever made. Thanks to modified 360ci version of the police engine, it was able to push up to 225 horsepower. That makes it one of the most outrageous pickup trucks as well. After all, it was basically the first muscle truck ever made, and it was the fastest American vehicle produced in 1978. 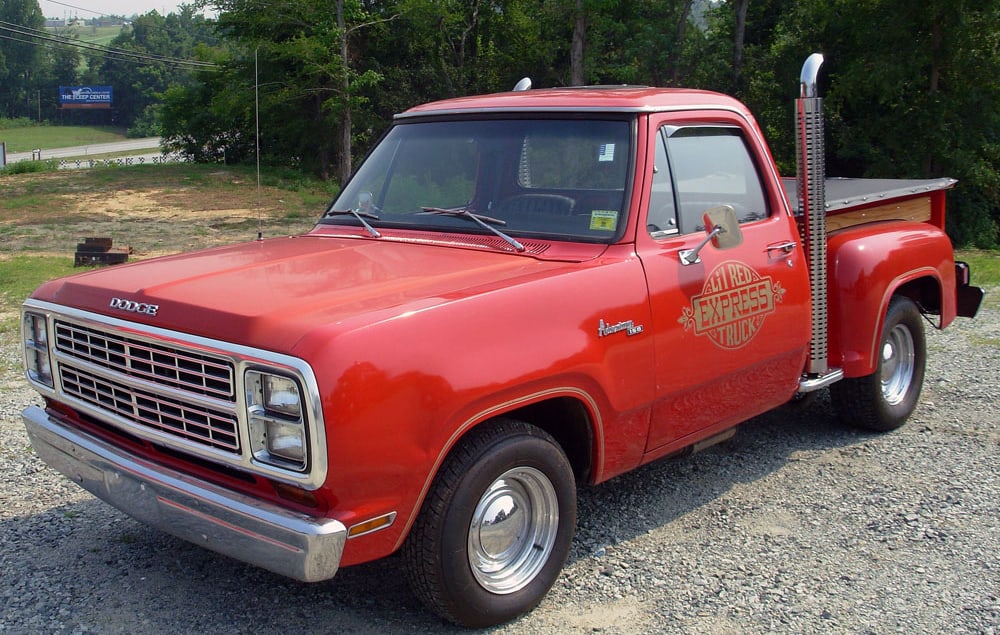 The Mazda B-Series enjoyed a long and prosperous 45-year long production run, but it was never as quirky as it was between ’74 and ’77 when Japanese decided to stuff the Wankel rotary engine in it. The rotary-engined pickup (REPU) wasn’t a capable towing unit, it wasn’t all that economic, and it couldn’t fit more than two people in its cab. So, what were its strong points then? 110-horsepower 1.3L Wankel sounded exquisitely and it was more than powerful enough for this 2,800-pounder of a truck. And it redlined at 7,000 rpm. Just like Japanese sports cars of the era. Those were its strengths 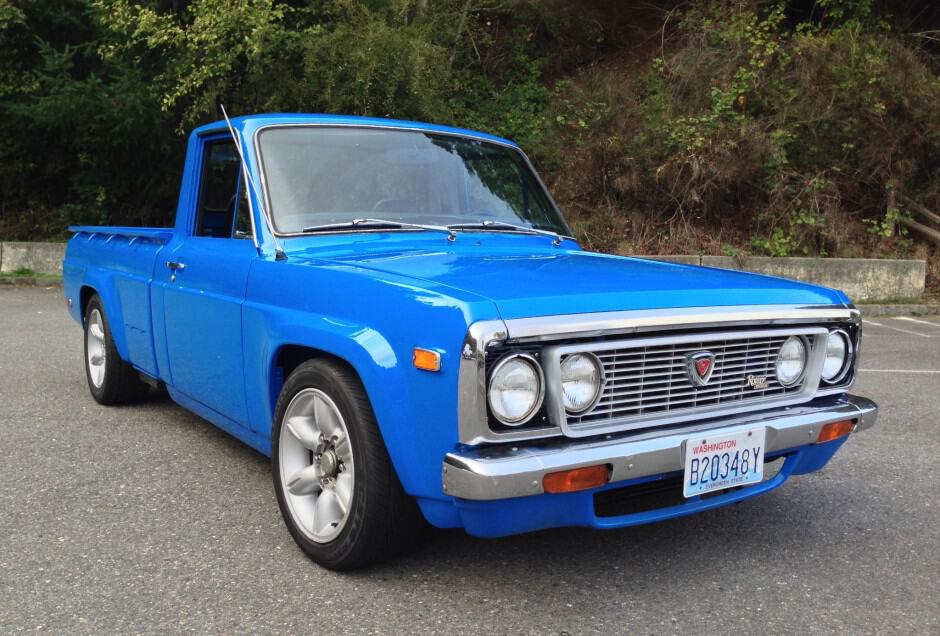 Similar to the Chevy 454 SS, the GMC Syclone too was the high-performance version of GM division’s half-ton pickup. It was the GMC Sonoma’s most powerful iteration which only came in black paint job. Apart from the limited 10-unit Marlboro editions, that is. Most of them (2,995) were produced in 1991 with 3 being completed in 1992. Together with the Typhoon SUV, Syclone was fitted with the same 4.3L LB4 V6 engine, Mitsubishi turbocharger, and Garrett intercooler. It was all-wheel drive exclusive and the first production truck with anti-lock brakes on all four wheels. Outrageously great? You bet! 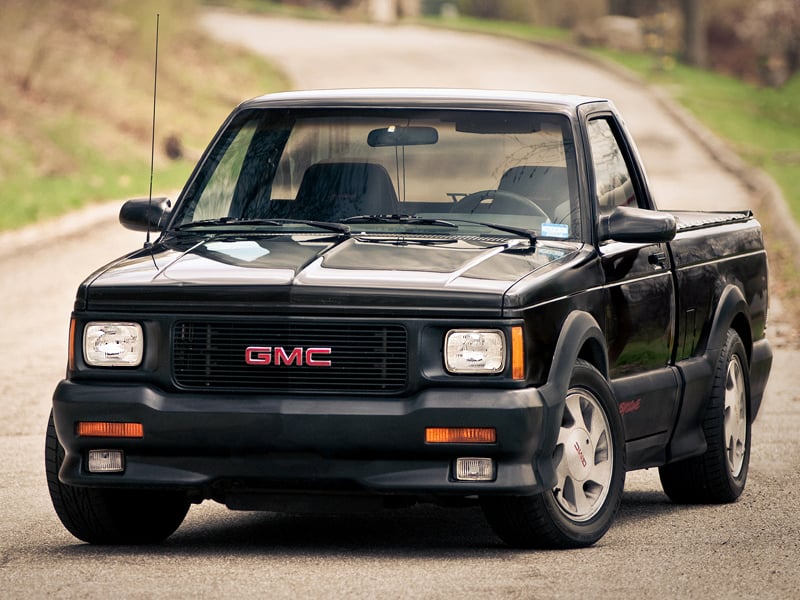 Ranchero started the passenger car/pickup truck mash up trend back in the late sixties and it quickly caught fire. It even spawned a direct GM competitor of more illustrious name – Chevy El Camino. During the years, Ranchero was built upon full-size, compact and mid-size platforms so it doesn’t come as a surprise it was also powered by a wide range of powertrains. However diverse the engines were, they were never anything other than in-line sixes or V8s. 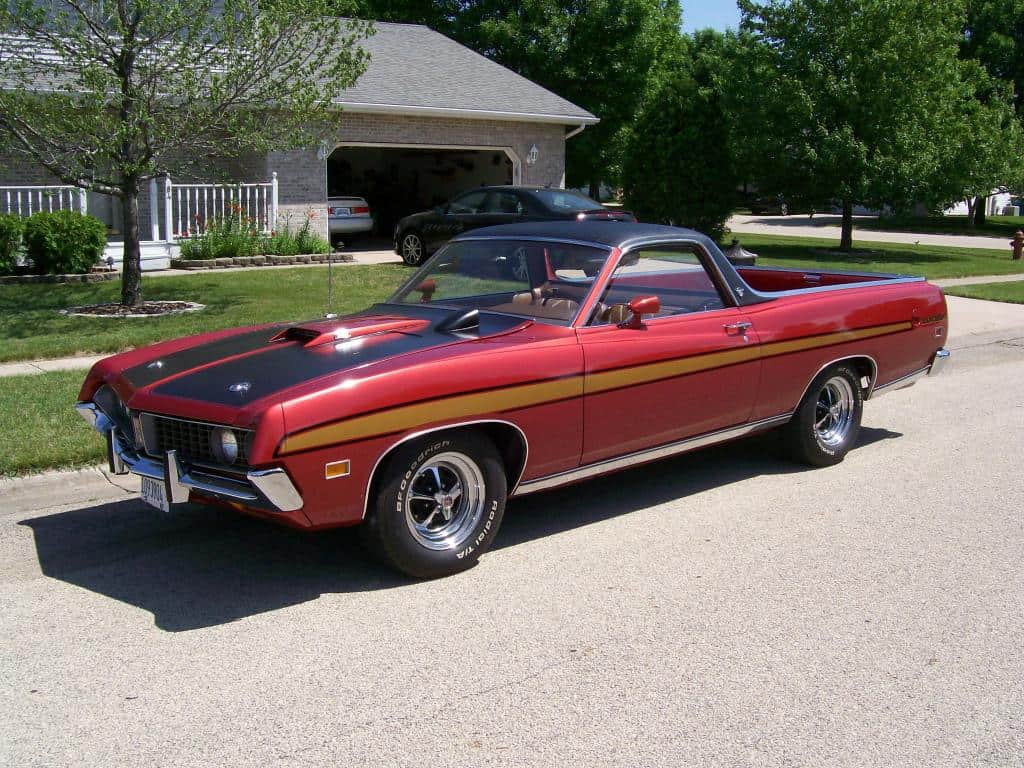 SSR was so peculiar that we don’t know whether to call it a pickup or a convertible roadster? In the end, it’s probably best to say it was neither of the two. That’s precisely what had lead to its downfall. Built as 1947-1955 Advance Design pickup’s modern successor, SSR ended up being a flop. Although it looked compact and curvaceous, Chevy SSR had a 4,700-pound curb weight. It was so heavy in fact that even 300 horsepower out of 5.3L V8 engine wasn’t really enough for it. 390 ponies from 6.0L LS2 V8 did fix that part, but it was already too late for a car caught in no mans land. 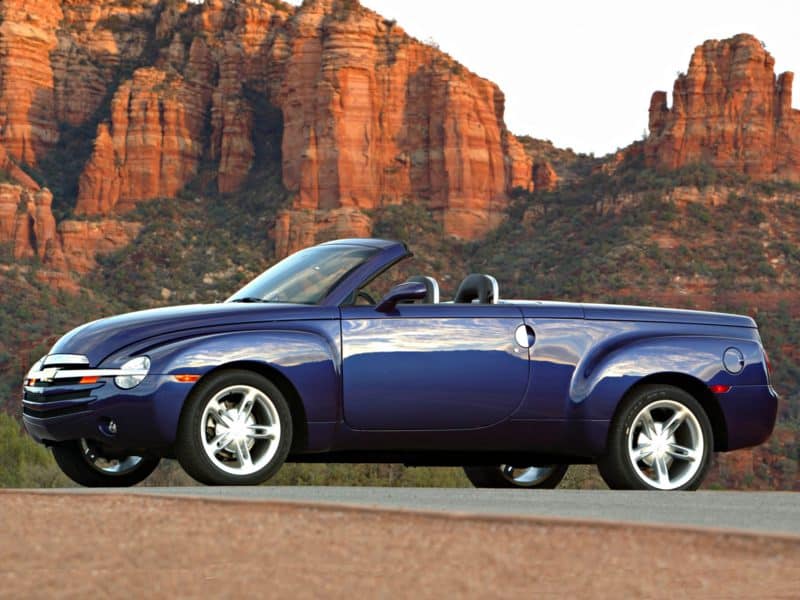 The Honcho wasn’t more than a trim package on the Jeep Gladiator J10 truck. Or was it? Although options varied from year to year, Honcho always came with wide-track Dana 44 axles. It also had the large 31-inch tires, and various stripes and decals. Interior could have been ordered with the unique Levi’s touch, and the “10-4” option which was nothing other than the Citizens’ Band radio. Honcho could have been fitted with any available Gladiator J10 engine, but AMC’s 401ci 6.6L V8 with 215 horsepower was the most powerful choice. Note that the engine was underrated due to strict emissions regulations. After all, the same mill developed 120 hp more in 1971. 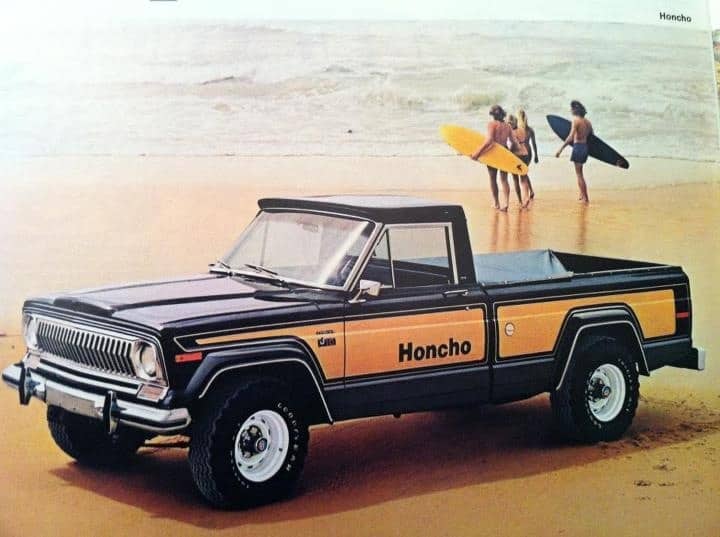 The Lincoln Blackwood was so “not a pickup” that it was actually an outrageous pickup. Plushy and luxurious large Supercrew truck was basically a rebadged luxury version of the F-150. However, its towing capabilities were below par, to say the least. Not only had it had the plushy interior, it also came with carpeted bed. That pretty much limited the variety of cargo one could have towed in it. Blackwood basically looked good in all that mandatory black, and that was it. 300-horsepower 5.4L V8 was fine as well, but lack of versatility isn’t something a pickup should boast with. In the end, only 3,356 of them were built before Blackwood got the axe. 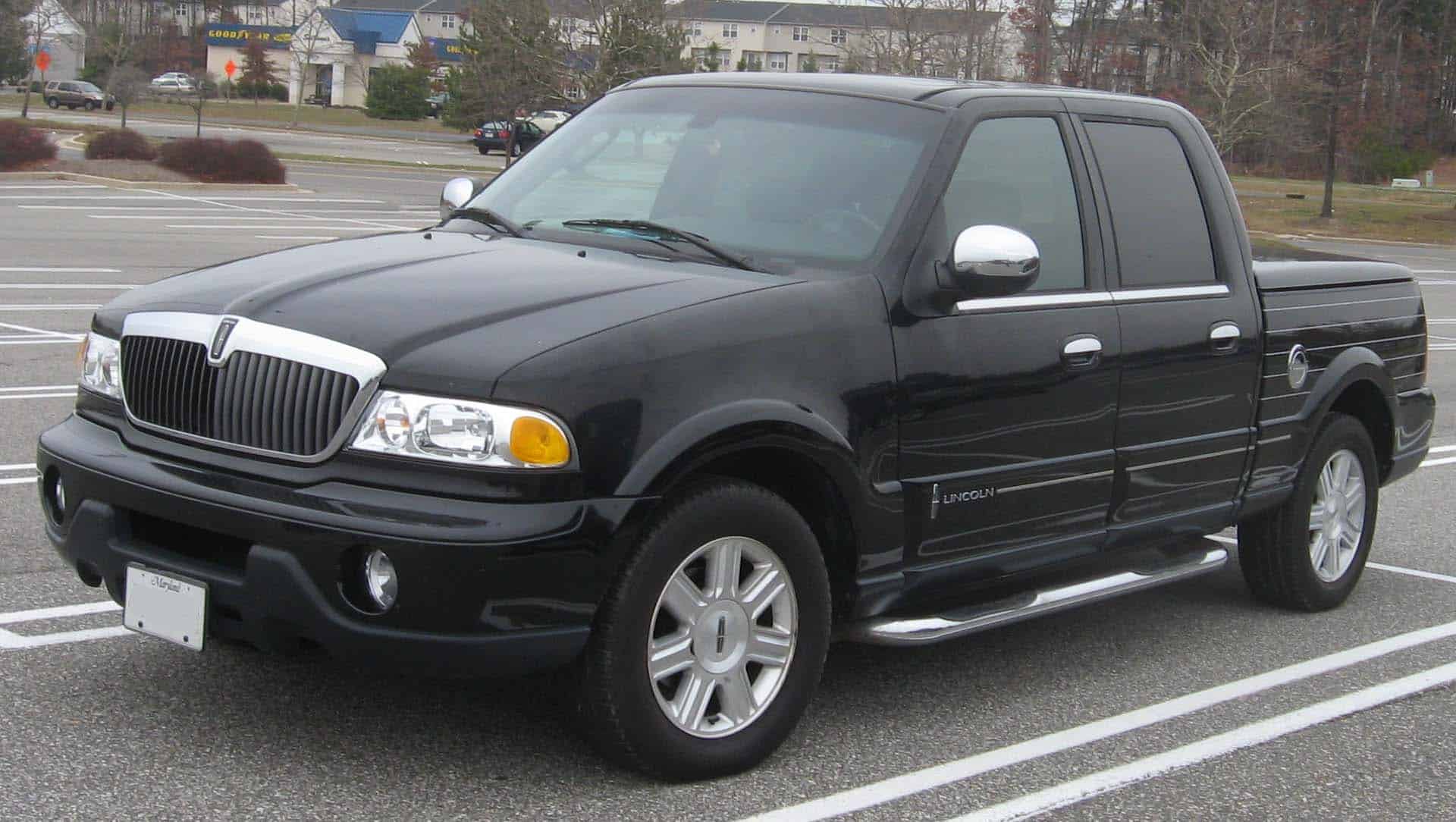 When the Dodge Dakota arrived to the market in 1986, it practically single handedly killed off all of compact pickups existing at the time. All future smaller half-ton alternatives would be mid-size pickups. But Dakota didn’t stop there. It also introduced the convertible to the pickup truck equation. Although the roof folded manually, Dakota still looked great with it down. Magnum V6 was the only available engine, and so was the two-door regular cab. Other worthy mentions from Dakota’s lineup are Shelby, Lil’ Red Express and Warrior Dakota – all revamps from the bygone era. 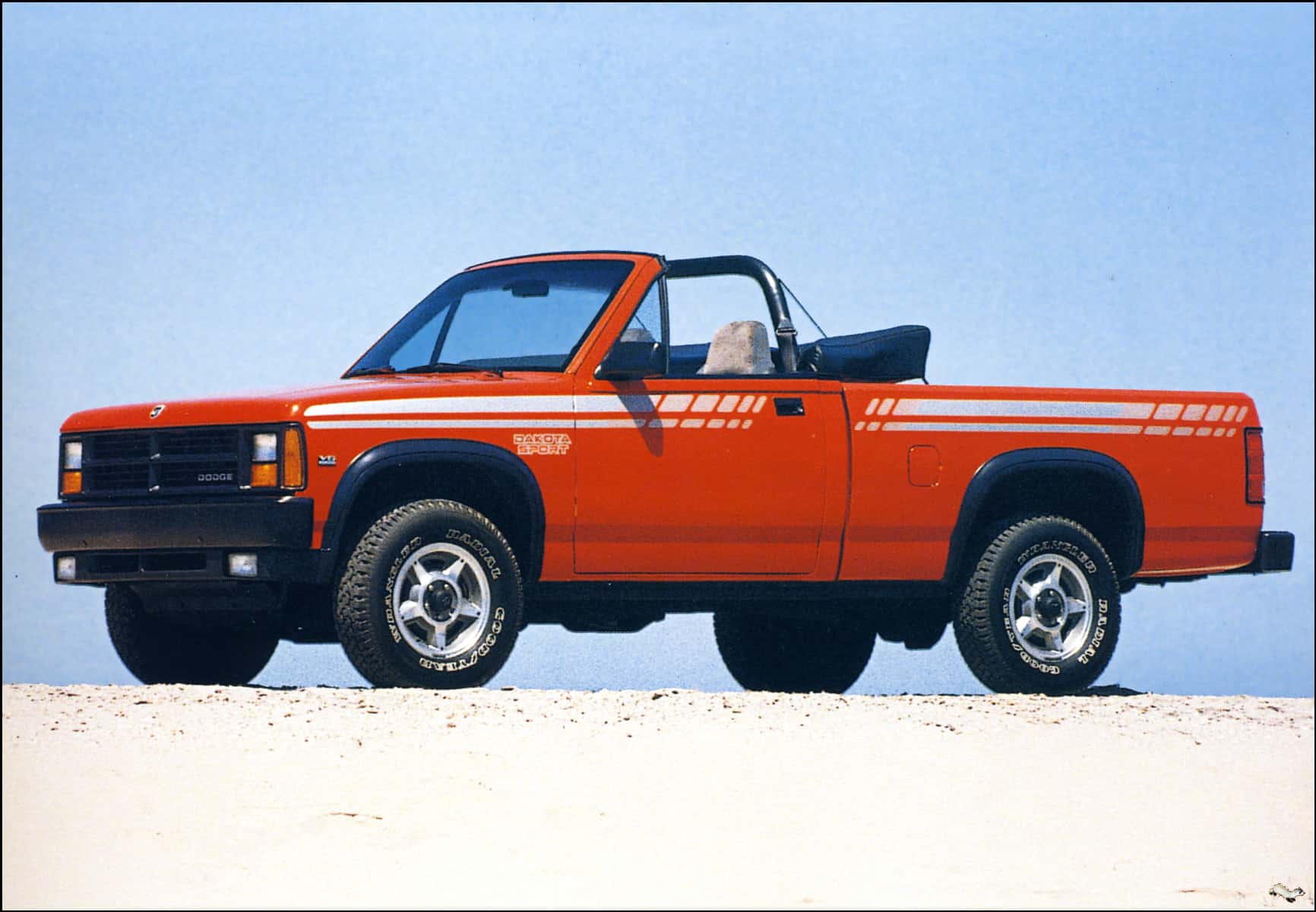 F-150 SVT Lightning was one of the most complete high-performance edition pickup trucks ever created. Apart from being quick and powerful, it also retained most of its conventional sibling’s payload and towing capabilities. During its first stint of production, SVT Lightning was powered by 240-horsepower 5.8L V8 mill. Millennium models had a supercharged 5.4L V8 with 360 horsepower until 2001 and 380 ponies after that. Apart from that, fastest non-Raptor F-150 benefited from numerous suspension, handling and body modifications. 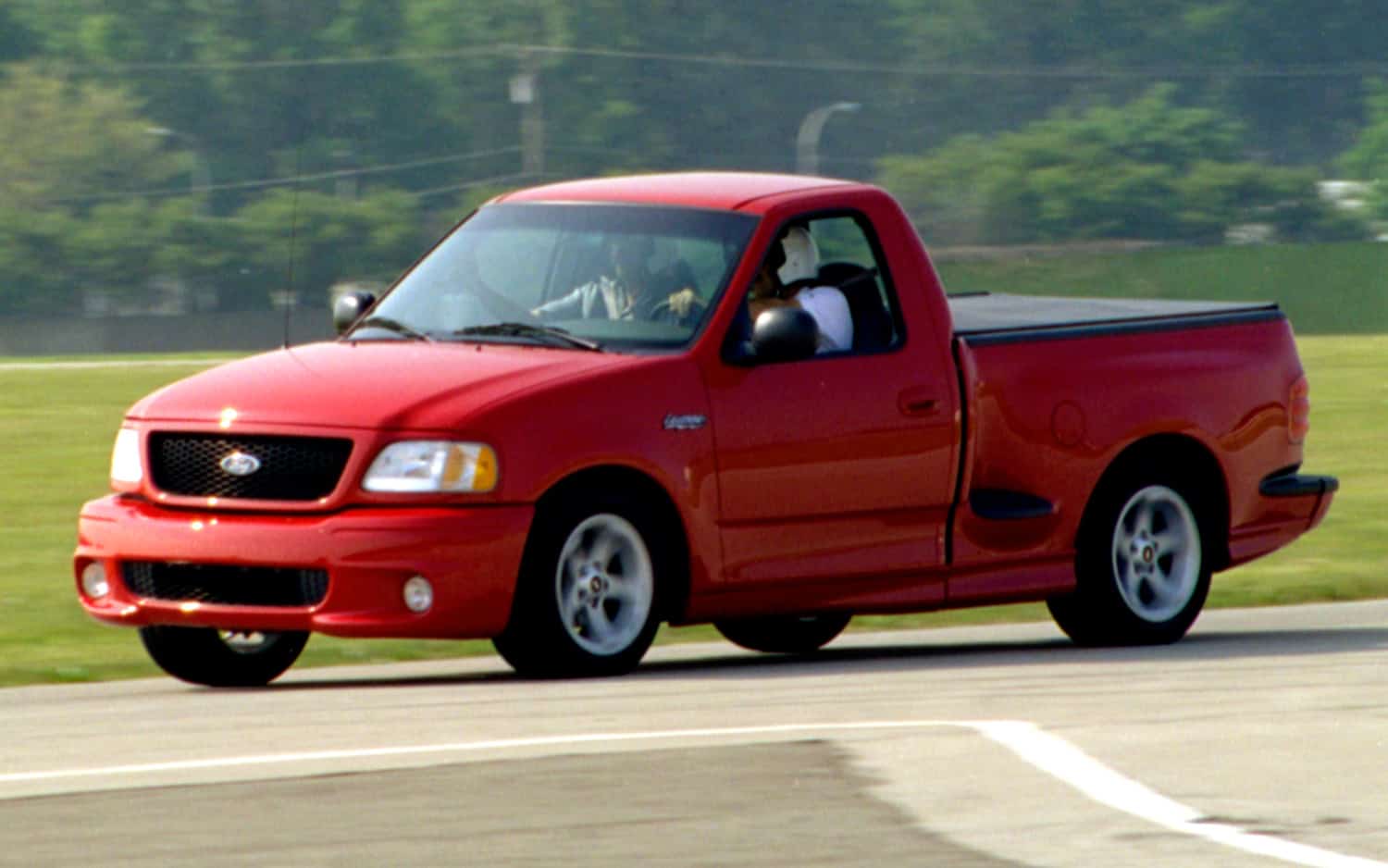 It doesn’t take a genius to figure out the Viper’s 8.3L V10 is one hell of an engine with lots of potential in various spheres. Pickup truck was one of the most obvious roads this engine could have taken beside the Viper, and it did. 10 years ago, Ram SRT 10 was the go to pickup if you needed performance. And it’s safe to say no manufacturer ever made more potent pickup than that, which makes it outrageously great. How does 500 hp and 525 lb-ft of torque sound? These figures alone could have propelled SRT 10’s 5,130-pound Regular Cab curb from 0 to 60 in 4.9 seconds and to the top speed of 154 mph. Mad figures even for today’s standards. 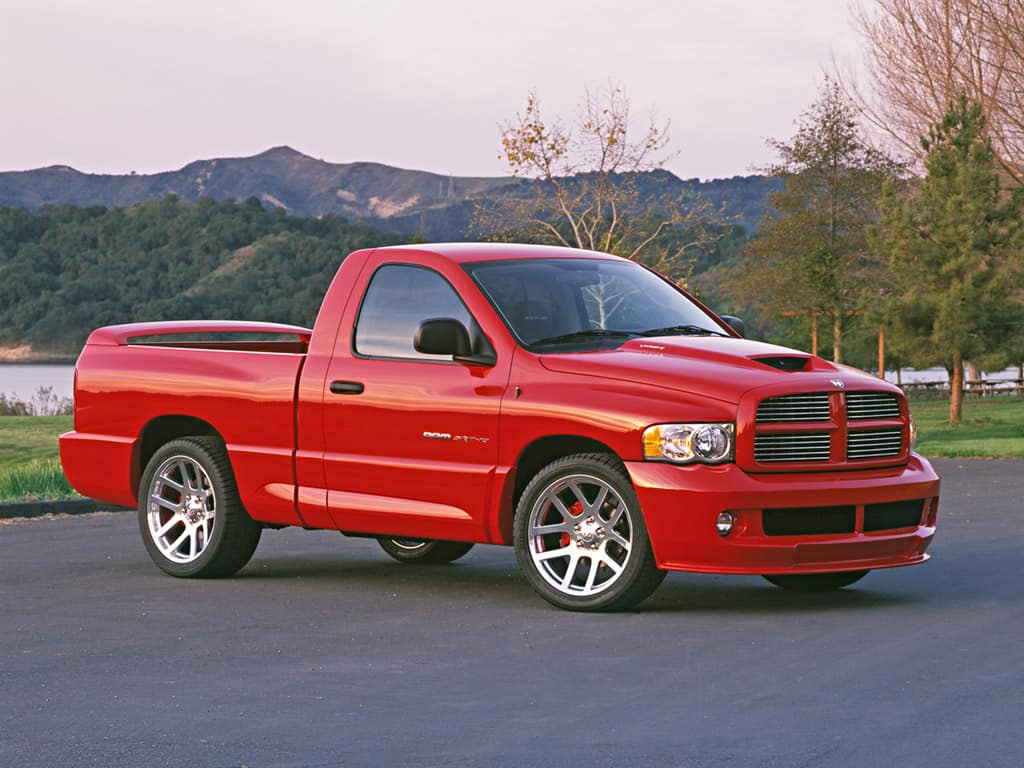 The Mercedes-Benz G63 AMG 6X6 is both one of the most outrageous and expensive pickup trucks ever produced. Six-wheel drive and 536-horsepower 5.5L twin-turbo V8 engine are solid enough for fine acceleration and awful fuel economy. Apart from being outrageously good and unconventional, G63 AMG 6X6 is also outrageously expensive. They go for anything north of $700,000 although their original stickers weren’t higher than $430,000 over a year ago. Germans do know how to make their cars exclusive and the prices only reflect that. 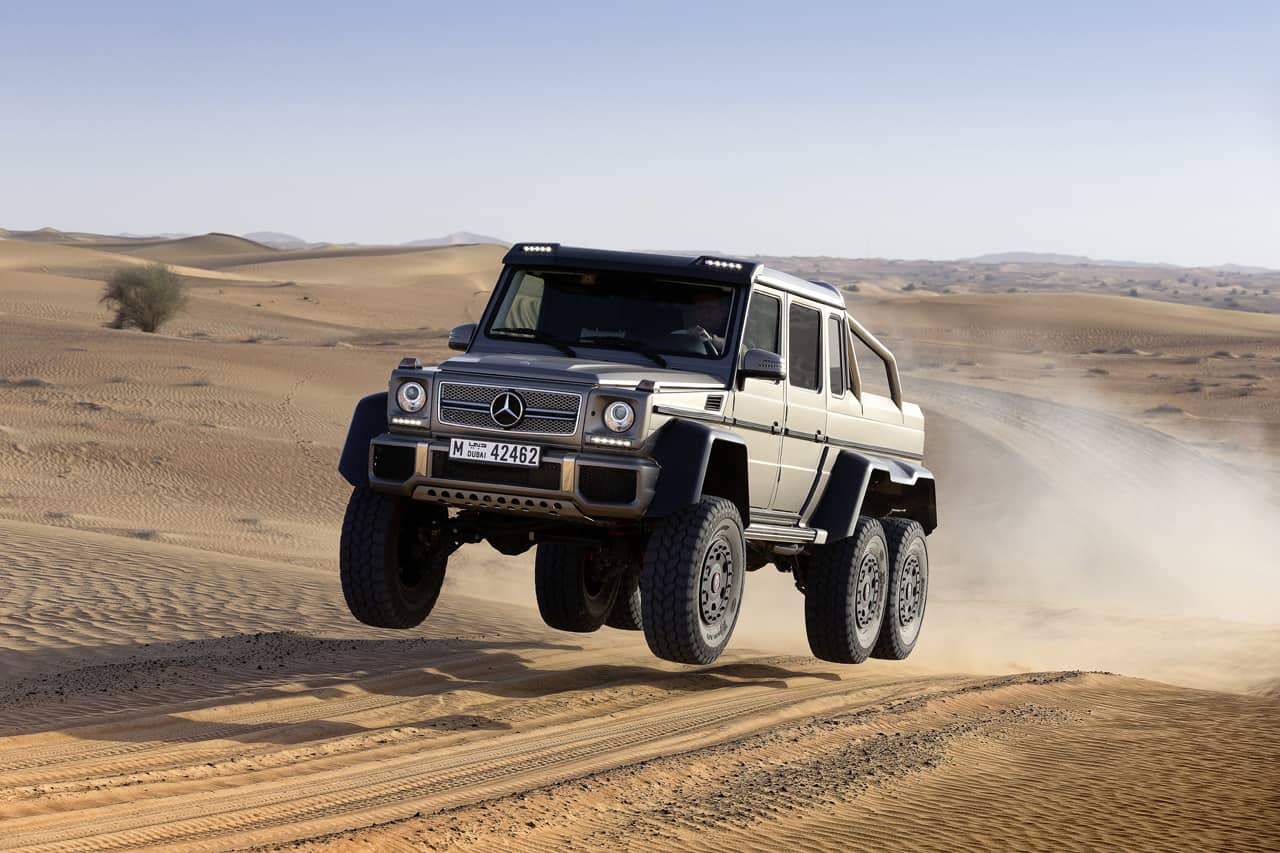