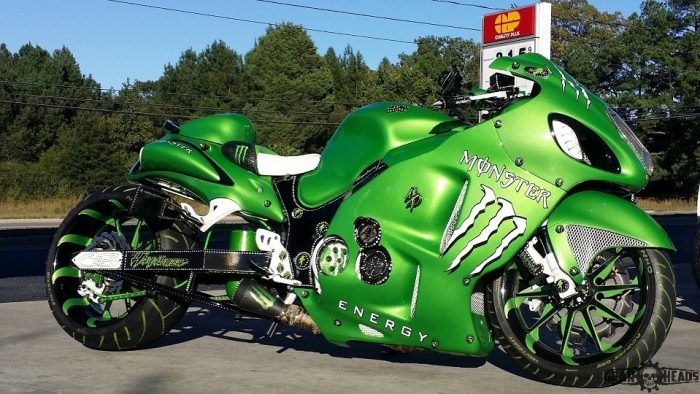 When Randy Dooley acquired this 1999 Suzuki Hayabusa back in 2013, he had ambitious plans customize it. Bought for a mere $3000 and missing a lot of parts, Randy had to get to work to just to make the thing a reliable runaround before the incredible transformation could even get started. It has taken almost four years for him to get it just right, and this is the final result: introducing the “Monster Bike” – a real head turner that rides and feels as good as it looks and sounds. You won’t see a custom Hayabusa going bigger than this. 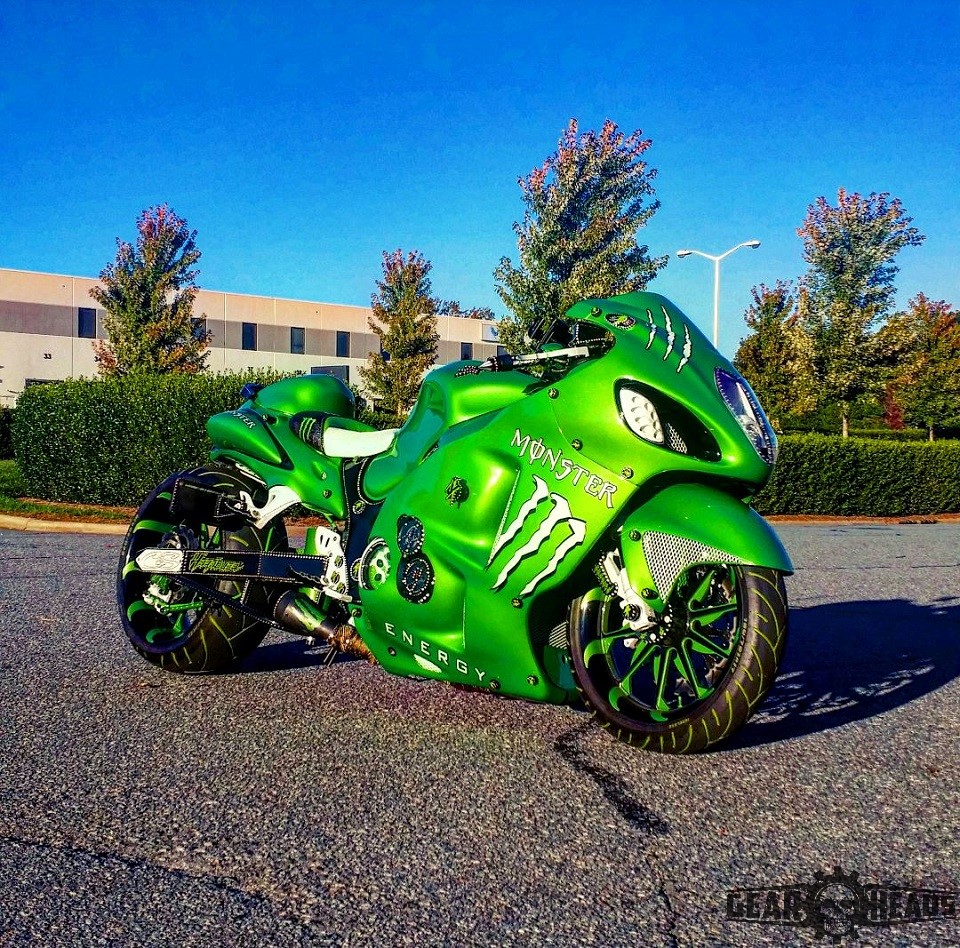 Based out of Kannapolis in North Carolina, Randy Dooley describes himself as your average guy, a devoted husband and a father of two, with an innate passion for bikes. Despite the fact that many builders like to dive headfirst into a project, Randy took his time with this custom Hayabusa. First of all, he had to turn the ex-drag racing machine into a street legal runaround. Next, he had to locate and isolate all of the small problems and fix them. Only after that could he even consider doing a full custom job. After two years of meticulous tinkering and troubleshooting, Randy had his first attempt at customizing the Hayabusa…before scrapping the first idea and starting again from scratch. At the beginning of 2016, he had a plan – and this time he stuck to his guns. 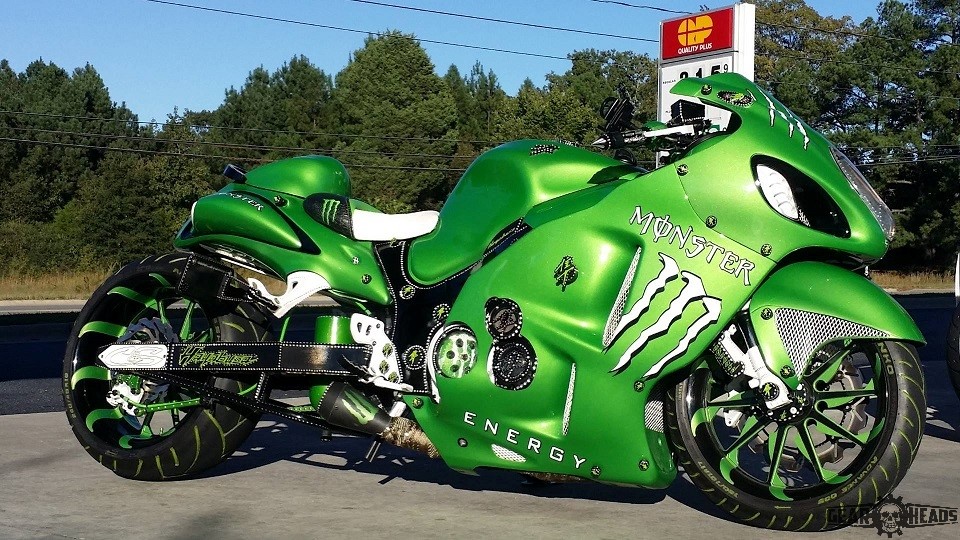 Taking only eight months to build, this incarnation of the Busa was inspired by the Monster Energy logo. We’re all familiar with that emblem, and Randy literally took the idea and ran with it. He had seen a few Monster themed bikes, but as far as he was concerned, they weren’t quite up to scratch. 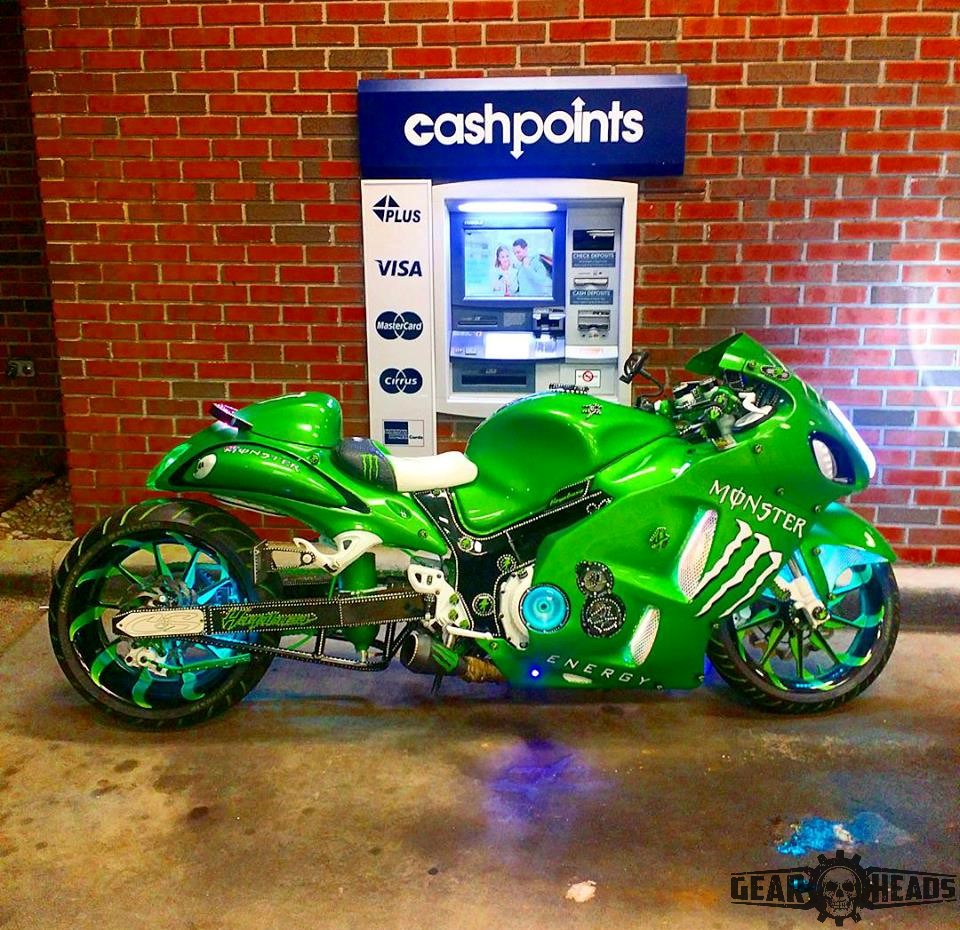 Despite having been stripped down before, Randy once again took to his tools. This time, the custom Hayabusa was in for some serious upgrading. To get the ball rolling, Randy decided to treat the engine to a new BMC filter, a set of Race City injectors, and a new EK ZVM2 chain. To give the bike a little more oompf, Randy installed a nitrous bottle system from Lee Performance, had the ECU flashed by Cory Meaux of CMP Racing in Marrero, Louisiana, and added a new exhaust. The new exhaust originally came from an R6, but was cut down to size for a shorter look, and twinned with Muzzy headers. It makes it stupid loud! 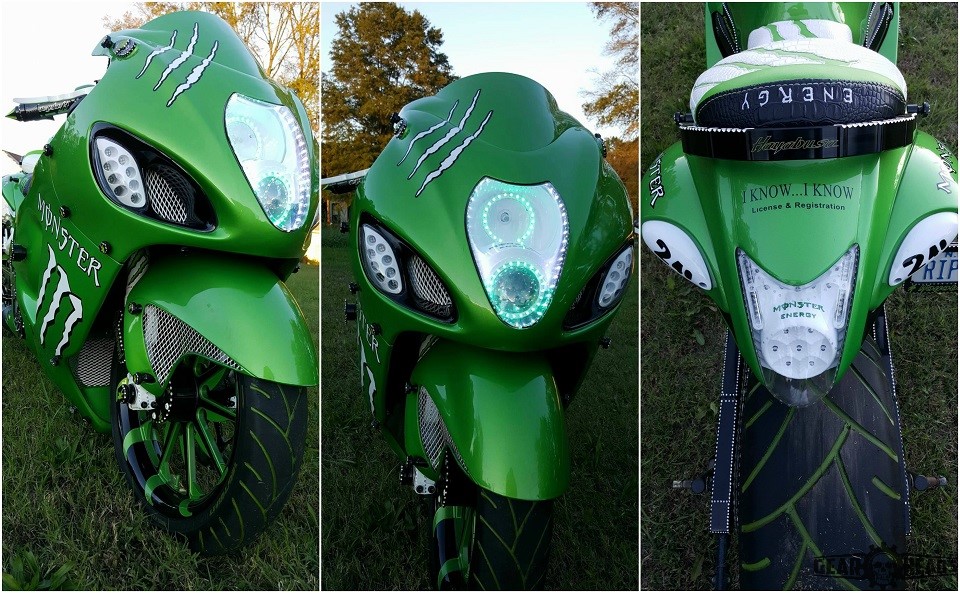 To give his custom Hayabusa a more modern twist, Randy also pulled out almost everything that you’d normally associate with a ‘99 model and replaced it with an upgraded ’07 system. 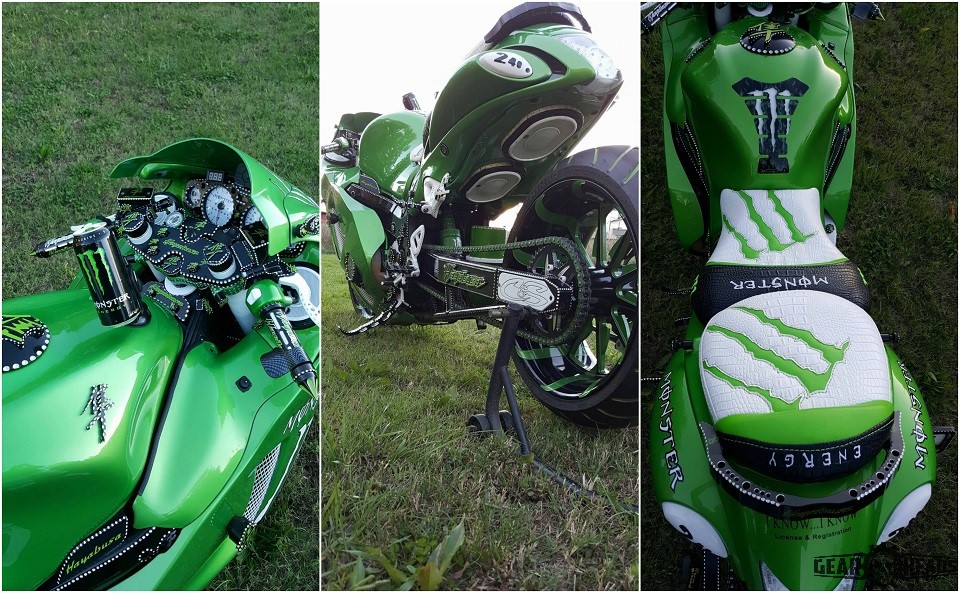 Next up, Randy turned his attention to the chassis and bodywork. The first upgrades included a new 240 swing arm from Garwood Custom Cycles, twinned with a new set of 240 Tornado Wheels from All Things Chrome. Garwood also supplied a number of brackets and fixings for Randy’s Monster as well, almost too many little details to list! With the new rims rolling on Shinko 005 tires, Randy then took his Monster-in-the-making to Heavy Hitter Cycles in Kannapolis, North Carolina, for a sweet Instant Up Air-ride system. Finally, he installed a set of Yana Shiki brakes.

Next up on the parts list was a dress up kit from Redline Custom Cycles based out of Puerto Rico. Opting for a black diamond cut style, Randy also sourced some similar accessories from PPM Customs in Myrtle Beach, Ball Z Motorsports, and All Things Chrome. Randy also got in contact with Brandon Clark from 2WheelGrilles for some custom made grilles to give the bodywork a serious pop. However, to really make his Busa stand out from the crowd, Randy replaced the original tailpiece with a 2012 tail section, and swapped out the tank for a 2012 unit too. The actual seat arrangement was expertly upholstered from vinyl Black Gator and White Gator from the guys at Seats-By-Tommy in Florida. 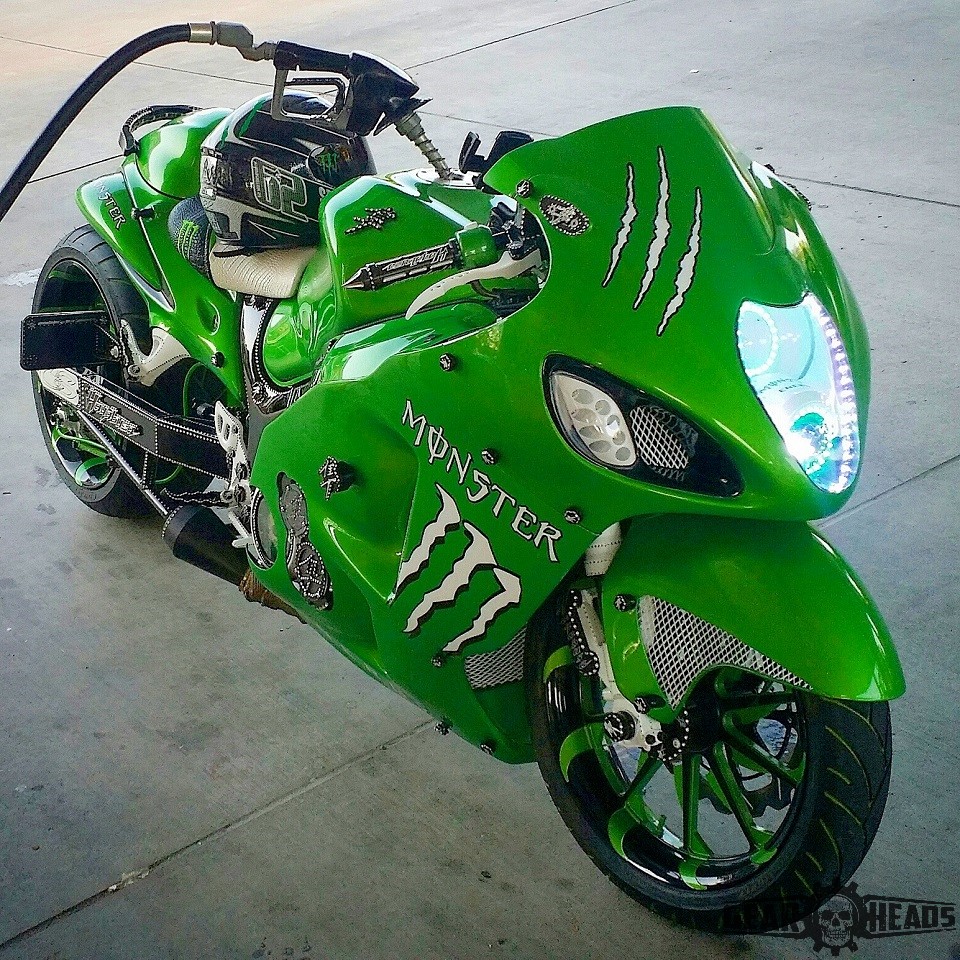 With the bike on the way to looking good, Randy decided it needed to sound good too. Now, the modified R6 pipe is one thing, but Randy wanted a serious sound system. The Monster is now equipped with a set of 4×4 inch front speaker pods, four JL Audio C2 speakers, a 6×9 speaker kit from Platinum Motorsports, all powered by a Bluetooth operated Kenwood 400 watt amp. 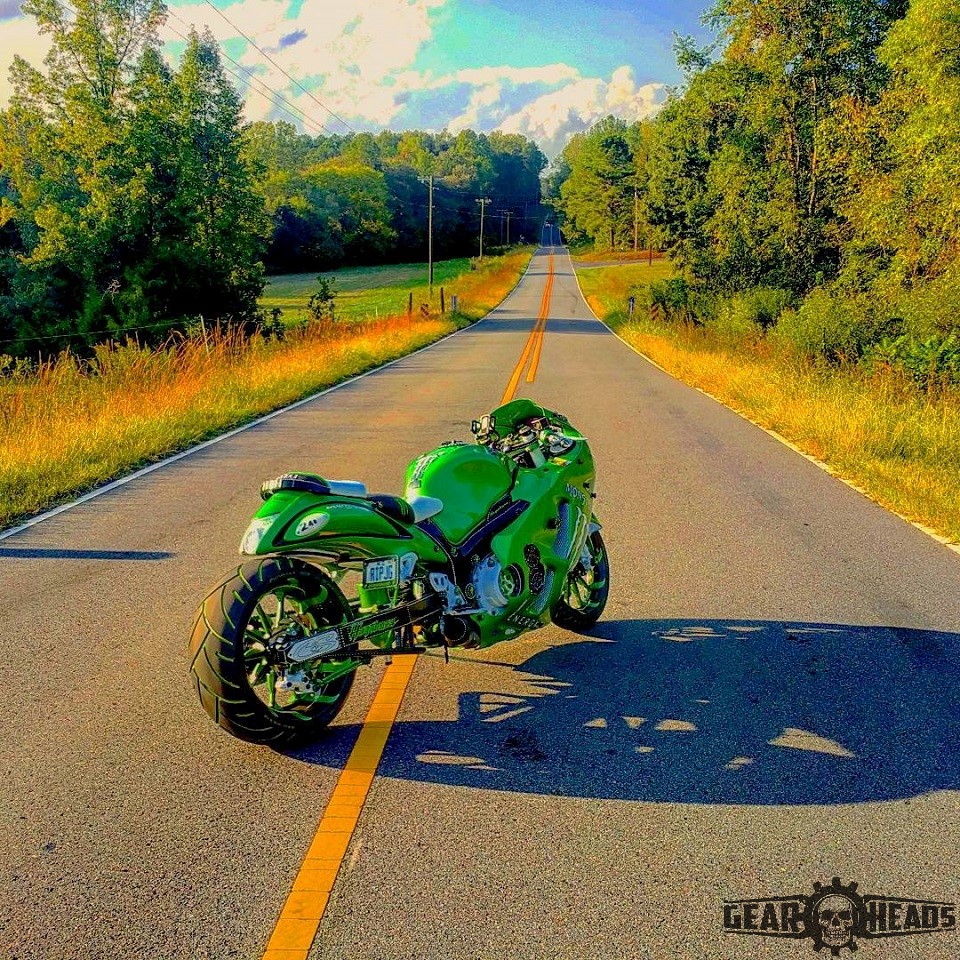 Sound system in place, Randy called in Marcus from Heavy Hitter Cycles to treat the Busa to a new paintjob. Using Synergy Green with a Gold Pearl (reminiscent of a Chevy Camaro) the Monster started to come alive. The paintwork has been twinned with a custom green and flake powder coat in some places, and a black and white in others courtesy of HM Elliot Inc from Mooresville, NC. Even with the spectacular paintwork, Randy still wasn’t convinced that his Monster had enough Energy, so he invested in some awesome LEDs and custom made LED lit gauges from Shane Gaston at Mod My Gauges. Mix the paintwork with the LED rig and add in some color coded cables and fixtures and you’ve got a show winning bike. 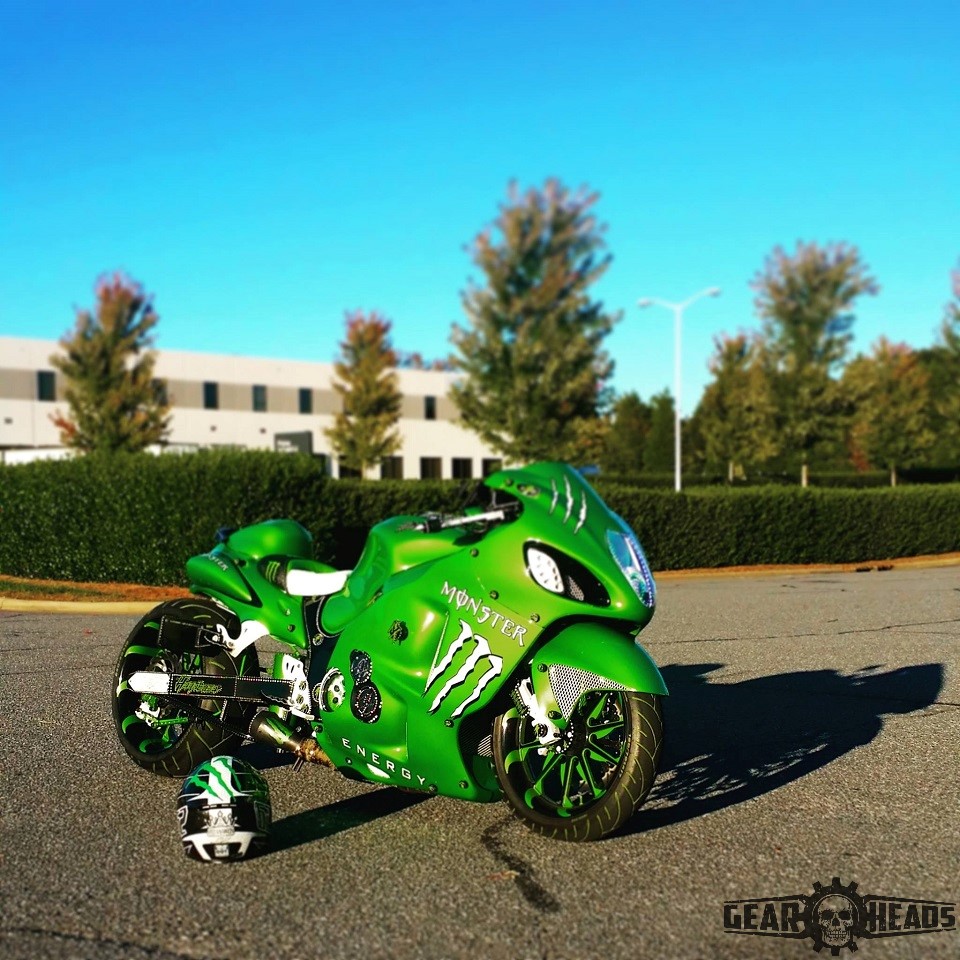 That’s right! Even though Randy’s Monster Bike has only just (really) been finished, it has already snapped up some top honors in show competitions. At the 2016 Plies Car and Bike Show in Charlotte, NC, Randy won Best In Show. And again, at the 2016 Busa Fest, Randy managed to pick up first place in two categories, including the coveted Best Of LEDs. 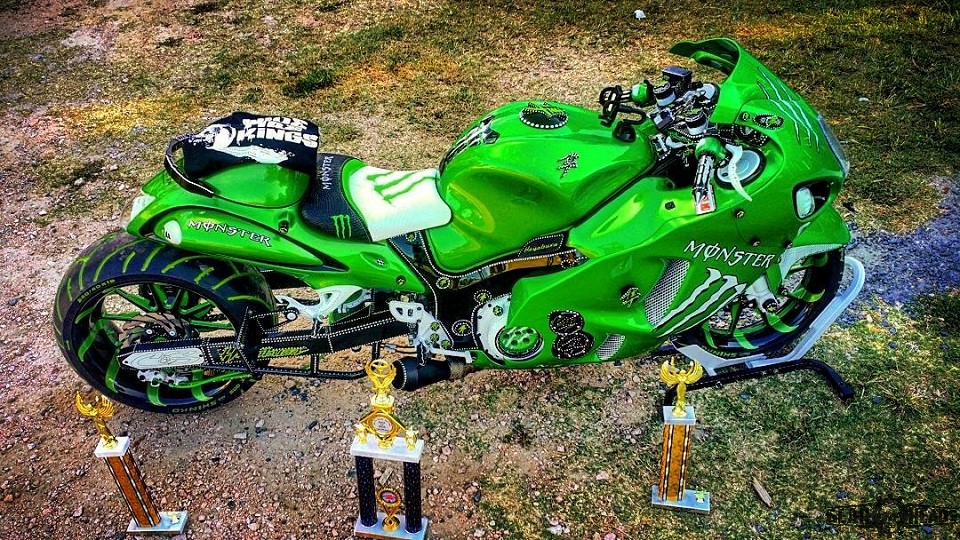 To build such a great and eye catching bike is a Herculean effort, and Randy doesn’t want to take all the credit. He worked on this build with the help of his good friend Dwayne Pendergrass from Prime Time Chrome in Charlotte, North Carolina, and with the support of his loving wife, Megan, and his kids Najire and Janaiya. 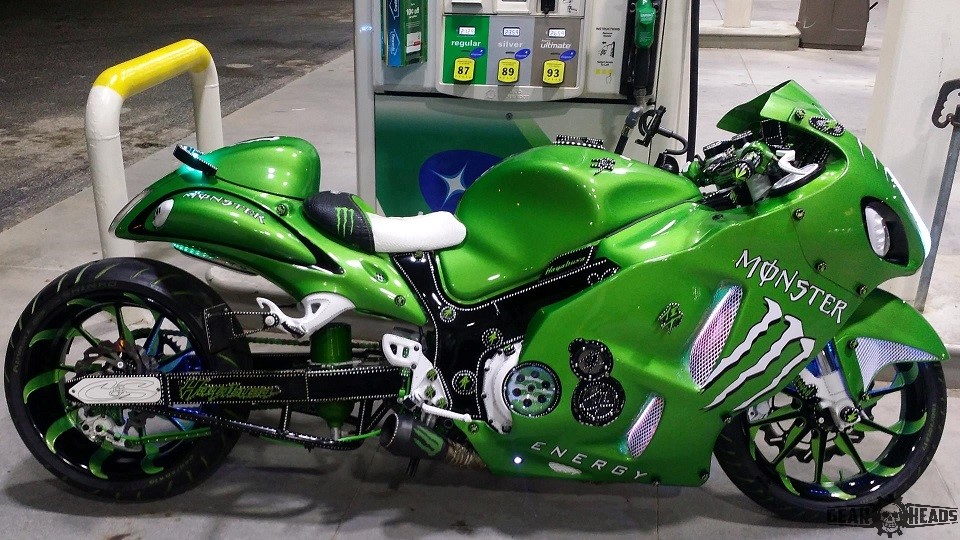 With a spark of inspiration from a well-known logo, Randy has managed to turn a rugged old 1999 Hayabusa into a show stopping, trophy winning, head turning, and mile munching Monster. And we applaud the effort!


Ranking The Best Commuter Motorcycle Models On The Market!
10 Most Striking Yamaha VMAX Customs Ever Made
Everything You Need To Know Before Buying A Pit Bike
Top 10 Easy Mods You Can Do To Improve Your Yamaha R3!
A Turbocharged Hayabusa Will Arrive In 2019 – Apparently!
Honda’s All New Rebel 500 “Bobber”