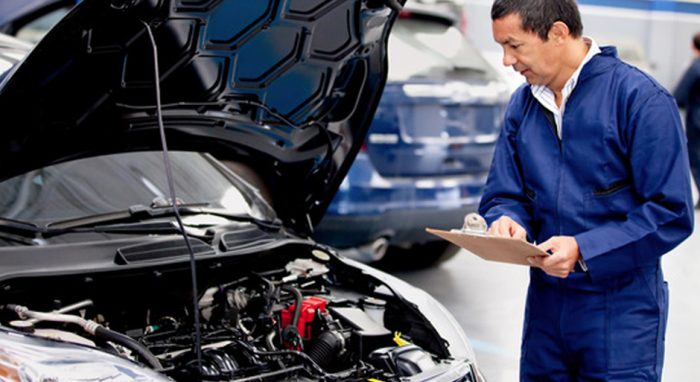 They possess a huge database of both carmakers and models that have undergone service through their system, and they’ve decided to put that dataset to good use. By grouping the maintenance costs of all models in their system, they’ve been able to calculate the average maintenance cost per car manufacturer. Then they’ve listed the first ten years of every single model, and pulled out the 10-year average.

What Are The Highest Maintenance Car Brands? 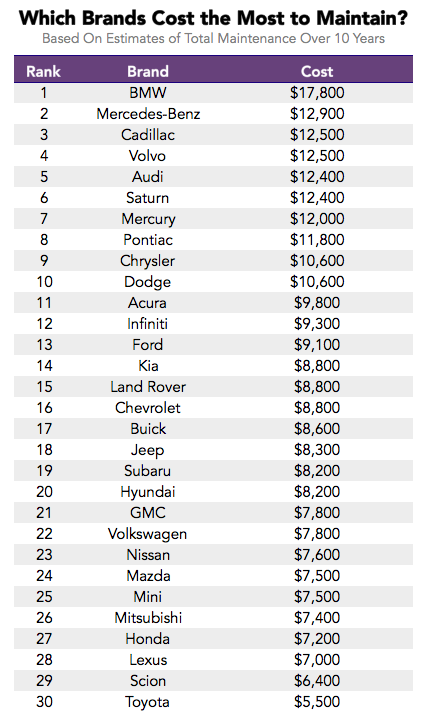 As you can clearly see, the Toyota Motor Corporation’s trio of Toyota, Scion and even Lexus are the cheapest badges to maintain over the first ten years of car’s life, as the cars with the lowest maintenance cost ratios.  Most Japanese brands are placed high on the list with Acura and Infiniti being the most expensive to maintain. They’re still much cheaper to service than the likes of Chrysler, Volvo or Cadillac, and especially the likes of Mercedes-Benz and BMW which are the most expensive car brands to maintain. The average BMW (which is most expensive by far) will squeeze another $17,800 out of your pocket over the course of 10 years. Of course, that’s only the average. A BMW 7 Series will likely take much more than that.

It has to be noted that these are exclusively maintenance costs, though. If breakdown costs could have been taken into account, the end result would have looked much different. How does mileage affect maintenance costs though?

How Much Exactly Does Your Car Maintenance Cost Depending on Mileage?

The statisticians and number crunchers didn’t stop there though – they’ve gone further and analyzed how mileage affects car maintenance costs. Based on countless models of different origin and mileage they have in their base, they’ve calculated the approximate maintenance costs for most major car brands and models alike. According to their calculations, the average car costs $1,400 to maintain for the first 25,000 miles. Here’s the table of average car maintenance costs depending on mileage – from 0 to 200,000 miles. 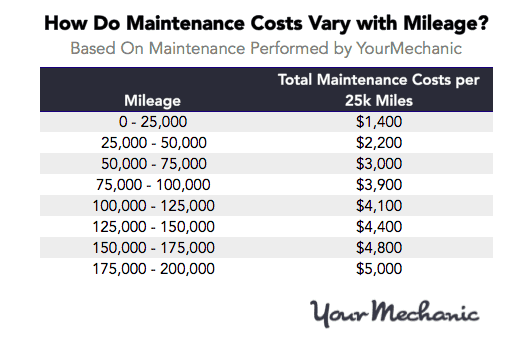 As you can see, maintenance costs soar rapidly throughout all three intervals before the 100,000 mark. They still rise later on, but not as fast as they were before. This may be due to the fact that car owners don’t really care for their cars as much as they did once they have passed the 100,000 mile mark. The next table depicts the 29 car brands included in the research, and their maintenance costs for the first 75,000 miles. 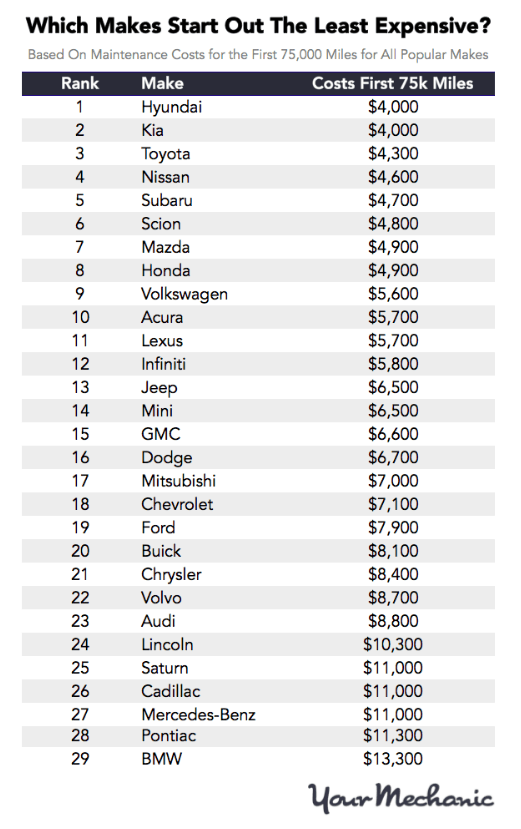 It doesn’t surprise us that Korean cars are the cheapest to maintain and that the German brand sits at the opposite end of the table. Maintenance of Korean and Japanese brands usually takes between $4,000 and $5,000 for the first 75,000 miles on average. What does surprise us a bit is that even Japanese luxury brands like Lexus, Acura and Infiniti are much cheaper to maintain while still rather fresh than domestic makes like Chevrolet, Dodge, Ford, and others. 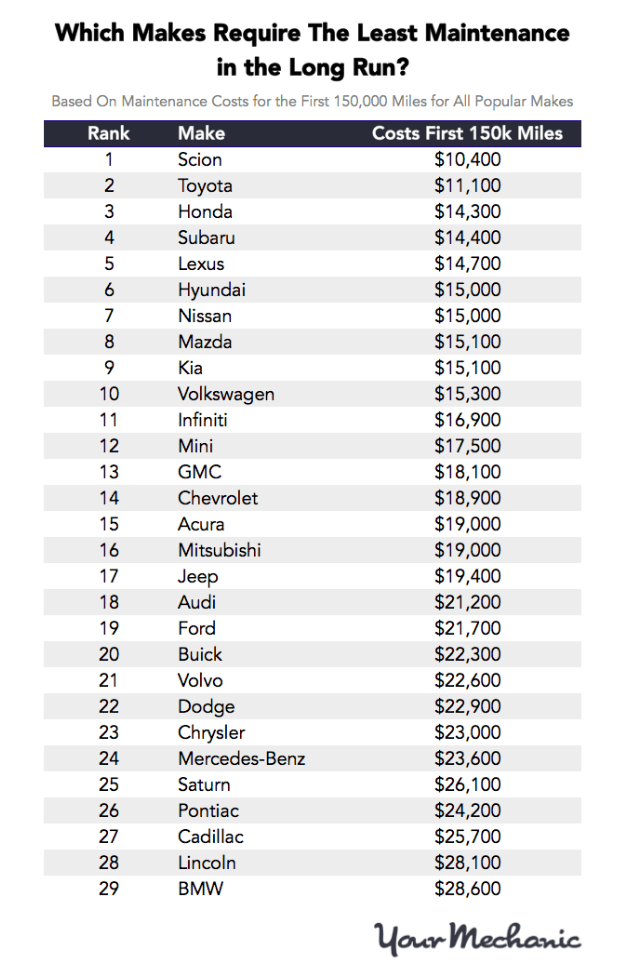 Things don’t remain the same in the long run, though. Hyundai and Kia which were cheapest to maintain up to 75,000 miles have fallen to sixth and ninth spot respectively on the list of brand maintenance costs up to 150,000 miles. Toyota and Scion are clearly the cheapest vehicles to maintain on the long run, and Subaru deserves a honorable mention as well. It too, rose in the rankings as its maintenance costs remain steady or even become cheaper as the odometer numbers complete their circles.

Finally, here are the tables you’re probably most interested in. The irst one shows the car maintenance costs per specific model for the first 75,000 miles. Only 10 of the most and least expensive cars have been listed as there’s simply way too many to cover all of them. 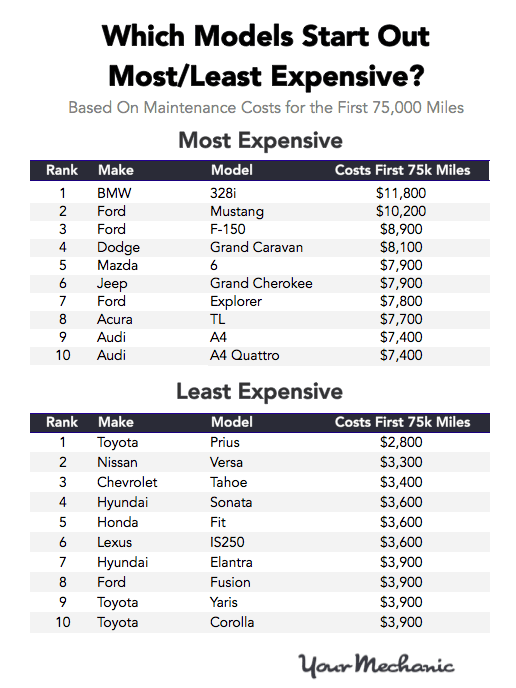 The most expensive model to maintain is the BMW 328i which is closely followed by the Blue Oval duo of the Mustang and F-150. On the other hand, the Toyota Prius, Nissan Versa and surprisingly, Chevrolet Tahoe are the least expensive to maintain for the first 75,000 miles. 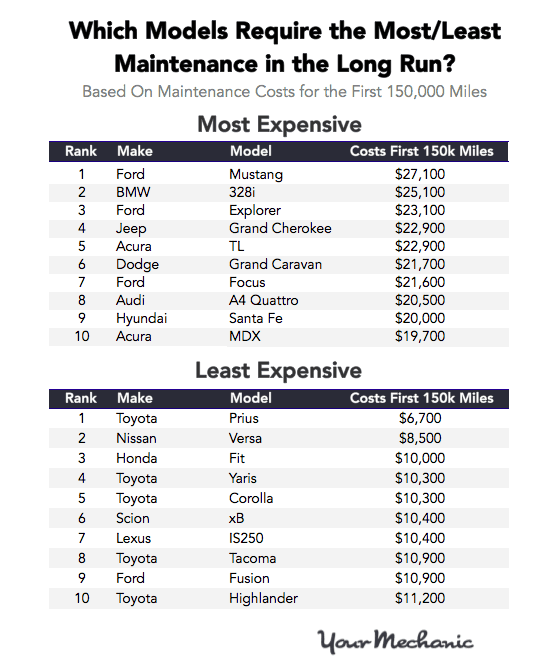 Prius and Versa remain the least expensive cars to maintain on the long run, but the Chevy Tahoe will start taking bigger and bigger bites out of your maintenance budget after it passes the 100,000 mile mark. The most expensive car to maintain up to 150,000 miles is the Mustang which will cost you additional $27,100 over the years. The good folks at Your Mechanic didn’t stop there, however. They have also given us the first hand insight on the frequency of most common issues. Moreover, they have created the graph which clearly shows the correlation between one of these issues and mileage the car has passed. 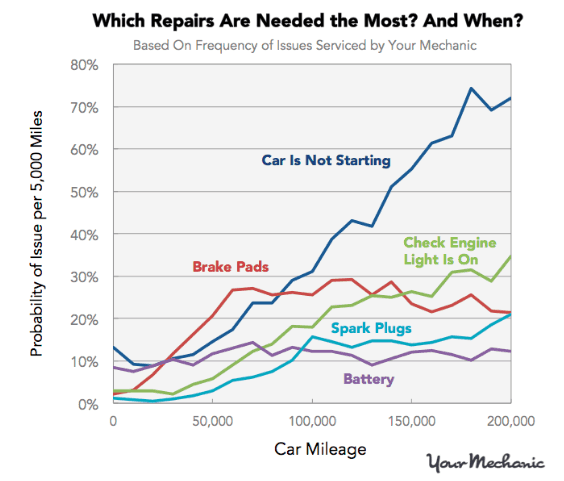 The more you squeeze out of your car, the greater the chance it’ll fail to start. On the other hand, issues with brake pads peak at between 50,000 and 140,000 miles and occur more rarely further on.

Considering all of the above, you might reconsider buying yourself a brand new Mustang if you’re thinking on saving some money in the long run, for instance. Yes, they can be quite affordable in their base form, but you can basically buy another car for the money you’ll spend repairing it over the years. Just a thought. It’s still all up to you.