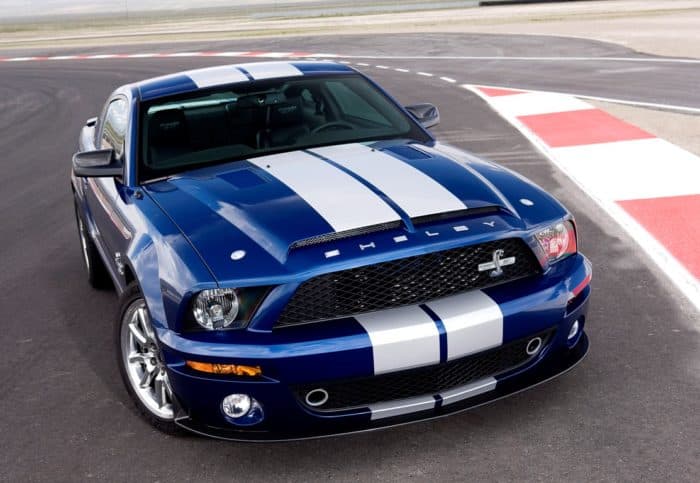 Since its debut midway through the 1964 model year, the Ford Mustang has lived a long and prosperous life, save for a few years here and there *cough*Mustang II*cough*. Within those years, many special-edition models knocked the socks off enthusiasts and collectors alike. These ultimate special editions ranged from limited models with tweaked suspensions and special badges to ones with fire-breathing V-8 powerplants that struck fear in the competition.
We decided to take a look at these special Stangs and make a list of our 10 favorite models. Let us know in the comments if we left off your favorite model or if you think we’re imbeciles for choosing one of the models below.

On top of being quick, the Cobra R also handled well, thanks to an upgraded suspension and chassis, and it looked badass with its massive front and rear spoilers.
The Cobra R is also very rare, as Ford produced just 300 units, making it very desirable.

Yes, there are two Cobras that deserve spots on this list, and the second one is the standard Mustang SVT Cobra. This model ran from 1993 through 2004 and resulted in some of the most awesome `Stangs ever built. Power ranged from 235 horsepower and 280 pound-feet of torque in the 1993 model to 390 horsepower in the 2004 model, resulting in 0-to-60 times that ranged from 5.9 seconds to 4.5 seconds.

What’s more, the Cobra featured plenty of suspension tweaks to help the Mustang handle better than ever, and its limited availability makes it a hot commodity.

Powering the 2012 through 2013 Mustang Boss 302 was a 5.0-liter V-8 that punched out 444 horsepower, which was a 32-pony gain over the stock Mustang GT. This engine mated to a six-speed manual transmission that shipped the power toward a 3.73-to-1 rear axle with carbon-fiber clutch plates.
The Boss 302 was also famous for its handling, as it took the standard GT’s suspension and cranked it up a few notches. The suspension mods included stiffer springs, a thicker rear stabilizer bar, a lower ride height, adjustable shocks, a retuned stability control system, and staggered 19-inch rollers.

There were plenty of Steeda Mustangs through the years, but in 2006, the ultimate one arrived. I am talking about the Mustang Steeda Q525. This beast came with a 5.0-liter V-8 engine with a Steeda/Magna supercharger strapped to it, which pushed the output to 500 ponies and 530 pound-feet of torque.

In 1968, Ford crammed its newly developed 428 Cobra Jet under the hood of the Shelby GT500. The resulting vehicle was the GT500 KR – the “KR” stood for “King of the Road.” Ford rated this new engine at 335 horsepower and 440 pound-feet of torque, but most believe (and the super-high torque indicated) that Ford underrated the horsepower number. Many believe the true number was closer to 400 horsepower.

The engine paired up with a four-speed manual transmission that delivered the oomph to the rear wheels. The result was a 0-to-60 time of 6.5 seconds and a top speed of 140 mph.
What made the KR so desirable is the fact that there were only 1,200 built, which is why these models routinely fetch $150,000 at auction.

The Mustang Boss 351 was not only a badass rig, but it also held a special spot in the Mustang’s lineup. It was one of the last high-performance versions of the Mustang before emissions came along and snipped the manhood from the muscle car segment.

Under its hood was a 351-cubic-inch Cleveland V-8 with an 11-to-1 compression ratio and a 750 CFM four-barrel carburetor. This engine romped out a mighty 330 horsepower and 370 pound-feet of torque, giving it some fine performance numbers like a 5.8-second 0-to-60 sprint and a 14.1-second quarter-mile.
The Mustang Boss 351 was a proper send off before the monstrosity that was the Mustang II launched just a few years later.

Sure it’s brand new at the time of this writing, but the 2015 GT350 certainly deserves a spot on this list. The new GT350 rolls into showrooms with a 5.2-liter flat-plane-crank V-8 engine that pushes 526 naturally aspirated horsepower and 429 pound-feet of twist through a six-speed transmission.

Not only is the GT350 fast, but it is quite agile too, thanks to Pilot Super Sport tires, MagneRide dampers, and Brembo front and rear brakes.
Aerodynamics also plays a big role in making the GT350 awesome. It comes with unique front and rear fascias, a front splitter, rocker extensions, and a rear diffuser.
For buyers who need a little bit more, a GT350R will roll in after the base GT350, and it will feature additional lightweight material, a retuned suspension, special carbon-fiber wheels, and even more extreme aerodynamics.

The Ford Mustang Bullitt arrived following a concept that debuted at the 2000 LA Auto Show received rave reviews. This model featured a slightly modified version of the Mustang GT’s 4.6-liter V-8. The mods included a cast-aluminum intake and a 57 mm throttle body for easier airflow, and a set of high-flow mufflers for a freer exhale. This pushed the 4.6-liter to 265 horsepower and 305 pound-feet of torque, which amounted to 5 horsepower and 3 pound-feet more than the standard Mustang GT produced.

Beyond its extra power, the Bullitt also had a retuned suspension that was firmer and gave the Stang a lower ride height. It also had a brushed-aluminum fuel-filler door and “Billitt” badges.

The Mustang Mach 1 had many iterations, but the one that really fits in this list is the 1969 through 1971 model. The 1969 and 1970 models had a significantly different look than the 1971 model, and some enthusiasts found the latter year a little flabby, but they were all badass nonetheless.