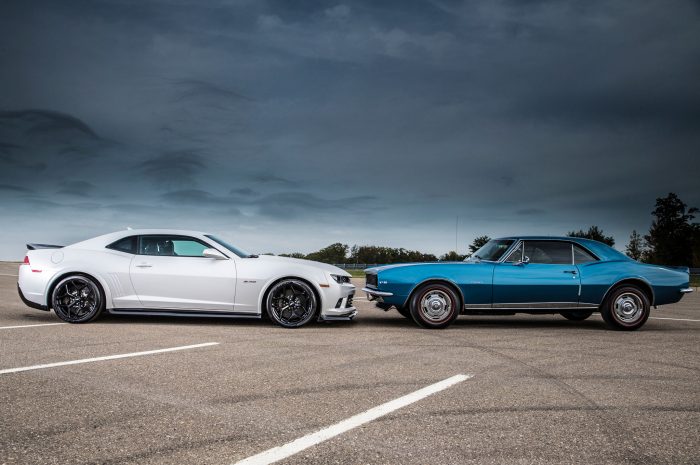 As one would expect, one of America’s quintessential muscle cars, the Chevrolet Camaro, has quite the illustrious history. For nearly fifty years, the mainstay of American Muscle has been the measuring stick by which other cars are measured. From the heady days of the late 1960s, through the lean times of the 1970s, to the new technologies of the 1980s, Chevrolet has finally brought us to modern times, featuring uncompromising power and unprecedented fuel economy in their incredibly well-engineered Camaro engines.

For the most part, Camaro horsepower followed the waves of change, particularly gasoline prices and emissions standards, but always delivered one thing, according to General Motors executive Dean Guard, who said that, “From the day it was introduced, Camaro has been a part of American culture and a reflection of the state of the American performance industry. What has never changed was Camaro’s fun and attainable performance for a broad spectrum of customers.”

The first-generation Camaro, from 1967 to 1969, started with a bang, just the right timing to introduce a new American muscle car, offering a number of engine options, ranging from the 140 hp 220 lb•ft straight-six to the 375 hp 396 in3 Big Block V8. Built for drag racing, sixty-nine special-edition Camaros featured 427 in3 V8 engines, rated at up to 430 hp, though many say this was underestimated.

The 1970s were a tough time for American muscle cars, considering a bevy of new emissions regulations and, of course, the oil embargos of the mid-1970s. The second-generation Chevrolet Camaro, from 1970 to 1981, reflected those changes in style. With a new focus on eliminating lead from gasoline, better fuel economy, and emissions regulations, General Motors had little choice but to reduce fuel consumption, which meant a corresponding decrease in power. In fact, by 1975, the most powerful Camaro V8 only generated 155 hp! The Big Block did not survive the transition, but the Small Block did.

Over the third generation, 1982 to 1992 Chevrolet Camaro benefited from the development of new technologies, increasing power without sacrificing fuel economy and emissions. Throttle body fuel injection was slightly more efficient than the old carbureted engines, increasing fuel economy and power, and was implemented in the first straight-four engine ever seen in a Camaro, a 2.5 ℓ generating a whopping 92 hp (88 with carburetor). Adding fuel injection to the V6 and V8 engines came later, first throttle body injection, then port fuel injection, such as in the 245 hp 350 in3 engine in the 1990 model, the most powerful since 1973.

After nearly a decade, Camaro came back, this time more powerful than ever. The fifth-generation Chevrolet Camaro, from 2010 through 2015, started with more standard horsepower than ever before, 323 hp and 30 mpg in the 2012 V6, something totally unheard of in super-300 hp days of the first-generation Camaro. In the same year, the 2012 Chevrolet Camaro ZL1 set an entirely new bar in horsepower, an unprecedented 580 hp and 556 lb from a supercharged 6.2 ℓ Gen III Small Block V8. Even the 2014 version of the 427 in3, the naturally-aspirated 7.0 ℓ found in the Camaro Z/28 blows away the original, generating 505 hp and 481 lb-ft of torque.

What will the future hold? As the 2015 Chevrolet Camaro marks the end of the fifth generation, we can’t wait to see what the 2016 Camaro has under its hood!


What is "Top Tier" Gasoline and Should You Care?
The Best Car Duster of 2020
Fox-Body Mustang Hoonicorn: Ken Block Dreams Up The Hoonifox
10 Emerging Collector Cars That Are Starting To Increase In ...
Ultimate Restomod Muscle: Ringbrothers 1969 Dodge Charger "C...
Extremely Rare and Cool Special Edition Packages and Limited...