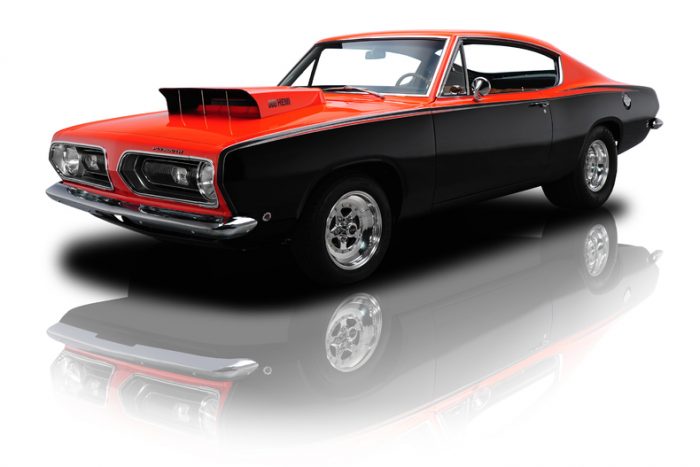 Hemi represents 3 generations of among the most powerful engines made over 65 years, and we’ve dared to the pick the 10 best Hemi powered cars and trucks.

While the concept had already existed for decades, Chrysler further developed the hemispherical cylinder head (half a sphere) as part of a new aircraft engine design for the US Army Air Corp during World World II. A prototype XIV-2220 V-16 Hemi engine was fitted to a Republic P-47 Thunderbolt which was reported to have achived  500 mph in level flight. By then, it was clear that jets were the future and the project was dropped. Luckily for enthusiasts, Chrysler saw an application for the cylinder head design in passenger car engines.

First introduced in 1951 in the Chrysler New Yorker, the first really hot Hemi was the  355 hp 354 CID  version created for the 1956 Chrysler 300B – the first V8 in an American passenger car to offer one horsepower per cubic inch. 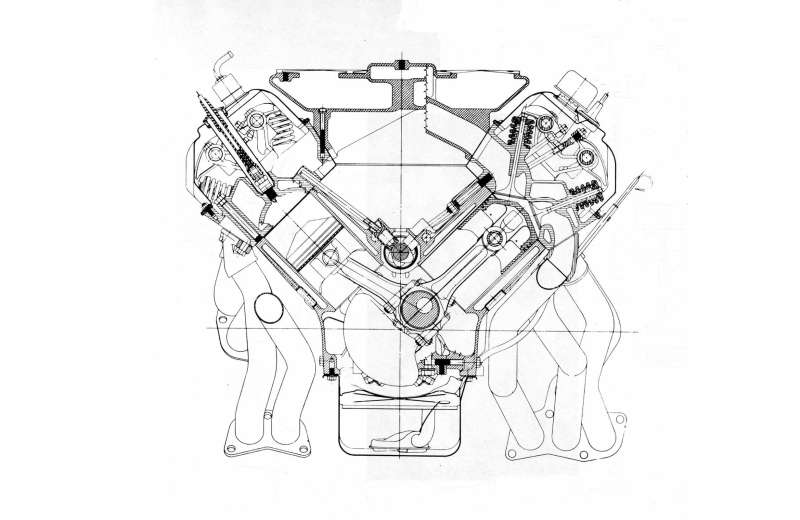 The 392 Hemi was the ultimate form of the Generation I version of the engine, and would go for several year to be the engine of choice for drag racers until the Generation II Hemi became available. In 1958 a dual four-barrel version of the 392 available in the 1957-58 Chrysler 300C & 300D cars was rated at 375 hp. An extremely rare option available on the 1958 300D was Bendix Electrojector fuel injection system,  which boosted the 392 to 390 hp. Unfortunately the technology of the day wasn’t up to the task and 15 of the 16 300D cars built with the Electrojector option were recalled and retrofitted with carburetors. 1958 was final year of the Generation One Hemi. 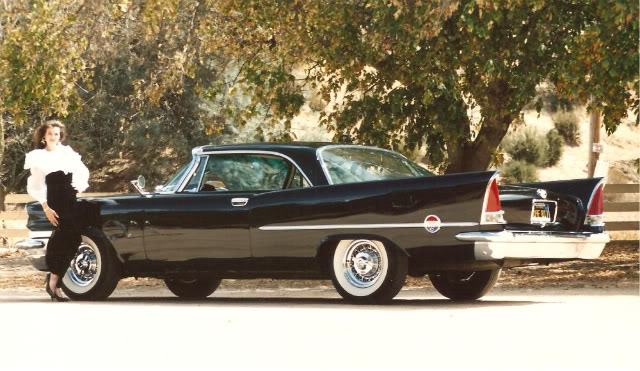 Chrysler needed to install the Generation II Hemi engine, nicknamed the Elephant, into street cars to satisfy NASCAR’s requirement that the motor actually be available to consumer in order to compete in stock car racing. For the 1966 model year, Chrysler developed a “street” version of the race-bred Hemi, with the internal designation of A102. It differed primarily by using a lower compression ratio (from 12.5 to 10.25:1), milder valve timing, different intake and exhaust manifolds, and cast iron heads (instead of aluminum) for reliability.  The Street Hemi was ordered in 2,792 Dodge Coronets, Plymouth Belvederes, and Plymouth Satellites in 1966, and of those we selected the Belvedere two Door Sedan as it was both the lightest and the least-expensive of the group, making it an excellent choice for sanctioned and non-sanctioned drag racing.

One of the rarest, and fastest, of all Hemi-powered cars is the B029 Plymouth Barracuda Super Stock built for 1968. The full race A990 version of the 426 Hemi was stuffed into the lightweight Plymouth Barracuda (along with Dodge Darts) to create unbeatable Super Stock racers. NHRA required manufacturers to build at least 50 identical cars to be eligible for Super Stock, so Chrysler created 55. The Barracuda body was stripped of seats, sound deadener and anything else extraneous, including the rear view mirrors. The doors were acid-dipped, the front fenders and hood molded in fiberglass, all windows replaced with thinner glass and the seats were swapped for the lightweight Dodge A100 van buckets mounted on special aluminum brackets. The Hemi was race-tuned with a cross-ram manifold, Hooker headers and 12.5 compression ratio. It was mated to a manually shifted 727 TorqueFlite automatic with Hurst floor shifter. The limited slip Sure-Grip differential had a 4.85 ratio. The Barracuda SS was capable of a 10 second quatrer in 1968, and with performance improvements made by owners over the years, some cars have dropped into the 8s. 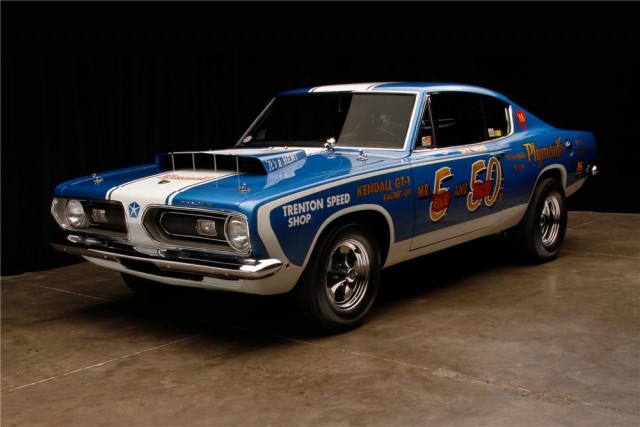 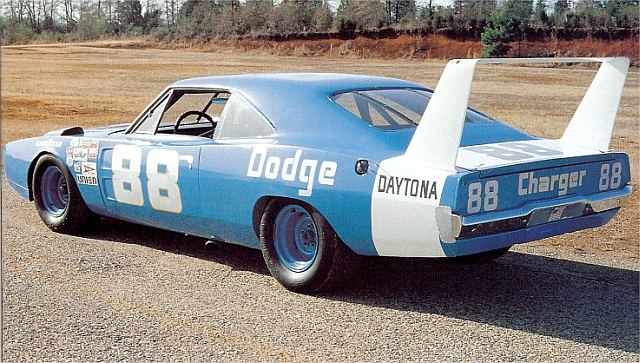 The 1969 Dodge Charger Daytona was created for the sole purpose of winning high-profile NASCAR races, with among other changes a 23-inch-tall wing on the rear deck, a special sheet-metal “nose cone” that replaced the front grille. It won its first race out, the inaugural Talladega 500. With a record pole speed for the race of 199 mph, Chrysler returned with Buddy Baker on a clandestine mission to break 200 mph, which they did. A closed-course record that still stands for a stock-bodied automobile. Charger Daytona wasn’t as dominate as might have been expected, winning two races in 1969 and another four in 1970. The 1970-only  Plymouth Superbird clone won 8 races, all of which were won  by Richard Petty.

The street version came standard with Chrysler’s 440 CID Magnum V8. Optional was the 426 CID Street Hemi V8 engine, which were ordered for only 70 of the 503 Daytonas manufactured.

Among the rarest, and most valuable, of all Classic Era Muscle Cars are the 1970-1971 Dodge Challenger and Plymouth ‘Cuda convertibles equipped with Hemi engines. For 1970 the pair were offered on their own platform, sharing nothing with the economy car Valiant as earlier versions had. Considered by many to be the most attractive American cars of the era – they were low and wide, with a long hood and short rear deck. Coupled with a 426 Street Hemi engine, you’d think they’d have sold by the boatload, but that wasn’t the case. Plymouth sold 14 Hemi convertibles in ’70 and ’71 combined while Dodge sold only 4 in ’70, dropping the option in ’71. Despite some of the greatest marketing of Muscle Cars ever (colors like Sub Lime, Top Banana, and everyone’s favorite: Plum Crazy), a variety of decal packages, and the option of a Shaker hood, Chrysler was just a little too late to the market, but left behind some of the most amazing cars of the era. 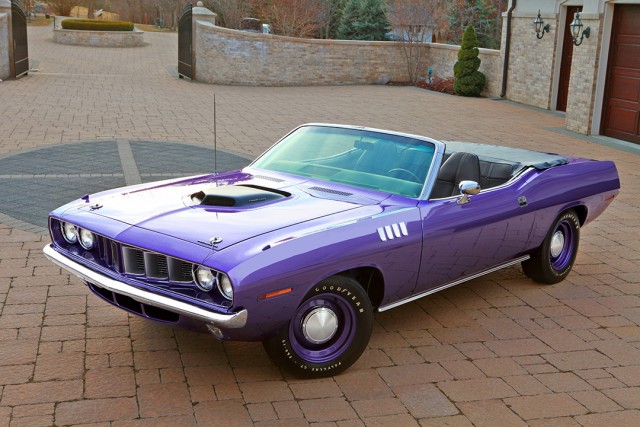 As it had in the late 1950s, the Hemi engine disappeared in 1971, the concept not to be resurrected until 2003 for the Dodge Ram 1500, 2500, and 3500 pickup trucks. Despite the fact that nearly forty years had passed since the 426 Elephant motor was designed, engineers took the advice from Tom Hoover, one of the 426’s designers.  Three of his major suggestions — raising the camshaft (to shorten the pushrods, reducing valve-train inertia and simplifying the rocker arms), using twin spark plugs, and adding squish area (to make light load/low speed efficiency better and reduce emissions) were adopted for the new design, thus creating a substantive link between the Generation II and Generation III engines. And like its Generation I predecessor, it produced one horsepower per cubic inch, but while meeting emissions and fuel economy standards. Though the 5.7 L started as a light truck engine, it opened the door all subsequent Generation III motors . 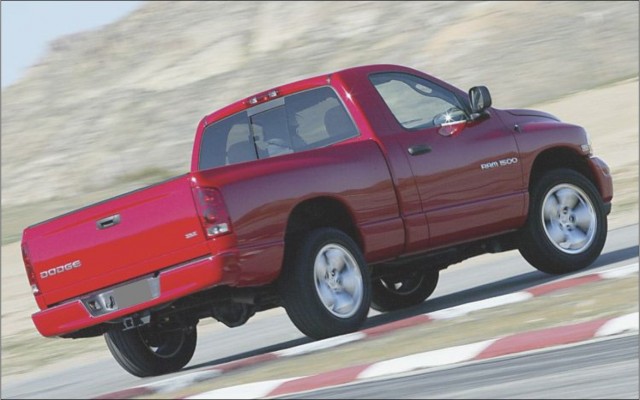 Chrysler reached back to some old Classic Era Muscle Cars tricks while adding plenty of new technology to create the 6.2 L Hellcat motor, the most powerful Hemi ever offered to the public in a new Dodge. Based on the rugged 6.4 L block, with deep skirts and cross-bolted main bearing caps, engineers installed a forged 5.7 L crankshaft to shorten the stroke – a shorter stroke provides close to the ideal rod to stroke ratio and provides the 6.2 to operate efficiently at high rpms. But the magic’s not just inside the engine. An integrated supercharger system from the Japanese IHI company (that also supplies AMG) combined with a fuel injection system with such a high flow rate that it could empty the fuel tank in just 13 minutes of wide open throttle. Apparently the 707 hp Chrysler rates the engine is below its ultimate capabilities. 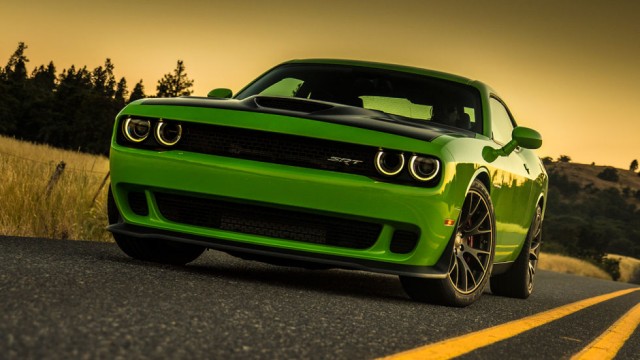 With the Hellcat’s 707 hp comes through the magic  of supercharging, the 6.4 Hemi creates it’s power the old-fashioned way – through cubic inches.  And what more fitting displacement (except the Elephant 426) than the largest Generation I Hemi, the engine that launched the Hemi into legendary status by powering Top Fuel racers through the mid-60s – the 392. The Generation III 392 far outpowers its predecessor, producing  485 hp. And to top it off (literally) is the return of the Shaker hood, which not only assure a flow of fresh air into the engine, but but twists with every application of the throttle. 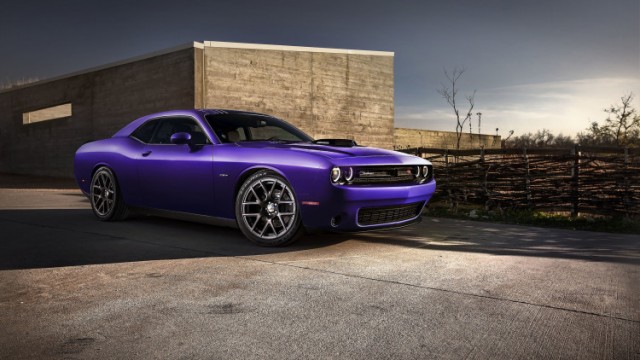 Like the 1968 Barracuda Super Sport  we looked at earlier, the Dodge Challenger Drag Pak is  a factory-prepped package car specifically geared for NHRA Sportsmen drag racing, with the option of either the  supercharged 354 CID Generation III Hemi engine or a newly developed version of the  naturally aspirated 426 CID Gen III Hemi engine, which produces 540 hp in crate motor trim, likely producing closer to 600 hp in full-race trim. 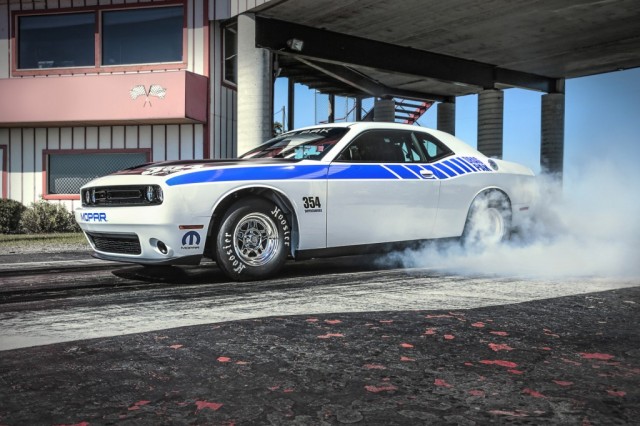