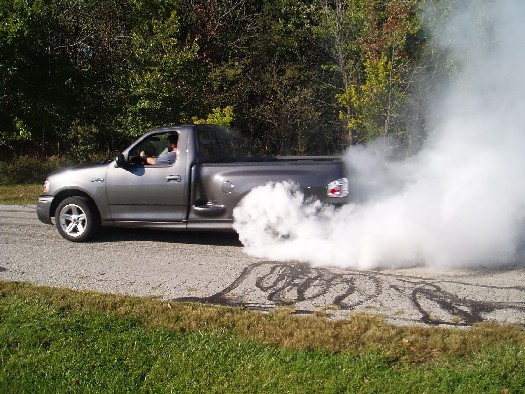 Pickup trucks are generally thought of as workhorses, not hot rods. Corvette-smoking haulers may seem weird, but they do exist, and not only that – they’re pretty darn awesome. Nothing beats a rig with a 6-foot bed, towing capacity and the ability to properly shred a set of Goodyear rubber.

Over the years, almost every pickup manufacturer has offered a sport truck. Most of these rigs are built in limited quantities, making them either rare or exceedingly so. When they are found, sport trucks can pack more fun than almost any other vehicle on the road. Here’s a lineup of 10 sport trucks built to put a smile on your face. 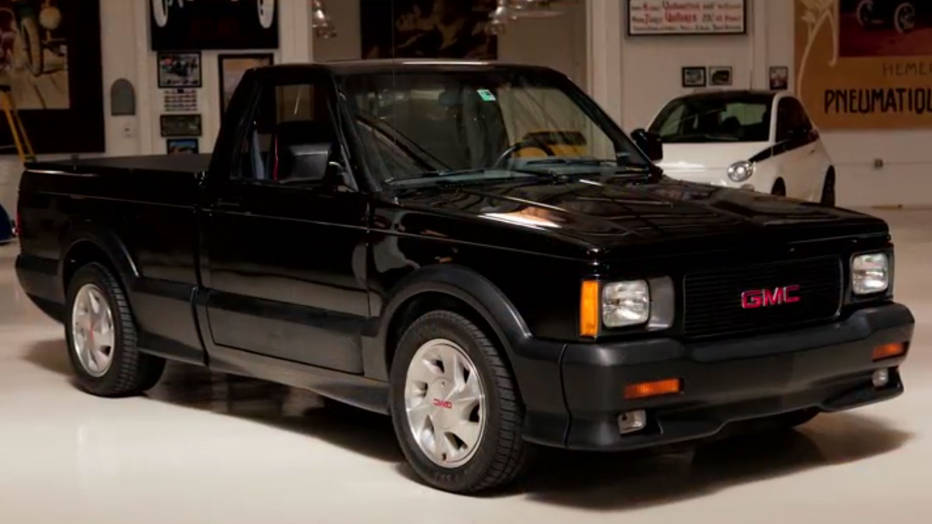 Let’s face it, the GMC Sonoma doesn’t get much respect. All the admiration goes to the full-size GMC Sierra, not the runty GMC Sonoma. In 1991, GMC engineers decided it was time to create a Sonoma that could stand up for itself – thus, the Syclone was born.

The Syclone is powered by a 4.3L turbocharged V6 producing 280 hp and 350 ft-lb of torque. This six-pot is of the same lineage as the V6 found in the legendary Buick Grand National. The Syclone employs a 4L60 automatic transmission along with standard all-wheel drive. It’s also worth noting that the Syclone was the first truck to have four-wheel anti-lock brakes.

Not bad for a little guy, Sonoma, not bad at all. 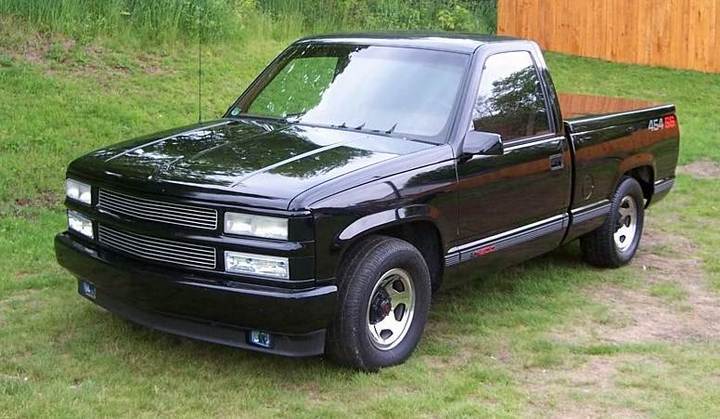 The Chevy 454 SS is easily identified, in true GM pickup fashion, by its prominent side-mounted decals. But the pickup isn’t just some wimpy rig hiding behind a bunch of stickers – it’s the real deal. 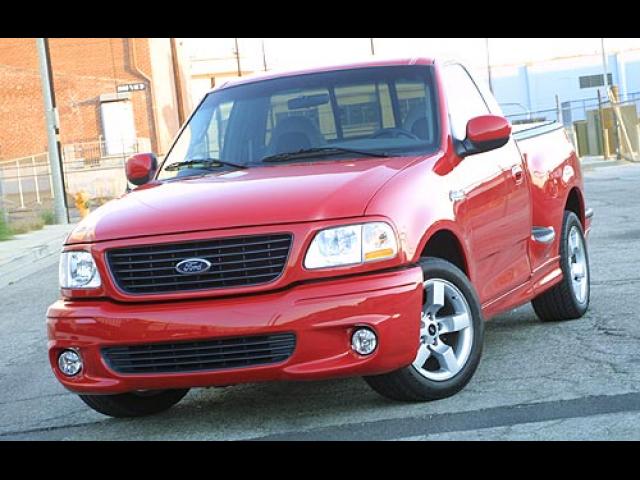 America’s best-selling truck, the Ford F-150, can easily be transformed from a cowboy Cadillac to a hot rod. Ford’s Special Vehicle Team (SVT) worked to make this happen with the F-150 Lightning.

From 1993-1995, the first-generation F-150 Lightning rolled off the assembly lines. The first gen gets power from a 240 hp 5.8L V8 engine. The transmission is a beefed up E40D automatic, which sends torque to the rear wheels.

After a 4-year hiatus, the second generation appeared in 1999.  This Lightning is powered by a 5.4L engine and is capable of cranking out 360 hp and 442 lb-ft of torque. Power gets to the rear wheels via a 4R100 automatic transmission.

There’s an old saying, “fast as greased lightning”. With the F-150 Lightning in the game, it takes on a whole new meaning. 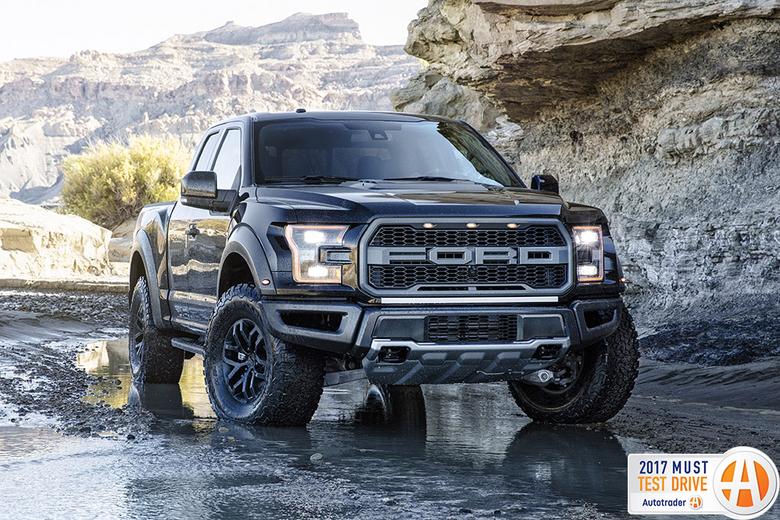 And of course, you can’t talk about the Ford Lightning without also mentioning its replacement – The Ford Raptor. The first-generation model was produced from 2010-2016. There are two V8 engine options found in the first gen: a 5.4L and a 6.2L. The 5.4L is good for 310 hp and 365 ft-lb of torque. On the other hand, the 6.2L churns out 411 hp and 434 lb-ft. A 6R80 automatic transmission and four-wheel drive are standard fare.

Model year 2017 marked the long-anticipated release of the second-generation Ford F-150 Raptor. This time around, the ferocious Raptor came packing a twin-turbo EcoBoost V6 that makes 450 hp and 510 lb ft.

The Ford Raptor is built for high-flying acrobatics, not fuel economy or practicality. After all, MGP counting is for hybrids and the Raptor eats Prius econoboxes for breakfast. To do what it does best, catch some air, the Raptor is equipped with long-travel suspension, performance shocks and a bunch of other off-road goodies. 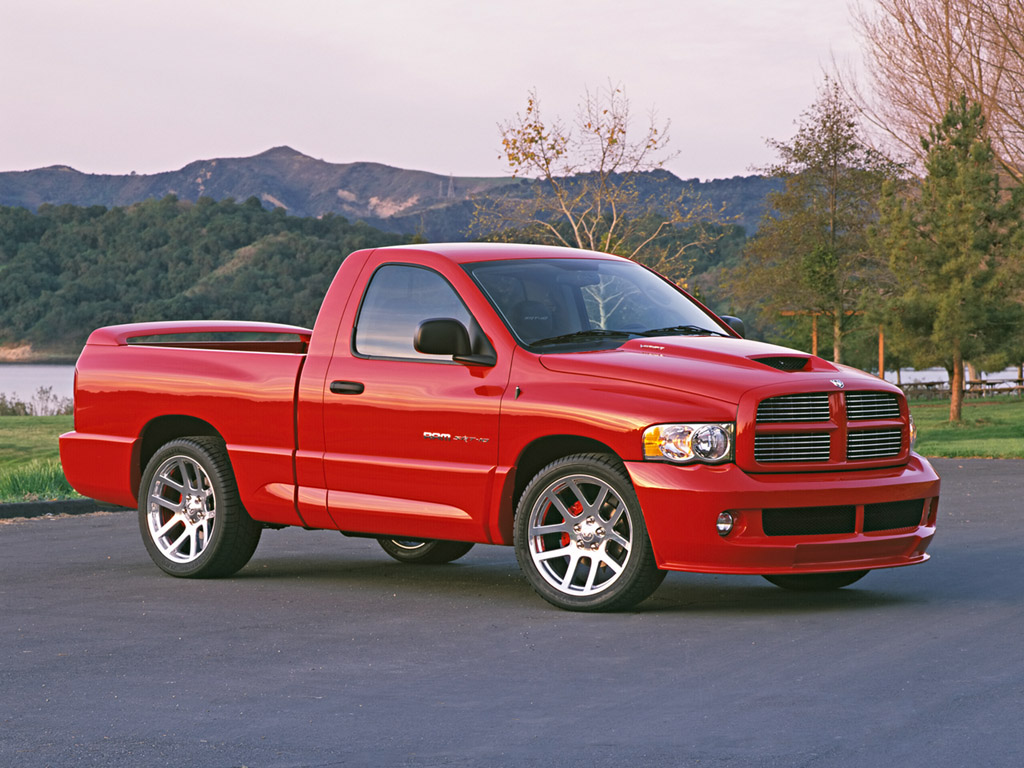 What do you get when you combine the Dodge Viper and Ram? The Ram SRT10, one of the coolest trucks ever made. As the name implies, the Ram SRT10 is powered by a V10. The engine makes 500 hp and 525 lb-ft and is sourced from the Dodge Viper sports car. The only transmission option is a 6-speed manual paired with rear-wheel drive.

In addition to the powerful drivetrain, the SRT10 features sport-tuned suspension and upgraded brakes. The exterior stands out as well, thanks to the prominent hood scoop and blinged-out 22-inch wheels. Production of the Dodge Ram SRT10 lasted from 2004-2006. 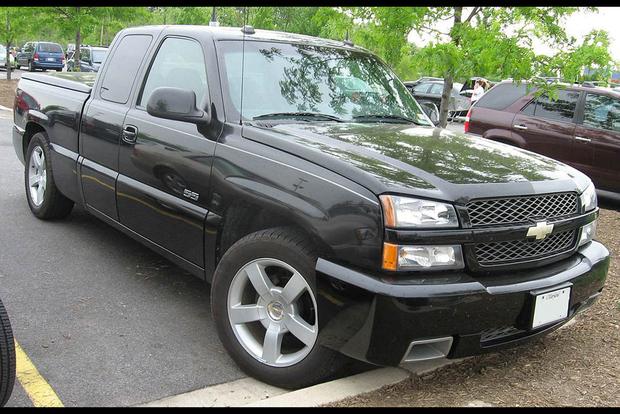 To appease nostalgic bowtie fans, Chevrolet introduced a new Silverado SS in 2004. Although the original Chevy 454 SS was great for the time, the modern version was much improved.

Under the hood of the late-model Silverado SS, you’ll find a Vortec 6.0L V8 good for 345 hp and 380 lb-ft of torque. The transmission is a stout 4L65 and full-time four-wheel drive is standard. This makes for a potent combination in any weather.

The Silverado SS makes it apparent that – as good as the good ol’ days were – modern technology is better. 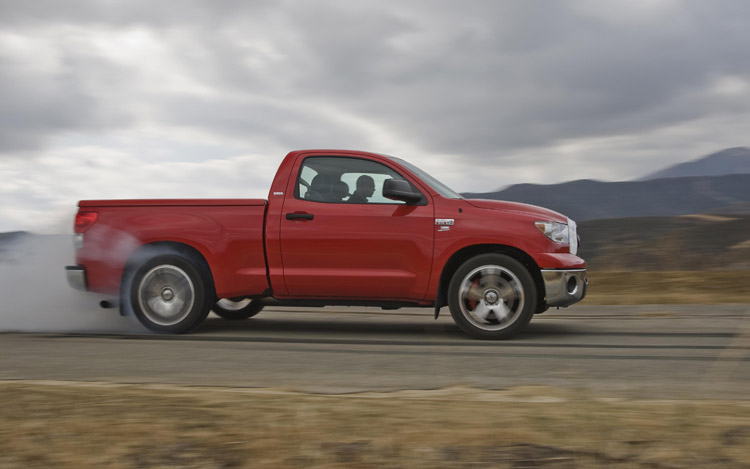 At least one import had to break into the top 10 sport trucks. The Toyota Tundra TRD Supercharged is a beast capable of giving any Yankee truck a run for its money. A blown 5.7L V8 making 504 hp and 550 lb-ft of torque powers the Tundra. This is far more power than either the Silverado SS or F-150 Lightning of the same era. Other perks offered by the Japanese rig include track-tuned suspension and gigantic 22” wheels (because, you know, big rims make it go faster). 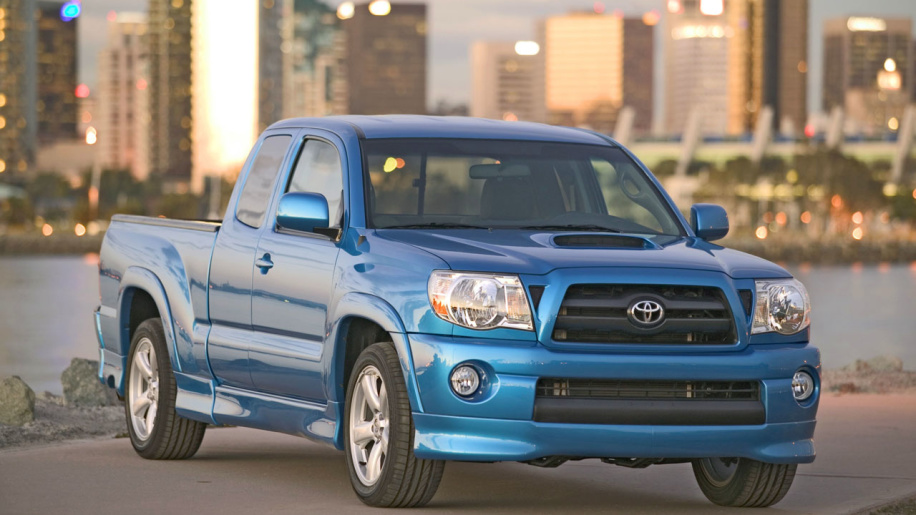 Like it’s big brother, the Tundra TRD Supercharged, the Tacoma X-Runner gets a boost from forced-air induction. A blown 4.0L V6 producing 240 hp and 270 lb-ft makes the X-Runner one of the fastest compact trucks ever. For those who like to row their own boat, the speedster mini-truck comes equipped with a 6-speed manual transmission. The X-Runner is rear-wheel drive, which helps it out at the drag strip.

Of course, if you’ve got a performance truck you want everyone to know it. The X-Runner certainly looks the part with its body kit and hood scoop. This is one Fast and Furious pick-em-up truck. 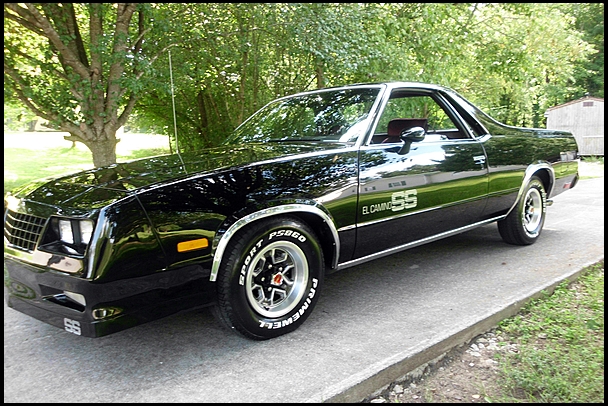 Is the El Camino a truck or a car? Since it’s got a 79.5” bed, the majority votes pickup truck. Regardless of which side of the debate you’re on, you’ve got to admit the El Camino SS is cool – in an 80’s mullet kind of way. The El Camino SS was built by Choo Choo customs and sold through Chevrolet dealerships from 1983-1987. What differentiates the SS from the rest of the Elky lineup is an appearance package, complete with ground effects. The SS bits are pillaged from the El Camino’s fraternal twin, the Monte Carlo SS.

Admittedly, the El Camino is more about looks than power, as it features the same drivetrain as other model El Caminos. The engine is a 5.0L V8 producing a pathetic-by-modern-standards 194 hp (the Elky is from the 80s after all). A TH200-4R trans sends power to the rear end. 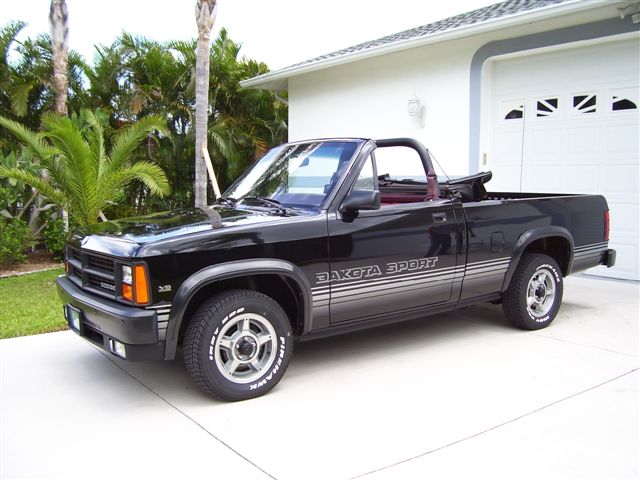 A convertible and a pickup truck, what’s not to love? Well, in the case of the Chevy SSR, there’s not a lot to get mushy over. But another convertible muscle truck, the Dodge Dakota Sport, redeems the admittedly-small convertible truck segment.

Although considered a “performance truck” in its time, the little Dodge doesn’t really live up to its Sport name. After all, there’s really nothing sporty about a 125 hp V6 engine. As for transmission options, the rig can be had with a five-speed manual or three-speed automatic (look ma, no overdrive!). None of that really matters, though, when you’ve got a full-size pickup bed and the wind in your hair.

There’s a wide world of sport trucks out there – and you need one. Don’t just exist in life driving a boring four-door sedan. Go out and seek adventure, go out and find yourself a fast truck. Burning rubber in a sport truck is one of the most effective forms of therapy available.


What Happened to the Jeep Comanche?
What The @?#&! Were They Thinking? The Pontiac Aztek
Check out 10 Illegal Car Modifications Banned In Some States
Cheap Supercars: Go For Brand New Cars Or Buy Second-hand Un...
The Best Mustangs From 12 Eras of Pony Car Perfection
Ranking the Best and Worst Lamborghini Models for 2020