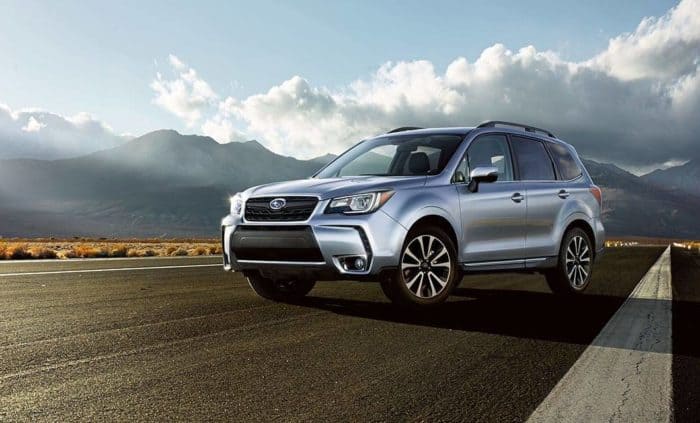 Getting from point A to point B can be a hassle sometimes, especially if you’ve got a family and gear to tow as well. But what about those times the family isn’t around? Or when you want a little more go to get around traffic? If you’re in the market for a 4-cylinder SUV, then this list is for you. We’ve compiled 10 of the most exciting 4-cylinder SUVs available that will either get your heart pumping with exciting performance or back up the luxury department with big power in a small box.

What Is The Best 4 Cylinder SUV On The Market? 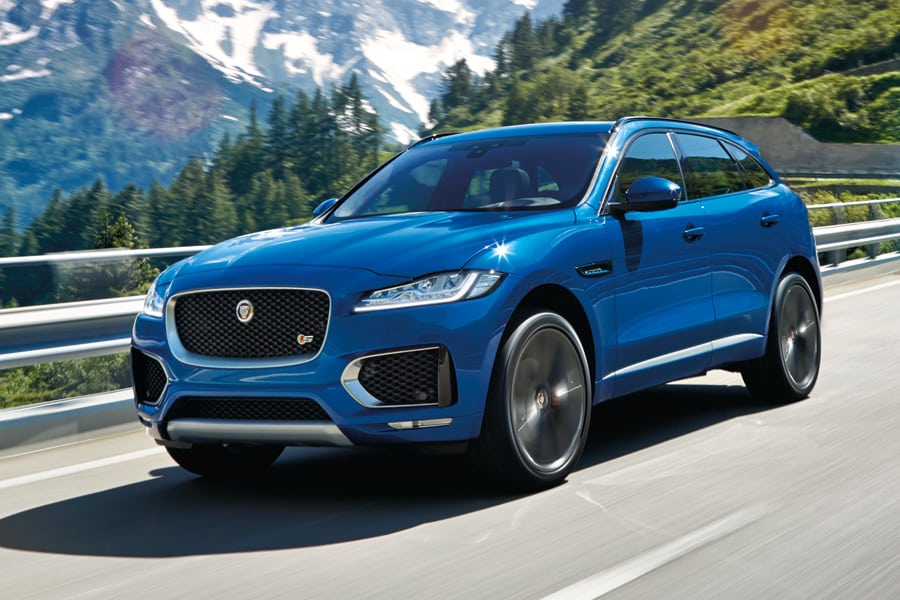 The Jaguar F-Pace is still a very new vehicle, but in its short tenure, has impressed the masses with sophisticated good-looks, great handling, and phenomenal power from the V6 lineup. While the base model F-Pace came to us last year with a 2.0L turbo-diesel inline-4 engine good for 180 hp and 318 lb-ft of torque, Jaguar has a new offer on tap for 2018. With standard AWD, the F-Pace now has another engine option: the 2.0L turbo-four petrol engine.

The new 4-cylinder makes 247 hp and 269 lb-ft of torque and has an alleged fuel economy rating of 38.2 mpg – though this has yet to be properly tested. It does 0-60 in 6.4 seconds, offers seating for five, and gets a solid loadout of basic luxury features.

This exciting and luxurious 4-cylinder SUV starts off at $42,065. 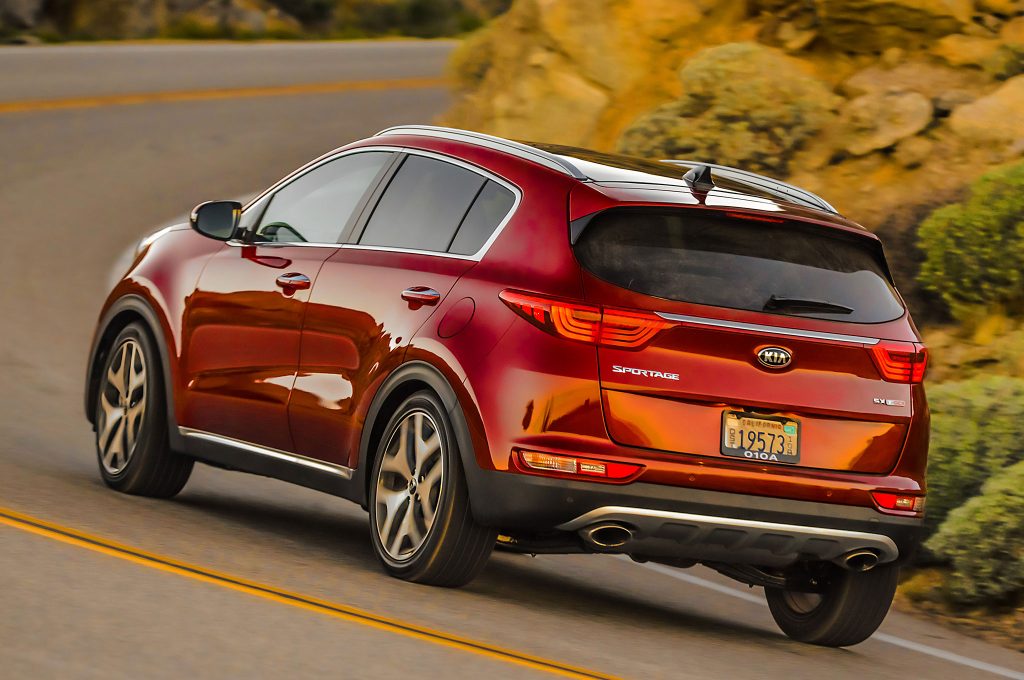 Unless you’re considering buying the new Kia Stinger GT, Kia isn’t exactly a brand associated with exciting cars. It may surprise you, then, that Kia’s popular Sportage CUV offers a 2.0L turbocharged 4-cylinder engine capable of 237 hp. It seems that Kia still hasn’t seemed to figure out the perfect balance of performance and fuel economy, as this model only gets 20 mpg city and 23 highway. That being said, it’s definitely quicker than the likes of the Subaru Crosstrek, Honda CR-V, and Toyota -RAV4.

While traditionally outfitted with FWD, the Sportage SX Turbo does feature optional all-wheel drive, as well as a Harmon-Kardon sound system, LED headlights, 4-wheel disc brakes, and a panoramic sunroof. This turbocharged four-cylinder is an absolute beast and one of the best SUVs on the market.

This neat little package can be yours starting at $32,800.

While the Juke has had no shortage of complaints about its off-putting looks since its 2011 debut, Nissan hit back hard with an interesting dilemma: The Juke NISMO RS.

The NISMO RS takes the ugly little ball that is the Nissan Juke and refines it into a sporty and – dare I say – good-looking car with plenty of power on tap. Available in FWD with a 6-speed manual or AWD with an 8-speed CVT, the NISMO RS is powered by a 1.6L direct-injected turbo-four good for 215 hp and 210 lb-ft of torque. The RS sees a slight improvement in performance with a bump up from the 188 hp of the Juke NISMO.

No matter how cool you make it, the Nissan Juke will always be an acquired taste; it’s really that simple. Nonetheless, if you (like me) think the NISMO RS package makes this 4-cylinder SUV finally worth it, you can pick one up starting at $28,020. Failing that, there’s always the Nissan Rogue – another excellent SUV from Nissan with a four-cylinder engine. 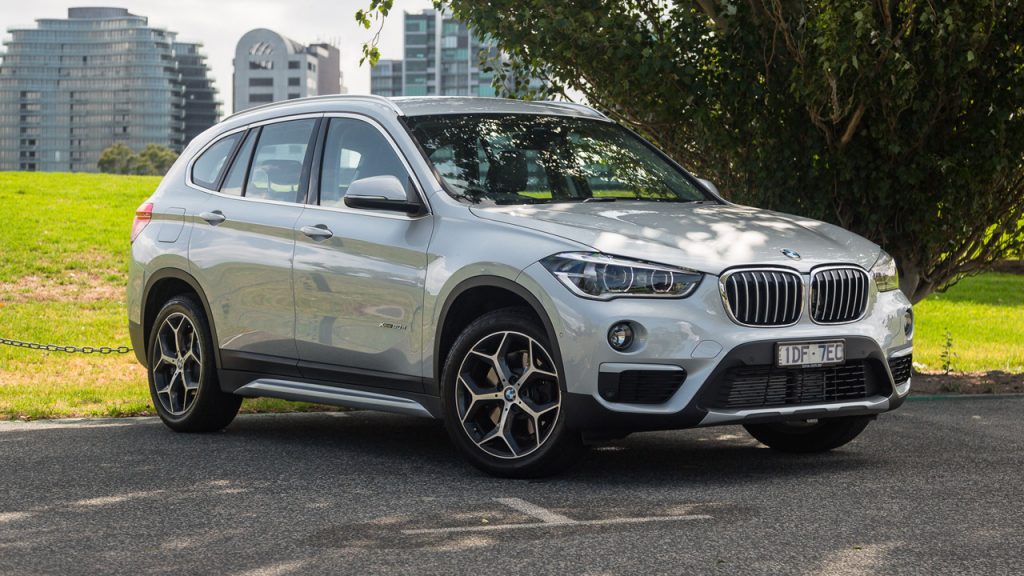 Any car from BMW is all but guaranteed to be luxurious inside and out. With standard features like 8-way adjustable power seats, programmable daytime LED running lights, a leather-wrapped steering wheel, leather/woodgrain interior, and an almost over-protective array of airbags, the X1 does not disappoint.

Powered by a 2.0L turbo-four making 228 hp, the X1 zips from 0-60 in 6.3 seconds thanks to a smooth and widely-praised 8-speed automatic transmission. This entry-level Bimmer SUV is small and compact enough to maneuver through tight spaces, but boxy enough to feature adequate cargo room. The BMW X1 starts at $33,750. 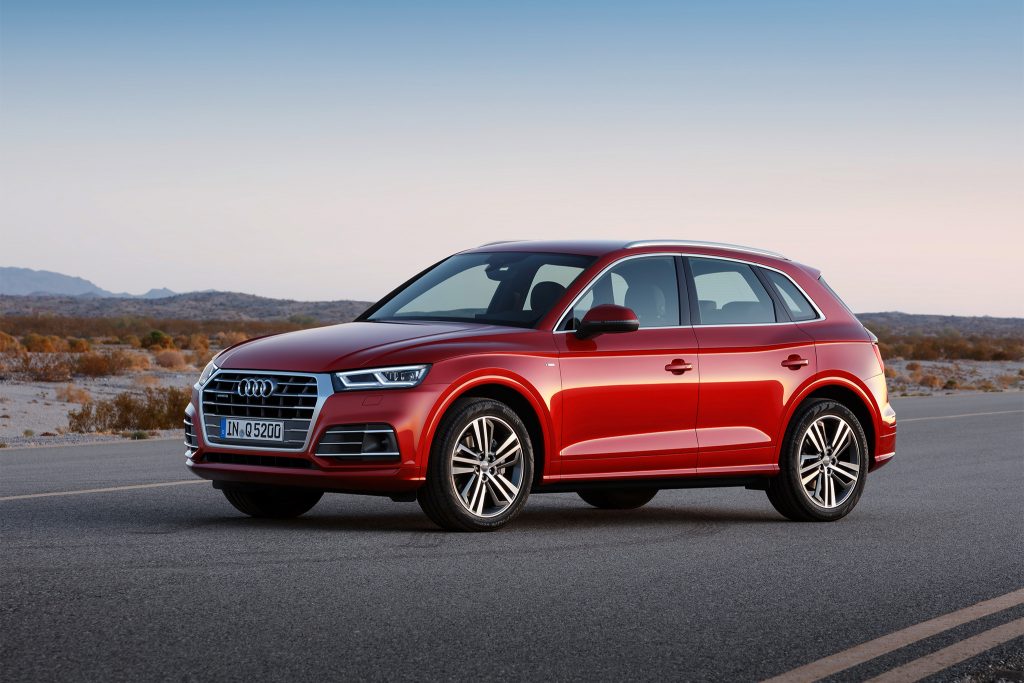 Audi has long been associated with powerful, fun, and luxurious AWD vehicles, and the Q5 is no exception. This 4-cylinder SUV comes with standard AWD, a well-appointed interior, and plenty of modern gadgets. The 2.0L turbo-four packs an impressive 252 hp and 273 lb-ft of torque, and is capable of a 0-60 time of just 5.8 seconds, making it one of the quickest options in this segment.

The 2018 model is getting the first full re-work since the Q5’s introduction in 2009; in addition to the new powertrain, the Q5 also received an updated 7-speed dual-clutch automatic transmission. While the Q5 does come with AWD, it is only accessed by changing the driving mode – otherwise, the vehicle operates in FWD most of the time.

While the electronic steering has deterred some reviewers from passing it with flying colors, most agree that it is a very refined piece of German machinery. Armed with decent cargo space, a smart Infotainment system and an unparalleled driving experience, it can be yours starting at $42,475 for the current model year. 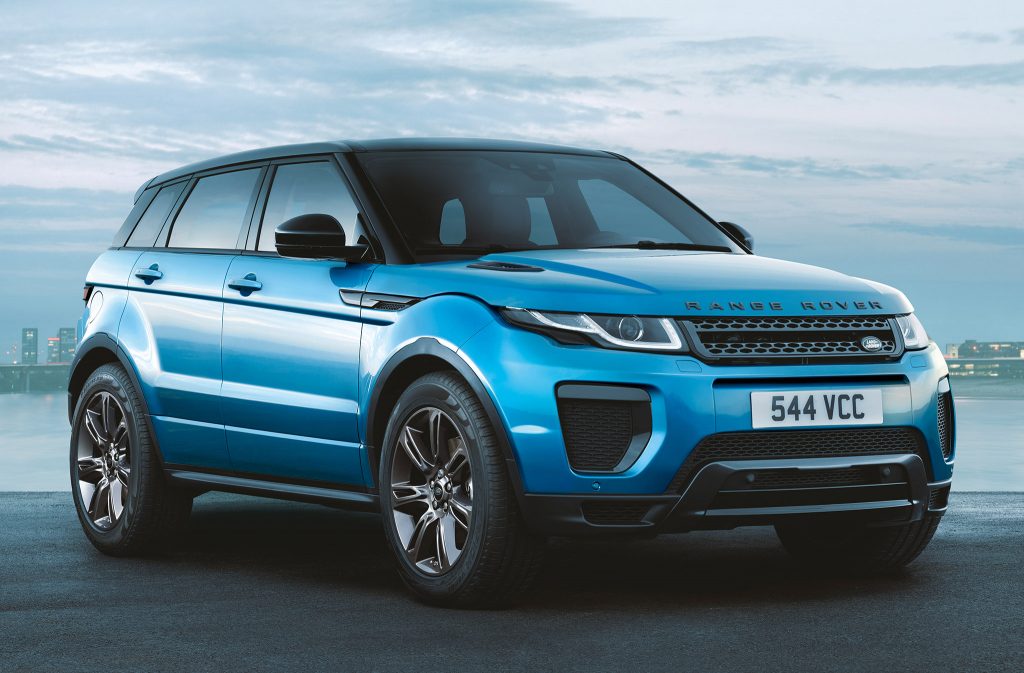 This stylish offering from the desk of Victoria Beckham, the Evoque offers a compact “high and tight” approach to traditionally clunky, off-road capable Land Rovers. The Evoque is much more suited for the street, and as such, has caused reviewers to denote it for overly firm suspension and a stiff ride. While the Evoque does sacrifice practicality for appearances, it doesn’t make it any less fun to drive.

The small and tight-handling Evoque is powered by a 2.0L turbo-four that produces 240 hp and 250 lb-ft of torque. The main thing to know about the Evoque is that it was designed to look appealing. It doesn’t necessarily do anything better than other models in the segment, but it’s one of the best-looking for sure.

This stylish yet somewhat underperforming 4-cylinder SUV starts at $42,795. 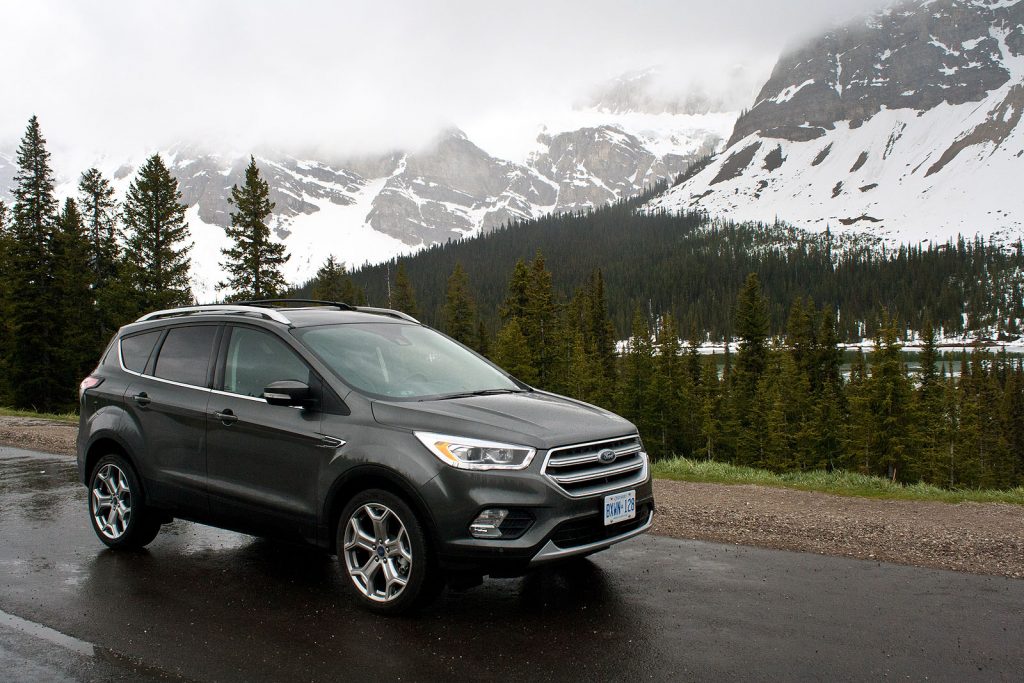 More towards the bargain bin, the Ford Escape isn’t exactly renowned for its performance and handling. Much in the same bag as the Kia Sportage SX Turbo, the base model Escape can be improved upon with both a 2.0L EcoBoost 4-cylinder engine good for 245 hp as well as optional AWD.

The Escape has a ton of storage capacity, gets pretty respectable gas mileage (23 city/30 highway), and has plenty of room for 5 adult passengers. While the base model Escape doesn’t exactly come loaded with features, there are plenty available if you’re looking to ball on a budget. The 2.0L engine and AWD are options on both the SE and Titanium trim levels. While past iterations featured a noisy conglomeration of buttons and dials, the 2017 Escape was updated with a much cleaner interface featuring an 8-inch color touch display. 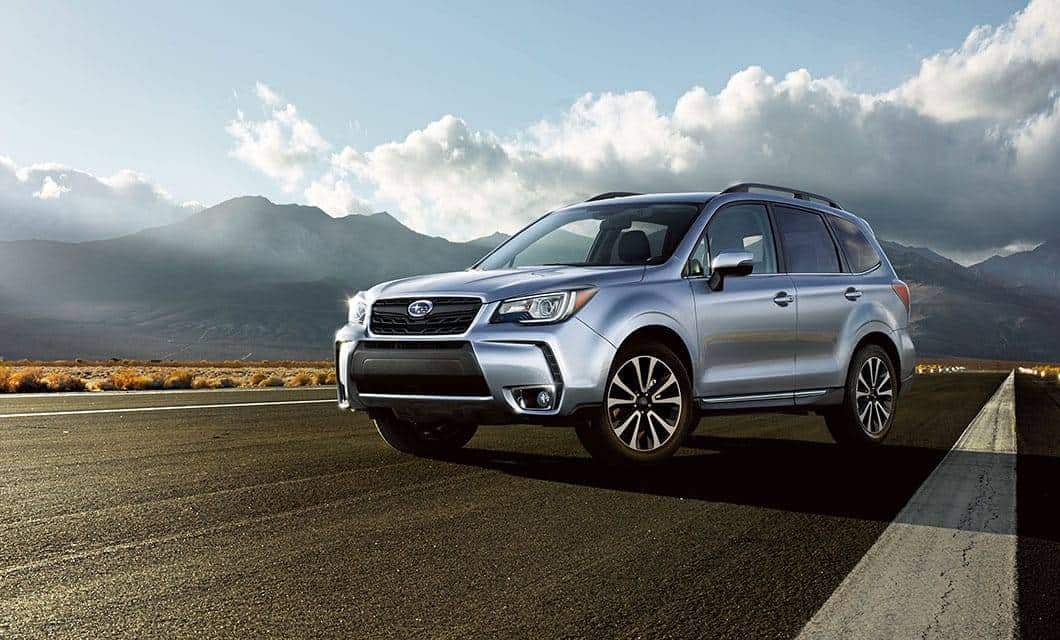 While the base model Forester isn’t exactly known for its launch times, it does come with one of the roomiest interiors in its segment. With plenty of storage space, Subaru AWD standard, and off-road capability right out of the box, the Fozzie is and always has been a fan favorite.

So what happens when you take a wonderful SUV and slap a turbo on it? A big beautiful family wagon with enough go to beat a V6 Cherokee. The 2.0L 4-cylinder turbocharged engine on board the XT is good for 250 hp and is one of the best-looking family SUVs on the market. With standard equipment like a panoramic moonroof, reclining rear seatbacks, automatic climate control, and raised roof rails for easy cargo hauling, the Forester XT has the power and capability to do damn-near anything you want, on paved roads or dirt.

The Forester XT is arguably the best bang-for-your-buck 4-cylinder SUV on this list, and starts at $29,295. 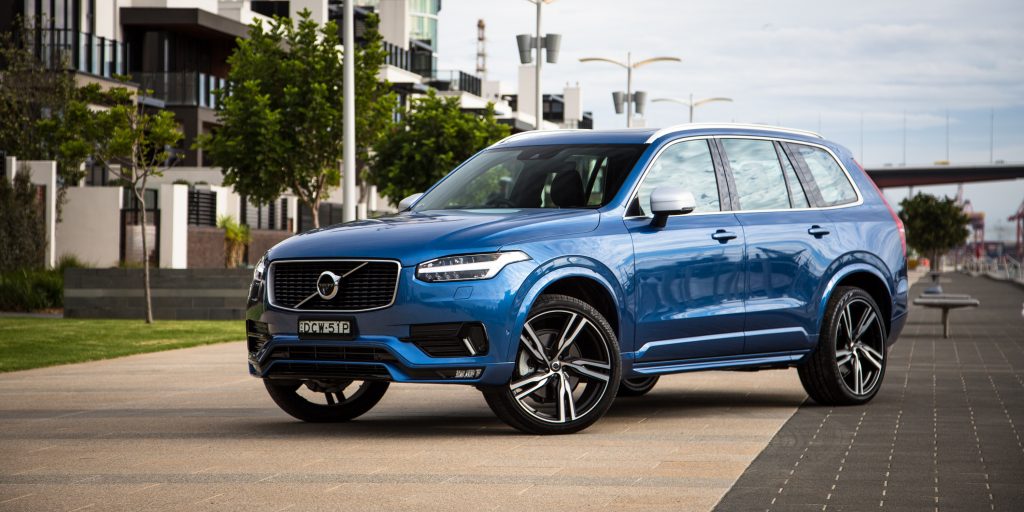 If you’re aiming for the luxury bracket, you can’t do much better than this: The Volvo XC90 T6 R-Design Momentum. It’s both beautiful, and a mouthful. The XC90 T6 R-Design differs from many of the SUVs on this list because it is a proper full-size 4-cylinder SUV with third-row seating and everything!

The 2.0L 4-cylinder engine in the T6 R-Design, very surprisingly, is twin-charged (supercharged AND turbocharged) and generates 316 hp and 295 lb-ft of torque. With room for 7 passengers and standard AWD, the T6 delivers significantly more smiles per gallon than most traditional family SUVs. While the actual gas mileage is 20 mpg city and 25 highway, the true showstopper is in the beautiful Scandinavian design.

The interior is appointed with lush surfaces and sprawling leather, and features a very functional 12.3-inch touchscreen display. The T6 R-Design is also backed by Volvo’s exceptional safety equipment and sturdy design. This exceptional Volvo SUV starts at $56,250. 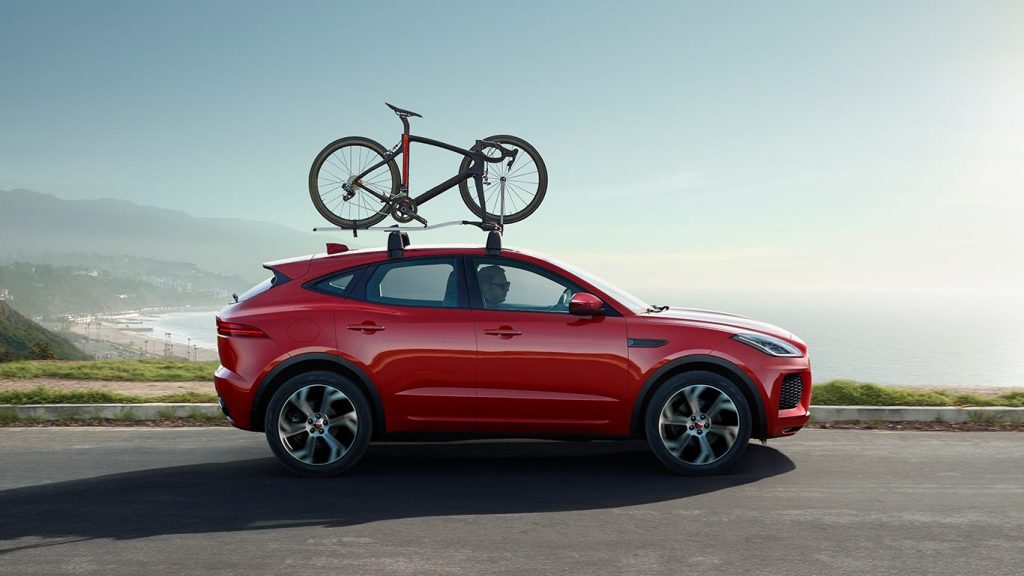 We started with a Jaguar, and we’re ending with one too. The E-Pace is Jaguar’s up-and-comer, built in response to the growing CUV epidemic. The E-Pace takes everything fun and great about the F-Pace and crams it into a CUV platform.

With the 2.0L inline-four from the updated F-Pace engine making 246 hp and 269 lb-ft of torque, the E-Pace is sure to deliver even greater happiness than its bulkier brother. When you take the handling dynamics, power, and cool features of the F-Pace and throw it in a fun-sized package, it’s going to be quicker, lighter, and more agile than ever before. While the E-Pace doesn’t go on the market until early 2018, it is sure to hold up to the rest of the brand’s offerings.

The E-Pace is projected to start at $38,600, but there’s also the R-Dynamic to consider. With 286 hp and 295 lb-ft of torque from a slightly beefier 2.0L 4-cylinder, the R-Dynamic comes with an appearance package and handling improvements over the base E-Pace. That being said, it’ll run you at least $47,250 before options.

Shopping For The Best 4 Cylinder SUV?

Shopping for a 4-cylinder SUV can be a monotonous task if you stick to the industry leaders’ bread and butter cars, but there are plenty of exciting options out there too. While your budget may suffer a bit in the process, there are still plenty of used impressive 4-cylinder SUVs out there just waiting for an appreciative new owner. What are these best used cars? Well, if a 4 cylinder SUV is still your desired weapon of choice, why not take a gamble on a GMC Terrain, Hyundai Santa Fe, Hyundai Tucson, or Chevrolet Equinox? All worthy 4 cylinder SUV models, but just not quite as good as the models listed above!