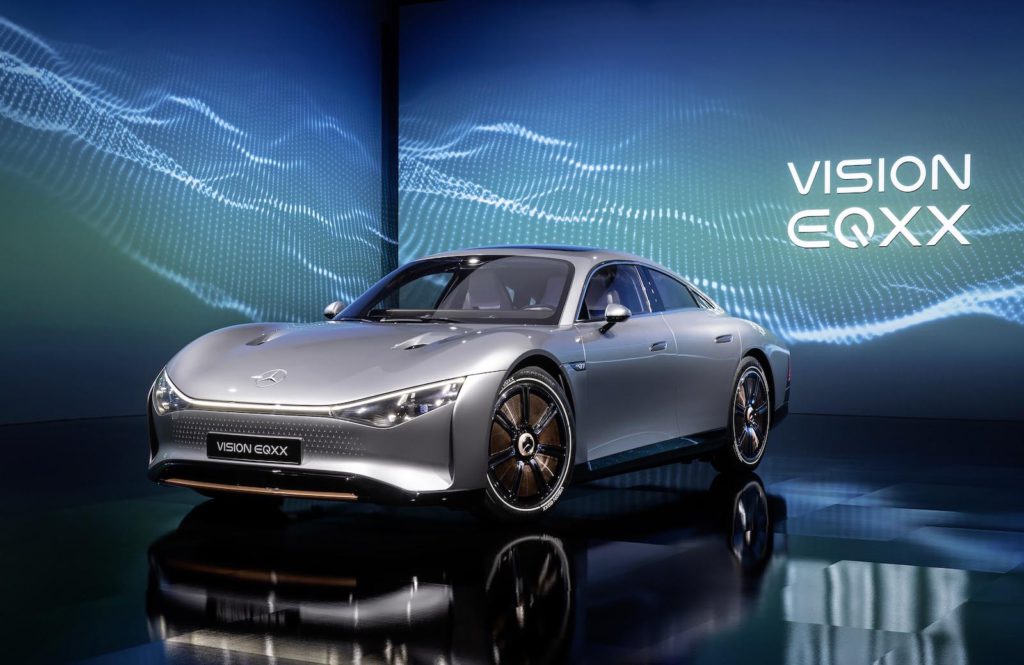 The new Mercedes Vision EQXX concept is a “blueprint” for the future of electric vehicles, or so says Mercedes-Benz.

What’s clear is that the coupe-like electric sedan that made its debut today at the Consumer Electronics Show (CES) pushes new boundaries when it comes to design and efficiency, yielding more than 600 miles per charge.

“The Vision EQXX is all about creating a holistically better electric car that looks stunning and futuristic,” said Ola Källenius, chairman of the Board of Management of Daimler AG and Mercedes-Benz AG, during a virtual CES presentation.

Slow to enter the battery-electric vehicle space, Mercedes is determined to make up for lost time. It has a number of new BEVs coming to market, including the big EQS sedan that is its first long-range entry into the U.S. Where the EQS serves as the electric alternative to the familiar S-Class, the EQXX can be thought of as the equivalent of Mercedes’ coupe-like CLS sedan.

Whether this concept car will go into production – as shown at CES — is uncertain. But bits and pieces of the underlying technology clearly will show up over the next few years, Mercedes officials confirmed.

That starts with a sleek new design that would be the most aerodynamically efficient ever, with a drag coefficient of just 0.17. The EQS currently claims to be the world’s most efficient production model with a Cd of 0.20.

“The aerodynamics of the Vision EQXX embody this fusion of tech and aesthetic for us as designers. In line with our philosophy of Sensual Purity,” said Gorden Wagener, Mercedes’ chief design officer. “We created spectacular proportions that combine beauty with efficiency. The resulting body flow delivers revolutionary aerodynamics. The fact that the end result is as beautiful as it is bears testament to the skill of our design team working in close collaboration with the aerodynamics experts.” 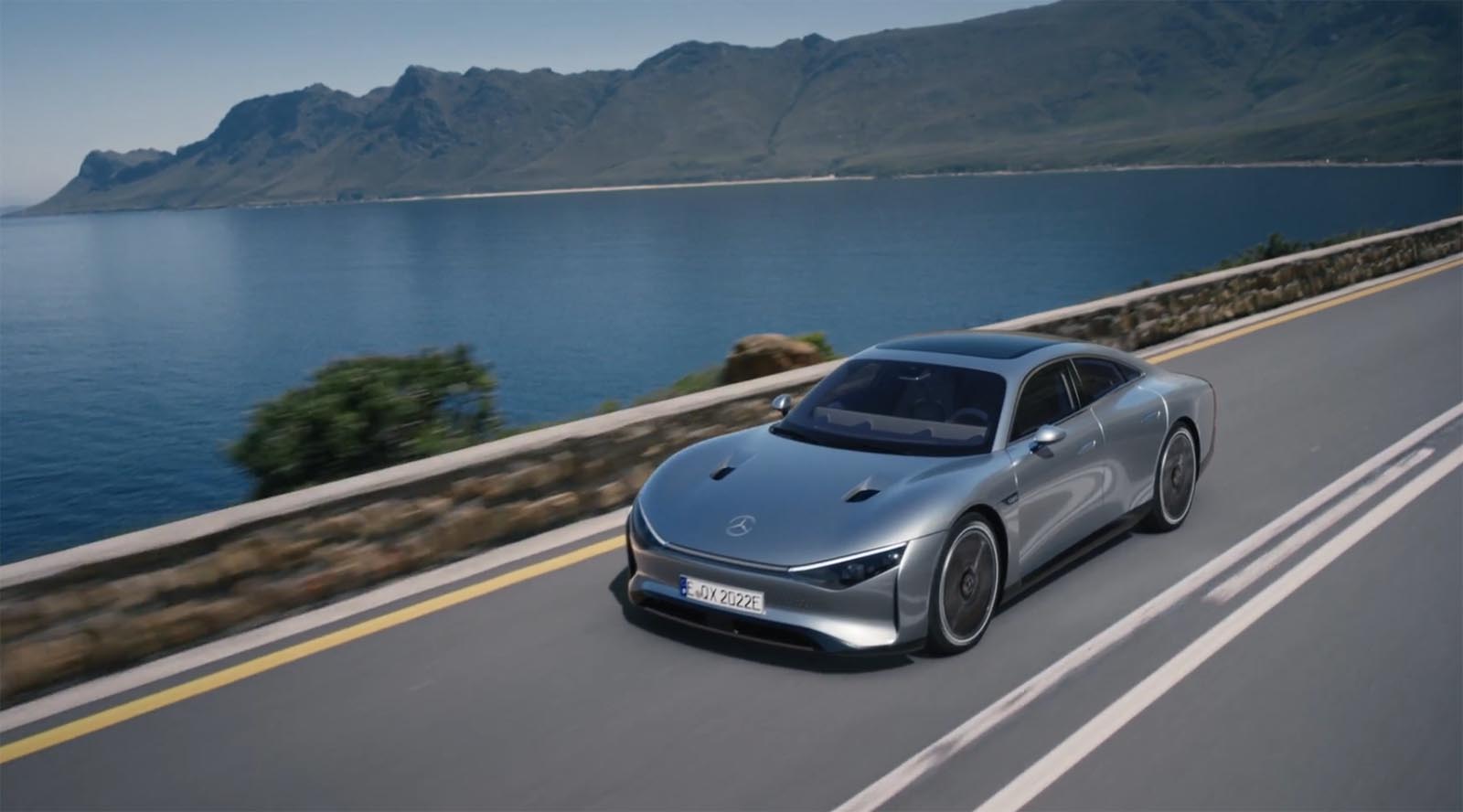 While the EQS has received generally positive reviews, the sedan’s range is clearly short of expectations, at a maximum 350 miles per charge, according to the EPA. The EQXX pushes into new territory at an estimated 1,000 kilometers, or about 625 miles, using a 100 kilowatt-hour battery pack.

That works out to about 6 miles per kWh, or 50% more than what the longest-range Tesla can manage, and 20% better than the new Lucid Air Dream Range edition, currently the industry’s efficiency leader. Measured another way, that works out to an equivalent of 235 miles per gallon of gas, claims Mercedes.

The windswept design is one part of the formula, but it doesn’t stop there, said, Mercedes’ R&D chief Markus Schafer, declaring that “Efficiency is the new currency.”

The EQXX uses more efficient silicon carbide chips, rather than the more common – and less expensive silicon chips found in most of today’s BEVs.

They develop a more efficient climate control system for the concept car’s battery pack, using less energy to keep its cells heated or cooled, depending upon weather conditions and driving behavior. 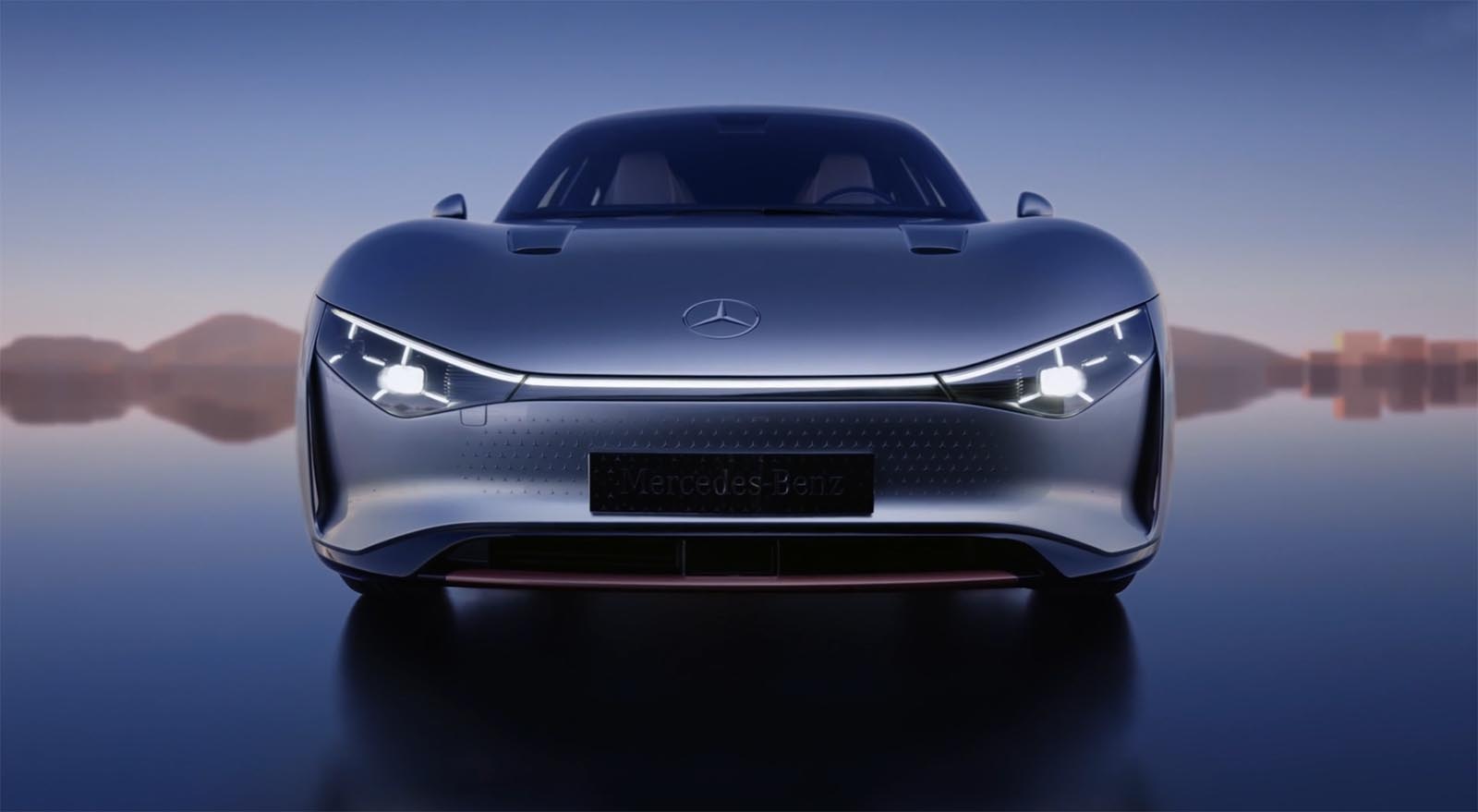 The batteries, meanwhile, are 50% smaller and 30% lighter than those found in the EQS, thanks to the use of silicon anodes and other enhancements greatly increasing energy density. All told, the final pack is small enough to fit into a compact car.

The lower mass means the Vision concept can run with less power. The single-motor EQS 450+ produces 329 hp, the EQXX about 204 hp. Since the show car uses the Mercedes-Benz Modular Architecture for compact and medium-sized cars, however, it could get a second motor for additional performance. 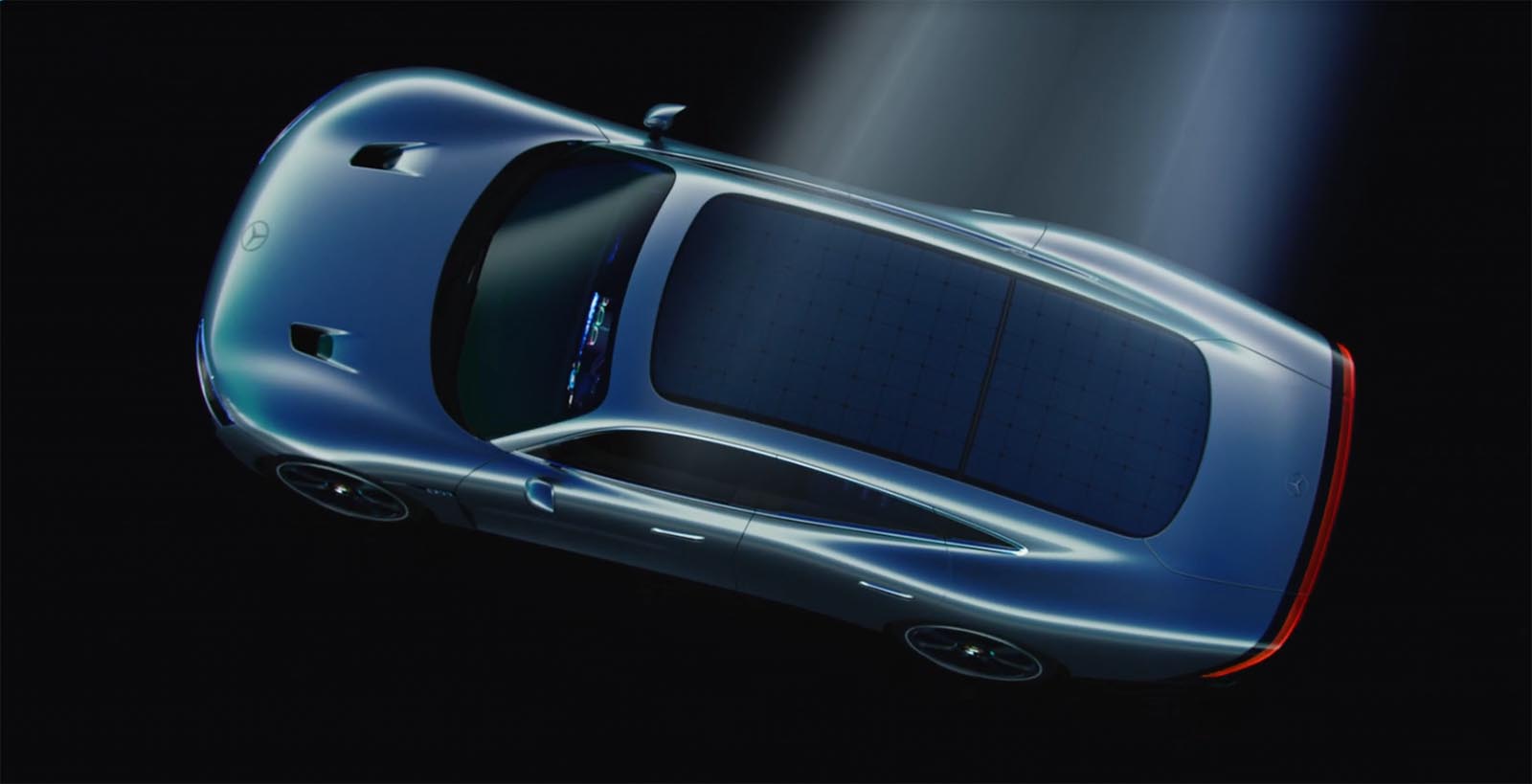 The EQXX also features a solar array built into the roof. It charges up a small lithium-iron-phosphate battery pack that powers up some of the sedan’s ancillary systems.

“One of the best ways to improve efficiency is to reduce losses,” said Eva Greiner, chief engineer of the electric drive system at Mercedes-Benz. “We worked on every part of the system to reduce energy consumption and losses through system design, material selection, lubrication and heat management. And our fantastic simulation tools helped us find out quickly what works and what doesn’t. ”

All told, about 95% of the energy contained in the batteries reaches the wheels, up from 75% with the EQS and barely 50% with the most efficient internal combustion engines. 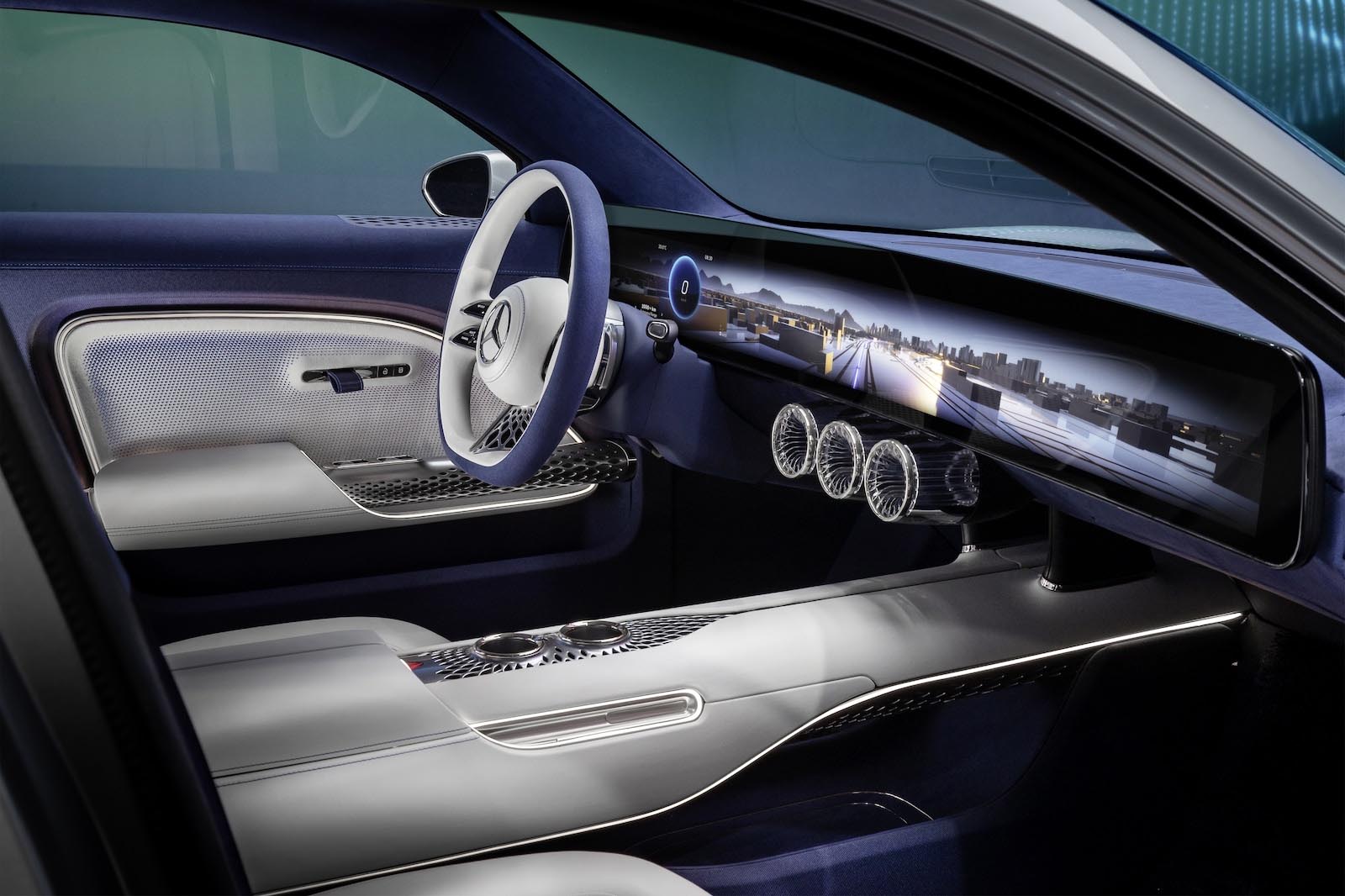 The goal for the EQXX was not only to enhance the sedan’s energy efficiency but also to make the BEV more sustainable. Everywhere possible, according to Mercedes, renewable and recyclable materials were used. In the cabin, that included mycelium, the root-like structure of mushrooms, “bio-engineered” into an artificial fabric that has “the look and feel of leather,” said design leader Joana Jarisch.

Ahead of the CES debut, Mercedes officials hinted that a version of the EQXX could see production. For now, they’re vague about plans, a statement from the company only noting that, “Many of its features and developments are already being integrated into production” with other models. 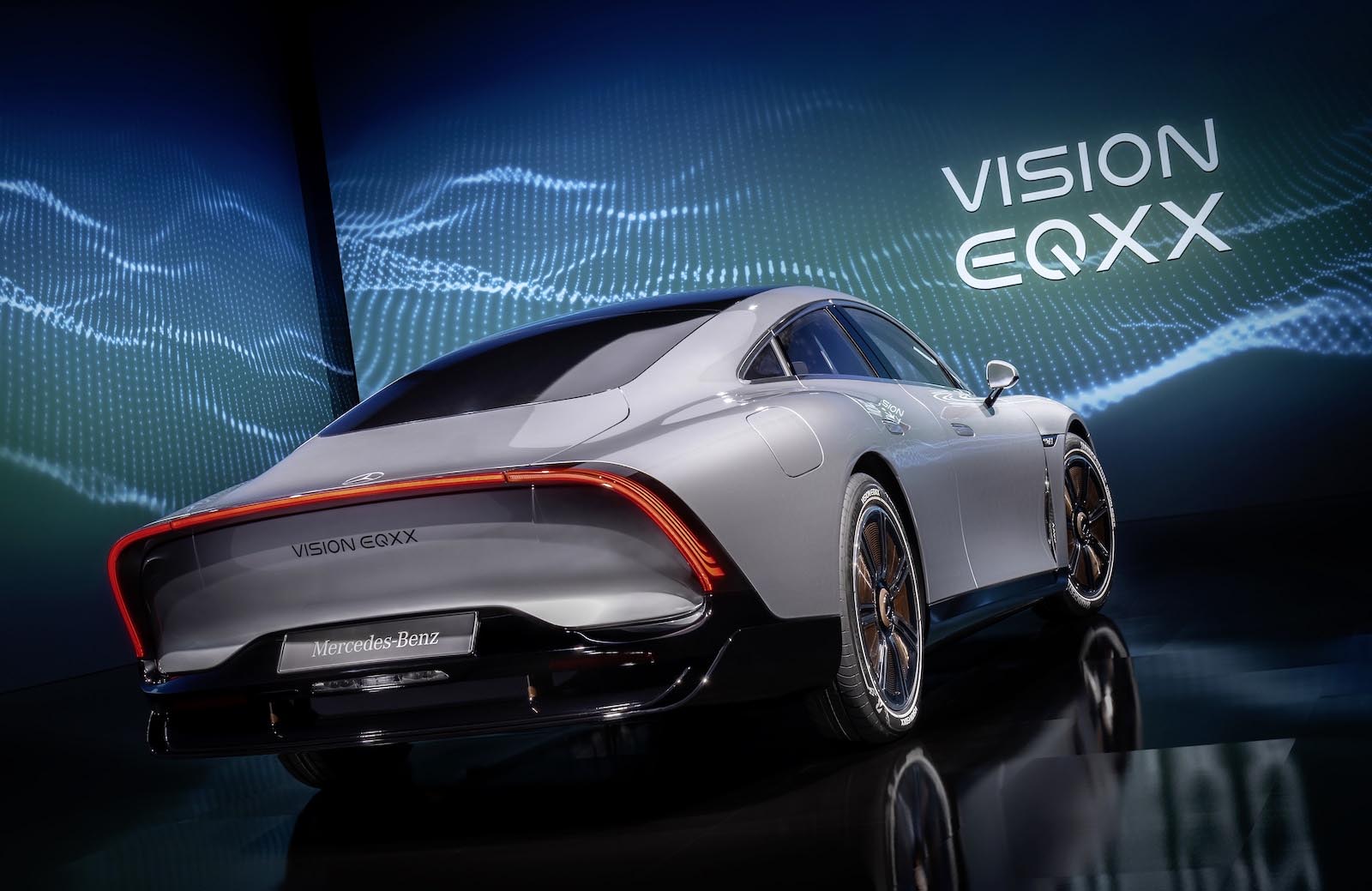