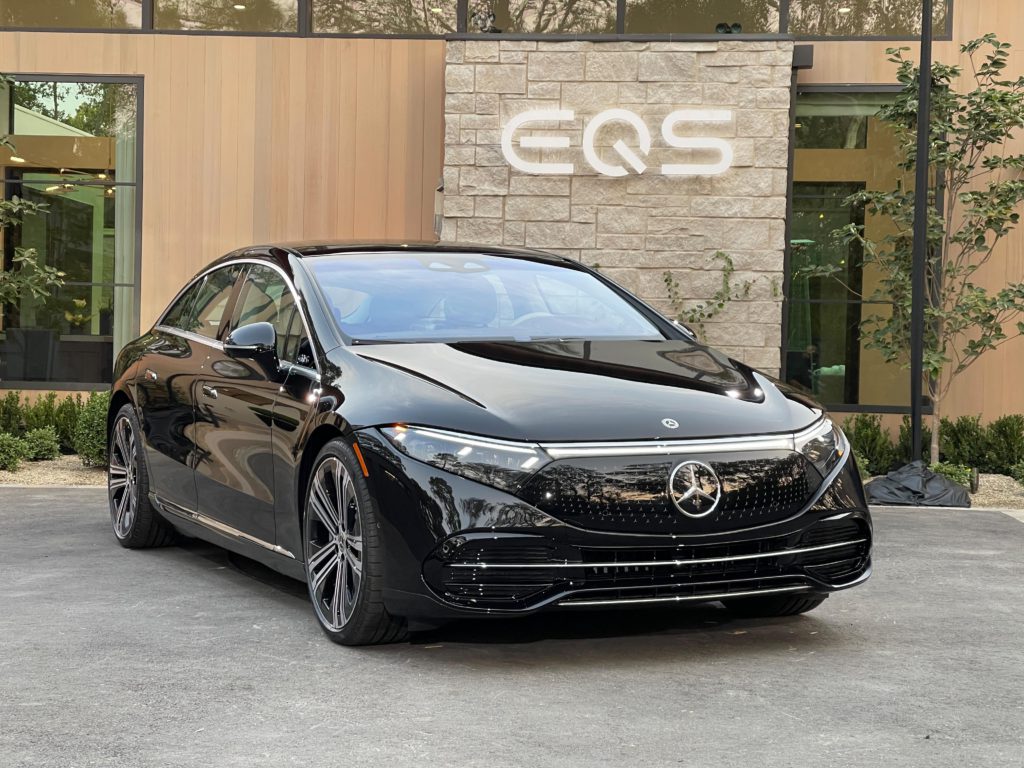 If the only thing that matters is 0-60 times, it’s going to be hard for anyone to challenge the Tesla Model S Plaid. But raw acceleration does not a luxury car make. And so, with the launch of the 2022 Mercedes-Benz EQS 580 4Matic, the California upstart’s flagship sedan is facing its first truly direct competitor.

It may not be quite as fast off the line, but it offers all the classic luxury features the Teutonic brand is known for, plus some cutting-edge technologies, as well as a still-quick electric powertrain. 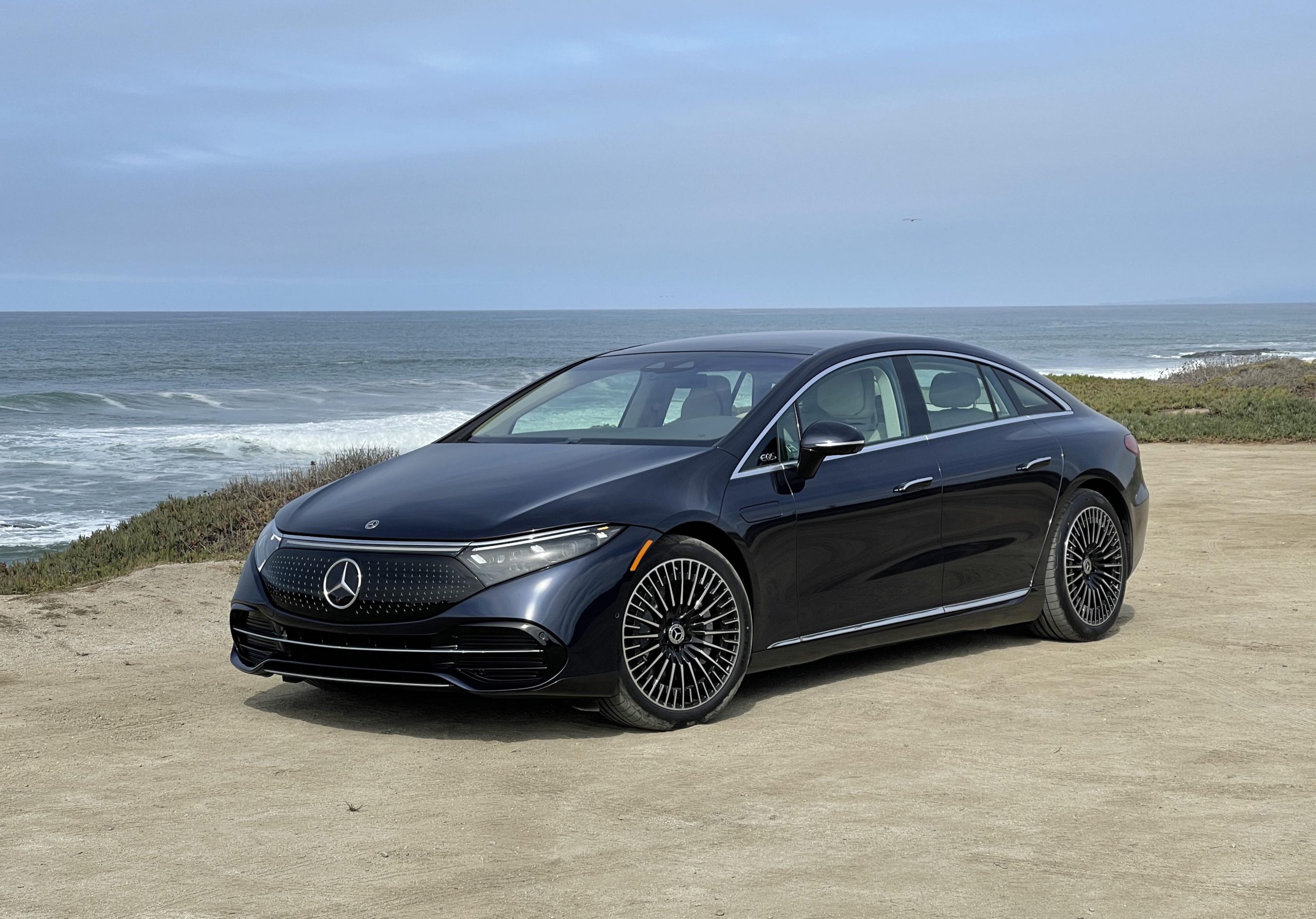 For Mercedes, the launch of the EQS offers a critical opportunity to seek some revenge. Long the benchmark in the premium luxury segment, the brand has watched a steady procession of traditional S-Class buyers defect to Tesla. The EQS provides a chance to win them back — while serving as the halo for its own planned shift to battery power.

With its distinctive, if controversial new design language, Mercedes launches with two versions of its new battery sedan. There’s the “base” EQ 450+ with its single, rear-mounted motor. The 2022 Mercedes-Benz EQS 580 4Matic, as the name suggests, uses twin motors to not only boost performance but also add all-wheel-drive.

Mercedes later will introduce a truly high-performance AMG version, as well as an even more luxurious EQS Maybach — both teased during the recent Munich Motor Show. And to confuse matters even further, an EQS SUV is also set to reach the market next year. 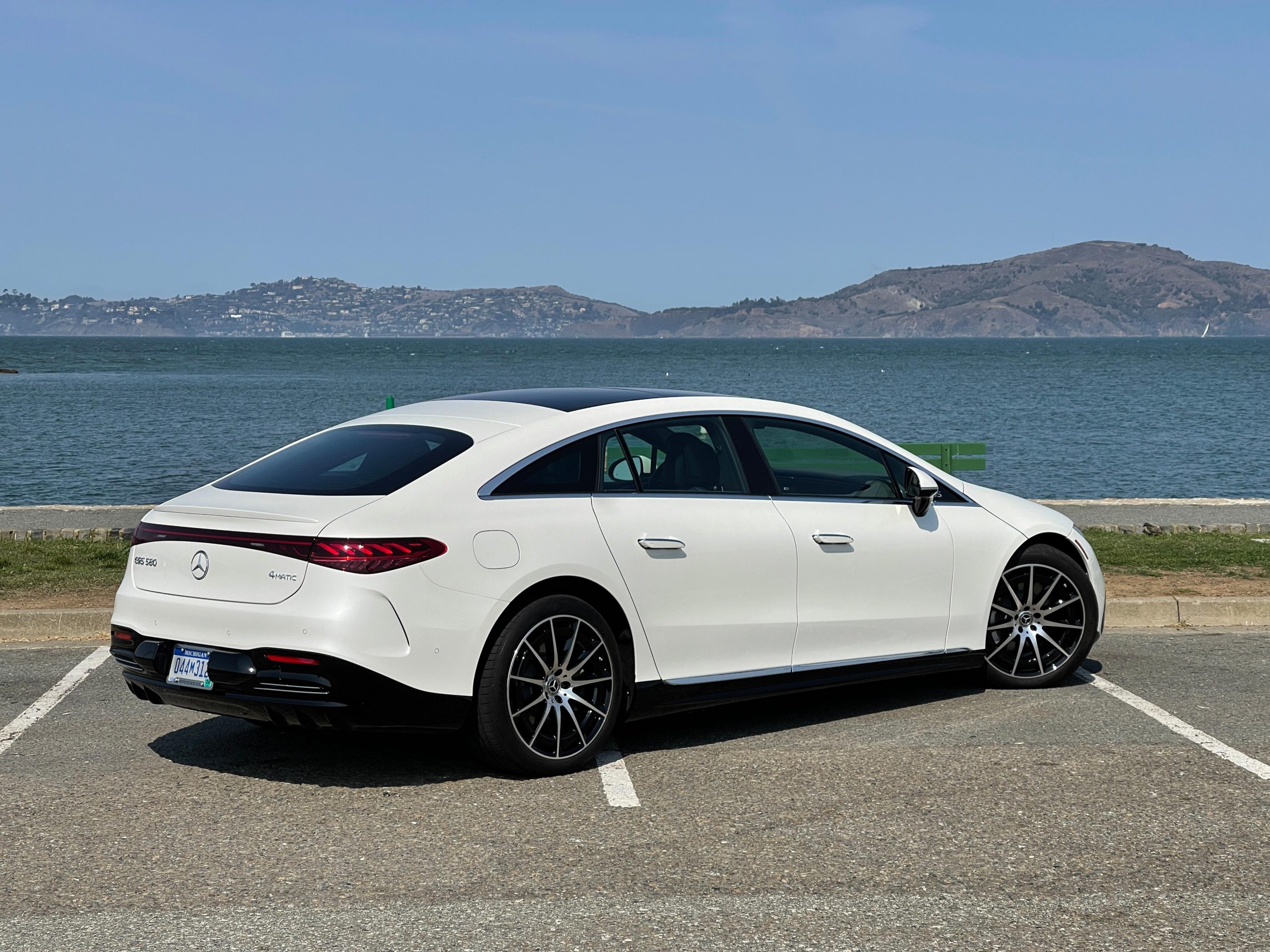 While it’s meant to serve as an all-electric alternative, the 2022 Mercedes-Benz EQS 580 4Matic isn’t just an S-Class with its big gas engine swapped out for an electric drivetrain — the questionable approach taken by Genesis with its new electrified G70.

This BEV rides on Mercedes’ all-new EVA platform. Similar to the underpinnings found on the Tesla Model S, this is a skateboard-like “architecture” that places both motors and batteries below the load floor. That layout freed up the product development team to take some bold steps in terms of design and engineering. 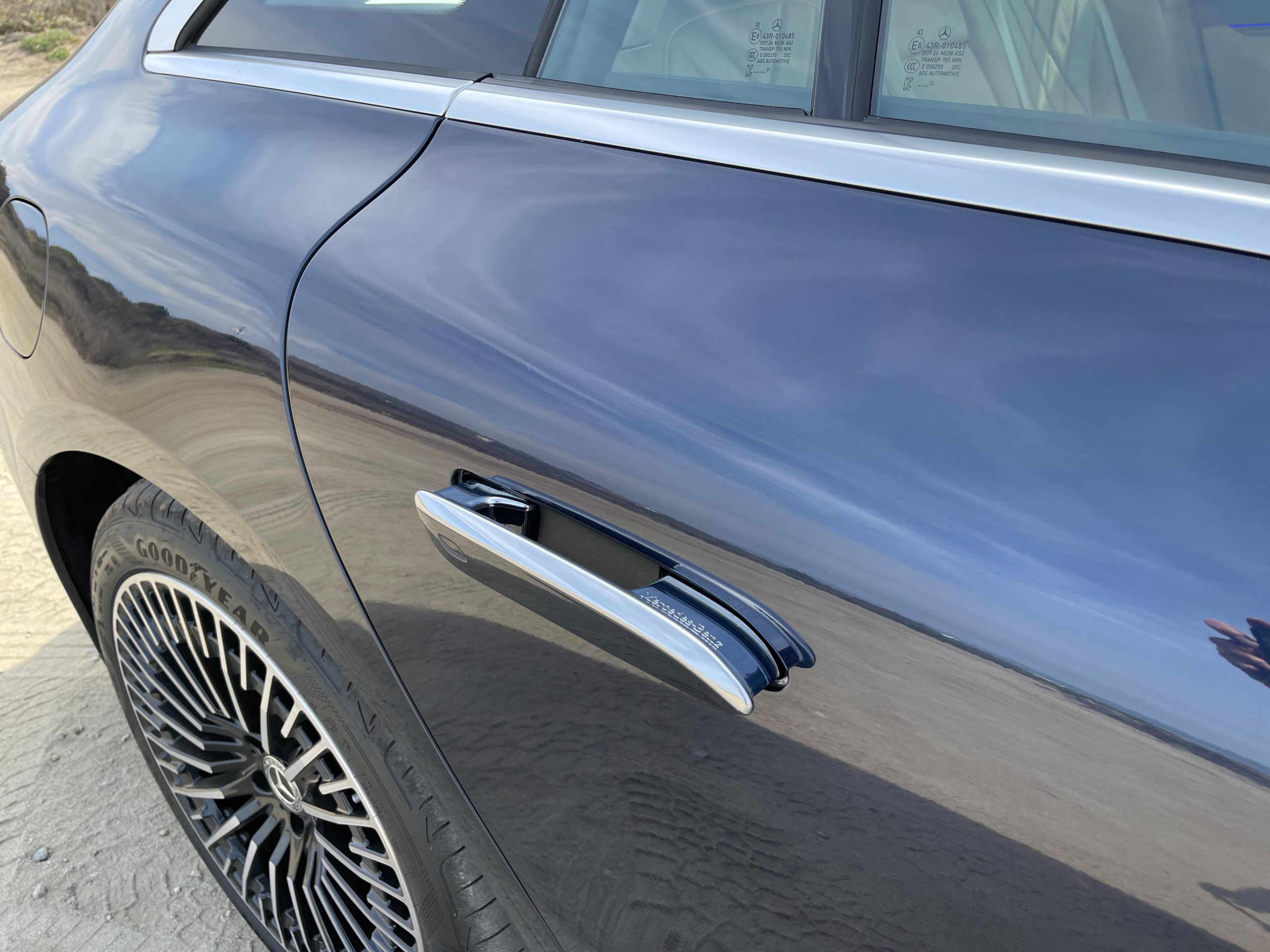 That starts with a radically different design language Mercedes calls “one-bow.” With only subtle deviation, a single, curved line flows over the top of the vehicle from bumper to bumper. With no engine up front, the nose is substantially shorter, and the traditional grille is replaced by a solid panel etched with dozens of small, backlit Mercedes tri-stars. Though there’s no engine compartment, there are intakes below the bumper to feed cooling air to the powertrain.

The one-bow design is polarizing, and while my 2022 Mercedes-Benz EQS 580 4Matic tester earned plenty of thumbs up during my two days driving through Silicon Valley and along the Santa Cruz coast, it also generated some “WTF?” comments. But the shape has a significant, practical purpose.

The EQS boasts a drag coefficient of 0.20, the lowest number of any automobile now in production. That translates into better range, improved performance, and a notable reduction in wind noise. 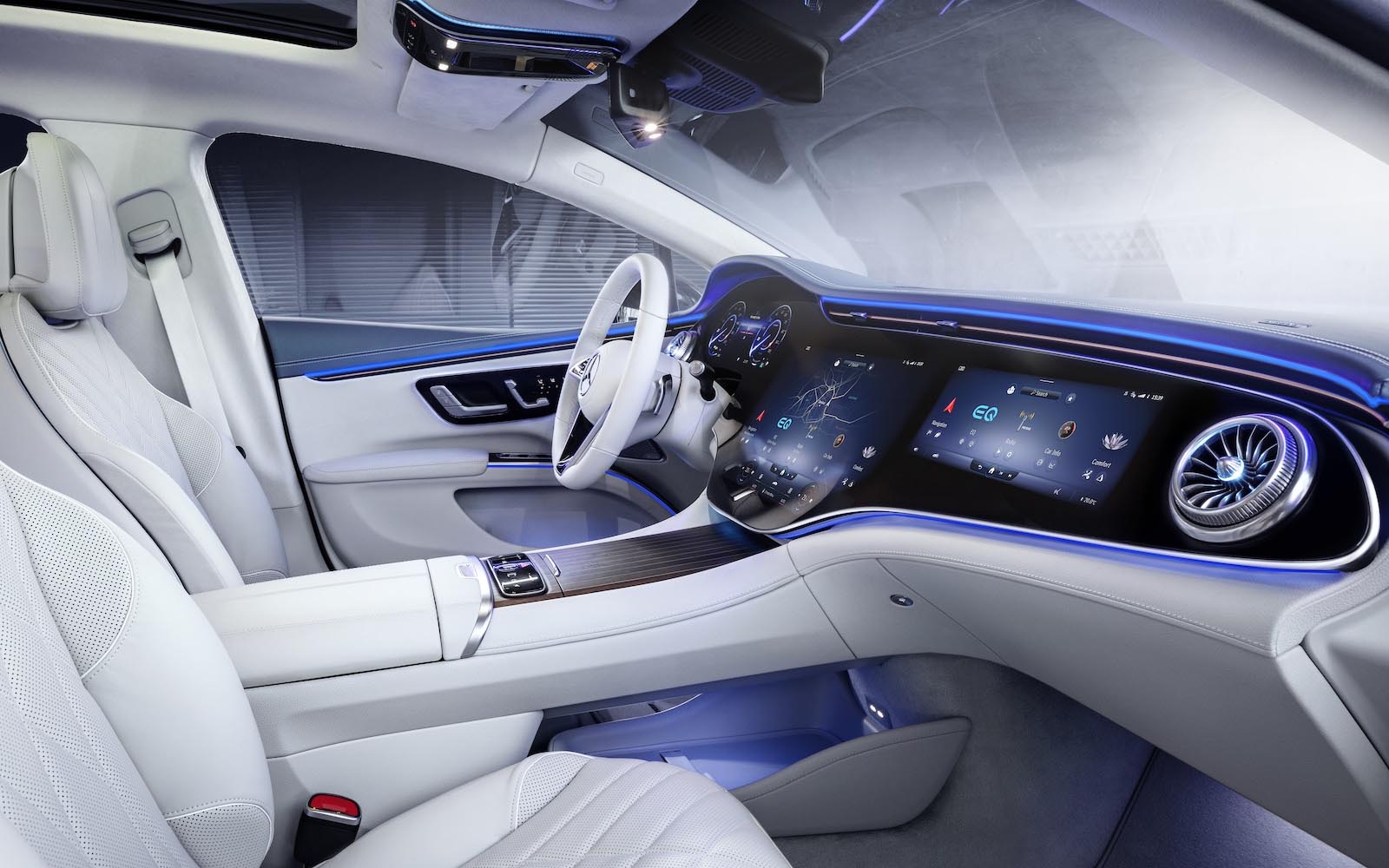 In fact, the new Mercedes sedan is nearly graveyard quiet while running at freeway speeds unless you opt for one of three digital “soundscapes” designed to replace the sound of a conventional powertrain.

One of the benefits of going electric is supposed to be freeing up space normally devoted to the engine compartment for the cabin. However, the aggressive curve of the one-bow roofline limits this, unfortunately, and the rear seat is pulled a little more forward than in a conventional S-Class in order to maintain comfortable headroom. But the trunk is positively cavernous.

And the overall feel of the cabin is as luscious and lavish as you’d expect of a flagship sedan. The diamond-stitched seats in the S580 I drove were plush and comfortable, even after two long days on the road. And they’re supportive enough to keep you in place when you mash the throttle and feel the sedan’s instant torque. With no driveshaft tunnel, meanwhile, Mercedes designers found space to play with, coming up with a floating, two-level center console providing plenty of additional storage. 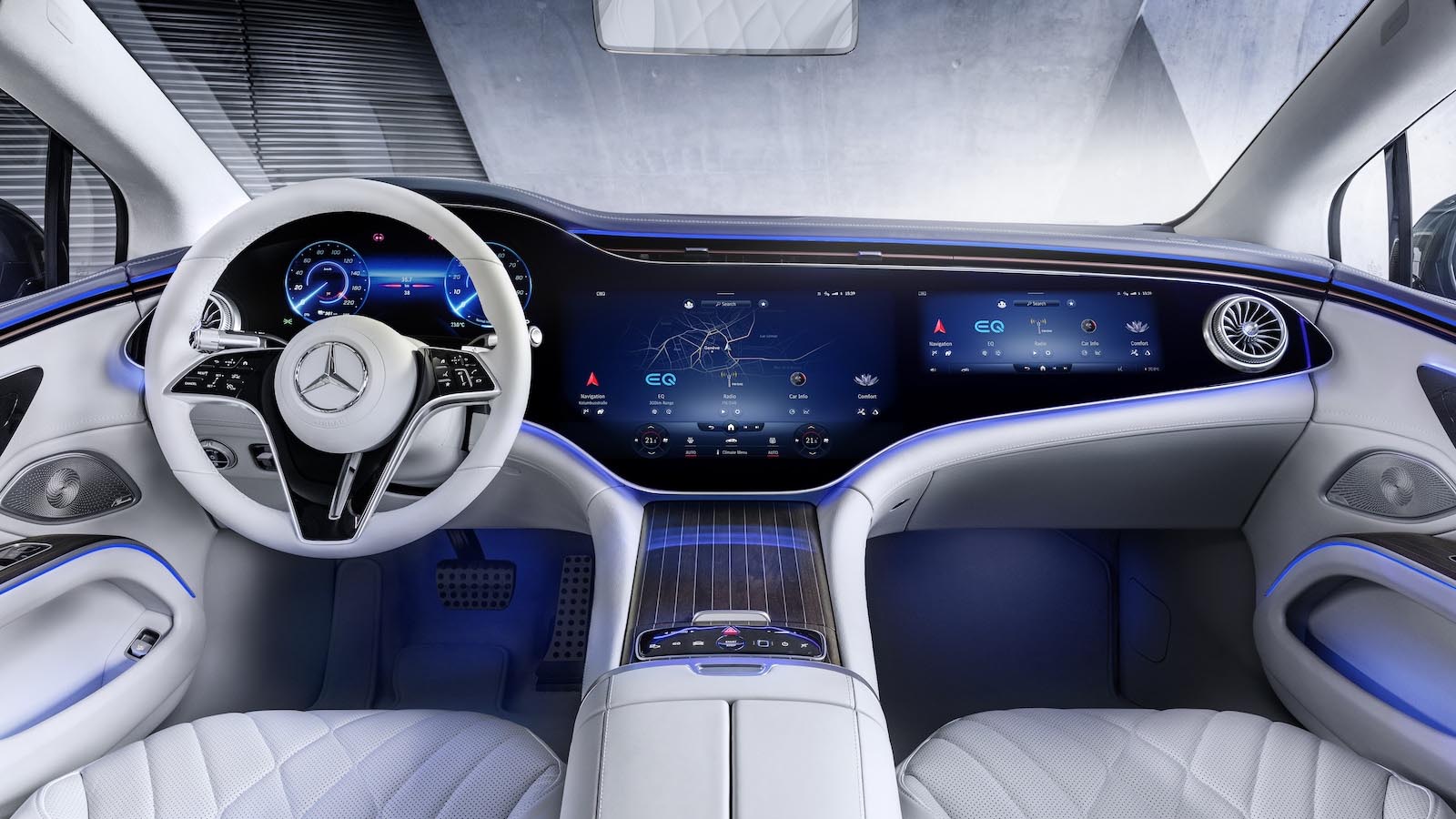 What dominates the passenger compartment of the 2022 Mercedes-Benz EQS 580 4Matic, however, is the new Mercedes Hyperscreen which stretches 56 inches, pillar-to-pillar. There’s no escaping it, short of closing your eyes, even if you’re riding in the front passenger seat.

There actually are three separate displays tucked in under the glass panel, starting with a 12.3-inch gauge cluster. The infotainment display measures a full 17.7 inches. The front passenger gets a smaller touchscreen above the glovebox. It can be used to watch videos or duplicate much of what comes up on the center screen, including a navigation map to follow along.

The EQS comes to market with the latest version of the MBUX operating system. Say, “Hey, Mercedes,” and it’ll recognize plain English commands to set navigation, change radio stations, even close the optional power doors. It’s not quite up to Amazon Alexa standards, but it’s improved from the original version. Introduced on the Mercedes A-Class, the older version could get frustratingly hung up when it didn’t recognize a command.

The good news is that the system can handle smartphone-style over-the-air updates. One already is scheduled to fix a problem with the layout of the infotainment screen. Some navigation information will be relocated because it’s currently blocked from view when your hands are on the steering wheel.

For those who want even more digital displays, you can outfit your EQS with a large heads-up display that provides a virtual reality, or VR, projection of arrows, seemingly floating off in the distance, to help point out your path when using onboard navigation. 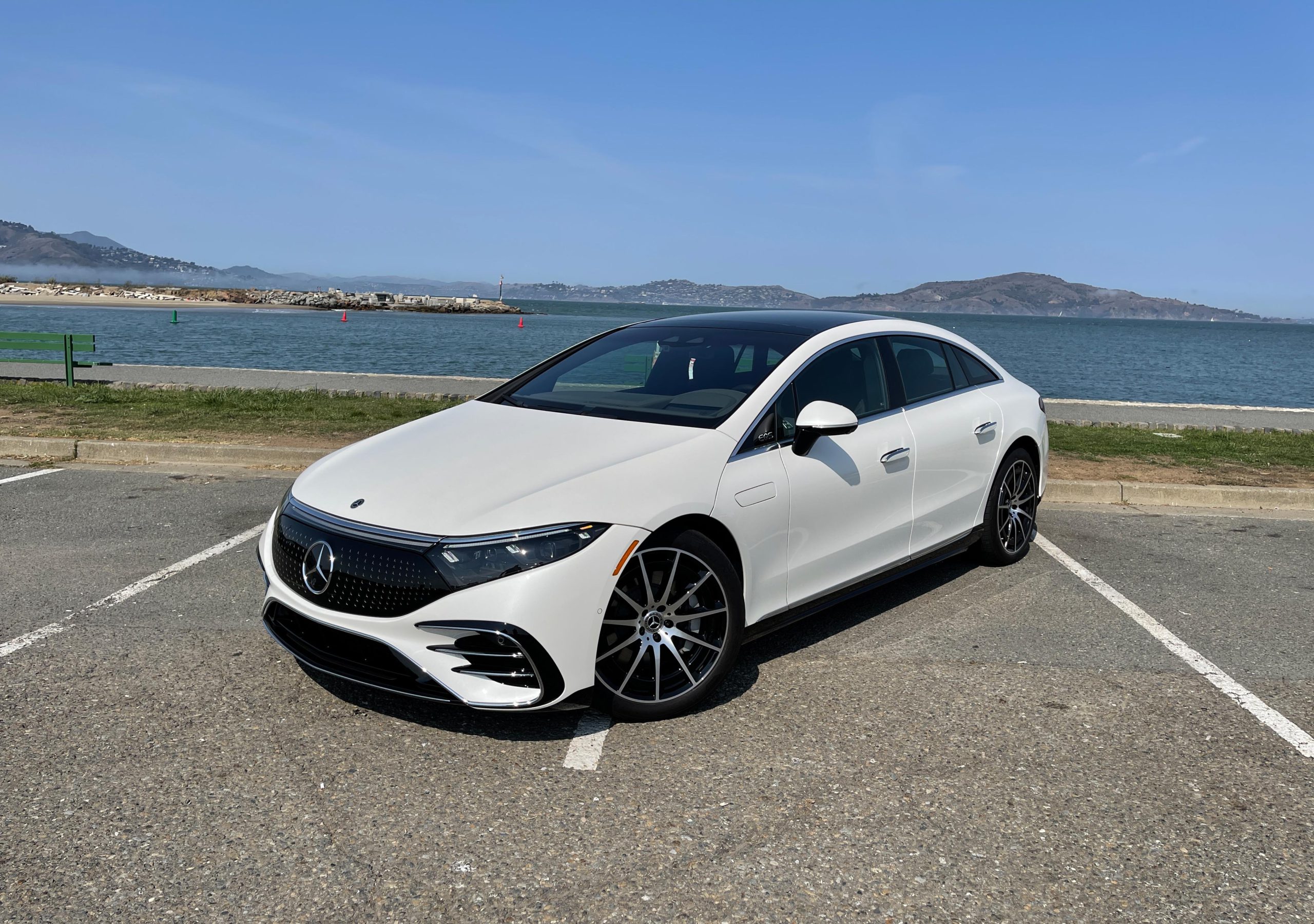 Anyone who has driven the 2022 Mercedes-Benz S-Class will feel an immediate familiarity as they start driving the new EQS. It’s got that classic plush feel, almost like floating down the road. The 2022 Mercedes-Benz EQS 580 4Matic I spent my time in soaked up the bumps with its adaptive air suspension.

Switch to Sport Mode, and the sedan hunkers down a bit, but still offers a comfortably compliant ride when just cruising. It tightens down automatically when you start driving more aggressively, as I did along part of the winding coast road north of Santa Cruz.

That might come as a surprise considering the added mass from the 108 kilowatt-hour lithium-ion battery pack that keeps the sedan’s heart beating. But because it’s mounted below the load floor, the BEV actually has a lower center of gravity than the S-Class, and a near-perfect front-to-rear weight ratio.

The brakes raised my only real complaint with the EQS. Like all BEVs, the Mercedes sedan uses regenerative brakes to recapture as much energy as possible that would otherwise be lost when slowing. It’s then sent back to the battery pack to extend range. The EQS development team sought to maximize “regen mode,” and that means the initial feel of the brakes is somewhat squishy, especially compared to the S-Class.

More disconcerting, the brakes will, under certain conditions, begin to engage even before your foot reaches the pedal – and that pedal will begin depressing entirely on its own. It clearly will take more time than I had behind the wheel to get comfortable with that strategy.

On the plus side, you get 10 degrees of rear-wheel steering on both EQS models. The direction they turn depends upon how fast you’re driving. On the open road that helps whip you through corners. Around town, it lets the big BEV maneuver and park like a much smaller vehicle. 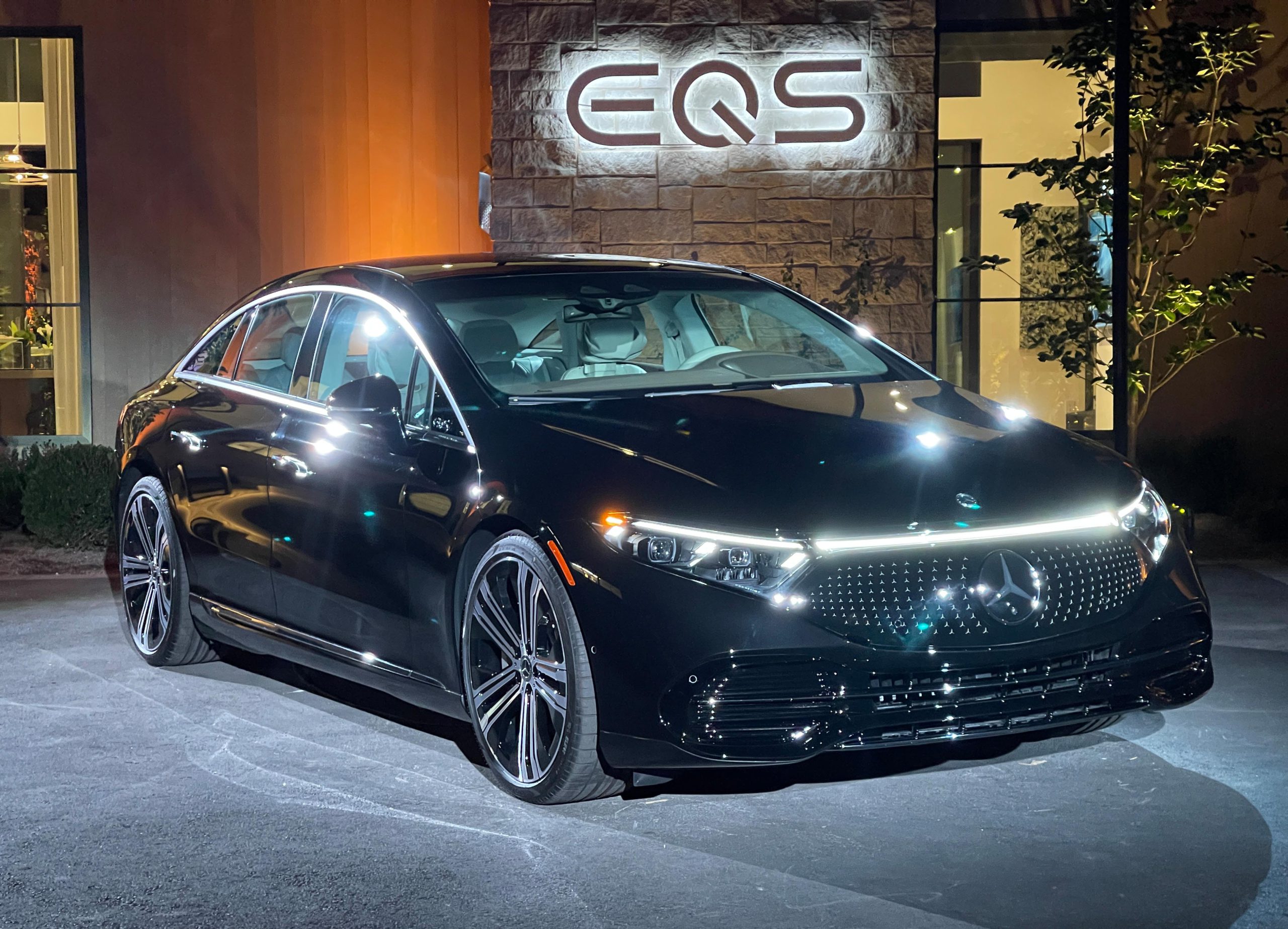 Meanwhile, whether you’re launching off a stoplight or making a quick pass, there’s nothing quite like the feel of the EQS 580’s electric motors spinning up. With a single-speed gearbox, it’s pure, uninterrupted acceleration.

Stepping up, I spent my time driving through Silicon Valley and the surrounding countryside in the new Mercedes-Benz EQS 580 4Matic. It adds a second motor on the front axle and bumps combined power up to a peak 516 hp and 611 lb.-ft. That’s enough to launch the BEV from 0-60 in 4.1 seconds, about 1.8 seconds quicker than with the 450+. Top speed is electronically limited to 130 mph.

While the 2022 Mercedes-Benz EQS 580 4Matic might be left in the dust when dragging a Tesla Model S Plaid, that shouldn’t be a deal-breaker for many folks. And the gap is expected to narrow substantially once the AMG version launches. There’ll also be an even more luxurious EQS Maybach edition. 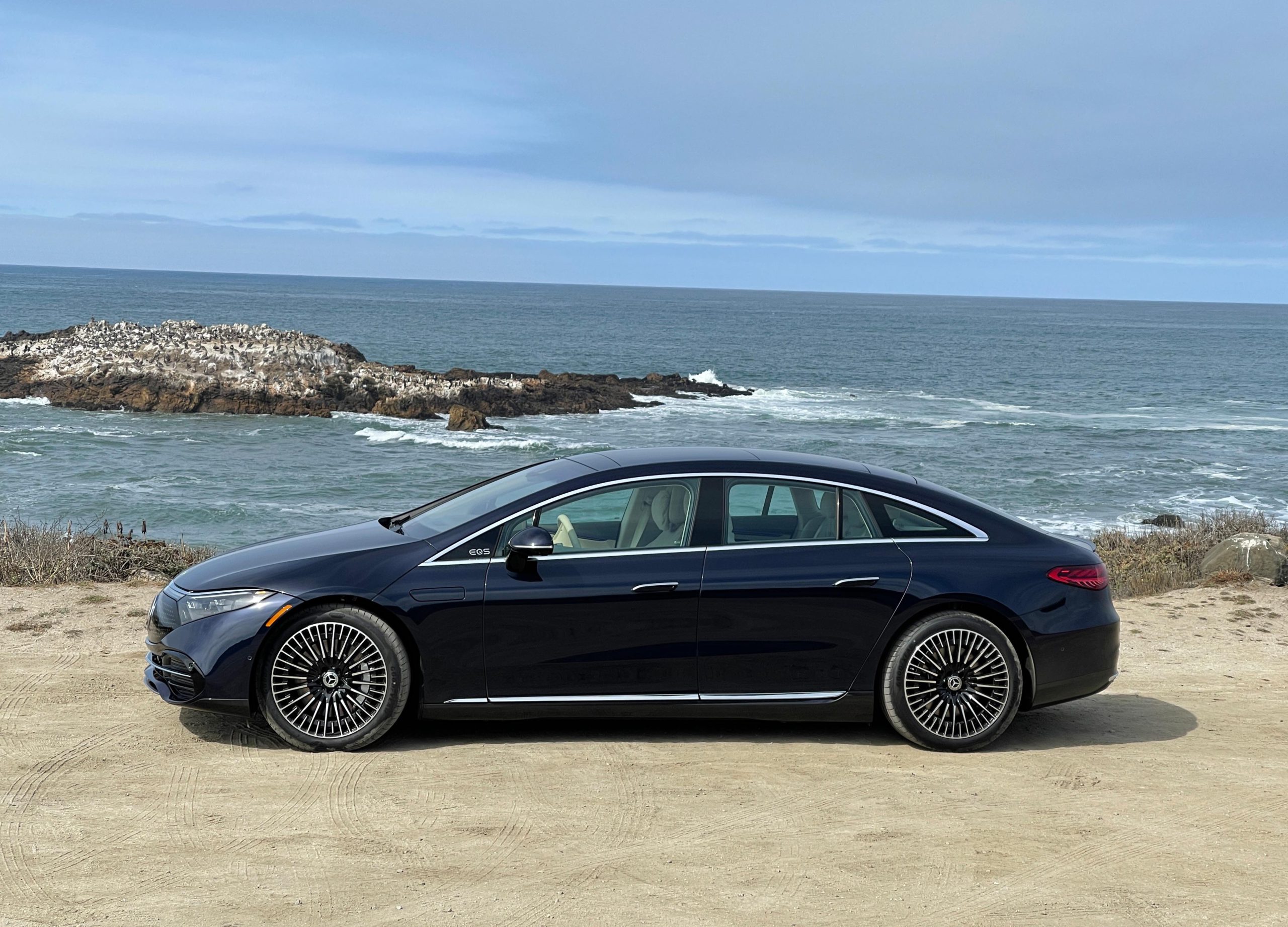 The 108-kilowatt-hour lithium-ion battery pack will deliver an EPA-estimated range of 350 miles with the EQS 450+. Despite the added motor and significant boost in power, range drops just 10 miles, to 340 per charge, with the EQS 580. Surprisingly, the 580 lost much less range than I expected despite my unquestionably aggressive driving style.

The battery pack can go from a 10% state-of-charge to 80% in 31 minutes using one of the newer 400V DC public quick-chargers. Using a 240-volt Level 2 charger, a motorist can go from drained to fully charged in a bit over 11 hours. 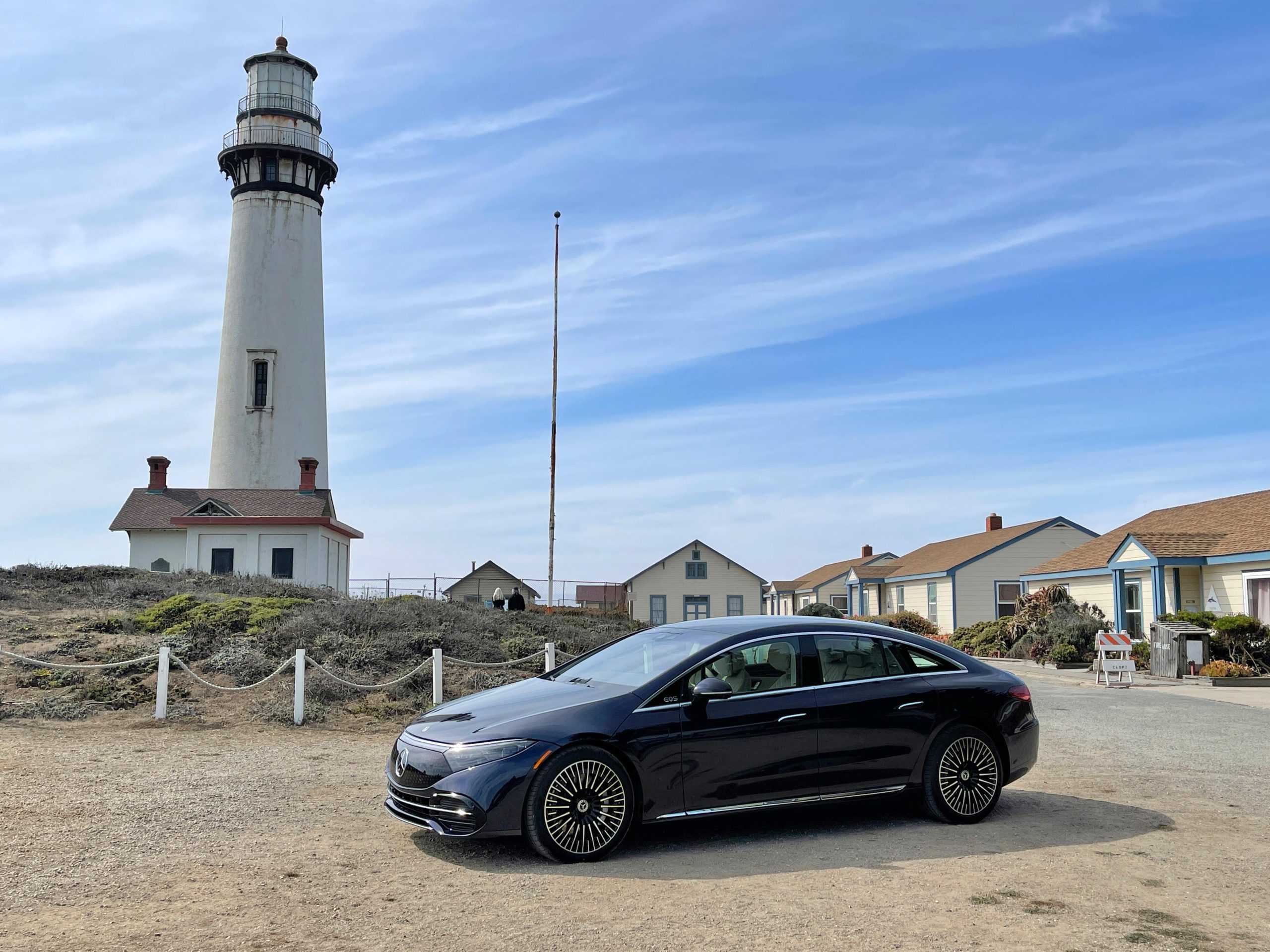 While still in Silicon Valley I had the chance to join a virtual chat with Mercedes CEO Ola Kallenius. He emphasized his belief that it’s only a matter of time until EVs take over. While slow out of the box, the German automaker now intends to lead, rather than follow. Perhaps, but it will have to win hearts and minds in a current market where “Tesla” and “EV” are nearly interchangeable.

The new EQS line, as Mercedes’ first all-electric model, will be a critical entry, one intended to prove what the vaunted tri-star brand is capable of. Though the big battery car does have some faults, it’s a notable start and one that green-minded buyers looking for a premium luxury sedan should clearly consider.