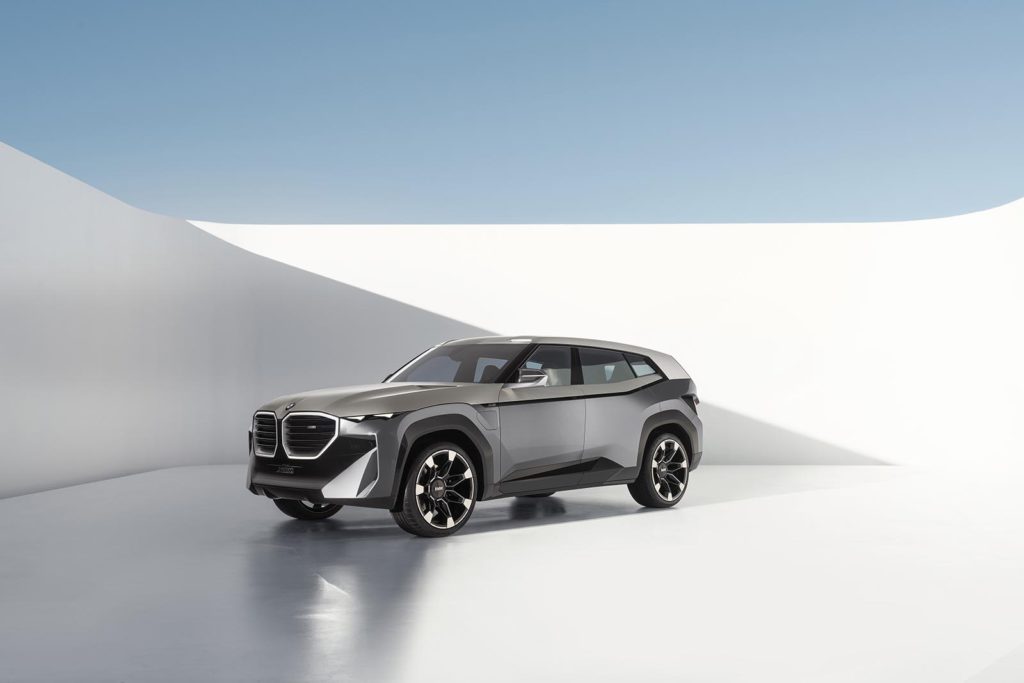 Over the decades, BMW has turned to artists like Andy Warhol, Alexander Calder, and Frank Stella to transform various production models into a series of “Art Cars.” While you won’t find any famous signatures on the BMW Concept XM making its debut at Art Basel in Miami Beach today, the SUV prototype is a work of art in its own right.

But once it gets out on the street or track, you’ll have to look quickly to check it out. The Concept XM will return in production form late next year and will become the most powerful model ever to wear an M badge.

The XM clearly doesn’t fit the performance brand’s traditional mold. It will be bigger than anything the Bavarian automaker currently offers and feature a lounge-like interior meant to make it a luxurious cruiser when it’s not out on the track.

“The BMW Concept XM represents a complete re-imagining of the high-performance vehicle segment,” according to Frank van Meel, the CEO of BMW M GmbH. “It underlines the ability of BMW M GmbH to break with established conventions and push boundaries in order to offer fans of the brand the ultimate driving experience.” 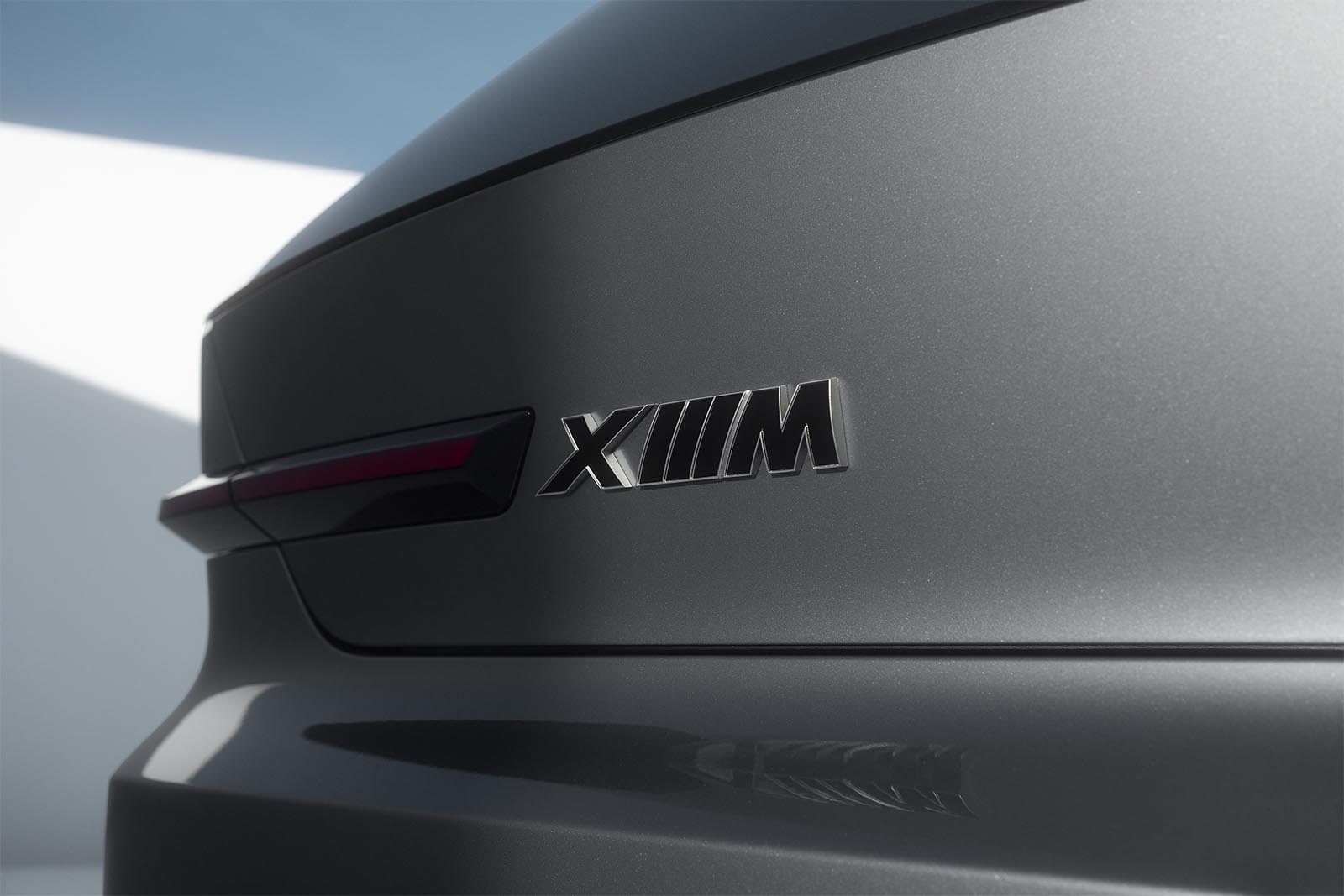 Perhaps the biggest surprise is the fact that the XM is the first M to use an electrified drivetrain. Its racing-derived plug-in hybrid system will punch out 750 hp and 737 lb.-ft. of instantaneous torque. But, drawing from a 20-kilowatt-hour lithium-ion pack, it will provide up to 30 miles of all-electric range based on the European WLTP test cycle, (and likely around 25 miles once the EPA gets through with its own tests).

“The series-production vehicle – the first pure BMW M model since the legendary BMW M1 – also shows how we are approaching the step-by-step electrification of our brand,” said van Meel, ahead of the Concept XM’s debut in Miami Beach. 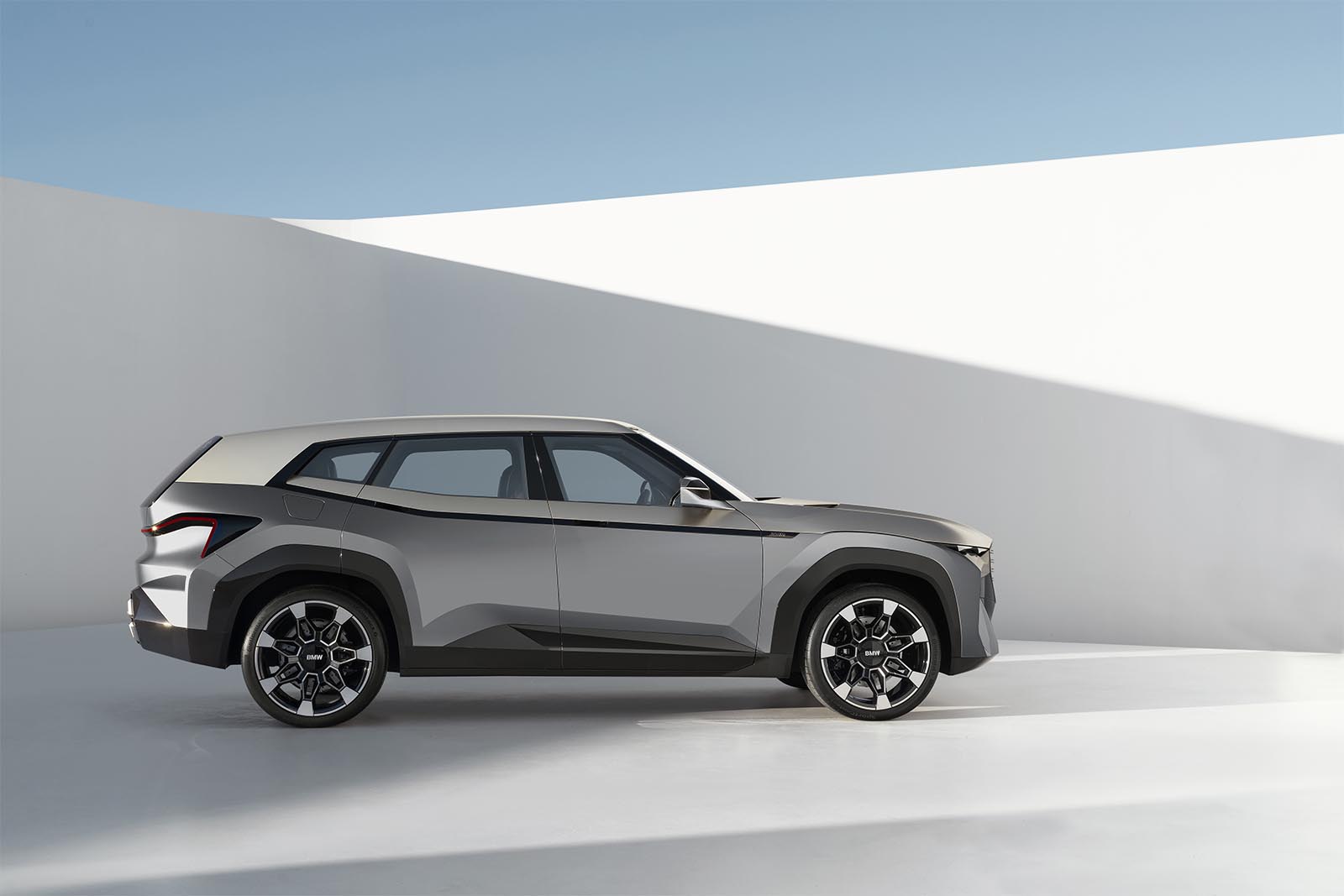 The show car has a commanding – make that menacing – presence, with an aggressively sculpted front end that should encourage other drivers to get out of its way. BMW isn’t releasing many details, but during a media backgrounder ahead of the Los Angeles Auto Show, he hinted that the XM will be bigger than anything the Bavarian marque currently has on the road. That would mean bigger than the 172-inch-long X8. And, the 23-inch tires on the Concept XM add to its arresting appearance.

Split module LED headlamps are all but concealed by a hood that wraps into the prototype’s front end. Oversized double-kidney grilles, each surrounded by a double frame, flow into the SUV’s corners. An aggressive lower spoiler and sharply creased air intakes seem poised to sweep up anything that gets in the XM’s way. 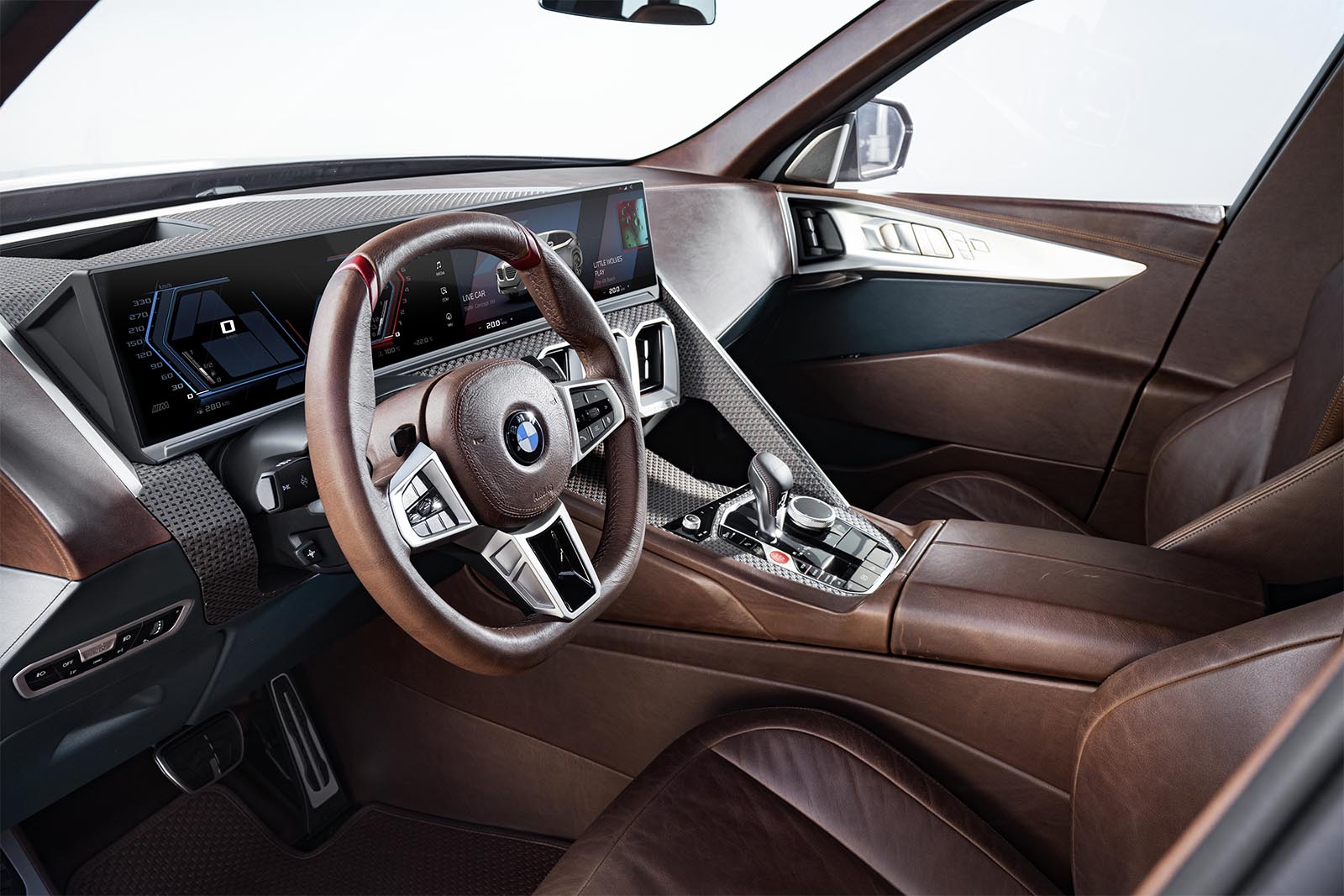 From the side, a floating roofline gives the Concept XM a sense of perpetually being in motion – even while parked inside a cramped room where reporters got a first glimpse of it in LA. The crisply creased side panels are divided into two distinct sections by a “black belt” – with the upper portion finished in matte gold-bronze,  the lower getting a coat of Space Grey Metallic paint.

If possible, the rear end is even more over-the-top, with the central portion of the roof descending several inches into the back glass. The taillights wrap into the rear quarter panels. And Dual-branch, twin-tailpipes complete the look.

The interior is, itself, divided up, almost in thirds. The driver gets a curving glass display that melds the XM’s digital instrument cluster and widescreen infotainment display. A thickly padded M steering wheel is finished in a baseball glove-style dark cordovan leather, while the instrument panel is accented by carbon fiber detailing with interwoven copper threads.

A grab bar, rising at a 45-degree angle out of the center console separates the cockpit from the front passenger. Those in the back, meanwhile, spend time in their own “lounge.”

It features what is likely the most over-the-top design BMW has ever come up with. The broad bench seat is covered with complimentary fabric and leather, both finished in a vibrant aquamarine. A deep pile carpet and a thick headliner add to the cocoon-like feeling.

It all stands in sharp contrast to the M1, until now the only model ever built specifically for BMW’s M brand. But that should be no surprise considering current trends. Even the performance world is shifting from sedans and coupes to SUVs and CUVs. And, depending upon whom you believe, the internal combustion engine may not have a long future ahead of it.

Van Meel and other M executives declined to discuss the XM’s hardware in much detail, but he noted that the basic drivetrain borrows heavily from M’s increasingly electrified motorsports program. Hybrids are quickly becoming the norm, rather than the exception, in racing series as diverse as Formula 1 and NASCAR. 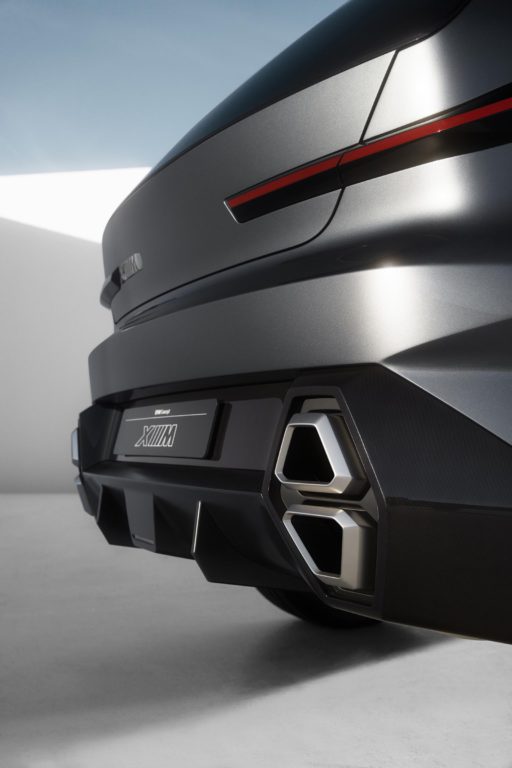 For the moment, the CEO said, hybrids make the most sense when it comes to a vehicle designed to put in serious track time. Going all-electric would present “completely different challenges,” starting with finding a way to turn in more than a couple laps before having to recharge.

That said, battery power is the way of the future, and this, said van Meel, “is the next step and we’re now thinking about what an all-electric model would look like.”

Asked how close the Concept XM will be to the model set to roll into showrooms late next year, van Meel told AutoWise, “Not everything you see will be in the series production car, but it will look very much like this one.”

That’s a fairly cryptic response, but it would seem highly likely that the plug-in hybrid drivetrain is going to make the jump. The exterior design could be toned down a bit, but even the unusual roofline may carry over, as well, based on comments some M officials made following the L.A. background session. The interior is another matter entirely. There’s little doubt that the basic, cockpit-oriented layout will hold. The “lounge” may wind up more closely resembling a classic M model, especially if BMW gets pushback from potential customers following the Concept XM’s Miami Beach public debut.

Whatever the production model winds up looking like, expect the BMW XM to come in near, if not well above, the $200,000 mark, a BMW insider hinted. 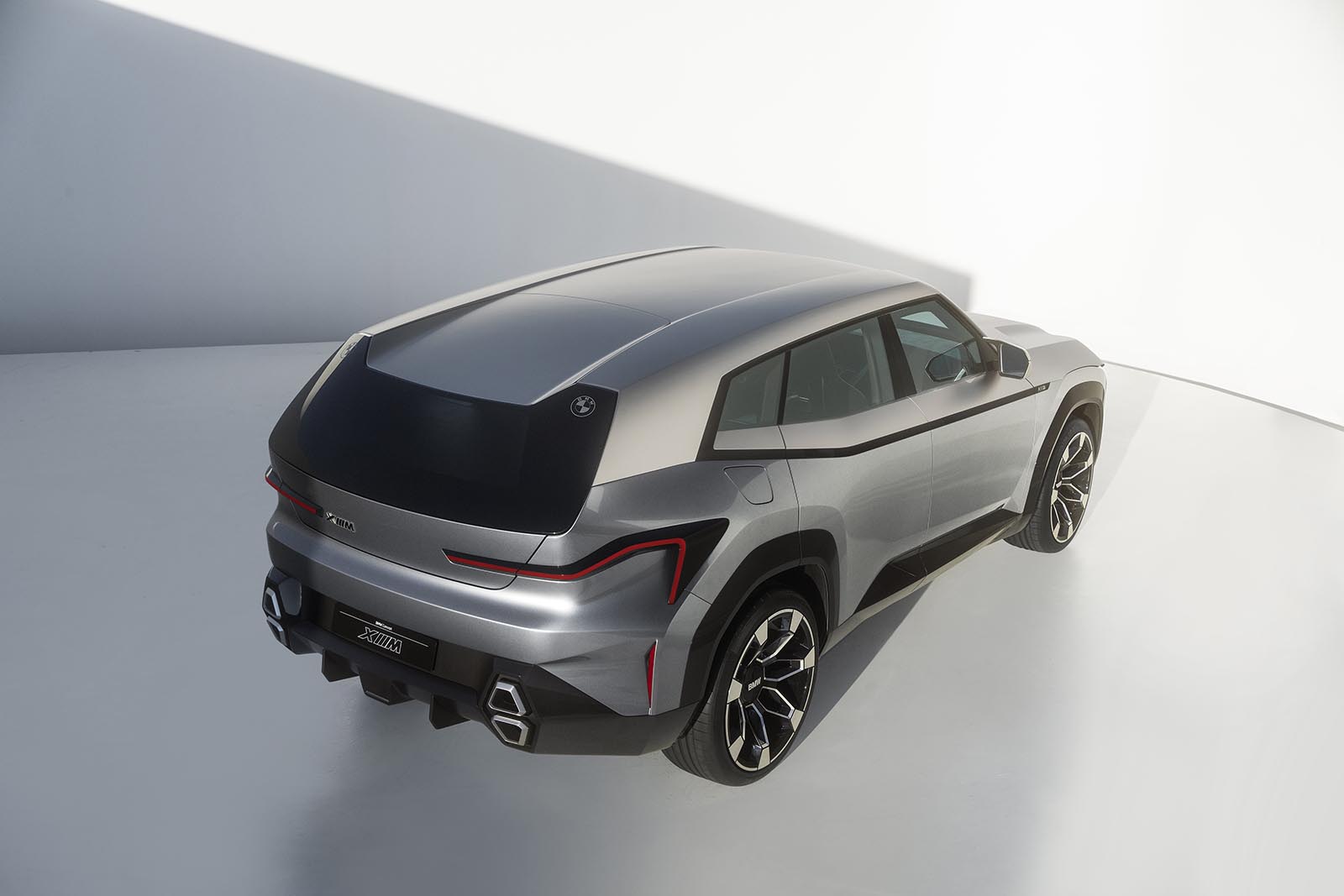 
The Jeep Grand Wagoneer is Back!
The Best Online Car Auctions for Buyers and Sellers
TruckHouse BCT: $300K Tacoma Overland Camper
2021 Toyota TRD Pro: Lunar Rock Is Out Of This World!
The Best From Buick in 2021
Hot Wheels Coming to the Big Screen With New Live-Action Mov...