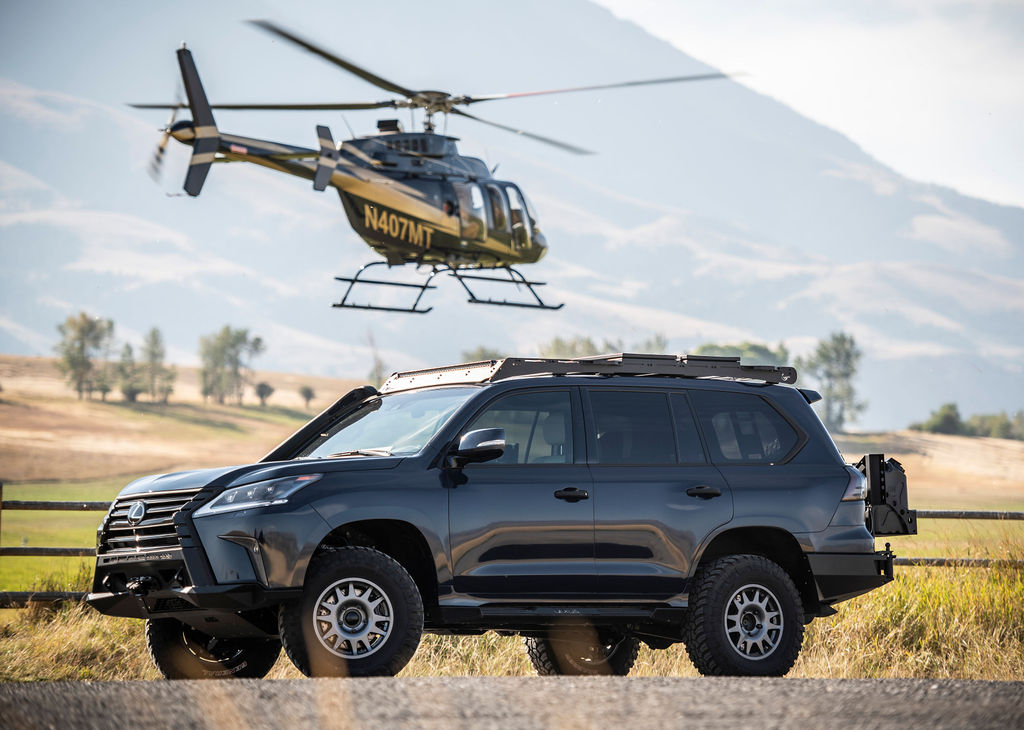 Lexus has done it again! The latest Lexus concept vehicle is an overland and off-road-focused version of its flagship LX570, as a follow up to the 2019 Lexus GX460 GXOR concept. It worked once again with the team at Expedition Overland to build the impressive pinnacle overland machine. The Lexus J201 concept truck might be a bit stealthy, but has all the right stuff to impress enthusiasts and general consumers alike. 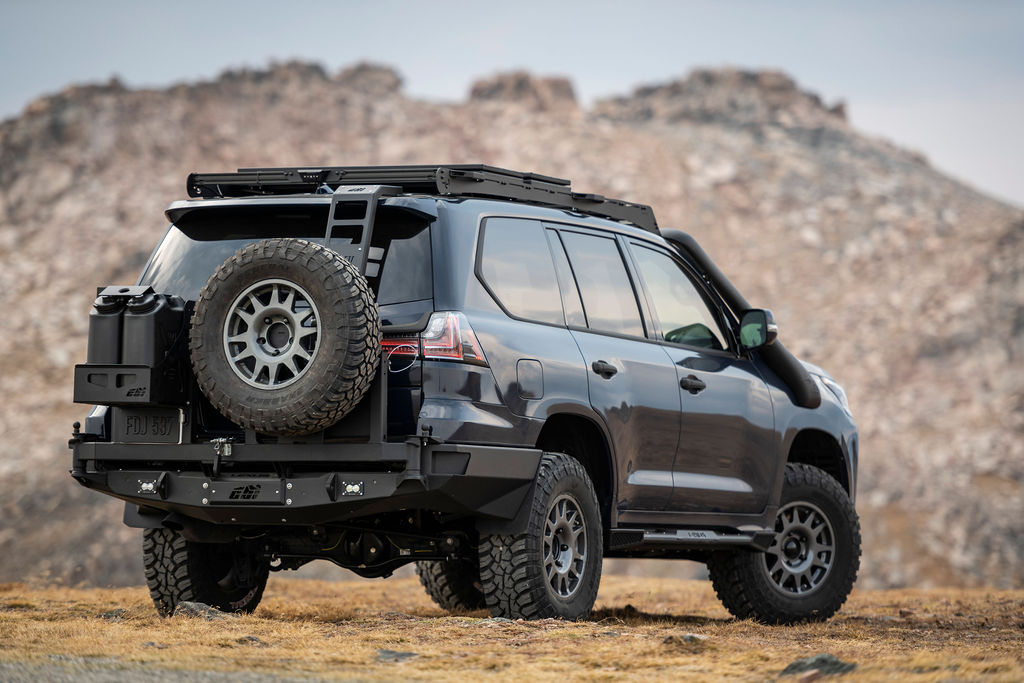 J201 nameplate comes from the internal model/platform code used for this upgraded LX570 within Lexus. The LX570 and sibling Toyota Land Cruiser 200 Series are generally known as the J200 vehicles. The Lexus LX570 is the largest and most luxurious SUV in the Toyota family of vehicles. It’s been around since 2008 and besides some substantial facelifts has remained relatively unchanged over the past 12-years.

Expedition Overland engineers bolted on a perfect array of aftermarket parts to the LX570 to give us the J201 concept truck. 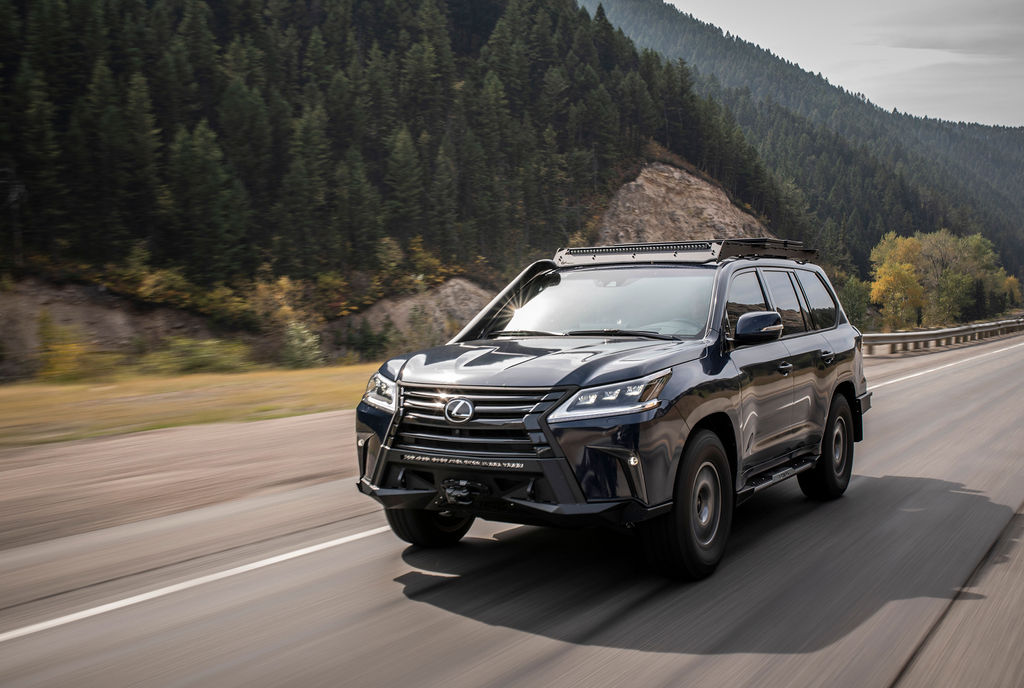 The Lexus LX570 comes stock with a 5.7L V8 3UR-FE Engine backed by an 8-speed automatic. This setup puts out 383 hp and 403 lb.-ft. of torque. For the Lexus J201 concept truck engineers added a Magnuson Supercharger, bumping the power up to 550 hp and 550 lb.-ft. of torque. That big engine also now breaths a bit easier through a TJM Airtec Snorkel raised air intake.

This truck will no doubt need those extra ponies under the hood with all added weight of upgrades. Stock, the LX570 already weighs in at about 6,000 lbs. To help the truck cope with the extra weight of all the upgrades and the big power gains it has also been fitted with 4.30 Nitro Gears. The differentials were finished off with the ultimate get unstuck tool, ARB Air Lockers. 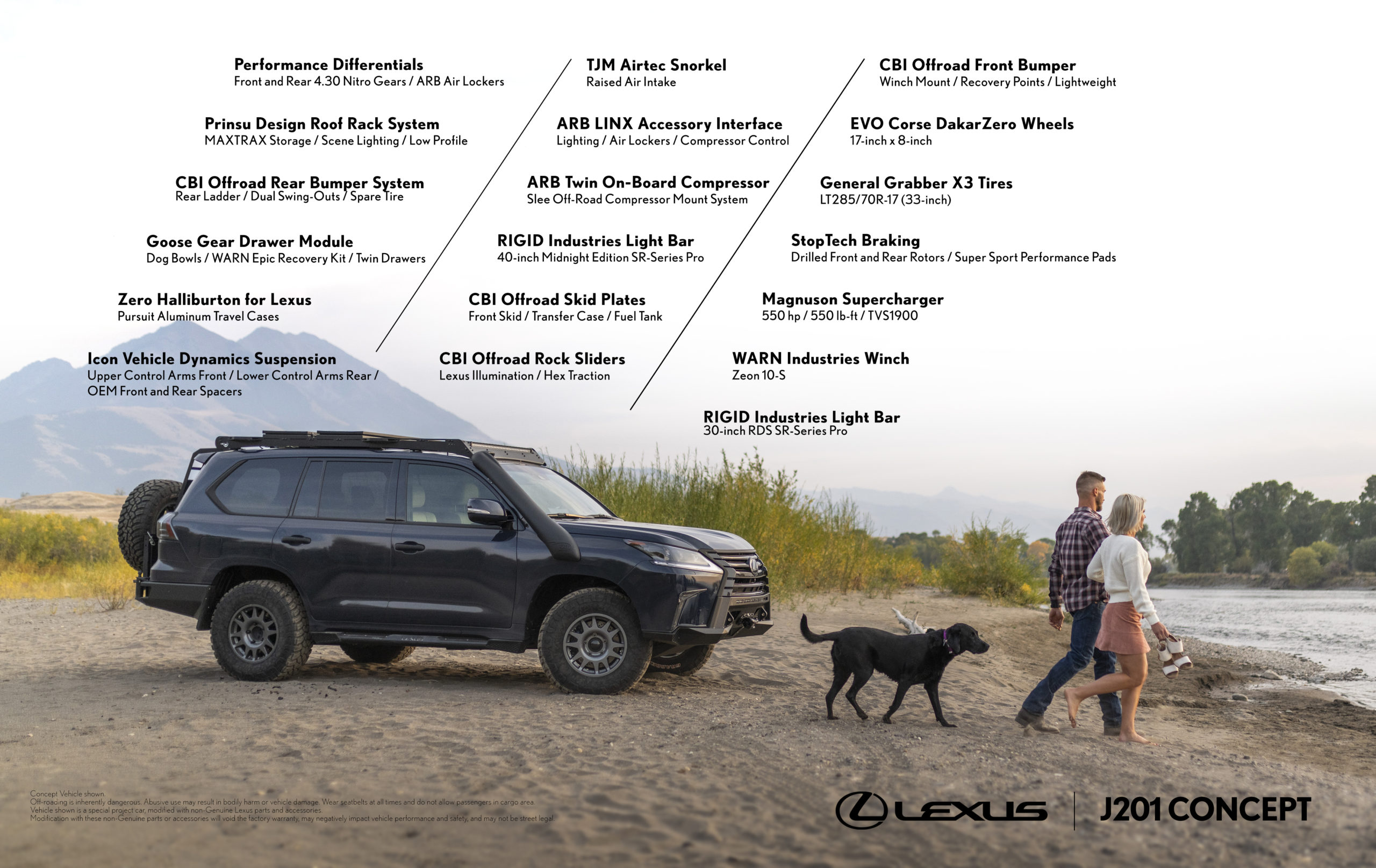 A 20 or 21-inc wheel in about a 31-inch tire comes standard on the LX570. For the J201 concept truck 33-inch General Grabber X3 tires are fitted on 17×8 EVO Course Dakar Zero Wheels. While that extra 2-inches of tire height will help with ground clearance quite a bit, the real win is the huge increase in tire sidewall. That extra up to 4-inches of extra sidewall should make for a much more comfortable ride on a variety of terrain, and allow the tires to be aired down to low PSIs for the best traction off-road.

That much more tire will no doubt create more rolling mass. Not to mention the added weight of the rest of the accessories on the truck. In order to ensure this big off-road luxury beast can stop quickly, StopTech drilled and slotted front and rear rotors were fitted. Super Sport Performance Brake Pads are also employed. 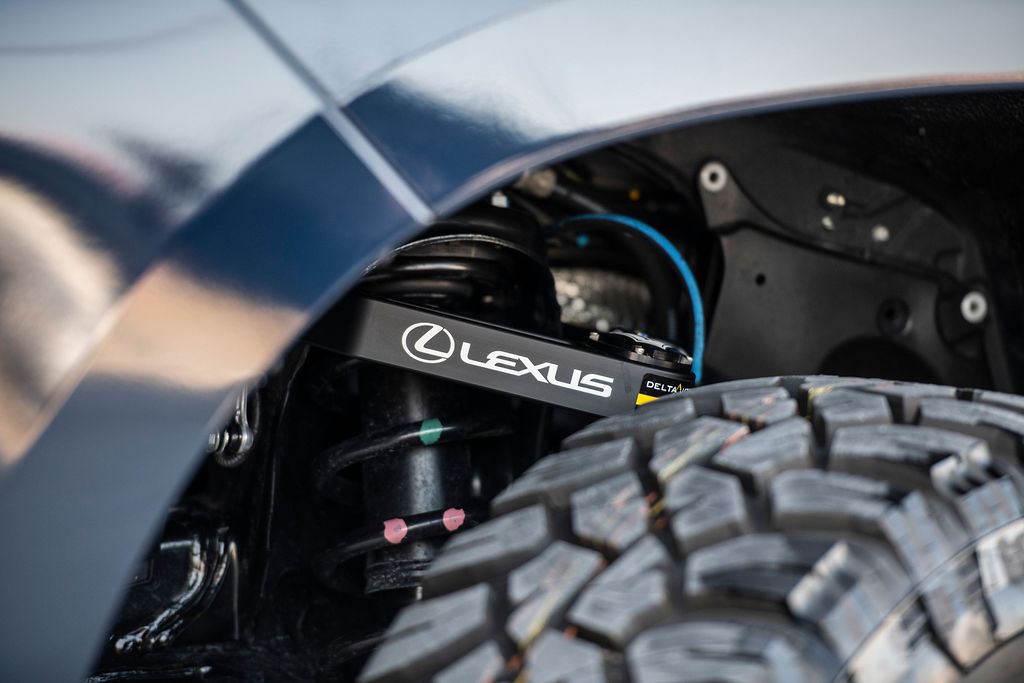 To fit those big tires an OEM spacer lift was used along with upper and lower control arms from Icon Vehicle Dynamics. The factory airbag system was retained, with the OEM height sensors adjusted appropriately. This system gives the truck about 2.8-inches of height adjustment. 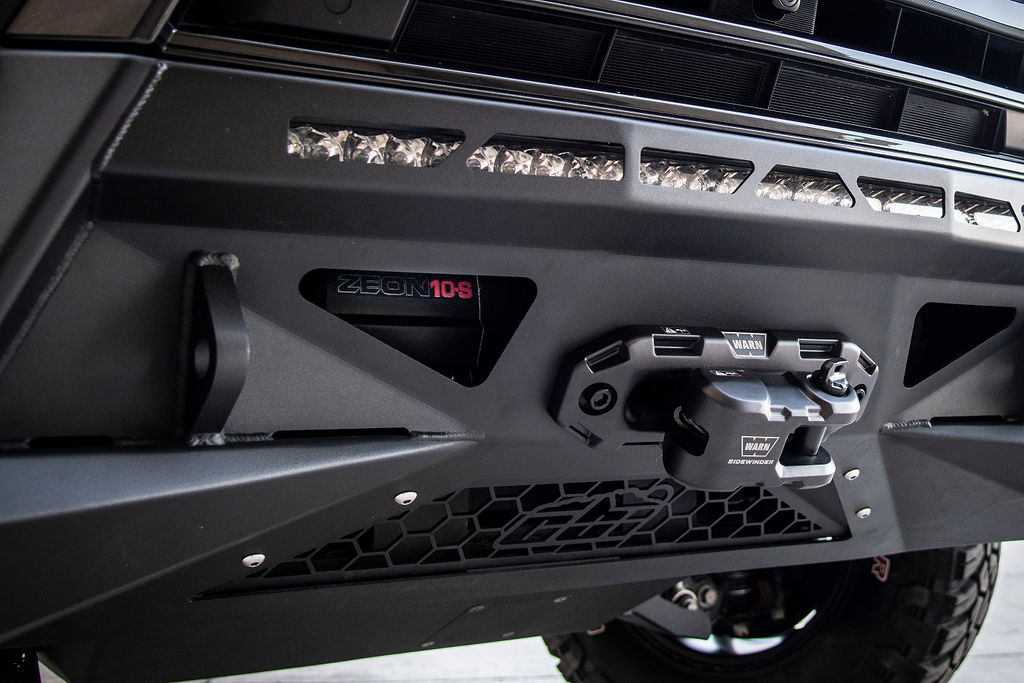 Up front the truck gets a CBI Offroad front bumper with integrated RIGID 30-inch RDS SR-Series Pro lightbar and Warn Zeon 10-S Winch. It is finished off with a Warn Epic Hawse Fairlead and Warn Epic Sidewinder Shackle. We’re not sure if the front bumper helps the looks of the normally massive front grille of the truck or if it makes the truck look like it got its face kicked in.

The rear gets a double swing-out rear bumper from CBI Offroad. The bumper holds a full-size spare tire, dual Scepter 5-gallon water cans, and some Baja Designs S2 Sport Lighting. The jerry cans on the back look cool in their matching black color but are for water only. While you for sure need water on your adventures, we’re sure you’d want to swap at least one of those out for extra fuel to feed the hungry supercharged V-8 in this big heavy rig.

Up top the Lexus J201 concept truck gets a slick low profile Prinsu Design Roof Rack system. The rack holds two thin cargo boxes which hold the MAXTRAX traction boards. On the front of the rack is an integrated 40-inch SR-Series Spot Midnight RIGID Industries light bar. Along the sides of the rack are small LED lights that provide great area lighting around camp.

Under the truck, you’ll find CBI skid plates and rock sliders. There is a front skid, transfer case skid, and fuel tank skid. The rock sliders feature an illuminated Lexus logo and traction steps to help you get in and out of this lifted truck. 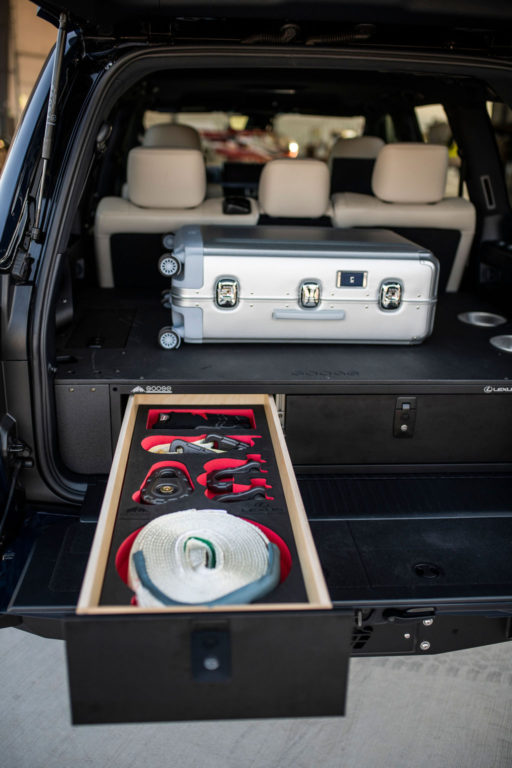 The interior has been left largely untouched and full of all the luxury that you’d expect out of this flagship Lexus SUV. Two major upgrades have been fitted inside, however; an ARB LINX system up front and a Goose Gear drawer system in the back.

The ARB LINX accessory interface is a smartphone-sized touch-screen that allows you to easily control and monitor all the accessories that have been added to the vehicle. On the J201 concept, that means controlling the lighting, air lockers, and ARB dual compressor. The system can also monitor the battery and provides a cool angle meter for off-road adventures. The ARB LINX interface is mounted in the ceiling console in the J201.

In the back of the truck is a custom Goose Gear platform drawer system. The custom system in the Lexus J201 even has 2 integrated dog bowls. While a fun idea, dogs generally make a mess when drinking out of a bowl and you wouldn’t want all that water all over the inside of the truck. Besides, when moving the water would just splash around anyway. In one of the drawers is a custom insert system that holds a quality Warn Epic Recovery Kit. While the kit is an essential set of recovery tools for off-road adventures and looks amazing in the inserts, it would be more useful and secure in a recovery bag (which it comes in when you buy it). The metal hardware in the kit is not secured in the drawers, so when hitting big bumps they are sure to fly upwards and bang around in the drawer. 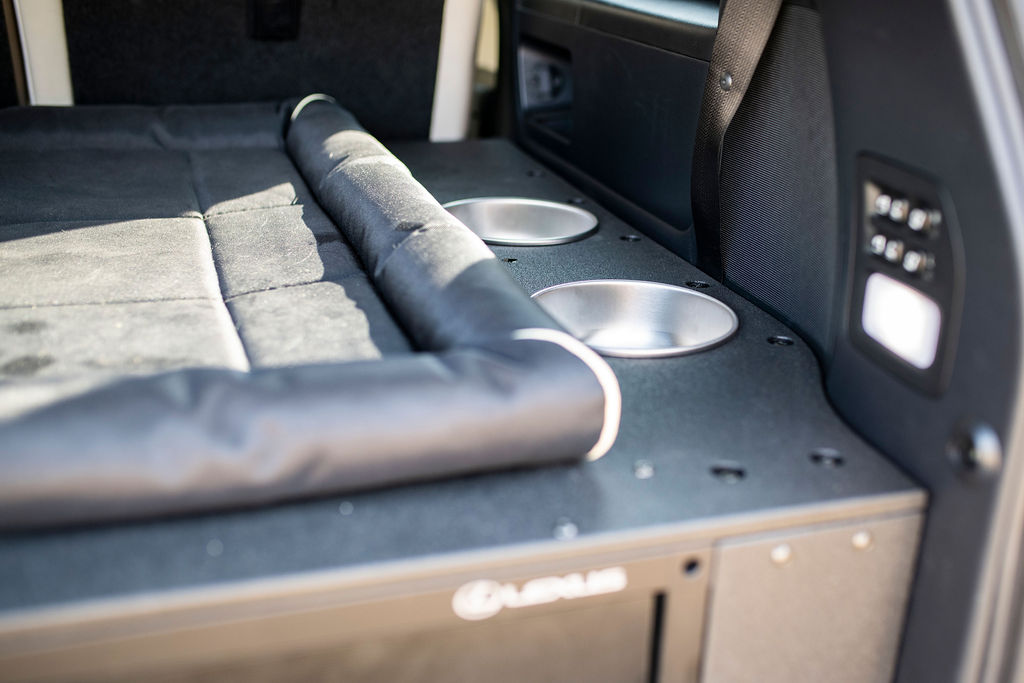 Lexus finished off the J201 build with a set of Zero Halliburton Pursuit aluminum travel cases. These suitcases look beautiful, but will no doubt slide all over the place when carried on top of the Goose Gear platform. Always remember to secure all your gear when traveling, but especially when off-road.

This concept isn’t all show and no go. Lexus is set to debut the build during the Rebelle Rally, a 10-day women’s only off-road navigation rally over 1,200 miles of challenging terrain in Nevada and California. The J120 will be racing with the team The X Elles, the defending champions Rachelle Croft and Taylor Pawley. The Rebelle Rally starts on October 8th and can be watched live HERE. 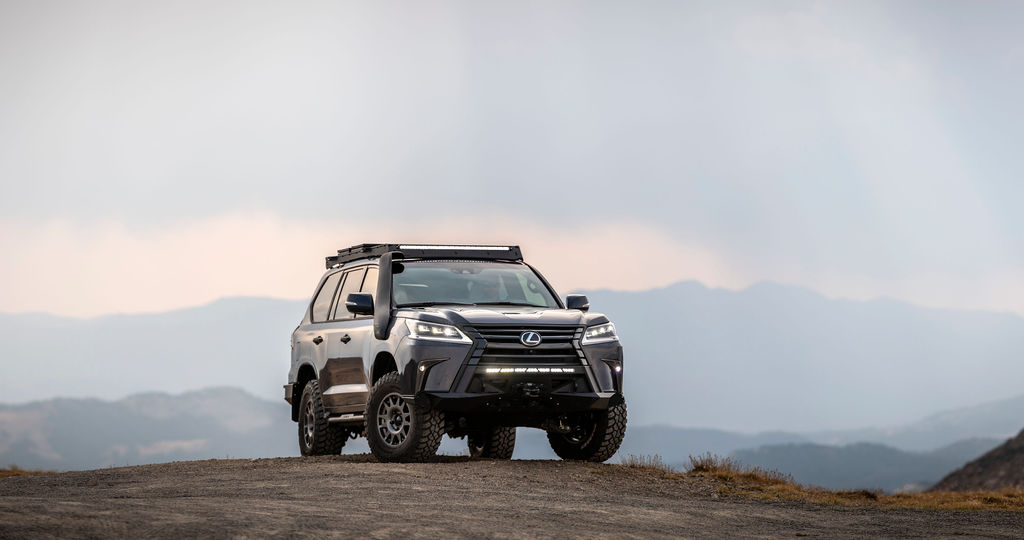