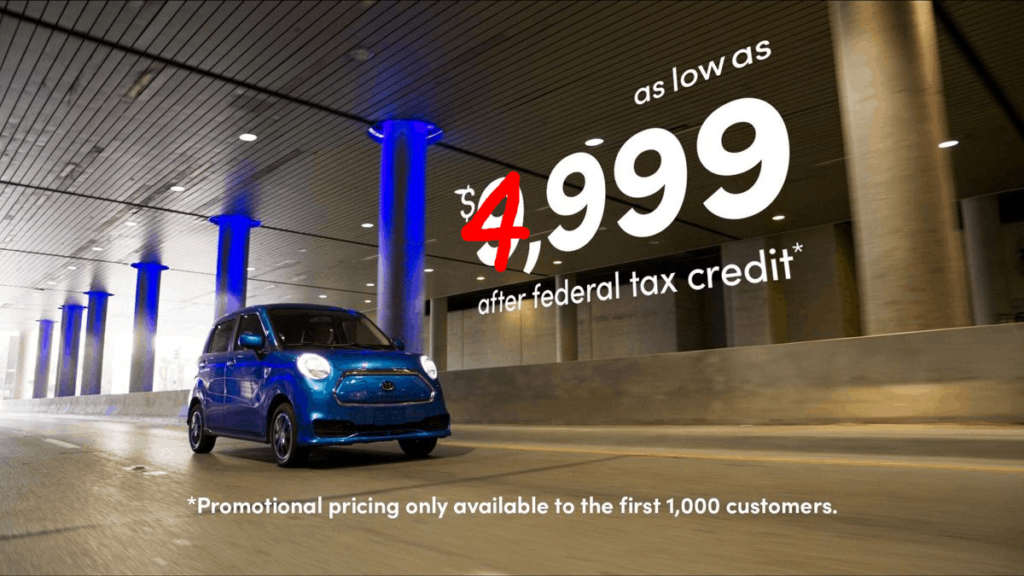 Say hello to Kandi, the latest Chinese automaker to land on our shores. Kandi is initially bringing two cars to the U.S. market, the K23 and K27. Both are slated to land in customer’s driveways later this year. Besides the horribly forgettable names, both are surprisingly well-equipped, fit four adults, and can go highway(ish) speeds. And by leveraging a lot of incentives, you could theoretically buy this new car for $5,000. Read on to find out how.

Kandi is a Chinese mark owned in part by corporate behemoth Zhejiang Geely Holding Group. Geely is a massive automotive company in its own right in China, and the parent company even recently expanded by acquired both Volvo and Lotus. Many Chinese auto companies have tried to get into the U.S. market, even Geely, but it looks like Kandi might be one of the first to get its proverbial foot in the door. Other Chinese auto companies like Chery, Zoyte, Vantas, and GAC are all heavy hitters in China. We might see on our roadways soon (ish) as well. Covid and trade wars have upended many of these plans as of late, but Kandi is still pushing forward. 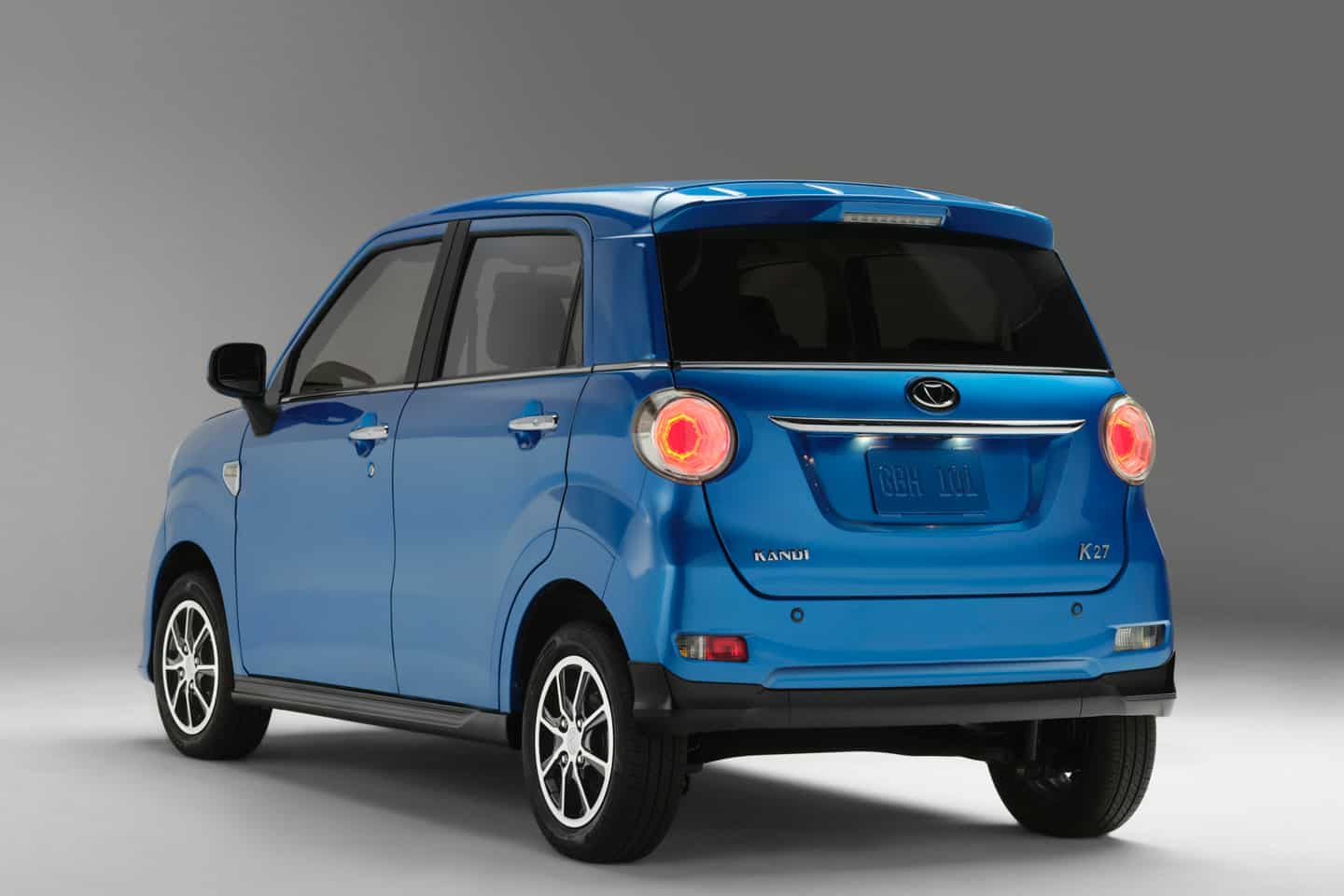 Initial offerings by Kandi will be the K23 and K27 pure-electric cars. Both offer large touchscreen interfaces and modern safety amenities, things you’d expect of a modern car. Both are also single electric motor front-wheel-drive (FWD) cars. Kandi also offers a relatively robust warranty, for such inexpensive cars; 4-year/50,000 mile materials and workmanship and 8-years/62,000 miles on the battery.

If you’ve found yourself accumulating speeding tickets recently, Kandi is your medicine. The K27 tops out at 63 mph, while the K23 can all the way up to a whopping 70 mph. The K27 manages with 60 hp, while the K27 gets by with 65 hp.

The K23 is the roomier Kandi, has more than twice the battery, and gets you up to 188 miles of range. With a range of only 100-miles and the aforementioned paltry top speed, the Kandi K27 is decidedly a city car. The K27 is somehow cute and funny looking at the same time – the baby panda of electric vehicles.

For full vehicle specs, or to reserve yours now, check out Kandi’s webpage. 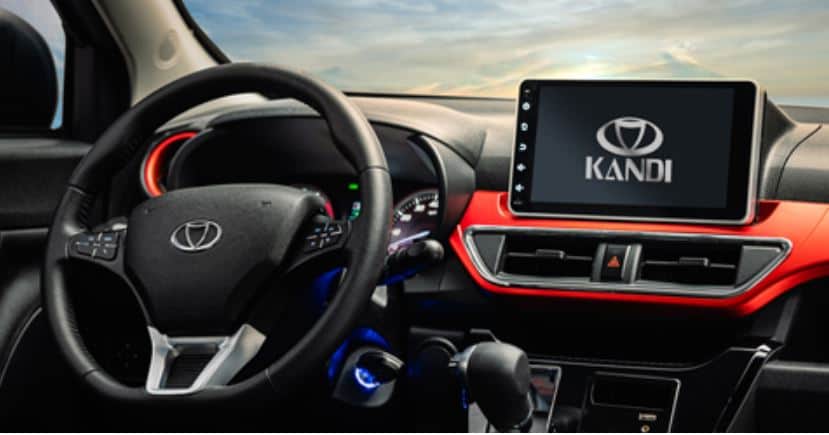 Show Me The Rebates: The $5K New Car

Now you might argue that not everyone has enough tax liability to receive the full $7,500 federal rebate, but you can spread that out over multiple years. Many states offer similar incentives as Oregon – California, Colorado, and New Jersey are also particularly generous.

You can also argue that not everyone qualifies as low-income, which is true. Let’s take the example of a struggling freelance automotive journalist in Portland, OR. The cost of living has risen so dramatically that the low-to-middle income threshold is now $86,000 per year. Looks like our auto journo, and many many others, won’t have a problem getting that extra $5,000 income-bracket rebate after all!

So did we pre-order? Heck yeah, we did! Stay tuned to see whether we make bank renting our Kandi out on Turo, or whether it depreciates so fast and is so unreliable that we would have been better served buying a 1975 Pinto. The Kandi K27 is easily the cutest 9-inch tablet with four wheels.

There’s reason to think the Kandi cars may get even cuter and smaller though – this photo tweeted by Kandi USA shows a smiley fish-faced K22. The model K22 in China is in Smart Car territory but with just 35 kW (47 hp) and a range of 125 miles. I wonder how cheap you could buy one of these little two-seaters after rebates? Is the sub-$3,000 new car possible in 2021? 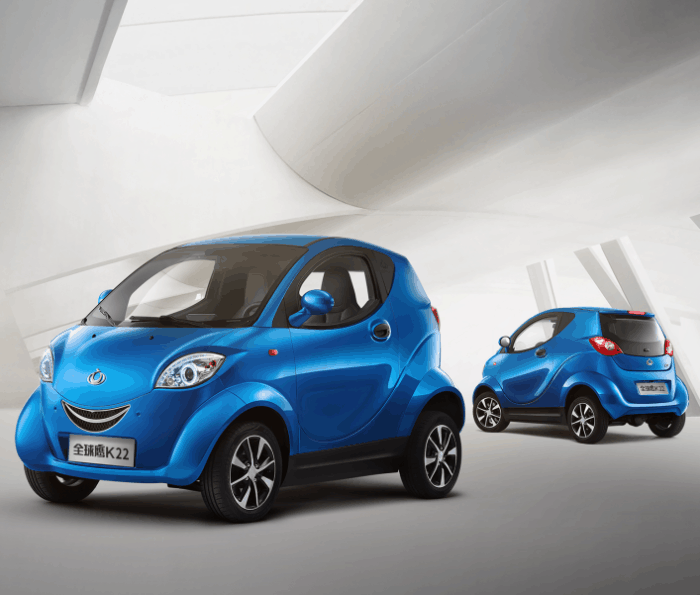 How low can you go?

It’s hard to find a better deal on any new vehicle let alone a new electric vehicle. But, if you’re really on a budget we found a local Portland EV buy that makes a Kandi look like a Bentley. For just $1,000 on Craigslist this 2007 Zap Xebra electric can be yours – and you might actually get more head-turns with this striped three-wheeler. You’ll need to throw a few hundred dollars more at a charger, and some-reassembly is required. On the upside, insurance is cheap, as it qualifies as a motorcycle. 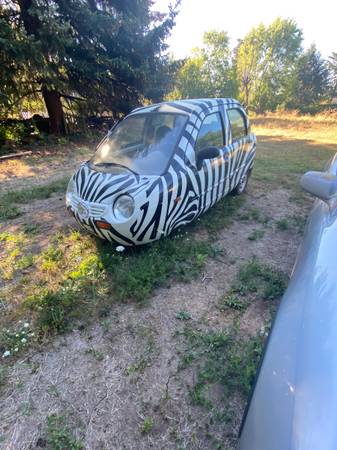 EV Leasing Options Might Be An Even Better Value

Maybe you’re not ready to gamble on an unknown Chinese brand. EV leases on vehicle brands you’re already familiar with are also currently heavily incentivized – in some states remarkably so. For example, as of this writing, Nissan of Sunnyvale, CA will send you off with a 2020 Nissan Leaf SV for 24 months at $99/month and $1,499 down. A Leaf can take you 150 miles on a charge and (though arguably not as cute as the Kandi) is a mature and polished EV.

Are We Ready For “Made-in-China” on Our Roads?

After the debacle that was exploding hoverboards, there’s reason to be skeptical about Chinese-made electric transportation. American car culture is better known for Hemis and truck-nuts, and Kandi will have its work cut out trying to sway us with smiley fish faces and panda eyes. The styling feels VERY Chinese and models like K23 sound more like death star detention blocks than cars.

Any way you look at it, launching a Chinese brand in the US during a global Pandemic under the Trump Administration’s watch takes some serious panda nuts. 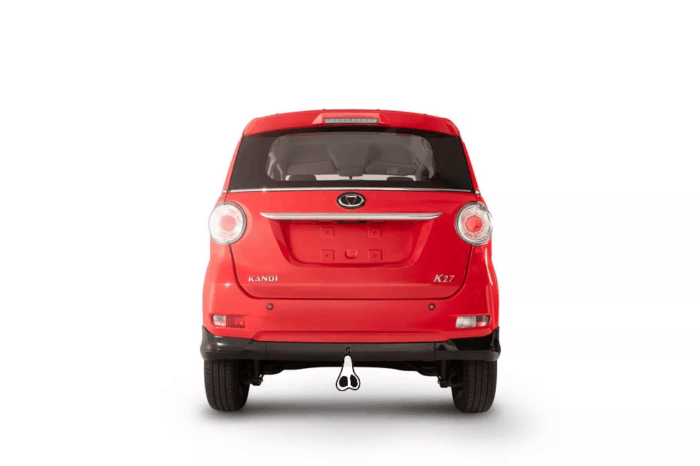 It’s hard to deny Kandi’s value proposition, and only time will tell if they’ll be the next Daewoo or the next Toyota. In any case, we’re eager to get behind the wheel of our own Kandi K27 and roll out for some dim-sum in “style.” Stay tuned!