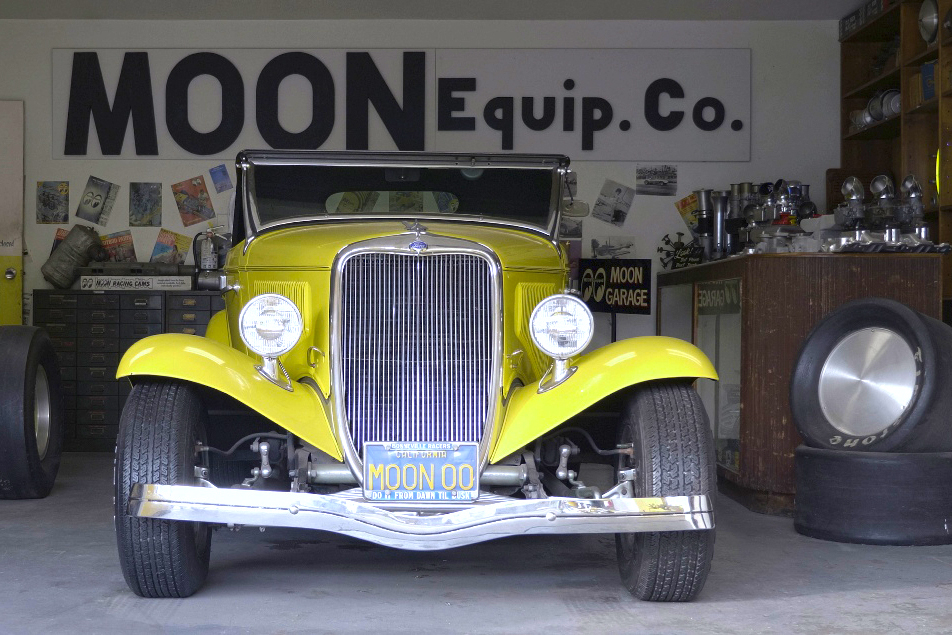 Mooneyes was present for the beginning of hot rodding in Southern California, thanks to the efforts of founder Dean Moon. His products helped advance the pursuit of speed by hot rodders on the nearby dry salt lake beds. After his death, Shige Suganuma and Chico Kodama took over the legacy and expanded the brand’s international reach for nearly 30-years. Now filmmaker Ming Lai is seeking crowdfunding assistance in finishing up “Craft of Speed“, a documentary on Mooneyes and Dean Moon.

Dean Moon grew up in Santa Fe Springs, California, and was immersed in the blossoming hot rodding scene going on in Southern California. While in high school he developed, built, and sold a fuel block that allowed hot rodders to feed multiple carburetors from one fuel line with consistent pressure.

After World War II, Moon worked for a local car dealership and continued working on products for his and other’s cars. The nearby dry salt lakes offered a place for testing his products. Of course, neighboring streets were a testbed too. During the Korean War, Moon enlisted and worked as a photographer, a skill that would be helpful later in his entrepreneurial career.

After the war, Moon returned to a garage behind his father’s diner and started full time on his hot rodding parts business. He sold a gas pedal in the shape of a foot, a design that has been replicated countless times since. He also developed the Moon gas tank that became a standard for hot rodders.

Thanks to the influence of the salt lake racers, he developed a spun aluminum wheel cover that removed some air turbulence/drag and added a few miles per hour speed for the drag racers. Despite being copied over the years by others, they are still referred to as Moon discs.

Dean Moon used his photography skills to showcase his products and write articles about the hot rodding legends that used his speed equipment. Moon also developed his signature logo of the two goggling eyes “Mooneyes” that has since graced the rides of numerous professional drag racers. It may be the most recognizable logo of any speed equipment firm.  Moon later was one of the founders of what became SEMA – Specialty Equipment Market Association.

Moon sponsored drag cars that wore a bright chrome yellow paint scheme with those Mooneyes displayed on the sides. Like many of the good guys, Dean Moon left this planet too soon. After his passing in 1987 and for a while after, the Mooneyes Company was on hold.

Shige Suganuma and Chico Kodama offered to buy the firm from Moon’s wife in 1992 and continue the hot rodding legacy. Suganuma was a distributor of Moon products. Suganuma stated “Dean Moon was a business partner, friend, mentor, and even a father figure to me. The more I got to know him, the more I admired him. That’s the reason why I started the business – not for money, but because of my respect for him.”

The Mooneyes brand is international and revered around the globe. In Japan, Mooneyes sponsors four car events each year (pre-Covid) that drew attendees from across the world. Their 30th anniversary Yokohama Hot Rod Custom Show is scheduled for December 2021.

The American shop is still located in the same building that Moon bought after the Korean War. That’s where they produce a variety of the Moon products.  The garage has seen a lot of hot rodding history. Moon even loaned out garage space for Carroll Shelby to make his first Shelby Cobra.

Kodama added, “When the director, Ming Lai, asked Shige and I if we would be interested in doing a documentary, we thought it would be a great opportunity to tell the incredible story of Mooneyes and help preserve hot rod history.”

Now documentarian and filmmaker Ming Lai is finishing up Craft of Speed, which recaps the Mooneyes legacy, and is seeking crowdfunding to wrap up the process. You can get a digital download of the film, once it is ready for distribution, for a minimum donation of $25. For deeper pockets, the sponsorship benefits grow and include possible tax deductions. Donate $5,000 or more to the crowdfunding and you will get a film credit as “Contributing Producer.”

Lai’s father-in-law actually had a 1932 Ford roadster that was bright chrome yellow and equipped with Moon parts. This served as Lai’s introduction to the Moon hot rodding history. Lai noted the film “spans from Moon’s creation of Mooneyes as an iconic American speed equipment & custom accessories company to Suganuma and Kodama’s growth of it into a coveted international brand.”

The filming started in October 2019 but Covid-19 halted actual filming for now. Lai is already editing what they produced and hopes to have the 90-minute film ready by July 2022. 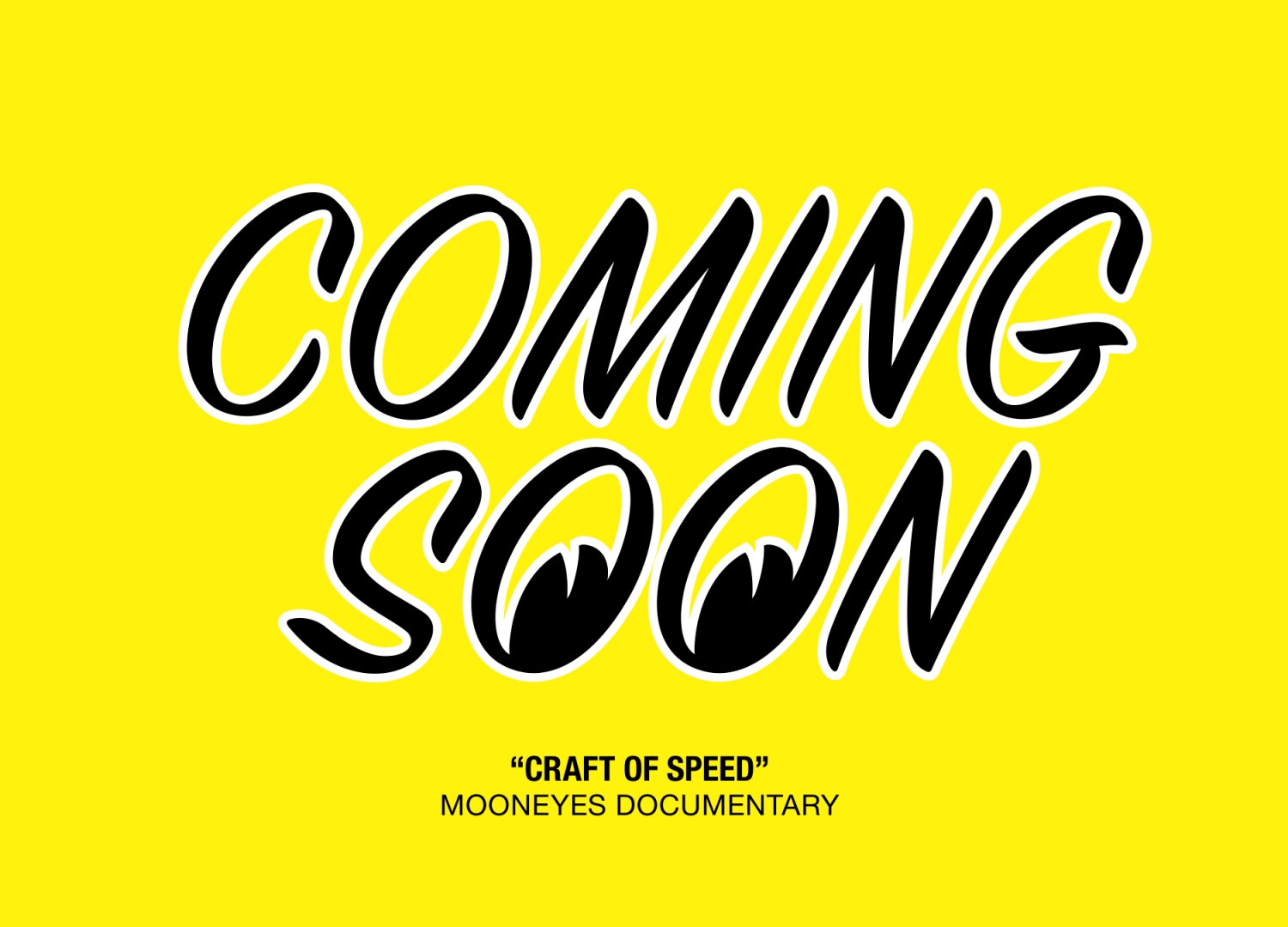 Dean Moon was certainly one of the first hot-rodding greats and it would be tremendous to see this film showcase his legacy and the continuing efforts of Suganuma and Kodama to carry on the Mooneyes products and culture.

You can find out more about the film at CraftOfSpeed.com, and support the crowdfunding campaign to see the film completed HERE.


Top 10 Mid-Engine Cars You Can Count On For Practicality
Best of 2019 Chrysler
Ranking The Top 10 Best Mercedes AMG Car Models Ever Tuned!
Best of 2020 Ford
The Psychology of Auto Nostalgia: Why We Love Old Cars
The History of Scion