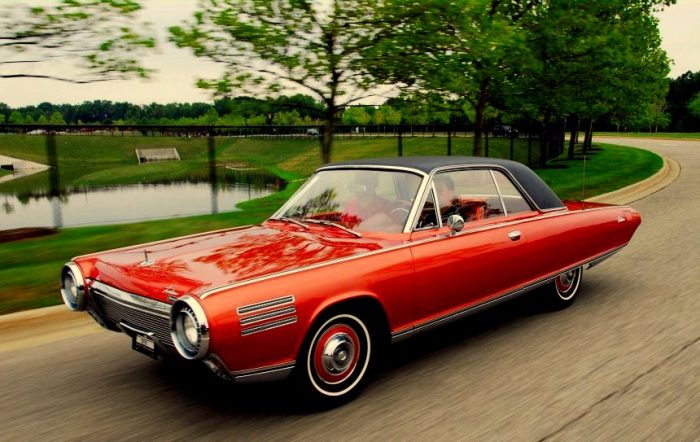 Above a certain size, aircraft use some form of gas turbine engine. They’re powerful, reliable, and compact. They’ve been tried in cars, too. These  creations are very strange machines, and very few street legal versions exist!

When one thinks of a jet engine, it’s a gas turbine that produces thrust directly from the combustion of fuel inside the engine. The result is a powerful, high temperature stream of air that pushes the aircraft down the runway and into the sky. Why this type of engine is great for aircraft, its application in motor vehicles is somewhat limited, as you’d melt pretty much anyone behind you. So it limits the use of jet engines for speed records, and very extreme auto racing.

For the most part, for cars that operated on the street, or were used on a race track with other cars around, builders selected gas turbines originally designed for helicopters, where the engine’s role wasn’t to deliver thrust, but rather power a shaft (the helicopter rotors) which made conversion to automotive use considerably easier. Let’s look at those first as a warm-up to the fire-breathing monsters: 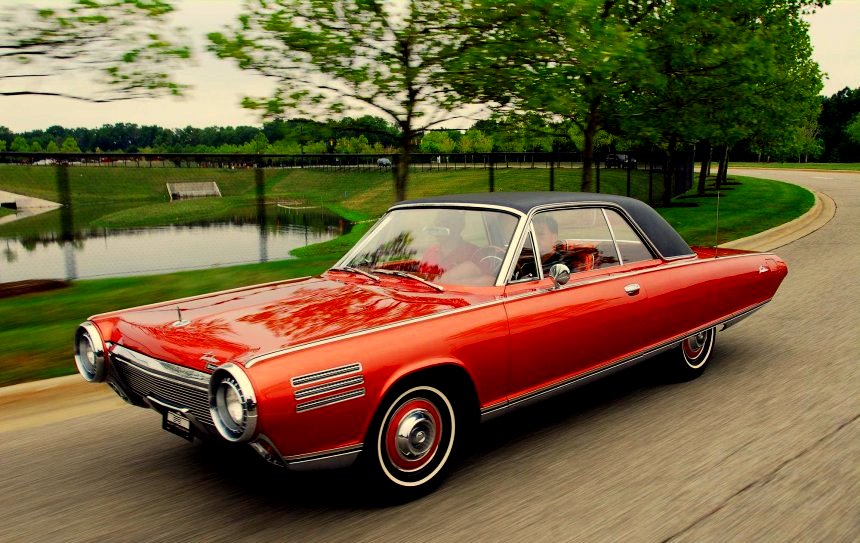 Looking much like a Thunderbird, Chrysler designed these coupes and had Ghia in Turin, Italy build the body. Assembly of the 55 experimental cars was in the US and each was fitted with a Chrysler gas turbine, made specifically for automotive applications, and produced 130 hp (but 425 lb-ft of torque). 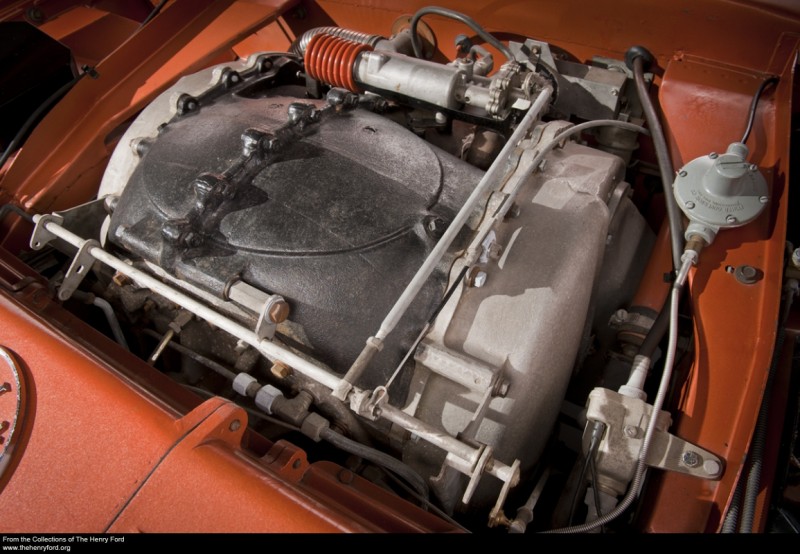 50 “production” cars were loaned out to 203 drivers over the course of several years, accumulating over a million miles. Chrysler was not satisfied with the results, recalling the cars and crushing 43 of them. The remaining turbine car models were either retained by Chrysler, or had their turbines disabled and donated to museums, Chrysler continued its gas turbine program into the late 1970s but was never satisfied with the results. 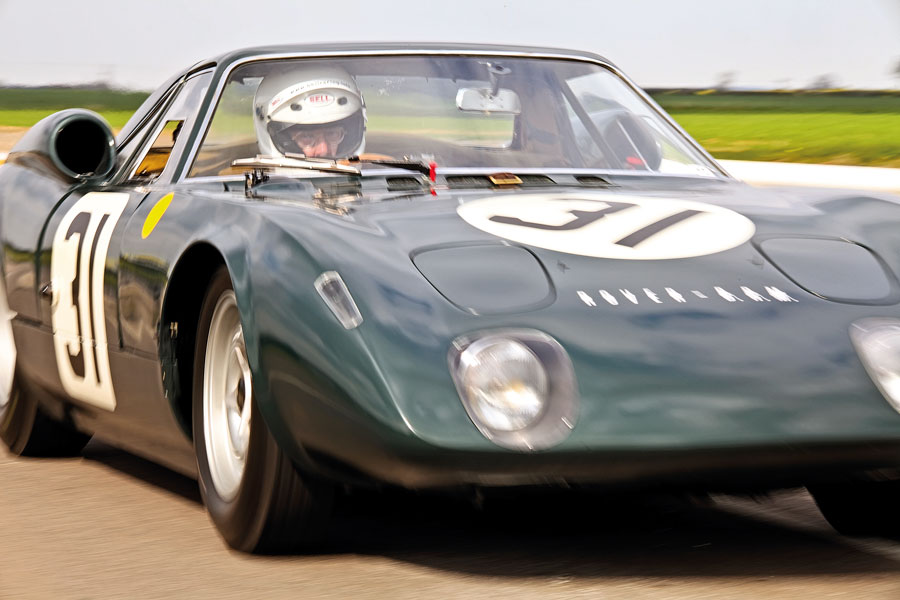 English manufacturer Rover (who was then building many more cars than Land Rovers) had been experimenting with gas turbine powered car technology throughout the 1950s. For the 1963 24 Hours of Le Mans Rover teamed up with race car manufacturer BRM to enter a gas turbine sports car in the experimental class. Since it was allowed to stretch the rules as an experimental, it did well in the race, finishing 8th on the road, delighting racing fans and proving that jet cars could be competitive. If you wanted to drive a jet car, a real jet-powered car, one of these would be the perfect starting vehicle. 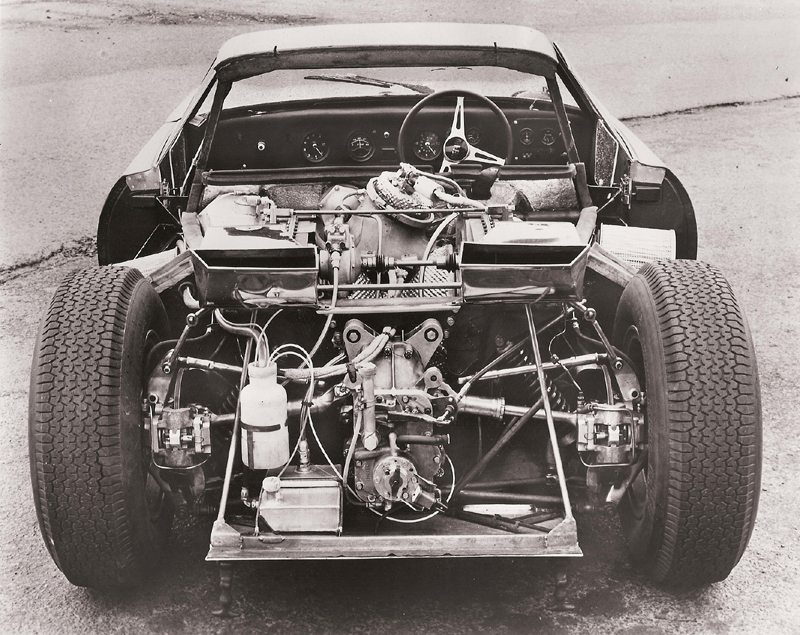 In 1964 a new coupe body was fitted, but the car was damaged in transport and did not compete that year. In 1965, the car was no longer running as experimental, classified with the  2.0 L cars. BRM took no chances and brought their ace drivers: Jackie Stewart and Graham Hill.  Despite damage to the gas turbine that should have stopped it cold, the pair brought the car home 10th, 7th in class. 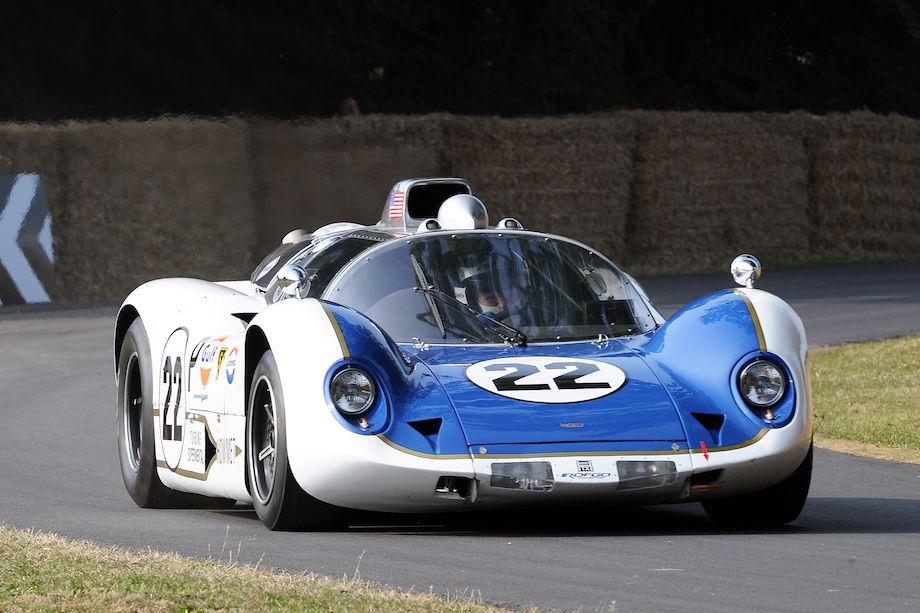 The Howmet TX (Turbine eXperimental) was an American sports prototype racing car designed in 1968 to take up where the Rover-BRM program had left off.  The brainchild of racing driver Ray Heppenstall,  the TX  was based on a chassis built by sports racer constructor McKee Engineering. 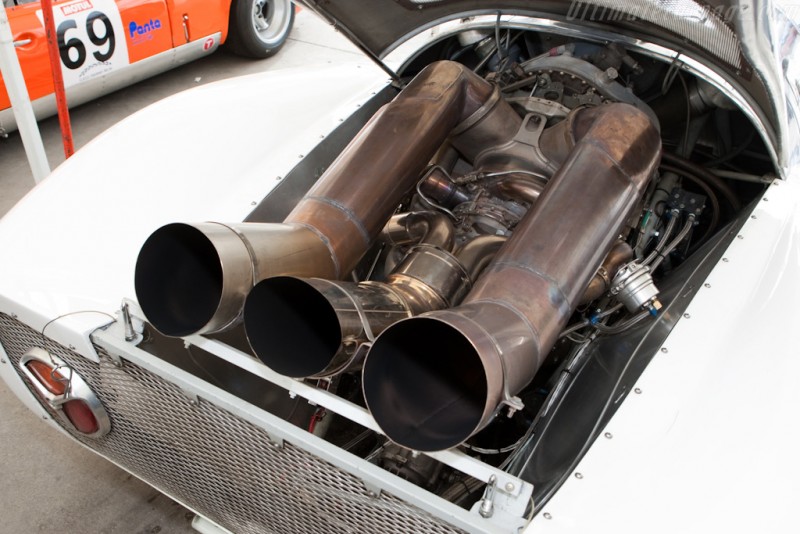 Surplus gas turbine engines were leased from Continental Aviation, and financial backing  was provided by Howmet Corporation, a manufacturer of gas turbine components. The turbine weighed in at a lightweight 170 lbs. and produced 350 hp, competitive in the class it was assigned. Despite some strong finishes in minor US races, the Howmet failed to perform as promised at the international races at Daytona, Sebring, and Le Mans. Howmet withdrew its support and the program ended. 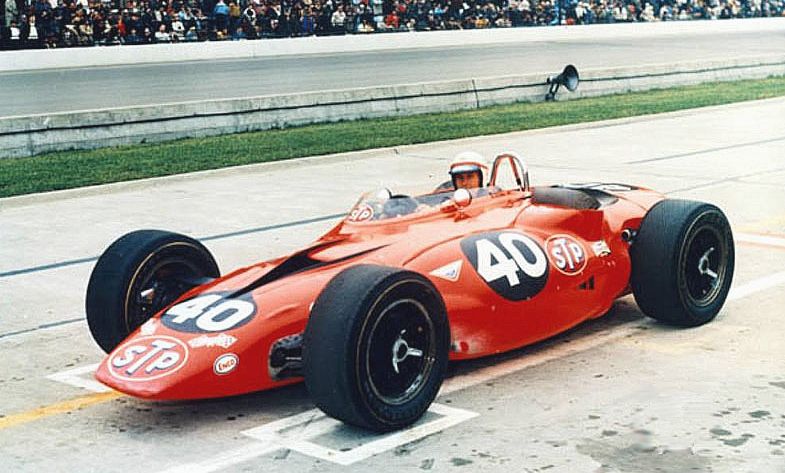 Andy Grantelli, probably most famous now for STP, bought in on an idea presented by race car designer Ken Wallis – powering an Indy racer with a gas turbine engine.  The design, without the bodywork, looked much like a Honda 2&4, with the driver on one side, but with a big gas turbine engine on the other. Granatelli made an extremely lucrative deal with former winner Parnelli Jones (should he have won, Jones would have personally earned about $1.3 million in today’s dollars). Which he almost did. He led the final 45 laps and looked untouchable, until a bearing seal failed and he was out of the race with 5 laps to go. 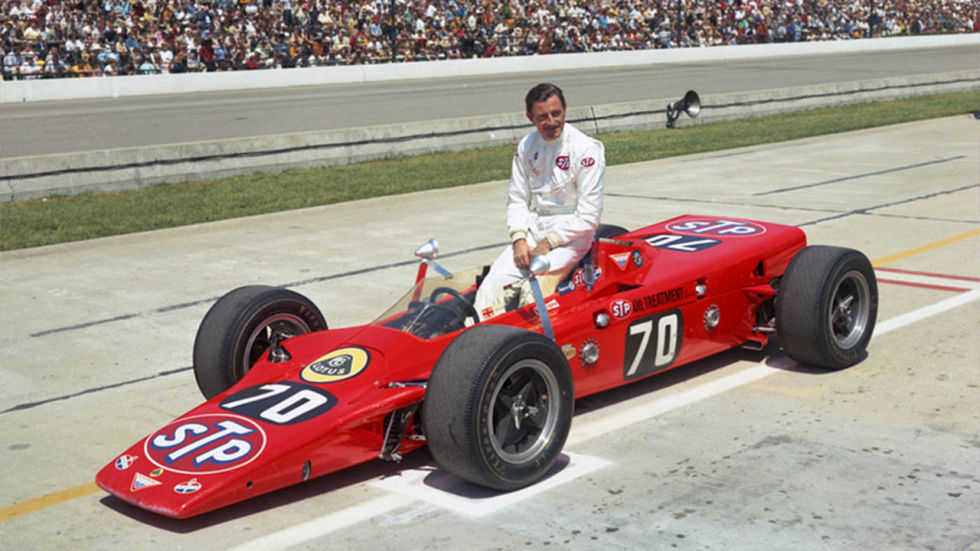 The next year, more gas turbine powered cars were entered, despite the fact that the air inlet size had been significantly reduced by rules makers to reduce the power of the turbines. Wallis had moved over to Carroll Shelby’s team and built an improved version of the ’67 car. Granatelli took his money to Lotus and Colin Chapman who had created a more conventional chassis, but covered it in wedge-shaped bodywork designed to generated downforce (wings were still banned at Indy at the time). 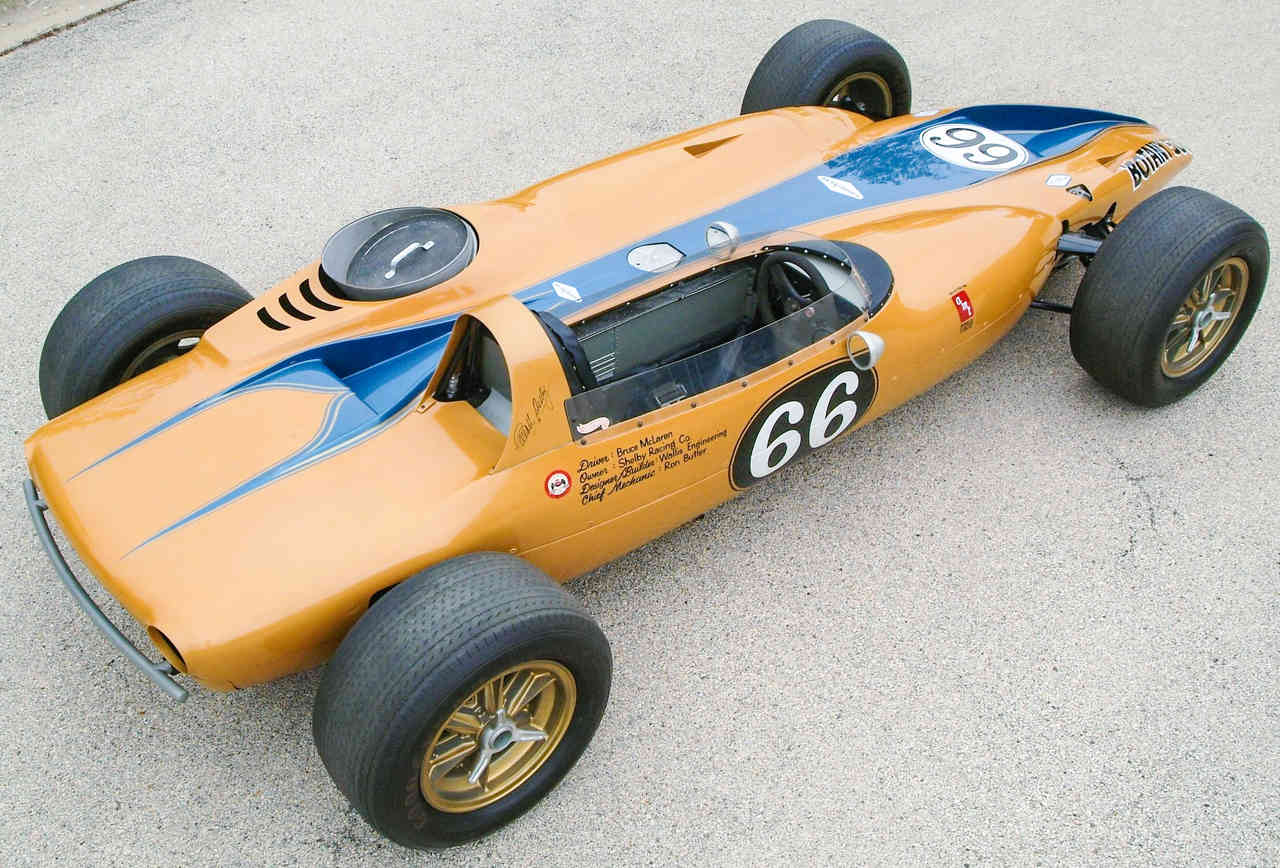 Shelby went home early, concerned that the innovative variable sized inlet that designer Wallis concocted might be deemed illegal, and with all his business interests the last thing Shelby needed was to be called a cheater.

The Lotus cars didn’t distinguish themselves in the race. They brought four cars. One was heavily damaged in practice in the fatal crash of Mike Spence. One crashed out early, the other two broke down just laps apart due to the same part failure. Rules maker again reduced the inlet air of the air intake for turbines (think of a NASCAR restrictor plate with tiny little holes) and no further serious attempts were made racing a gas turbine at Indy until they were banned outright. 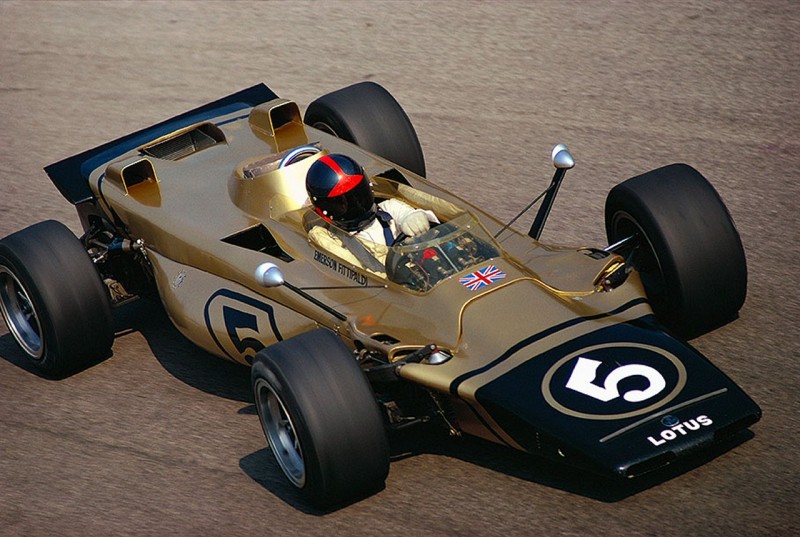 On a side note: The chassis in which Spence had died was shipped back to England and converted into a gas turbine F1 car. It competed in three races in 1971, Emerson Fittipaldi delivering the best finish: an eight at the Italian GP.

Why there’s no feature film or even a PBS documentary  about these two competitors and what they achieved, I can’t even begin to explain why (Hello? Ken Burns?).

But for a period through the 1960s, a battle as hard fought as any was being played out on the hard-packed salt flats of western Utah. 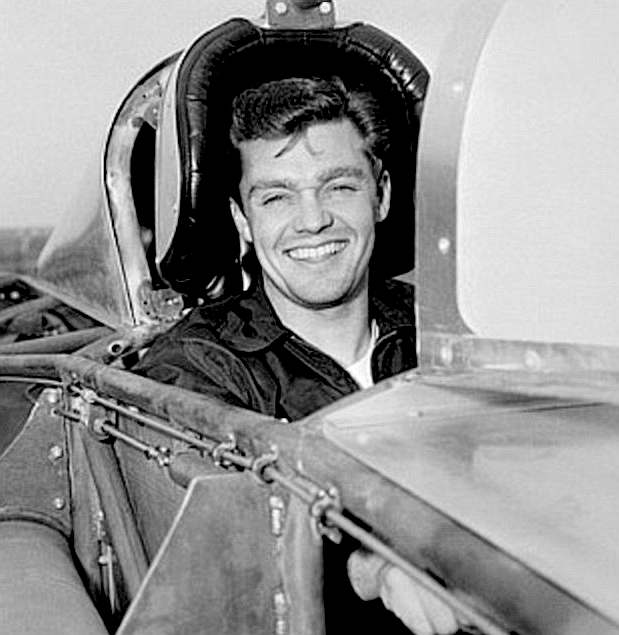 On one side, Craig Breedlove, a clean-cut Californian, a drag racer who looked like an astronaut, assembled a drag racing team around him tapping into the aerospace knowledge and materials so easily found around Los Angeles in those days, and built jet dragsters with carefully selected parts that looked like they’d come from NASA. 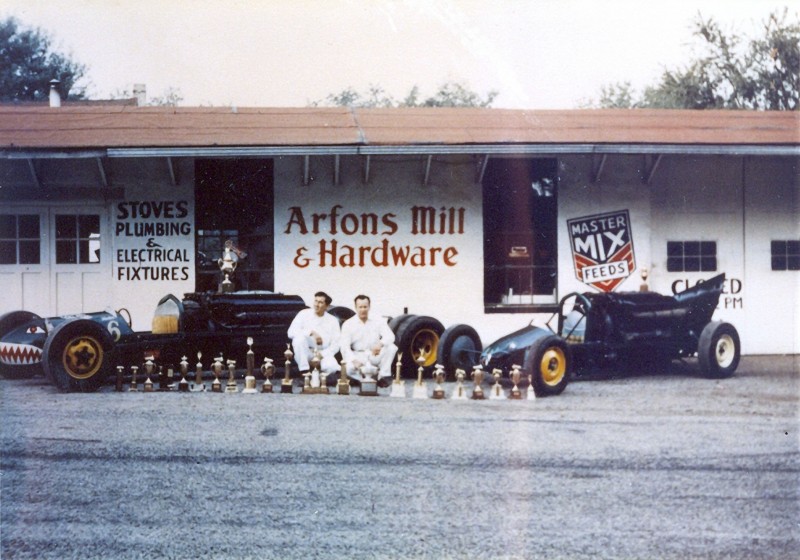 On the other side, two sons of a feed store owner from rural Ohio, more often than not adversaries rather than partners. Art and Walt Arfons built their jet dragster hot rod models from what they could scavenge, and despite the fact they were never as sophisticated looking as Breedlove’s, they were solid and they did the job. Where one scavenges a General Electric J85 turbine engine from is beyond us. Still, they must’ve managed it somehow!

Both were after the same thing: the title of the Fastest Man on Earth; the holder of the world’s Land Speed Record (LSR), which had not been in US hands since 1906. 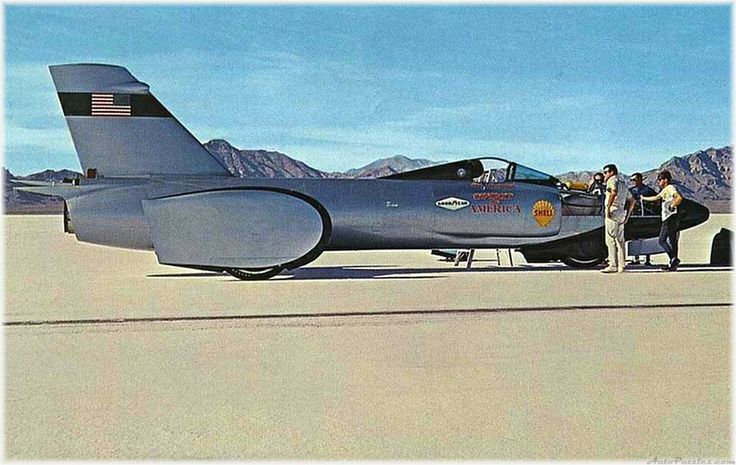 In 1963, Breedlove drove his Spirit of America drag racer powered by a J-47 jet engine out of an F-86 fighter aircraft to set a new land speed record of 407 mph, an increase of 20% over the old record. But since Spirit of America had only three wheels, it didn’t qualify for the automobile record, which Breedlove would attempt to rectify the following year. 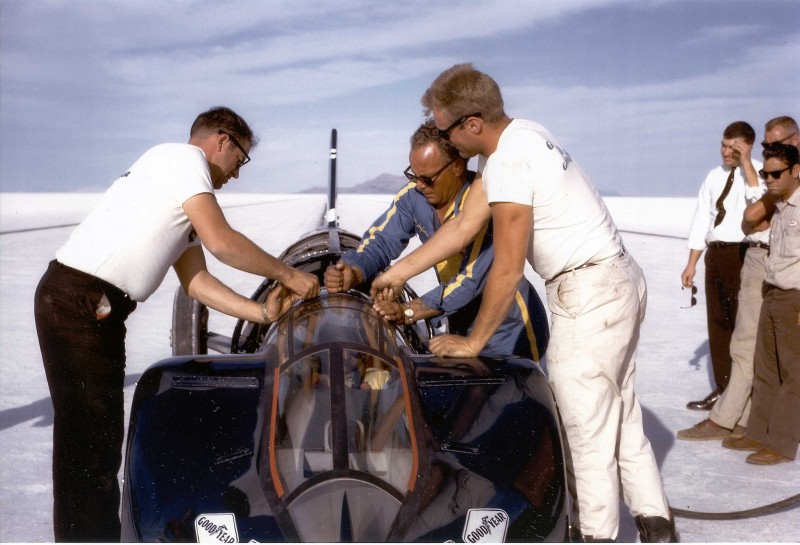 In 1964, Walt Arfons appeared with a jet enginel car to break Breedlove’s record (which while not official, was treated as the bar by competitors). Named the Wingfoot Express in honor of its sponsor Goodyear, it was built around a Westinghouse J-46 afterburning turbojet engine. Because of a stroke he’d suffered crashing on a practice run months earlier, Walt turned the wheel over to the car’s designer Tom Green, who set a new, and official, land speed record at 413 and retired on the spot. 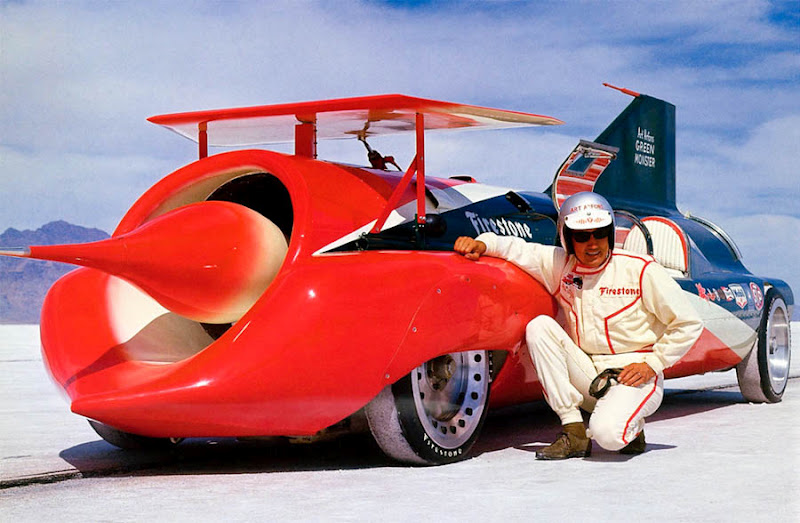 Tom’s fame, whatever there was of it, was brief. Three days later Art, Walt’s brother, rolled out his J79 powered Green Monster, and topped Green’s record by almost 21 mph. 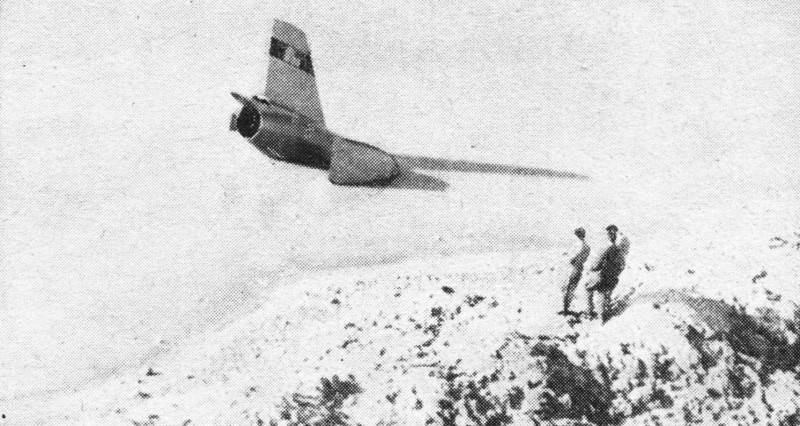 One week after Art took the record from his brother, Breedlove took it away from Art. On his record run Breedlove veered out of control at 500 mph, flew over a dike, and nosed into a briney pond. Afterward, he joked, “And now for my next act, I’m going to set myself on fire.” But that wasn’t the finale. Art Arfons made further adjustments to his engine and made a pair of passes averaging 536-mph (speeds are the average of two runs).

In just a few weeks, the world record had passed hands four times and increased 129 mph, a feat never before seen or repeated. 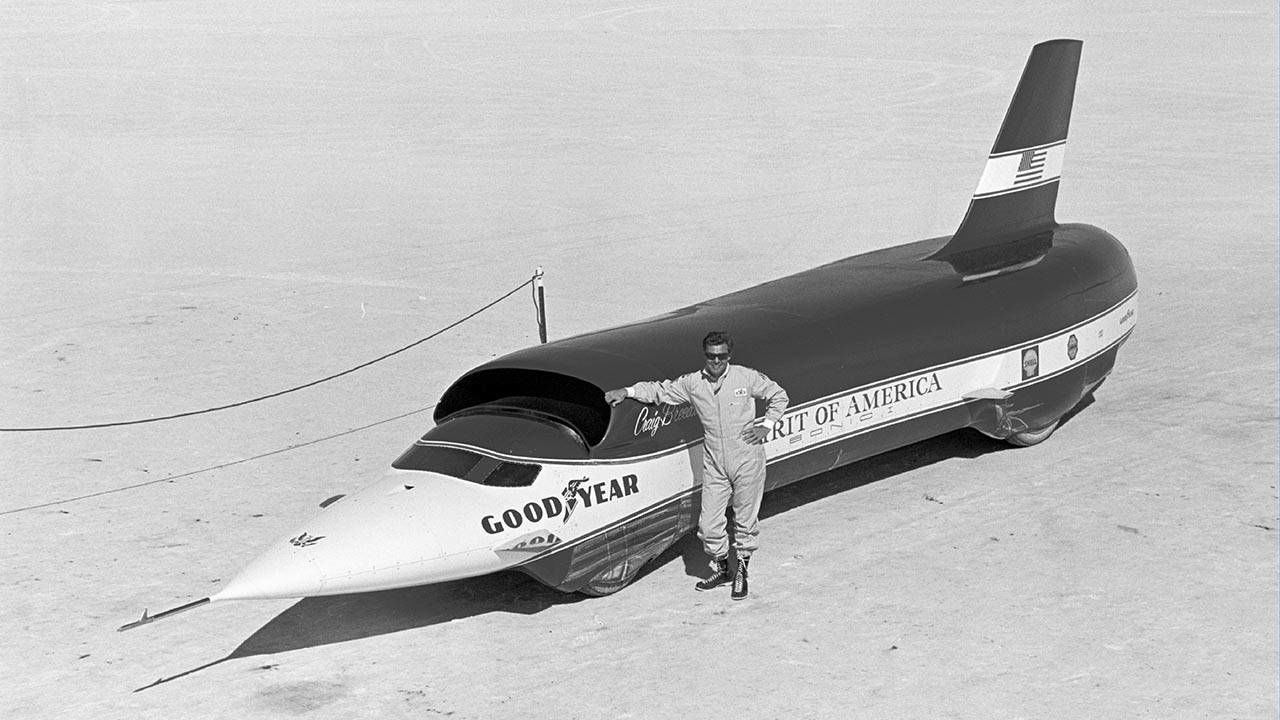 In 1965, Breedlove came back to Bonneville with car that looked even more like the product of a NASA program , the Spirit of America Sonic I, powered by a J79 jet engine. Breedlove clicked off a run of 555 mph to retake the record.

In almost a repeat of 1964, Art Arfons climbed back into the Green Monster to make another record attempt at Bonneville. During his second pass, a tire shred, but he managed to maintain control and set a new record of 576 mph. 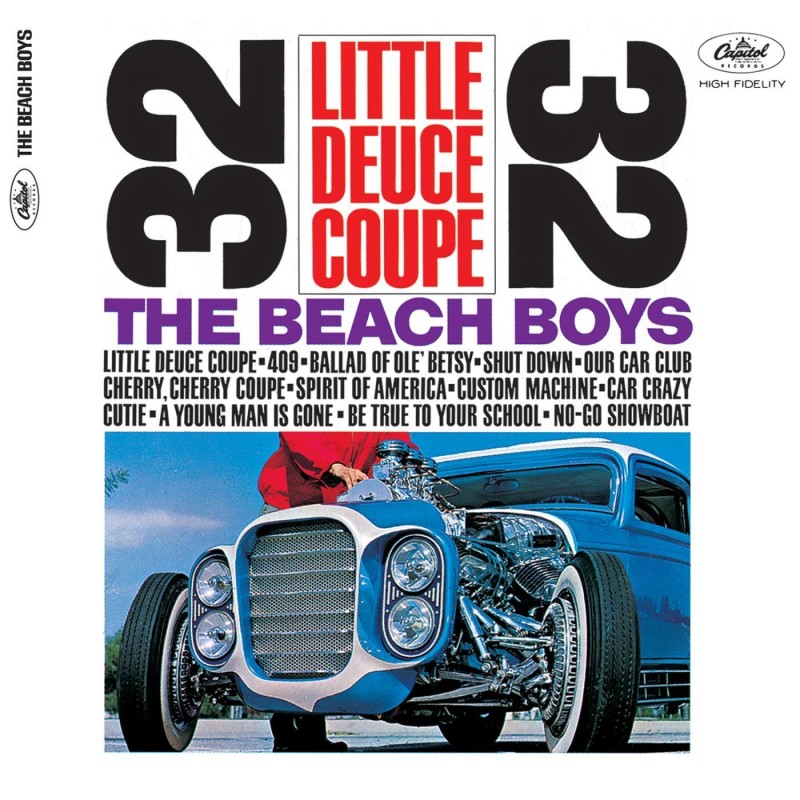 Then just a few days later, Breedlove again reset the record at 600.601 mph, a nearly 200 mph gain in just a few years, for which he was immortalized in the Beach Boys song “Spirit of America” as “a daring young man played a dangerous game” from the Little Deuce Coupe album.

In 1966 Art Arfons returned to the salt and while traveling 610 mph a wheel bearing seized and the Green Monster crashed. He never again made an attempt at the LSR. Art passed away in 2007, Walt in 2013. 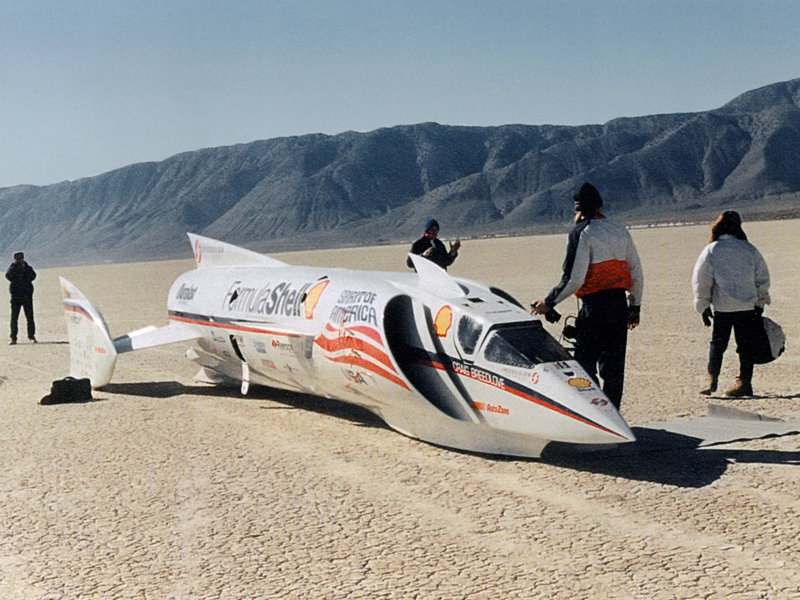 In 1992 Breedlove started a new effort to win back the LSR with the Spirit of America Shell LSRV, but it ran only 676 when Andy Green took the LSR at 713 mph and the project was abandoned. 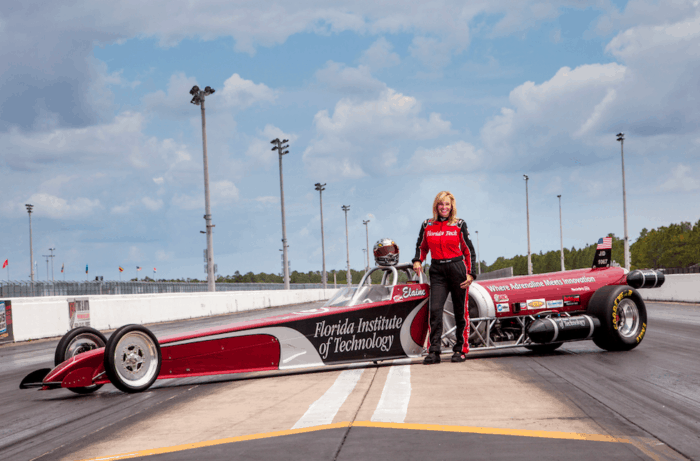 Next up, we’ve got this incredible Florida Tech jet dragster, which was built in collaboration with the legendary Larsen Motorsports – who are without doubt one of the most foremost authorities on jet engine race car building. The amazing turbine car is expertly piloted by the wonderful Elaine Larsen who has won a series of International Hot Rod Association world championship victory. Hopefully we’ll be seeing more of this car in the future, with it beating world records and besting top fuel dragsters in races too! 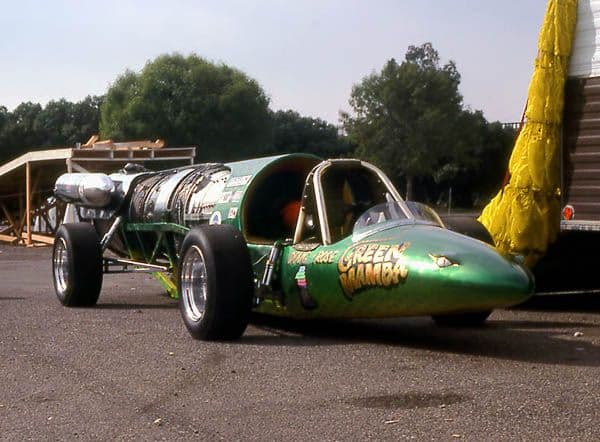 Finally, we’ve got the legendary Green Mamba that was built and piloted by the late and great Doug Rose. The Green Mamba was first built in 1968 using the engine from a surplus jet fighter. Doug built the car after losing his legs in an accident, and focused on building a machine that was capable of hitting speeds in excess of 300 mph. He was so successful that he managed to tour with his turbine powered car and impress audiences for decades, until the car was stolen in 2006. Luckily, Rose built another model and took it back on the circuit. Unfortunately, Doug Rose died whilst performing an exhibition lap at an event at the Norway Speedway in Michigan in August of 2018. The Green Mamba will forever go down in history as one of the most celebrated jet engine car models ever built!


The Best Of 2021 Porsche
10 Best Cheap Used Sports Cars And 8 To Avoid!
2022 Hyundai Ioniq 5: A Sharp New EV Contender
10 Best Car Museums For Gearheads
Factory-Lifted: 2022 Subaru Outback Wilderness
10 Of The Weirdest Cars That Could Only Be From The '50s