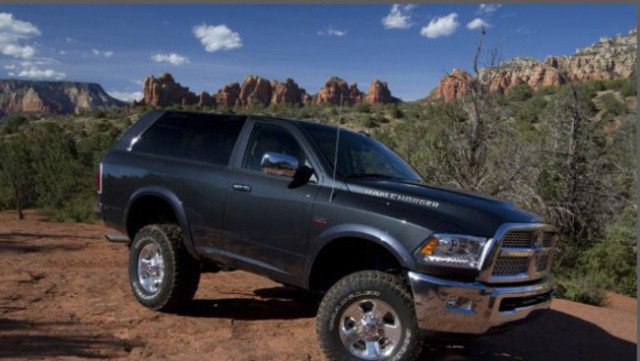 It seems that the rebooted format not only works for Hollywood but Detroit as well. Ford has since announced that they are rebooting the 2020 Ford Bronco in order to try and steal some of the Jeep Wrangler’s market dominance. Since the internet blew up with a resounding approval for a reboot of the Bronco has led other manufacturers such as Dodge/Ram to not only start the process of gathering market data but delivering functional prototypes to events such as the annual Jeep Safaris.

RamCharger To Have 4-Doors Only?

Current and formal 1st/2nd Gen RamCharger owners have made it abundantly clear that they are fans of their vehicles. Dodge/Ram have taken notice how the used market for 4×4’s is appreciating for larger straight axle 4x4s such as the 1st/2nd Gen RamCharger and K5 Blazer. Although this will technically be the 4th Gen RamCharger for production, some might discourage a 4-door platform. It seems that the main focus will be on 4-door as two door sales of the Jeep Wrangler have slowed since the introduction of the Unlimited JK series.

For the production terms, they are starting with a single-cab/short bed Ram 1500 chassis with an interior similar to in specs to the QuadCab setup. Powerplants will vary from the from a possible Turbo six-cylinder Pentastar configuration to the possibility of an SRT edition Ramcharger. Hellcat and Ramcharger have not been seen together as a possible marriage. There, however, has been talks of a complete overhaul of the Rebel marque so that it delivers more aggressive features. From front fascia and fender flares to the possibility of supercharged “Apache” 6.4L and talk of proprietary suspension setups from a third party such as King Suspensions or Radflo.

Will The RamCharger Be Off-Road Capable?

The ground clearance comes in at 14.5” with stock 33” tires with the drivable prototype. The shortened wheelbase will help the RamCharger achieve approach angles similar to that of the 1st and 2nd generation RamChargers. There will likely be a mass of aftermarket backing as the RamCharger looks to share a majority of parts with the Ram 1500. No word on locking diffs front or rear or axle sizes although the prototype had two e-lockers with 35mm front axles and a 38mm rear axle.

It is likely that the Ramcharger will be released several months after the Ram’s revisions take place. Although we do not have any verified price figures at the moment, sources say that the RamCharger will start at $36,495 for the Sport 4×4 model.