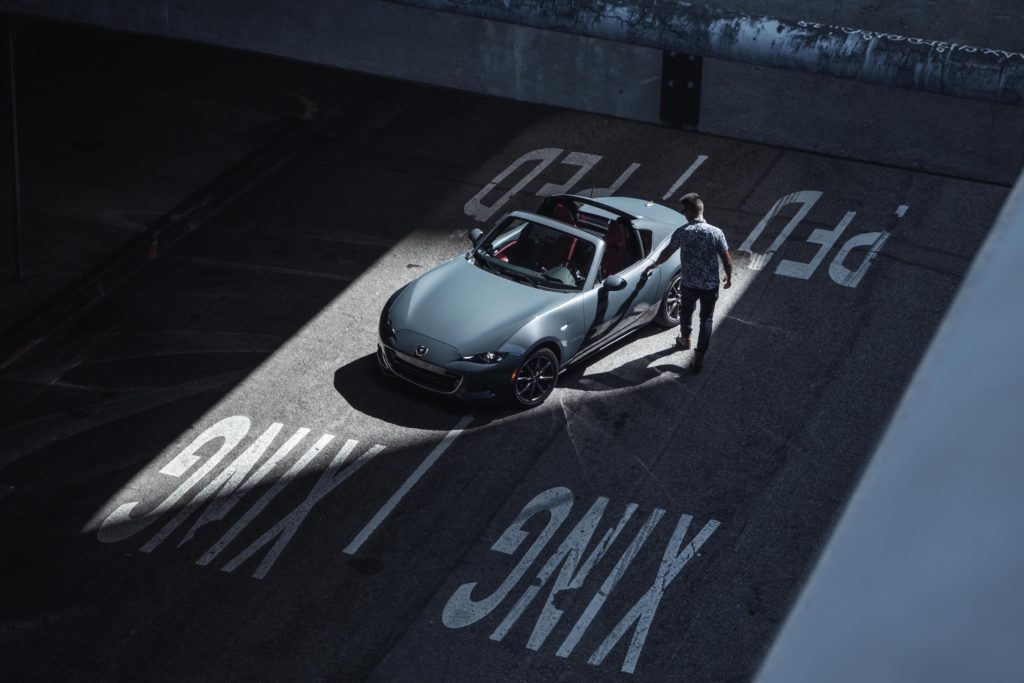 Drop-tops have always been dream cars for many car enthusiasts. Whether young or old, precious few people can honestly say they’ve never fantasized about driving one towards the sunset with wind messing their unusually perfect hair. Their practicality, or rather lack of, as a daily driver is what usually deters people from actually buying a cabrio. That’s one of the main reasons why their numbers have dwindled in recent years. There are still a few 2021 convertibles to choose from, however, and we’ll take a look at the best below.

Most modern-day open-tops are 2-door, 2-seat sports cars or exorbitantly expensive supercars, but the truth is, there were all kinds of convertibles over the decades. A 4-door convertible wasn’t as uncommon a few decades ago as it is right now, and neither were convertible SUVs, which are apparently becoming a thing once again.

Whether they’re 2-seat, 2+2-seat, or 4-seat convertibles, here are some of the best drop-tops available at the moment. Note that we’ve excluded full-fledged supercars from the list, so us mear mortals might actually be able to put one of these convertibles in our own driveway. 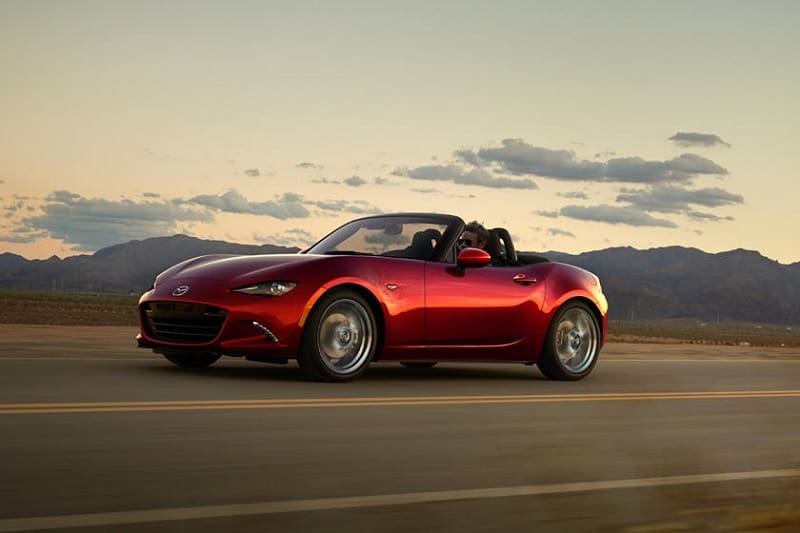 Most car enthusiasts will agree that there can be no “best convertibles” discussion at all without an affordable Japanese compact 2-seater, and at the moment, the best of them is arguably the Miata. Although the fourth-gen Miata is nearing its end, recent facelift and powertrain upgrades have successfully prolonged its life and put it into contention for the best convertible 2021 will have to offer.

As always, the MX-5 isn’t only one of the most exciting lightweight 2-seaters to drive, but also one of the sharpest-looking ones. Mazda’s design team has always been atop of its class and they’ve only gotten better as years progressed. Again, most car aficionados will agree that Mazda’s design has been one of the most authentic and inspiring ones in recent years.

Available in both the conventional roadster convertible and hard-top RF forms, the Miata starts from just under $26,000 if ordered with a manual gearbox, and tops out at around $32,000 with an automatic. The RF version, on the other hand, costs between $32,500 and $34,500, and skips the entry-level trim altogether.

Miata’s heartbeat comes from a 2.0L Skyactiv 4-cylinder rated at 181 horsepower and 151 pound-feet of torque. As already mentioned, it can be paired both with a 6-speed manual or a 6-speed auto, but they both divert convertible’s power to the rear regardless of other choices.

Weighing as little as 2,332 pounds (roadster with a manual), the MX-5 Miata represents one of the best-handling convertibles money can buy nowadays, and if nothing unforeseeable happens, it’ll likely remain the king of affordable handlers for quite a while.

The 2021 Corvette Stingray Convertible starts at $67,495. This retractable-hardtop mid-engine sports car turns heads wherever it goes.

We spent a week with this 495 hp attention grabber and can attest to how amazing a driver’s car it really is. The top does take a little longer than we might like to stow and deploy, but those few seconds are a small price to pay for push-button open-top motoring. The balance, RWD performance, and truly impressive cockpit are what really stood out to us.

There are VERY few cars on the market that can hold their own with this car when you factor in the price tag. The 2021 Corvette Stingray Convertible could be the best value in convertibles this year. 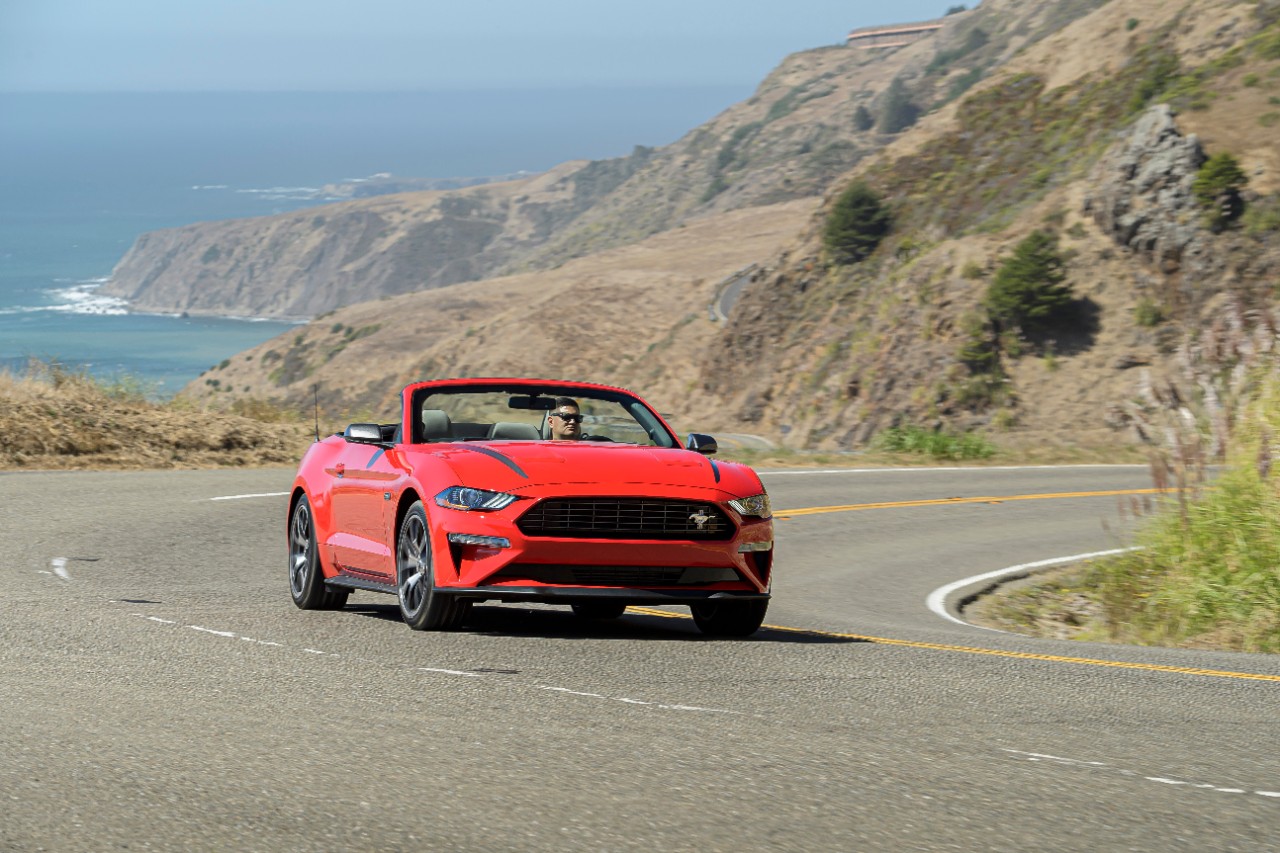 The Ford Mustang has and always will be an impressive everyday sports car value. The 2021 Mustang is more refined than ever and showcases all the latest Ford comfort and driver assistance tech.

There is a range of Mustang convertibles on offer, with the base 2.3L turbocharged V6 EcoBoost Convertible starting at $32,655 and putting out 310 hp through a 6-speed manual trans. The top-spec Mustang GT Premium Convertible starts at $45,620 and gets you a 5L V8 with a 6-speed rev-matching manual transmission as standard. Of course, an automatic trans is offered across the range. 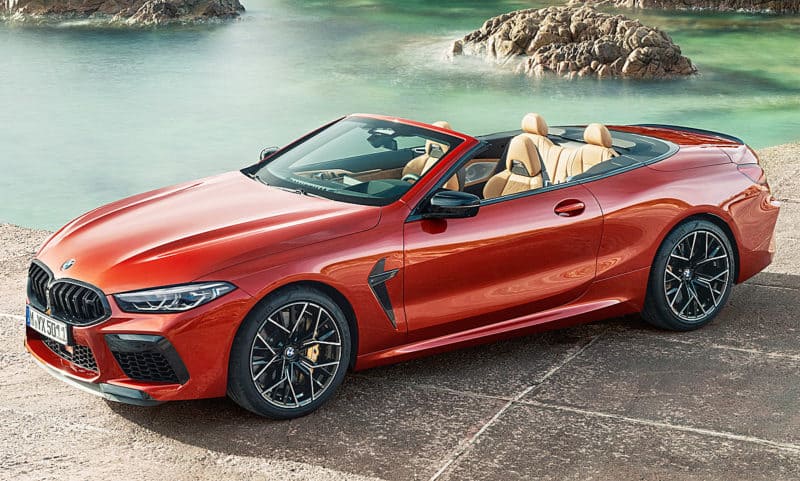 The new flagship of the BMW range replaces the outgoing 6 Series lineup of coupes and convertibles. This isn’t the first time the Bavarian automaker is using the 8 Series moniker, but it’s been a while since their last eights ran the roads. Introduced as 2019-year models (20 years after the original), the 8 Series has expanded rapidly. Their latest expansion is the iconic M performance edition.

Making its debut in late 2019 as a 2020-year model, the BMW M8 reveals all of its cards straight from the get-go. Aside from convertible, prospective buyers will get an option to select both the 2-door coupe and a 4-door gran coupe. What’s more, the M8 is already available in both the regular and hardcore Competition forms. Aside from providing a slightly higher power output, the latter also boasts a stiffer suspension, sport exhaust, unique details including wheels, and a special “Track” drive mode.

Regardless of a chosen model, all M8’s are powered by the same 4.4L twin-turbo V8 backed by an 8-speed ZF automatic gearbox. Regular M8 convertibles produce as much as 600 hp and 553 lb.-ft. of torque, while the Competition package adds another 17 ponies. All-wheel drive is standard across the range but the M8 still features a rear-wheel-drive mode which is perfect for an occasional drift.

Even the regular M8 convertible is more than capable of sprinting to 60 mph from a standstill in 3.2 seconds, but the Competition models will slash one additional tenth of a second off that time. Needless to say, the 2021 BMW M8 convertible also boasts plenty of stopping power thanks to its large brakes with adjustable brake pedal feel. 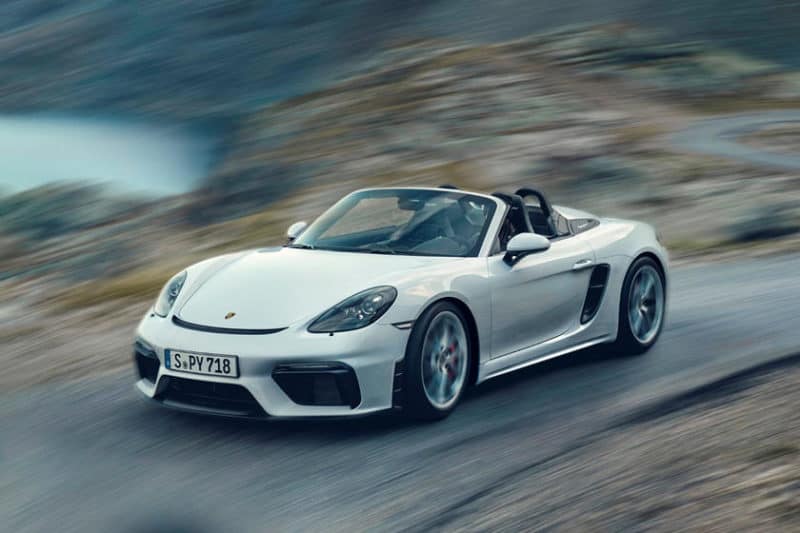 The Porsche 718 Boxster is one of the best convertibles 2021 has to offer, and recent improvements have made it even more appealing to a wider range of buyers. Yes, I’m talking about the reappearance of the naturally aspirated 6-cylinder engine and the introduction of the new Touring package.

The entry-level Porsche Boxster convertible starts at $62,000, which makes it arguably one of the best bargains in a luxury sports car segment considering its impeccable driving dynamics and hood badge. The Boxster S, on the other hand, requires north of $74,000, while the GTS models start from under $88,900. Finally, the recently introduced Porsche 718 Spyder costs a whopping $97,300 and conflicts with the 911’s entry-level prices.

There are currently three different engines in four states of tunes which should satisfy even the most hardcore track fanatics. The base Boxster convertible starts with a 300 hp 2.0L turbo-four engine, while the Boxster S and GTS use a 2.5L turbocharged boxer flat-four engine worthy of 350 and 365 hp respectively. The latest addition to the lineup produces 414 hp and 309 lb.-ft. of torque which is enough to propel the 3,200-pounder to 60 mph in 4.2 seconds.

The engine behind the most powerful of entry-level Porsche sports cars is a 4.0L naturally aspirated flat-six paired exclusively with a 6-speed manual transmission. The remainder of the range gets a choice between a manual and a PDK 7-speed automatic. 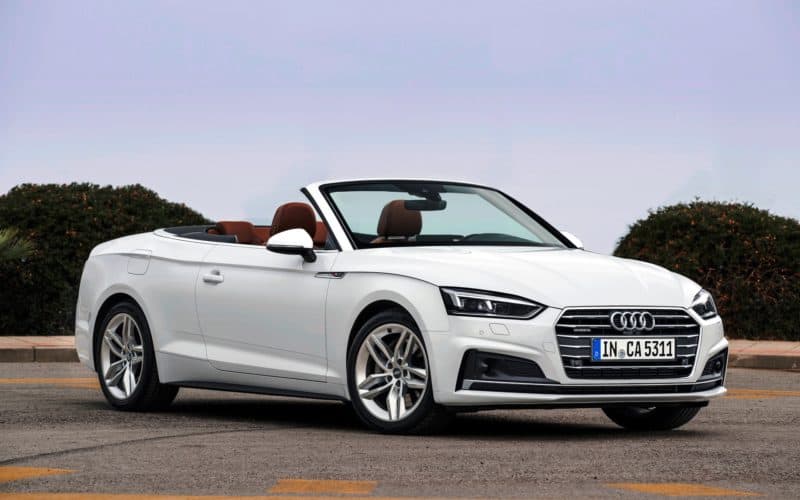 The A5 is Audi’s mid-range convertible that slots way below the exorbitantly priced R8 in terms of both the performance and price, but offers much more space than the similarly priced TT roadster.

The entire 2021 A5, S5, and RS 5 lineup will receive treatment similar to that in the A4 and S4 sedans which were already refreshed for MY 2020. This means a new frontal fascia with different headlights, bumper, and grille, a slightly revised rear end, and a subtly revised interior with the next-gen MMI infotainment system and a tablet-like 10.1-inch touchscreen display.

Prices for the entry-level Audi A5 convertible start from $50,400. Audi’s mid-range performance S5 drop-top will set you back at least $60,600. However, the performance-topping RS5 is only available as a 4-door sportback and that’s unlikely to change anytime soon.

In line with the A4/S4 facelift, the new A5 and S5 will also receive a mild-hybrid assist. This was already incorporated in overseas markets where the compact executive sedan’s range features a total of six available engine choices – three of which are offered with electric assist.

The 2021 Audi A5 convertible should retain its 2.0L turbocharged 4-cylinder with 248 hp as a base engine, while the S5 convertible should carry over with a significantly more powerful 349 hp 3.0L twin-turbo V6. In between, the Germans are expected to offer a 2.0L engine with more grunt thanks to a 48-volt electric assist. Regardless of a chosen engine, all A5 and S5 convertibles will be paired with automatics: A5’s with a 7-speed, and S5’s with an 8-speed. 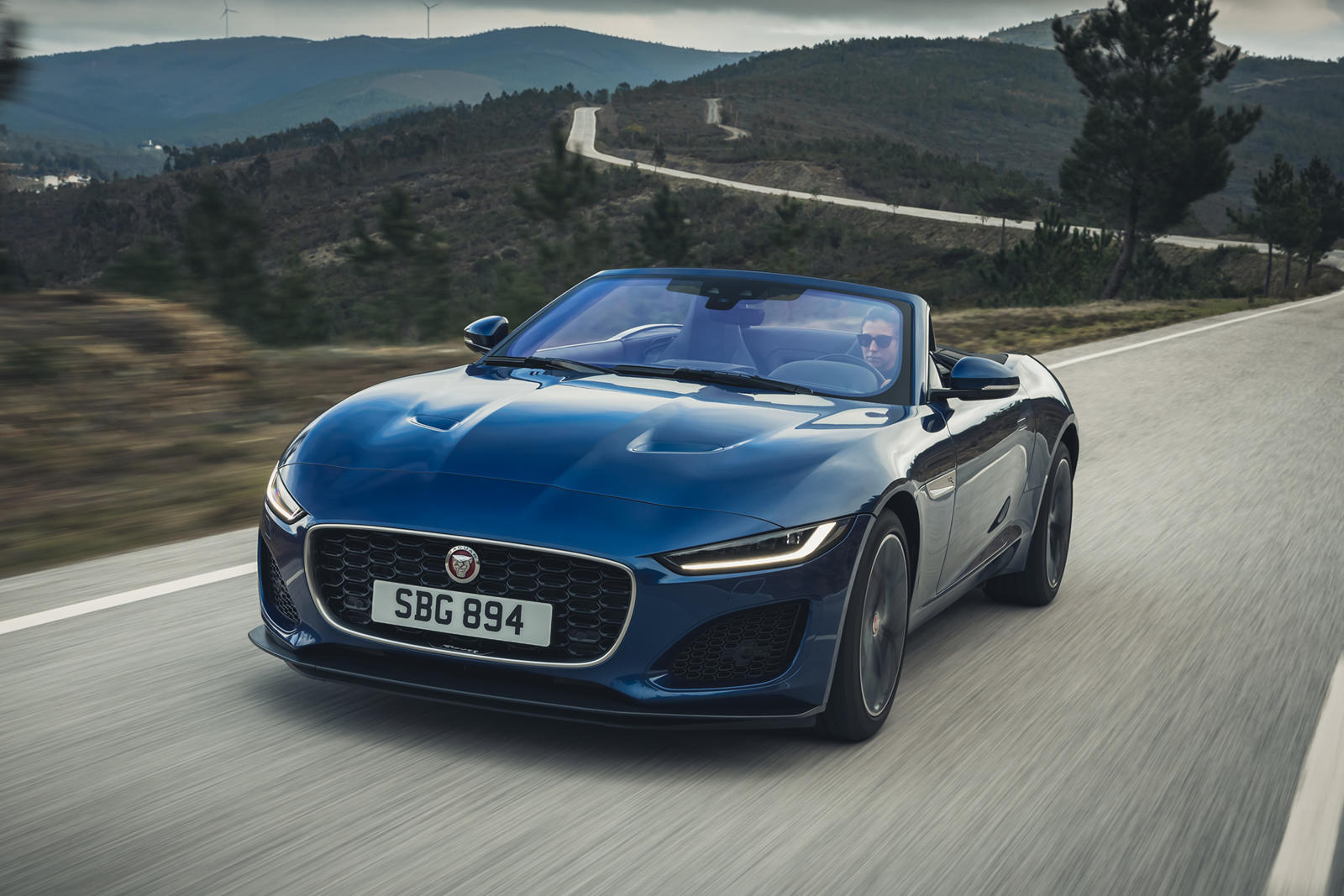 Basically unchanged since 2013, the F Type finally gets a major makeover for 2021. The second-generation of Jaguar’s sports car is just a bit more refined and sporty. The new F Type convertible will boast a number of differences compared to the outgoing models. Completely revised front and rear fascias are just a beginning, and an overhauled interior only complements them. The new model is also lighter and thus more agile, but don’t expect miracles in that department.

The new Jaguar F Type convertible retains its general price points. This means $65,000 or thereabouts for the base, $106,000 starting price for the R model, and anything in between for the remainder of the F Type open-top range.

The 2021 Jaguar F Type’s powertrain lineup consists of a base 296 hp 2.0L turbocharged 4-cylinder and a 3.0L supercharged V6 putting out 380 hp. All F Types will be tied to the 8-speed automatic, as the 6-speed manual has been phased out. All-wheel drive will be available with all but the base engine which remains in a rear-wheel-drive configuration. 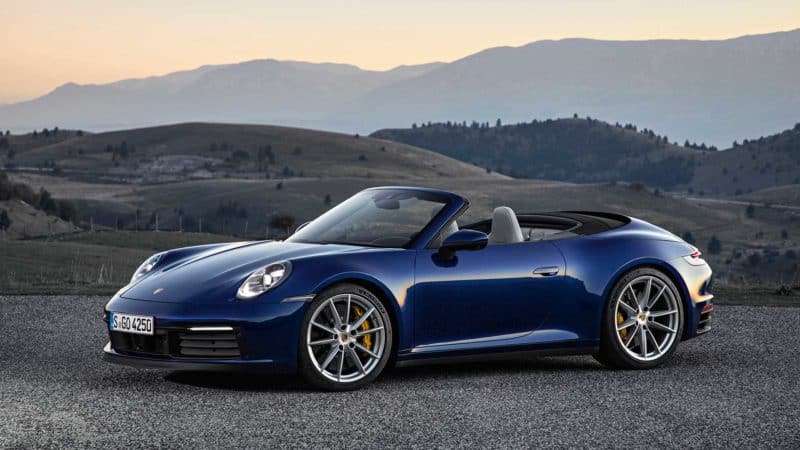 The powertrain behind the base Carrera 911’s is a 3.0L twin-turbo flat-six which generates 379 ponies in the base, or 443 horses in the Carrera S and 4S models. The Porsche 911 Turbo models made 572 hp and 640 hp (in the 911 Turbo S). Every single 992-generation Porsche 911 uses an 8-speed PDK automatic transmission, while both the rear and all-wheel-drive configurations are available depending on a model of your choice.