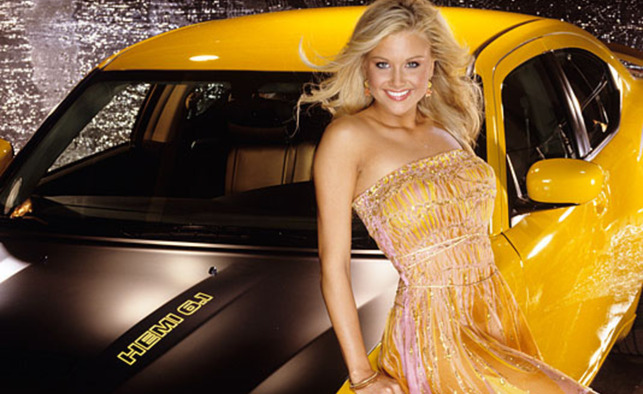 Each year Playboy awards its Playmate of the Year a car as part of her winnings. The first few years these Playboy cars were all painted pink, but that changed after 12 years, and now the cars or motorcycles remain in their OEM colors. Of those awarded over the last 50 years, some are now valuable classics and others are (close to) worthless junk. Let’s take a peek underneath and see which Playboy motor car souvenirs have risen most in value and which should just be hauled away and crushed into bunny shaped cubes. Here are some of the most “memorable” of Playboy’s Playmate of the Year cars.

1965 Playmate of the Year Donna Michelle 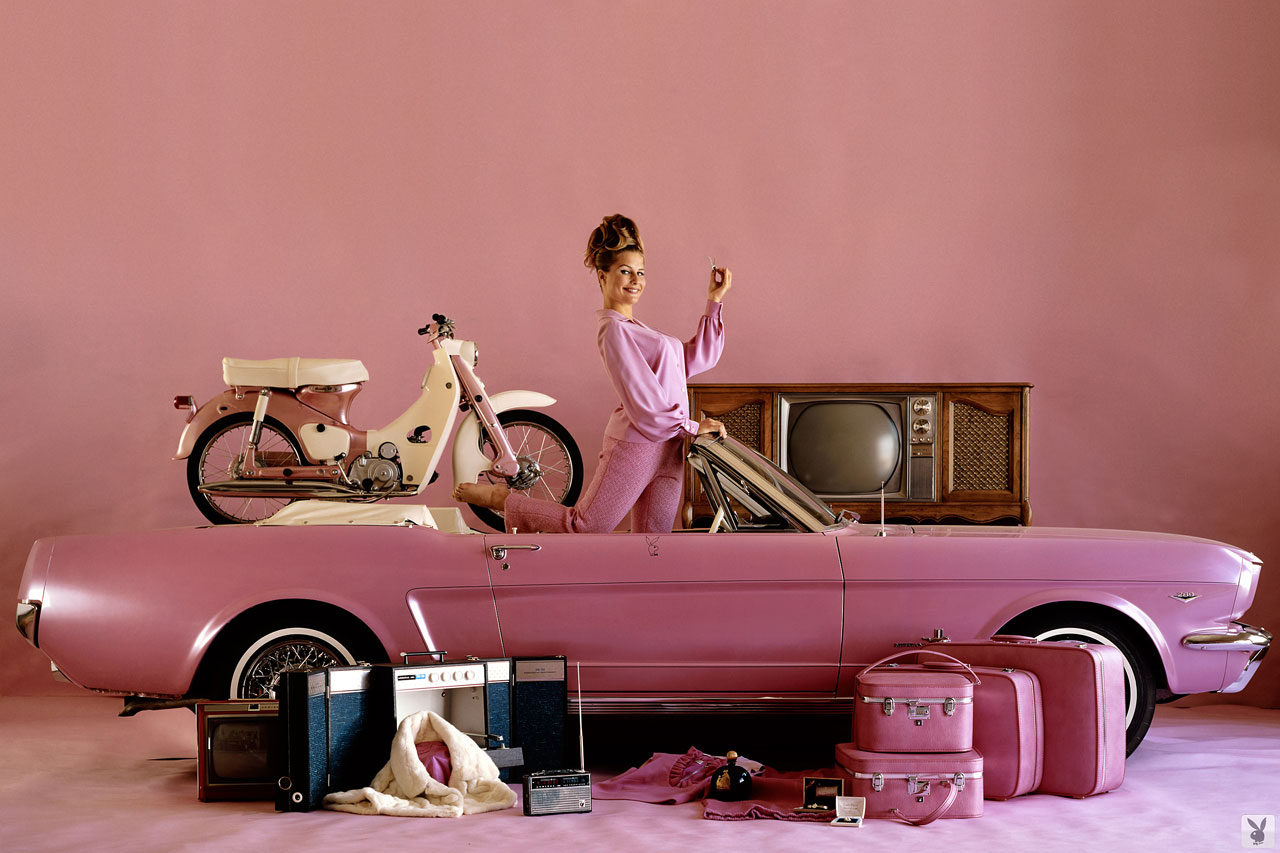 Michelle was the first Playmate to receive a motor car as a gift from the Playboy, a pink 1964.5 Mustang. Today, a first year Mustang convertible with 289 V8 in great shape is one of the most sought after classic cars and should pull in at least $50K.

1972 Playmate of the Year Liv Lindeland

Liv had the amazing good fortune to have won the crown in 1972, as the prize  was a new DeTomaso Pantera. Designed and built in Italy with a mid-engined Ford 351 V-8, Panteras were then sold through Ford dealers. Without the provenance of Liv’s ownership, but in excellent condition, 1972 Panteras run about $80,000 today. Not a bad Playboy car, eh? 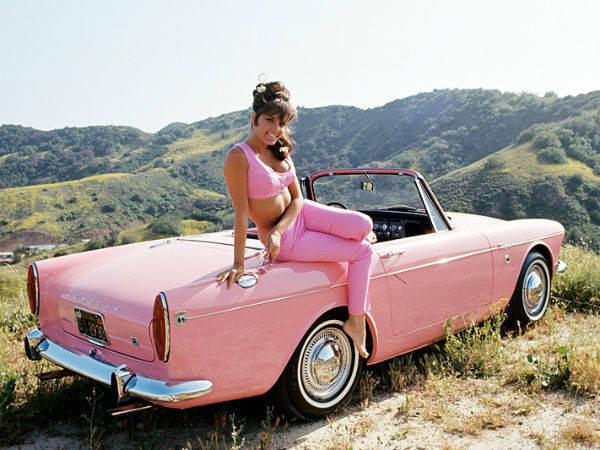 The second Playmate to win a Playboy car with her title, Ms. Collins also did quite well for herself. While the car she won looks like a sleepy English roadster from the Rootes Group car company, it actually has a Ford 289 V-8 under the hood. The Sunbeam Tiger was sold for just three years and in relatively small numbers, just over 7000 in total. Because of its performance and its rarity, a non-Playboy, non-pink Tiger can sell for $110,000 or more. 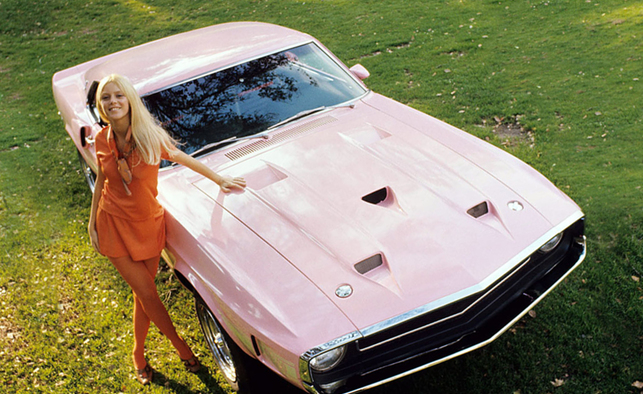 The Not So Good

Unfortunately not all Playmates of the Year were so lucky as to be awarded cars that quickly became modern classics. Let’s face it, there were some dogs in the bunch. No, not the women. The cars they were given. Some of these vehicles really aren’t worth the promotion from Playmate of the Month… Do you agree? 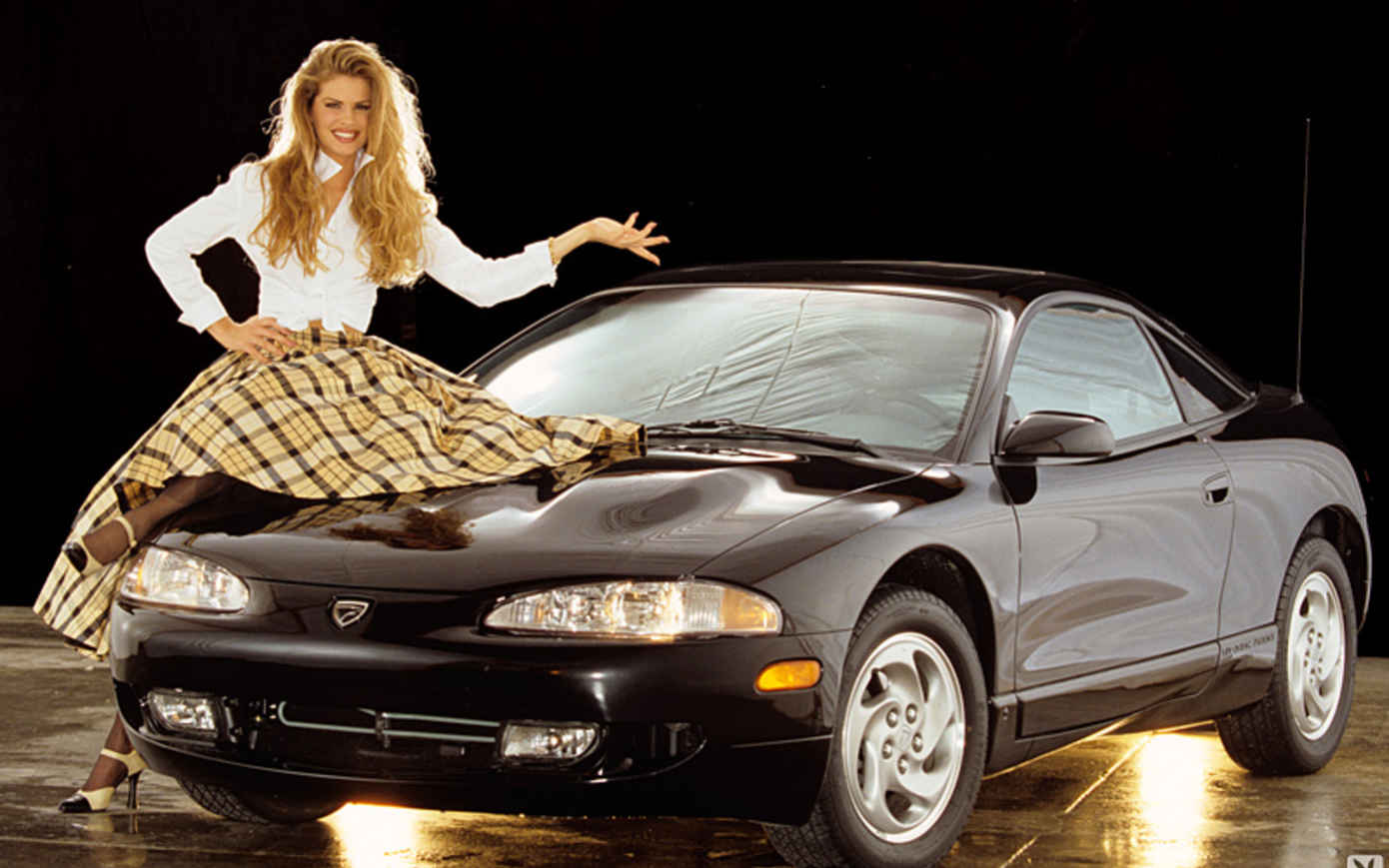 Poor Julie. While the Playmate the year after her takes home a Jeep Wrangler and the 1997 winners drives home a Porsche, Ms. Cialini gets a rebadged Mitsubishi sold as a 1995 Eagle Talon TSI. If she went to trade in the car today, maybe signed a few autographs, and took a selfie with the salesperson, she might get $1000 toward a trade. There’s no justice in the world, is there? Then again, getting a “less-good” car for free isn’t that bad in the grand scheme of things, compared to a world war or something. 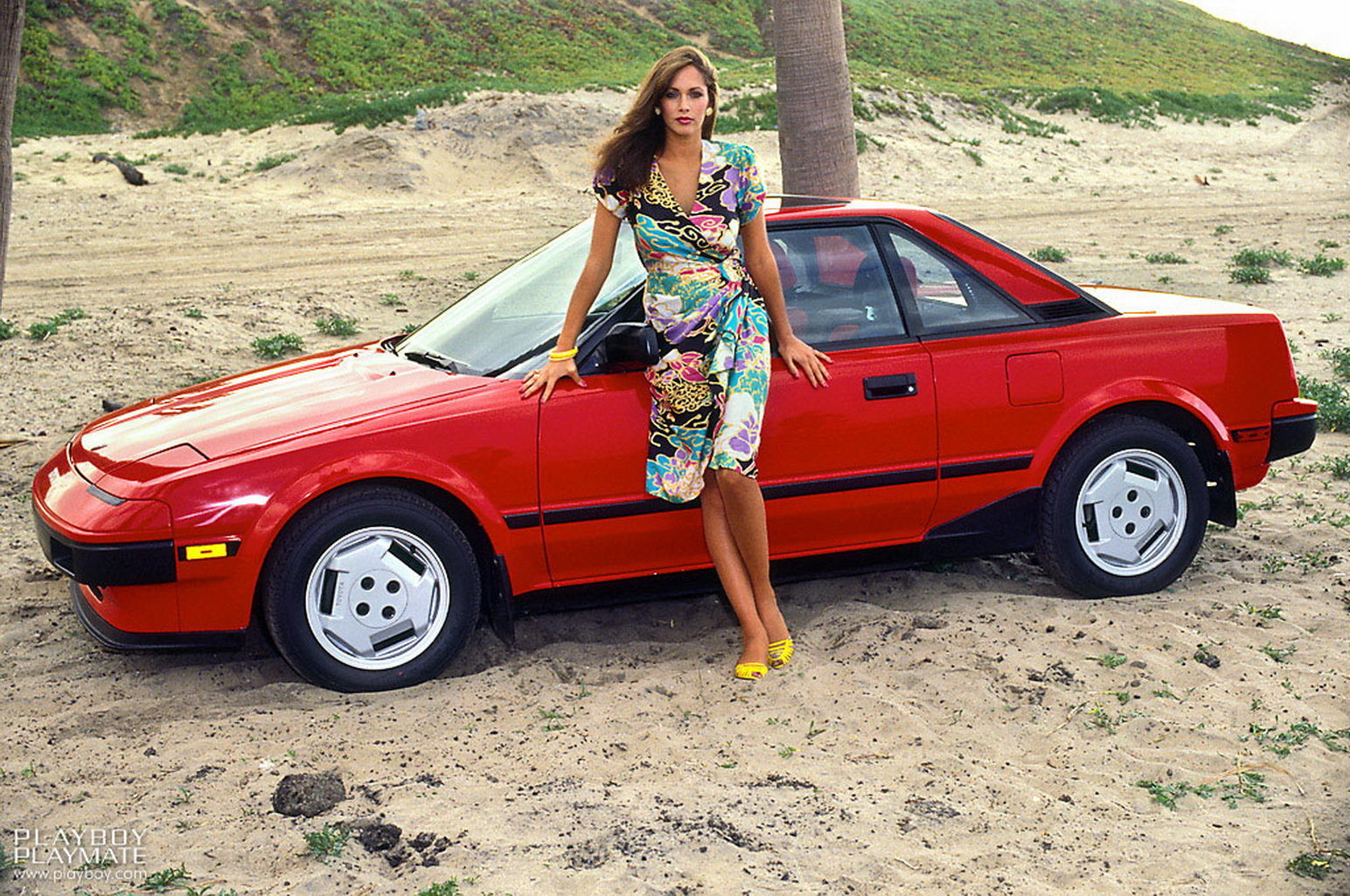 I would say that Karen has bad timing. The Playmates of the Year in both 1984 and 1986 received Jaguars. Instead Ms. Velez takes home the only Toyota ever awarded to a Playmate of the Year (if you ask me, she doesn’t look very happy about it). If she’d held onto the car, kept it spotless, she might get $1200 in a trade-in – making it one of the most unfortunate Playboy cars ever gifted. 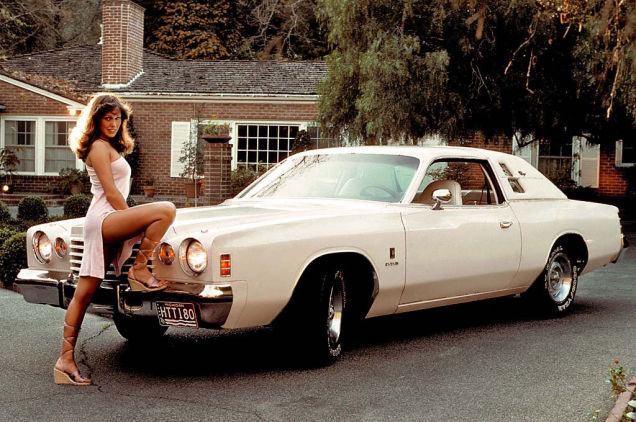 The car awarded to the future Mrs. Jimmy Connors was a 1977 Dodge Charger. It’s tough to estimates its value as available engines ran from the slant 6 to a 440 big block, but could be worth between $500 to $5000 to a collector. And if there’s anyone who can argue for a higher price its Jimmy Connor. 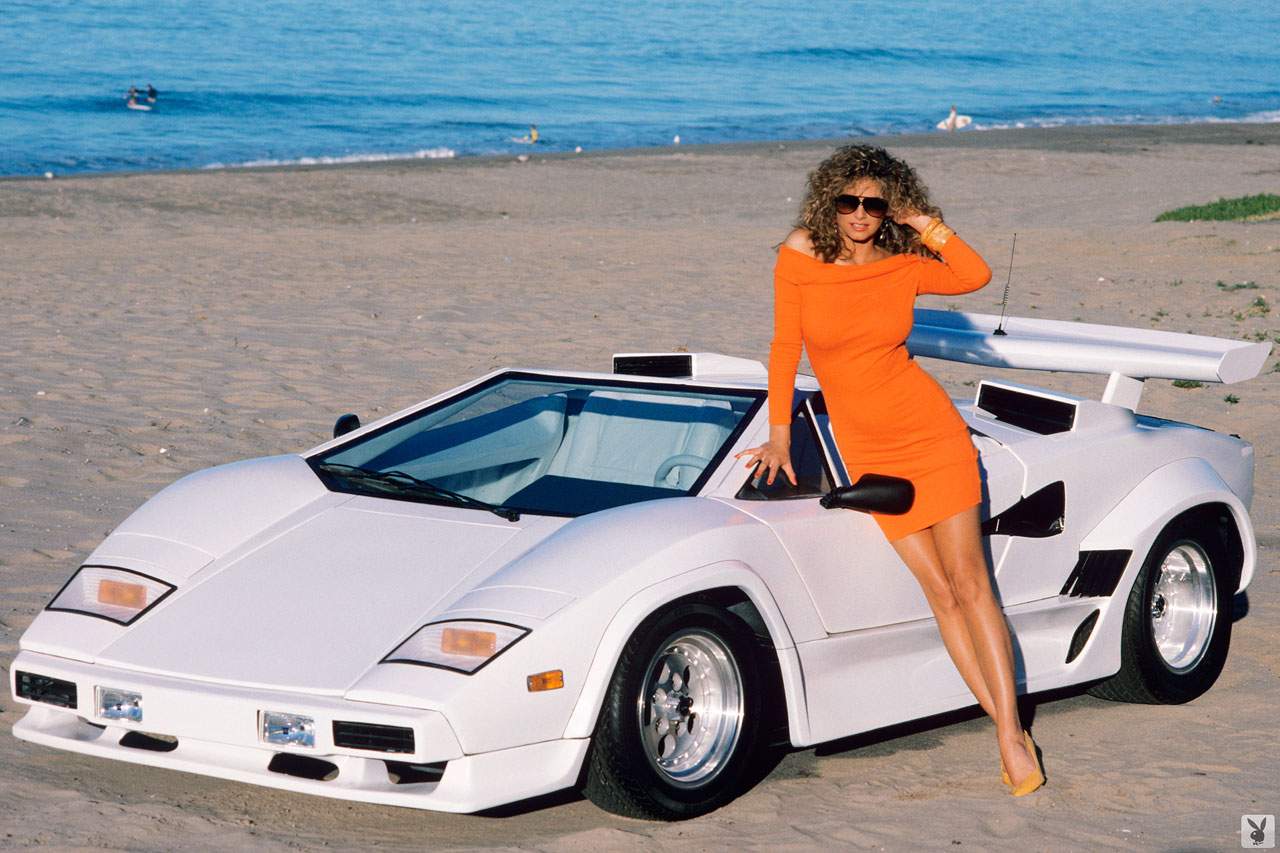 Ms. Allen was the recipient of what must be the oddest vehicle ever awarded to a Playmate of the Year. While at first glance it might appear to be a genuine Lamborghini, let your eyes stop for a second and you’ll notice all the proportions (of the car) are wrong. So Ms. Allen was awarded a replicar, produced by a company called Exotic Dream Machines (a car company that is no longer in business, surprised?). As best as I’ve been able to gather it’s a tube frame chassis with a Mustang II front end, Chevy small block, Porsche trans and suspension. While some of these cars when well-maintained might fetch $20k, they require constant maintenance and repair or they’re nearly valueless.

Playboy’s Playmate of the year for 2018, Nina Daniele, the first playmate to win the award since Playboy founder Hugh Hefner died in 2017, hasn’t received her car yet. And even when she does we’re reluctant to post it. It gives you all a good excuse to search for “Nina Daniele” online, doesn’t it?

What About Hugh Hefner & His Vehicle Collection?

Hugh Hefner was a cultural icon, but while he’s best remembered for his Playboy empire, he was also a huge auto enthusiast. While we’ll never forget the playmates, the Playboy Mansion, or his impeccable sense of style and beauty, cars were very much a huge interest of his.

He’s been called a sexist and a pervert, but across more than six decades, he never gave up on his goal. Ultimately, he helped revolutionize human sexuality and was an outspoken advocate for social justice and equality. He became an outspoken defender of civil rights, freedom of speech, gay rights and sexual freedom.

A man with as much influence as Hef was bound to have owned and driven some interesting cars, and today we’ve gathered a list of five interesting vehicles the Playboy founder enjoyed during his lifetime.

Launching Playboy with $600 in his pocket in 1953, he initiated a sexual revolution that would affect society at large. While at the time his ideals were more controversial than revolutionary (though really, what’s the difference?), he struck gold with Playboy and the “entertainment for men” business model. So he did what any reasonable young man would do with newly acquired riches – he bought a Cadillac convertible. 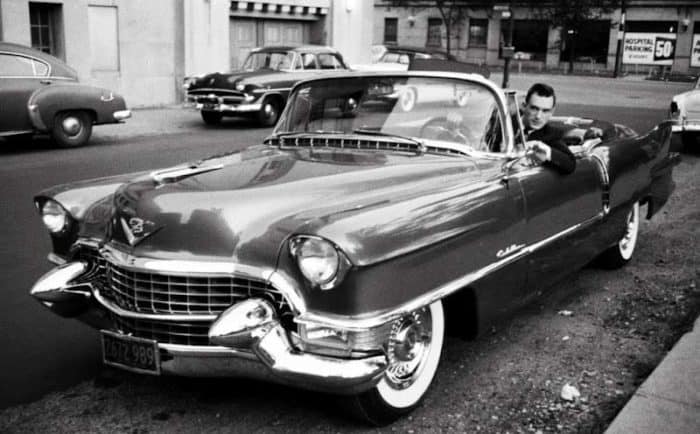 This was his first proper car – the 1955 Cadillac Series 62 convertible. It was a nice car which Hugh Hefner probably bought because Elvis Presley drove a similar one as well.

Designed by Harley Earl, the 1955 Series 62 convertible introduced a number of luxuries everyone would appreciate.

It had custom interior trimmings with Cadillac crests, automatic windshield washers, power steering, power windows, auto headlight dimming and more. Bear in mind, this was in 1955, so this was pretty advanced technology for a car.

Although powered by a 365Ci V8, Hefner’s Cadillac Series 62 Convertible was not what we would call fast. This barge on wheels took more than 17 seconds to get to 60 mph from a standstill – not exactly leaving his competitors in the dust.

The exemplary and highly-prized 1959 300SL was undoubtedly one of the most astounding cars Hefner owned. It was a convertible he loved very much, and even spoke about on Twitter in 2010 in response to a fan question: 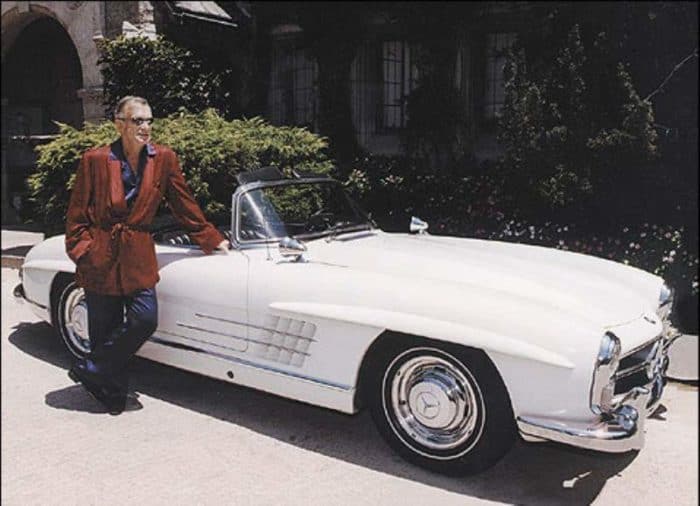 Now, owning a car like this is like owning a Bugatti Veyron today. It was, by many, the first proper supercar in the world capable of achieving 140+ mph on a straight road. This car was also very important because it featured the first direct fuel injection system. This system was developed by Bosch and was previously used for a German WWII Fighter plane.

Nevertheless, in one of his interviews with the CNN, Hefner mentioned his 300SL again:

“I bought the first Playboy mansion on Chicago’s Gold Coast, and I opened the first Playboy Club. At the end of 1959, I came out from behind the desk and started living a life. It was something that I thought would be fun that would also work as a marketing ploy. That’s when I started smoking the pipe and driving a 300SL Mercedes-Benz. Before long, I’d become world famous.” 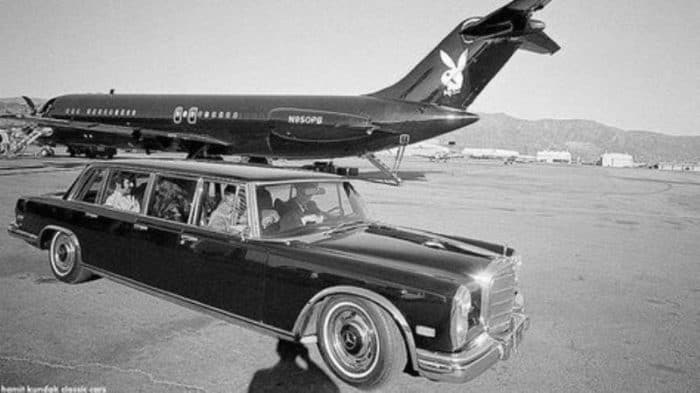 Hef, like many of the abundantly wealthy of the time, placed a special order with Mercedes Benz to build on of these special limousine beauties. Built by hand and equipped with all possible luxury amenities of the time, these two machines are probably the pinnacle of the luxurious lifestyle of the Seventies. Hugh Hefner had two of them but other notable owners included Coco Chanel, John Lennon, Jack Nicholson, Aristotle Onassis, and Elvis Presley. Heads of states had a thing for it as well – the 600 Pullman was driven by Idi Amin, Leonid Brezhnev, Fidel Castro, Nicolae Ceausescu, Emperor Hirohito, Ferdinand Marcos, Josip Broz-Tito, and Mao Zedong. 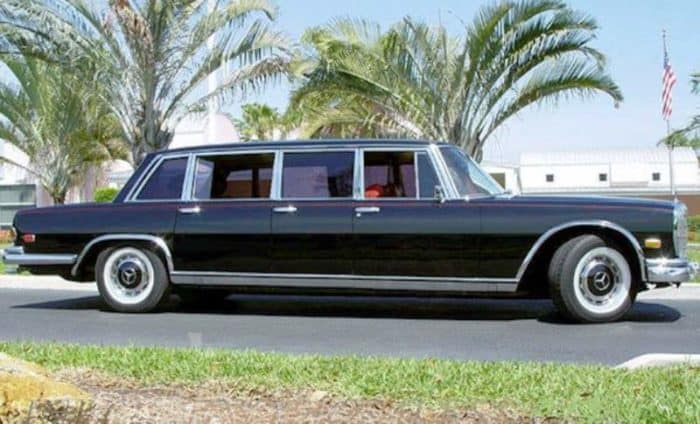 Hef had a thing for Bimmers. One in particular – the 1972 BMW 3.0 CS E9. This car, more or less, defined all future BMWs to come. It had that sharp, shark-looking styling. The spruced-up special racing version, which dominated the European tracks, was nicknamed the “Batmobile” due to its looks. As expected, the car was a rock star. Celebrities loved it, and apart from Hugh Hefner, who had his in 1972, notable owners included Sir Sean Connery and David Crosby. 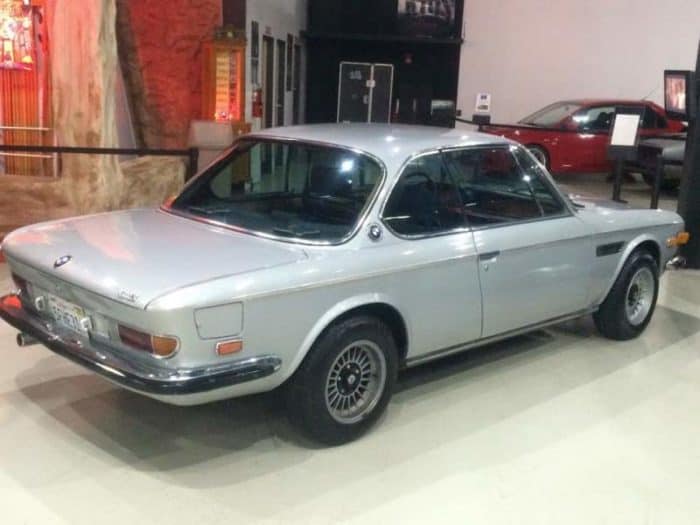 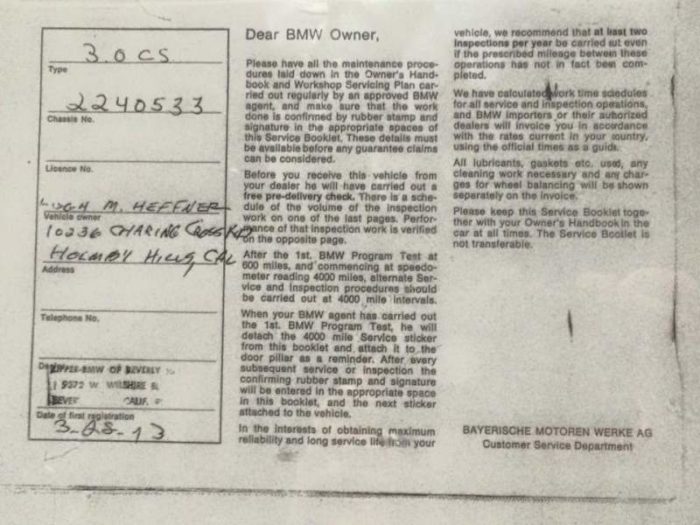 The car featured a three-liter straight six with twin carburetors and a maximum output of 180 hp.

Life would not be complete as the head of a semi-pornographic empire without a proper limousine. Not just any kind, mind you, but a Hummer H2 Limousine. Hefner probably ordered it the moment Hummer announced it would be making one. Hefner and some of the playmates appeared in the Playboy Hummer Limousine at notable events throughout the 2000s. 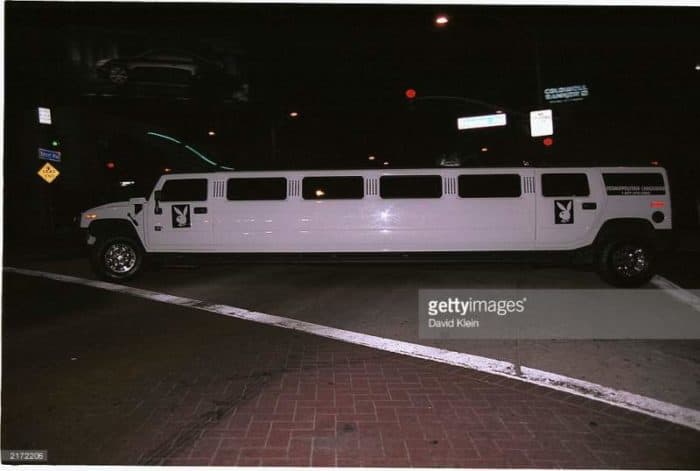 While you might guess that the H2 Stretch was dressed pretty in pink, it was actually a clean white slate with simple Playboy logos on the doors.

This one is a 16-seater limo with all the luxuries imaginable. It’s quite possible that Hugh and his Playboy Hummer Limo popularized the concept of the H2 limousine conversion, considering nearly every limo service nowadays offers one. If you can’t stand small cars, then this is the vehicle for you.

Ok, the Playboy car company was not actually a Hefner-owned car company. But the story linked with The Playboy Motor Car Corporation from Buffalo New York from the late Forties has been closely entwined with the Playboy Enterprise name. The history of the Playboy is a relatively short one: it was founded by Louis Horwitz, a former Packard dealer, in 1947. Joined by mechanic Norman Richardson and Pontiac engineer Charlie Thomas, the trio produced 97 production cars. The production model was a sports car (featuring a retractable hardtop) convertible, and the trio had plans to release a station wagon but unfortunately the company folded in 1951. 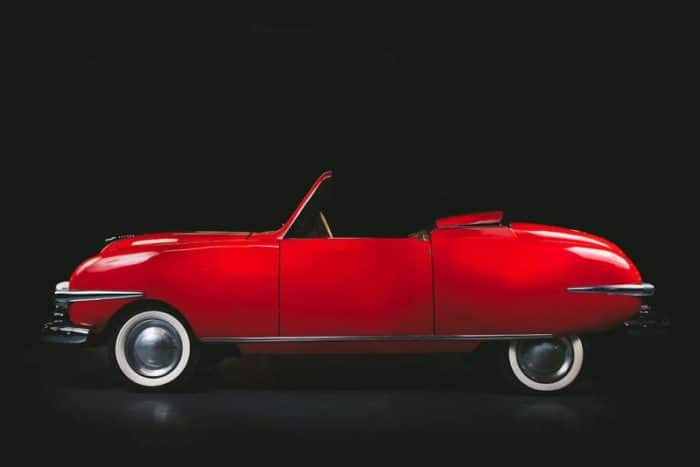 As the story goes, a woman who worked for the Playboy Motor Car Corporation in the Chicago Playboy dealer network sales office had a son who was friends with Hugh Hefner, the founder of Playboy magazine. As the Playboy Motor Company went out of business, Eldon Sellers and Hefner talked a lot about Hefner’s idea of launching a new magazine for men. It is not the official story, but it seems that Sellers suggested the name Playboy to Hugh Hefner and he liked it so much he adopted it. The rest is history. 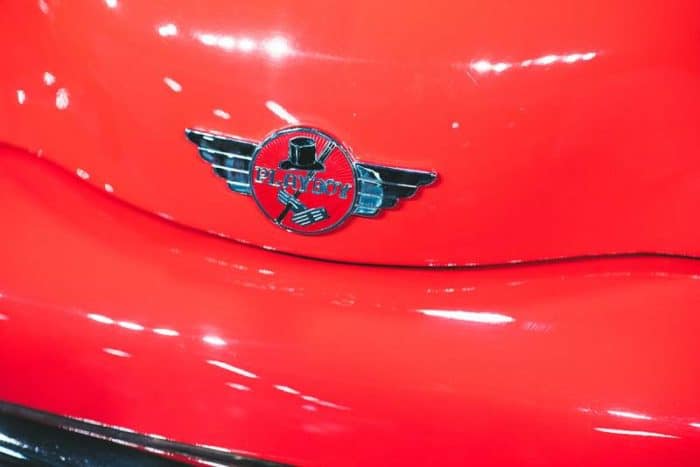 Today, if you want to know more about the Playboy Motor Car Corp, you’ll have to talk to Horwitz’s descendant, David Kaplan, who know all their is to know about the company, Playboy name, and models. If you want to see one of these ultra-rare vehicles you’ll have to scour the auto show and classic car shows, and you cross your fingers. They’re very rare examples of early car culture and even the most prestigious car show events seldom see the rare Playboy car!

Whether you agree with his views or not, Hugh was a gentleman with excellent taste and he will be sorely missed. Thankfully, he is leaving the world a much brighter place than he found it.