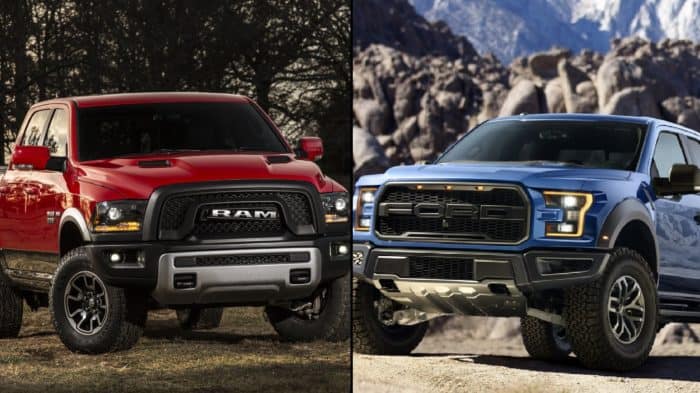 As the Chevrolet Corvette is the pinnacle of domestic performance cars, the Ford Raptor is similarly at the apex of domestic light trucks. But just as the Corvette may not be the best solution for every driver, the Raptor isn’t necessarily the best choice for every truck owner. In fact, given the choice, we’d take a Ram Rebel over a Raptor for our own driveway.

Yes, we know that the Ram Rebel will most likely be closer to the Ford X4 than the Raptor in specifications (or the Toyota Tundra TRD or Chevy Z71, for that matter). But this is our blog and we’ll compare whatever vehicles we like. 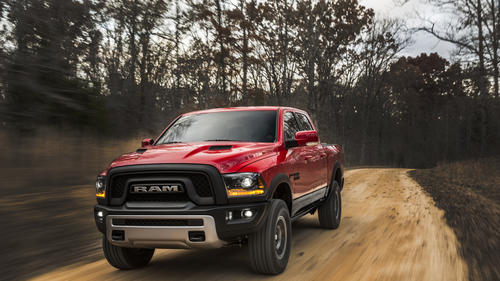 Reason one for choosing the Rebel over the Raptor is that we have no plans to cross Death Valley, run the Rubicon, or rock climb in Moab. So why pay for capabilities we’re not going to use?

Second, the Rebel  features an air suspension that gives it a little more ride height than the traditional Ram 1500, and has an off-road drive setting as well. The beauty part is that the factory air suspension if fully-integrated into the entire infrastructure of the vehicle, so there are no shortcomings like you might run into with an aftermarket system. Plus it’s just super cool to be able to raise and lower the ride height of your truck at will. Drop it own to order at the drive through. Raise it up to get to the campsite. 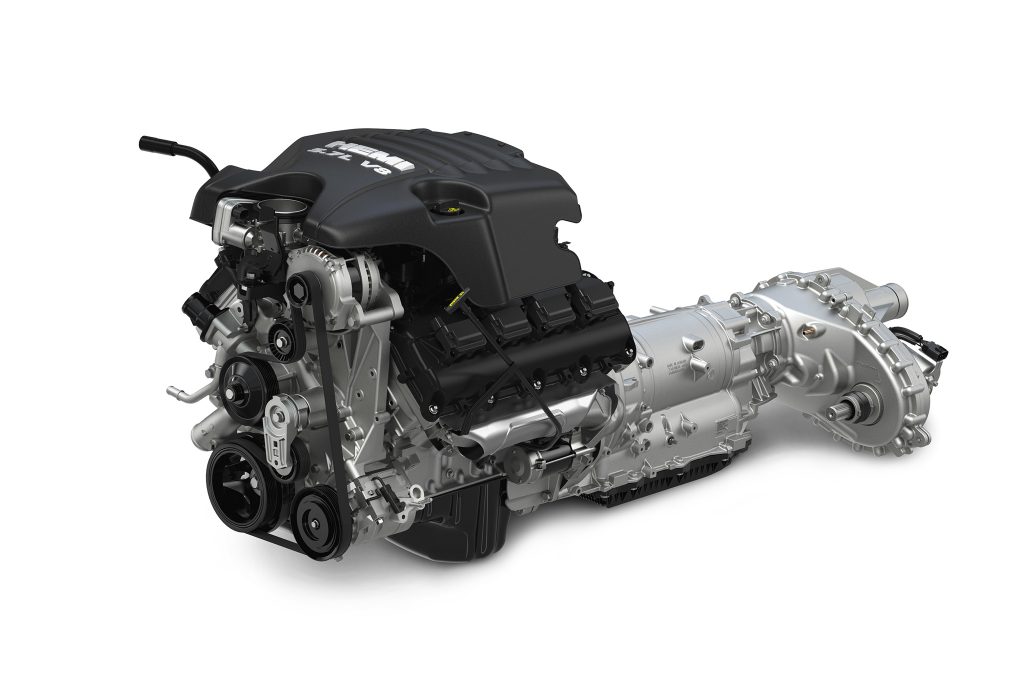 Third, motors: sure Ford has the fantastic twin-turbo V-6 that we all love so much (who wouldn’t?). But when you roll up in a truck and you’re asked what’s under the hood do you want to say “3.5 liter EcoBoost twin-turbocharged, dual-overhead camshaft vee-six” or do you just want to say “Hemi”? I thought so. Actual differences in horsepower and torque are negligible 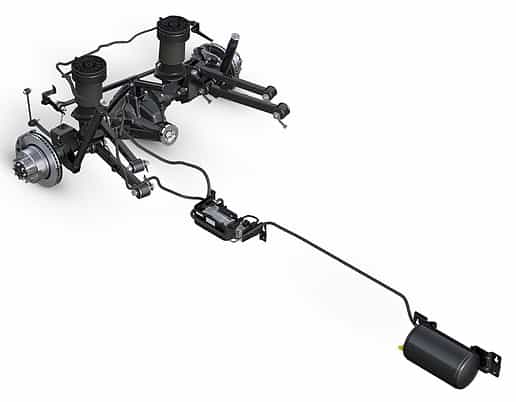 The Rebel will be available in either 4×4 or 4×2 configurations, and stiffer control arms, tuned stabilizer bar and other features will also improve the ride height and make it off-road worthy-ish. It’ll carry 17″ alloy wheels with 33-inch Toyo all terrain tires. Ford’s indicated that the 2017 Raptor will feature 17″ wheels and while the last generation featured 34.4″ tires, the 2017 Raptor could feature 35″ or 37″ tires. Who wants to have to use a step ladder to get into their own truck? 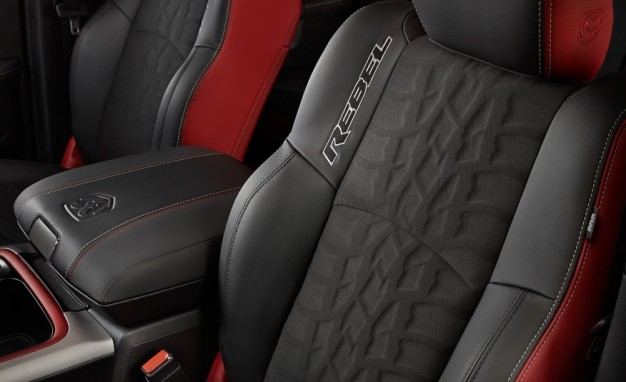 The drawback is that the Toyo tread pattern is embossed across the interior, which  means of course, that if you change over to Goodyear or BFGoodrich rubber you need to get  new seat covers. Who wants to ride in a truck where the seats and treads don’t match? 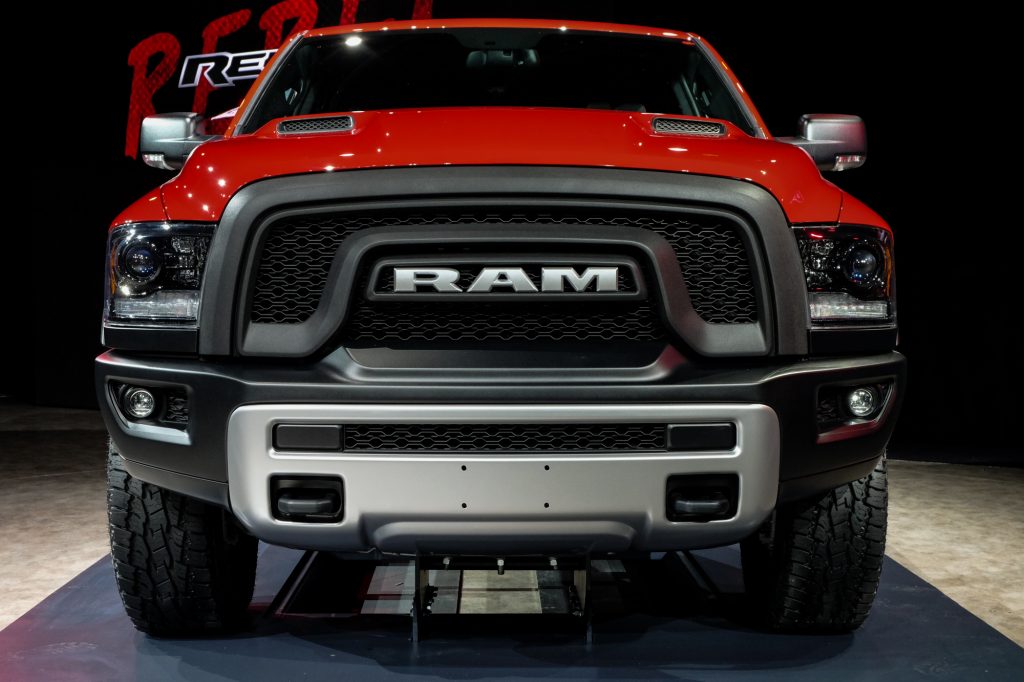 In the front grille department we have a draw. Between the giant FORD lettering across the grille of the Raptor and the smaller RAM lettering but in a much less attractive grille surround on the Rebel, it’s pretty much a toss-up between which is worst.  Is there a “Grille Delete” box to check on the order form? 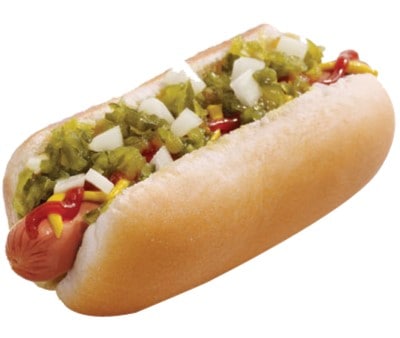 Pricing? Chrysler hasn’t set a price, but expect the loaded Hemi version to come in somewhere between $40K – $42K, while the Raptor is expected to come in around $44K – $46K. If it doesn’t sound like a great of difference to you, think of it this way: it’s the equivalent of 802 All-American Hot Dog Combo Meals at Sonic. Plus you can raise and lower the ride height of your Rebel as many times as you want while you wait for your dogs.