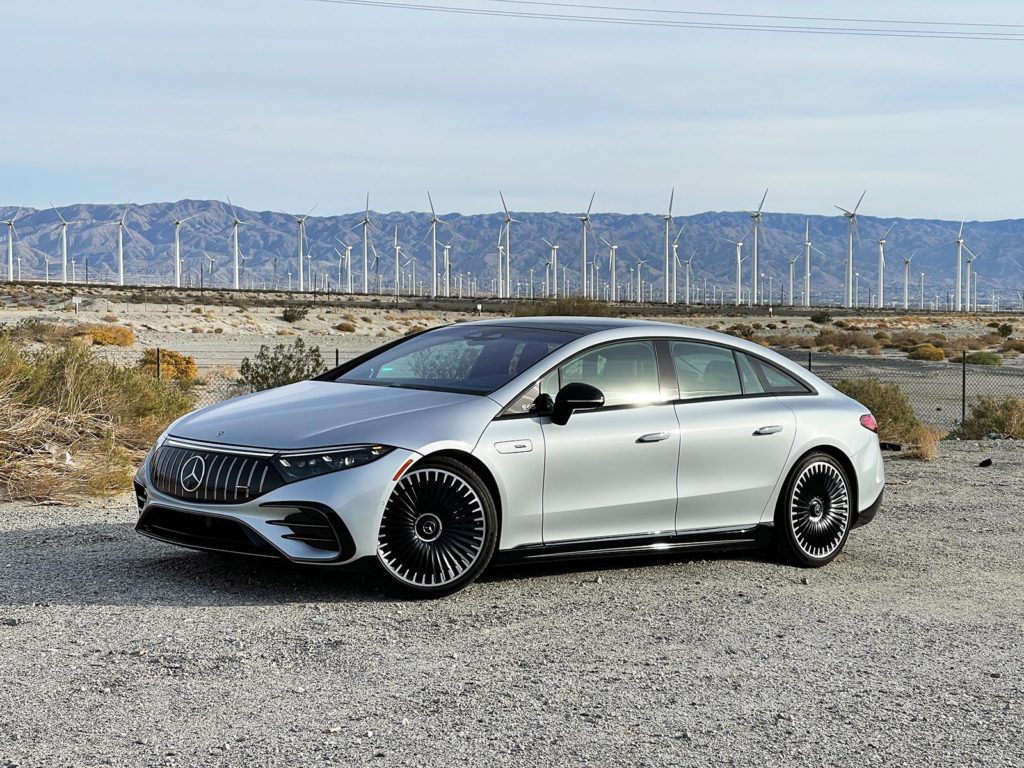 For just three letters, they carry a powerful meaning. Add “AMG” to any product from Mercedes-Benz and you transform luxury into the pinnacle of performance. Now, with the debut of the Mercedes-AMG EQS, the tuner brand sets out to work its magic with the German automaker’s first battery-electric vehicle to reach U.S. shores.

The EQS is the all-electric alternative to the familiar Mercedes-Benz S-Class, and features a distinctive, exterior design and a roomy, high-tech interior. It’s loaded with all the features a Mercedes buyer would expect, from the plush, diamond-stitched massaging seats to the Hyperscreen that stretches from pillar to pillar across the instrument panel.

Taking aim at the likes of Tesla’s flagship Model S, the first two versions of the EQS did fall a bit short when it comes to performance, at least when compared to Tesla’s own flagship, the Model S Plaid. The AMG EQS still doesn’t quite match 0-60 times of the Plaid edition. But, it more than makes up for it in terms of its overall driving experience – as I discovered during a day wandering through the San Jacinto and San Bernardino mountains between Palm Springs and Los Angeles. 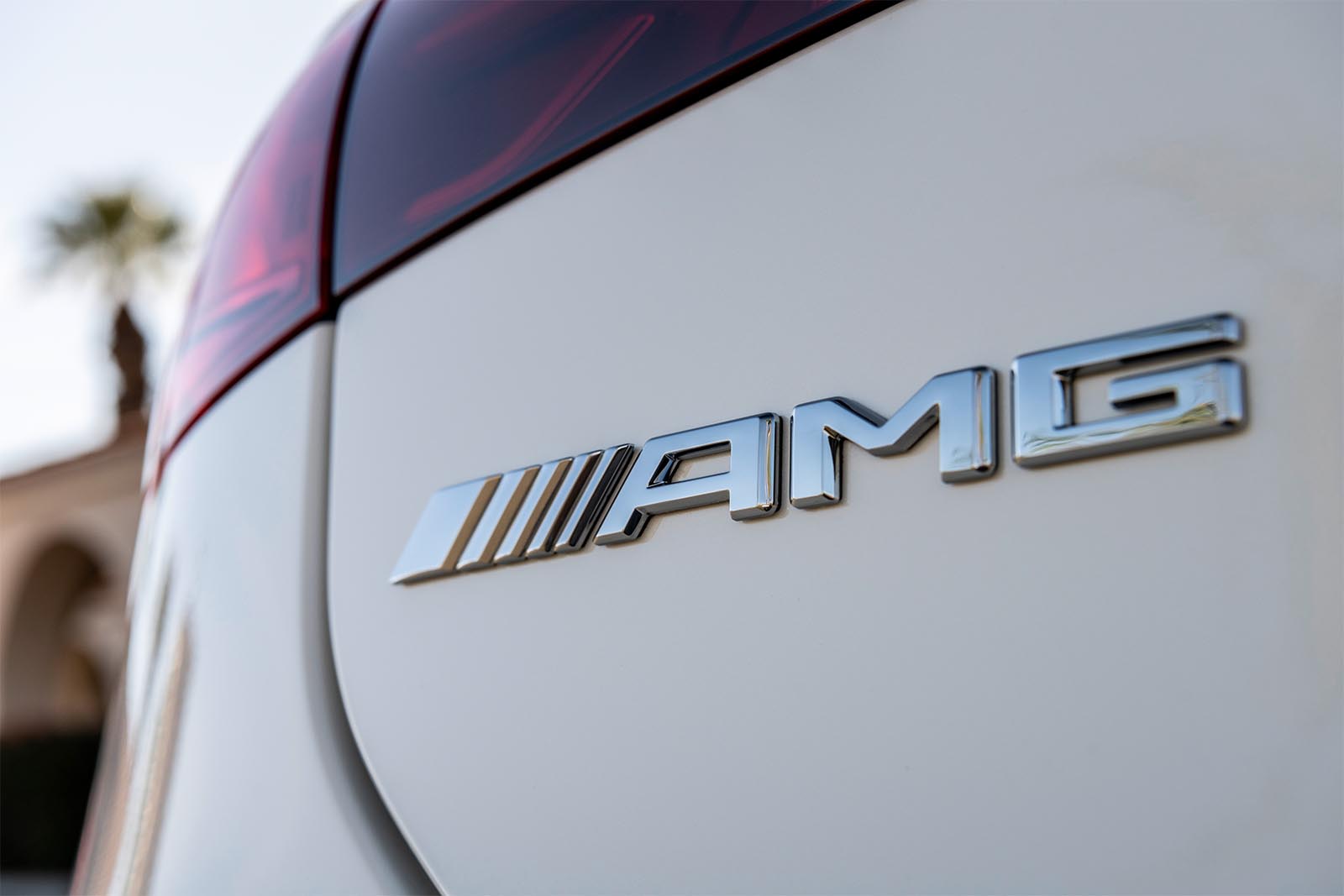 Not Just an Electric S-Class

The EQS isn’t just an S-Class fitted with batteries and electric motors. It starts out with an entirely new, skateboard-like platform that mounts most of the drivetrain – including a 108 kilowatt-hour lithium-ion pack under the flat load floor. That layout permits a unique, “one-bow” shape borrowing heavily from the automaker’s 2019 concept car, the Vision EQS. A single, curved line flows over the top of the sedan, from bumper to bumper, with only the most subtle deviation.

What looks, at first, like the familiar Mercedes grille is, in reality, a decorative plate highlighted by dozens of small, backlit Mercedes tri-stars. There’s no need for pushing air under the hood since there’s no internal combustion engine. That said, large intakes under the front bumper serve dual roles, helping to cool the sedan’s big battery pack and motors while also feeding air curtains reducing wind drag around the front wheels. Aerodynamics are critical to any battery-electric vehicle – all the more so for an AMG model where you want to boost performance, as well as range.

The EQS gets a handful of additional design tweaks, starting with an A-wing up front, a large rear diffuser, and a 6-fin diffuser under the back bumper. Buyers can choose between three different 21 and 22-inch wheel designs, as well. 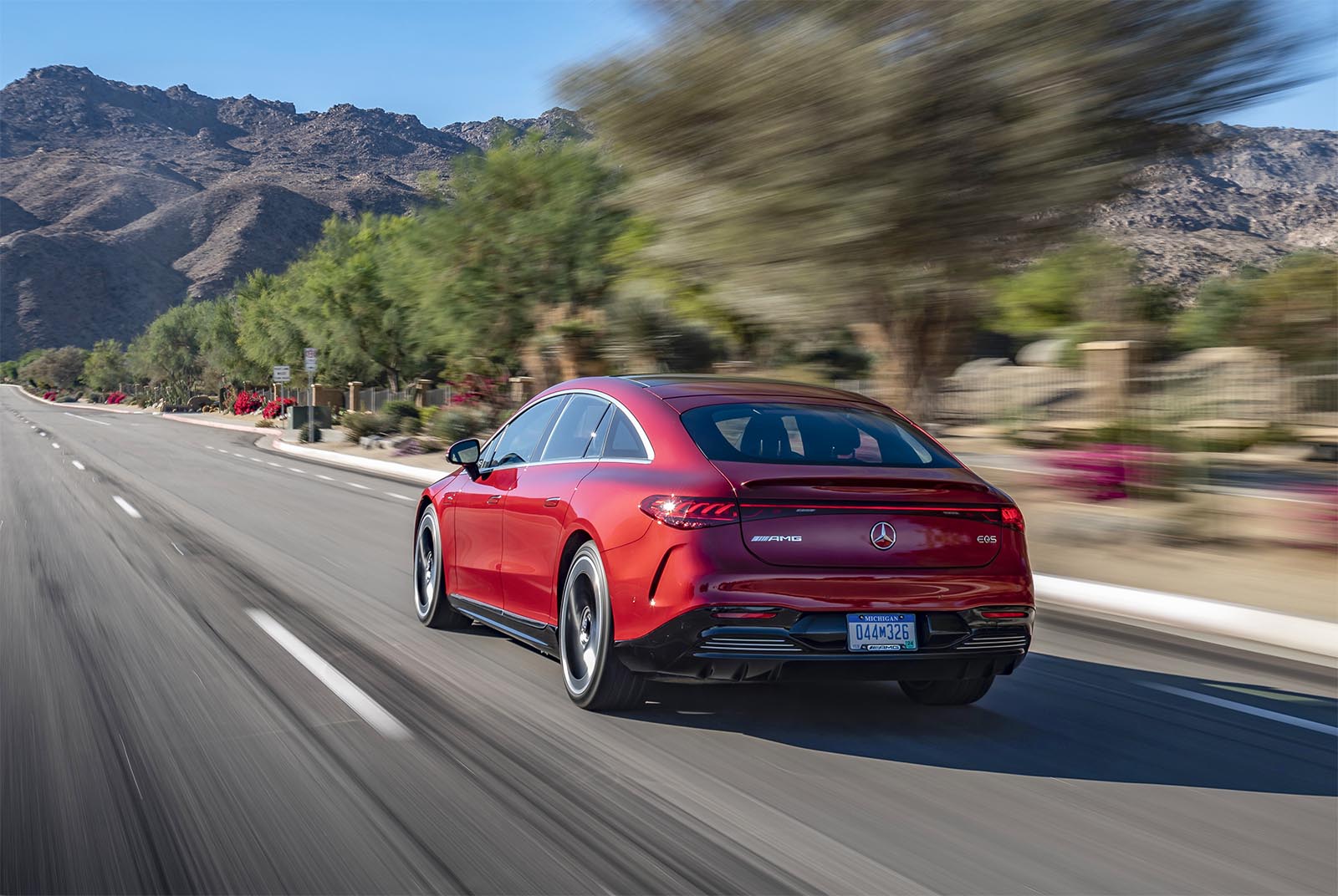 Taking Luxury Up a Notch

Like the more mundane Mercedes-Benz EQS 450+ and EQS 580 4Matic, the AMG EQS doesn’t scrimp when it comes to luxury –indeed, adding pretty much all the top-line options. There’s plenty of legroom, front and back, as well as a cavernous trunk — enhanced by the ability to steal space normally devoted to an engine compartment. And, with no drive tunnel, the EQS features a flat floor. That said, there are a few compromises, notably when it comes to rear headroom, due to the one-bow design.

One other quirk is the oddly high position of the digital gauge cluster and steering wheel, a layout that cuts into your line of sight, visibility already slightly intruded upon by the way the one-bow roofs flows into the steeply raked windshield.

Like the EQS 580, the EQS 53 gets plush, comfortable, and lavishly appointed seats – here with AMG covers and embossing. But they’re also more supportive, keeping me firmly in place as I charged through even the most aggressive of corners. 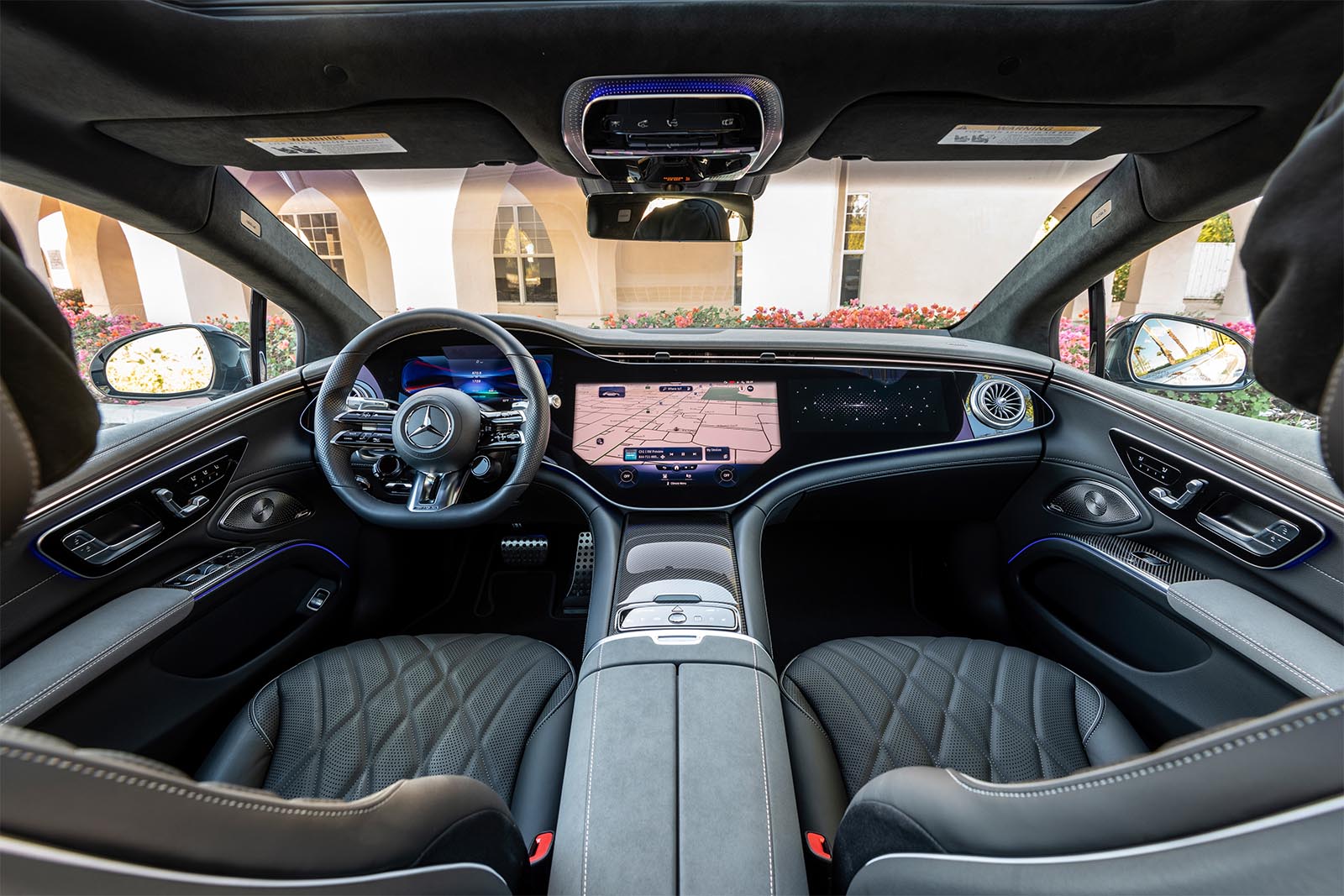 The most distinctive feature, however, is the 55-inch Hyperscreen that comes standard on the AMG version of the battery-electric vehicle. A curved glass panel actually overlays three separate screens, starting with a 12.3-inch gauge cluster. The horizontal infotainment display stretches on for another 17.7 inches. The front passenger gets a smaller touchscreen above the glovebox that can be used to watch videos or duplicate much of what comes up on the center screen, including a smaller navigation map.

My EQS tester also featured a head-up display that projects its image about 30 feet ahead of the sedan. It can display a variety of different images, including an augmented reality, or AR, setting that places arrows onto the road to help you see where to turn when using the onboard navigation system. I expect most drivers will opt for the setting that projects real-time data on performance and range.

And, when it comes to performance, the EQS has nothing to apologize for – even if it can’t do a dragstrip burnout quite like the Model S Plaid. Depending upon the drivetrain option, it still hits 100 kmh (62 mph) in a neck-snapping 3.4 seconds, with a rated top speed of 155 mph.

At its most basic, the AMG EQS makes 658 hp and 700 lb.-ft. of torque. But the standard AMG Dynamic Plus package briefly punches that up to 751 hp, with torque jumping to 752 lb.-ft. when set to Race Start mode.

The AMG edition adds an upgraded cooling system compared to the standard Mercedes-Benz EQS line. With one motor on each axle, you get an electric alternative to the mechanical 4Matic all-wheel-drive system. Power, however, is normally biased towards the rear, just like the conventional package.

On my way to Palm Springs, I had the chance to drive the new Mercedes-AMG SL and one of the roadster’s most delightful features is its V-8 growl. For performance fans, the lack of an internal combustion engine’s exhaust note is likely to be the single biggest downside of going electric.

Mercedes came up with an intriguing solution when it launched the EQ 450+ and 580 4Matic models earlier this year, introducing three soundscapes, artificial soundtracks that aim to create a high-tech alternative. With the AMG, you get two additional “Sound Experiences” playing inside and out. No, even the one called “Performance” doesn’t really replace the addictive roar of a V-8 under wide-open throttle. But they do become addicting after a while.

One of the other welcome changes from the more mundane EQS models is the addition of a 1-Pedal  mode. It works much like downshifting a manual transmission several gears, slowing the car substantially when you ease off on the throttle. Winding through the mountains, I found myself having to go to the brake only occasionally. And, as I got back closer to Los Angeles, I was able to come to a complete stop in traffic using the 1-Pedal system. For the rare few folks who might not like this, it’s easy to return to a more conventional regenerative braking mode. 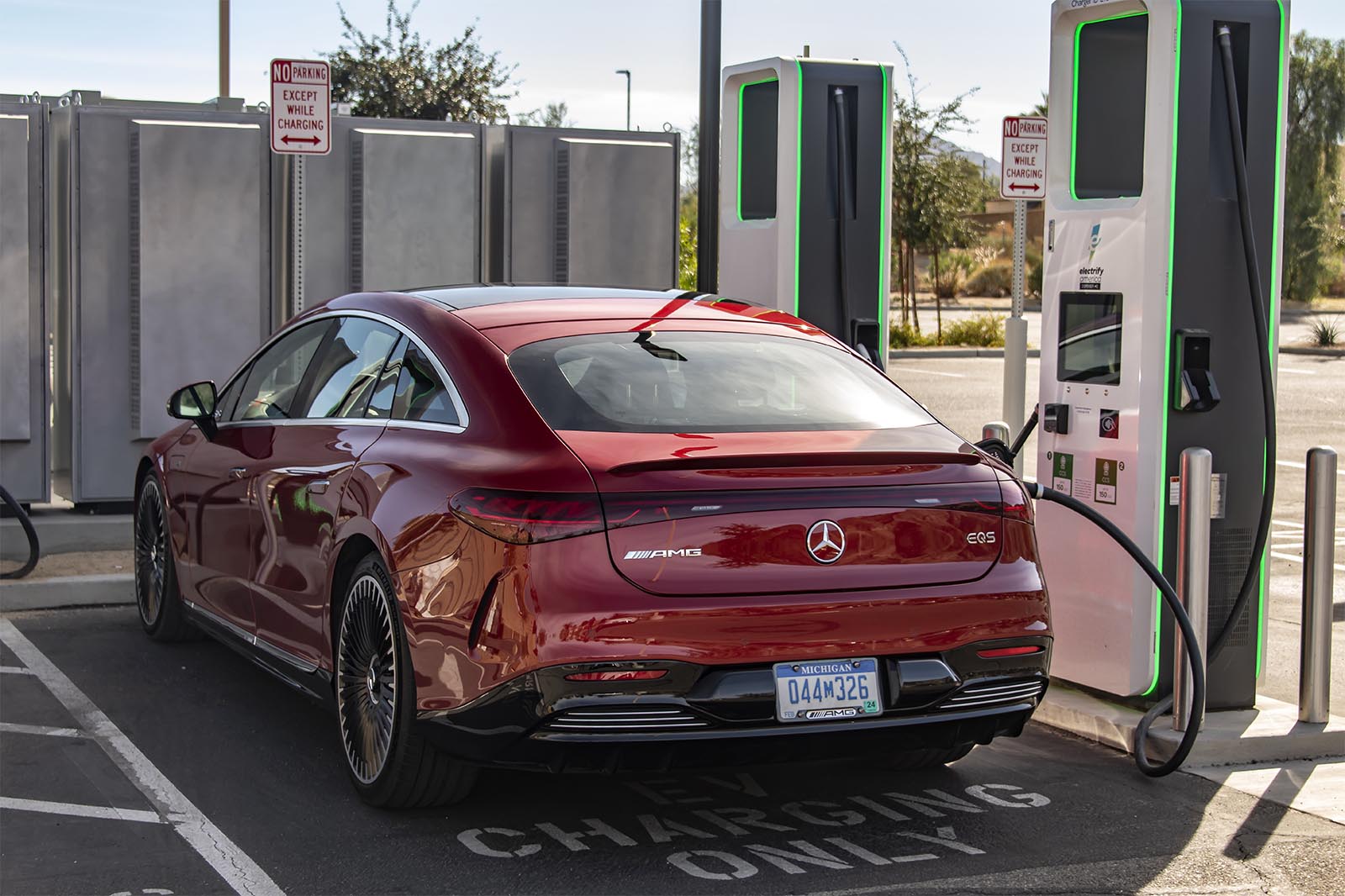 The big sedan draws power from a 107.8 kilowatt-hour lithium-ion battery. In the standard-issue Mercedes-Benz EQS 450+ you can get as much as 350 miles per charge, according to the EPA rating. (It dips to 340 miles with the EQS 580 4Matic.) You’ll take a sizable hit with the EQS 53 4Matic+, with a max 277 miles per charge. And, of course, that can be impacted by a variety of factors.

Driving hard will pare back the numbers, as will operating in extremely cold or hot environs, an EV’s climate control sucking up lots of energy. That said, I was pleasantly surprised by the range my test car received which, based on the percentage left as I dropped it off at LAX, would have come in around 250 miles. Not bad considering how aggressively I drove. It helped that the 1-Pedal brake system picked up a lot of energy descending out of the mountains.

Of course, you eventually will have to find a place to plug in. Data show at least 80% of EV owners charge at home, and that big battery pack will need a full night if you’ve drained it all the way down. The high-voltage electrical system on the EQS lets you power up using the latest public quick chargers at up to 200 kilowatts. You can get a “top off” of 180 additional miles in as little as 19 minutes, Mercedes claims. 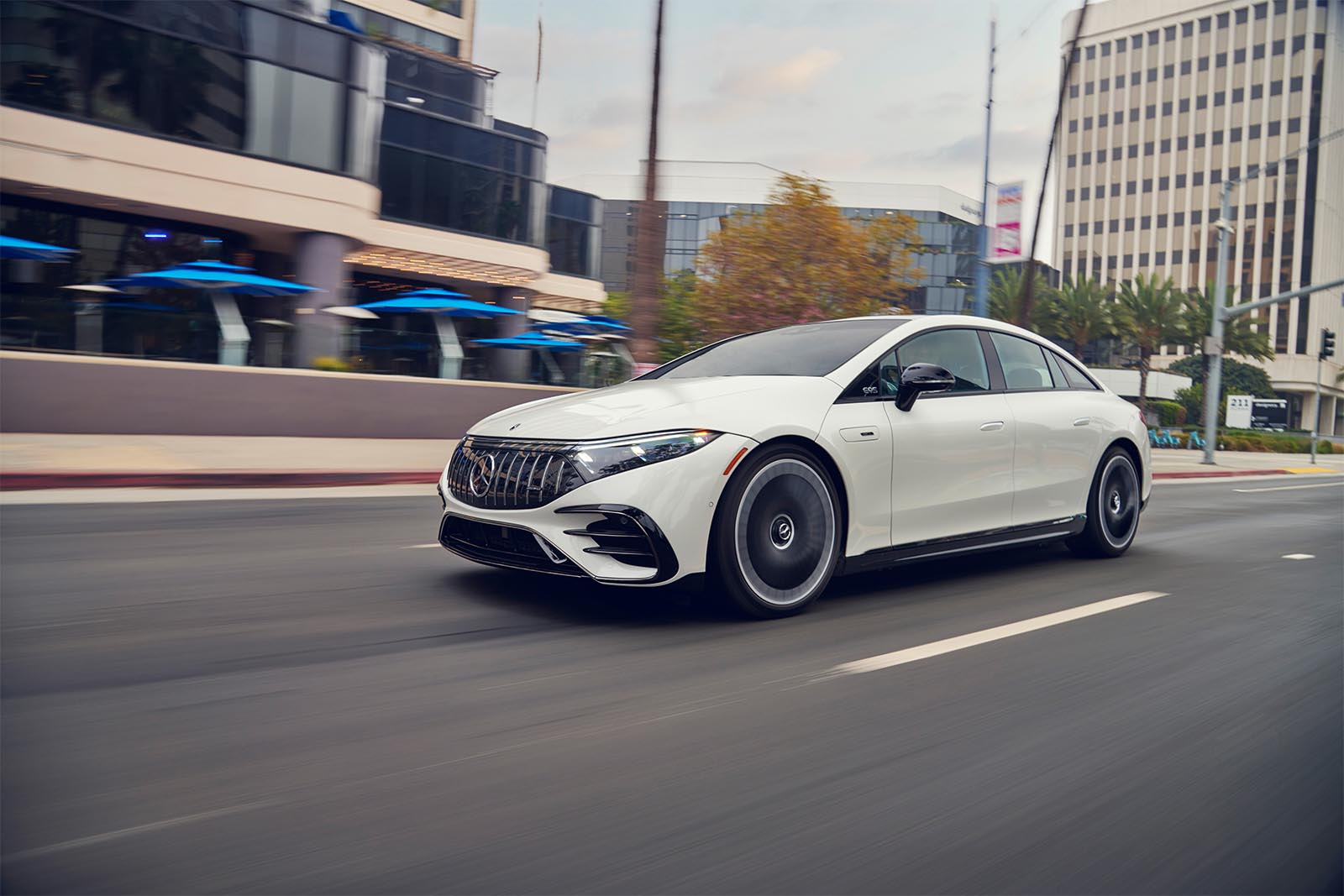 One of the challenges when writing about an EV, is using numbers to tell the story. Acceleration is a case in point. There’s no question the AMG edition is quick, at 5.3 seconds 0-60 with the Dynamic Performance Pack. But that doesn’t tell you how tire-spinning torque comes on instantaneously, with none of the ramp-up in power from a traditional, internal combustion engine. And, with a single-speed transmission, power keeps flowing, without interruption, all the way up to triple-digit speeds.

Then there’s the electric sedan’s raw mass. AMG hasn’t released final figures on the AMG EQS but the 580 4Matic comes in at 5,888 pounds, more than a half-ton heavier than the familiar Mercedes-Benz S550. You clearly recognize the extra mass while flogging an EQS – in any form – around corners. But by moving pack and motors down under the load floor, the electric sedan actually has a lower center of gravity than the gas-powered S-Class.

Now, add the AMG battery-car’s air suspension and electronically adjustable damping, as well as smart AWD system capable of reading and moving torque where needed up to 10,000 times a second. What you wind up with is a car that is delightfully nimble when it comes to cornering. No, I couldn’t charge through turns as quickly as I did the day earlier in a new Mercedes SL, but the AMG EQS was significantly more fun to drive than the base BEVs, and more than entitled to wear the AMG badge. 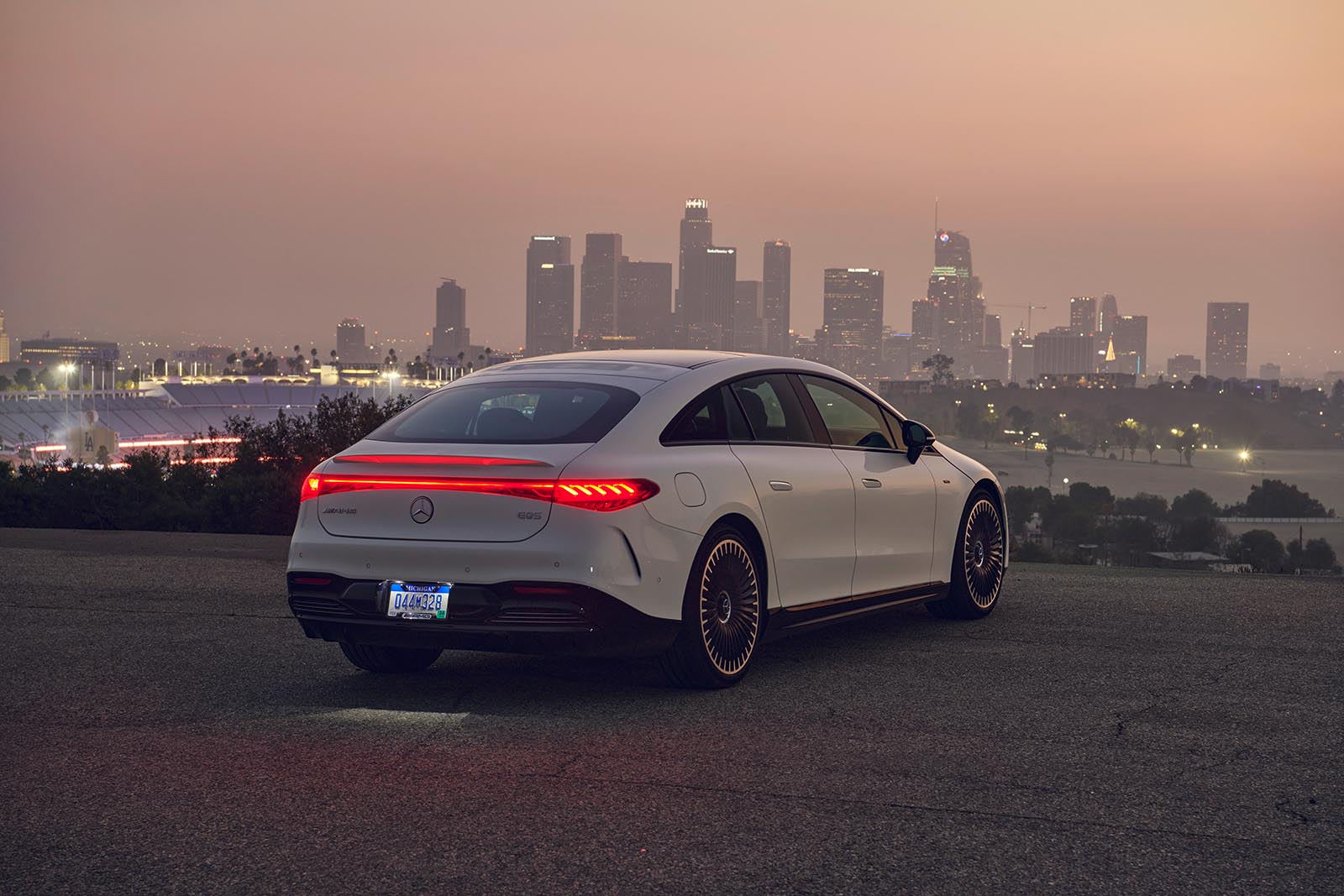 The original EQS models proved truly worthy of wearing the Mercedes-Benz tristar. The updated performance model is even more clearly worthy of an AMG badge. Like the original EQS 450+ and EQS 580 4Matic models, there are some flaws, but the AMG also addresses some of those flaws, especially with its smart suspension system.

Tesla clearly needs to be watching over its shoulder now that the 2022 Mercedes-AMG EQS is getting ready to roll into showrooms.